Georgia, a small country that forms part of the Caucasus, is best known for its unparalleled natural beauty. Situated at the crossroads between Western Asia and Eastern Europe, it is a melting pot of different religions and cultures. Therefore, it is no surprise that the capital of this magnificent country has recently become the focus of the fashion world in the shape of Mercedes Benz Tbilisi Fashion Week. The biannual fashion week got its start in 2013 through hard work and resilience on the organisers’ part. Promoted by the great and good of Tbilisi, the event has since turned into a cult fashion destination in the world fashion calendar.

The 2015 Mercedes Benz Tbilisi Fashion Days took place in May of this year. Founder of Atelier Kikala, designer Lado Bokuchava, created a collection which merged Japanese graphics and Knitwear to create striking silhouettes, while Ukrainian Przhonskaya showcased structured pieces using a mixture of wool, cashmere and silk. Russian designer Alexander Arutyunov dressed models in garments that reinterpreted pop and contemporary elegance of the ‘20s and ‘30s, giving the whole collection a very fun, feminine and retro feel. A vivid red gown with gold and pearl beadwork formed the stunning show stopping piece. Lilia Poustovit is a Ukrainian designer who is known for her iconic prints and dresses. Her collection is known for flattering silhouettes and perfect cuts. This season, Poustovit played on her signature designs by combining the flirty pieces with grunge creating a perfect contrast. Lilia Litkovskaya presented a collection that blended minimalism and urban groove. The collection can be viewed in Sergey Morgunov’s video Carousel 4.20, further emphasising the restless beauty of the pieces. Add to these the post apocalyptic world of David Sulikashvili, with his collection that looked and felt very strong and female centric; the minimalistic monochrome inspired designs by Tamuna Ingorokva, which highlighted all things cultured and elegant and the feminine silhouettes by Lake Studio and you get a cohort of very talented designers adding to the already rich pool of talent that Tbilisi fashion week has to offer.

However, the Caucasus is not the only region where Georgian designers are making their mark. Two Georgian designers have already gained international fame and recognition. David Koma, an alumni of Central Saint Martins was a former student of Louise Wilson. He was appointed the artistic director of Mugler in 2013 following on from the success of his own label. Tata Naka was created by twin sisters Tamara and Natasha Surguladze, and their colorful creations are sold in the best stores worldwide. Lako Bukia graduated from the M.F.A. course at Parsons and is already thought to be on LVMH’s radar. Their success has hopefully opened the doors wider for fashion designers from Georgia and beyond.

Alongside the official fashion week calendar, there were also exhibitions of ARTGeorgia and BENEXT (a brainchild of Sofia Tchkonia) which is dedicated to the development of contemporary art and local artists. The fashion contest BENEXT found by Sofia for young talents and emerging designers from Georgia and surrounding countries, awards scholarship and grants to participants so that they can attend fashion schools worldwide. This year Yana Chervinska won a grant for studies at Lisaa L`institute Paris and fellow Ukrainians Frolov and Nadiya Yurkiv became participants of BENEXT Showroom Paris. As part of ARTGeorgia, Rad Hourani presented his exhibition ‘5 year of Unisex’. It is a 5 year retrospective of Rad Hourani design and revealed ‘the social content of his vision, which he actively expresses in photography, design and film’. With the array of talent observed, it is evident that the Mercedes Benz Tbilisi Fashion Week is one to watch. 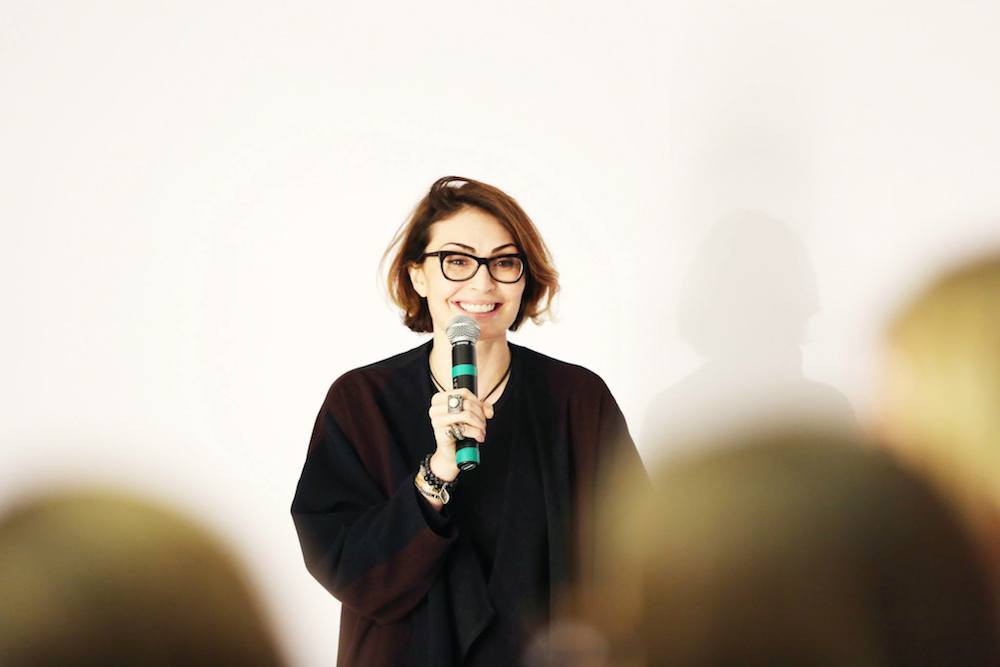 As the founder of ARTGeorgia, BENEXT and founding member of the Tbilisi Fashion Days, there is no one that has more insight into the Tbilisi fashion scene than Sofia Tchkonia. Sofia, who divides her time between Paris and Georgia is described on her official website as constantly ‘looking for new and fruitful partnerships between the worlds of fashion and art’. Here, Schön! speaks to Sofia Tchkonia herself to find out more about Tbilisi fashion week, her extraordinary career and her passion for art and fashion.

You were born in Georgia, studied in Germany, USA and France and currently reside in Paris. Has living in different parts of the world and experiencing multiple cultures aided in shaping your career in the fashion industry?

I was born in Soviet Georgia, which was a completely different country, not as it is now. There was no fashion in Georgia but my mother and her generation somehow managed to look very elegant and stylish. The only connection with the Western world for them was through movies. Mostly French and Italian movies, so they were inspired by Catherine Deneuve, Anouk Aimee, Sofia Loren… my passion for fashion started from my mother and films.

At what point in your life did you realise you wanted to work in Fashion and how did you get your break in the industry?

I’ve studied cinema. I always paid attention to little details and was always interested in costume designers of movies. I used to collect fashion magazines when I was a teenager and have always wanted to work in fashion…fashion and films. I don’t remember the moment I started to work in fashion. It happened by itself at one point.

You have interviewed many very famous faces within the fashion industry including the likes of Yves Saint Laurent, couturier Madame Carven and Hervé Léger. Has anyone in particular left a lasting impression and why?

All the personalities I’ve met and interviewed left huge impressions on me. I remember every word they’ve told me. Pierre Bergé is such a charismatic person that you can feel him before he enters the room and he is such a wise man. Madame Carven was a hundred years old at the time I interviewed her, Hervé Léger became a great friend. So every single person gave me something. I continue to work on this project and learn valuable lessons from the people who’ve inspired and created 20th-21st century fashion, art and film.

When you first started organising the fashion week in Georgia, did you envisage that it would be what it is today?

I never thought about organising fashion week in Georgia but at one point I saw that fashion in Georgia is not moving forward though we have so many talented people! Besides that I love my country and would love to show it to as many people as possible from around the world. I want to make it a centre which unites talents and creatives. So I decided to create the events, fashion week, fashion design contest and ARTGeorgia which is more about arts. It was first season of fashion week and I know that there is so much work to be done to make it much more interesting and attractive to professionals. But I am never afraid of risks and work.

You have stated in the past that security and stability issues have had an effect in the development of luxury brands (both local and international) in Georgia. Do you think that this is an ongoing issue or has it been resolved somewhat?

It is still very difficult to organise such a project in Georgia. Unfortunately, we still are not so stable a country and there is no development of the fashion market. We need more support from the government and companies. Unfortunately we have to fight alone without any precise support but hope that in near future there will be a lot of positive changes.

The Georgian fashion scene, in the last 5-6 years, has had what can only be described as a meteoric rise. Why do you think the Georgian Fashion week, designers like David Koma and brands such as Tata Naka have had such universal appeal?

Georgia is small country but we have so many talents and you can see how successful they can become when there is trust and support. I am proud of David Koma, he is very good friend of mine and I think that his success is the success of Georgia too. The same goes for Tata Naka. They’ve studied and live abroad but I think that their Georgian roots were never lost.

Bright prints and eclectic accessories ruled the streets of Georgia Fashion week. From a sartorial perspective, what sets apart the Georgian woman from the rest of the Caucasus?

Georgian women love black! We all wear mostly black but I am seeing more and more bright colours in the streets of Tbilisi. Also, I saw very colorful collections on our Mercedes Benz Fashion Week Tbilisi. Georgian women are quite original; they love fashion and don’t like vulgarity. I think Caucasian women are different from the rest of the world.

Where do you see the Georgian fashion scene heading to in the future?

Hopefully, we will become more integrated into the world of fashion and Georgian designers will become more successful and well known. First of all, we need good fashion schools in Georgia and good education. On my part, I will do my best to help and support.

You have recently organised the ARTGeorgia Paris event where you hand selected 27 emerging designers and artists from various parts of the world to exhibit their work. Tell us a little bit about the event.

ARTGeorgia was born in Paris three years ago. My idea was to show the best artists and designers from my country. The first exhibition was so successful that more countries expressed their desire to take part and it became more international. Most of the participants are young artists and designers and the main requirement is the talent, creativity and an interesting idea. After Paris, I decided to organise in Tbilisi too and hope that in the near future more and more cities will appear on our map. It’s the place where creative minds can show their talents and ideas to the fashion and art experts and promote themselves without any restrictions.

You are constantly promoting artists and designers from countries where they may not necessarily have the same support to showcase their work. Why is it so important for you to give artists and talents from the emerging part of the world this platform?

I love talent and talented people. When I see something really interesting and see that the artist or designer needs help or support and I can help, I just do it and never think about what I will get from this. It does not matter what religious beliefs, sexual orientation or country they are from. I think we are in this world to help, share and love.

Lastly, what would be your advice be to these up and coming artists, designers and fashion editors?

Love what you do! This quote by Confucius must be your motto, “Choose a job you love, and you will never have to work a day in your life.” And if you can help, just help.