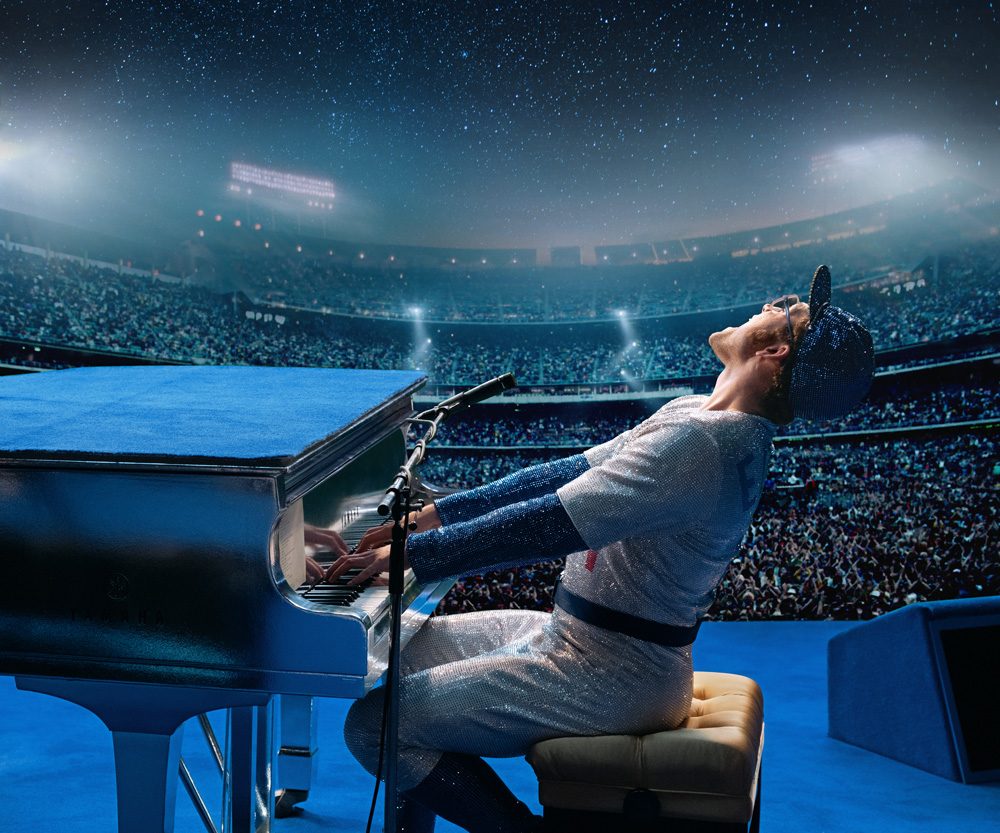 One of the most hotly anticipated films of the year, Rocketman is a musical fantasy version of Sir Elton John’s early life, rise to fame and battle with addiction. As well as the perfect soundtrack and standout performances from Taron Egerton, Jamie Bell, Richard Madden and Bryce Dallas Howard, the movie is a visual feast. Costume designer Julian Day has an impressive resume that includes Bohemian Rhapsody, Diana and Rush, but Rocketman is arguably his most epic project to date. Schön! finds out how he rose to the challenge.

Sir Elton is so famous so you must have had a lot of reference material to draw from, but does that make it easier, or does it add more pressure?

I’d just finished another film, Bohemian Rhapsody, and a lot of people will compare the two but they’re worlds apart: one is a straight-up biopic and fantastic, but Rocketman was from the outset a fantasy musical. It was never going to be a straight representation of Sir Elton’s life. There are thousands of images but we looked and it all and were like, “Let’s take this as a base but we’re not going to reproduce every single costume verbatim. We’re going to make this the most spectacular film we can do.”

Dexter Fletcher, the director, gave us carte blanche to do what we wanted and go further than we needed to, so you could always pull it back, but we never did! When you’re trying to represent someone of such huge stature, you’ve got to make it big, exciting and interesting. Hopefully, that’s what we’ve done.

I must ask about the devil costume in the opening scene, which Taron also wears for a big chunk of the movie. So, that’s not a replica?

No, none of them were, apart from the Dodgers [costume] and that’s our interpretation of it because that was sequins and mirrors, whereas we’ve used Swarovski crystals. It glistens and glitters much more. I wouldn’t want to say it’s more fabulous, because the original is fabulous, but in terms of the cinema experience, it gives a little more shine to it.

But the devil was the very first costume I designed for the film. It was the idea that Elton was at his most desperate. The additions were raging within him, so he was like a little devil, but at the same time, he wanted to fight the demons. When you look at the costume, there’s heart-shaped sunglasses, the heart shape of the headpiece, the wings – he’s just looking for love, basically.

Then we started thinking about how it’s going to work in the environment because he’s got to come through these doors, get in a taxi and the wings get everywhere.  So, we had two pairs designed, one that was solid and one that was a soft pair so when he got in the taxi they would collapse. I think he was quite hot, filming in the middle of the summer wearing two thick layers of Lycra, a headpiece, sunglasses and platform boots, but Taron is an incredible person. He put it on, got on with the job and just excelled. 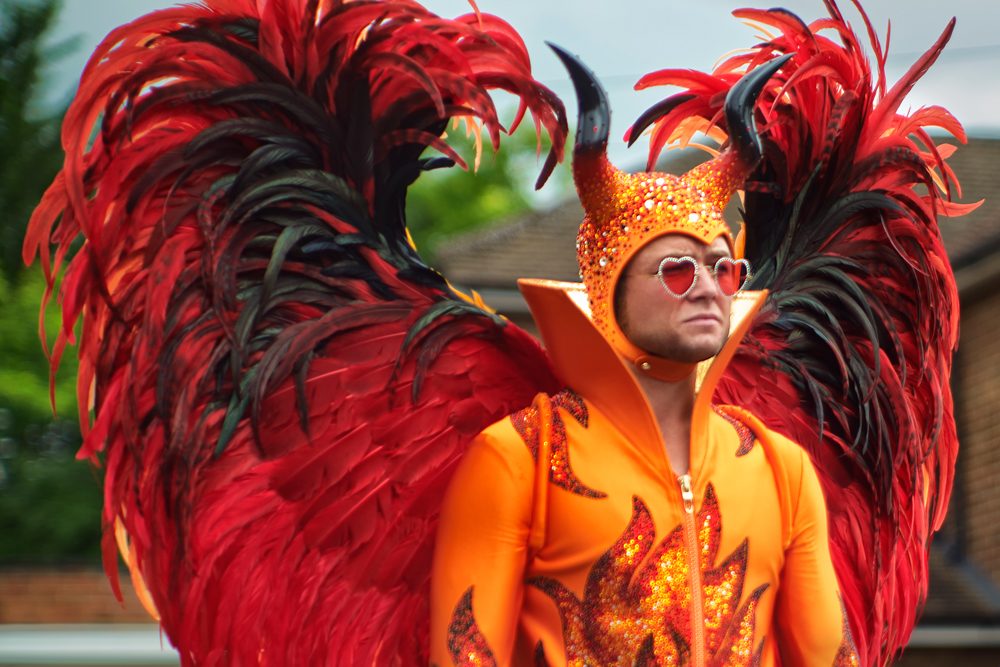 When an actor’s portraying such an iconic person, the costumes must be so important.

He had the biggest pressure and I wanted to make sure Taron felt comfortable. There’s nothing worse for an actor to walk on set and feel uncomfortable in what they’re wearing. If you’re hot in it, that’s one thing, but to feel not in your character, then that’s the worst thing I could do to an actor.

I was doing a fitting today with an actress and at first, she bustled in and said, “I’m not wearing this, I’m not wearing that,” but she walked out saying, “I’ve found my character.” It’s not just about the clothes. It’s about being a psychiatrist, a counsellor. Ironically, the first thing an actor does when they walk in the room is take all their clothes off because you’ve got to put clothes on them. They’re bearing everything, their whole soul to you, so you’ve got to help build them up, help them create their character.

I read that Taron prefers to be as naked as possible…

He did not have a problem with that [laughs]. I put him in some quite skimpy outfits and very tight, Lycra shorts, but he was game for it. He loved it. 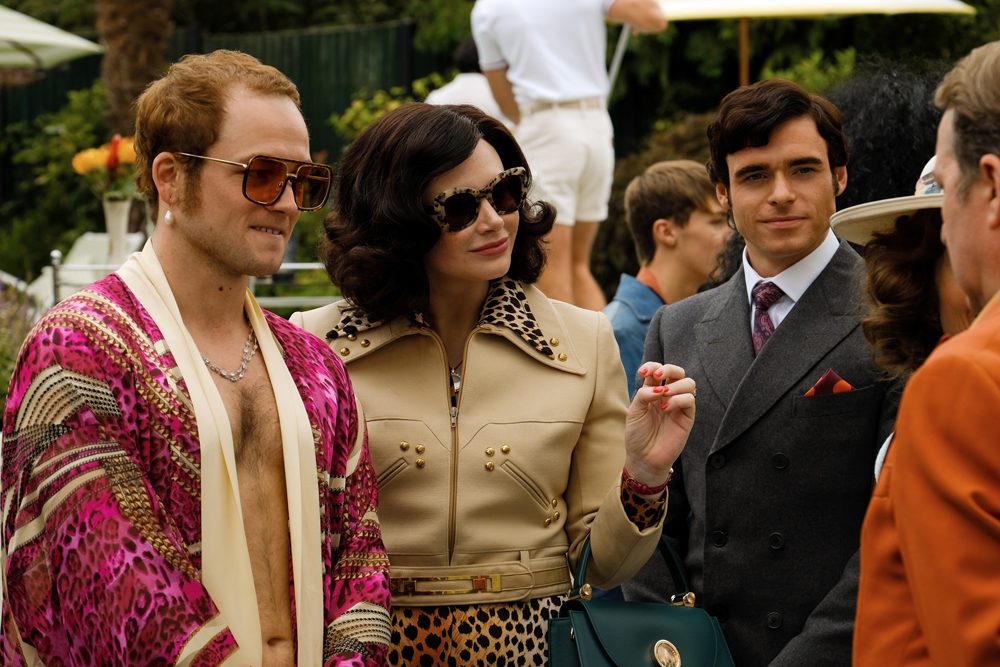 On Bohemian Rhapsody you commissioned some brands and designers to replicate Freddie Mercury’s clothes. Was there any of that with Rocketman?

There was some Gucci. They were very kind because they’d done a collaboration with Sir Elton and reproduced some of his clothing, so we got them to make things for the film and used some of their sunglasses. We worked with Chopard. Their jewellery’s incredible. Obviously, we used Swarovski crystals, literally for everything, one million of them. I think it’s actually one million and one [laughs].

The film covers several decades. Is there an era that you most enjoy working with?

I love clothes, so it doesn’t bother me. I’m working on a 1930s film and I’m really enjoying that. The ’70s is actually just the ‘30s replicated. A film about Studio 54 would be incredible.  New York in the ‘70s would have been extraordinary to live in, IF you were rich and famous and beautiful [laughs]. I think that would be the place I’d like to go and design a film for.

‘Rocketman’ is in UK cinemas from 22nd May and in US cinemas from 31st May. For more information, click here.