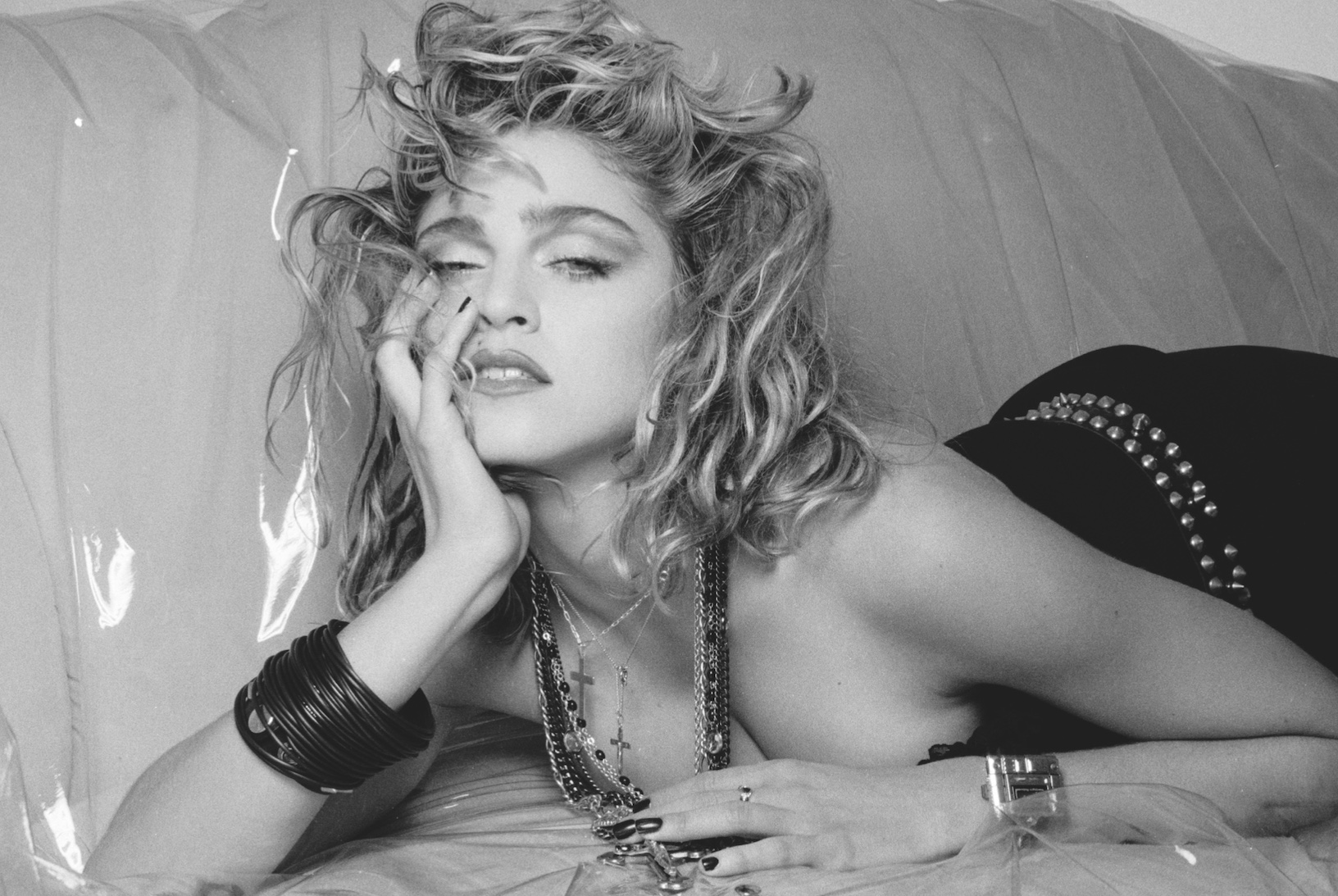 Madonna — an ‘80s icon, a supreme musical talent and a timeless reference point for both beauty and fashion. For many creatives, collaborating with such an accomplished figure would be a career-defining dream. This dream became a reality for Japanese portrait photographer Kenji Wakasugi when he was commissioned by Playboy Weekly Excite to photograph the young singer during her ‘Like a Virgin’ promotional tour. Today, audiences can see those images in full for the first time in ‘ADORE’, the new book from publisher NJG Studio.

Amidst the haze of 1985’s Tokyo, and with only 45 minutes to spare, Wakasugi and Madonna embarked on a shoot which would capture Madonna’s enchanting aura and perpetual beauty. After 36 years, these images — most of which have never been shown to the public — are finally being published in the form of 800 limited edition books.

‘ADORE’ offers a glimpse into the iconic, chaotic and truly wonderful world of the pop-culture phenomenon during her climb to stardom. The photographer, along with NJG publisher Nick Groarke, sat down with Schön upon the release of his book to discuss everything from the inspiration of the shoot to nature and future projects.

First, introduce us to the book. What inspired you to choose the title ‘ADORE’?

Nick Groarke – NJG Studio: ‘ADORE’ is the complete document of a photoshoot which happened 36 years ago. It features many unpublished photographs of early era Madonna – originally commissioned for Playboy Weekly Excite. Only six images were used by Playboy; the rest were stored away in a yellow Kodak photo-box until now. We wanted a strong title that would reflect the attitude and dynamism of the photographs, Madonna’s beauty and her fashion sense from that era, which is now iconic. 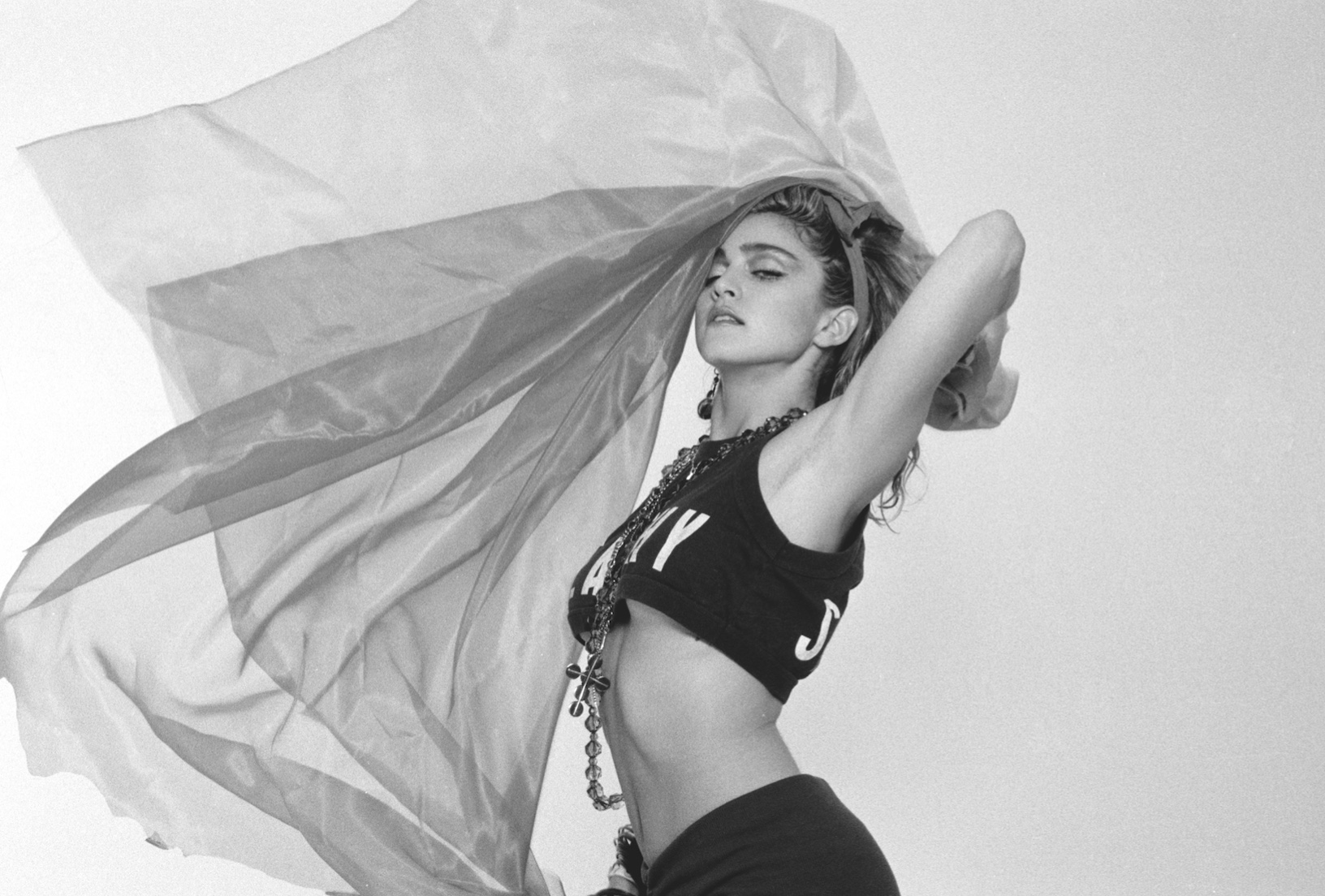 Why did you return to these photos now, having taken them 36 years ago?

Kenji Wakasugi: NJG reached out over two years ago about the project. They were initially interested in the six published photos that originally appeared in Japanese Playboy in 1985. On revisiting the collection I managed to rediscover not simply six photos but ten contact sheets featuring 324 frames. I’d forgotten I had photographed so many beautiful frames, and I then understood the importance and relevance of such a collection today.

Nature is a clear motif throughout your work and the book. How does nature and nature photography influence how you approach a subject like Madonna? And why did you choose to bookend these photos of Madonna with this nature photography?

Wakasugi: The meeting of nature and culture is a constant theme throughout my work. It always has been… [Bookending with nature photography] made sense through my historical work and this particular shoot.

The book also has many references to Japanese 80s’ minimalism. Has this always been a feature of your works, and were there any other inspirations that fuelled this shoot?

Wakasugi: It has appeared at times, but the shoot inspiration remained about Madonna. 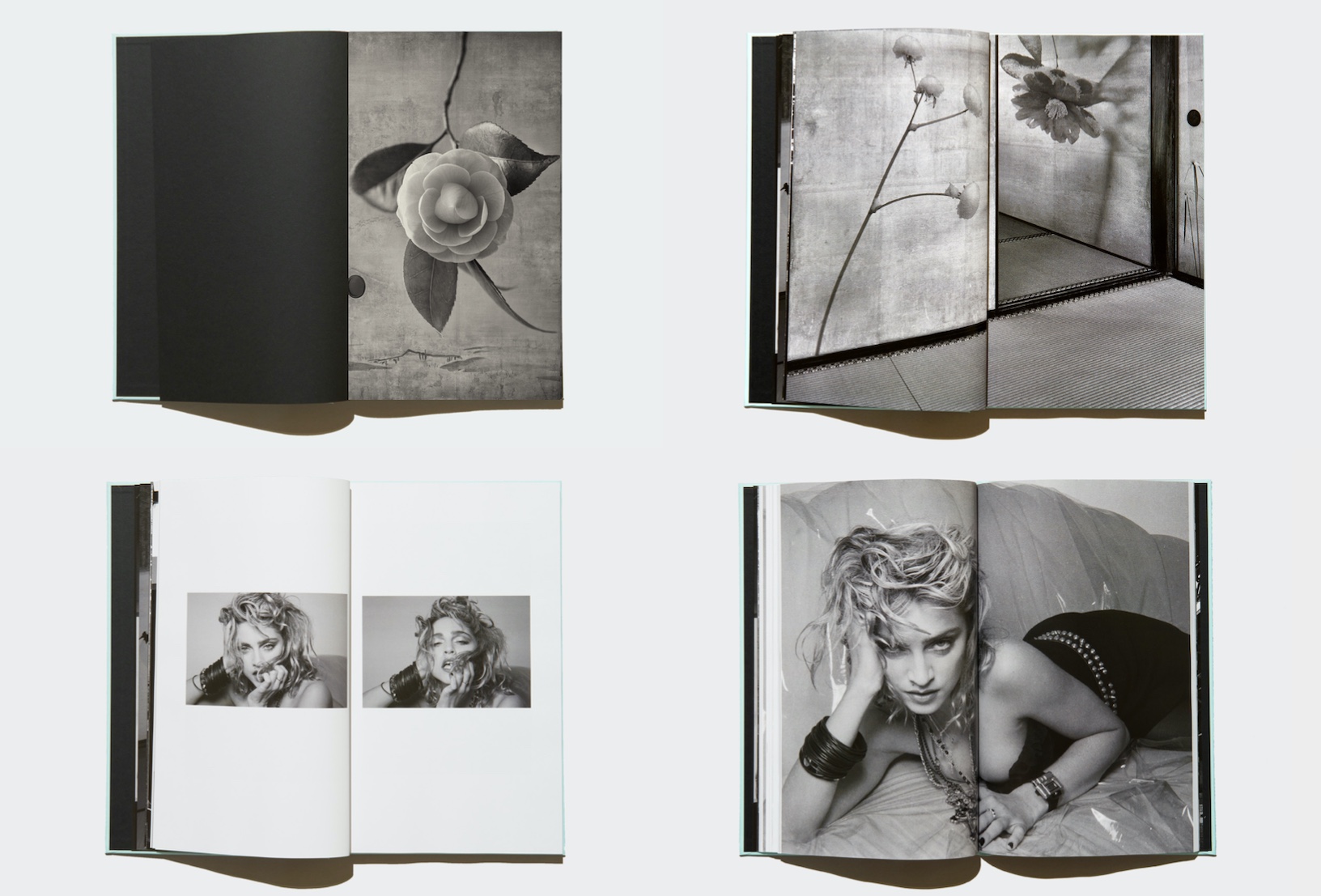 Shooting an icon can come with a lot of pressure, and having only 45 minutes to do so must have added to that. Can you recall how you were feeling when taking the pictures?

Wakasugi: I was just so focused and concentrated on her and the shoot. I only had 45 minutes. No thought or plan at all. I just took a chance, went for broke. ‘Like a Virgin’ was playing in my mind throughout the shoot.

Wakasugi: As a professional photographer, it was a moment of transition. A turning point in my career. I cherish this moment as a treasure now.

100 copies of the book are ‘Strictly Limited Edition’. What makes these copies unique?

Groarke: We wanted the book design to be as beautiful as the contents, with the design paying homage to Japanese 80s minimalism. The aqua cover features only the title ‘Adore’ de-bossed in ebony foil lettering. Madonna’s name is foiled in Japanese text on the accompanying neon pink bellyband. 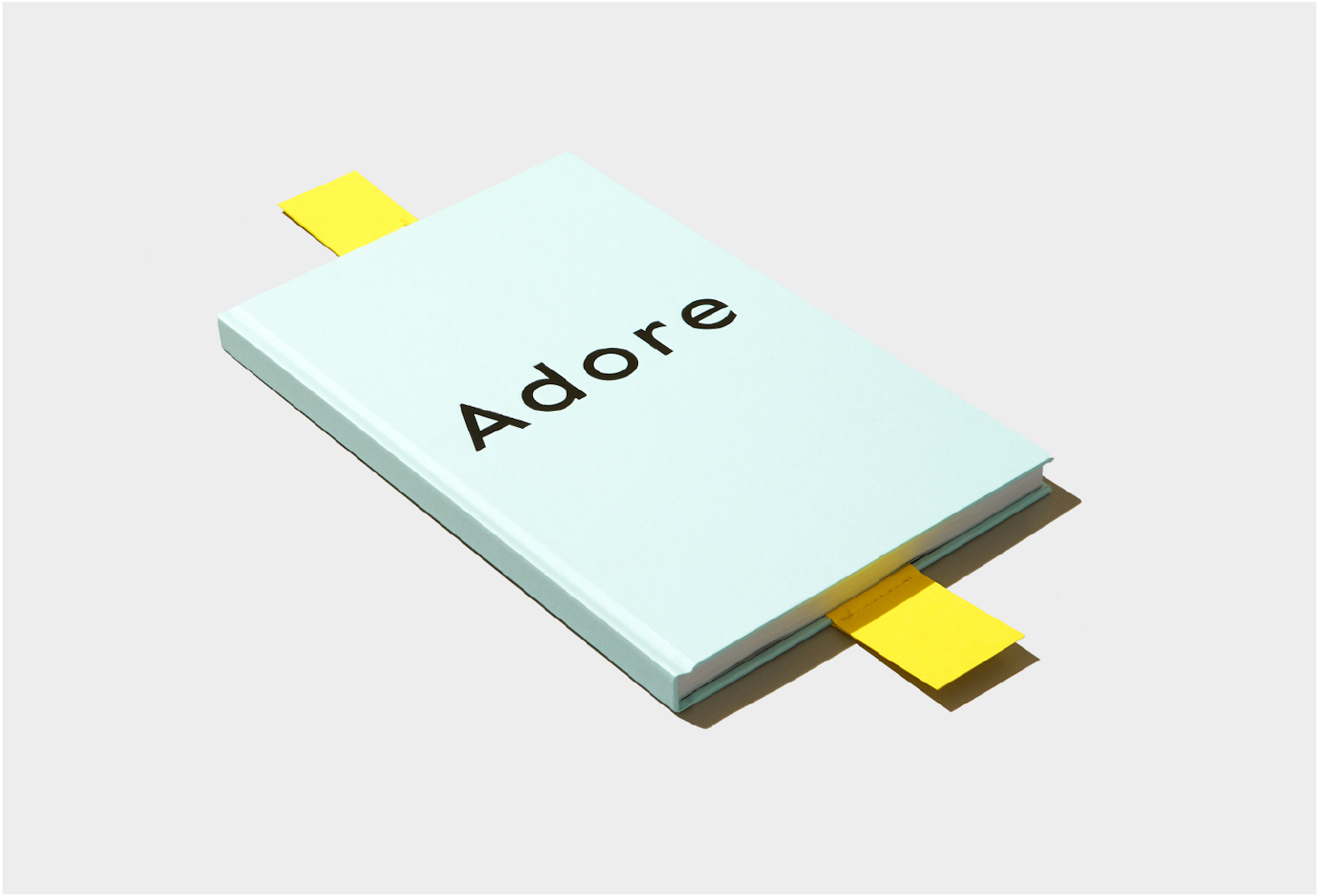 The first edition of the book is bound in recycled paper made from coffee cup waste. Has sustainability always played a part in your work?

Wakasugi: The meeting of nature and culture is a constant theme throughout my work. it always has been. This connection was very important to me and so working closely with NJG we decided to use a tactile paper that takes some steps towards reducing environmental impact. The beautiful aqua paper is made from recycled coffee cups, so this felt entirely appropriate for the first edition. It’s actually the perfect colour.

Have you got any other projects you are working on or that you would like to begin post-release of ‘ADORE’?

Wakasugi: I would like to continue making new photography which is a fusion of Japanese modernity and tradition. I am dreaming of making a book of it. 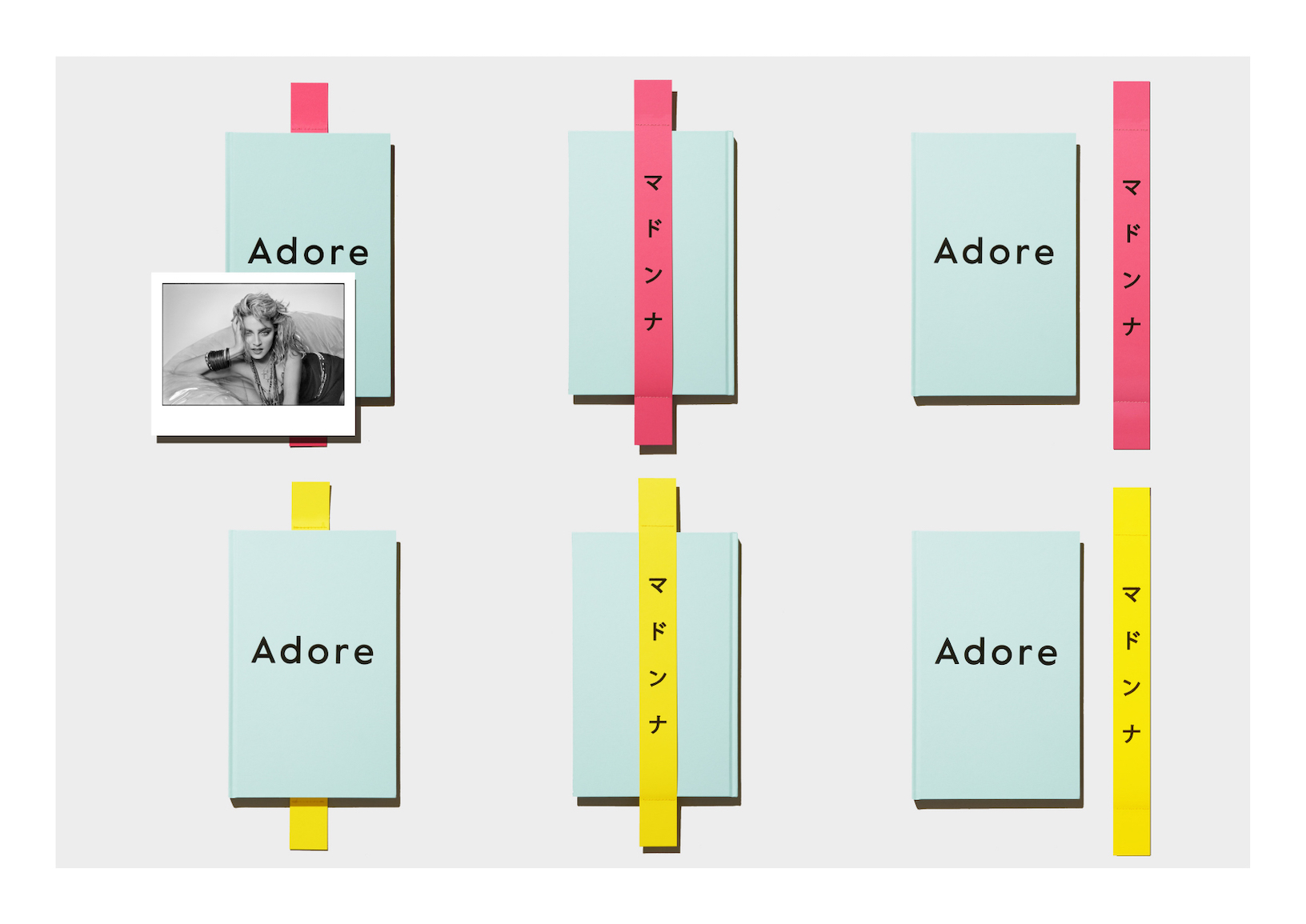