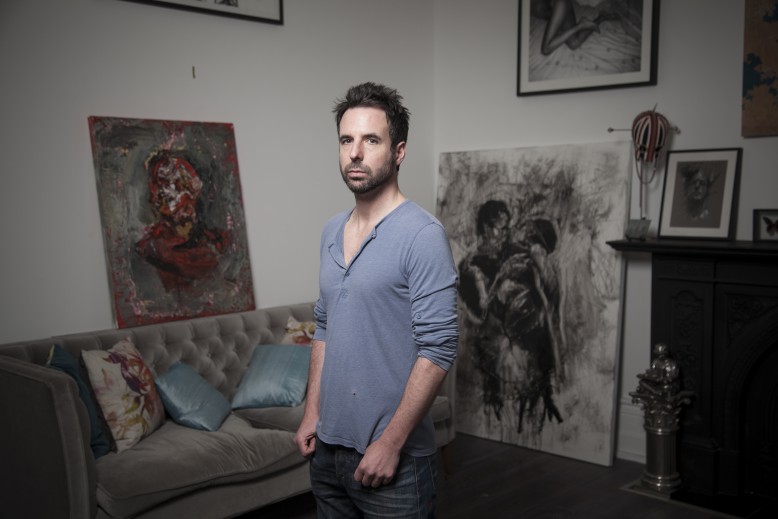 Antony Micallef didn’t just happen upon the contemporary art scene, he literally crashed into it. Born and raised in Swindon, Micallef studied Fine Arts at University of Plymouth under the tutelage of John Virtue. After wining second prize at the 2000 BP portrait award, he went onto create art that explores colour and contemporary expressionism. Labelled as one of Britain’s most electrifying painters, his work has a large celebrity clientele including the likes of Angelina Jolie and Jude Law. Here he speaks exclusively to Schön! about his childhood, studying in Plymouth and his new exhibition at Lazarides Gallery, a collection of self portraits titled Self.

You were born and raised in Swindon by parents who are not from the art world. How did you develop your interest in art and when did you decide that you wanted to become a professional artist?

Art was the only thing I ever did that gave me real confidence when I was younger. I think every child has a natural interest in art and is instinctively creative. They have innocence and a simplified way of looking at the world in a wondrous way that is unique to children.

I don’t think there is an actual moment when you decide to become a ‘professional’ artist but you just dream of doing the things you love. I always wanted to become an artist, whatever that means, but I never thought for a moment it would have ever been possible.

You trained in Plymouth under the tutelage of John Virtue. What was the most important lesson you learnt from him?

He was a special person and I owe a lot to him. I guess the main thing I learnt from him was that being an artist is about what you do and not about what you say. This is especially true for a painter. He drilled into me that knowing my language was the most important thing I had to learn. There were no frills with him and he ignored all aspects of glamour and romanticisms about being an artist. He taught me to look and study, and look again until you get things right. He made me understand the mechanics of paint and how dynamic it could be if it was wielded in the right way.

You work has been exhibited all over the world, from your participation in the Santa’s Ghetto Bethlehem in 2007 to the Saatchi Gallery in aid of the Missing People Charity. Can you name one exhibition, out of the many, that stands out for you and why?

There have been many great shows supporting different charities such as the Peace One day at the ICA in London but the main two for me were the two Santa’s ghetto exhibitions. The first one was Santa’s ghetto on Oxford Street in London. It was on the busiest streets in the country and was opened on one of the busiest days of the year at Christmas. We hired a huge empty shop and turned it in to an amazing grotto of art. In the big window at the front was a huge picture of Tony Blair taking a selfie in front of a huge explosion in an Iraqi desert (A piece of art by the artist Peter Kennard). I’m just not sure and it’s sad to say even if art like that would be allowed on display there anymore. It felt like a mass protest but disguised as a shop with real energy rather than a normal exhibition. 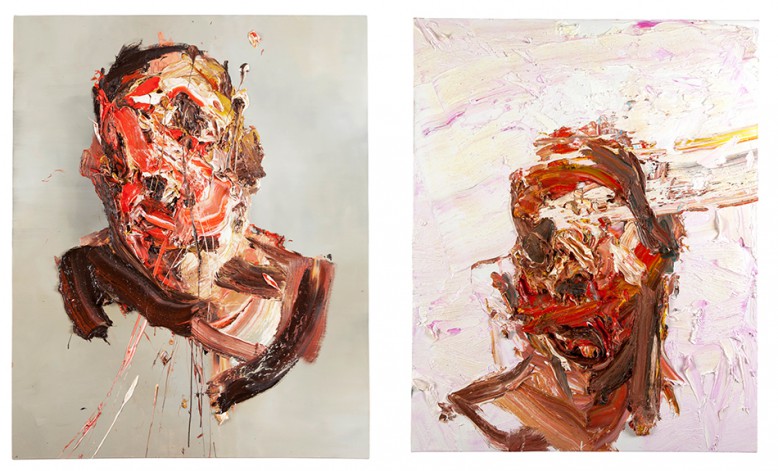 Your new exhibition Self is currently on at the Lazarides Gallery. What was the inspiration behind doing a series of meditative self portraits?

I just wanted to strip everything right back. I wanted to get rid of all the distractions and noise from my other works. I felt like I wanted to work in a simpler way but find a more concentrated way of using my language. I guess using my head as a subject was the perfect vehicle to polarize the mechanics of how I paint.

It feels like your current solo exhibition has a very different style of painting compared to your other solos such as ‘being animal’ and ‘impure idols’. The others were more closely related to pop art whereas ‘Self’ seems deeply reflective, more personal. Tell us a little bit about the how the techniques used in the series varies to what you’ve done previously.

The technique used in this show is what makes the pieces work. There is no other way in which to convey what these paintings say without using so much paint. These are not illustrated heads but heads made from the mechanics using big physical brush strokes using heavy oil paint inches thick. It was like twisting organic muscle around until something spoke to me.

You’ve been a vocal critic of consumerism and excess. How has your take on contemporary society evolved since you started out?

I think I just became what I was painting about. It just didn’t seem right at this time to make work about this anymore as I was fully involved and taking part in the very issue I was painting about. I think I just wanted to purify myself internally and as well as physically and this was my way of doing it. I want to return to that subject at a later date, possibly, but it has to be communicated in a way that hasn’t been done before. I feel I have new tools at my disposal now, but it’s a question of how I amalgamate them with my new ideas.

You art is admired by a host of Hollywood celebrities including Angelina Jolie and Brad Pitt. You declined Angelina Jolie’s request to paint her children, but is there anyone in the world that you would like to paint a portrait of?

I didn’t decline it because I wasn’t interested in what she was asking. I would have loved to do it but it’s not something I felt I could do. I don’t see my portraits as conventional ones as it’s like painting your muscle and flesh under your skin. It’s about what’s underneath. It’s an internal portrait and not about how one looks. I find this really hard to do with other people I’m not familiar with it as it’s such a brutal act.

Lastly, how would you like people to remember your work in the coming years?

I just want my work to be respected… That’s just what I’ve always wanted.

Self is on show at Lazarides Gallery until 19th March.