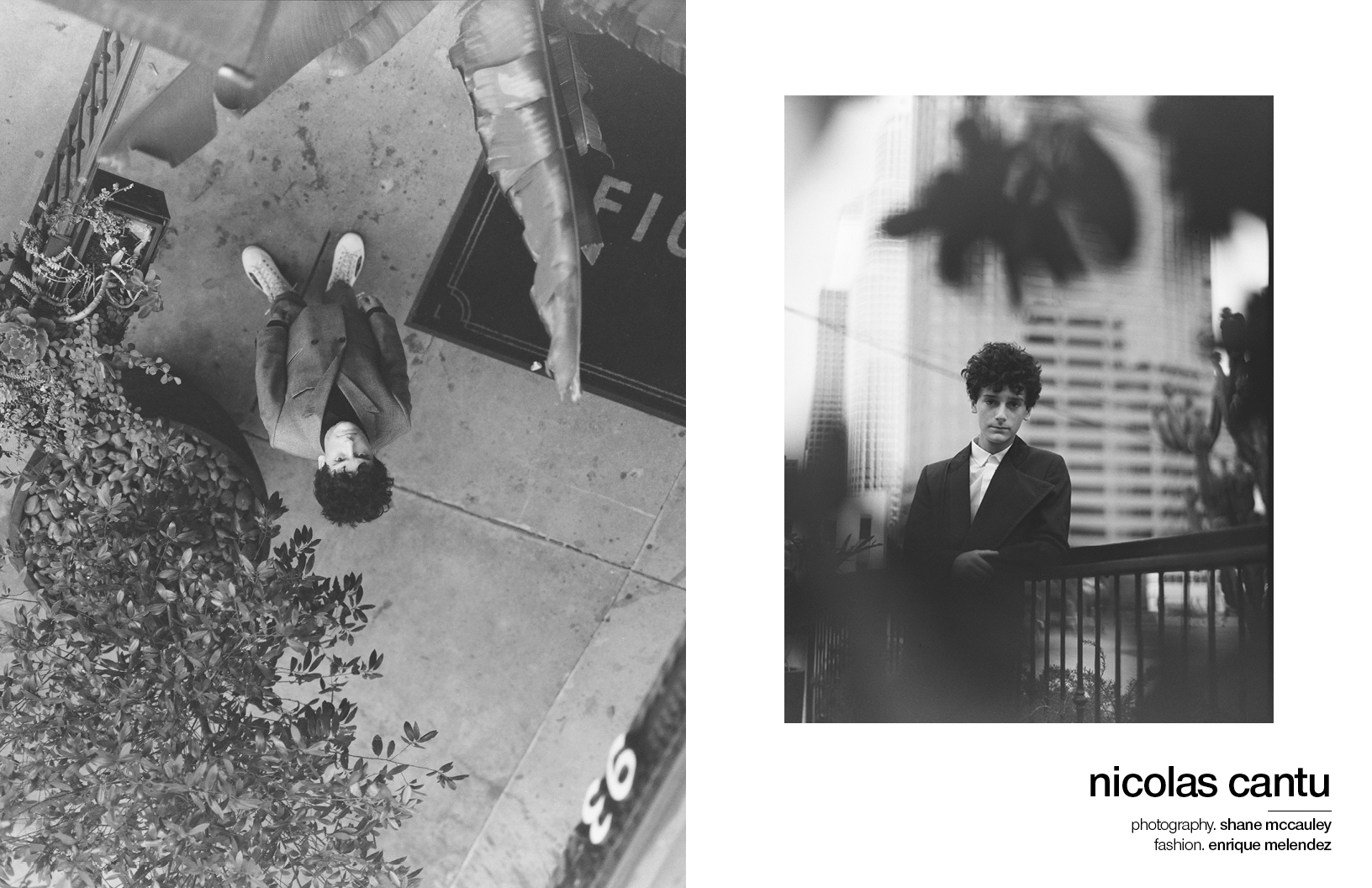 Spooky season is officially upon us and with it come some chilling new shows to add to your seasonal watchlists. If you’re a fan of The Walking Dead or its spinoff series Fear the Walking Dead, the newest addition to the TWD universe, The Walking Dead: World Beyond, puts a new, even gruesomer spin on the already familiar franchise.

Set a decade after the onslaught of the zombie apocalypse, the story centres around four teenagers as they come of age in this harrowing new world. Bringing the grisly story to life are some bright, young stars. 17-year old Nicolas Cantu is one of them.

It was clear from an early age that the Texas native had a knack for acting but Cantu has his hands in many pots. Before he was killing zombies on camera for a living, he was lending his voice to some beloved animated characters like Gumball in The Amazing World of Gumball. He happens to be somewhat of an animator himself, creating his own visuals for his YouTube channel that boasts almost half a million subscribers. Cantu is also an avid gamer and kind of a big deal in the Minecraft-verse.

You can catch him kicking some undead ass as Elton in The Walking Dead: World Beyond, airing now on AMC and streaming on Prime Video, but Schön! caught up with the multi-talented star at home to find out how he earned his animating chops, the behind the scenes of training to play a teenage zombie killer, and what’s kept him busy while staying at home.

You knew you wanted to be an actor at the age of seven, but was there a specific moment when you realised it was your calling?

Acting at seven consisted of school plays and local theatre programs in my hometown of San Antonio, Texas. But the moment I realised this was what I wanted to do for the rest of my life was when I stepped on my first set. Growing up watching movies and TV, I would always wonder, “What is it like to make this stuff?” So seeing all the cameras and equipment set up, and the crew all working together to create what inspired me the most was, well, inspiring. But my mom was a big part of it too. When I, a 7-year-old, told my mom I wanted to be in movies her first instinct was to make it happen. Having my mom be my biggest supporter in this new world I was jumping into showed me I wasn’t crazy to chase this dream.

How did you land your role in The Walking Dead: World Beyond?

I auditioned in April of last year and when I saw that call for a new Walking Dead series, I was pretty nervous for the audition. I would watch The Walking Dead with my dad and I loved the show so being presented with an opportunity to join the universe I wanted to give it my all. Thankfully they liked what I did and now I get to kill zombies for a living.

Were you a fan of the original series and its spin-off, Fear the Walking Dead? Can we expect to see some parallels?

Back in 2010-2012 zombies were everywhere, not literally, I mean they were everywhere in all kinds of media. So everything I consumed was zombies, zombies, zombies… I would play zombie video games, watch zombie movies and of course watch zombie tv shows. The Walking Dead quickly became one of my favourite shows because my brothers and my dad would all watch it together and we would bond over watching zombies get mutilated by machetes and crossbows. And while I haven’t watched Fear the Walking Dead I can tell you our show is the same world as the first two shows through a new, younger pair of eyes. 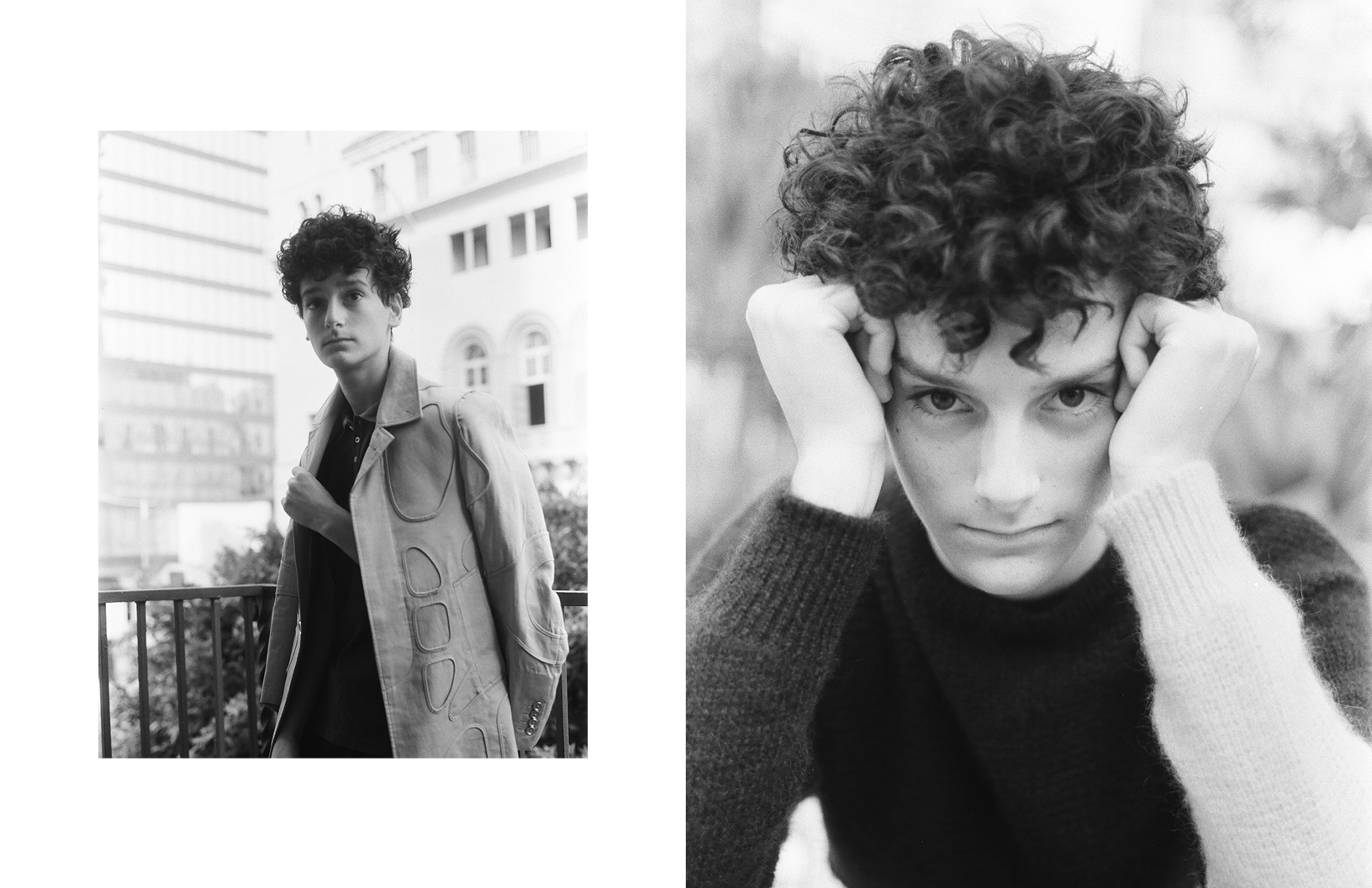 What can you tell us about your character, Elton?

Elton is an orphan of the apocalypse who has had to learn to grow up without parents. But he keeps them alive in his pursuit to finish their work as scientists, so he documents the world around him like they had, before the world was overrun with the undead. He’s the most curious, analytical, and zen-like 14-year-old you will ever meet. He’s come to terms with the fact that statistically, the human race will not survive this apocalypse, but in a positively nihilistic manner, he doesn’t let that truth stop him from accomplishing his goal of documenting the broken world he’s now living in.

What attracted you to the part? Was there anything in particular?

When I first met Elton on that audition spec sheet I felt like I was looking at a lot of myself. It was kinda how I thought I would react to a zombie apocalypse. So the similarities in our way of thinking drew me to the character. And while that made me similar to Elton mentally the description of him being a black belt in karate really intrigued me because I am most definitely not that. So when I got the role I was able to train at a dojo near where I lived to get more accustomed to the more physical aspects of the character. And I can say now that playing a black belt in a zombie tv show has been a blast.

You’re pretty big on social media, but your YouTube channel has the most subscribers. How did you get started with that? Do you do the animations yourself?

I’ve been watching youtube for a very long time and it’s a big part of the entertainment scene for my generation. Ask any Gen Z kid and they will tell you that they have thought about making Youtube videos at least once. So I’ve always had an interest in starting content creation but I didn’t start until 2018 when I met a friend online with the online name of Infamous Swoosh. He had been making animations on Youtube for two years at that point so when I told him I wanted to do the same he kinda showed me the ropes and introduced me to many good friends I still keep in touch with to this day. Learning animation was very difficult in the beginning but eventually, I grew to love it. Although I don’t animate much anymore I’m still glad it’s a skill I learned, a lot of the principles carry into other kinds of art. 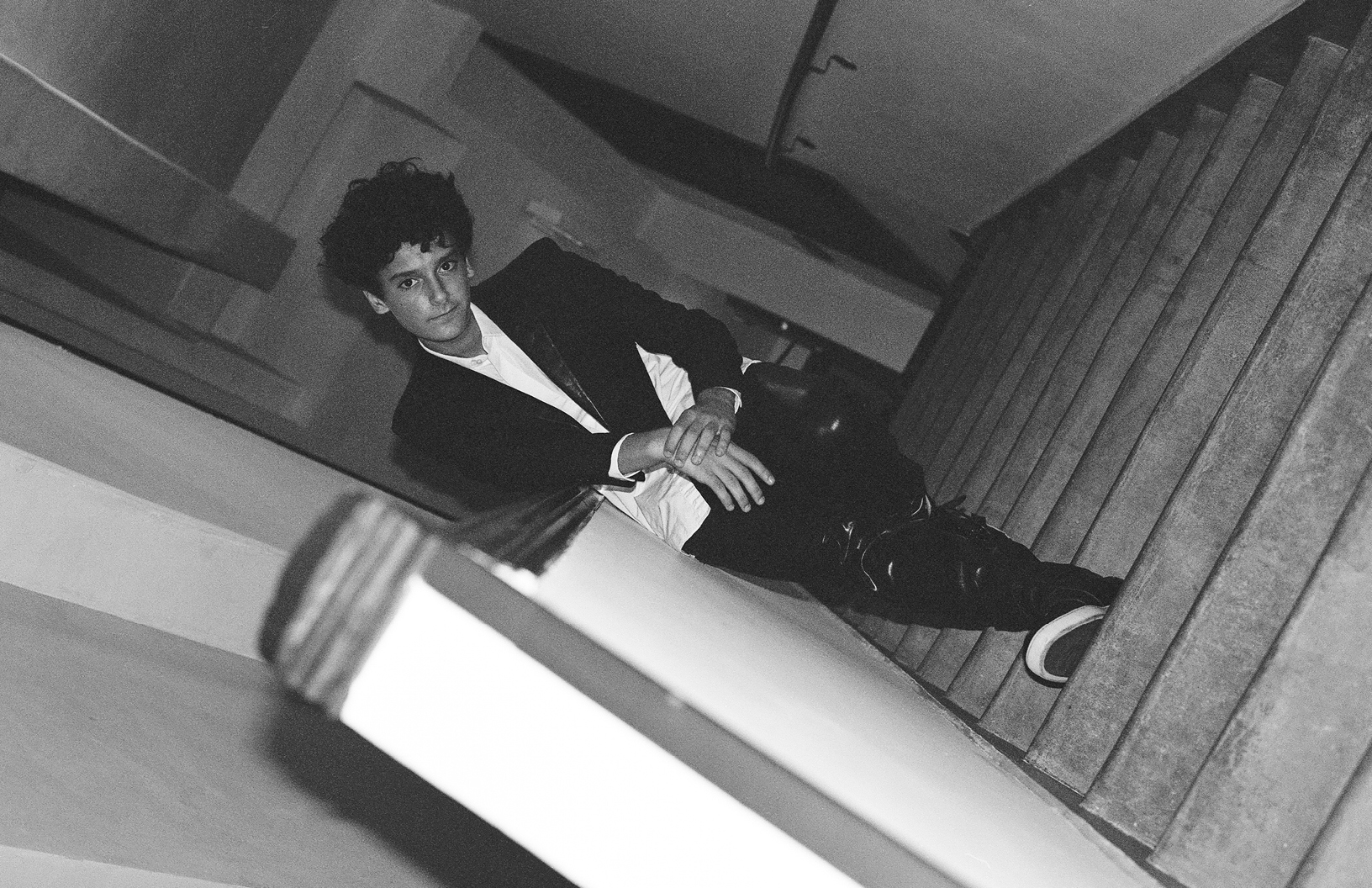 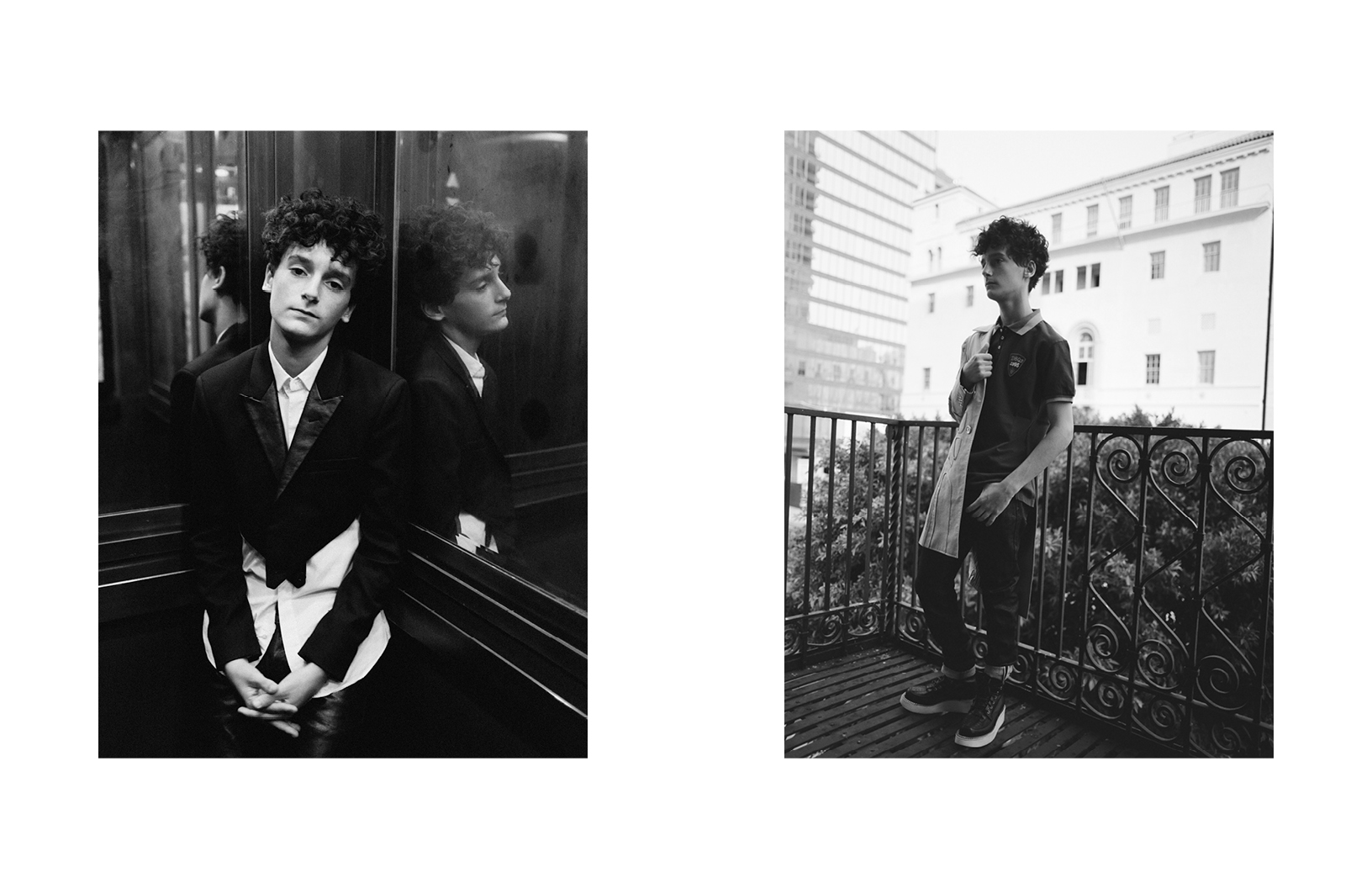 You’re also big on gaming; what is your favourite thing about the gaming community?

My favourite thing about the gaming community would probably be the unity between everybody in it. Video games are a very new medium of entertainment and although they have become these massive multi-million dollar projects it still feels like a niche community. Because video games are an interactive medium your experience with a game could be completely different from somebody else’s. So comparing stories of how you did a certain mission or overcame a certain obstacle or completely destroyed somebody in multiplayer really connects gamers everywhere.

Did you play the Walking Dead video games prior to being cast in the series?

Assuming that most acting projects have been on pause throughout the pandemic, what have been your main outlets during the lockdown?

I’ve kinda been going crazy without work and while I haven’t been doing much conventionally creative I have been skating a lot. I picked up skateboarding a year ago and it’s been my saving grace during this quarantine. Every free day I have I’ve spent skating and it’s been awesome. It’s keeping me sane, I’ve really needed it during the lockdown.

We’re sure there are plenty more to come, but has there been a career highlight that really stands out so far?

It sounds corny but I think everything is a highlight. Another day where I get to do what I do is crazy, how is this a real job? But a really cool thing was being able to play Gumball on Cartoon Network. I grew up on that show and many others on that network so joining that family of legendary cartoons was incredible. And even though that’s long over many people still know me as the “funny gumball guy” so it’s been a fun ride. I’m looking forward to what’s next now that I’m a part of such an expansive TV universe like The Walking Dead, I’m very thankful to be where I am currently and I’m crazy excited for the future. 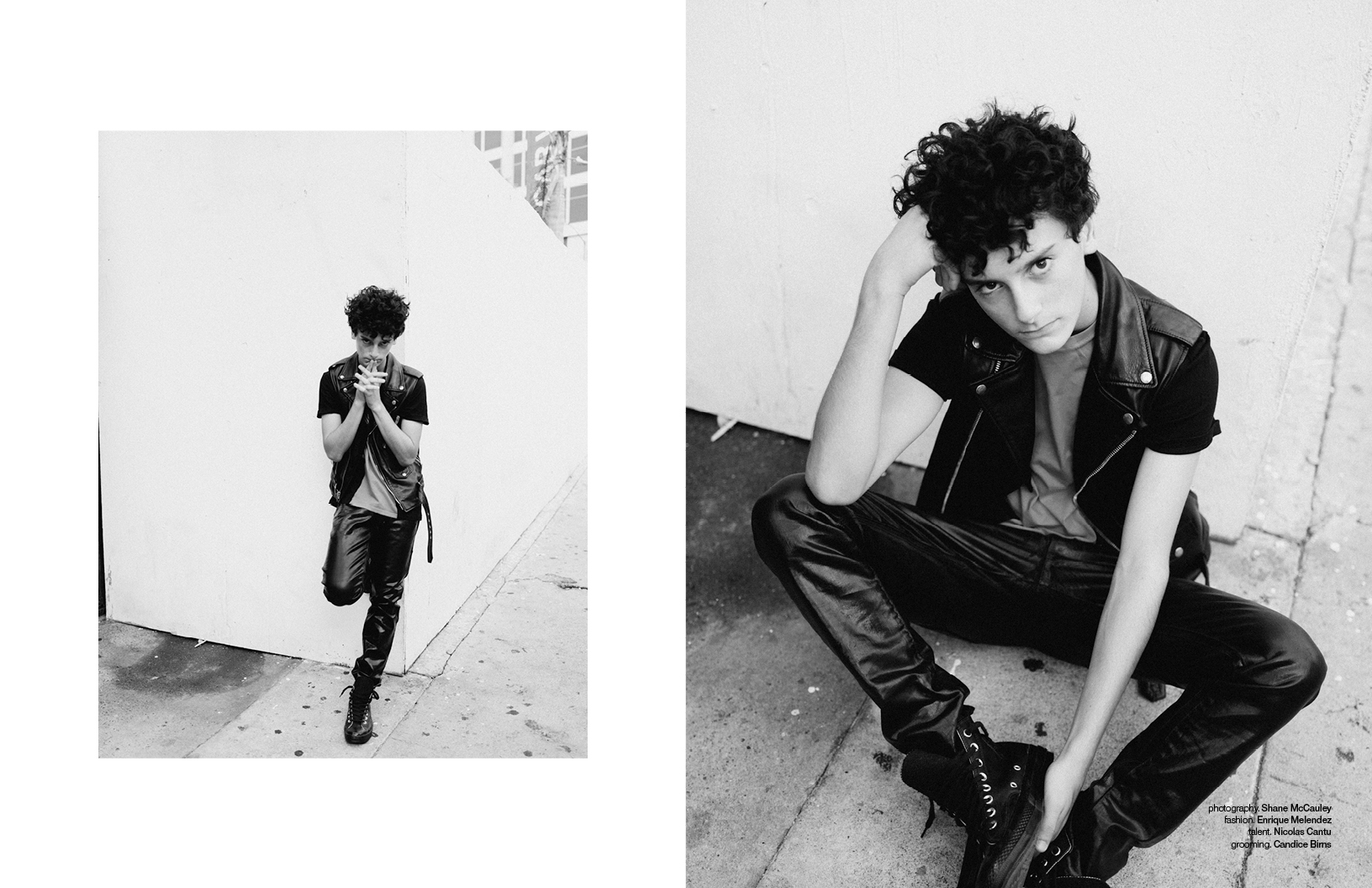 ‘The Walking Dead: World Beyond’ is now airing on AMC. Watch the trailer here.