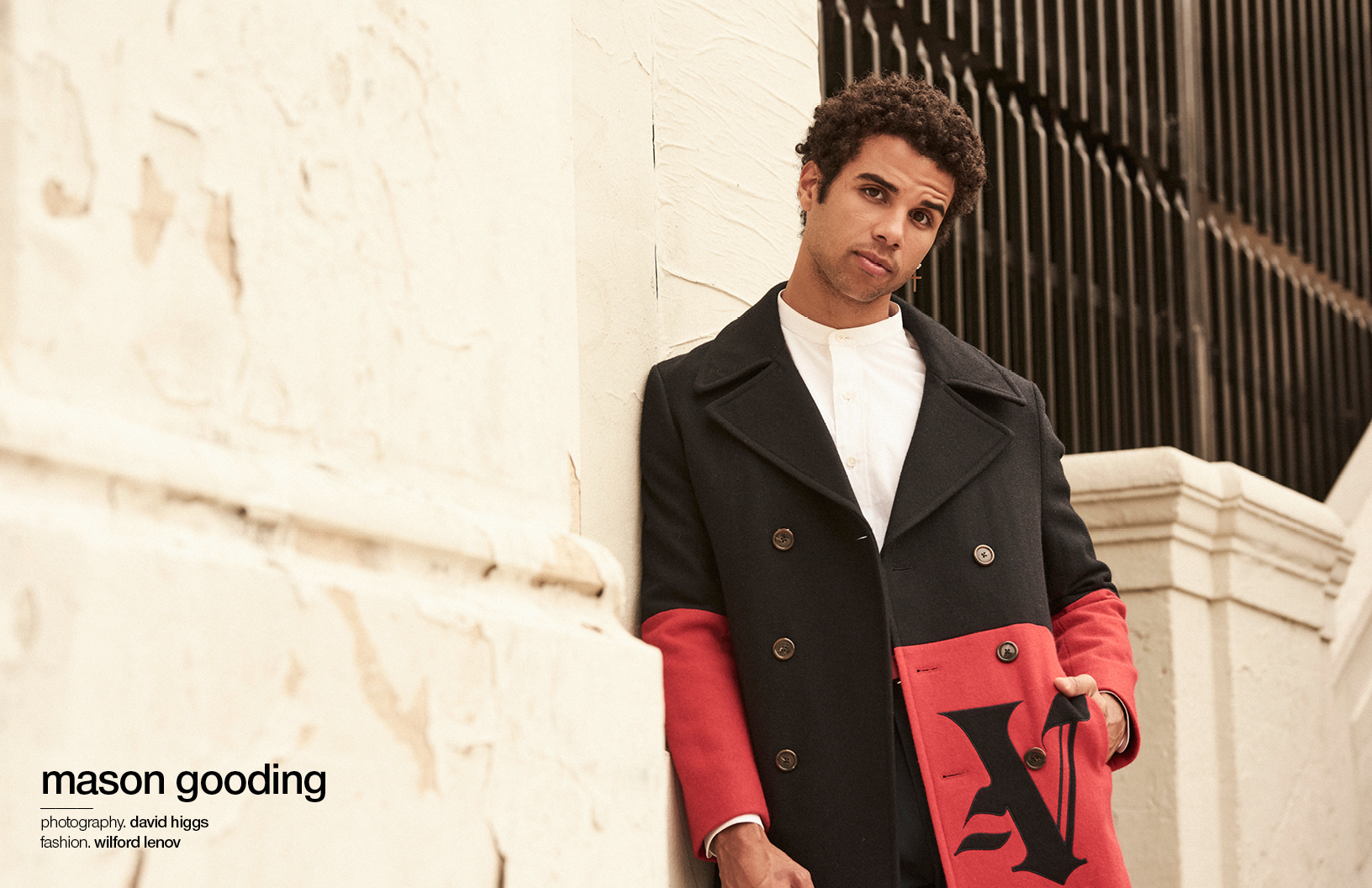 If you’ve watched Love, Victor, Hulu’s follow-up series to the 2018 hit film Love, Simon, you’re already pretty familiar with  Mason Gooding. You might even have a healthy disdain for him, which is only natural since Gooding plays antagonist Andrew Spencer in the series. However, seeing him only for his role in Love, Victor would be doing the 23-year-old Gooding a profound disservice.

When he’s not portraying the cocky, basketball-playing jock, Gooding a self-professed nerd, eagerly geeking out about everything from superheroes to manga and video games. He’s also, as Schön! recently discovered, incredibly open and honest. To hear his whole story, Schön! talked to the L.A. native about his interests, the future of the series, and more.

First of all, how did you land the role of Andrew on Love, Victor? Was there something in particular about the character that attracted you to the role?

Andrew, to me, exemplifies the positive side of introspective development, seeing the aspects about yourself that need to change, coming to terms with them, and then working to overcome them for the betterment of your own well-being, as well as the well-being of those around you; a lot of times in media, “popular” characters are portrayed as entirely arrogant, void of any sort of empathy or understanding of their actions as they relate to other people, bordering on sociopathy. However, I was very keen on furthering the conversation of what it truly means to take accountability for one’s own actions and Andrew, over the course of the season, seemed to embody this idea that people can grow and change for the better if given enough time and understanding on how to do so.

How did you prepare for the project? Had you watched Love, Simon before, or read Simon vs. the Homo Sapiens Agenda?

First of all, unlike myself, Andrew is a very skilled basketball player and is referenced many times throughout the series as being “dominant” on the court or being the “best” on the team, so for me; who was and never will be any of those things, I became completely enthralled in the world of basketball both as it pertains to the sport and skills of playing, as well as culture that pervades “basketball” as an entity. Everything from Andrew’s attire, to his upright and squared posture is meant to reflect his position on the court, which is also meant to echo his state of mind following Victor’s arrival into Andrew’s domain: he’s confident and he’s full of himself, but in the presence of other immensely talented players and socially successful people, he’s forced to reconsider his entire demeanour.

So, what are some of the similarities and differences you share with Andrew?

Well, as I alluded to before, Andrew is a much more talented basketball player than I am, due mostly in part to my childhood being spent reading comic books and playing video games. That being said, I tend to lean much harder on the side of self-deprecation (which is certainly another difference between Andrew and me) but truth be told I was on a sports team for all four years of my high school career, I played football like most young men do, however that was mostly to offset (or justify) the amount of food I would consume on a daily basis… I really liked to eat and football gave me a reason to excuse my horrendous dietary behavior… I think I was nearing 300 lbs in my junior year of high school? Yeah, I’d lastly say I’m pretty sure Andrew was able to avoid a childhood wrought with fat jokes and “scooping.” (If you don’t know what “scooping” is, consider yourself lucky.)

Your first Instagram photo is you dressed as Spiderman. What’s your most recent nerd obsession?

FiRsT oF aLl... let me say I love this question; I’m really into a wide array of “nerdy” media but as of late I’ve been steadily building my collection of manga mainly in the form of this one series called Fire Force, which is released on like a bi-monthly basis. Aside from that, me and a few of my Love, Victor castmates play Fortnite pretty consistently… speaking of consistent, Isabella Ferreira who plays Pilar is certainly one of the loveliest people and talented actresses I’ve ever met but she’s absolutely ruthless on the sticks and carries the whole team in Fortnite Battle Royale. 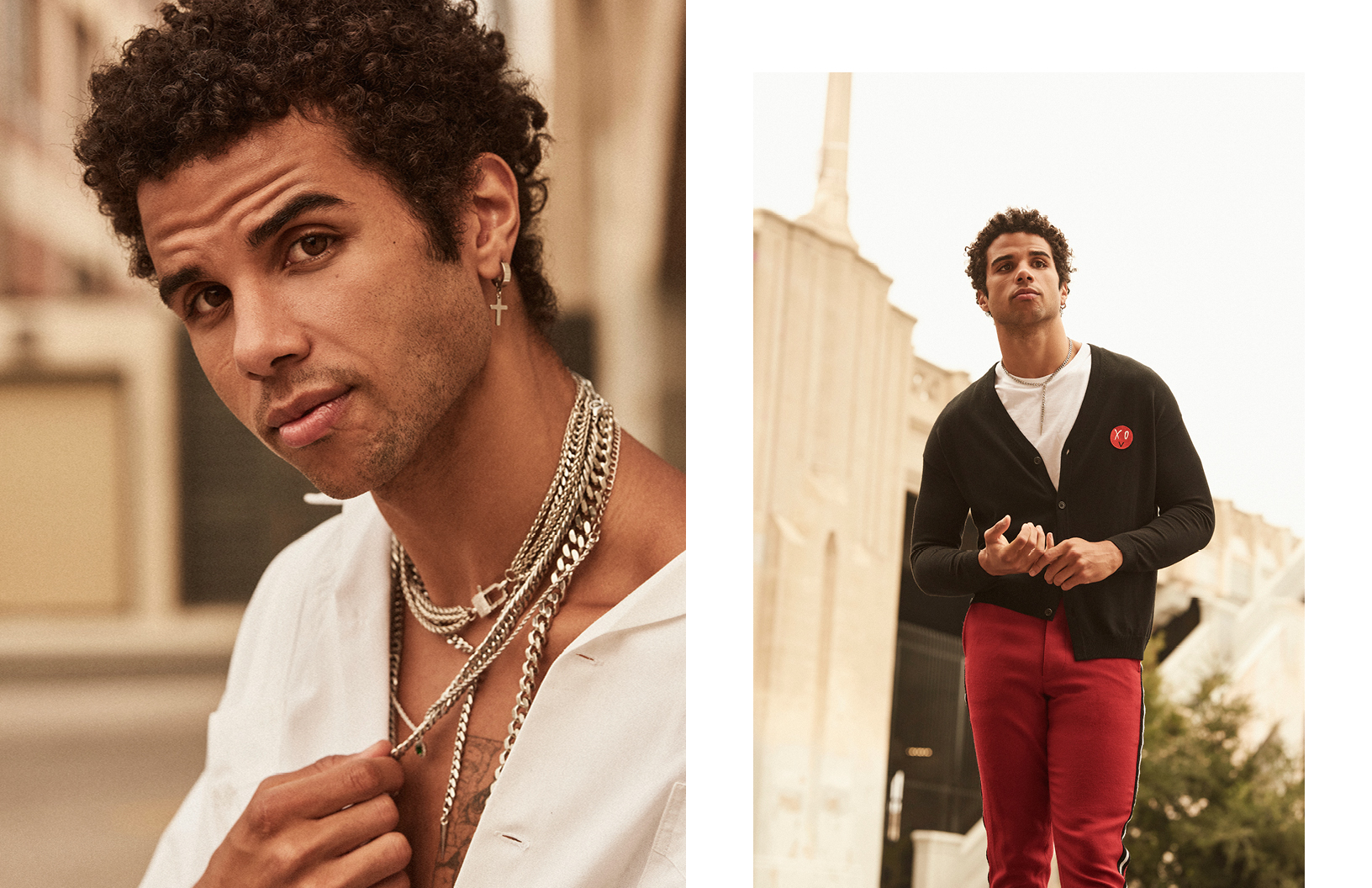 As a self-described “nerd” in your younger years, what’s it like playing a lot of not-very-nerdy characters? Difficult? Fantasy-fulfilling?

There’s something cathartic about portraying characters that might not have been friendly to me as a kid… It almost allows me a sort of peace of mind when I realize a lot of the time these people, the bullies, the “cool-kids,” etc, are struggling with image issues the same way I am. Andrew, though admittedly not nearly as insecure about his physical appearance as I was at his age, certainly has deep-rooted insecurities about being liked and “appreciated” by his peers. So fantasy-fulfilling? No, probably not. However, I don’t think I act in order to fulfill my own fantasies, but rather to allow others to understand more about themselves through the characters I portray… If that makes sense…

You share most of your storylines with Rachel Hilson‘s Mia. How was it working with her?

Rachel Hilson is a true auteur and champion of the acting medium. High praise, certainly, but also well-founded. Her understanding of characters, their motivations extend well beyond a mere scene or portrayal of a single character but clearly carries over to her own means of storytelling as well, leading to some amazing work being written and created by her. I digress, she’s a joy to work with and it makes the job all the easier when having a true friend and confidant on set experiencing the same trials and tribulations as yourself.

Would you be down for season two? How do you hope Andrew’s relationship with Mia would evolve in a potential season two? Since it ended rather harshly in the first…

Crossing my fingers, toes, and even nose for a season two. The characters have a ton of room to grow as people and I feel as if ending the show now would be premature, to say the least. The shift in platforms as well excites me a great deal; the opportunity to explore more adult themes on the Hulu platform should allow the show to find a broader audience and thus, hopefully, speak to and entertain a larger group of people, which is always the goal with something like this.

Before the release, the series moved from Disney+ to Hulu earlier this year. Did that bring uncertainty? How were you feeling during those times?

It’s so funny when people refer to the switch as a “struggle,” in no way do I fault anyone for viewing it as such. However, I assure you this move, creatively, only works to strengthen the show, its characters, and the immensely talented people behind the scenes crafting the storylines and narrative beats throughout the show. Disney+ is, in and of itself, a phenomenal platform and streaming service, I’ve watched The Mandalorian maybe three separate times now, but if the executives behind the platform itself feel as if the storylines and narratives present in Love, Victor were too mature in season one, then allowing the show to find its voice amidst another streaming service is the most generous and understanding things a company can do for the show itself.

As an actor, are there any people you look up to or are inspired by?

I’m forever inspired by the actors and artists that have paved the way for my being able to do what I do today by struggling against a systematic oppression that has kept them and people like them from achieving their dreams for decades prior to this one; as it stands I don’t think any of this (my career) would have been possible without my father putting in the groundwork and succeeding the way he did so that I could have the privilege and resources I did to start my career a few years ago. On a separate, I grew up on classic movies and those old black and white films and Marlon Brando was for me a huge inspiration as to understanding what art could look like on-screen in motion. If that makes any sense…

What role of yours have been most influential in your life and why?

I’ll never forget the day, sitting at home with my then-girlfriend playing video games — Dragon Ball FighterZ on the Playstation 4 — when I got the call that I had gotten the role of “Nick” in Booksmart. I cried, I screamed, I called my mom, the whole deal… Since then, having the pleasure of working with such truly amazing and talented people, Olivia Wilde, Kaitlyn Deaver, Beanie Feldstein, I would certainly say Booksmart was and always will feel like that moment I dreamt about; made all the better by being allowed to work with the aforementioned amazing and talented people. 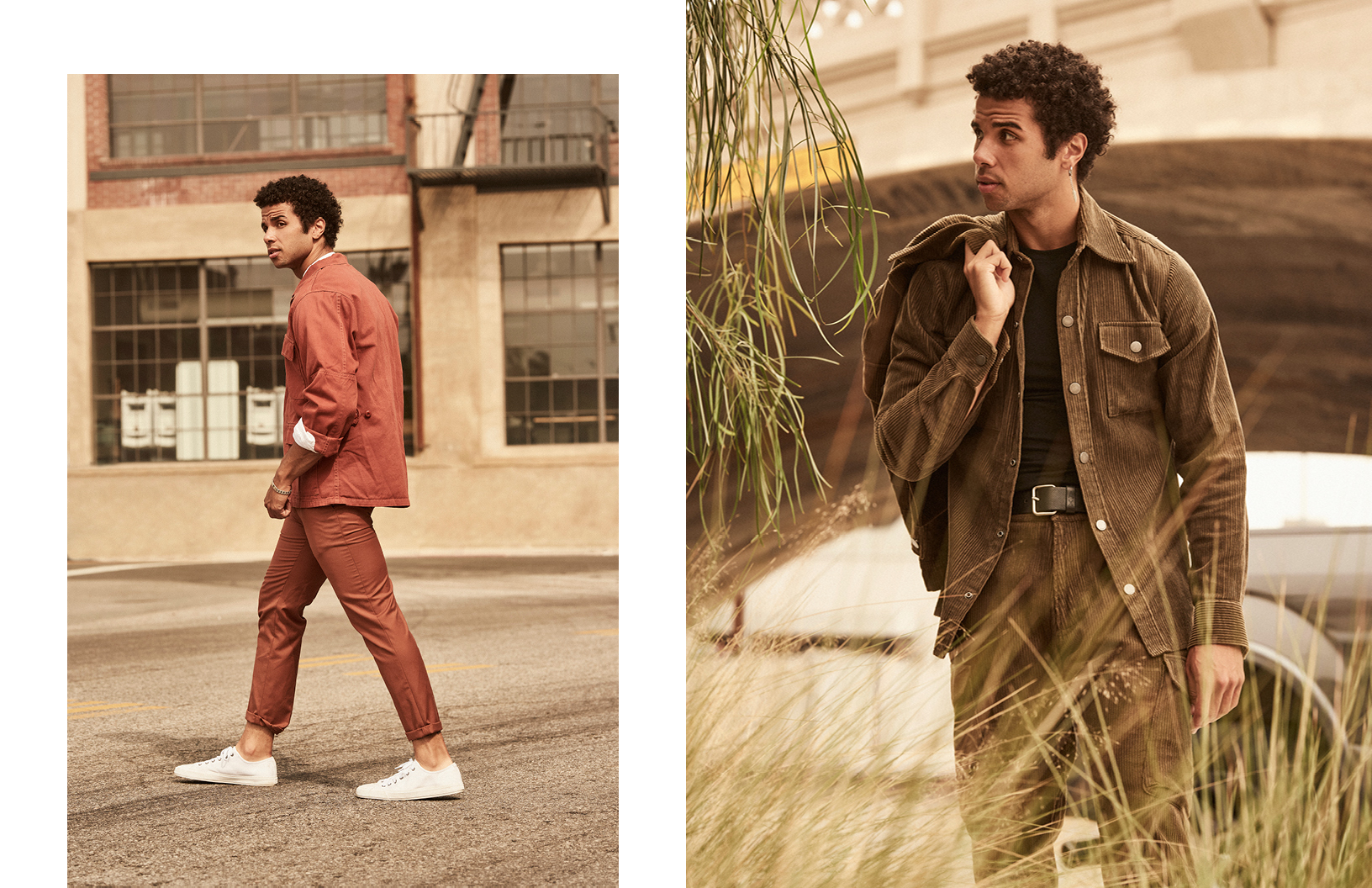 Aside from acting, you’ve been really vocal about social injustices and the Black Lives Matter movement on your social media lately. You took to IG to share your conflicting feeling about promoting the show during these times. Why did you come to the decision to donate to organizations supporting BLM and/or the LGBTQ+ communities when making a post about the show?

I feel as if there’s a certain obligation we have as a generation to foster a sense of inclusivity, social equity, and understanding upon the foundation laid by past generations that I try to tap into using my social media platform. It feels negligent and dishonest to posture as if my mind is solely focused on promoting a TV show when there are so many topics worth exploring that not only further a general conversation about socio-political justice, but also go hand-in-hand ideologically with Love, Victor. So, I figure, why not do both; promote my show and do my job while also highlighting organizations and movements that are in line with ideologies that I myself believe in.

Are there some of the organizations you’ve been donating to that you’d like us to highlight to our readers, too?

The Okra Project is an organization I actually really enjoyed delving into and understanding the backgrounds and inspiration behind as it works to provide black trans persons with home-cooked meals that base their recipes on culturally relevant materials such as Okra — an African plant rich with nutrients that provided enslaved Africans with necessary vitamins and sustenance.

Lastly, what are you looking forward to right now?

Something I’m looking forward to is actually sort of an ongoing affair, was since the release of Love, Victor, I’ve been receiving a lot of messages and DMs regarding the shows themes and the showcase of the LGBTQ+ experience that maybe hasn’t been present in their lives, that is now working to retroactively provide for them some sort of validation and thus, hopefully, offering to them the notion that they are seen, and that their stories matter on a global scale; because at the end of the day, to make people feel seen, heard, and represented, that’s the whole reason I feel I create art. 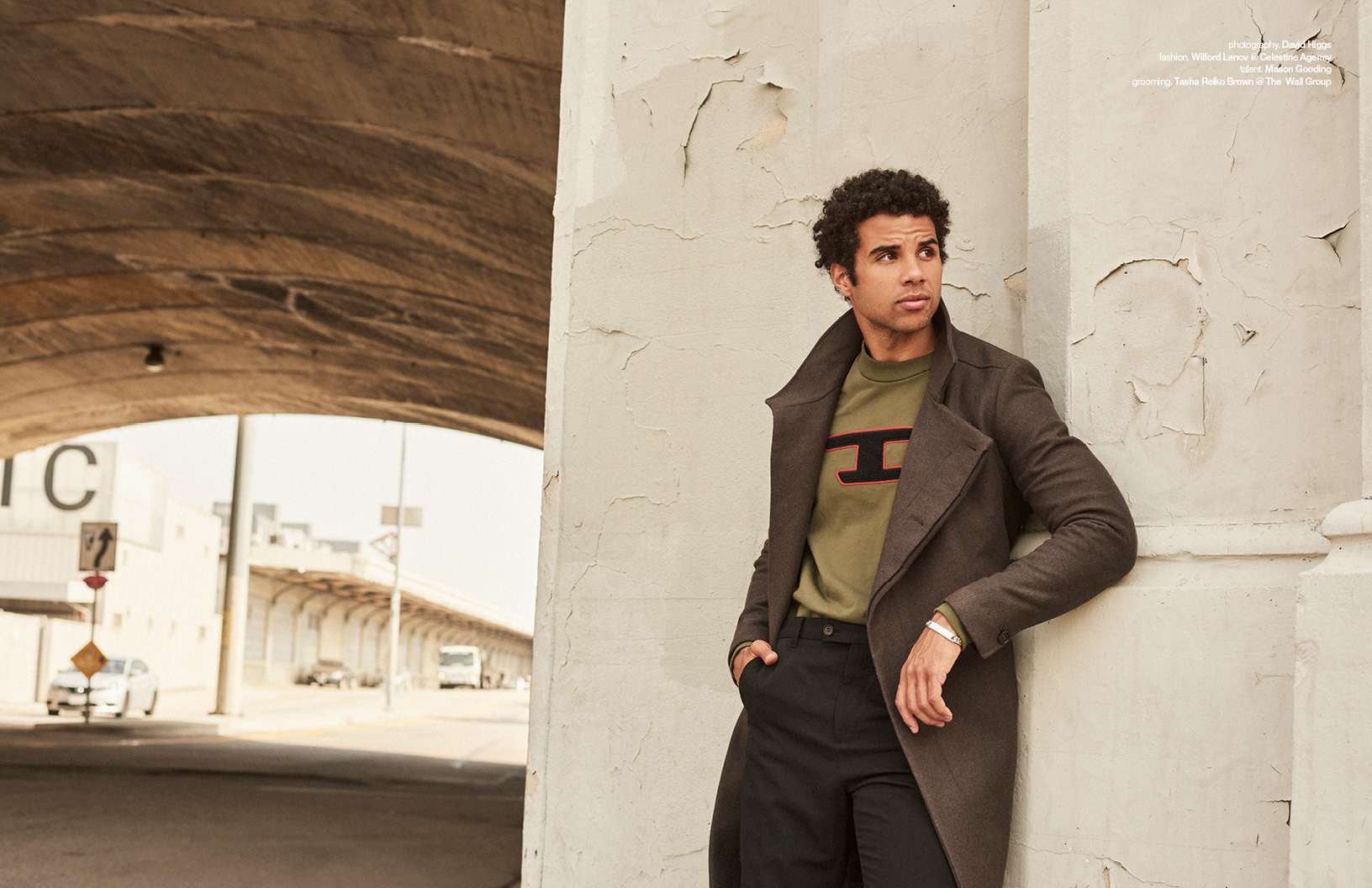