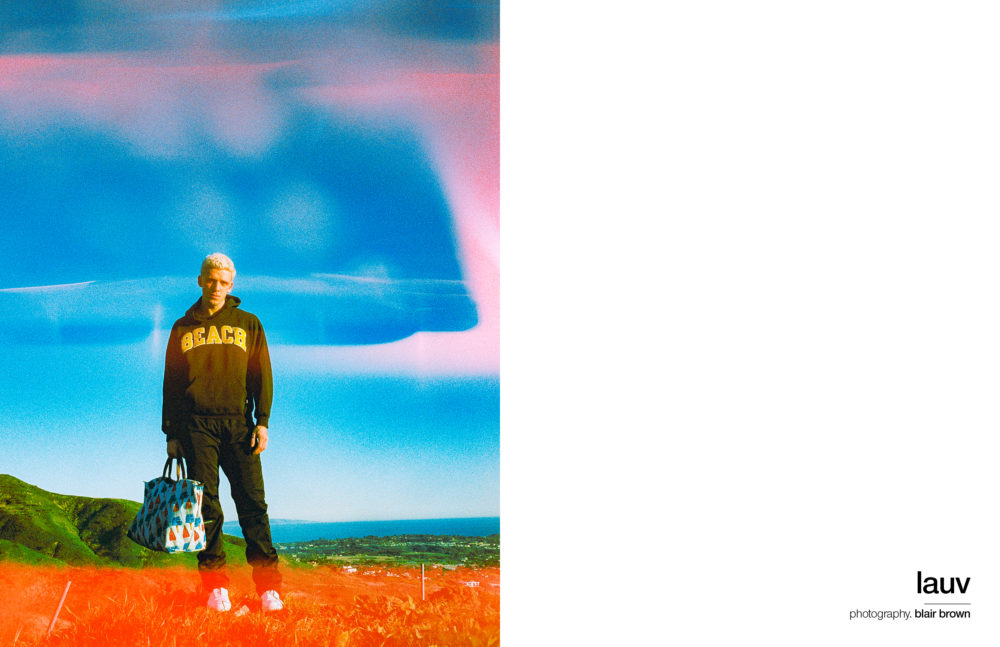 By now, if the name LAUV doesn’t ring a bell, you’ve probably been living under a rock. Hailing from California, Ari Staprans Leff, best known by his stage moniker LAUV, has been making a name for himself in the music world both on and off the stage since 2014 but it was in 2018 that he was jet-propelled globally when his song, “I Like Me Better,” was featured on Netflix’s hugely popular rom-com To All The Boys I’ve Loved Before.

Not even two years later, LAUV (also known as the one-man-boy-band) is staying on top of his game. Last year, he put out the anthemic, quasi anti-love song “I’m So Tired” featuring Troye Sivan to critical acclaim. He was also featured in the remix of BTS’ pop ballad “Make It Right,” an Ed Sheeran-penned track which originally appeared on the group’s Map of the Soul: Persona. In his debut studio album, ~how i’m feeling~, LAUV links up with the global superstars once again (though only two of the seven members are featured on the track).

After receiving constant acclaim and garnering much anticipation from fans, ~how i’m feeling~ officially debuts today, March 6. LAUV’s debut is a modern retrospection of all things loneliness, sadness, and happiness — as manic as that may sound — which showcases the artist’s many facets. LAUV’s songwriting, sensibility, and clean composition become the cornerstones of his debut, which is bound to make its way to all your summer playlists.

To coincide with the release of the album, Schön! caught up with the artist to discuss his creative process, the importance of his collaborations, his upcoming world tour, happiness, and the road that lies ahead.

~how i’m feeling~ is your first studio album and it features 21 songs, which, objectively, is a lot. Even more so for a debut! Why did you feel you had to include these 21 songs?

Originally, I wanted the album to be 15 songs because that was the magic number in my head. But after I had written all of it, I couldn’t narrow it down, so then I was like, “maybe it’s 16 songs. Maybe it’s 18 songs.” Then it was 20. Then it was 21. And I was like, “well, it just is what it is.” I feel like you can kind of release however much music you want these days, which is really cool.

True. Since when have you been working on this album? How’s the whole process and journey been?

It began as a pretty hard process. I really had no idea how it was going to turn out — I was really nervous, really anxious. In the beginning, I wasn’t very productive, and I was in a really bad place mentally — depression and OCD. Then I started getting treatment, medication, therapy, and started to meditate. The whole album sort of marks this journey of me getting to a better place. I’m very thankful for that.

That’s beautiful. Do you feel any pressure by releasing your official debut? Or excitement?

I feel like — not necessarily pressure. I feel anxiety, but also excitement.

Your song “I Like Me Better” did amazing when it released in 2017 but reached major global success after it was featured on To All The Boys. Do you see that as a major shift in your career? How did that feel when it was all happening? How did you process?

“I Like Me Better” changed my life entirely, in the most massive way. I wrote that song in my bedroom. I had no idea it was going to do so well. It’s crazy to just look back and to see it in To All The Boys I’ve Loved Before. That was such a crazy moment. I mean, it changed my life in every single way.

You have a few collaborations in this album — including Troye Sivan, Jungkook and Jimin from BTS, and Alessia Cara. How did these come about?

Every collab happened in its own way, very naturally. For example, me and Troye just met a few times and we were just like, “let’s get in the studio!” We didn’t plan on making a collab; we were just going to write a song. But once we were working on “I’m So Tired” we both loved it a lot, and he ended up singing on it. And that’s how the collab was born!

The BTS collab was supernatural in the sense that I met them at their show in London. It was my first time meeting them, and that’s when they asked me to do the remix of “Make It Right” — that was my favourite song off of that project for them, so I was like, “duh, that’s amazing.” Then I had a demo of my song “Who” — I sent it to them with kind of no expectations, and they ended up loving it. I was super stoked. And they sound amazing on it.

Alessia Cara — we had just kind of met a few times, and then I remember FaceTiming and telling her about the song and she loved it and we just connected on a personal level. Then she wrote her part and sent her vocal. We didn’t get a chance to be in the studio together. And she nailed it, absolutely perfectly.

What did you feel these artists would contribute to each of the songs they are featured on?

I think it’s just a different perspective, you know? I feel like sometimes artists want their first album to be 100% them, but I think — I love being around people, and I love mixing my energy with other people. So I try not to overthink it and just do whatever feels right.

You did a bunch of songwriting for and with artists like Charlie XCX, Celine Dion, Eric Nam… and “behind the scenes” work before “stepping out” on the limelight on your own. Why (and when) did you feel it was the time to pursue a career as a “frontrunner”?

I think I just got to a point where I was more confident, first and foremost, and I was just ready to tell my own stories and to do that. It’s different to write for other people.

Have you ever second-guessed your decision? Or, have you ever wished you’d done it sooner?

I’ve never wished I’d done it sooner. I don’t regret the way things went. Second-guess my decision? I mean, sure. Sometimes I have bad days and I feel like it’s so stressful to do what I’m doing and to be in the spotlight and so on and so forth, but then I get up on stage and I play a show and it reminds me why I’m doing this.

You’ve teased on social media (both on your main IG and on @notlauv!) that there are many songs that didn’t make the album. What can you tell us about those? Do you feel like they’d ever be released?

I hope that every single song that I made for the album gets released someday! I think a lot of them will be. Some of them are very similar to the other songs on the album, and some of them are way different, so I’m super excited. 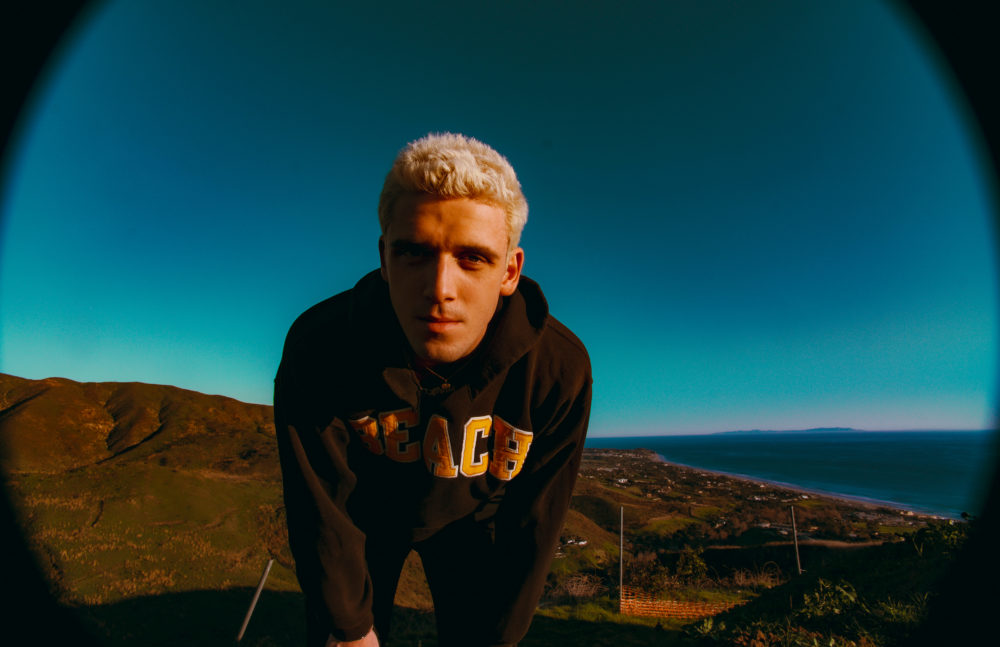 You touched upon this a bit before but mental health is a prevalent theme in the album and, apart from music, you’ve also launched the “My Blue Thoughts” initiative. Can you tell us a little bit about that for people who might have not heard of it? How did it come about and why is it important to you?

“My Blue Thoughts” is something I started a few years ago where I just wanted a way for people who come to my shows to be able to express themselves openly, without judgement, and hopefully anonymously — because that’s how I do that for myself through music.

It started as a little box where people could take a pen and a piece of paper and write whatever was on their minds and I would just share those on my Instagram story for people to see so people all over the world could see stories that were similar to theirs and hopefully relate. Then it kind of developed into this really big thing now where at my shows there’s a booth you can walk into and you can speak. It analyses your voice in any language and transcribes it, and then you can map it out on the world. Then you can go on the website and map it out by keyword, so you can find other people by keyword who are experiencing similar things.

After the album is out, you’re headed on tour and will be gone for most of 2020. Are there any venues you’re excited to perform? Radio City in NYC is quite iconic…

Yeah, I mean… It’s really crazy to me that I’m playing any of these venues, you know? It’s just such a larger level. I am incredibly excited, especially to come to a lot of cities I’ve never been to before!

Last year, you dressed up during your Halloween concert in Amsterdam and greeted fans. What do you have planned for the shows this year?

I have some stuff in the works. I’m not ready to share it yet, but there’s definitely going to be some special stuff happening on this tour…

Going back to the album, you said your favourite song you have ever written (and the one you consider to be most important) is “Modern Loneliness,” which serves as a poignant closure for the album. Can you tell us a bit about that? Why do you feel that way?

“Modern Loneliness” says something that I’ve been feeling for a long time but couldn’t quite articulate. I kind of feel like it came out of the sky for me. I feel like it’s a really important song, because it expresses not only my loneliness, obviously, which is a theme throughout my album — with three songs with iterations of the word “lonely”. Because of social media and feeling like I know of more people than ever, and I see more people than ever, but I don’t really know how they’re doing. I don’t know if they know really how I’m doing and, for real, deep down, who we are. I think that causes loneliness for a lot of people.

Was there a specific instance in your personal life that inspired you to write this song?

Honestly, it was a bunch of instances. It’s every source of loneliness for me ever since I was a kid.

Is there another song on the album that you feel particularly attached to?

I mean, I can’t really choose. Aside from “Modern Loneliness,” I really can’t choose another favourite… I love them all so much in such different ways.

Lastly, what are you most excited about this 2020? Any goals? Ambitions?

I’m just excited to get on tour, to play all these new songs, to bring the new show out, to bring the one-man-boy-band on tour. I’m going to be with my foundation, which is called Blue Boy Foundation. I’m going to be meeting with as many local organisations in the cities on tour and just figuring out how I can get involved.

I’m already working on a bunch of new music, so I’m going to be releasing a lot more new music this year. And yeah, just trying to focus on happiness for myself above all else, and spreading that for other people. 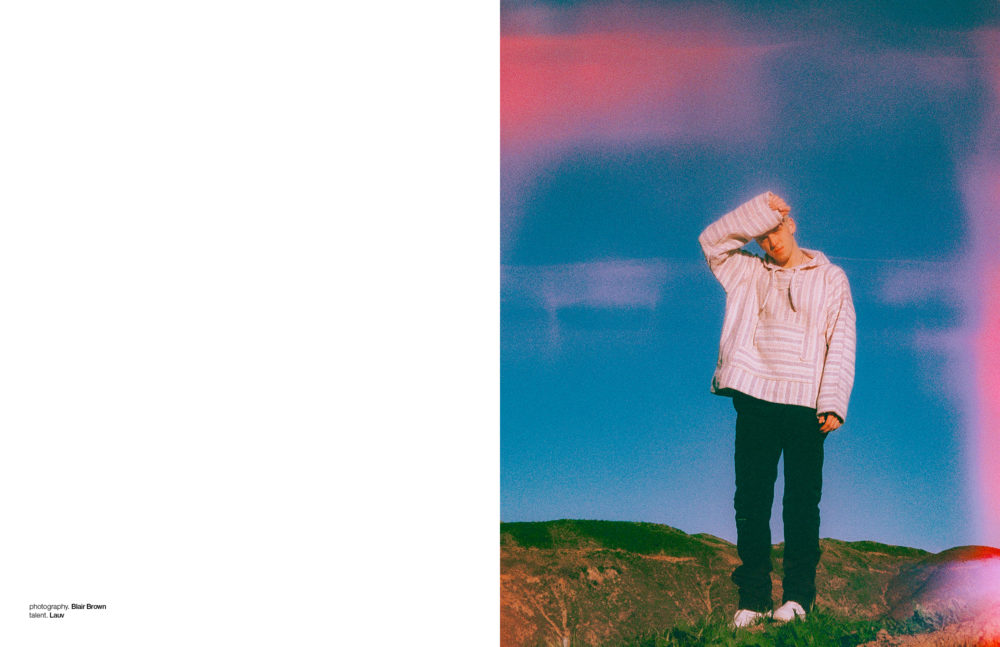 LAUV’s debut studio album, ~how i’m feeling~, is out now. Listen to it here.