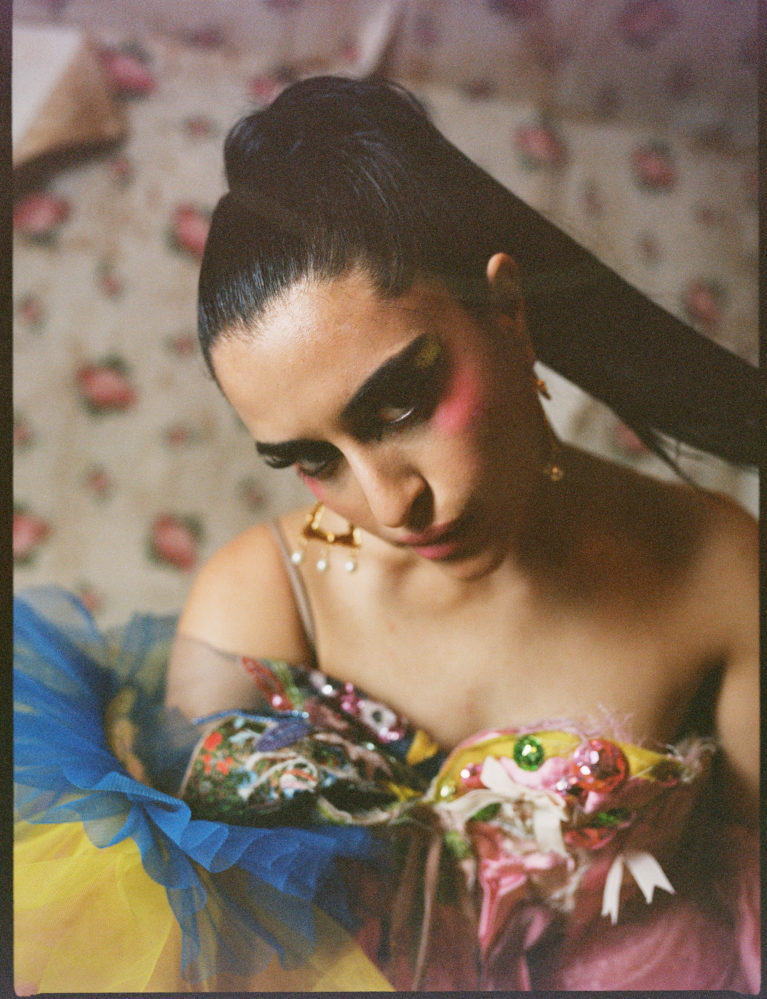 Gia Woods is the Persian pop princess you need to know. She’s not one to shy away from risks. If anything she throws herself headlong into them and it’s certainly paid off. Scouted by her manager during a 2014 high school choir show — which she only joined thanks to her sister’s persistence — Gia decided to forgo dentistry in order to pursue a music career. Her big break was deeply personal. She came out to her “traditional” Persian parents, her manager, and the rest of the world with her 2015 debut ballad “Only a Girl.” The video has since accumulated over 10 million views on YouTube. If that hadn’t already cemented her place as a burgeoning queer icon, her very first show was at L.A. Pride to thousands, who have no doubt joined her legion of fans.

The past few years have seen several queer superstars-in-the-making taking over the charts — King Princess, Mykki Blanco, and Troye Sivan, to name a few. Woods is joining their ranks, having dropped several sultry, unapologetic, and most importantly, genuine singles over the years. While her music gives much-needed visibility and affirmation to members of the LGBTQ+ community, she refuses to be boxed in. Much like queer people have turned songs by heterosexual icons like Cher, Cyndi Lauper, and Lana Del Rey into anthems for the community, and straight couples share their first dance to the score of Elton John, Woods hopes her music can transcend labels and make people feel unabashedly themselves.

Woods’ upcoming debut EP, CUT SEASON, and its accompanying singles come on the heels of a period of personal turmoil —the breakup of a four-year relationship, the loss of her father, and washing her hands with fake friendships and self-sabotaging habits. Perhaps inspired by growing up in celeb-centric L.A., the track Hungry muses on being surrounded by attention-starved and self-righteous people and learning to trust oneself. Its sequel, Ego, examines the power struggles and pettiness that come with a relationship where both partners have big egos. The music video sees a larger-than-life Woods admiring herself in a mirror as she delivers the hook: “you want love and control, but you can’t have both.” Her singles over the past few years have been stepping stones on her path of self-discovery. This EP showcases a Woods who knows just what she wants and needs. Schön! caught up with the songstress to dish on the importance of taking risks, her journey since coming out, and the first step in cutting negativity out of your life.

Let’s start with some background—what are your memories of growing up in L.A.?

I was born into a traditional Persian household. I’m the youngest of three. It’s funny, growing up in L.A., everyone expects to hear I had a glamorous upbringing. Movies and social media depict this amazing lifestyle but that’s not the reality for most people. My dad owned a popular Persian restaurant and my mom handled the business side of things. Socially, I was a really shy kid and didn’t have many friends. I felt embarrassed and anxious because I didn’t really know how to talk to people. My schools were always really clique-y, even within the Persian community. If you weren’t related or Jewish then you were an outsider. So growing up I was a bit of a loner and music was my only outlet. I started spending a lot of time writing songs on my guitar and filling those songs with lyrics about what I wished I had enough confidence to share with people around me.

Do you remember the first time you realised music meant something more to you?

I actually didn’t plan on a career in music. I got really lucky and my manager scouted me during a choir performance in my senior year of high school. At the time I was planning to head to college and become a dentist! I sang a cover of The Beatles‘ “Nowhere Man“ and my future manager just happened to be there. We met up for coffee and they said they wanted to manage me. For me, that was my wake up call. I knew if I didn’t take the risk it’d be something I’d hold onto as a regret. Now the idea of doing anything but music sounds like a living hell.

What song or artist helped shape your current sound?

I grew up listening to a lot of Radiohead, Green Day and Madonna. They’ve influenced me as far as my obsession with pop music and guitar playing. Stylistically, they couldn’t be further apart from one another, but they’ve each had an unforgettable impact on the sound of their time and pushed their genres forward. I hope to do [that] as an artist too.

Your music is very personal. How did you learn to be comfortable with vulnerability?

Since I was so shy growing up music was the only way to communicate how I was feeling. I think that’s why I’m so honest in my music.  Anything I go through I almost always have to write about.

The media is quick to box in LGBTQ+ artists as “queer artists.” How do you feel about labels?

It’s so strange, really. Could you imagine if publications were like “straight artist Camila Cabello” or “heterosexual heartthrob Justin Bieber”? That being said, I understand and appreciate the craving for those in the LGBTQ+ community to feel represented in the music industry. I know what it’s like to not see your story reflected in the entertainment industry so it’s an honor to create art that people feel connected to. But my sexuality is just one facet of who I am.

As an out lesbian pop singer, do you ever feel the pressure to subscribe to a certain narrative, whereas your straight peers may not feel that same pressure?

No, because I always genuinely write about what I’m going through. I never look at it as a narrative. I’ve liked girls for as long as I can remember, so why wouldn’t I write about that?

Coming out to the world, not to mention conservative parents, via Only A Girl was bold. How did it feel once the song and video were out?

Before I released Only A Girl I felt ashamed of myself and my sexuality because of the way I was raised. I’m really proud of that video because I was finally about to be 100% me to the world and finally felt like I wasn’t hiding.

How has your journey of self-discovery been since then?

I think everyone is on a never-ending journey of self-discovery and with that come ups and downs but I’m proud of the woman I’ve become.

Ego is the second single from your upcoming debut EP CUT SEASON. When did you realise you (and the world) were ready to release a full body of work?

During the last few months of summer of 2019, I felt extremely inspired. I was going through a very big change in my personal life. I had just gotten out of a toxic four-year relationship and also lost someone really, really close to me. I felt the most alone I’ve ever felt. People who I considered “friends” also weren’t showing up in the way you’d expect when you’re going through a hard time. I started to notice negative traits in these people I had been close to for years and it was a wake-up call for me. That’s when I started to write Cut Season. I locked myself in the studio and wrote every single day. Each song has a one-word title and that’s when I knew I was onto something. It wasn’t planned, it just happened.

Ego and CUT SEASON are about letting go of the past and cutting toxicity out of your life. What’s your best advice for getting rid of negative energy and moving forward?

The one thing I can advise is that if you don’t have any love for yourself, know your own worth, or how special you are then why the fuck would someone else? It’s a saying for a reason. You come first. Hard stop.

The Ego music video is mesmerising. Can you talk us through the inspiration behind the visuals?

Thank you! It’s a modern spin on “Alice in Wonderland.” My creative director/director Jenna Marsh and I came up with the concept. We wanted the video to showcase me in this tiny miniature house where I’m quite literally “larger than life,” obsessing over myself in egotistical ways. Your expectations are never what you think they’re gonna be and when you’re in a constant state of “ego trips,” you lose your sense of reality.

Visibility is crucial to the LGBTQ+ community. Is it important for you to be the kind of artist your fans can identify with?

It’s very important that my fans connect with me. It should be for any artist regardless of their sexuality. It’s fulfilling to know that some fans may see their struggles with sexuality reflected in my music, and that’s not something I take for granted, but a lot of the artists I grew up idolizing were heterosexual and that didn’t stop me from connecting with them. I don’t think music has a sexuality.

Is there any artist you would love to collaborate with one day?

I’d love to collaborate with Gesaffelstein!

We’re hoping to see more LGBTQ+ artists taking over the industry this decade. Who are some of your current favourites? And who are some up-and-comers that you think should be on everyone’s radar? 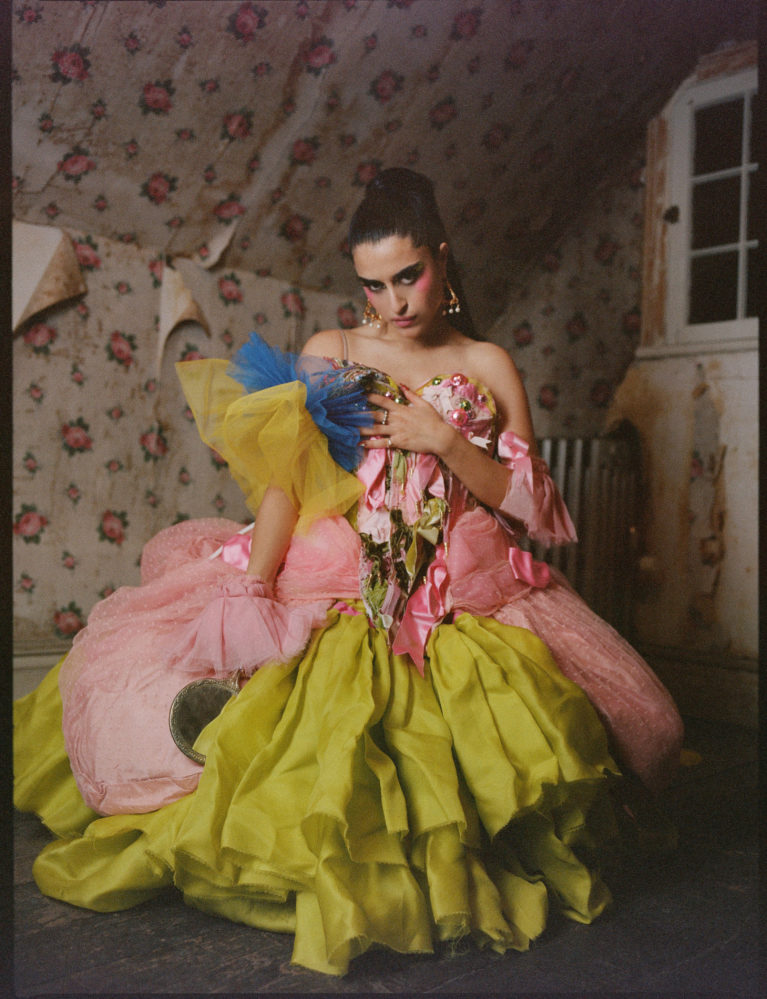