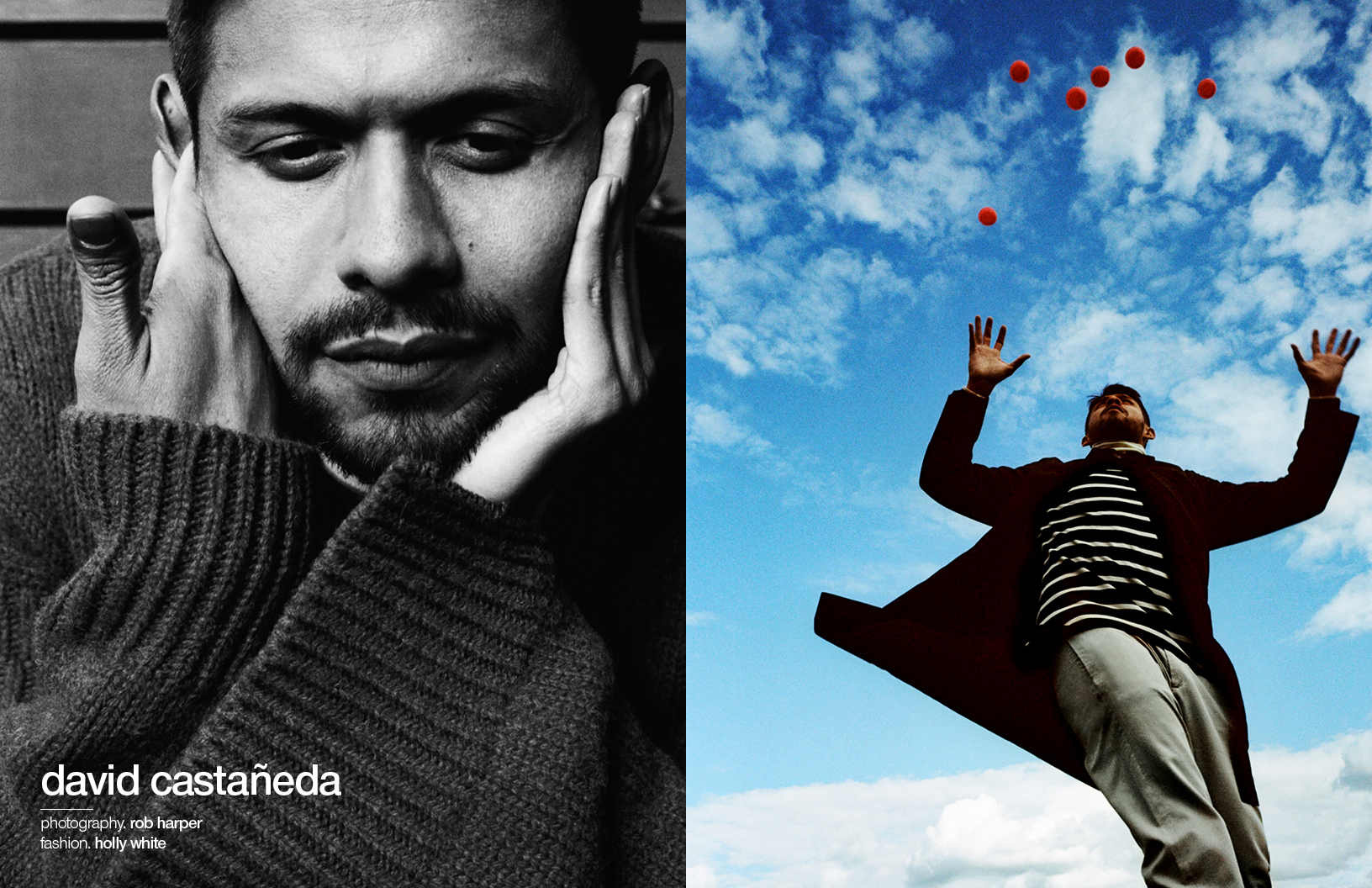 Season two of The Umbrella Academy took its team of troubled heroes into the past — inadvertently bringing the apocalypse along with them. The Netflix Original’s first installment, which premiered in February 2019, had its leads attempting to prevent the upcoming end of the world, but this time around things are a little different. The new season transports both them and the impending doomsday back to 1960s America, placing the group in the middle of a movement for racial justice, the Cold War, and, crucially for David Castañeda’s character Diego Hargreeves, the events surrounding the assassination of John Fitzgerald Kennedy.

But why is a show about justice and conspiracy connecting so well in 2020? “Because it’s good,” Castañeda replies simply. That much is definitely true. The second series has received positive reviews across the board and while a third series is still unconfirmed, the show’s broad appeal — along with the latest series’ cliffhanger ending — has audiences begging for more. “[People] see themselves in these characters,” Castañeda tells Schön!. “Their dynamics with each other are very universal in the world we live in today… and we try to tell [the story] with care and truth.”

Returning to the conspiracy angle, Castañeda says understanding the primary conspiracy motivating his character this series, the JFK assassination, was essential to crafting his updated portrayal of Diego. He confesses that he’s far from a conspiracy buff but in preparing for this season, he “watched documentaries on JFK’s assassination and conspiracies about why and who would want to hurt him.” For Diego, Castañeda notes, the conspiracy runs deeper than just a who-what-where. “[He’s] trying to understand his father, Reginald Hargreeves,” explains Castañeda. “If [Diego] was to save JFK, maybe his father would have raised them differently.” 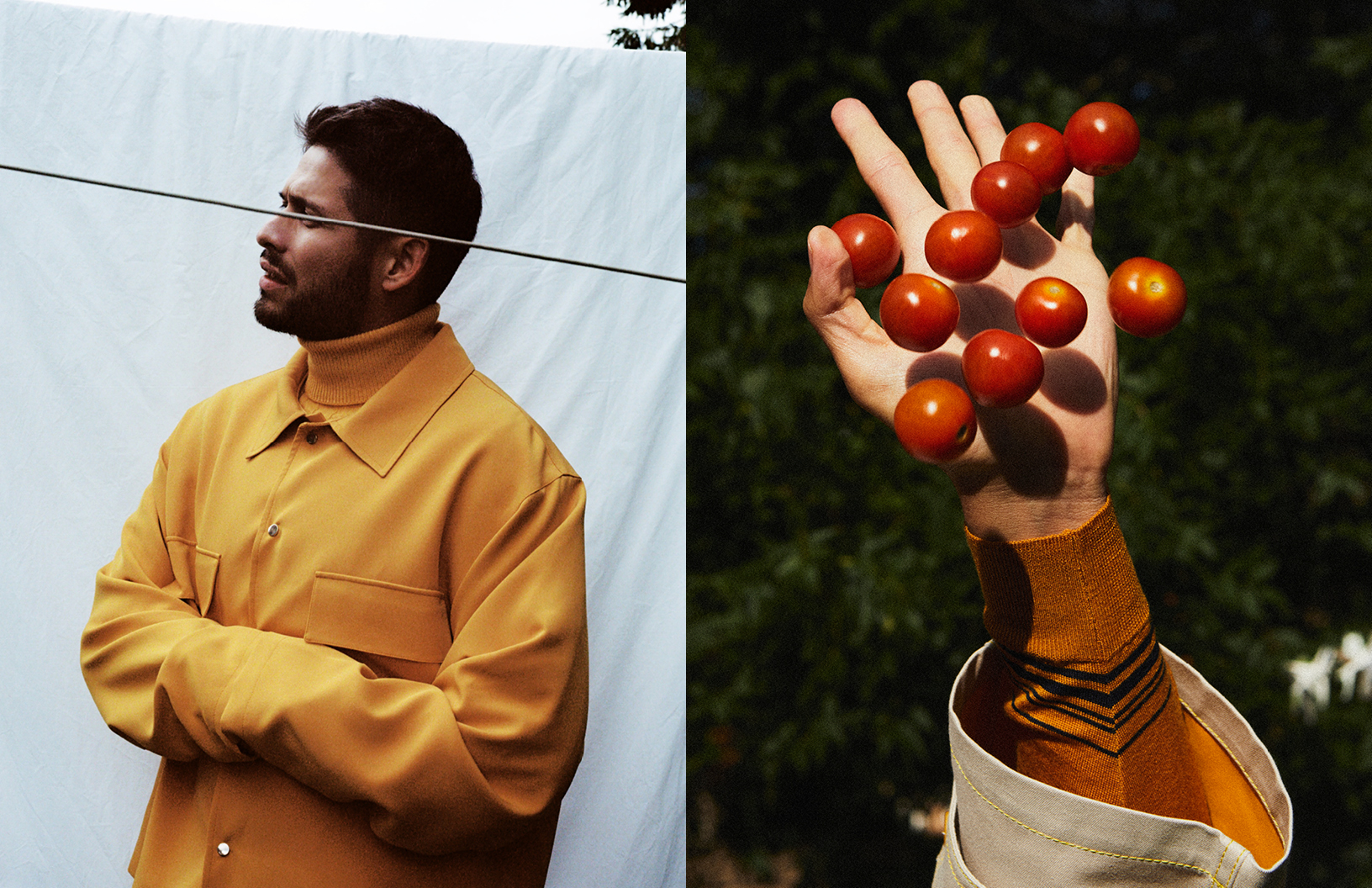 In this series, Diego’s conspiracy obsession is paired with a stint in a psychiatric ward. “I did a lot of research on psychiatric wards [and] what drugs patients were given at that time,” says Castañeda. “I tried to understand what it’s like to go in isolation and what patterns the mind develops when in it.” In this research, Castañeda discovered some key facts about the human mind that would come to deeply inform his character and, potentially, himself. “I found out that when control is a fallacy, the mind can find the smallest thing to control. It can be a safe haven for the individual.”

The psychiatric ward is also where audiences are introduced to the character of Lila, played by Ritu Arya, with whom Diego spends a significant portion of the series. In the show, Diego and Lila’s ability to play off of and work with each other became an instant standout, which Castañeda attributes to both Arya’s talent and the time they spent together off-screen. “We did rehearsals and learned to trust each other in the scene to allow a dialogue before the scenes began,” recalls Castañeda. The result is an on-set environment that allowed for experimentation and natural chemistry to develop. “It was fun and freeing to know I was able to work with someone who is very talented, open, and alive in the scenes,” Castañeda affirms.

Preparation for the second series was markedly different from the first. “I had more time to study Diego this time,” the actor details. “I wasn’t constricted to a few weeks.” Besides the expected choreographic training and script learning, Castañeda took this extra time to immerse himself in the character, even going so far as to travel around the world to better prepare for the role. “I flew to Thailand to train and be in a remote area,” he recalls. This journey was assisted by show-runner Steve Blackman, who provided Castañeda with a framework for where Diego might end up by the end of the series “months in advance” of receiving an actual script. 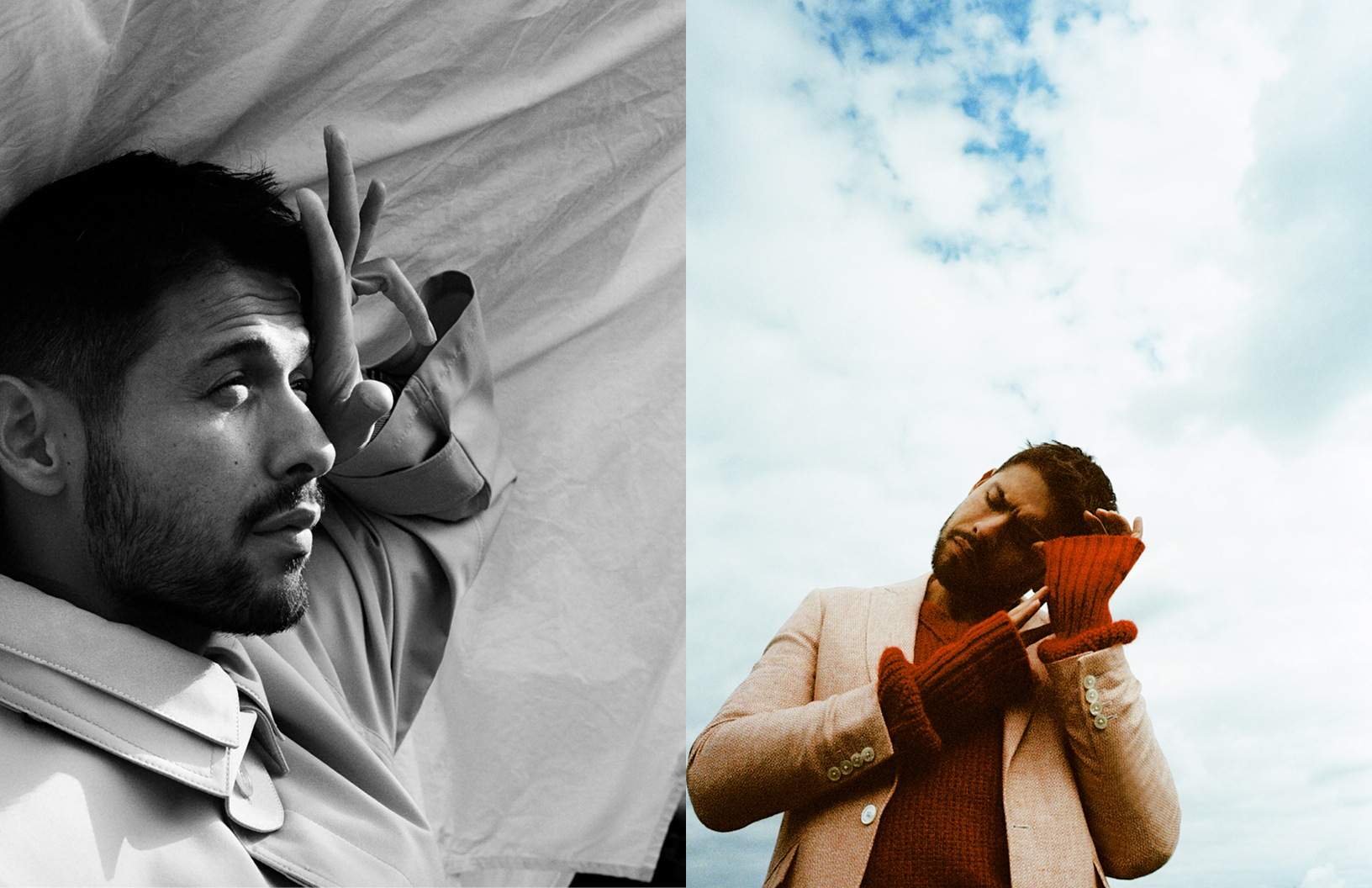 Along with this framework, Castañeda also returned to the comics for inspiration. The comic book version of Diego is slightly different from Castañeda’s portrayal in the Netflix Original. Kraken, as he is often called in the comics, does not have supernatural knife-throwing abilities, only developing knife-throwing skills after considerable training. Additionally, he has another power not yet explored in the show — the ability to hold his breath underwater indefinitely.

Despite these major differences, Castañeda says Kraken served as a good reference point for developing Diego for the series. He latched onto “the quirk of these characters,” picking up on “some of the mannerisms and visuals that I saw [writer] Gerard Way and [illustrator] Gabriel Ba originate in the comic book” along with Kraken’s characteristic “dry humour and angst.” Castañeda notes a specific line from Diego — “I’m used to dealing with liars, but I like it better when I know what they’re lying about” — as a standout from the series. Beyond the book, however, Castañeda had to make Diego his “own.”

Even as Diego changes from the two seasons, Castañeda insists that not one Diego is more fun to play than the other. At the end of the day, “they’re the same person,” he emphasises. Still, giving Diego a second go resulted in some pretty entertaining situations for Castañeda. “A lot” of scenes stick out in his memory but for all the series’ many twists and turns, two moments that emerge as the most memorable for the actor are “the dinner scene with Reginald or the Mexican Consulate.” These scenes were not only fun but also allowed Castañeda to explore territory he hopes he can further explore in a third series. “I’d like to see [Diego] handle a more internal task,” Castañeda says. “Rather than save the world or someone, to save himself.”

Apart from The Umbrella Academy, Castañeda has been keeping busy with other projects. One of those projects is Tax Collector, a crime thriller written and directed by David Ayer and featuring names like George Lopez and Shia LaBeouf. Until that comes out on August 7 — and until The Umbrella Academy is (hopefully) renewed for a third season — Castañeda is looking forward to the simpler things in life: “Hanging in a hammock by a deserted beach, reading a book and having a nice dinner.” 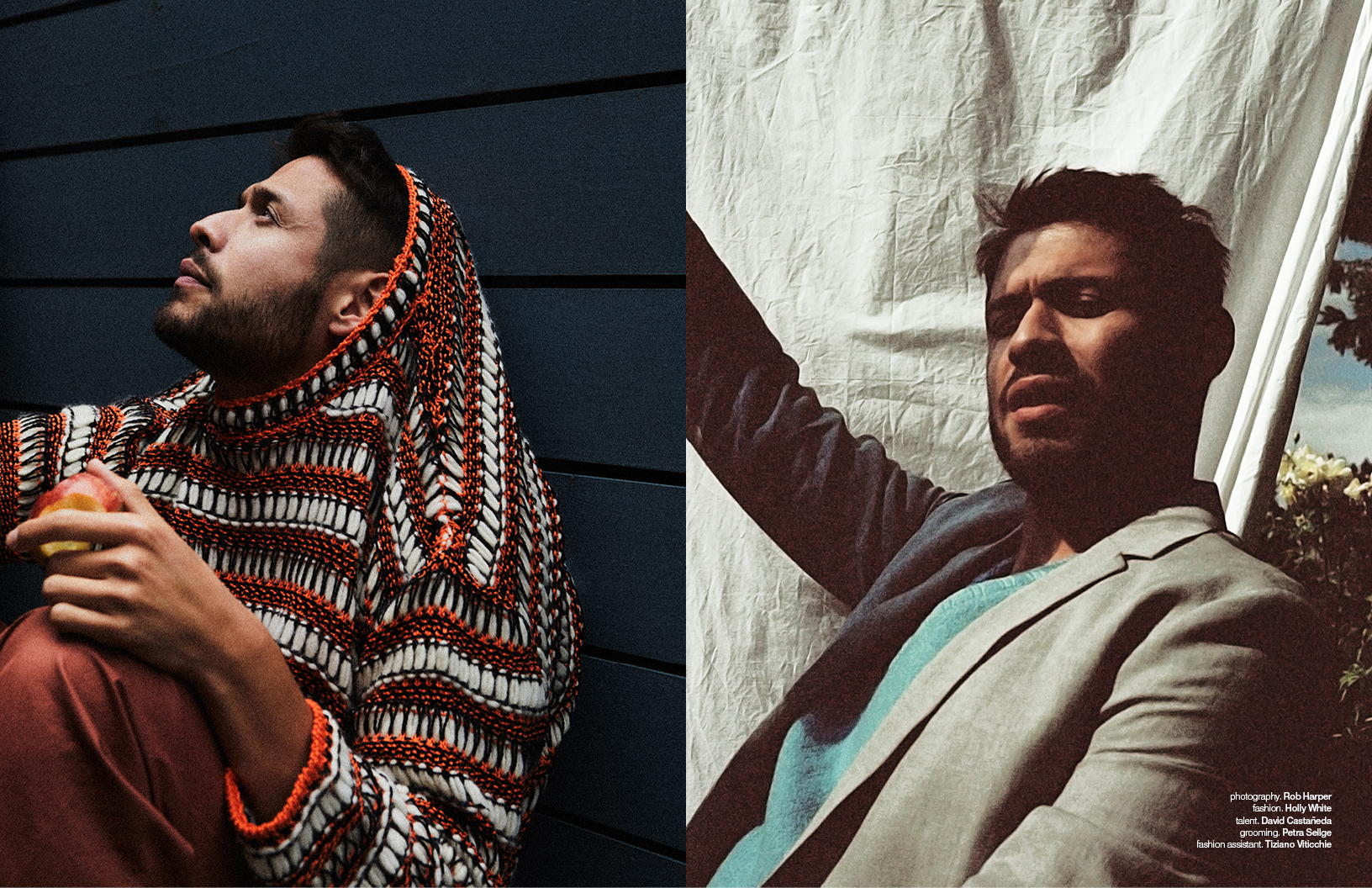 Season two of ‘The Umbrella Academy‘ is now streaming on Netflix. Tax Collector will be released on August 7.