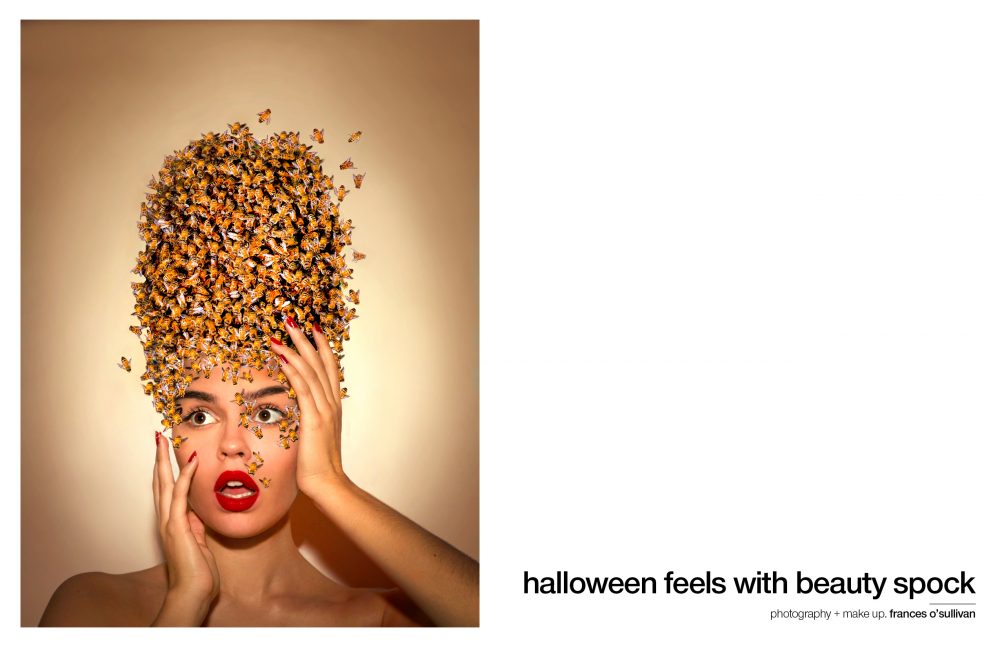 Halloween is just around the corner and Frances O’Sullivan, best known by her artistic moniker Beauty Spock, is more than ready.

A professionally trained makeup artist, model and influencer, O’Sullivan is no stranger to killer makeup looks. The British creative has been dazzling her more than 390k Instagram followers with her out-of-the-box makeup creations for years, with she describes as having “touch of glamour and a touch of the bizarre.” From extravagant pin-up looks to delicate Renaissance-inspired face paintings and foretelling self-portraits, O’Sullivan’s dazzling eccentricity comes from a myriad of references. To celebrate spooky season, she takes things one step further with this Halloween series, presented exclusively via Schön! Magazine. Drawing inspiration and putting together references from Martin Parr, Priscilla Presley, Princess Mombi, James Bond, and 1933’s King Kong — among many others — O’Sullivan transforms herself into different personas just in time for Halloween.

To tie in with the release, Schön! also catches up with the multi-hyphenate to discuss the inspirations behind the series, her journey into professional makeup and her cinematic aspirations.

When did your infatuation with makeup first start?

I feel like I just never really grew out of what I loved when I was young. I still sit and draw strange little characters then dress up as them for no reason. Makeup and costume were the ways I could actually turn that into a legitimate career. I was also always obsessed with horror movies and the theatrics of them, particularly the old ones as I loved how ridiculously over the top they were. I remember trying to do The Exorcist makeup on myself for a Halloween party when I was a kid before I had any idea of what it was about or was even nearly old enough to watch it. 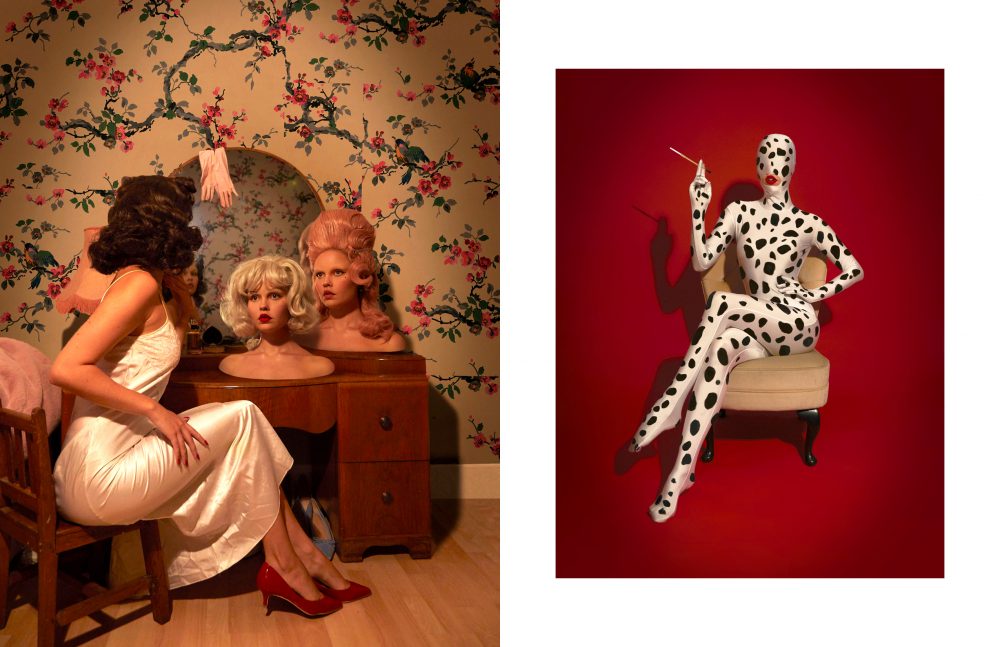 You are a professionally trained makeup artist, having studied hair, makeup and prosthetics at London College of Fashion. When and why did you decide to take your skills to the next level by actually studying at uni? How was the experience?

When I was younger I never even really thought of pursuing makeup seriously. Dressing up and drawing on my face was just something I [did] off my own back in my spare time.  When I first decided to study, I was still a baby that didn’t really have any concept of what I wanted to head for. I eventually realised that experimenting and churning out my ideas was what was going to be beneficial for me as opposed to studying more.

Do you think you’d have acquired the same level of mastery in your artistry had you been self-taught?

Personally, I think that teaching something in a creative industry is a bit of a grey area because other than the technical aspect of makeup artistry, your creative vision is what is ultimately what you need to move forward. It all depends on what specific part of the industry you want to head into but for me personally, I found that the work I was pushing from home was what was beneficial for me.

How did you come up with your moniker Beauty Spock? Can you gives us a bit of a behind the scenes story on the name?

I actually came up with the name years ago, before I had even begun the work I do now. It basically combines the two main themes of my creations, a touch of glamour and a touch of the bizarre. I remember first telling my friends when I came up with it and asked them if they liked it, they said it was awful, so I went with it. 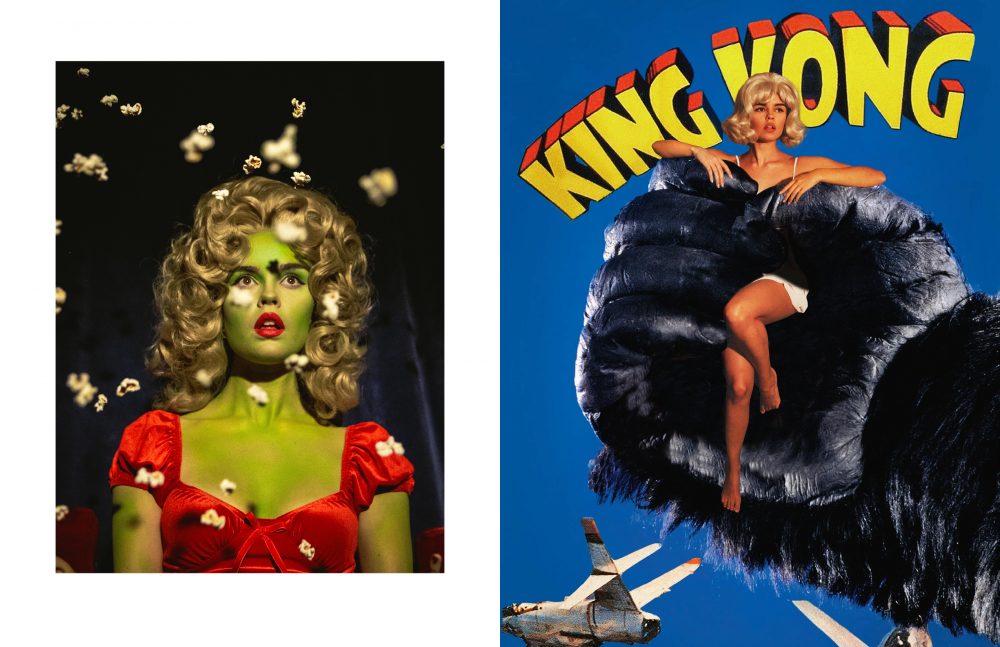 What was your reaction when your first post went viral on Instagram and when did you realise you could make a career out of your passion?

I was very shocked when my pictures first started to become popular, I found it so weird to think that they were haphazardly put together with whatever material I had lying around and props I could get a hold of. Even now, a lot of my work sprouts from me sitting and writing [an] endless amount of ideas in my notebook and trying to get together what I can to bring it to life. I had no intention of becoming “big” on social media but I’m grateful that it’s enabled me to make these silly little projects into my actual career.

You’ve done everything from celebrity transformations to Renaissance-inspired looks. Where do you draw inspiration from to create your looks? Do you have a prefered genre?

My work has always been heavily inspired by Film, which was actually what I was going to go into before beginning makeup. From a young age, I always wanted to do the hair, makeup, costume, direction, filming and play all the characters at the same time. I still do. I would spend so much time watching movies over and over again and as soon as I got my first camera I was off. In terms of genre, I have always tended to steer towards vintage aesthetics and am just fascinated with old photos and videos, which comes across a lot in my own work. Overall, I just love experimenting with fantasy and channelling caricatures of real people. 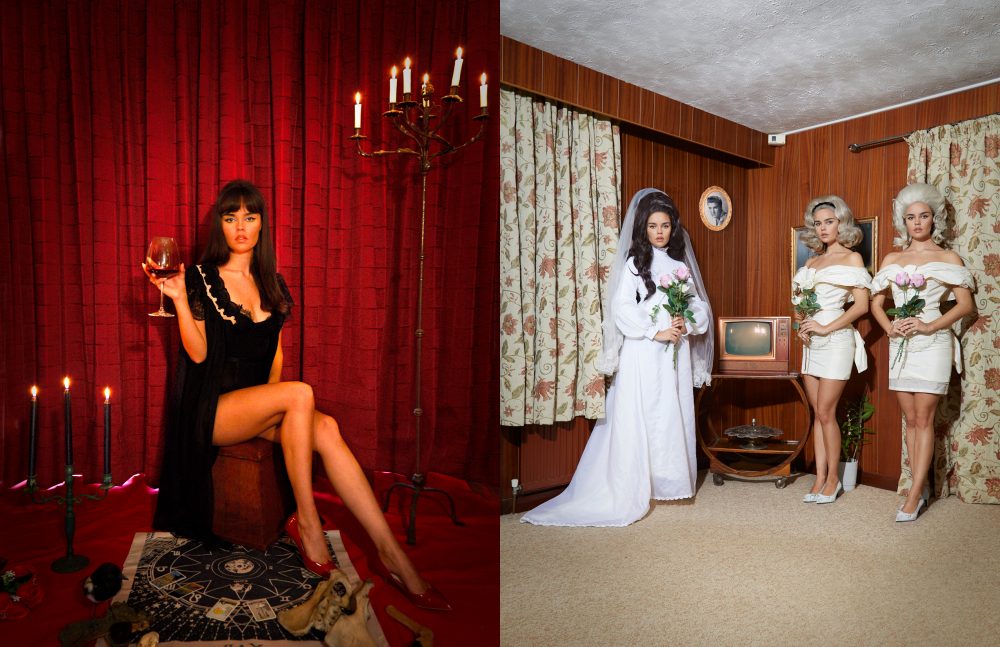 To celebrate Halloween, you’ve decided to turn yourself into multiples personas. Why did you decide to do this series?

I have always loved the idea of self-portraiture and seeing how far I can push myself into becoming something else. As horror is something that is such as big influence to me and what I do, Halloween is always when I feel I can really spread my wings creatively.

So have you always loved Halloween?

As a kid, I would just count down the days until the next Halloween when I could finally leave the house as some extravagant character I’d come up with. I would just love to go and tell my 13-year-old self that when she gets older she’s going to make a living out it.

Is there a particular message behind the series?

I wouldn’t say there’s any particular message behind it, rather a look into little segments of what a horror film of mine would look like.

Can you talk us through the process of creating some of these looks?

A lot of the time, physically constructing a look can take me five minutes. But getting the picture exactly how I envisioned it, having the set, props, camera angle, lighting, positioning and mood perfect is what takes me hours. 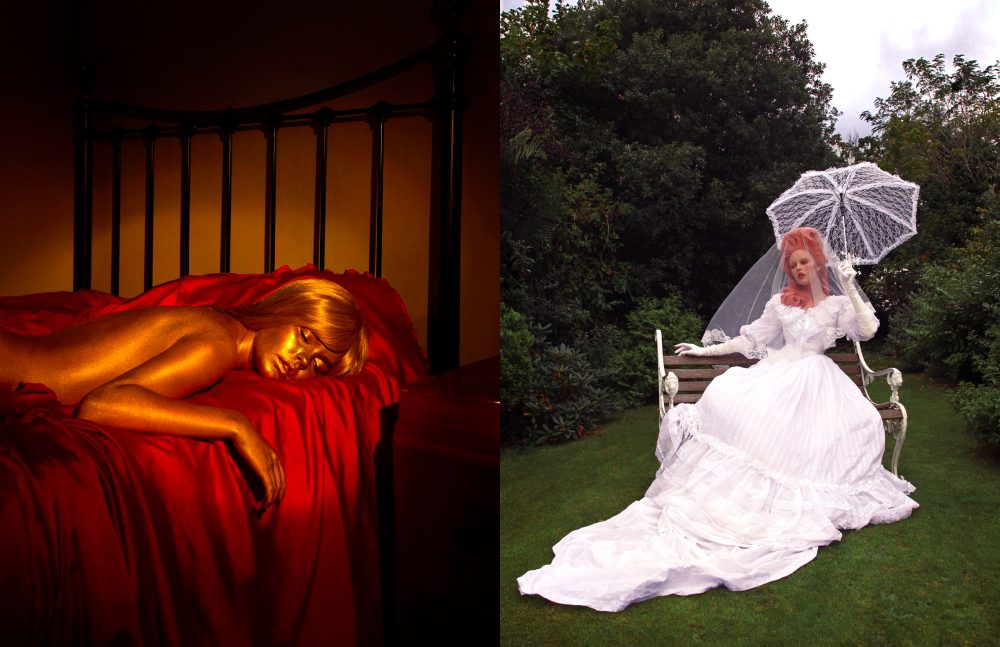 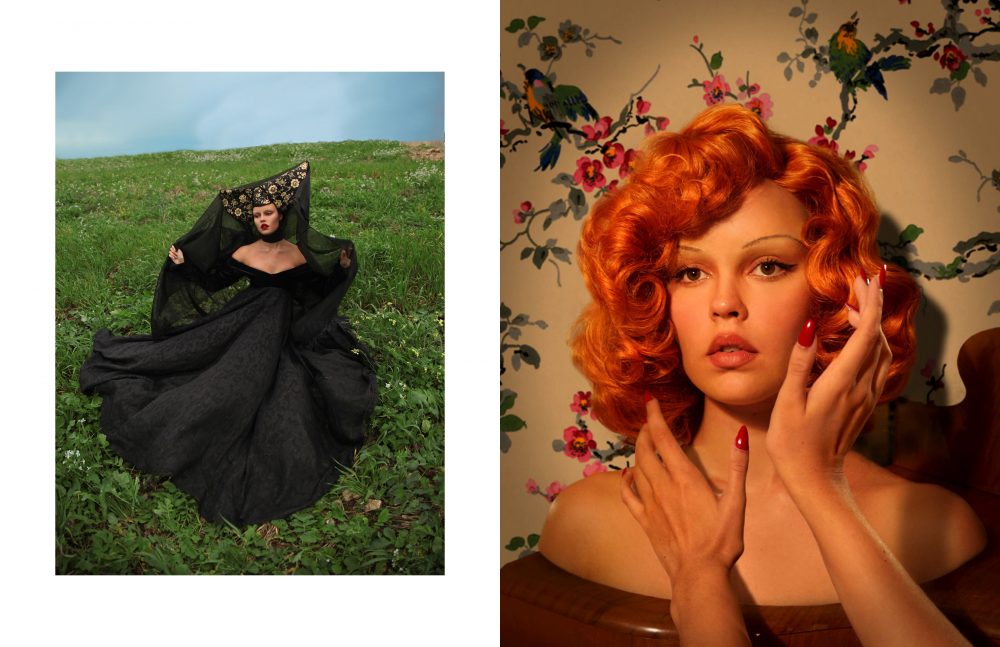 Do you have a favourite from the series?

I think I have two favourites of the series, one being the wedding shot with the bridesmaids. I have always had an obsession with those old ‘60-’70s living room shots with that unflattering, harsh lighting and everyone looking really morose. Creating my own version of one of these was always on my to-do list and doing it as part of my Halloween series seemed fitting, especially as they always have seemed to have that lifeless, eerie feeling to them.

The other favourite is the image of me getting ready with multiple versions of my heads on my dressing table. I remember watching Return to Oz when I was a kid and being obsessed with the scene where Princess Mombi walks through a hallway of all of her interchanging heads on stands. I think that now, I see myself a lot like that when I’m getting ready.

What about overall? In your career, is there a look you’re particularly fond of looking back?

Looking back at my work is always something I avoid as I am always thinking of something I should have added or done slightly differently. But if I had to pick out something it would probably be a look I did with the first wig and prosthetic piece that I’d made from scratch. 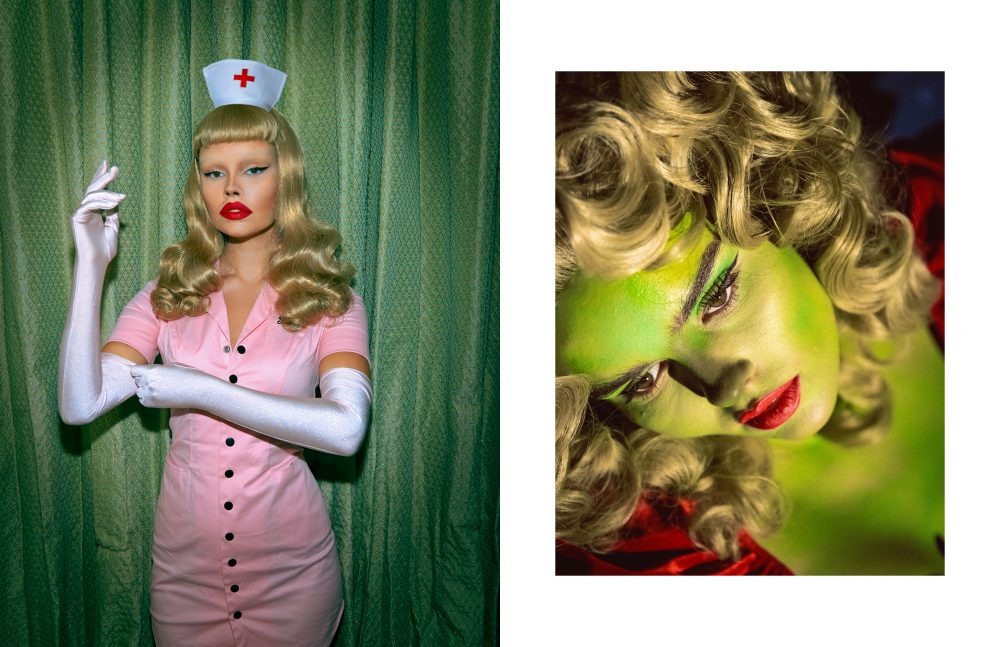 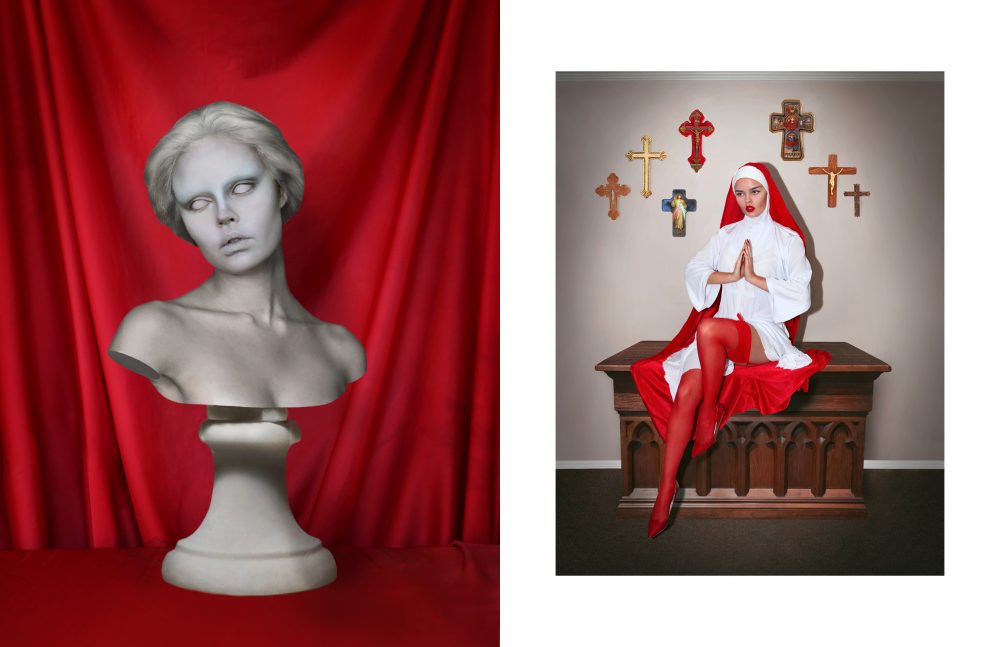 The series is completely produced by you — from the makeup to the pics and the styling. Do you enjoy working on your own?

As much as I love working with a team of creatives, I have a love for working on every part of a set so working by myself especially on projects like this is something I really enjoy.

How do you manage wearing all the different hats yourself? Is there something you find particularly channelling or rewarding about the experience?

I find it the most enjoyable part of all of it. Again, being able to work with other creative minds and all bounce off each other is amazing but on projects like this, I find working almost completely alone is how you truly execute your vision as you first saw it in your head. Also, this is the way I had to work first starting out so have really gotten used to it now.

How do you wish to push the envelope further and keep reinventing yourself with your future creations?

I have a couple of projects coming up where I will be getting back into directing, which is what I was doing before I even began to pursue my makeup career. I haven’t had many opportunities to put my ideas into film so I’m really excited to explore that new avenue.

Do you have any advice for creatives that might feel inspired by your work?

My only advice would be to just go for an idea. Whenever I’ve come up with something new, I don’t let the logistics hold me back on following through. If I want to have an image of someone driving a pink Cadillac in the sky but have no budget, I’ll find a way to make it work somehow. Actually I might do that next. 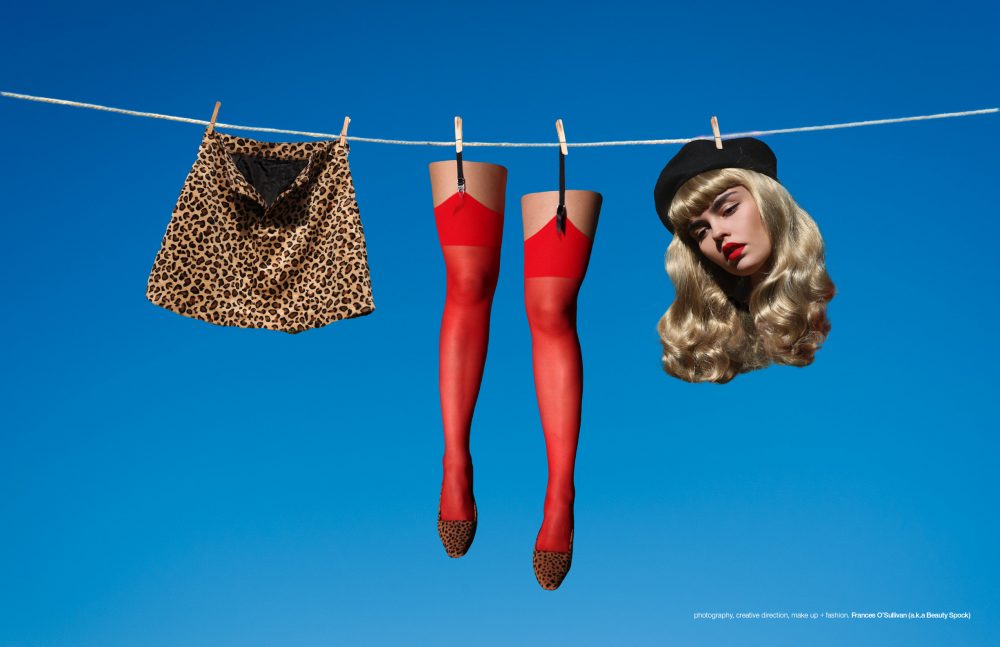