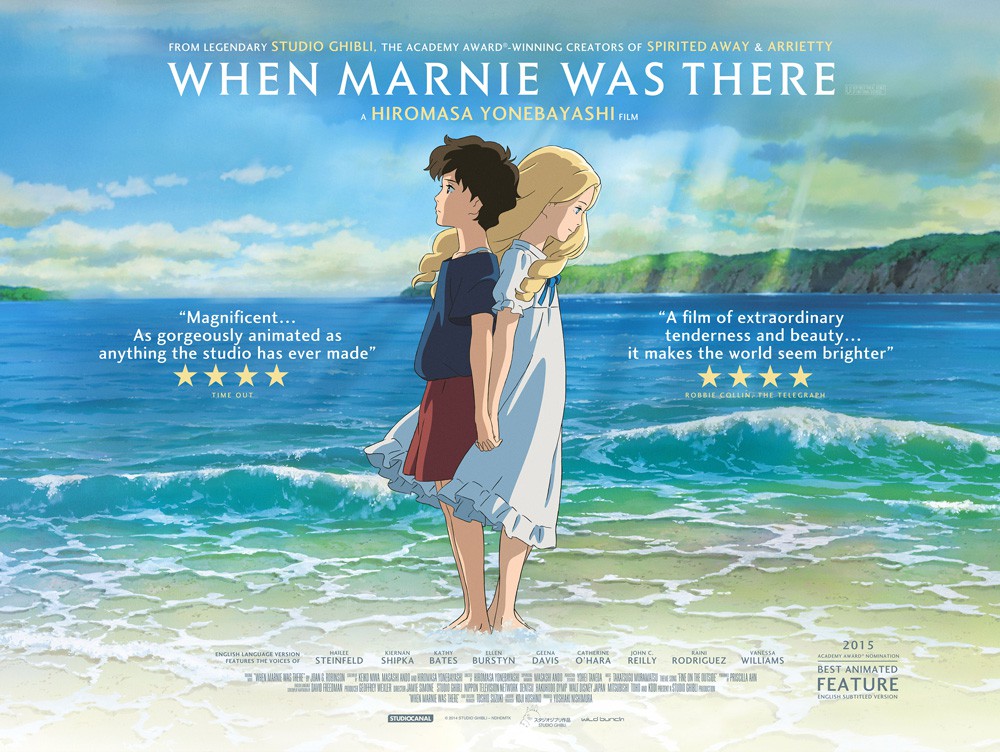 Studio Ghibli’s newest film, the final work of gifted animator Makiko Futaki and a gorgeously animated tale of love, friendship and loneliness, When Marnie was There, is in cinemas this Friday, screening in both Japanese and English. The English dub features a star-studded cast including Mad Men’s Kiernan Shipka, Hailee Steinfeld, Kathy Bates, John C. Reilly and Ellen Burstyn to name just a few.

With When Marnie was There rumoured to be the Japanese animation powerhouse’s final film, a retrospective season Studio Ghibli Forever is currently in selected cinemas, showcasing on the big screen some of the studio’s finest work over the past 30 years.

If there’s one thing Studio Ghibli loves, it’s food. Lovingly animated and guaranteed to make you hungry, the food in Ghibli films is always memorable. We’ve taken a look at some of the most affectionate homages to cuisine in the most memorable Studio Ghibli films, and where Londoners can eat them for real.

The steamed buns in Spirited Away 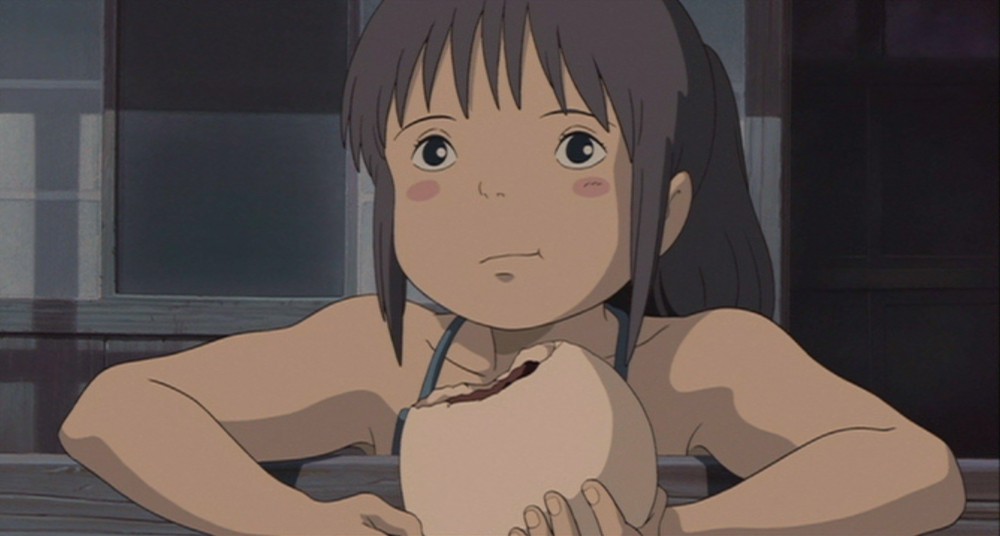 Soft, doughy pillows the size of Chihiro’s head and filled with a rich bean paste, these dumplings look like carb heaven. You can make them yourself by rolling red bean paste into balls and steaming it inside dough. Or, failing that, you can pick some up at WA Café in Ealing. A cosy, independent patisserie, its menu boasts a selection of cakes, breads and teas to give visitors an authentic Japanese experience.

The tempura shrimp in From Up on Poppy Hill

Look at that crispy, golden batter sizzle! If you want to try reputedly the best prawn tempura in London, head to Zuma in Knightsbridge, which offers a sophisticated twist on the traditional Japanese Izakaya style of informal eating and drinking. It not only promises delicious food, but also boasts an interior designed by Tokyo’s esteemed architecture company Super Potato, and if you’re not in London, Zuma has locations in a number of cities around the world. 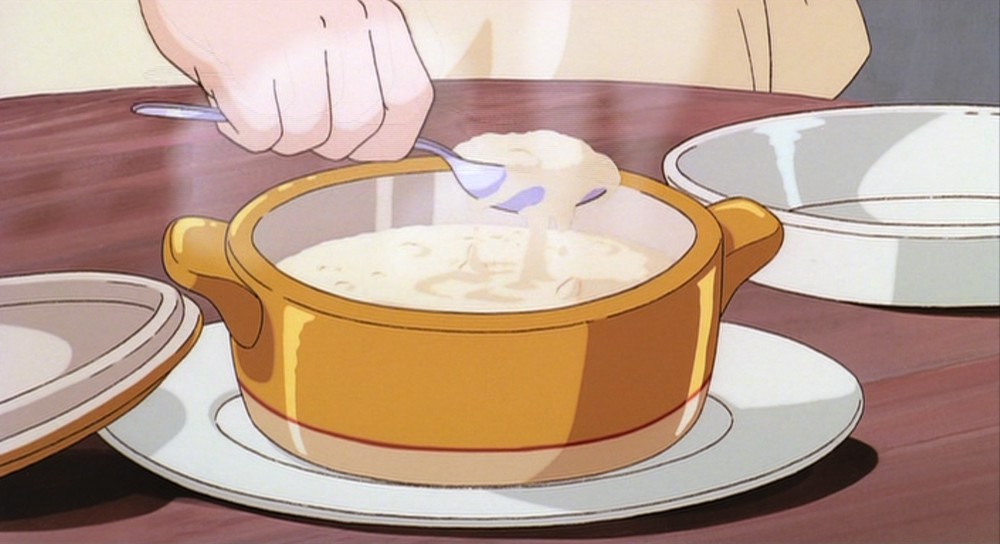 This looks as hearty and comforting as a cuddle in a cardigan. Admittedly there isn’t a huge selection of rice porridge available in London, but Nopi on Warwick Street offers a delicious breakfast of black rice porridge with coconut milk, banana, and mango. Or head to Opso in Marleybone for a Greek version of rice porridge, infused with earl grey tea, cinnamon-hazelnut crumble and orange jelly.

The Bento box in My Neighbour Totoro 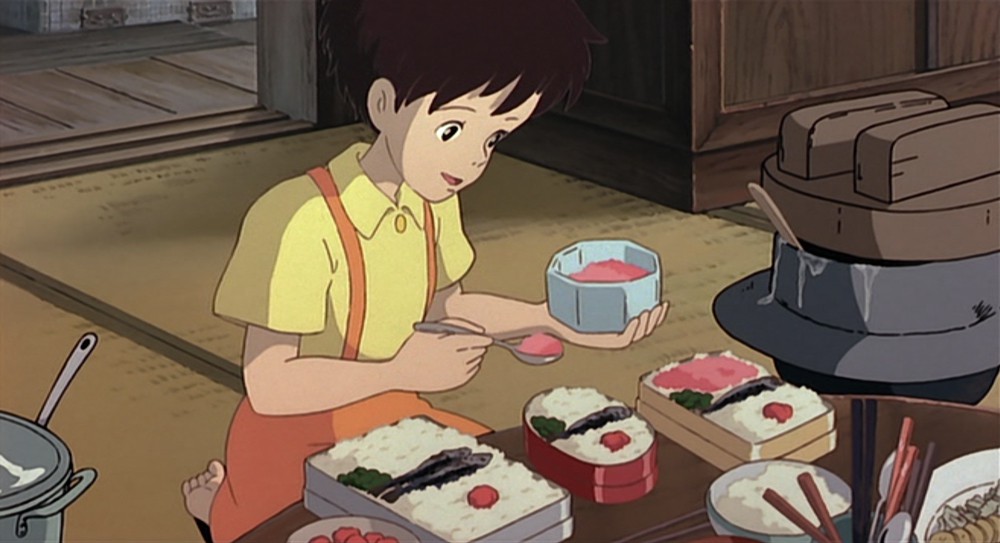 So vibrant, so satisfying, so compact. For your own Bento Box, head to one of Eat Tokyo‘s six London branches. Winner of the 2013 Sushi Awards, the chain also offers set menus and sake. Or, if you live within three miles of Battersea, head to the aptly named Bento takeaway for a vast selection of Bento Box fillings delivered quickly to your door.

The salmon dish in Porco Rosso 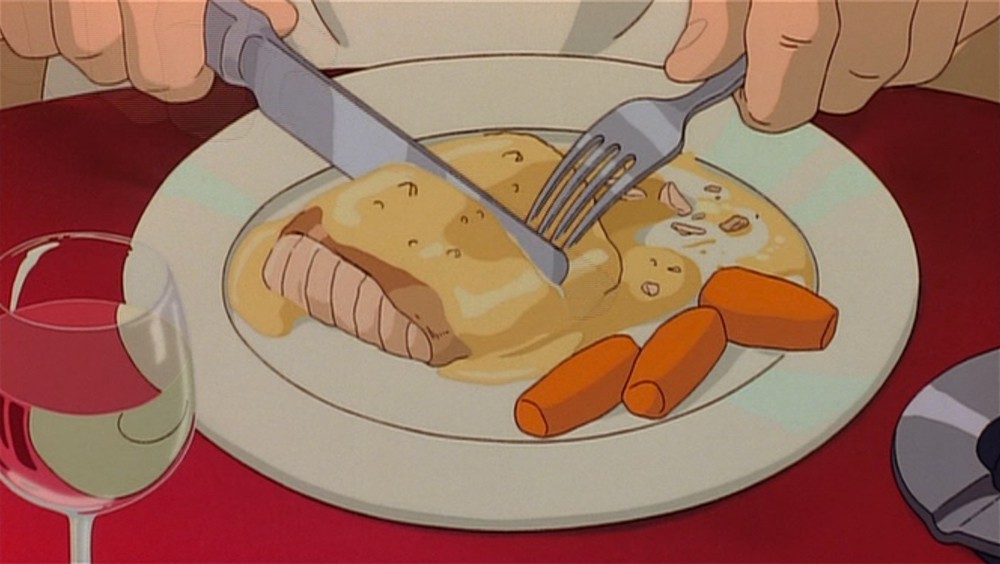 We’re pretty sure that’s a creamy Bechamel sauce over a juicy poached salmon, and we need it now. Luckily for us, it’s a dish that can easily be made at home. This recipe outlines how to make the sauce with limited ingredients, whilst this one provides a cheesier alternative for when you’re feeling a little more adventurous in the kitchen…

The bacon and eggs in Howl’s Moving Castle

The sizzle of the bacon! The glossy egg yolks! We’re not surprised that Markl wolfs that breakfast down. For the classic dish done well in a friendly, relaxed atmosphere, head to No67 in East Dulwich, an independent café and restaurant within the South London Gallery. At weekends, brunch is served all day.

When Marnie Was There is in UK cinemas in Japanese and English from 10th June.