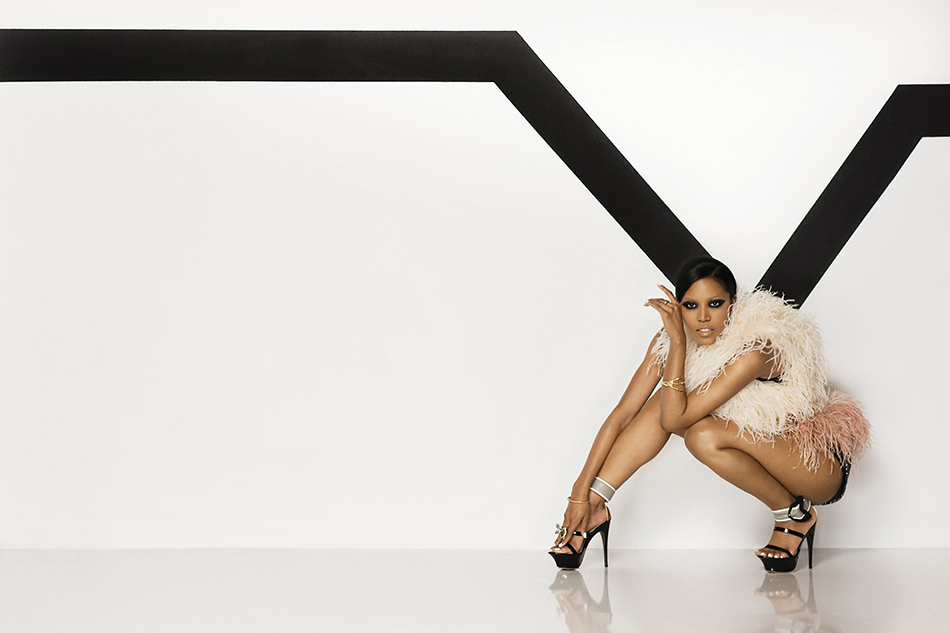 Half Korean, half American Ameriie is still the same Amerie. Purveyor of get-up-and-throw-down R&B soul, her tracks 1Thing, Gotta Work and Take Control are flawless examples of funk pop. Ameriie, however, hasn’t released an album since 2009.

Despite her huge success in the mid ’00s (which included Grammy nominations and top 5 hits across the world), has somewhat struggled behind-the-scenes. Leaving her label Columbia in 2007, she embarked on a deal with Def Jam, only to leave in 2011. Now, as an independent artist, she’s about to release Cymatika Vol. 1, and a rejig of the album that never made it to North America on its original release, Because I Love It, which she fondly refers to as “BILI”, as if it were her daughter.

With her new single due, What I Want, which samples the butt-shaking percussion of Apache by The Sugarhill Gang, Ameriie sits down with Schön! to talk about independence, vibrations and the double standards behind that “difficult artist” reputation.

What I Want is an enormous record – the trumpets, the vocals, the bongos – everything feels like it needs an exclamation mark after it. What made you decide to use it and what was it like working with such an iconic beat?

My husband [and manager, Lenny Nicholson] produced the record and he knows me more than anyone  as a person and as an artist. He knows how I feel about hip hop and breakbeats. So he said, ‘what about this idea’ [of using Apache]? A rapper would rap over it but it’s hard to think about how to approach it singing wise. I’m like, ‘wow, this is hot but I don’t know what to do with it’.

Eight months go by, I’m thinking maybe I need to bring someone else in to write the song. I was like, ‘I don’t know! I don’t know!’ then one day it hit me. I hear it and it’s right.

What I Want is to be on BILI, but you have another full album in the form of Cymatika Vol. 1. What’s the difference between them?

I thought about creating one album, like side one, side two, but I was like, they’re different projects, just the feeling, the sounds… I don’t want them to be the same. BILI has hip hop elements, but it has a lot of new wave. Cymatika is kinda taking the bulk of BILI but the vocal approach is very different, it’s a cinematic, large sound.

Although it might feel like choosing a favourite child, which do you align yourself with more at this point in your career and life?

It’s hard! I would say Cymatika probably, because it has a particular feeling and there are things I wanted to do conceptually with the melody and lyrics. Even though Cymatika is representative of where I’m at and where I wanna go with art, What I Want – that’s always where I am. The records that always feel like ‘I will perform this all my life’, they’re my soul records and I never get tired of them. 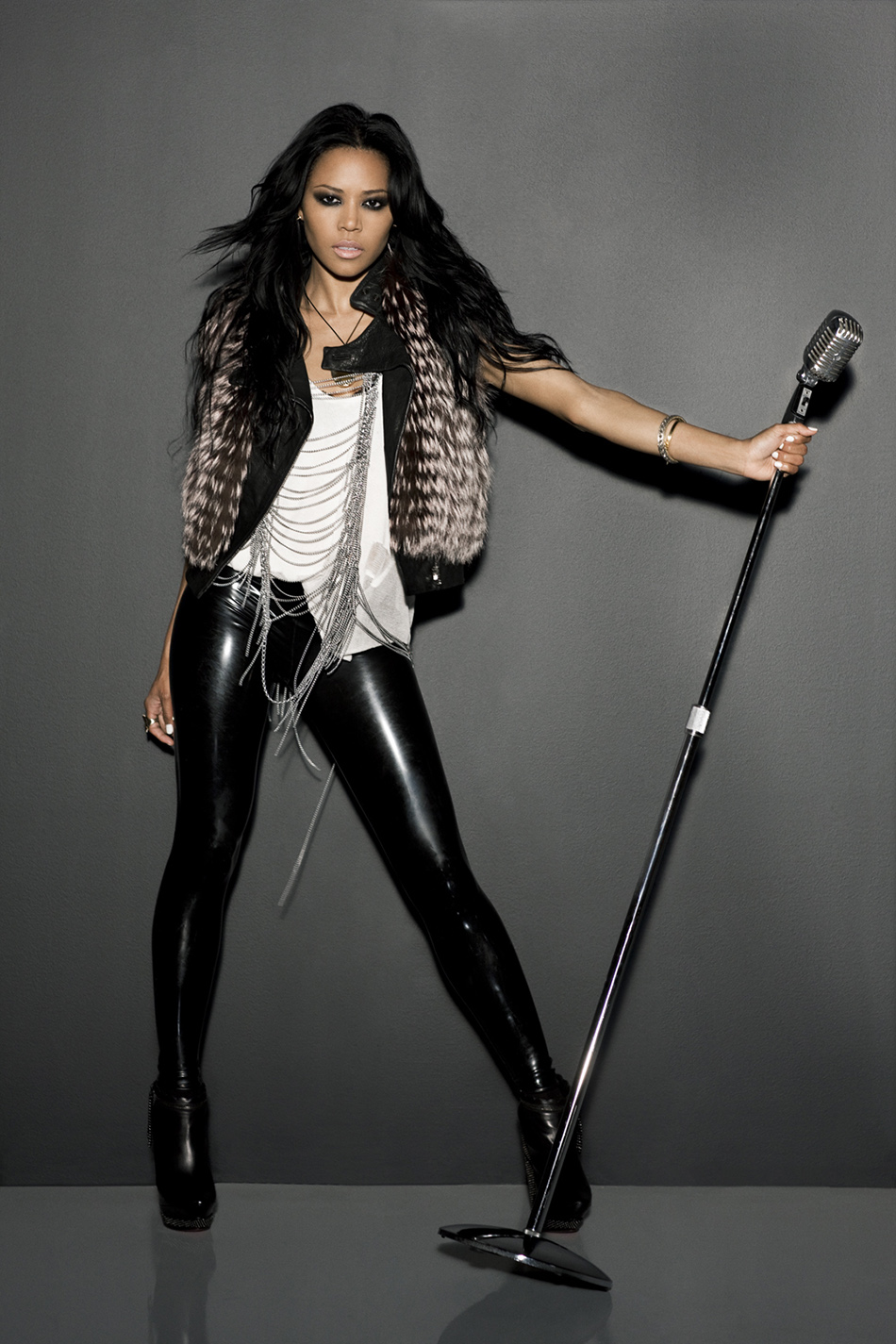 You’ve often spoken about the philosophy of vibrations, the study of which is called cymatics (hence the album name). Why are you attracted to this?

I do believe everything is vibrations, our thoughts, how we interact, what we say, music and what it can do for people. Vibration and energy, that’s the foundations of who we are and what it means to be human, and as an artist or singer it’s kinda like you’re putting out all this energy. People say, it’s just music, and music doesn’t make people do things and I’m like, ‘yes, it does’. I remember being in high school and a certain song would come on and you’d feel like you wanted to get in a mosh pit or in a fight, music can tap into really primal things. I don’t take it lightly. I wanted to tap into something elemental with vibrations and that’s where the concept comes from. I don’t know if it makes me a better artist, I’m just trying to pay attention to it.

You’re co-producing your own work, you write and create everything you do. Does that sit better in terms of working with people now that you have your independence?

Almost 100% of producers are men. I co-produce, but I like to work with people who are enthusiastic about creating. To me, the most fun is in the studio, but I’m not interested in working with people who see a female and think ‘oh, you don’t have anything to say, I’ll make you a song and you just be cute and sing it’. I’ve been accused of being difficult. One of the label heads said to me, ‘you have a reputation’. And I was like, that’s funny ‘cause everyone I work with says, ‘it’s been a great experience’. And they’ve said that because we’re going into it like, ‘let’s create together’.

If I bump into someone who looks at me as just a female they can control… . I’m not in this just to be a singer. So if you don’t like me having an opinion, we’re not going to get along. And that’s where the difficult thing comes from. It’s a double standard.

All this freedom does mean that there’s an increase in responsibility. How does that feel and how has it changed the way you work?

I kind of always did it myself. Even with 1Thing, we serviced that ourselves, we paid for that. We just always felt like we were doing it on our own and now we are. It takes a team to make things happen and we’ve always had great people we’re working with but there was red tape. Now we’re actually working with the same people, without the label, and they’re passionate about implementing ideas. I’ve always been so much about “my way” but I didn’t want to offend people. I don’t want to demonise a label but I’m like, I’ve done that. I don’t miss it.

Ameriie’s new single What I Want is out August 10th.