Gifted from a young age, while most 10 year olds would loathe being dragged around museums by their parents, Mike Dargas was inexplicably drawn to visiting museums and discovering art. At age 11, he was sitting in front of Cologne cathedral in Germany — painting the paved roads in front of him for pocket money. Finally, after around a dozen recreations of the Mona Lisa, Dargas decided to enroll in an art institute. Graduating after only a year and a half as the only child in a classroom of adults, Dargas moved on to various art apprenticeships until he wounded up in the tattoo parlor. Although initially building himself a glowing reputation in the tattoo scene, Dargas’s prodigious skills range all the way from woodwork sculpture to oil on canvas.

Dargas pulls inspiration from artists such as Dalì, Caravaggio and HR Giger — as he has studied various techniques and eventually developed a passion for realism. The Hyperrealism Master is making his long awaited solo debut in the London Opera Gallery next month. 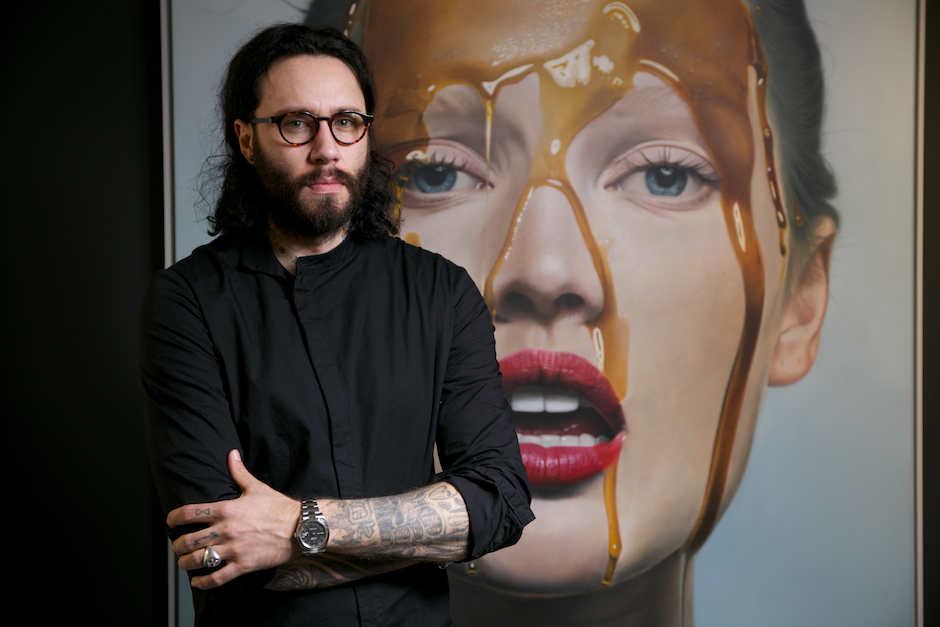 Honing his craft of hyper-realistic portraiture in a tattoo studio for over a decade, Mike Dargas initially caught the attention of director of the Opera Gallery in London, Jean-David Malat, via Instagram. Malat says, “When I saw his work, I immediately flew to Germany to meet up with him. It is now 2 years later and I am extremely proud and filled with happiness that Opera Gallery is able to represent him for his first solo exhibition in London.”

For the past couple of years, Dargas has focused on mastering hyperrealism. As a result, he has created powerfully photographic oil paintings— to the point in which you can’t tell which is the photograph and which is the work of art. His most recent work centers around striking portraits, typically covered in some high viscosity fluid. Pushing oil painting standards as far as they go, Dargas perfects his photorealistic techniques in large portraits. When asked why he prefers oil painting, Dargas replies with, “in the best case, my artwork will still be there in 500 years.” We believe Dargas is well on his way to living over 500 years, and eventually becoming one of the Old Masters he has studied since childhood.

Premiering at the Opera Gallery, Mike Dargas’ solo exhibition will run from the 6th to the 20th of July, introducing his work to the contemporary London art scene.