Creatives have faced limitations since the beginning of time — be it the standards of religious organisations, society’s moral guidelines, or managers who seek to influence their clients for personal gain. While COVID-19 now poses an unprecedented risk to artists globally, in times like these, we need art more than ever.

A live vulture serves as a metaphor for the malicious forces that take advantage of artists in their moments of vulnerability. The bird of prey circles above his studio menacingly, perching on the canvas as Wolf paints. Despite this lingering threat, Wolf ultimately comes face to face with the bird and incorporates it into a stunning new work, demonstrating that his art is the most powerful weapon in his arsenal.

Schön! caught up with the artist to hear his best advice for young artists, his hopes for the post-COVID creative landscape, and what it was like to allow a film crew (and a vulture) into his studio.

What initially inspired you to work on this project?

Unfortunately, the manipulation and exploitation of artists are all too common of an occurrence, both historically and today. I personally know several artists who have suffered from this fact, yet it is a subject that is not spoken of enough. As a realist painter myself, I found it rather poetic that I be used as a symbol of this reality.

It was important that I help the film’s crew bring this message to the fore; that the well-being of the artist remains paramount; that regardless of the obstacles or the depraved actors, there is one thing that they can never truly possess: our art! It also helped that I loved the script and the vision, so I was thrilled they asked me to be a part of it. 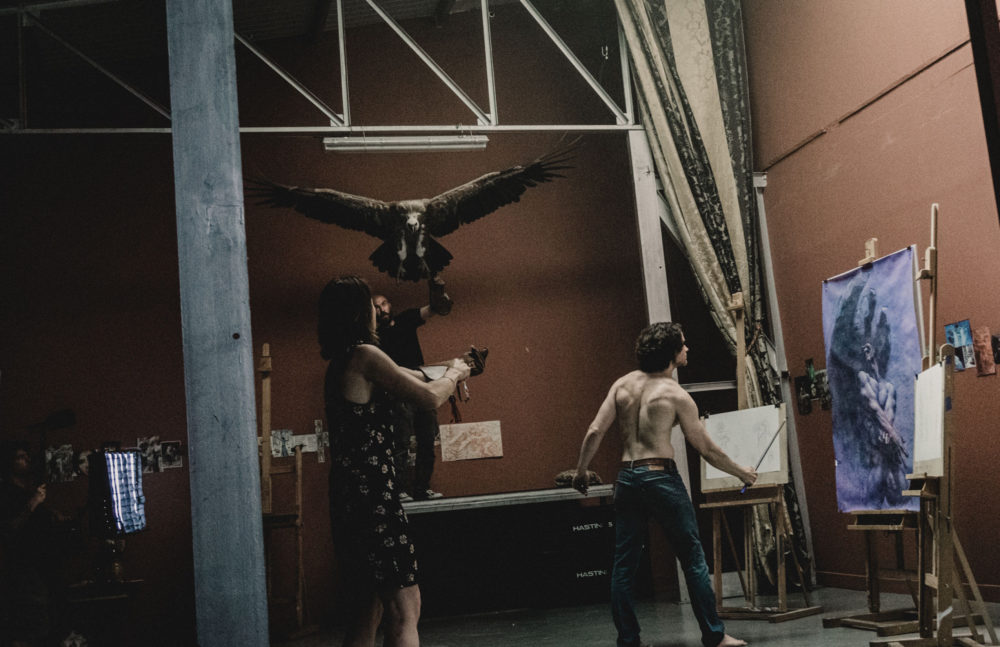 As a figurative painter, were there any challenges in playing a role in this short film? Have you always felt comfortable in front of the camera?

Part of the challenge was maintaining my concentration with a massive vulture lurking behind. Also, this was my first time on a set and it was wonderful to discover what it entails: the technical aspects, listening to directions, and seeing first-hand the amount of work that goes into it. Honestly, in the limited experience that I’ve had in front of the camera, I’ve always felt rather comfortable. However, the voice-over experience was difficult and a bit intimidating. For the nude scenes given that we shot during a massive heatwave, I was probably the most comfortable person on set.

The studio space is sacred for many artists — were you comfortable from the get-go with allowing the film crew into your artistic space or was it more of a gradual process?

Good question. It’s very true that I’m very protective of my studio space, but I was reassured by director Nabil Senhaji’s vision and his sensitivity to my work. Every member of the crew was also very respectful of my studio which was important to me; it wasn’t just a “regular” set, but rather my intimate space. I did make sure to put away all of my wet paintings and fragile charcoal drawings before the wild bird went loose!

What would be your advice to young artists who may encounter these kinds of “vultures” early on in their careers?

I think what the writer of the film did well, in addition to what organically come out during our voice-over sessions, was that as an artist, you are the master of your creation. No one else. As anecdotal as it is, you must stay true to your own, unique vision. People, in any field or context, will try to direct you, influence you, perhaps even steal from and betray you. But also remember that there is a reason for their desperation and vapidness, and by hunting you and your art they are in fact recognising your strength, integrity, and nobility. Also, and very pragmatically, I would recommend seeking professional assistance from an expert who’ll defend your interests to mitigate risks (i.e. lawyer, accountant, agent, financial consultant, etc.). 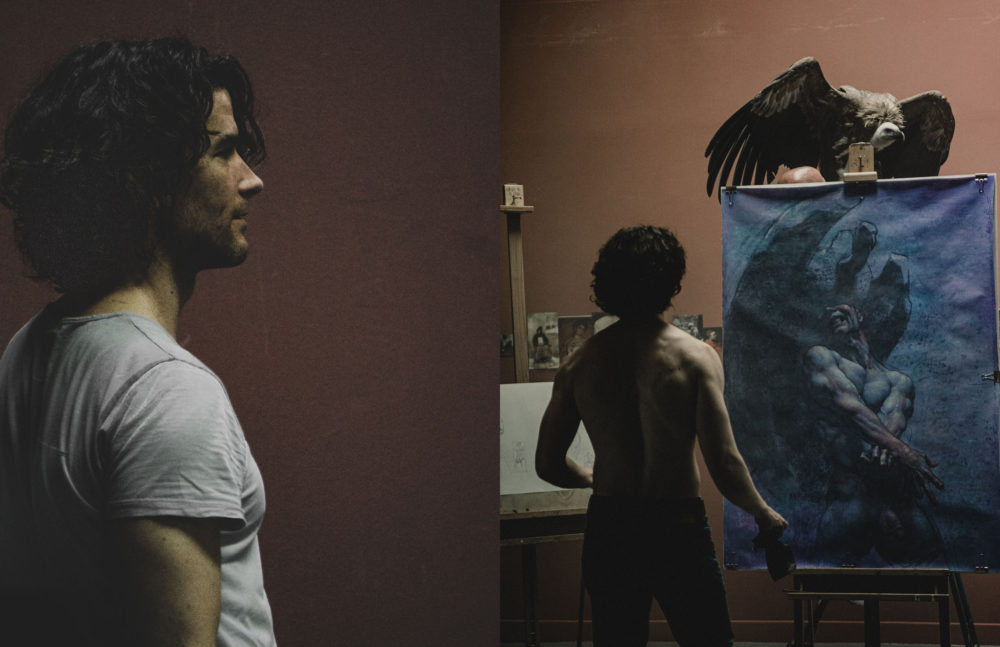 In the film, you say, “I am most vulnerable when I am in front of the work.” What does this mean to you? What role does vulnerability play in your work?

How do you interpret vulnerability? And what do you feel society gets wrong about it?

As a realist painter, I work exclusively from life. I won’t say that vulnerability is at play every single day, but when either the models or myself or both are indeed in that intimate zone, the honesty and preciousness of that space is undeniably palpable. It feeds my work in unpredictable ways. I feel that societies’ lace vulnerability with a negative connotation, whereas I have learned not to see it that way. Vulnerability can take us equally into the light or equally into the dark. It should be embraced and treated delicately, and not shunned. 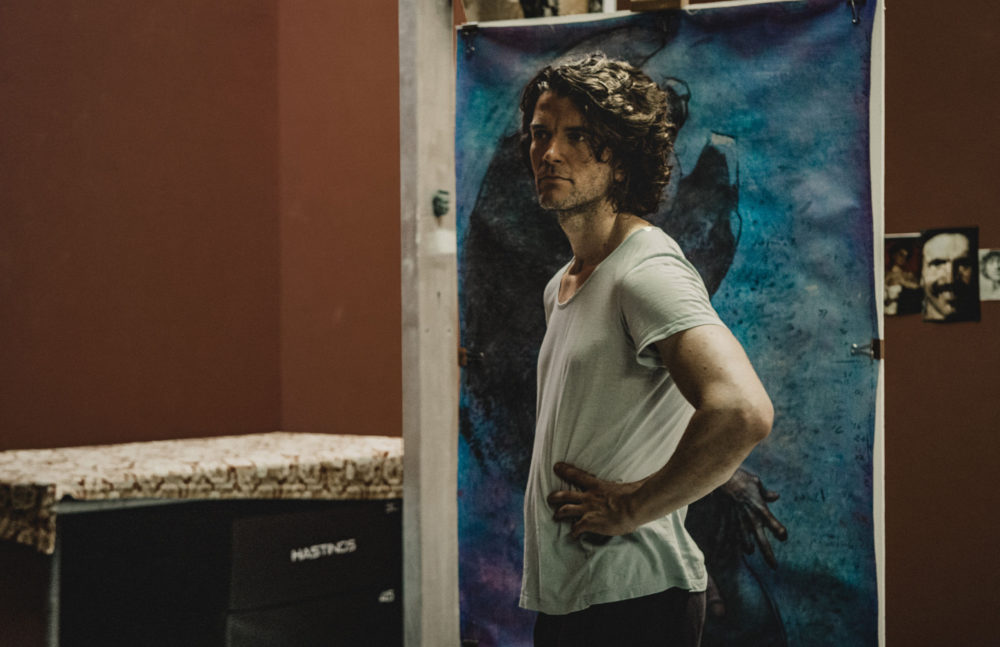 How was the experience of working with an actual vulture on set? Were there any difficulties behind the scenes?

We had a wonderful trainer with us on set, but nonetheless this vulture was still a wild animal. It was actually quite majestic and truly a creature to behold. It was a bit nerve-wracking to have a 10-foot wingspan graze my head while I was supposed to be drawing. The face-to-face shot with the vulture was also a bit hair-raising.

In sketching the vulture on set several times, it was amazing how powerful its transformation was when the wings were folded into the body versus when the massive wingspan was deployed. I told the film crew that I thought that it was a perfect representation of the parasites that the film evoked: we perhaps get acquainted with these people and believe them to be one kind of shape; then in an instant, the wings expand and this giant, unknown beast is actually before us.

You studied in Florence and are now based in Paris. What were the roles of these cities in shaping you as an artist?

Clearly these two cities immensely shaped my entire way of life after having grown up in Cincinnati, Ohio. You can’t spend 4 years of intensive study in Florence without feeling the enthralling grasp and power of the Italian Renaissance. The Renaissance was so humanist in its art and philosophy, and the focus on the human figure and its undeniable strength is present everywhere in that city. I felt however that Florence was a bit stuck in its glorious past, a bit closed to the monumental waves of creative expressions that have since occurred. Paris, in contrast, is a city where all the arts are still booming and overlapping. Its vibrance is palpable and influence directly and indirectly the way I think and work. Florence is where I learned my craft. Paris is where I have learned to become an artist. 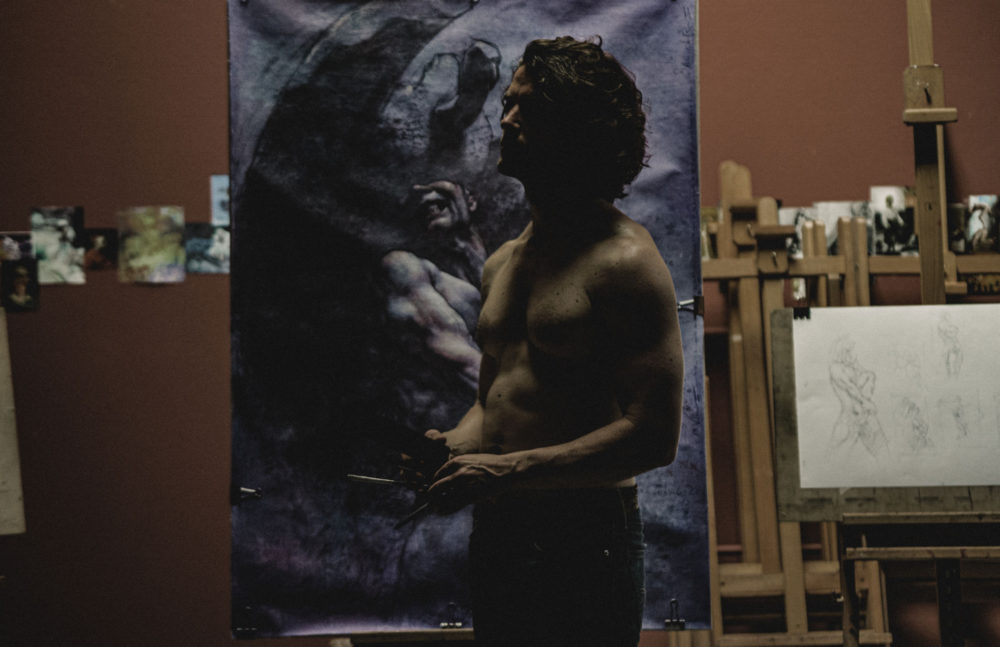 Many creatives are currently struggling with reconciling their creative processes with the financial and psychological repercussions of the pandemic. How has it been for you?

It reminds me of when I first started in my career and I was completely broke. I couldn’t afford models all the time so I grabbed a few large mirrors and began posing for myself. The pandemic has shut down any possibility to work with models for the time being, so I’m back doing what I used to do a lot of: Bending and twisting before the mirrors. Whatever constraints this virus is throwing at us, artists are the best positioned to change limitations into opportunities. Financially speaking, our careers have always been and will always be cyclical. The virus is currently pushing us into a financial lull, but that’s nothing unknown to us. Art lives on!

Is the quarantine hindering or benefitting your creativity?

Both. I have logistical constraints that prevent me from spending my habitual nine hours a day in studio, so that is affecting productivity. However, I’ve been using this time constraint to my advantage and pushing myself on quicker studies than I would normally do (i.e. self-portraits and compositional studies).

What are you most looking forward to once it’s over?

Getting my wonderful models back in studio for more crazy posing, and my Crossfit box reopening! On a more serious note, I am very curious about what voices of art will prove most pertinent, perhaps “universal,” once the pandemic is over. There could be a serious paradigm shift like there was in the early 20th century during and after the gruesome world wars. The entire globe is currently under an unprecedented lockdown; our habits have been forced to change; mindsets are certainly going to evolve. And artists have always had the most eloquent voice to speak about our place in history.