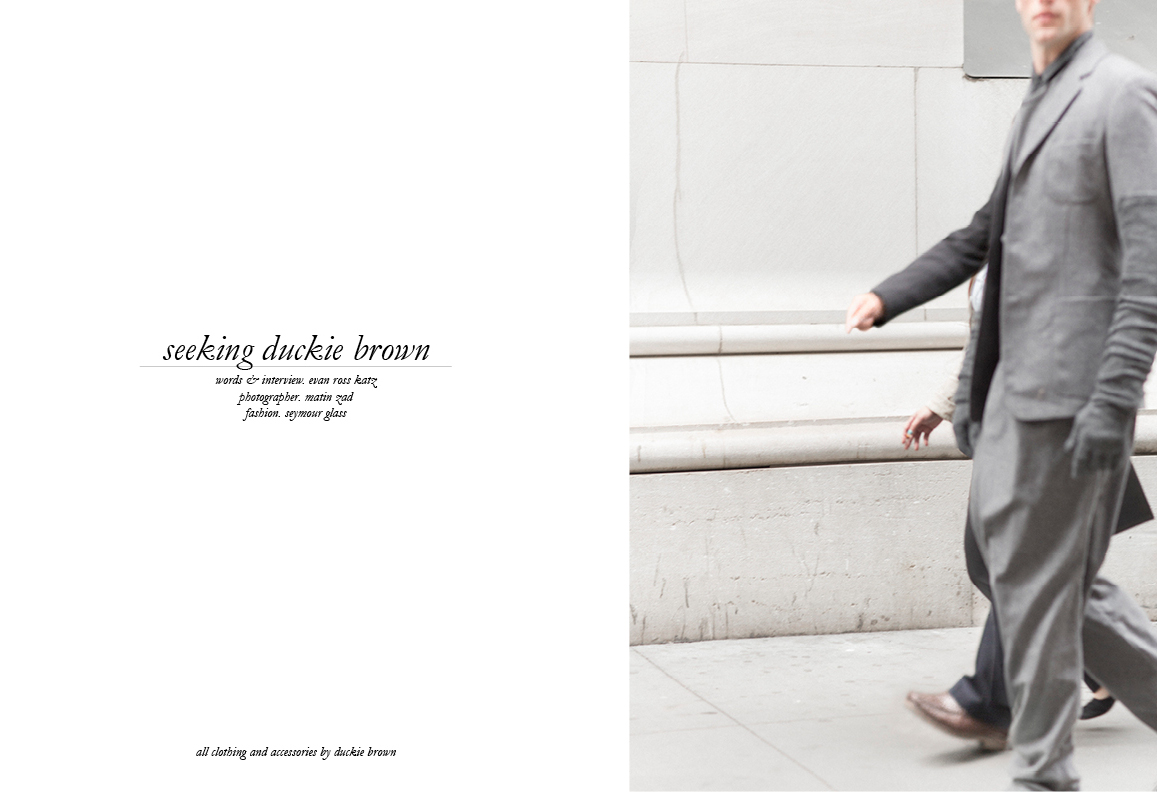 Hard to believe it’s already been twelve years since Steven Cox and Daniel Silver shepherded their very first collection down the runway in 2001, giving the world its first jolt of Duckie Brown’s pinks, greens, and sequined briefs with built-in gloves and fake urine stains. Nothing about Duckie Brown is not eccentric or quirky, and so why then should its founders be anything other?

Cox and Silver, a real-life couple, first met twenty-one years ago in Fire Island. It takes but seconds to witness this is a special love; for each other, for the clothing they together create. After mega-successful collaborations with distinguished brands like Perry Ellis and Florsheim, the brand they together created is shaking things up once again, and this time, the ladies are invited along.

Schön! sat down with the charismatic duo to talk fashion, Wednesday night couples counselling, Miley, most stylish cities, and figuring out what a Duckie Brown truly is.

Let’s start off with an easy one, where did the name Duckie Brown come from?

Daniel: Duckie is an endearment that we’ve always called each other, and when it came to naming the collection, we just thought, ‘Duckie, what do you want to call the collection?’ And of course it was going to be Duckie. Then we added Brown because we thought it anchored the name and made it seem a little more usual because Duckie is so unusual.

Steven: There is some very, very untraditional stuff about Duckie Brown which is the Duckie side and also a very, very traditional side that is based in traditional menswear tailoring, and that’s really the Brown side. 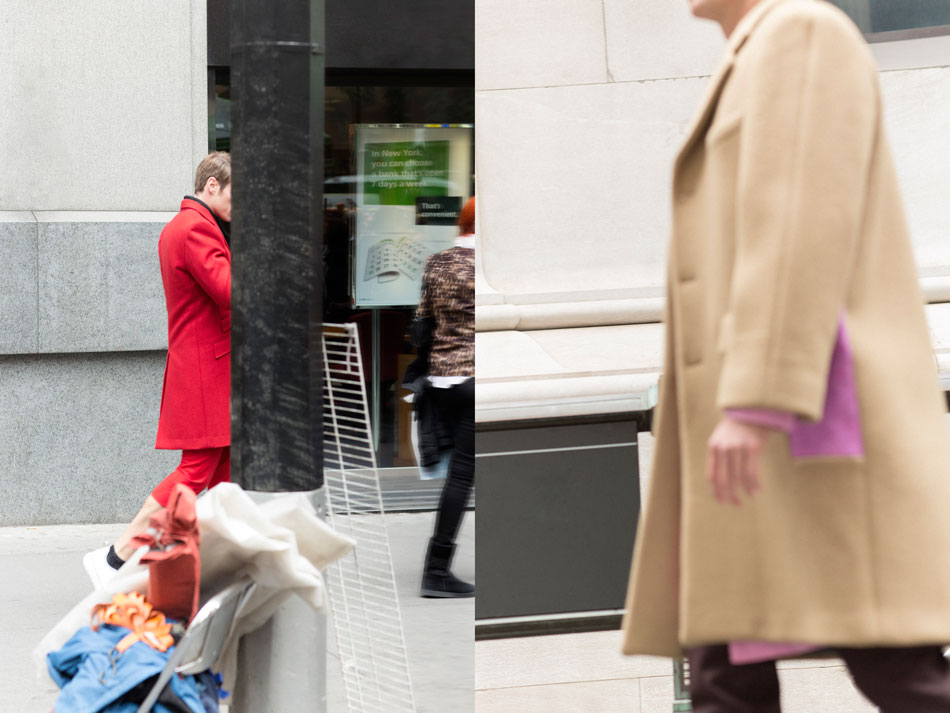 What’s it like working with your partner on a day-to-day basis?

Daniel: It’s horrible and wonderful and great and frustrating. All of the above. It’s great when it’s great and it’s not when it’s not.

Steven: We go to couples therapy every Wednesday at 6PM and that’s perfect; that’s what we need. If anything happens within work and we’re arguing we’ll kind-of look at each other — we don’t have a code word — but it’s a look where we decide to shelve that and discuss it at therapy. It’s like any couple: there are incredibly good days and there are incredibly bad days, but I think the highs outweigh the lows, and we generally get on really well. And we’re a good team.

I read that you use the last Italian hand-tailored jacket factory in the U.S. — Why is this important to you both?

Steven: There’s a very, very tailored feeling in our collections and I wanted that to be. We always start with what the shoulder’s going to be, what the silhouette of the coat’s going to be. We wanted that workmanship and that craftsmanship that a lot of factory’s don’t do, particularly men’s because men’s is a dying business unfortunately. And that kind of tailored thing is very difficult to get a hold of, particularly in America. It’s much more Italian or much more English. And we wanted it to be in America because we wanted to control it and we didn’t, or we don’t, have the money to keep going backwards and forwards to England or to Italy. And Long Island City and Greenpointe are the closest we could find. 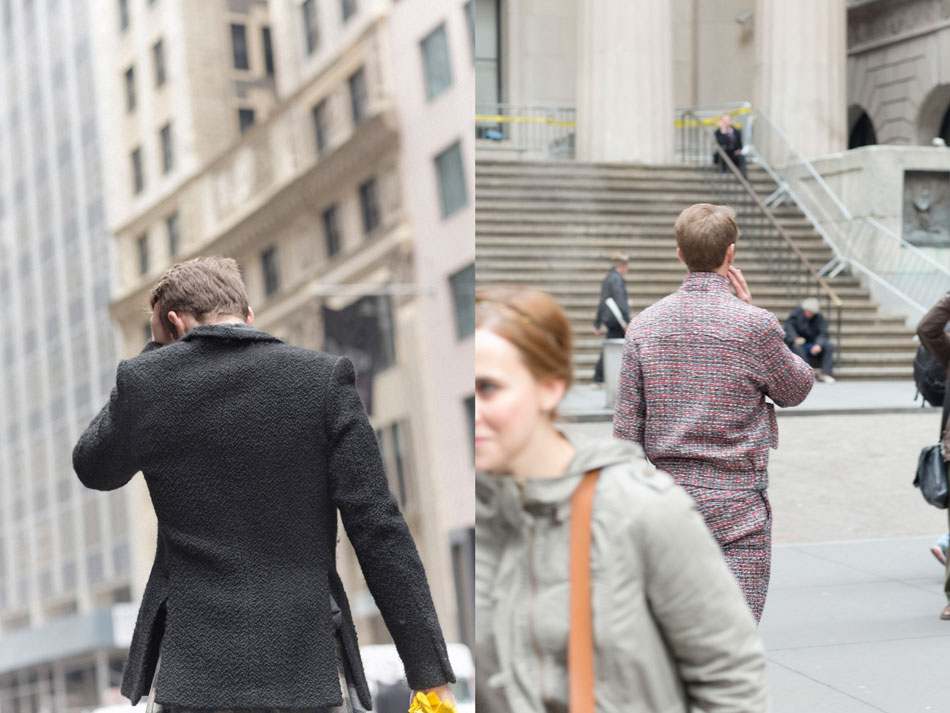 Has the Duckie Brown aesthetic changed at all in the twelve years of existence?

Daniel: I don’t think the aesthetic has changed, I think maybe it’s matured. And I think what we do is growing in terms of the silhouette and the shapes that we are doing. But I think the essence has always been the same because it’s always been us, and that remains a constant from the first collection we ever did to the collection we’re doing now for Fall ‘14.

Steven: I think when you first start a collection you don’t know what it is and you have doubts and insecurities about what you’re doing and when we started it — I was 34 — I was not as confident as I am now — now I’m 46. I think the collection reflects that. We work with a stylist now who edits us and I think I’ve become a better stylist as a designer. I’m not a stylist, though, I’m a designer. I think it’s become much more, slick is not the right word, focused, we’ve become more focused.

Daniel: But do you think our aesthetic has changed since day one?

Steven: When I look back at our first collections I see that…

Daniel: I don’t think it has. I mean look at us, we still have the kind of fabrications that we love from the very first collection.

Steven: Yeah, it’s just that we’ve gotten wiser. I would say the aesthetic has changed for the better.

Daniel: Maybe the answer is that the aesthetic has grown and matured.

Glad we resolved that. Now, what do you make of the intersection between fashion and social media?

Daniel: Social media just gets the message out there even more. People are either chatting or looking at images, which is really what a fashion show is all about. We have a Tumblr and an Instagram and Facebook and all that stuff, and it’s great to be able to interact with people and to let people in and see what we do on a day-to-day basis. I think it’s all great. And I think it’s kind of sad as well. There’s so much coming at people, so quickly, a glutton of information, that it’s become hard for people to make their way through it all.

Steven: When I moved to NY in ‘91 I didn’t have a laptop, I didn’t have an iPad, I didn’t have a cell phone. When I was in school we didn’t use the computer, so I kind of feel like a Grandaddy sometimes because I don’t have a natural talent for all of what you do on Instagram and Tumblr. I struggled with that for many years because I don’t really use the computer. I use a pencil. I do a sketch. That comes naturally to me because that’s what I learned in school. Sometimes I wish I was a little younger and used these things in a better way. But we use people that are good at what they’re good at, so we have a younger person doing our Instagram and our Tumblr because we can’t do it. We don’t know how to.

Who’s the best dressed celebrity of the moment?

Daniel: The best dressed celebrity of the moment, Oh God.

Steven: The first person that comes to mind for me is Miley Cyrus.

Daniel: Me too, Ducky.

Steven: I don’t necessarily like all of that Wrecking Ball video, but the actual image of it is kind-of beautiful, having her naked on that ball with just her Dr Martens on. Which for me is an incredible inspiration for Duckie Brown. The Dr Martens are something that I went to school with, that I wear a lot, and there’s a memory there. Men’s wise, I don’t know about men’s, but Miley Cyrus: She’s stylish, she’s like a style icon, but I mean she’s got nothing on in that video, so… I don’t know. There’s something about her that I like. 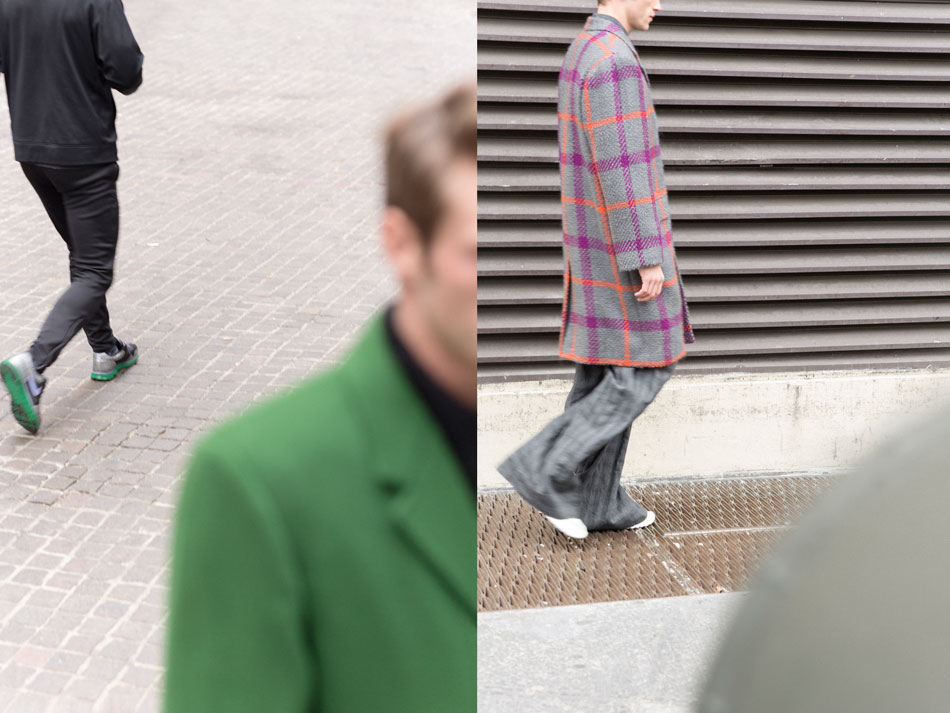 What city has the best style?

Daniel: I would say Tokyo.

Steven: I like the way London boys dress, but that’s because I’m English.

Steven: There’s stylish and beautiful people in most big cities. But Tokyo was amazing, everything about it, the stores, the architecture, the food, the people. It had an incredible energy similar to New York and London. Those are the three that come to mind.

There are rumours floating that you’re currently working on a woman’s line, can you confirm that and if yes, can you give us any details?

Daniel: We can confirm it. We are going to show women’s alongside men’s in our fall ‘14 show which is happening on February 6th. It’s for a woman, not for a girl. It’s very luxurious. It’s sexy. It’s for a downtown, hip woman.

This is a toughie, but when asked about a favourite collection from your catalogue, does one instantly come to mind?

Steven: If you’re talking about photographic images of Duckie Brown, there is an image of a guy that’s in the shape of an elephant with a brown cashmere suit on with a huge oversized sweater over it, and he’s in such an odd shape, and that for me is the strongest image of the moment. I think the underwear with gloves that we did is a quintessential part of Duckie Brown.

Daniel: The floral pieces at the end of that Summer collection, when we did all those floral track suits. For me, every collection, I’m always surprised. At some point we get all the samples in and I’m like ‘This is really good’ and I have that moment with every single collection. So, whatever collection we’re working on is always my favourite at the moment.

Daniel: None really. I suppose I go to A.P.C sometimes. We shop all over the world. I don’t really like to shop, so I wear a lot of Duckie Brown, because I like it, it’s easy, and it’s here.

Daniel: My resolution is the same as always: I don’t make any. I try to do one day at a time.