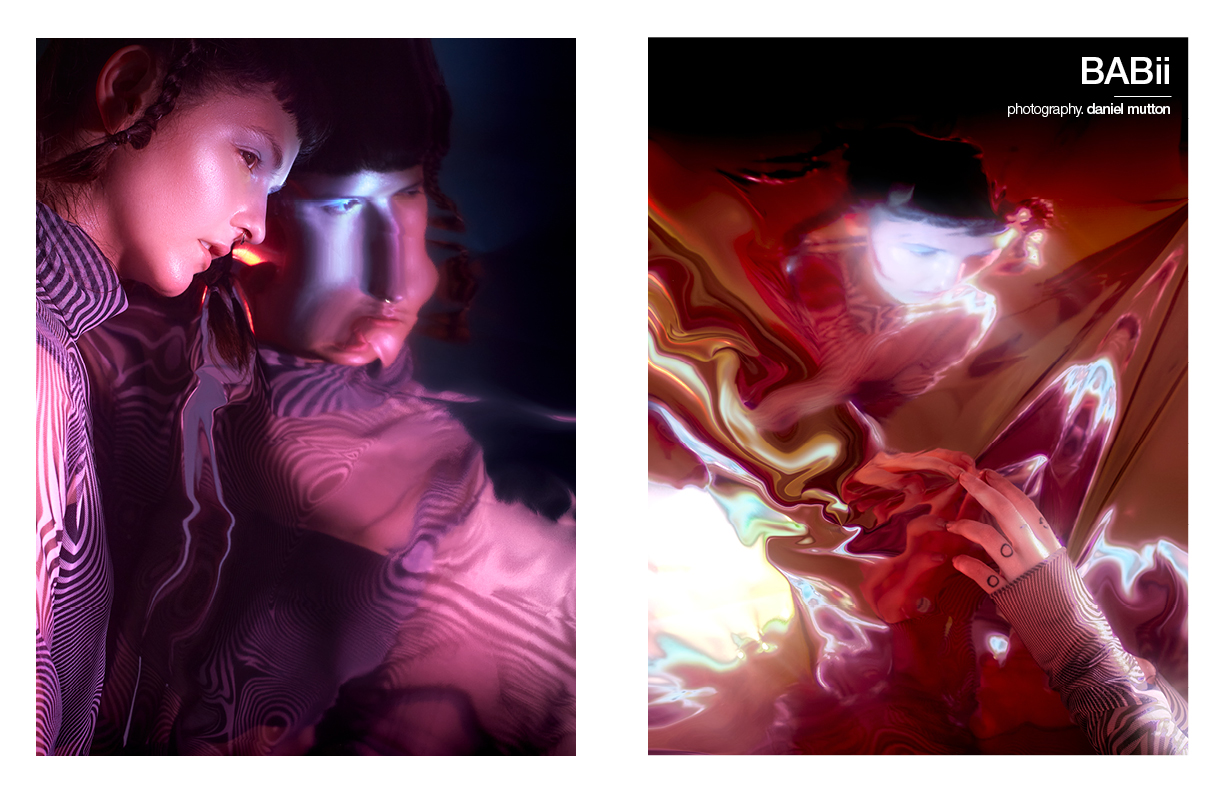 British artist BABii exists in a universe of her own. There isn’t anyone making music with quite as much depth and experimental production quality as her. Raised between Kent and Canada, BABii’s sound is undefinable but leaves a lasting mark after the first listen. Her music serves as a therapeutic safe haven to heal from past trauma. It’s a theme she explores in her music video for new single DRiiFT, premiered exclusively on Schön! Directed by Dogbrain Videos, BABii and John Goddard, it reflects a childhood memory when BABii witnessed her father get into a heated brawl. “I am just capturing the essence of atmosphere and reimagining it rather than recreating it,” she says about the track. Most of BABii’s songs serve as a tech-infused veil for her to ruminate in dark emotions. Her lyrics are intentional and deeply personal but to a listener they sound like encrypted poetry.

BABii’s brand new album MiiRROR is a good introduction to her style. It explores “being able to see yourself beyond your own demons and the companionship and dialogue between good and evil.” In the process of its creation, BABii learned the power in vulnerability. “I know that when I am a witness to vulnerability, it makes me feel comfortable with my own,” she says. “If putting myself in that position makes people feel like that [then] there is no bigger reward for doing something so scary. It’s all worth it in the end.” Her visceral album is a transportive glance into BABii’s emotional battleground. In an interview with Schön!, the talented artist reveals how her latest album became a source of solace and, ultimately, a reflection of the self.

After listening to your album, it’s so sonically diverse. What kind of music did you grow up on that still influences you today?

I draw from a lot of different places. It’s often places that aren’t even music such as films, pictures, fragments of conversations and imaginary scenes that I conjure in my head. Musically, there are definitely some landmarks that have been eye opening for me. When I first heard Rustie with that Pikachu song, it was like nothing I had ever heard before. It was so HD and shiny and sounded like pure laptop music. The same with hearing Arca for the first time with &&&&&. It totally changing the way I looked at production. Alopecia by Why? was another one but that was more about Yoni Wolf‘s approach to lyrics. The same with Joanna Newsom‘s lyrics but it was more about her unusual and wild voice and how it made me feel comfortable about my own.

Another big influence was the live bands that would come through my home town when I was a teenager. I saw some of the most incredible low-key pieces of experience design at those shows. Bands would go above and beyond to make their shows extra special with costumes, interactive elements, props, and they would often be playing to an audience of 10 people but still have the energy as if they were playing to 1000. That time in my life has left the biggest impression on me. I am always trying to harness that same energy that I witnessed as a kid so I can pass it on to the next person.

Do you think coming from different places means you have a broader range of sounds to pull from?

Being from a somewhat nomadic background, as well as a chaotic one, has blessed me with a lot of emotional references that are often connected to a location so there are a lot of auras of time and place to pull from. The most obvious use of this would be in my song DRiiFT which is referencing a war that happened between my dad and a bunch of joyriders that were causing trouble on the road we lived on when I was about 3 [or] 4. It started with an argument where my dad smashed a windscreen or something and it ended in them pulling down a wall with their mates and throwing them at our house and car. That’s reflected in the song sonically.

How do you believe your sound on your new project has evolved since your first album?

HiiDE was the first time I had written, produced and mixed everything myself. With MiiRROR I felt a lot more confident in my production. I still love my first album, and I think my naivety resulted in some interesting things, but I can’t help but feel like sometimes my shyness shines through but maybe that’s cute.

I always find it intriguing looking back on my old songs. They are like tiny time capsules of my internal world from different moments in my life because I am very much a cathartic songwriter. When I look back on HiiDE, it’s easy to listen to the words about this troublesome relationship that I was in and think that it was just some surface-level drama about a breakup. After looking a bit deeper into myself while writing MiiRROR, I realised I have been writing about the same issues forever. I just couldn’t see it before. A lot of the songs on MiiRROR [were] about my struggles with the maternal figures in my life after having a difficult confrontation with my biological mum for the first time in a long while. After getting over the initial shock, it opened my eyes to the heart of all these failed relationships, friendships and my contorted gut instinct which always got me in trouble and resulted in pain that would transform into songs. I approached this album from a more emotionally conscious place.

What’s the significance behind the album title MiiRROR?

It usually takes me ages to decide on the name of an album but I knew what it [was] gonna be almost instantly with this one. The album started off as a very ‘on the nose’ representation of the word mirror. I was going to have two sides of the album being reflections of each other with one song in the middle that was the MiiRROR itself. It was way too big of a limitation. I steered away from that pretty quickly. Although, the word MiiRROR still holds a massive amount of sentiment in relation to this album. It’s all about reflections, being able to see yourself beyond your own demons, and the companionship and dialogue between good and evil. It’s actually pretty telling that this album started out as two parts that then became intertwined. It has truly been a journey of seeing the angels in my demons, and the demons in my angels, and finally seeing myself.

Is there a particular track that feels the most sentimental to you?

It’s so hard to choose just one but if I did have to choose it would be VOiiD because it captures this moment in time which was a combination of absolute euphoria, potential impending doom and confusion. Most of the words likely seem meaningless if you listen to them but it was a secret code that I wrote to someone that only they could understand. Despite the conflicting feelings, it comes from a very different place than most of my songs. It is a reminder of happiness which is an important exercise in balance when I am feeling blue.

How do you get comfortable being vulnerable in your music knowing others are going to hear it?

Usually, covering all my songs in metaphors helps because then I have something to hide behind. The lyrics just become flowery poems and people can make their own minds up about what they mean. There is one track on this album where I decided not to decorate it with any metaphors and I am absolutely terrified about it. I am slowly realising that being super open and honest, as scary as it is, is actually a gift rather than a hindrance to people.

What made you decide to release a book, an alternate reality game and an audiovisual show alongside your album?

I have just always wanted to make a book and seized the opportunity. It was a way I could expand on the album’s themes by including a story that holds the same sentiment as the music. The story is a symbolic retelling of my feeling towards not having a stable maternal figure in my life which also captures memories from my childhood with scrapyards, demons, angels, dragons, diesel and opal.

As for the alternate reality game (ARG) and the audiovisual (AV,)  I always love doing things that challenge me beyond what I have done before. This seemed like a natural next step. I am actually doing two different AV shows now, too. One for my album launch show and the other for my UK tour which is going to involve smoke, mirrors and laser dragons. I am so excited to bring people deeper into my world with the final pieces to the MiiRROR puzzle.

You’re set to go on a UK tour so will actually get to perform your work for an audience. How does that feel after a year-long hiatus from live performance?

Pretty exciting even though I am currently feeling unprepared. I love the idea of programming and building a new live show from the ground up after not playing for a long time. The idea feels quite cleansing. I’m also just really excited about the simple things such as rehearsing for something again, the downtime of travelling to shows, the atmosphere of a venue before it’s open, getting a bit scared before a show and making mistakes in front of loads of people. 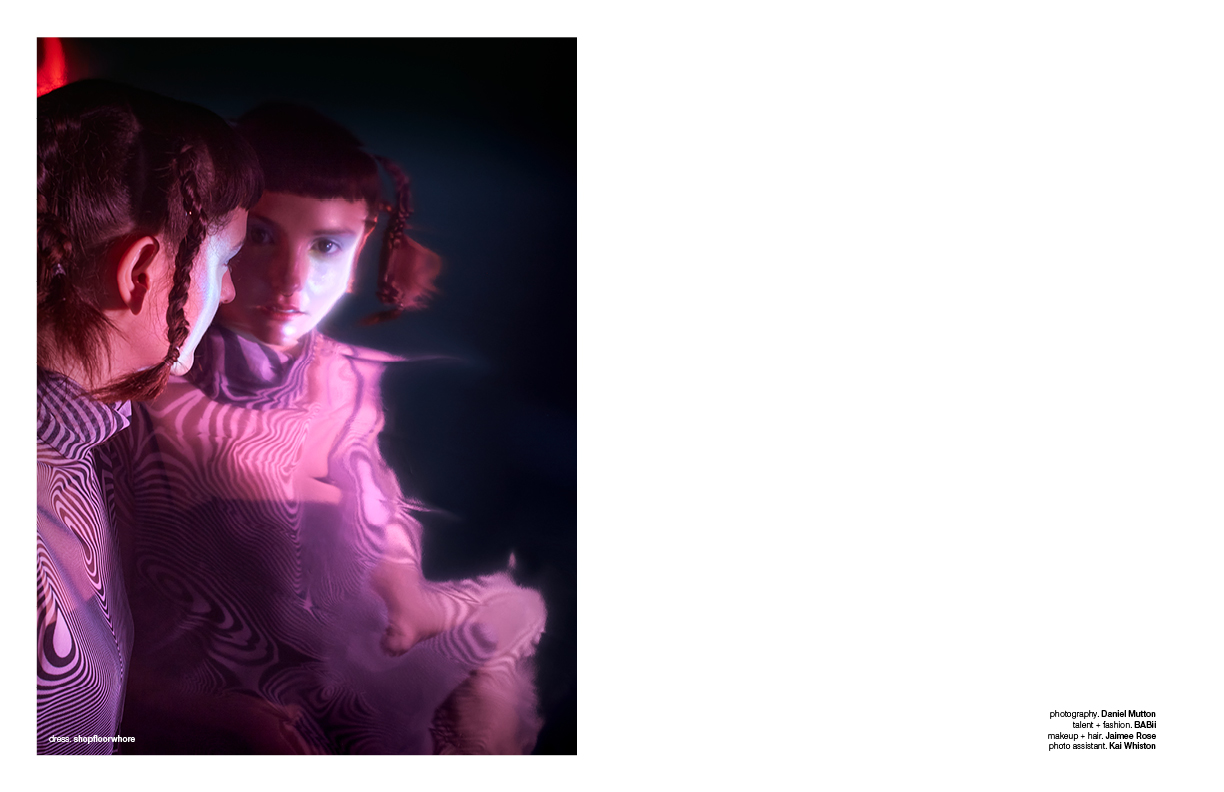