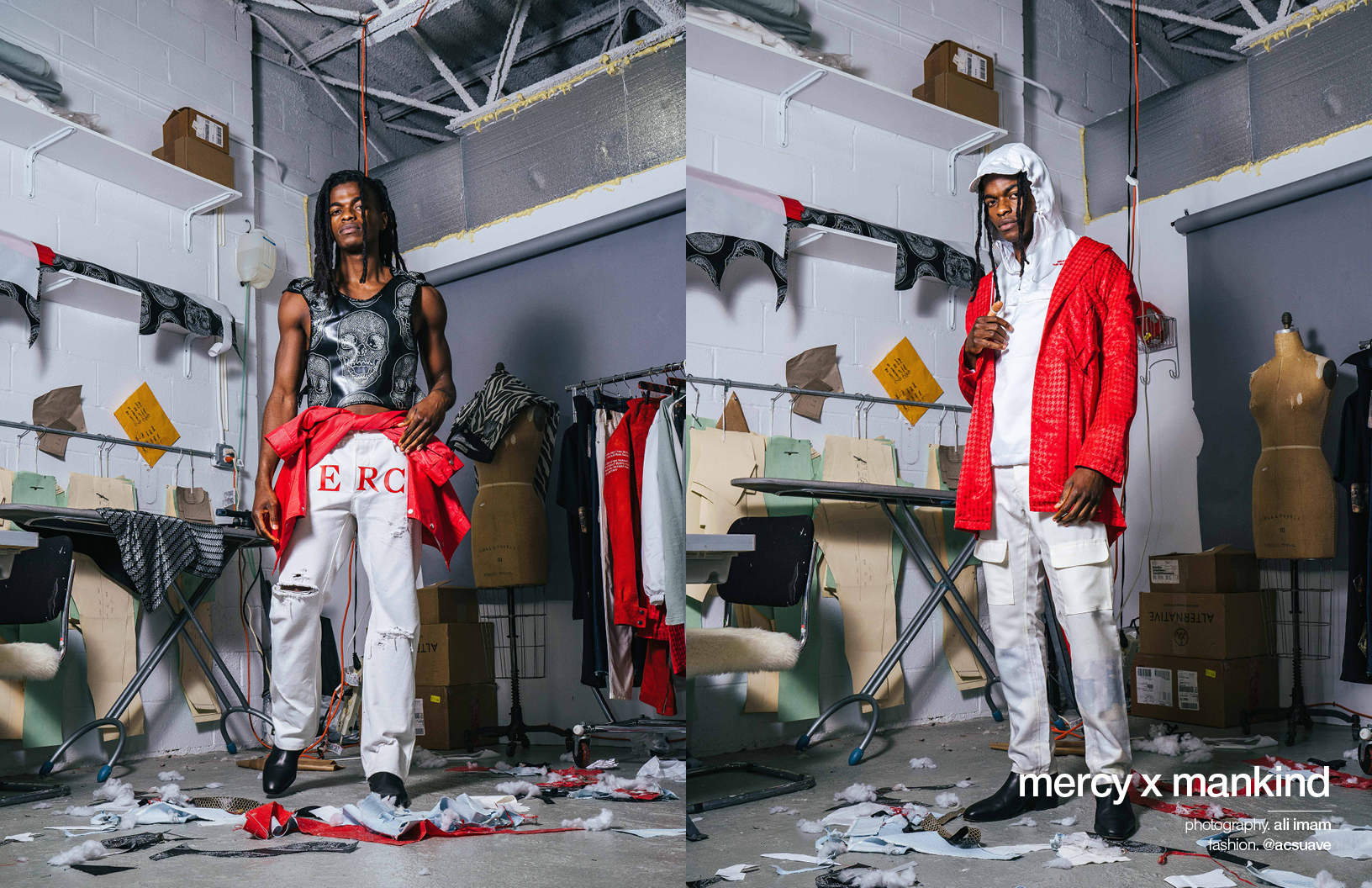 Mercy X Mankind, founded by Pakistani-American designer Isaac Saqib,  creates emotion-rich works imbued with a potent sense of time and place. With every piece produced in Brooklyn — barring the leather work, which is artisanally sourced from his mother country of Pakistan — MXM is a modern label with a series of dynamic and exciting collections to its name. Schön! spoke to Saqib about the label and his history with design.

You began making clothes at 20 with no formal training. How did you get your start in the industry?

It began with me venturing into the Garment District in Midtown Manhattan, simply riding the elevators up to random floors in high-rise buildings, knocking on doors of random factories and asking them to make me a T-shirt.

Many of them were producing for the likes of Calvin Klein and Tommy Hilfiger and looked at me with a touch of condescension, but I persisted until I found a few master garment constructors and pattern makers who took me under their wing where I was trained through meticulous observation, thus expanding my knowledge of design.

You’re a Pakistani-American who grew up in NYC. How do you see that history reflected in your work?

I grew up as the minority in a minority neighbourhood where there was not much of a sense of belonging. In this environment one usually becomes a doctor, lawyer or engineer — because that’s how most of our parents made it to America. Sports, fashion, music — all of these outlets that connect to American culture — are disconnected from your reality from the beginning.

Funny enough though, I think the lack of relating to those cultural norms drove me to crave and dream about it as it seemed so far removed and inaccessible. I was constantly looking for new music, watching basketball games, and I used fashion as a way to relate to people.

I formed my own unique identity as a Pakistani-American by melding together the cultures that I was brought up in. I think that this unification of different styles/aesthetics is evident in my work. It often results in standout pieces that I don’t think people are used to seeing. Finding a balance between tacky versus revolutionary and tasteful is a challenge. 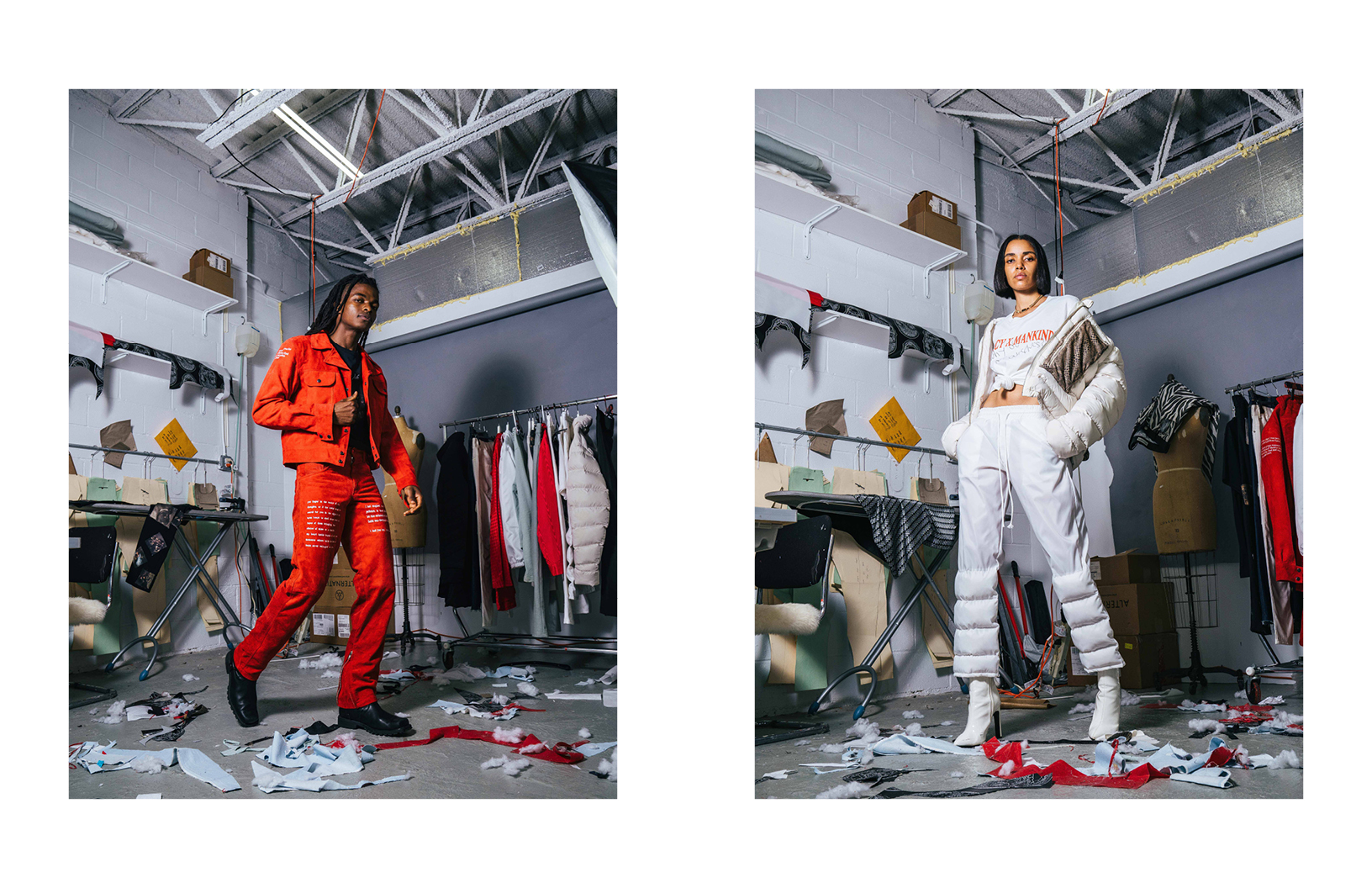 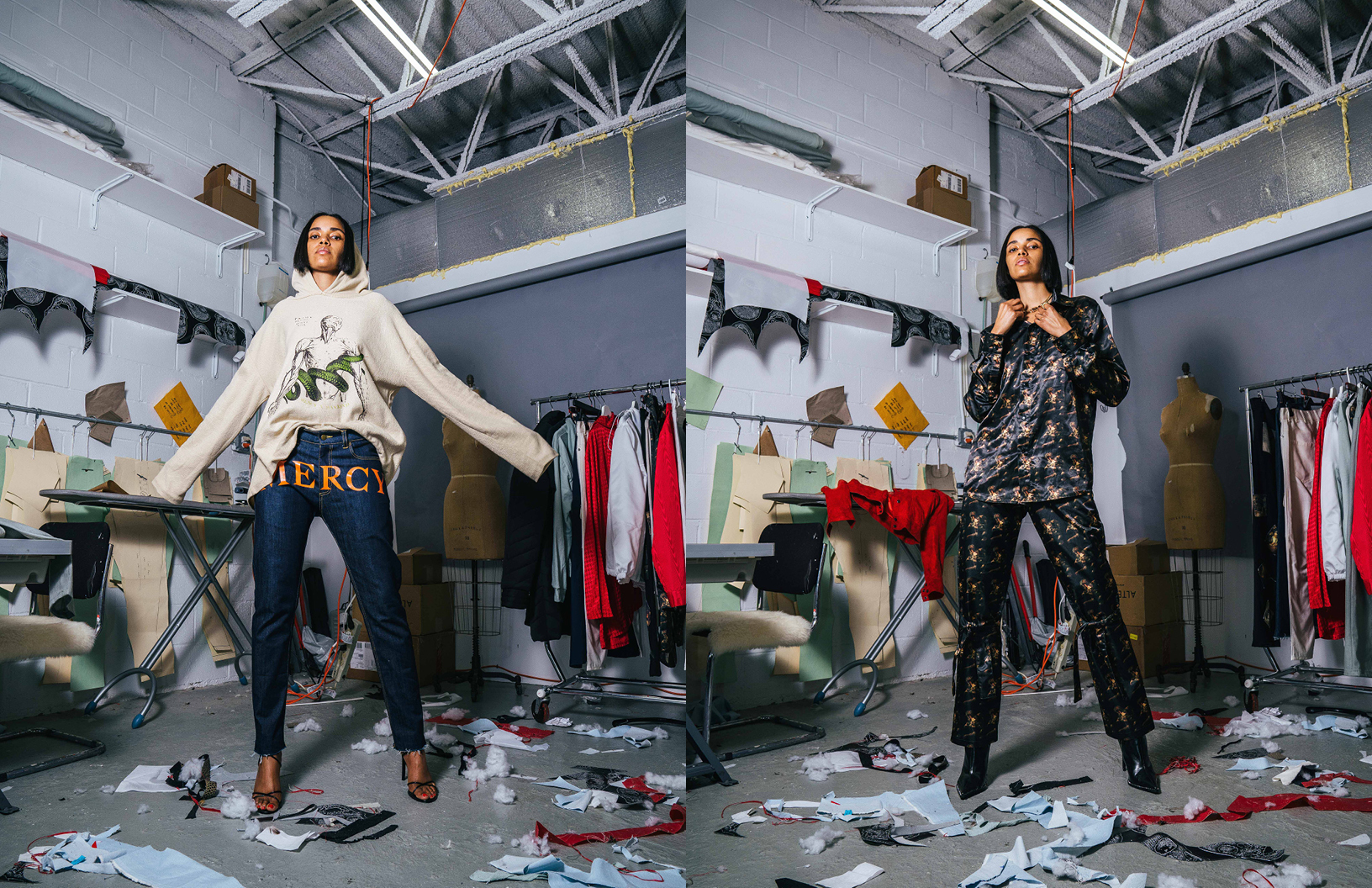 Introduce us to this collection. What inspired this series of works?

Goya developed an embittered attitude to mankind towards the end of his life. He went into isolation which led to panic, terror and fear, which is reflected in his works of dark and disturbing themes: The Black Paintings. These portrayals of intense, haunting themes are reflective of both his fears and his bleak outlook on the mercy of humanity. Goya never meant for his black paintings to leave his home; it is likely that the artist never intended the works to be seen.

MXM’s Fall/Winter 2020 collection reflects on this peril: the effects of isolation on the creation of dark thoughts. What if Goya had not self-isolated? If he had trusted in a merciful audience to exorcise his fears?

Through this collection, I wanted to transmute my fears, to wear my demons and display them in front of a merciful audience. Unlike Goya, I exhibit the Black Paintings. A pair of pants becomes a gallery — the series is printed and paraded for all to see. Silk garments are a canvas for “Saturn devouring his son”. Poems are embroidered for all to read. Such a display enables relief from the controlling power of fear and gives the power to heal; it asserts the power of understanding of others through Mercy. 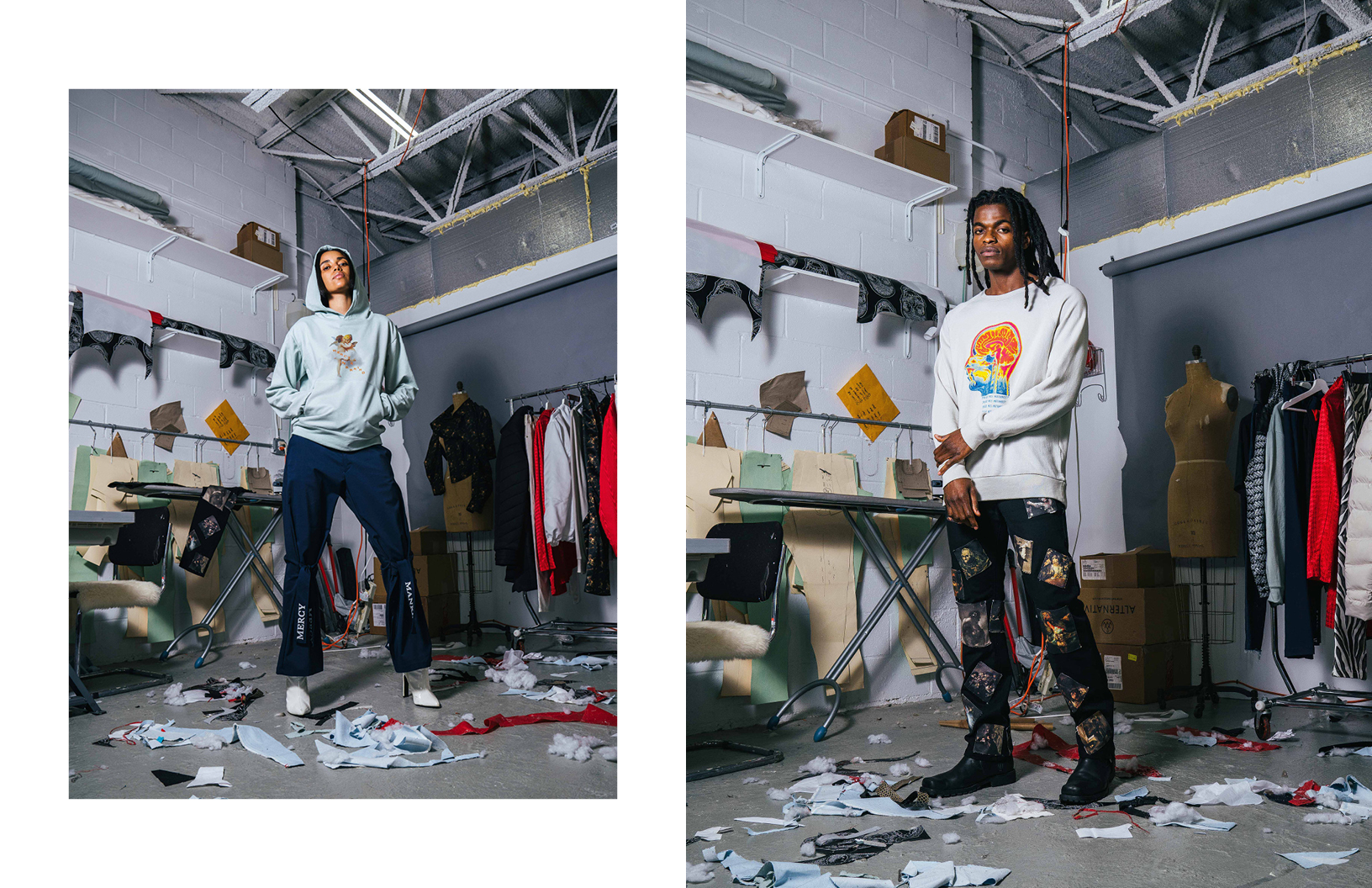 How did you first become aware of the “Black Paintings”, and what did you connect with about them?

I was familiar with the works, but I didn’t explore them fully until I came across one painting in particular, “Saturn Devouring His Son”. I was sitting down in an isolated corner of my local library going through art books and I remember coming across that painting, and it terrified me. I remember thinking about what state of mind a person had to be in to paint something like this. After reading that Goya had painted this on the walls of his townhouse while being a recluse from society, I was hooked.

The aloneness we all felt this year connected me to this work. And made me realise the importance of empathy and a strong support system.

Some of these pieces feature embroidered poetry. Is this original? What can you tell us about the featured poetry?

The poetry is originally done by Pakistani-American poet Hassan J. Syed. I tapped Hassan when I was thinking about the emotional toll of heartbreak and how we could convey those feelings through a story of the loss of love. Hassan sent me a few options and eventually we decided on one that fully embodied that idea. What resulted was a poem on a bright red cherry suede leather that extends sleeve-to-sleeve on a jacket and leg-to-leg on a pair of trousers. I also wanted to include a fellow Pakistani artist in the creation of this set to further push a message of unity and love for my own people.

Your collection is made in Brooklyn with leather work in Pakistan. Why is this production process vital to MXM?

Both Brooklyn and Pakistan hold strong roots at my core. I was born and raised in Canarsie, Brooklyn, and as a teenager my parents were able to move us to Long Island to a safer environment. The contrast of a small, two-bedroom apartment for five people to a three-story house surrounded by a white picket fence in the suburbs was life-changing. But it was also apparent that our newfound suburban neighbourhood lacked a sense of authenticity and genuineness. Everyone, from the neighbours to the kids in school, seemed to come from a more privileged background, one that lacked the sense of community that struggle creates.

I think it’s because of the years I spent searching for authenticity in people and life through my teens that I eventually returned to open a studio in Brooklyn, where we now develop and produce almost all of our garments/accessories. Producing out of New York in general has always been very important to me as I started off designing only through feeling fabrics and materials by hand, rather than sketching and curating graphically — I’ve found I work better when I can make that intimate connection with the clothes we produce.

Even though I never lived in Pakistan, I’ve found that the older I get, the more I want to connect with my roots there. On trips to the villages where my parents were raised, I feel a sense of belonging, community and love from the people there. I also think that Pakistan has some of the hardest working people in the world and the history behind a country that was built for a single purpose of unity, surviving against all odds, is extremely inspirational and speaks to my whole existence.

Out of love for my ancestral roots and appreciation of my parents, I wanted to somehow make sure I incorporated a process of production there. The leather industry in Pakistan is mostly known for sporting goods and cheap garments, but I wanted to utilise those resources to create luxury, quality leatherwear that could rival leathers made elsewhere like Italy or Korea. As time progresses, I aim on involving myself more heavily in aspects of improving the overall living conditions of the people of Pakistan, not just in fashion. 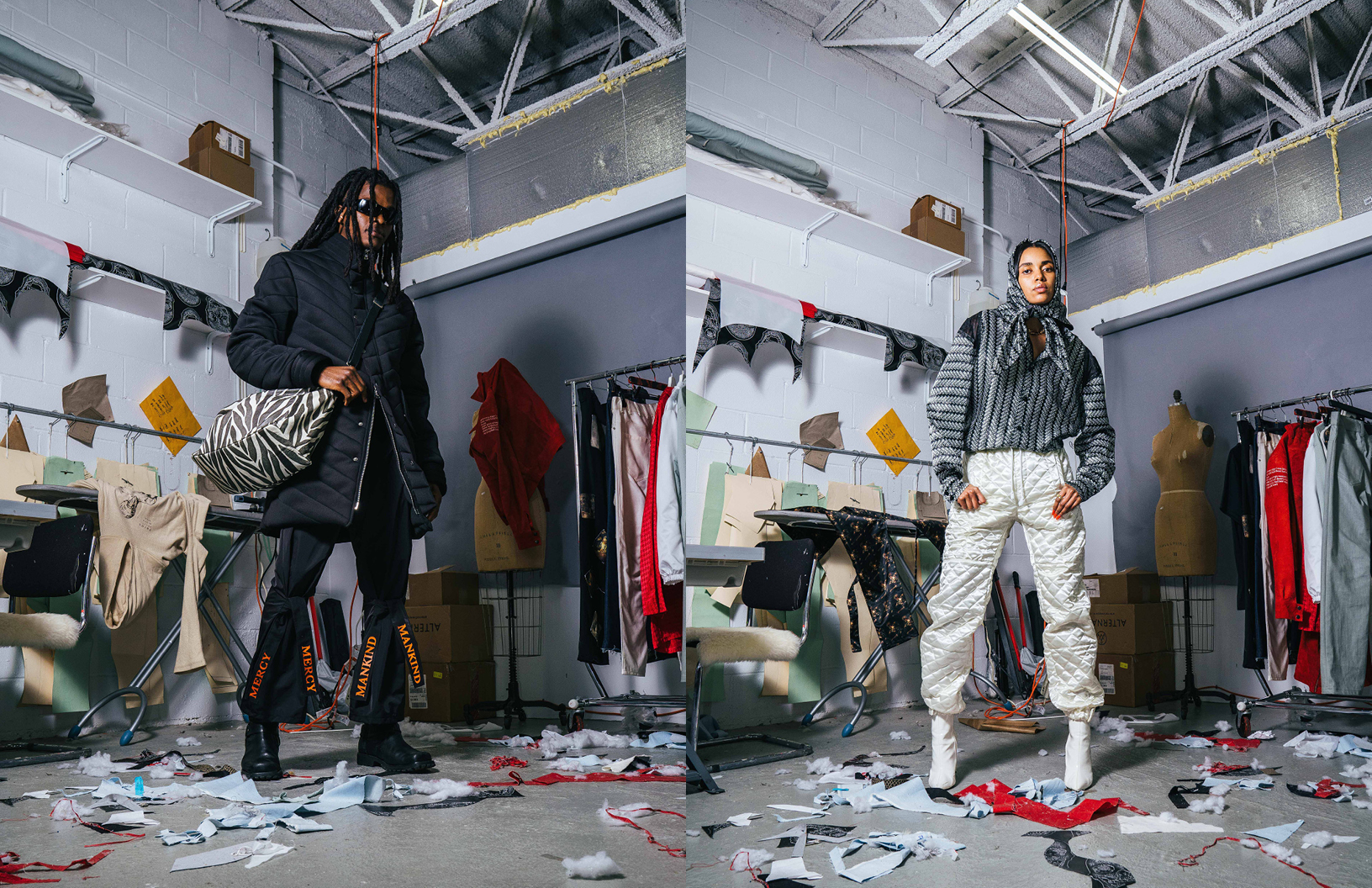 Why did you opt to shoot this collection in your atelier?

The decision to shoot this collection’s lookbook in our very own studio was a realisation that the brand’s identity has always been one of authenticity and transparency. I think this collection in particular was very transparent in its message — it didn’t shy away from exposing those deep dark feelings that we as humans go through. In fact, it looked to expose works the artist originally intended to be kept out of the public eye. It is for this reason that I shot the models against the raw, natural background of the studio with scraps of fabric that were just cut on a table nearby lying on the floor, patterns hanging in the back and utilising the studio’s regular lighting. It made for a genuine feel.

You were featured in Netflix’s Next In Fashion. What do you think you learned from that experience?

There were a few things I learned from that experience, but I think one of the most important, however obtuse, was the production and effort behind setting a Hollywood style show. It was eye-opening. The level of organisation and teamwork required day-in and day-out from the main production crew really made me think about why I should surround myself with a team that understands the mission of the brand.

Another thing I took away from that experience was the realisation that even though I don’t come from a technically trained background like all/most of the designers on the show, my love for fashion and technical abilities were not that far from anyone else. As a designer without that formal training there is sometimes doubt in your mind that you’re doing something right and, to be surrounded by people who had been through years of training and to learn and hear about their experiences, was thought-provoking.

What do you see for the future of Mercy X Mankind?

I want Mercy X Mankind to become a hub and symbol of unity. It’s never just been about the clothes for me. My mission has always been to create a place to converse on the unity of mankind through beliefs, struggle, love and empathy. To create pieces that speak to those very notions is a privilege, and even more humbling that people can enjoy and appreciate it. 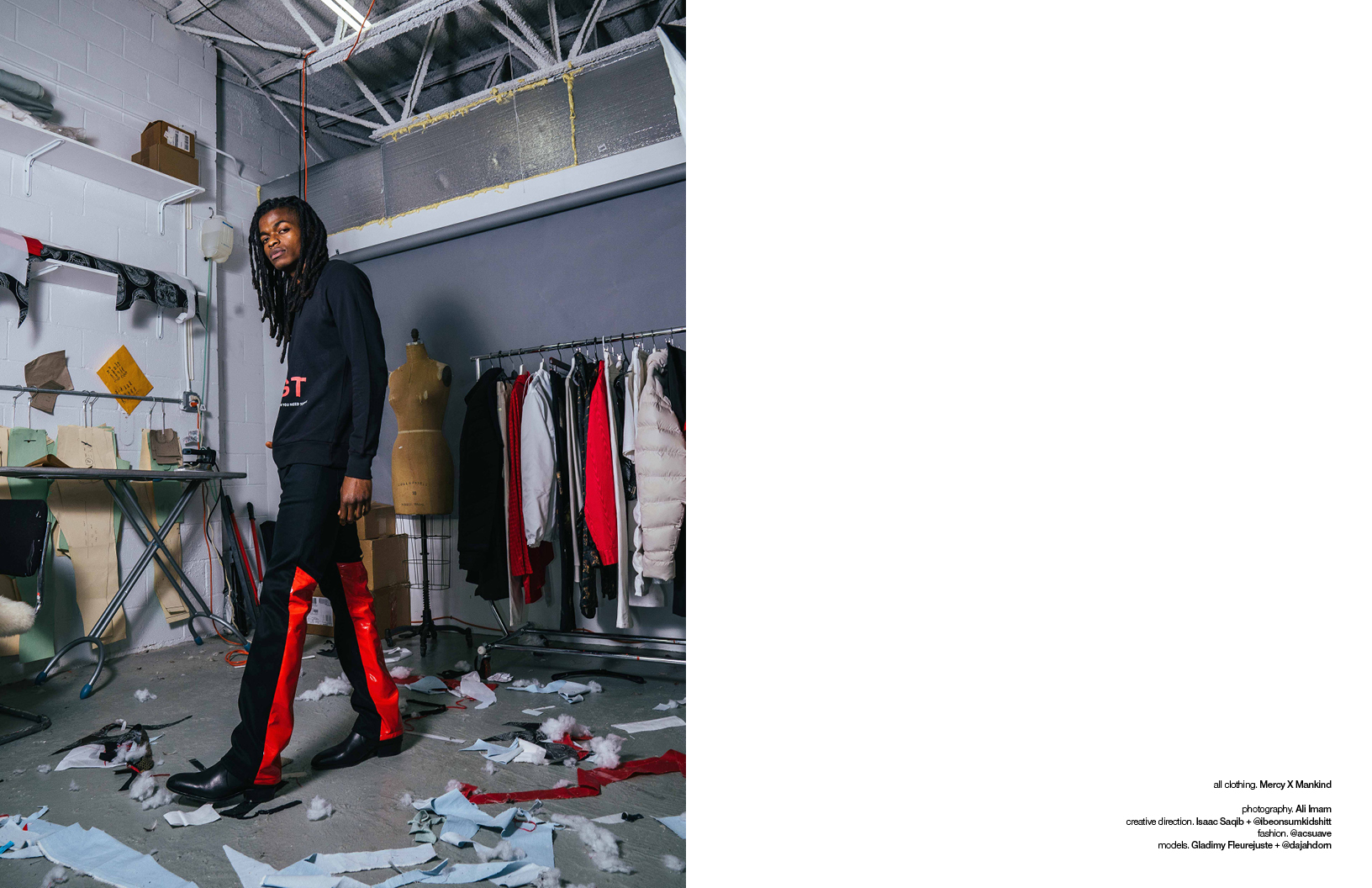