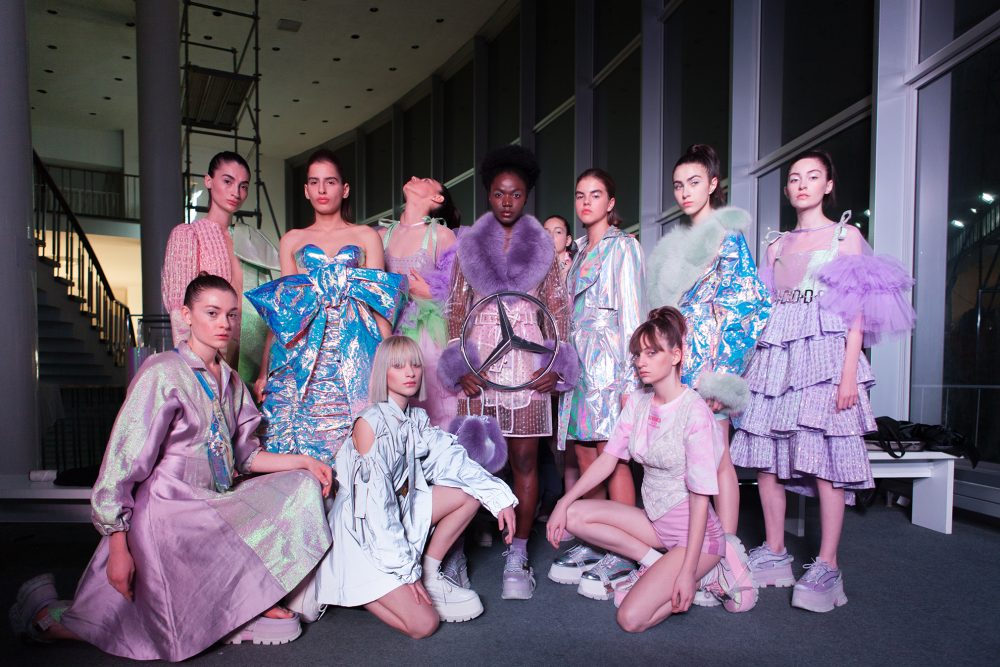 When Schön! first covered Mercedes-Benz Fashion Week Tbilisi in 2015, the week was hot off the heels of Tbilisi’s explosion onto the international fashion scene. Our interview with founder Sofia Tchkonia showed she was a force to be reckoned with, using the expertise developed from a lifetime of work in and around the industry to put the fledgling fashion week on the map.

Today, all her work has paid off, and MBFW Tbilisi truly needs no introduction. Continuing the week’s meteoric rise to international acclaim, Tchkonia and her team have developed events even further, varying locations and designers while bringing in more international models and press to maintain the week’s delightful unpredictability.

At a time when the world’s eyes are finding their way to Tbilisi, events like MBFW Tbilisi show the city’s true cultural power. If Tbilisi’s not already on your design radar, you’re behind — way behind. Here are some shows from the week that caught our attention.

Beginning the events on Sunday was designer Anouki, who showcased her SS20 collection under the Georgian sunshine. Anouki has a long and well-deserved history within the Tbilisi fashion scene, and this collection was a sufficient reminder as to why. Presented with cypress sprouts for every attendee, the eco-friendly collection incorporated natural elements in both its materials and designs, manifesting in the form of vegan leathers, environmentally-sound sourcing, and the floral patterns that graced several looks. Wide shoulders and floaty dresses reigned supreme, coming together to create an undeniably memorable collection.

Immediately following Anouki was Lalo, a knitwear-and-more brand who opted to showcase its pieces in the park’s nearby media centre. While this comparatively sterile location may present a challenge for some, it was terrain Lalo navigated with ease, brandishing their layered textures and patterns amidst the centre’s wall-to-wall books and industrial grey carpeting. Not every piece was so complex; the brand’s occasional simplistic knits and fits also shined — sometimes literally, utilising metallics and reflective pieces in a trend that carried through much of the week. Still, the brand’s true strength lies within its penchant for experimentation and contrast. Pairing oversized knits with wide silver trousers isn’t a move every brand would do, but Lalo does — and we’re glad they do.

Speaking of shine, here is where we’d like to make a special note of Spanish label Dominnico, which joined the week as part of a direct exchange from MBFW Madrid and the Mercedes-Benz Fashion Talents programme. Finding inspiration in everything from Japanese Loli culture to the glimmering and bright style of prominent Instagram influencers, Dominnico presented a line of vibrant works ready for both playtime and showtime. Ruffled pinks, blues and greens made for some of the most eye-catching pieces in the collection, but iridescent works and other reflective pieces also enjoyed a position of intrigue and fascination. This year marks the tenth anniversary of the Mercedes-Benz Fashion Talents programme, and Dominnico’s place as a featured designer is hard-earned. We can’t wait to see what else this designer has to offer.

Aleksandre Akhalkatsishvili is a designer with a lot going on. Not only does he currently helm local favourite and fellow MBFW Tbilisi presenter Matériel: he also has his own namesake brand, which showed its trademark minimalism this past Sunday. Leather factored heavily into this year’s works, notably pairing brown and black leathers with green, orange and a pale yellow. As might be evident in the latter portion of that statement, the designer did not shy away from colour: solid blue and orange fits had a sure standout place in this collection. Breaking up this colourful flow were several all-white fits, which drew similar attention.

Next up, we have Blikvanger. Featuring the broad shoulders and prominent blues seen in other collections of the week, Blikvanger set itself apart with boxy silhouettes and styles lifted directly from the streets of Tbilisi and beyond. Looks were loose-fitting, hurried — a ramshackle patchwork that solidified the brand’s grunge bona fides while defining an undeniably unique style all its own. Some pieces were immune from this chaos; wide suits and white dresses gave the more experimental works some much-needed breathing room.

Presented in the darkness of a converted former silk factory, Bessarion’s finale presentation was distinctly, proudly Tbilisi. Calling to mind the grit and grime inherent to city life, Bessarion offered cyberpunk- and streetwear-influenced looks in black, white and denim. As might be expected at this point, boxy shoulders and oversized fits found a place in this collection as well. This is not a mark against Bessarion; the pieces composing the label’s SS20 collection felt up-to-the-minute, blending past and future styles into an eclectic group that felt at home in the region. As the show concluded, we were sad the week ended — but excited by the design strength put on display over the past days. We eagerly await Tbilisi Fashion Week’s next season, and until then, you can be sure that we’ll be following the Tbilisi scene closely.