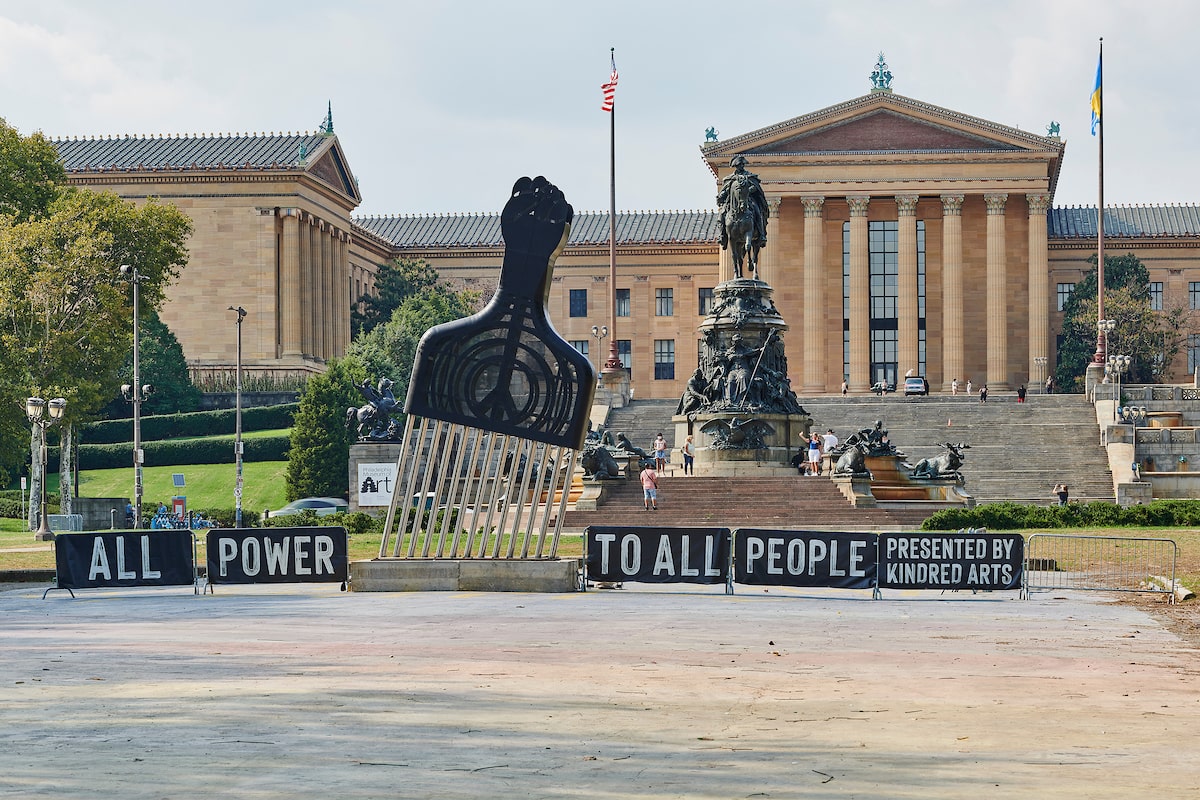 Hank Willis Thomas, All Power to All People, 2020. Photograph by Albert Yee. Courtesy of the artist and Kindred Arts.

You may refer to art as soft power, but never underestimate its capability to portray realities of life and potency to shift changes in human society. Marsha Reid is one of those whose main force of activism is centralised in art. Being an interdisciplinary arts presenter, arts activist and founder of Kindred Arts, she discovers the hidden and unspoken heritage of African-American culture through public displays. Her latest curation, Monumental Tour, is a touring exhibition that empowers social change through the arts. Schön joins Marsha to discuss her relationship with art, activism and Monumental Tour.

How did your relationship with the art world begin?

By trade, I am a tour producer and performance practice curator. A few years after emigrating to the U.S., I joined the team at Lincoln Center that programs and produces the Lincoln Center Outdoor festivals. After four seasons at Lincoln Center I moved on to The Metropolitan Museum of Art, where I managed the Live Arts programs presenting concerts, lectures, festivals and large-scale performance related to artifacts and exhibitions. Touring these monuments is a natural extension of that career experience.

When did you realise that art can both convey a strong message and potentially facilitate social change?

I’ve been aware of the power of art from a very young age. I am West Indian (Jamaican/Guyanese), and we have a rich culture of art and performance that has survived centuries and exhibits itself primarily as parade. A fact that is often lost on most spectators of indigenous Carnival, junkanoo, or Mas as it is sometimes called, is that the revelry, performance and exhibitionism of Carnival is a resistance against cultural erasure and homogenisation. Exhibiting our art and cultural heritage as an act of resistance is in my DNA.

Other moments that cemented my understanding of the impact of art on society are when I heard Nina Simone’s Mississippi Goddamn for the first time, and then again when I learned of Baba Emory (Douglass). 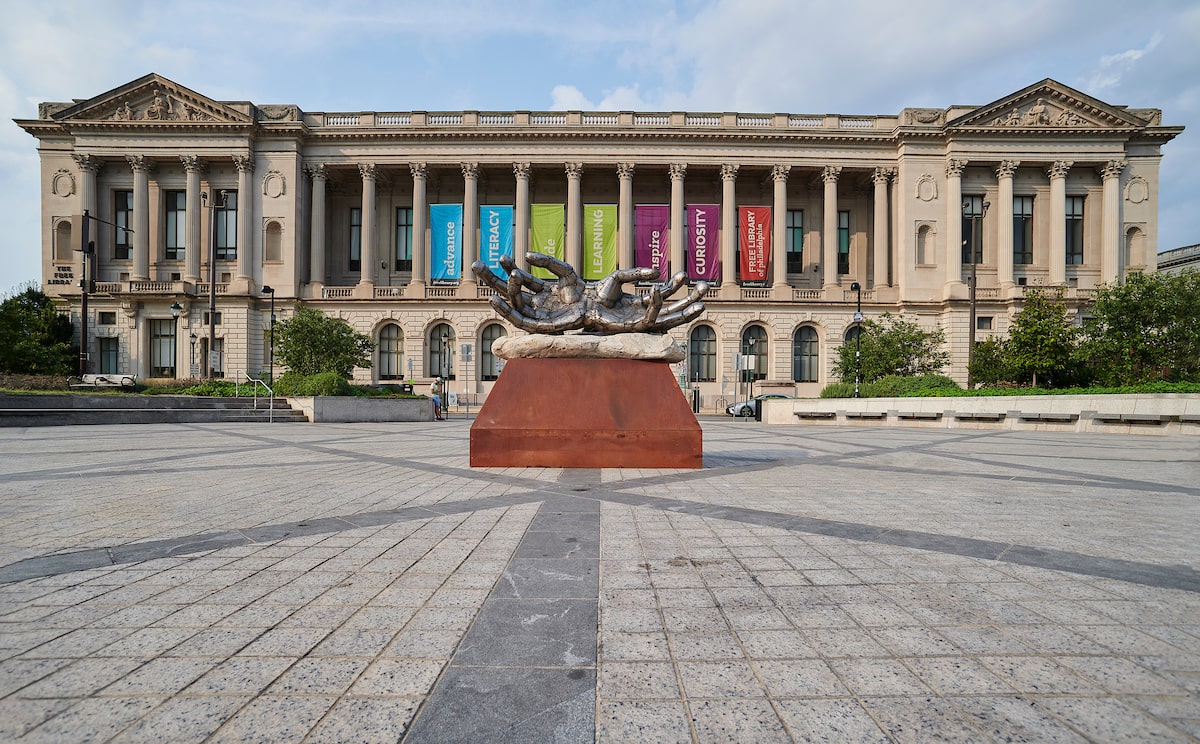 Do you have a special bond with a specific piece of art? How it was formed and why?

That would have to be: All Power to All People. The 28-foot Afro pick was a collaboration between Hank Willis Thomas and Kindred Arts, birthed from his vision and produced by Kindred at scale for Burning Man, as an offering and education. We dreamed out loud about creating this monumental piece of art and enough and beautiful souls loved the idea, raised the funds, and #AllPowerToAllPeople became a reality.

Can you tell us more about your decision to take such an important path in presenting African American experience culture via art? How did you realise such a task was necessary?

I started the organisation Kindred Arts approximately 15 years ago while working for an arts institution downtown. Creating and executing public programs, I would travel uptown to Harlem where I was raising my family and felt keenly the stark contrast and lack of arts access in the community.

I saw firsthand the tragic results of the encroachment of corporate and government interests on local arts policy; there was little support of POC artists; and no nurturing of accessible, thriving venues for POC expression; and clearly an unfair distribution of programmatic, financial and informational resources.

There are systems of power that grant privilege and access unequally such that inequity and injustice result, and that must be continuously addressed and changed. Acknowledging and challenging inequities and working in partnership is how we at Kindred feel we can contribute to affecting that change.

Everyone deserves equal access to a full, vibrant creative life. We began by negotiating use of Harlem green spaces and building them out temporarily for culturally specific public programs, pop up markets, community arts, music festivals, and screenings. The national Monumental Tour is an evolution of these beginnings. 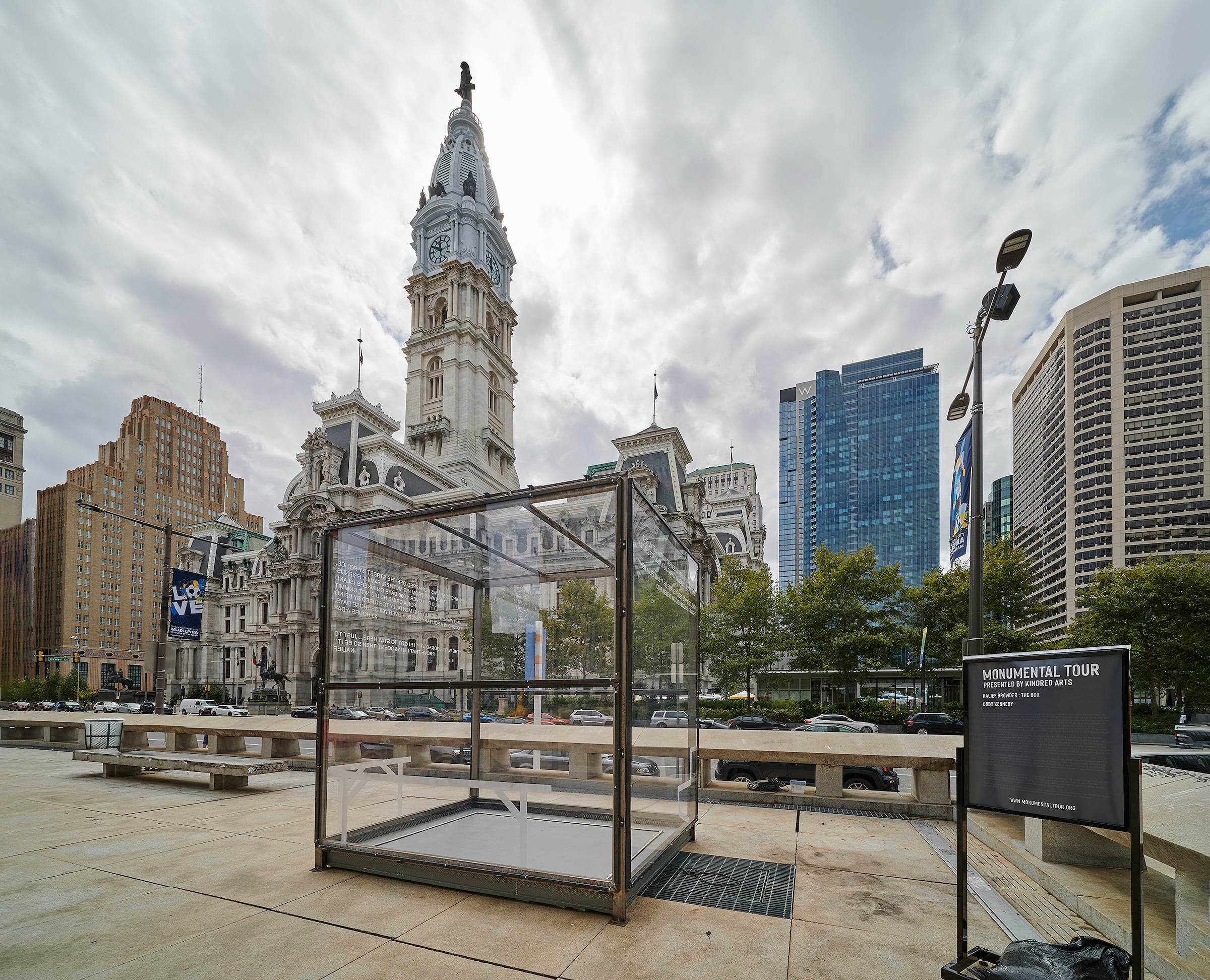 Let’s talk about Monumental Tour. Can you introduce our readers to this project?

Monumental Tour is a touring exhibition empowering social change through the arts.

Kindred Arts works with municipalities, institutions and agencies to navigate access to ‘public spaces’ and to build out those sites in a way that exemplifies how American public art can inspire equitable commemorative landscapes. In these sites, inclined citizens may participate, be affirmed, and become informed,

With this monumental exhibit, we offer the public an opportunity to engage with questions of symbolism, history, and the genealogy of artifacts. We aim to confront issues and advance conversation around systemic inequities, police brutality and the questionable historical legacies that are cemented into the public sphere.

We ask: How do we facilitate the productive civic dialogue needed to shape the national identity in the long term? And, how can we use this dialogue and our voices to create fundamental change in the American experience?

What were your main focuses when curating this tour?

The physical objects provide opportunities to generate interventions that are less ephemeral. They make it possible to anchor our histories and the stories that we are sharing with something tangible. This is the focus when I am selecting a site and imagining public program possibilities around the exhibition in each new city.

What can you tell us about some of the artists + works featured on this tour?

The works call attention to each artist’s distinct visual voice and simultaneously they engage with one another in a curated discourse. Collectively, the works honour and examine aspects of the African-American experience, from the first slaves brought over in the 16th century to the present-day prison pipeline and the struggle for liberation in between.

Individually, the sculptures invite the viewer to consider themes such as: colonisation, oppression, privilege, Black middle-class labour, and the decline of industry, Black pride, Black power, Black joy, and subjugation. Each work is an invitation to viewers from any background to learn about and connect with a narrative or era they may not have endured personally, but one which continues to impact the African-American experience. 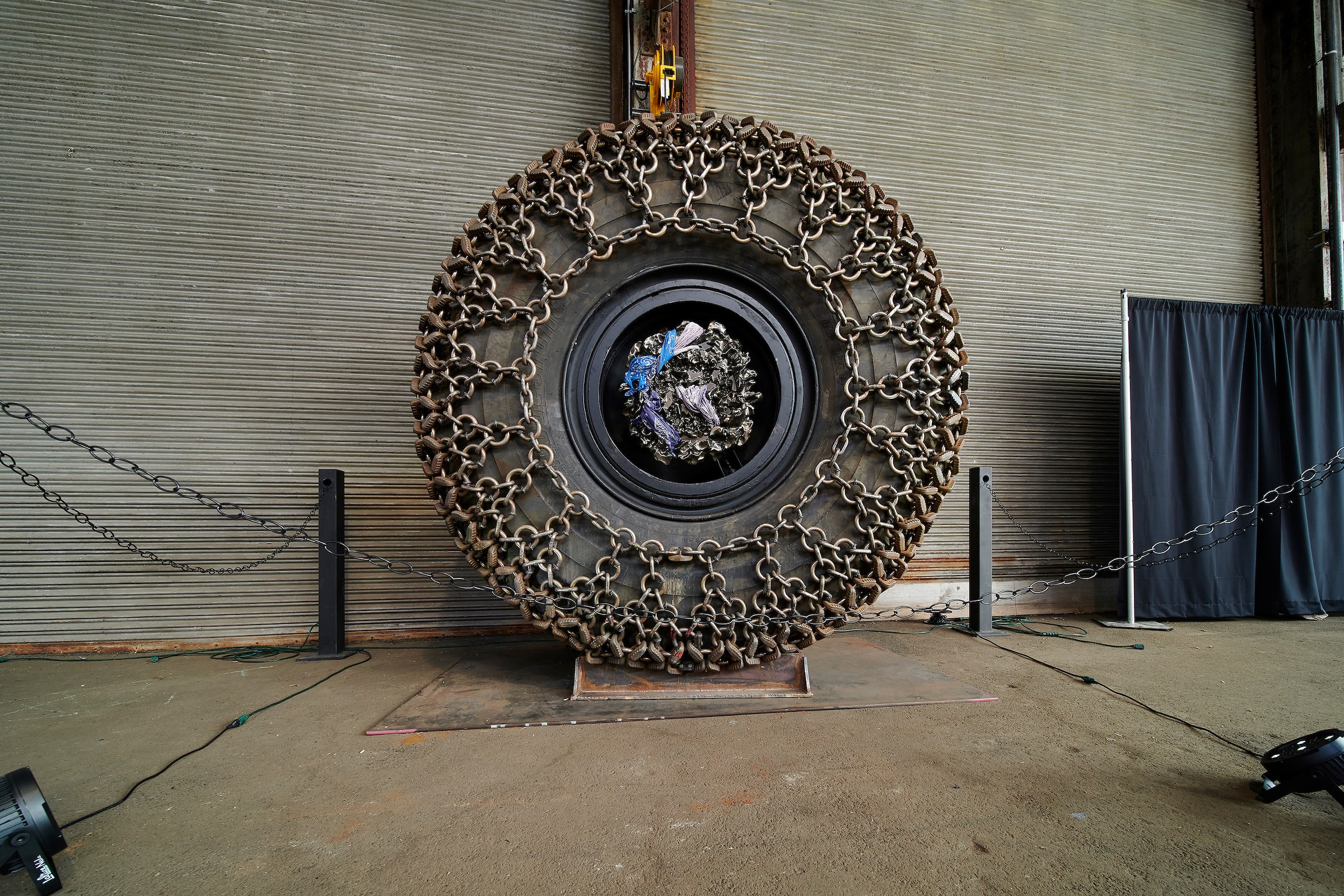 How do you think Kindred Arts elevates the cultural heritage of African-Americans?

I would frame what we do as making room for narratives other than the dominant one. Our mere existence challenges the questionable historical legacies that are cemented into the public sphere and that we accept as the norm.

We ask: How might we facilitate the productive civic dialogue needed to shape the national identity in the long term? And, how can we use this dialogue and our voices to create fundamental change in the American experience?

As Kindred Arts features monumental art, how do you think this genre explores a culture and its heritage? What’s so special about using monuments specifically?

Interestingly, none of the currently featured artists would say that sculpture was their primary medium. Sculptures and monuments require space. As such, much of my work is negotiating the right to be in public space. To hold space is a powerful thing, which makes space inherently political. As municipalities and cultural institutions re-imagine community engagement in a post-uprising and post-Covid society, there exists an opportunity to fundamentally rethink how we program outdoor public space to reflect and honor all human identities and experiences.

What else excites you about this project?

The opportunity to elevate our shared cultural history and experiences. Our stories must be repeated.

What do you think the role of art is in today’s frenetic pop culture?

Art has always heralded revolution, bringing unrest and social issues into the mainstream of culture, and I believe that these monumental works have a role to play, especially in today’s frenetic pop culture.

What can we expect from you and Kindred Arts in the future?

We are currently working on 2022-23 tour dates and growing our cast of featured works. We look forward to meeting and building community in as many states as will have us! And, as the world opens back up, Kindred will continue its original work of producing interventions in public spaces that speak to community and that celebrate our unique cultural traditions. 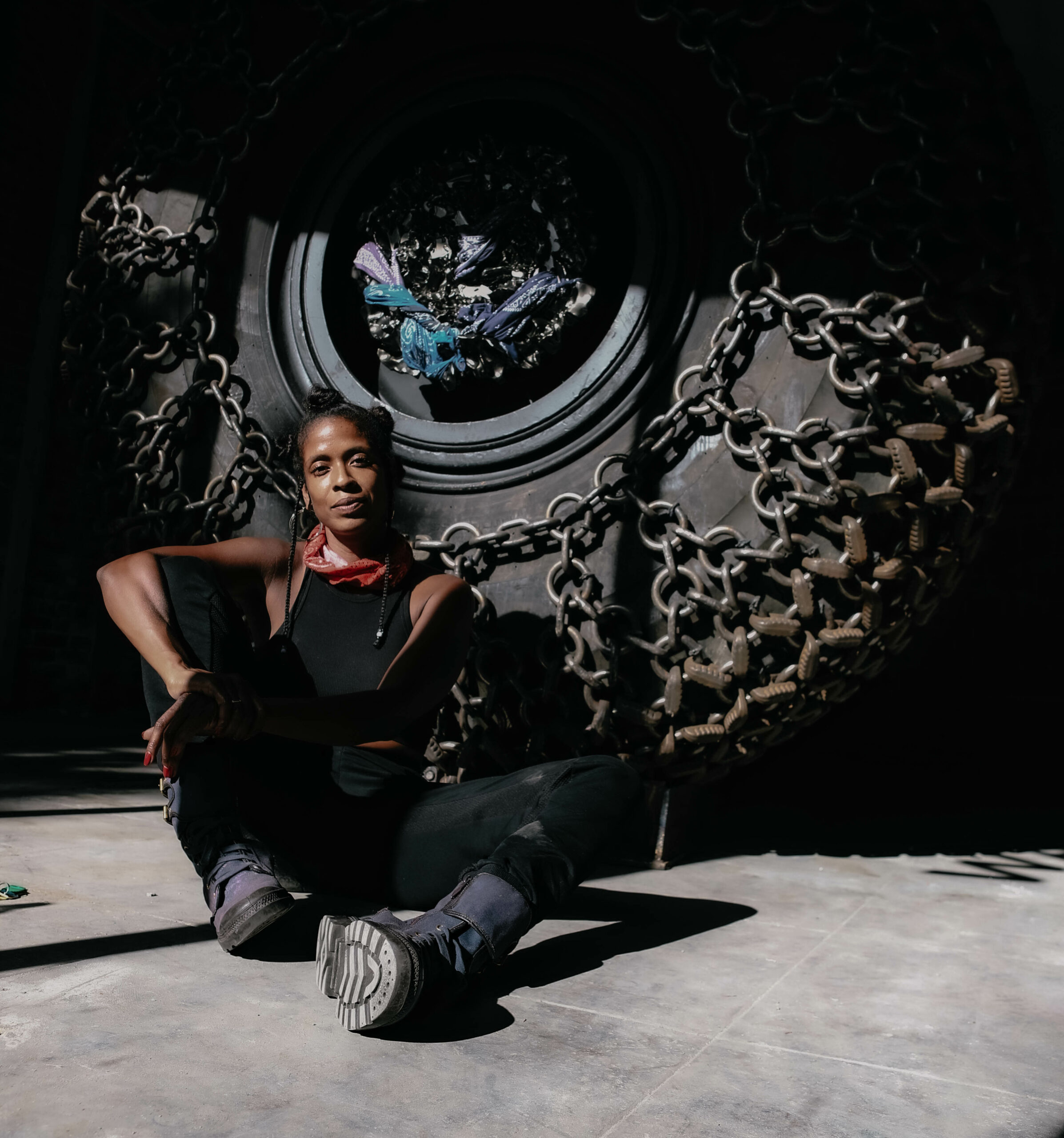 Monumental Tour is on view in Philadelphia, PA, USA through 31 January 2022.