Once confined to subculture, past decades have seen graffiti evolve into an established and commercialised art form. Proving that the anarchic spirit responsible for its initial popularity still lives on, are JonOne’s (real name John Andrew Perello) electrifying paintings, which are highly abstract but also filled with strong references to its street origins.

Perello’s current exhibition —A Dream Longer than Night at the Montresso Foundation in Morocco— is one of his most ambitious projects to date. It’s the culmination of his residency at the Jardin Rouge – the foundation’s creative ‘laboratory’, which invites artists from all over the world to develop a personal project. The foundation has historically supported graffiti and street artists, providing them with alternate materials (such as paints and canvases) so that their work can be displayed within a gallery and sold. For emerging artists, Perello’s seminal exhibition certainly pays testimony to street art’s capacity to develop into a fruitful career. In an exclusive interview with Schön!, Perello discusses the formative years that led up to this monumental show.

Born in Harlem in 1963, Perello came of age at a time when street art was beginning to flourish. During the 1970s, Washington Heights, an area just North of Harlem, became the epicentre for the movement: a young Perello would make frequent trips there, which he likened to visiting a ‘museum’. “The movement started in my own neighbourhood and I saw all the early pioneers,” he recalls. “I wanted to participate in my own way, so I went to a store and started to do tags in my building, and eventually tags in the street”.

Whilst maintaining that he wasn’t a victim of his environment, Perello spent much of his youth on the brink of poverty. In 1984, he established the graffiti group 156 All Starz, in part a means of escapism, but also in a direct effort to combat the neighbourhood’s drug epidemic by shifting the focus to art. Going around the city tagging subways and walls allowed a group of young renegades to feel part of a community, which is, essentially, what Perello values most about graffiti. “It’s family where everyone knows each other all over the world. That’s why it stands out from other art”, he explains.

Wanting to reach out to the wider street art community, in the late 1980s Perello moved to Paris, a city he considers “the European style centre for graffiti”. He remembers how New York street art was a lot ‘rougher’ and ‘hardcore’, characterised by images of “guns and arrows”; indicative of the prevailing drug abuse and violence. “Paris was more poetic”, he states. Perello remains working in the city to this day, producing most of the works for A Dream Longer than Night in his Paris studio. 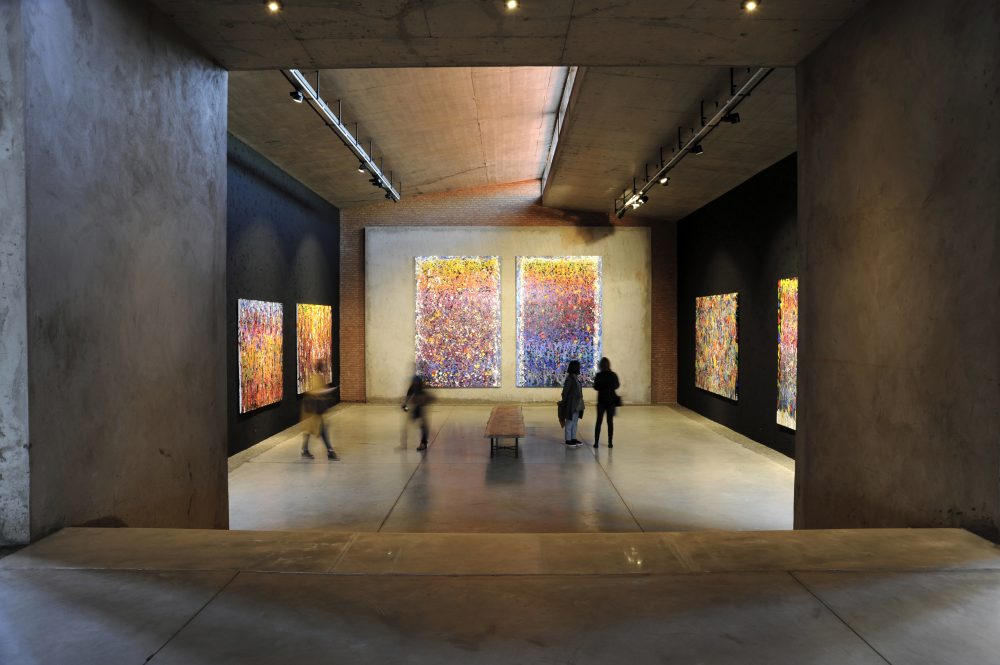 “Energy, colour and movement” is how Perello summarises his art. Nowhere does this description seem more fitting than in the Montresso Art Space, where the canvases burst with lattices of multi-chromatic paint, in gestural splats, smears and scrawls. Amidst the webs of paint, one can see JonOne’s tag, repeated in obsessive ritual. Created using oil paint, a medium typically renounced by street artist, the paintings manage to replicate all the dynamism and spontaneity of spray paint. Despite the cacophony of the paintings, there is still a strong sense of cohesion, created by the colour schemes, which are often organised in rainbow gradients.

The freedom in creation is compelling, and the sense of pure thrill and enjoyment is what JonOne ultimately hopes to impart upon viewers. Liberated from dogma, he describes the canvases as reflecting “changing moods”, and the natural surroundings of the Jardin Rouge. From the streets of Harlem to a rural setting in Marrakech, JonOne’s art posits graffiti art as a universal language: one which has the power to uplift and exhilarate regardless of whether found on the streets or within the confines of a gallery.

JonOne’s solo exhibition ‘A Dream Longer than Night’ is open at The Montresso* Art Space until January 31, 2018.

All images and video courtesy of Montresso* Art Foundation.