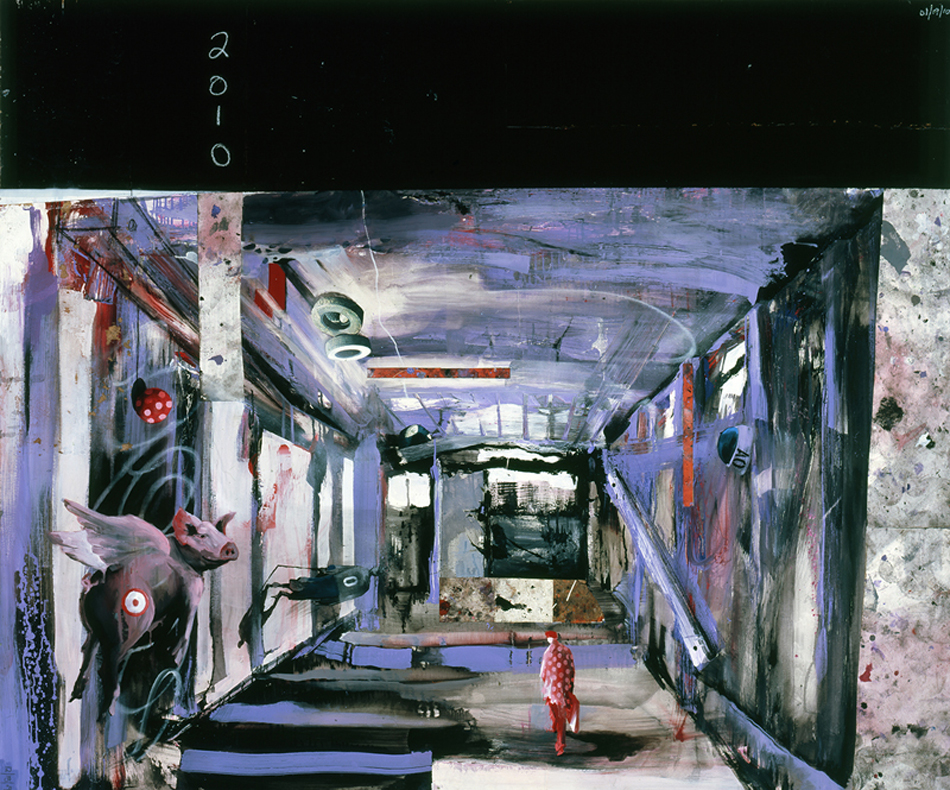 Modern Urban Expressionism, the name for the style in which Marcus Jansen paints, is a culmination of the influences of a life of diverse experience. Jansen grew up in New York City where the graffiti art movement first inspired him to paint, honed his craft in Germany where he was introduced to the methods and ideas of the German Expressionists, and spent time as a combat soldier during the Gulf War, magnifying the role that global awareness would play in his work. Schön! spoke with the Florida-based artist while he was in New York for the opening of his solo exhibition at the Lower East Side’s Castle Fitzjohns Gallery about his experiences with spontaneous expression and the changing face of the art world.

How did you find your unique style- what elements inspired your personal mode of expression?

Initially graffiti art. Graffiti art was a big thing…I was born in the sixties, so my teen years was sort of in the eighties so that was when graffiti art here in New York was a really big deal. And I was introduced to a friend of mine Wes One who was sort of a graffiti legend on the Upper West Side in the seventies. At the time he used to do the number 1 train and he was sort of the first graffiti artist that I got in touch with and sort of inspired me to paint. And then I went to Germany of course and I was introduced to some of the German masters and Robert Rauschenberg’s work, which I was very interested in at the time, and it was a combination of those things…the abstract expressionists also. I liked the idea of the spontaneous sort of instinctive painting. It wasn’t so much about copying something with precision, but it was more about sort of the direct relay of the feeling.

Can you talk a bit about your process? Do you have a clear direction before you begin or do the pieces evolve spontaneously?

Absolutely evolve, it’s a very instinctive approach. I might have a reference material in front of me, I might not. I generally have an idea in terms of topic and subject matter that sparks my interest. But the rest is sort of an exploring during the process of painting itself. It can take me in any direction that it wants and I allow it to. So it’s more of a…it’s working through the process of painting, not only focusing on the subject but also working through the process and the paint process itself. There are all kinds of things that happen that are interesting to me, and I allow those things to happen, so there are no preconceived notions really as to what the painting is going to wind up looking like. At some point the work speaks to me or it says something and at that point I stop the painting.

So you always know the moment it’s done?

Do you think that spontaneous expression can convey something that a planned piece cannot?

Absolutely. I’m all about spontaneous painting. It’s the innocence of it that drives me, and that’s where I think we can get to see things differently. This whole decomposing of paintings has always been of interest to me. Realism isn’t a standard. I can see this glass here and I can paint exactly what I see in that glass, which you could too if you go to the academy and learn how to paint exactly that, but it doesn’t tell me anything at all. But if I respond to it…if I respond to how I feel about the glass, you’ll get a different response. So I’m more about sort of interpreting the feeling or responding to the feeling of something than just visually sort of copying what you see. 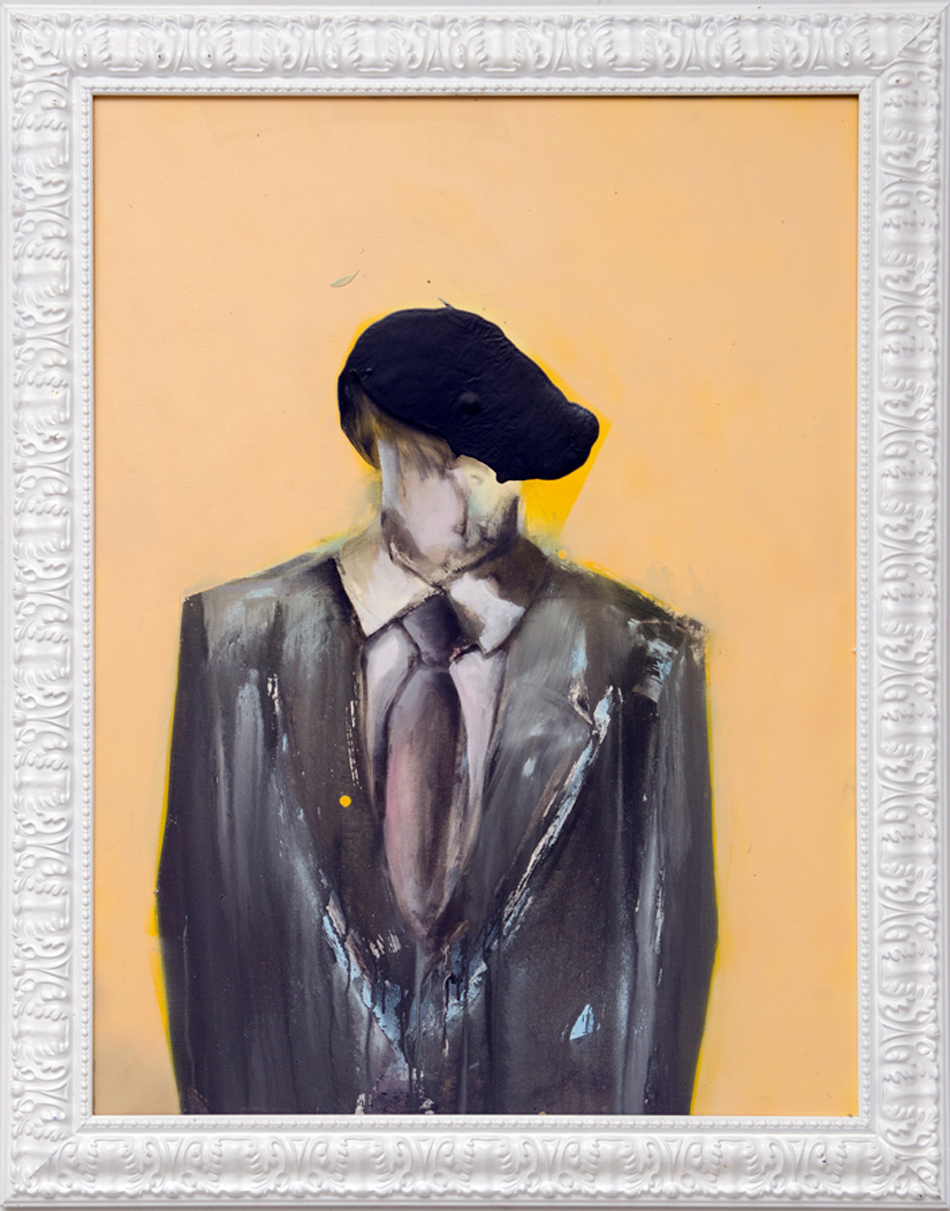 Can you talk a bit about the inspiration behind your “Faceless” paintings?

I started those in maybe 2011, the first ones, end of 2011, 2012…a little bit of a departure from what I was doing with the landscapes and so-forth. And initially it was inspired by the sort of front of corruptness going on all over the world and this sort of shift in power with people making decisions that we don’t even know. So it’s in some ways exploring anonymity and also secrecy of who these people are. So I started with people with suits… people that were familiar to us but we didn’t know, we couldn’t identify.

Your work seems to definitely be influenced by current social and political issues. Do you think that art influences the state of the world or just vice versa…do you think it goes both ways?

I think it can go both ways. In my case of course I’m hoping that the works don’t really center so much on any particular message but more sort of on starting a dialogue. A lot of it is gestural painting, so there’s sort of a suggestion in it but there’s not really any particular meaning that I’m trying to get across. It serves more just as a commentary to some of the things that are happening. 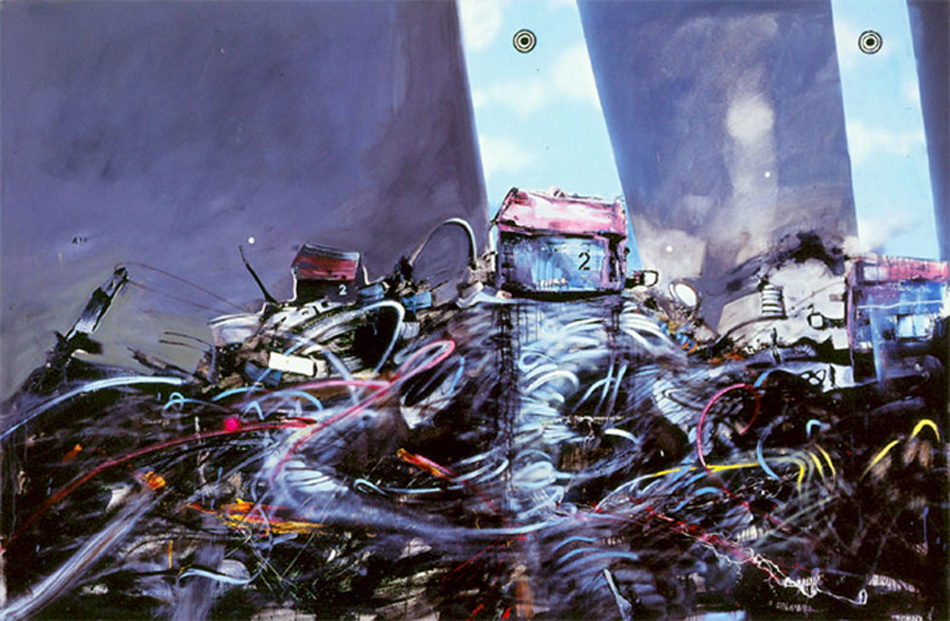 What do you think about the state of the art world right now as opposed to when you started?

Well, it’s a completely different world. First of all, the business aspect of art is different than it was back then. Art’s become big business. Largely everything’s a commodity. So from that perspective it’s also- there’s a certain amount of control over the art world, and that of course changes the direction probably in which artists go…in which artists paint. At the end of the day of course it’s about making money and selling, at some point you have to survive, and that of course does have an impact on the market, in terms of what’s shown, in terms of how things are produced.

What do you think about making a living through art? Is there a balance an artist must find between unfettered expression and supporting oneself through their work or do you think that an artist can do both without anything being compromised or lost in their artistic expression? If you’re trying to make money off the work, does it effect what you make?

Yeah, I think so. I think that’s one of the issues…when I started with these really urban scenes and everything, I mean nobody was painting anything remotely close to what I was doing, at least not that I know back in the nineties, and I had a lot of people that came up to me and said “you’ll never sell these works” … “it’s just too gritty”. And I had some issues with the galleries initially. They just sort of wanted to get me to water it down a little bit, sort of fit the mainstream of things. So any time you’re doing something a little new or a little different, you know, you need some kind of financial support to push it, and because of that of course you do have artists that tend to appease the market. Like I said the market always dictates. You know, even if it’s just subconsciously, you’re very aware of what sells and what doesn’t sell. I try to as little as possible have that sort of regulate at least my basic idea and my premise and sort of philosophy in terms of where I was going with the work. I just kept pushing it and somehow it became, I think even with time, as the world sort of changed and politically, socially people are much more aware now than they were let’s say ten years ago or twelve years ago, nobody was really paying attention to politics then, and now it’s more like everybody’s somehow involved. It makes you realize that things are changing rapidly.

You can see Marcus Jansen’s work at the Castle Fitzjohns Gallery in NYC’s Lower East Side through March. The artist will also have a solo show at London’s Lazarides Rathbone Gallery this coming October.