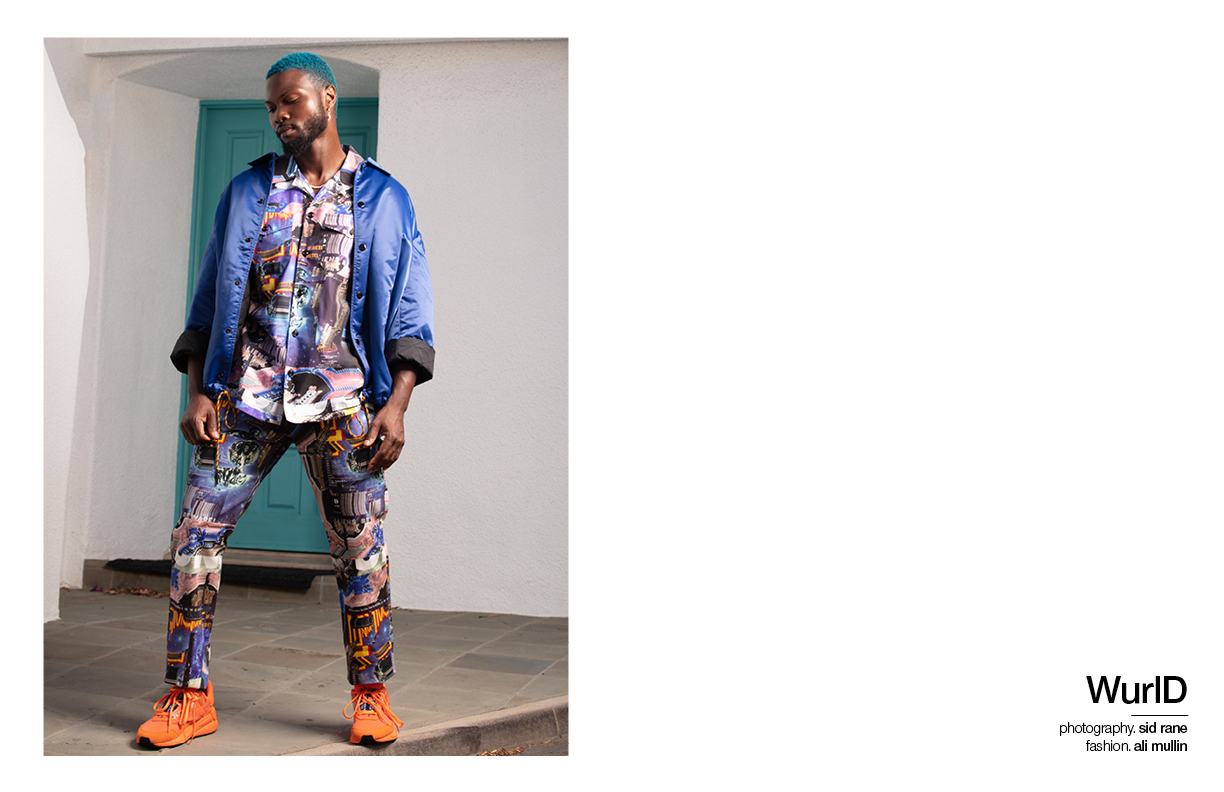 WurlD is here to change the narrative. As one of the most exciting artists at the forefront of the Nigerian music scene, the soft-spoken, blue-haired musician holds his authenticity close to his heart. The Lagos-native weaves between genres, sounds and styles with ease, in the hopes of reintroducing African music to the world.

Having released three musically diverse projects over the past two years, the anticipation for his debut project has continued to steadily build. What attracts his wide diverse fanbase is his effortless hand over  a multitude of styles: from the serenity of Love Is Contagious to the energetic Afro-fusion of I Love Girls With Trobul and the soul-infused AFROSOUL , with every project the star dares to bring us further into his vibrant and detailed world.

As he releases two new singles, Spunk and Stamina, WurlD chats to Schön! about the introspective process of creating his new album, taking a step back during the pandemic to evaluate his future and where he wants to take his music. We also learn more about his humble journey from songwriter to emerging superstar.

Let’s start with your name, how does it represent who you are as an artist?

WurlD is inclusive. The meaning of my name is my ‘world’ with ‘U’ in it, which is the title of the new album. I’m in LA trying to reset my mind and get ready for this.

You recently moved back to Nigeria. How was spending time there  during the process of working on the new album?

In the pandemic, I spent the whole year in Nigeria. Lagos is like no other place. The energy out there, all that energy, and just reconnecting with the people. I’ve grown so much watching everything around me change. All of that inspiration, you can’t pay for those things and what it does to my music. Having been and seen so many places, it really transcends and shows my growth from Africa to the rest of the world.

Who are some artists within Nigeria’s thriving music scene that inspire you?

I’m inspired by so many artists from Wizkid to Davido to new artists like Burna Boy, Omah Lay and even Rema. We’re all in this bubble creating different things. the world is going to see a much wider range from African creatives. It’s going to get more universal and the communication will get better with time as people learn the culture.

Lately, you’ve been preparing to release your debut album. what can we expect from this project that we may not have heard in your previous releases?

This is a new WurlD phase. It’s a lot grungier and a lot more raw than the previous projects. I’m bringing people a lot closer to my world, there’s another side that’s very human and very flawed. I realised that I have fans who love the zen Love Is Contagious, fans that love the Trobul WurlD and then [fans who love] the Afrosoul WurlD. Going into this album, I had to figure out the narrative and how to tie these fans together whilst expanding my fan base to a new audience.

How do you go about remaining authentic within your music?

I’m focused on what feels right, regardless of opinions, I take them for what they’re worth, but at the end of the day when it comes to me releasing music and sharing energy, I focus on what feels right. That’s the only thing that I can hold on to and making sure that I’m sharing my truth and being real with myself.

You previously worked as a songwriter, how did this experience aid you as an artist?

Being an African living in Atlanta and wanting to do music, people didn’t take me seriously. I knew there was one thing that everyone needed and that was songwriters. So, I started songwriting for country artists, R&B artists and rap artists. I found myself in so many genres of music just wanting to be a part of something. That journey really did help me to build myself as an artist because I’ve worked with so many different people and sounds. I can see myself in different spaces.

As a visually driven artist, what has been your favourite visual to create so far?

I would say Wishes and Butterflies. We shot this in LA in one take. It was so me. We were shooting another video and I wanted to take advantage of the time! We had real butterflies on set and if you watch the video there’s a part where the butterfly just lands by the window and it was so impromptu. Another one is Show You Off which was a turning point for me. It was the first visual that got me reintroduced to Africa.

What can we expect from a live WurlD show?

Energy! On stage I’m bringing the energy, the vibes, the soul, the singing. It’s really just energy and high frequency. I feel like I communicate my madness, my rage and love through my music.

If you had to choose two tracks to best show your range as an artist to someone that hasn’t listened before, which would you choose?

I would say Mad and then we’ll go all the way to So Good. So Good is on my first project. It’s a stripped-down guitar record with beautiful vocals. Then Mad is this high-energy, Afrobeats-infused sound. We have the chants in there that bring all of Africa together. 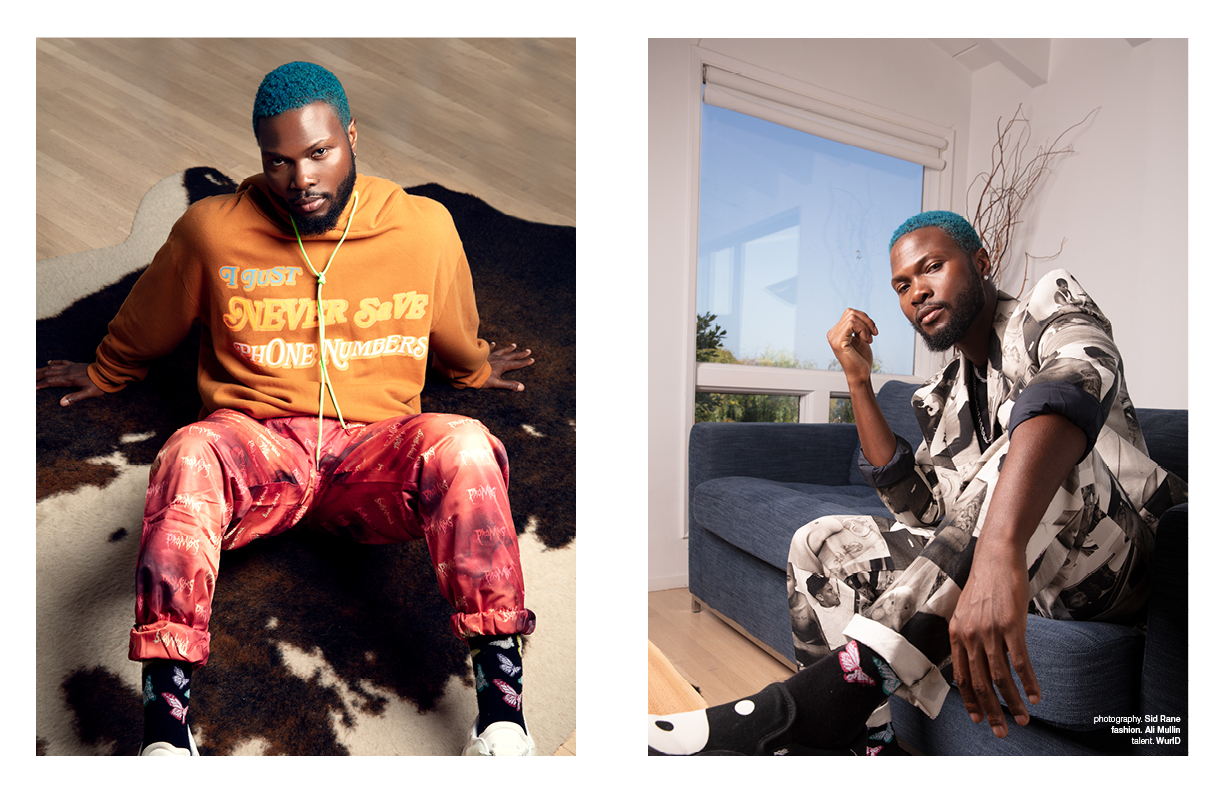