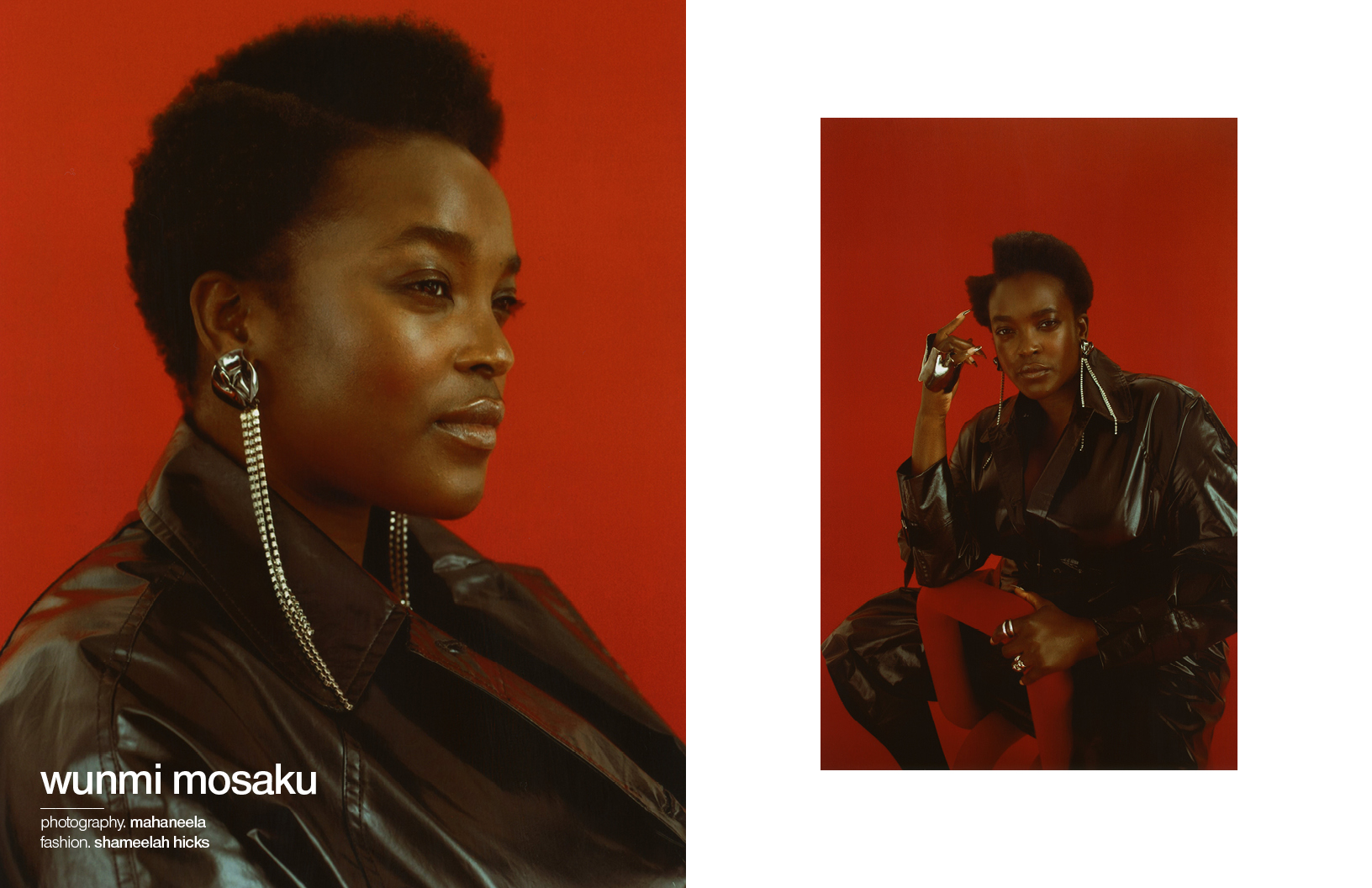 It has been over a year since the entire world shut down due to the pandemic, and BAFTA TV award-winning British actress Wunmi Mosaku is speaking to us via Zoom while quarantining in her childhood bedroom. “I still find the whole pandemic quite extraordinary,” says Mosaku. “Every so often, I can’t believe this is the world we live in now.”

And if things had been different, Mosaku probably wouldn’t have been an actress. “I think I would have gone to Manchester University and done something else.” Meaning, the world would have missed out, because Mosaku – with her 50+ acting credits – continues to amaze viewers with every single one of her performances. From her incredibly moving performance as Gloria Taylor in Damilola, Our Beloved Boy, to her commanding performance as refugee Rial in the horror thriller His House, Mosaku’s next adventure is Hunter B-15 in Marvel’s Loki on Disney+. Mosaku spoke to Schön! about life, her various roles and all things Marvel.

How are you doing these days?

Feeling good. I still find the whole pandemic quite extraordinary. Every so often, I can’t believe this is the world we live in now. And I am very grateful for my health and my family’s health. I miss them. I’m quarantining in my mom’s house, and then I’m kind of just in my bedroom, my childhood bedroom, talking to my mom through the door, which is great. It feels so good after a year and a half of not seeing anyone. But it’s a lot. It’s very intense. And now [looking back on all of it], I don’t even know if I would have gone down to London for drama school because I would have wanted to stay closer to home. I definitely wouldn’t have gone on a date with an American that I ended up marrying. I mean, it’s the best thing that ever happened. But I know I wouldn’t have gone on that date. My whole life would have been totally different. And I don’t even know if I’d have been an actor. I think I would have gone to Manchester University and done something else. I’m sure of that.

Huge congratulations on your BAFTA TV award for best supporting actress in Damilola, Our Beloved Boy. A few years on, how do you feel?

I feel very proud of that film. I feel a lot of love and respect for the Taylor family for sharing the story — they’ve used Damilola’s death in such a positive way for young people with the Damilola Taylor Trust for education and for the community. I feel very grateful that I was a part of that project and got to meet those amazing people. And yeah, it has always felt bittersweet, because it was a huge moment in my life, but from such a tragic moment in their life. It’s not something I can just ride the waves of without feeling profound sadness of what has happened.

Totally understandable. Fast forwarding a few years later, let’s talk about your time as Detective Sergeant Catherine Halliday on Luther. What attracted you to that role?

You know, I feel like Halliday was kind of similar to me in a way. I feel like she’s got this joyful, young energy, and she’s in this dark world and sometimes she just kind of bounces through with her pink blouses. She is the only one wearing this kind of colour! She is just very sweet. And I just loved the juxtaposition of her character in Luther’s world. I felt it was the first time I’ve played someone who was kind of like me. She just has a lightness about her, and so I did like that. I was like, I’ve never done this before. I always play quite heavy roles, you know? 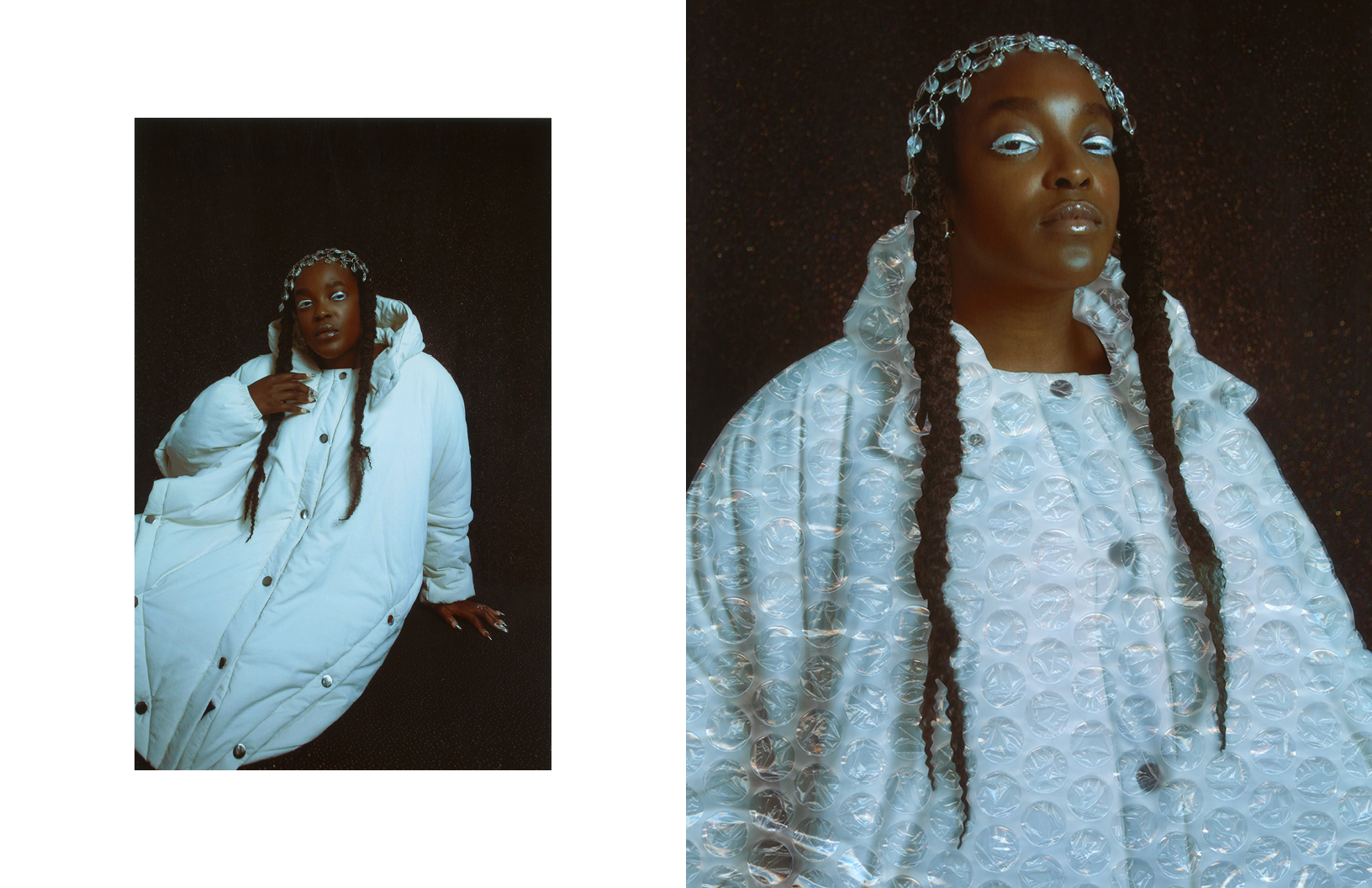 Your role as the detective was pretty different to your role as Rial in His House. Tell us about your time as Rial and what you learned from that experience.

So, His House — again, there’s a responsibility when you are playing these characters because they’re not real characters, but it’s based in a truth. So, I don’t know, I felt this responsibility of getting it right and telling the story correctly, because these are people’s lives and people’s experiences. We had to do a lot of research — we listened to a lot of video and audio testimonials of people who had travelled through the human trafficking system to the UK, to claim asylum and their experiences throughout that journey and after. And so, I felt a huge amount of responsibility to get it right and to do their story justice. Because the idea of getting something so important wrong just fills me with dread. You want to get it right, you want to honour their lives, their struggles, their humanity. I want to say there’s a weight to that, but again, and what happened on Damilola as well was that this weight is juxtaposed with the pure joy and delight of being with these people telling the stories and working really hard. It is also about knowing that you’re trying to do something that is going to leave a positive imprint.

As if going to a completely new place wasn’t scary enough, His House takes an arresting socio-political immigration story and strategically adds horror – all of which make the experience truly haunting both on-and-off-screen. Do you think the movie correctly portrays some of the grim realities in our society even today?

Yes, I think for me, it’s that people are walking around haunted by what men can do, and what people can do, and what governments can do. And they’re walking around with that every day. An important message is to not forget it, not to take it for granted, and not to ignore it. Also, to try and see past the facade that people present. For example, in the last image of the film where Bol and Rial are surrounded by all these people, and only then do you realise that they’re haunted by it all. They’re haunted by everyone, all of their experiences, all the people that they have traveled this journey with, that they’ve lost and that they’ve met. They’re surrounded by them all the time — 100% of the time. That the house isn’t haunted, it’s them, it’s us. We are haunted by everything we’ve ever experienced. So, an important takeaway is to remember that and to remember that when we are interacting with people, it is important to not make assumptions.

Why did you want to take on your role in Loki now? And tell us more about your character, Hunter B-15.

You know, I wasn’t someone who knew all the Marvel films. I basically started with Black Panther and loved it. I was really kind of enamoured by it because I wasn’t expecting that. I kind of thought it was going to be a lot shallower, and then when I saw Black Panther, I thought the questions that they’re bringing up meant something to me. As an African woman in America, and married to an African American, I felt like, oh, I see and feel this. And I was not expecting that. I was very, very pleasantly surprised. That’s when I was kind of converted into a fan of Marvel. And when I auditioned for Loki, I didn’t know I was auditioning for Loki, or in fact, Marvel.

When I got the part, my director spoke to me through the whole of the Marvel Universe, from Captain America, Iron Man all the way to Episode One of Loki. It took three hours. When I was explained the journey of the show, and what it means in the larger scope of the Marvel Universe, I knew I wanted to be a part of it. Yeah, I mean, I think I would have taken the risk even if she hadn’t explained it to me, because I loved Black Panther so much. Such an amazing movie. I just didn’t know I was auditioning for Loki until they offered me the part.

On Hunter B-15 – she is a high-ranking hunter for the Time Variants Authority (TVA). She’s someone who plays by the rules, is fair and doesn’t do nonsense. She’s kind of hard and there’s a military aspect to it because she’s just super strong and can handle herself physically. She’s really tough. 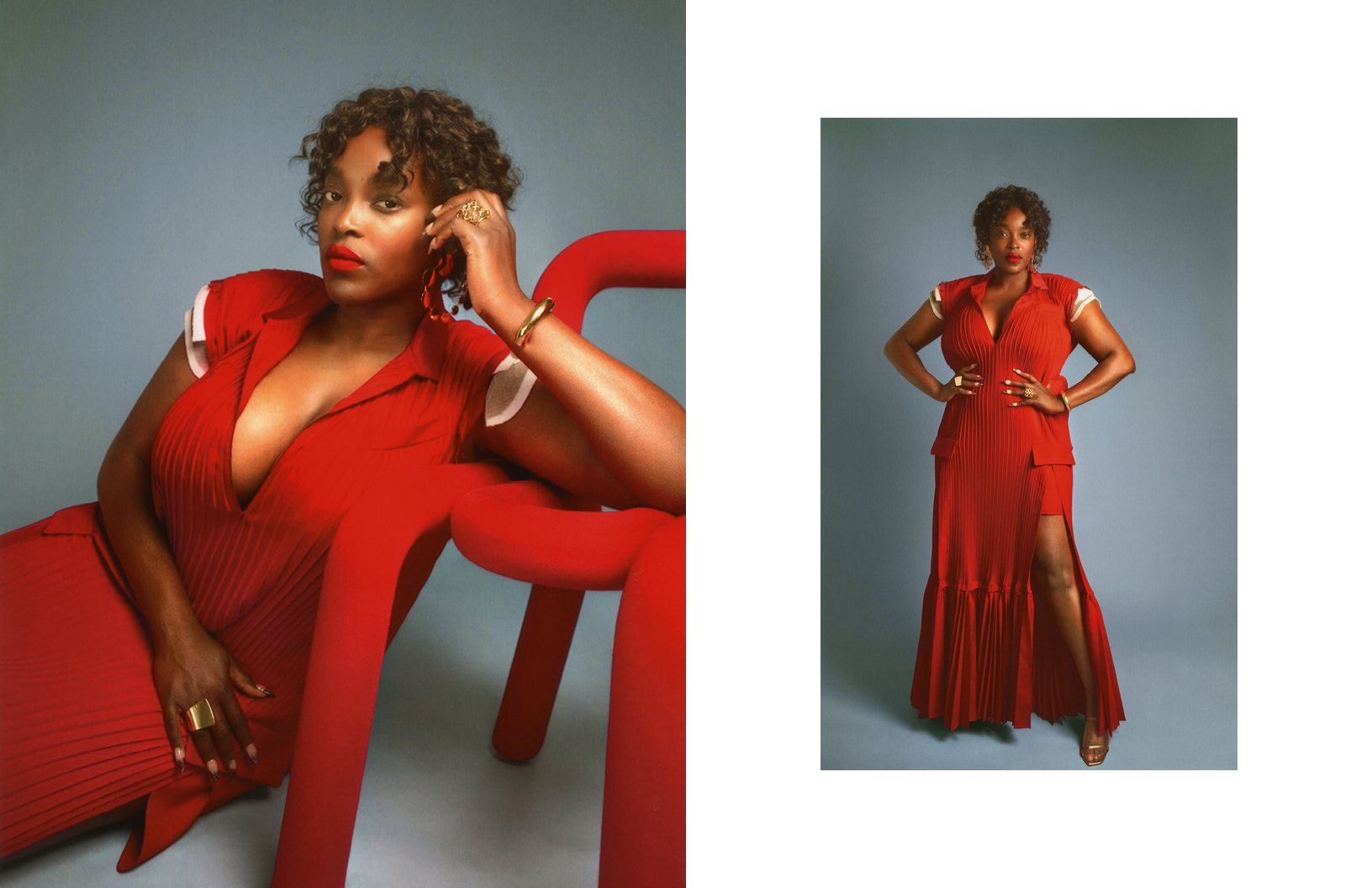 As expected, the show already has a huge fan base. There is an argument that this early fan base could expect certain things, and thus, could be more critical than usual when receiving the show. What are your thoughts about this?

I try not to think about what the audience is going to think about, because if I think about that, I am filled with anxiety and stress — like, am I ever going to work again? Tom Hiddleston loves Loki. He loves Marvel, he loves the fans. He cares. So, I know that, and I know that we all have done our best. And that’s all. I mean, that’s how I go into auditions, and that’s how I come out. I hope that it’s received well and exceeds expectations!

Out of all your roles over the years, what has been your favourite to play and why?

There are three. The first two are real-life characters, like Gloria Taylor and Mende Nazer in I Am Slave. The honour of playing those and being responsible for telling their stories correctly — nothing tops that feeling! It is important that the work that we’re doing means something and that it’s important to people’s lives. I would say I also really loved playing Ruby in Lovecraft Country, because I learned so much about myself as a Black woman living in America. As a Black woman from the UK, and as a Black woman living outside of one’s home, Nigeria, I’ve learned so much about speaking up finally. And I also learned to love myself more through playing Ruby. I also loved being on a set with a lot of Black people for once. And a female showrunner. It’s so much about playing that character, but it’s all the things that come with it! And having Misha Green as our leader. I learnt so much about being a strong woman in this industry, and a strong Black woman where I’m speaking up and speaking truthfully, which is something I had never done before Lovecraft Country. All those conversations were just never had outside of the house – conversations about race, inequality, patriarchy, white supremacy. I’ve never had those conversations outside of my house. So, having the opportunity to do that? I mean, I love Ruby, and I love what being on that set meant, for me personally. More than anything, that was my growth, and my development was a huge, huge thing.

I’m working on a film called Call Jane right now with Elizabeth Banks and Sigourney Weaver in Connecticut. And then I don’t know if I can talk about Canada job just yet… 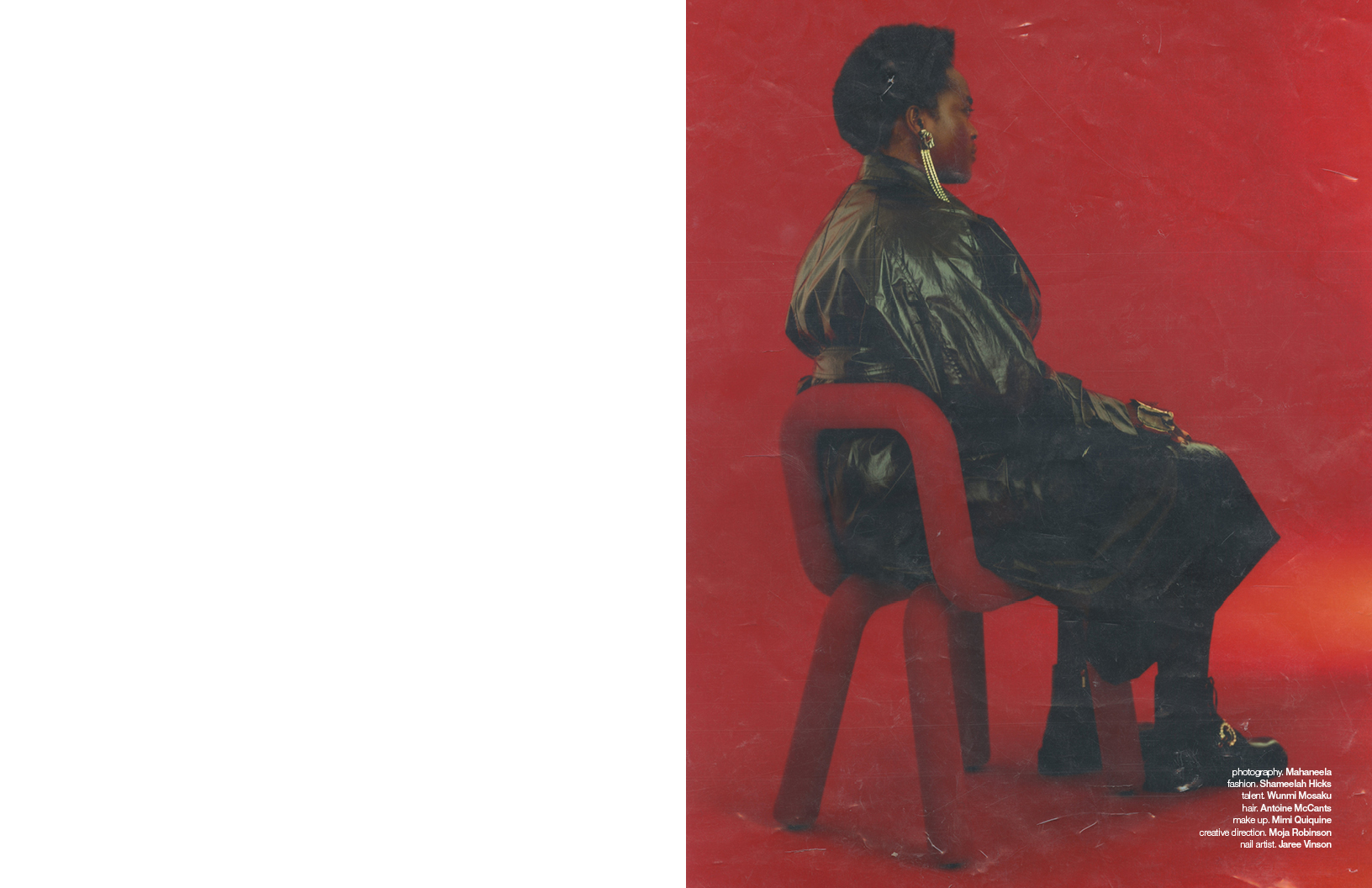 Loki is currently streaming on Disney+.