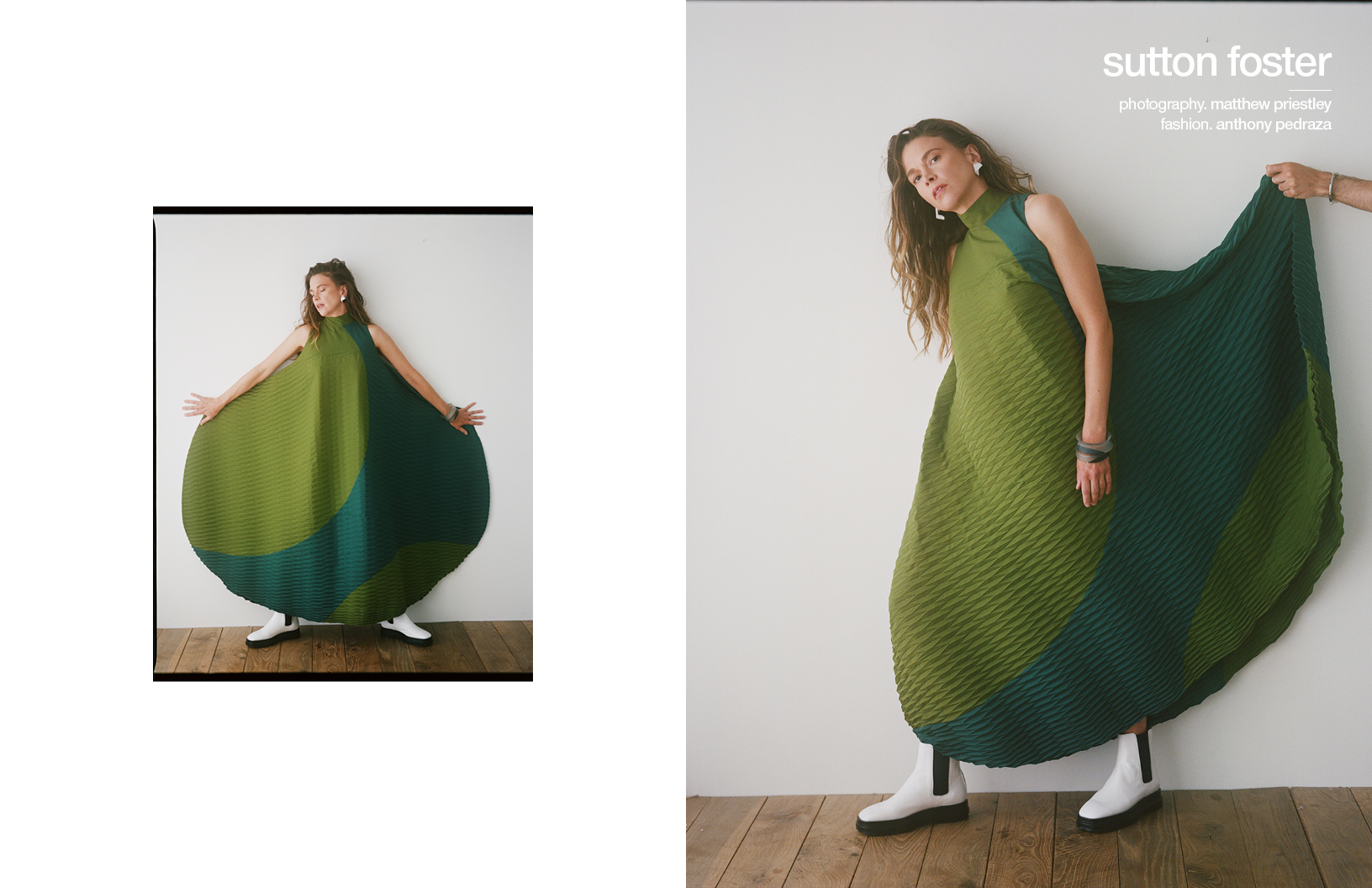 Younger may not be so young anymore now that its seventh and final season has just wrapped, but it’s the start of a new chapter for its star, American actress Sutton Foster. The end of the pandemic marks a new beginning for many of us; for Sutton, that means leaving behind her character Liza, the publication of her forthcoming memoir, a return to her roots under the bright lights of Broadway and a drastic hairstyle change. “It seems so silly, but I chopped my hair off,” she explains. “I was like, I’m cutting off seven years of my life. And I’m moving into a new chapter.”

Younger tells the story of Liza Miller, a divorced mother in her 40s who passes herself off as a 26-year old in order to reenter the publishing world. Throughout its seven season run, the series has cultivated a steadfastly loyal fanbase with its grappling with issues of ageism, how women navigate the workforce, their trials, triumphs, and personal and professional relationships. Created by Darren Star, the very same of Sex and the City and Emily in Paris renown, many of these themes run throughout his oeuvre. Sutton describes its rise in popularity over the first few seasons as a “slow burn,” but attributes its ultimately whopping success to the same themes that first drew her to the project: “It’s inherently optimistic and hopeful, and really about reinvention. And I think everybody wants that opportunity, or to celebrate that in someone else.” 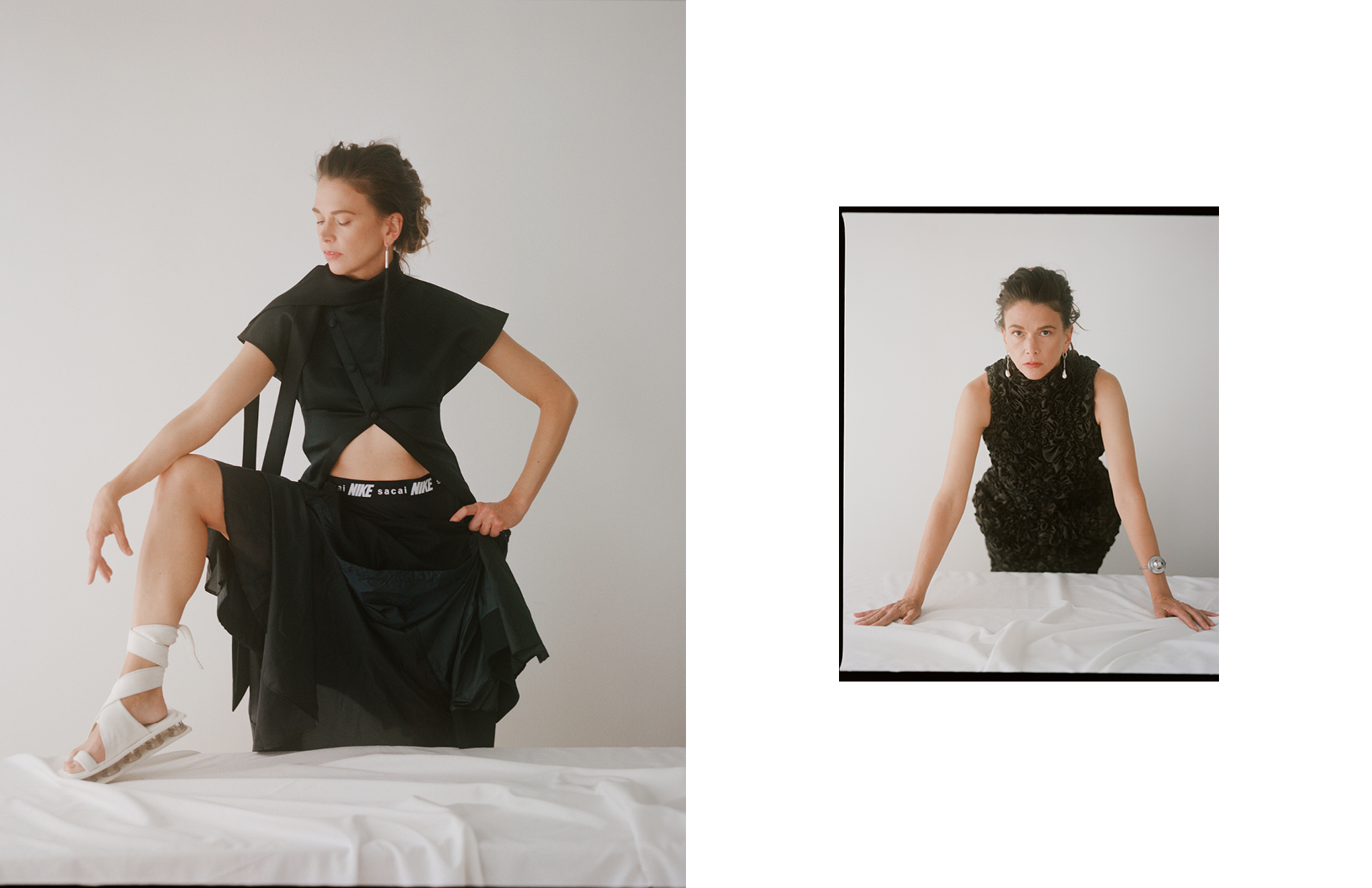 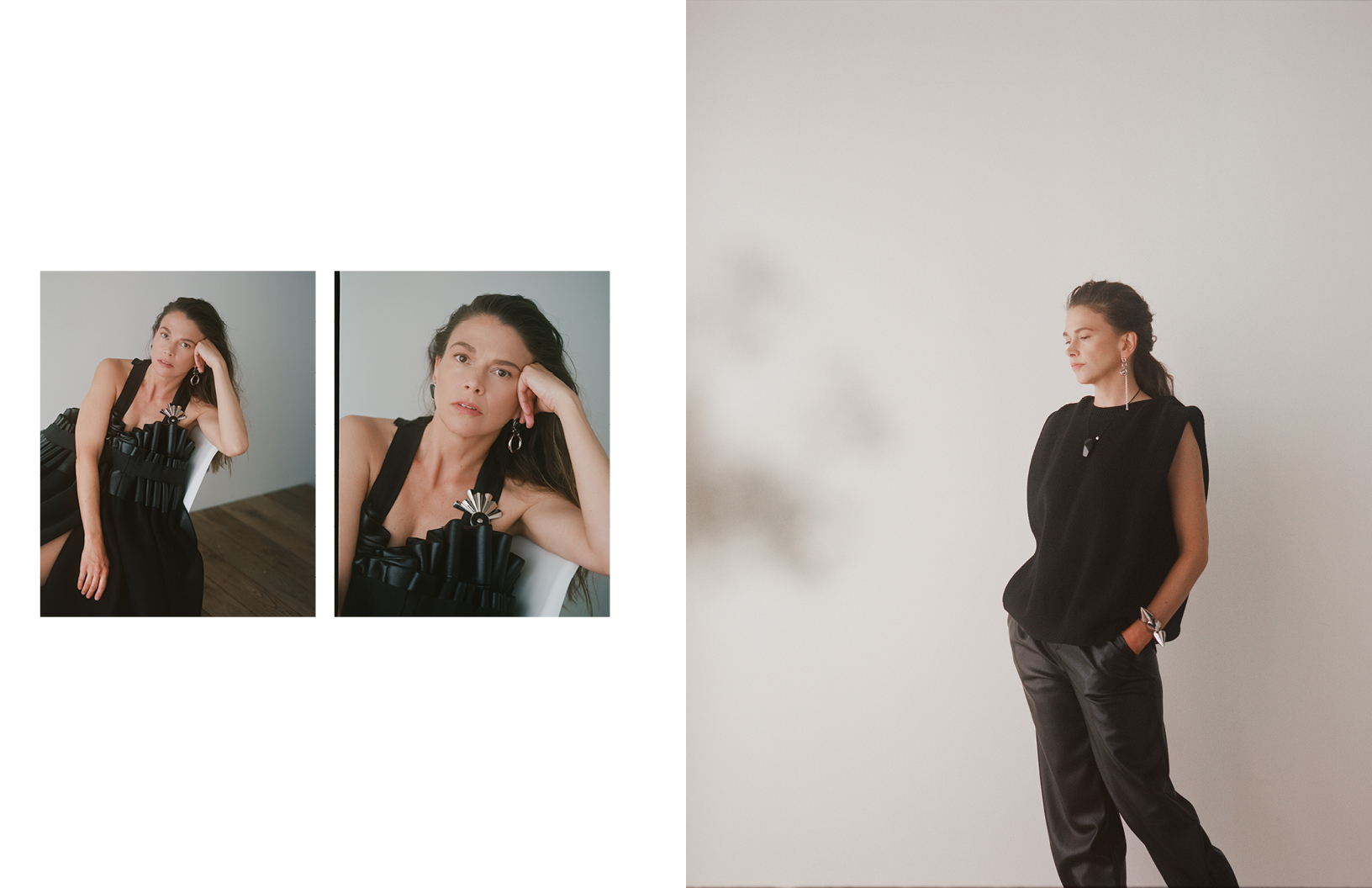 Georgia-born and Michigan-raised, Foster is a bona fide Broadway veteran who rose from the ranks of understudies early on in her career to become a leading lady in her own right. Today, she counts two Tony Awards and four nominations to her name. In 2012, she landed her first starring role on television on ABC Family’s much loved but short-lived Bunheads, which was cancelled by the network after one season.

The script for Younger landed in Foster’s lap at the age of 39, just a year shy of Liza’s age. Herself divorced, in a new relationship, her mother having recently passed, and 20 years of Broadway under her belt, she was seeking a reinvention of her own. Playing a role straddling two distinctly different generations isn’t an easy feat, but Foster knew she could pull it off. “I just understood it,” she shares. “And then in many ways, it paralleled the last seven years of my life, which were different from Liza’s, but as a whole — we were sort of going on this whole new journey together.” Seven years and seven seasons later, Foster has remarried, adopted a daughter and hit a slew of other milestones alongside Liza, who in turn has experienced work promotions, love and loss of her own and the ultimate reveal of her big secret. 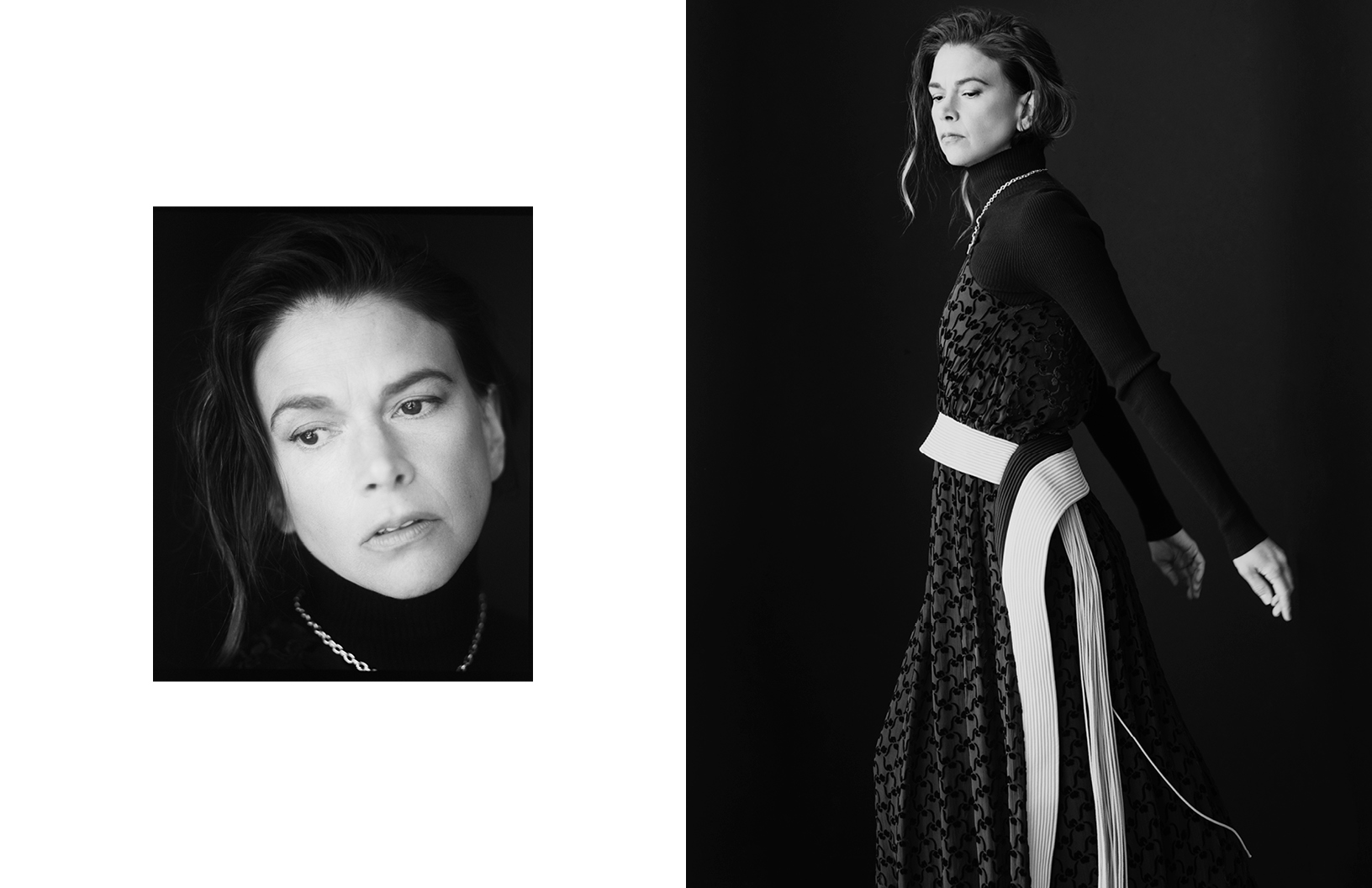 Foster describes Younger as the thread throughout all these major moments, but the quite literal thread that’s kept her centred throughout her life and career has been crafting, which also happens to be the theme by which she frames her memoir, Hooked: How Crafting Saved My Life. Quite the title, but if doing puzzles or picking up the paintbrush kept you sane in lockdown, you’ll know just how cathartic it can be.

Coming out this autumn, Foster says that this memoir has really been in the works since her mother passed in 2013. Being the daughter of an agoraphobe who became a Broadway and television star, one of the ways in which her mother connected with her was teaching her how to cross-stitch. Cross-stitching led to crocheting which led to painting, collaging, cooking, gardening and undoubtedly other talents she’s got up her sleeve. “I have a blanket called the ‘divorce blanket’ from when I was going through my divorce with my first husband,” she says. “It’s this beautiful, intricate thing, you know, because I was really working through something.” Now, Foster says she made her new husband a 50-striped blanket for his 50th birthday. She also reveals that she headed up the crochet club on set of Younger. If the thought of Foster and co-star Hilary Duff crocheting together backstage doesn’t spark joy, a scroll through Foster’s Instagram is highly recommended for some wholesome crafting content.

Capturing life’s moments through craft has gotten her through the highs and the lows, and it’s how she’s chosen to narrate the events in her memoir: “[The crafts are like] this little time capsule that is way more than just an object. But I just thought well, this would be a really interesting way to tell my story. So it’s not a typical memoir.” Hooked comes out on 12 October. 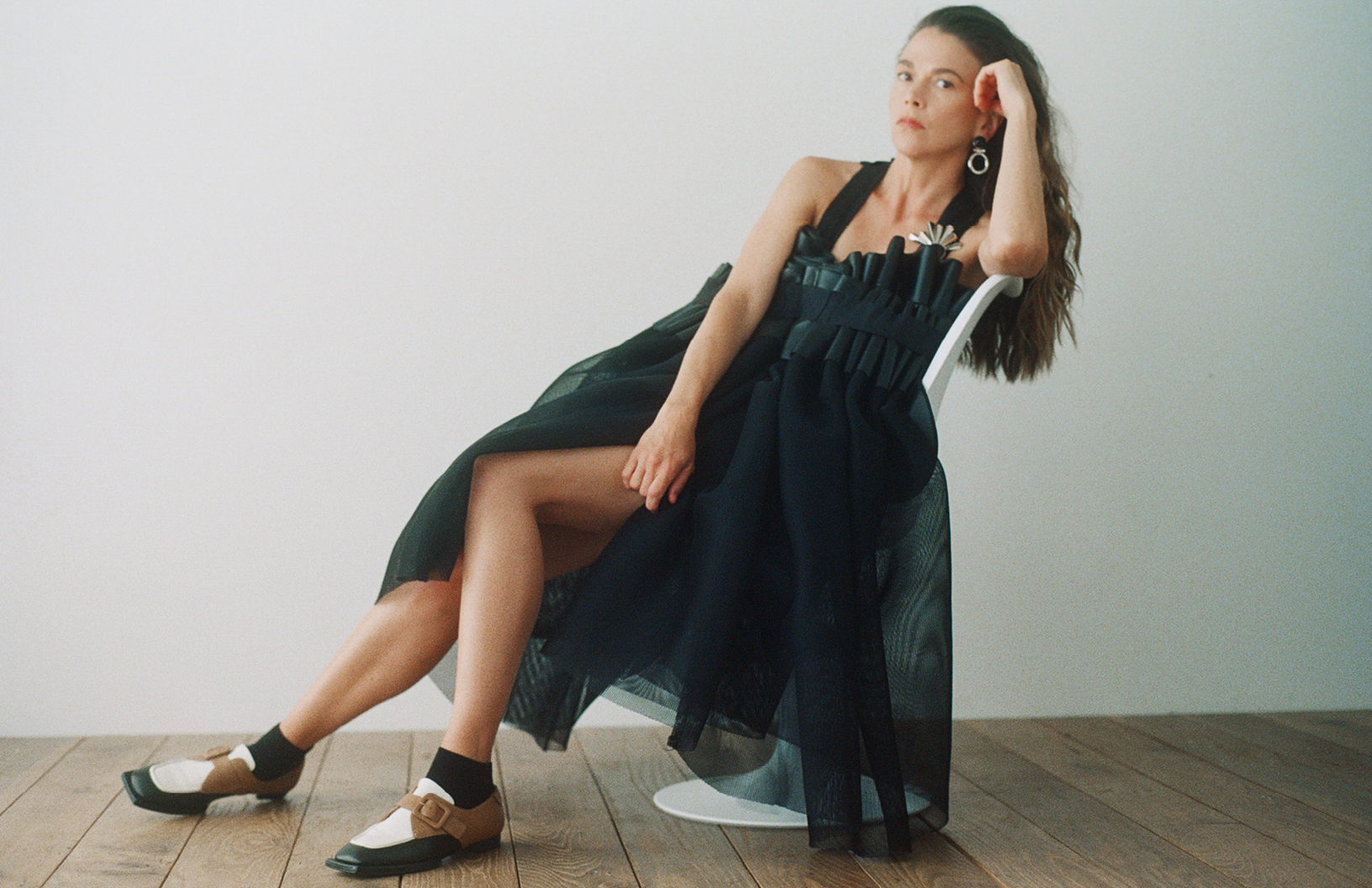 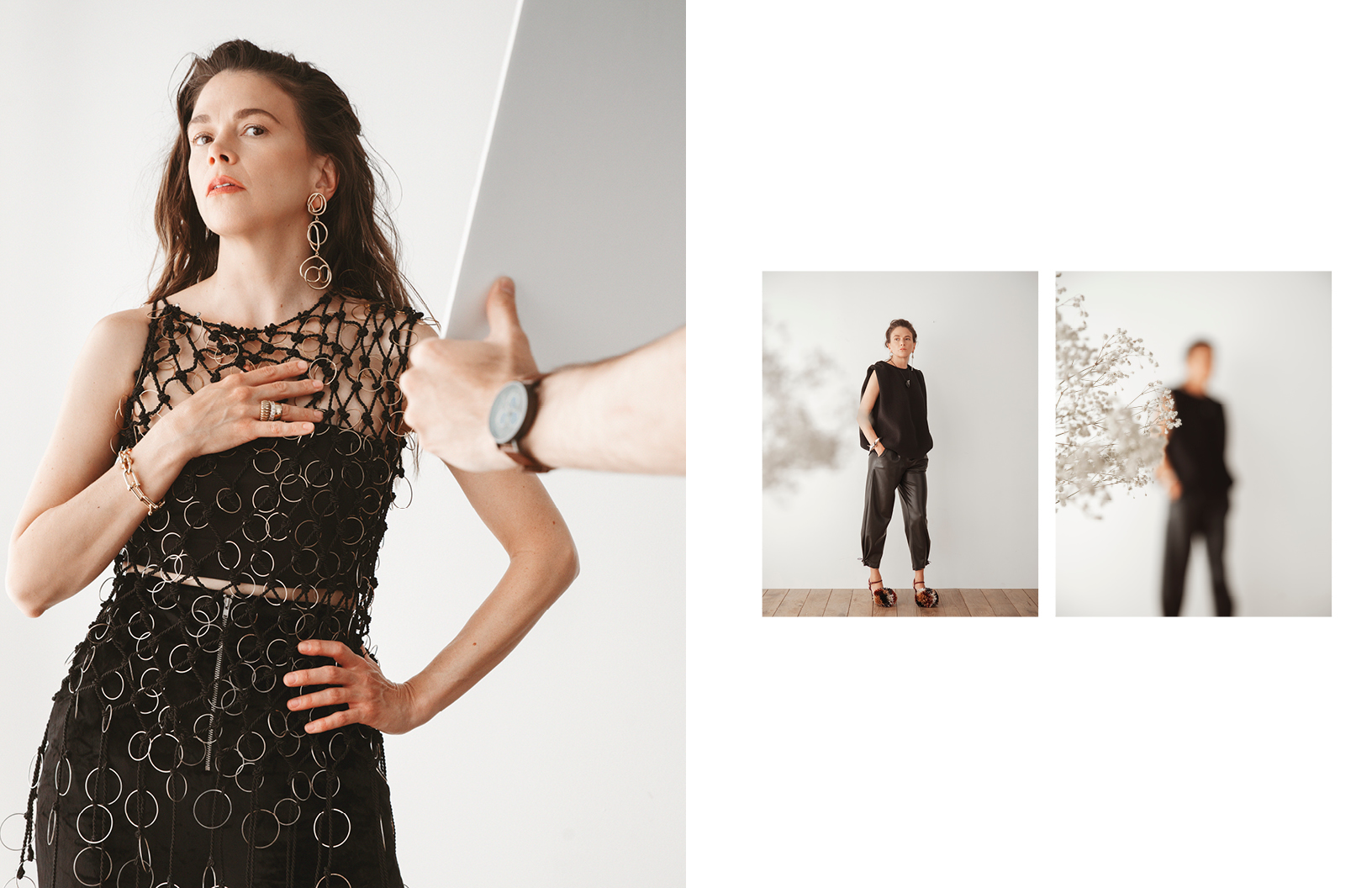 After eight months of bunkering down in the countryside with her family, and many, many crafts and home-cooked meals later, Foster is slated to make a grand return to the stage — in the London Barbican’s Anything Goes, followed by Broadway’s revival of The Music Man, where she’ll be starring alongside Hugh Jackman in the winter of 2022. Theatre lovers are no doubt clamouring to fill up the aisles now that shows are back on, but the lifelong performer is still having a pinch-me moment. “I never in a million years thought that what I did for a living would just evaporate,” she recalls. “Like, that never occurred to me. What we do as performers, especially in theatre, requires thousands of people to gather, and then all of a sudden that became impossible.”

The animation in her voice is palpable when she discusses being back on stage: “I don’t think I’ll ever take for granted being on a stage again. I think I’ll probably burst into tears the first time we have an audience. Even the first time we’re all together in the rehearsal room.” She acknowledges that rather than a resumption of theatre, this is a new beginning: “So much has changed… it’s not Broadway’s coming back,” Foster muses. “It’s like Broadway’s moving forward. And I want to be part of all of that.” If you haven’t noticed thus far, reinvention has sort of been a central theme here, and if there’s any take away from Younger, our conversation with Sutton, or the past year and a half, it’s that it’s never too late to make a change, take a risk — and maybe pick up some new crafts along the way. 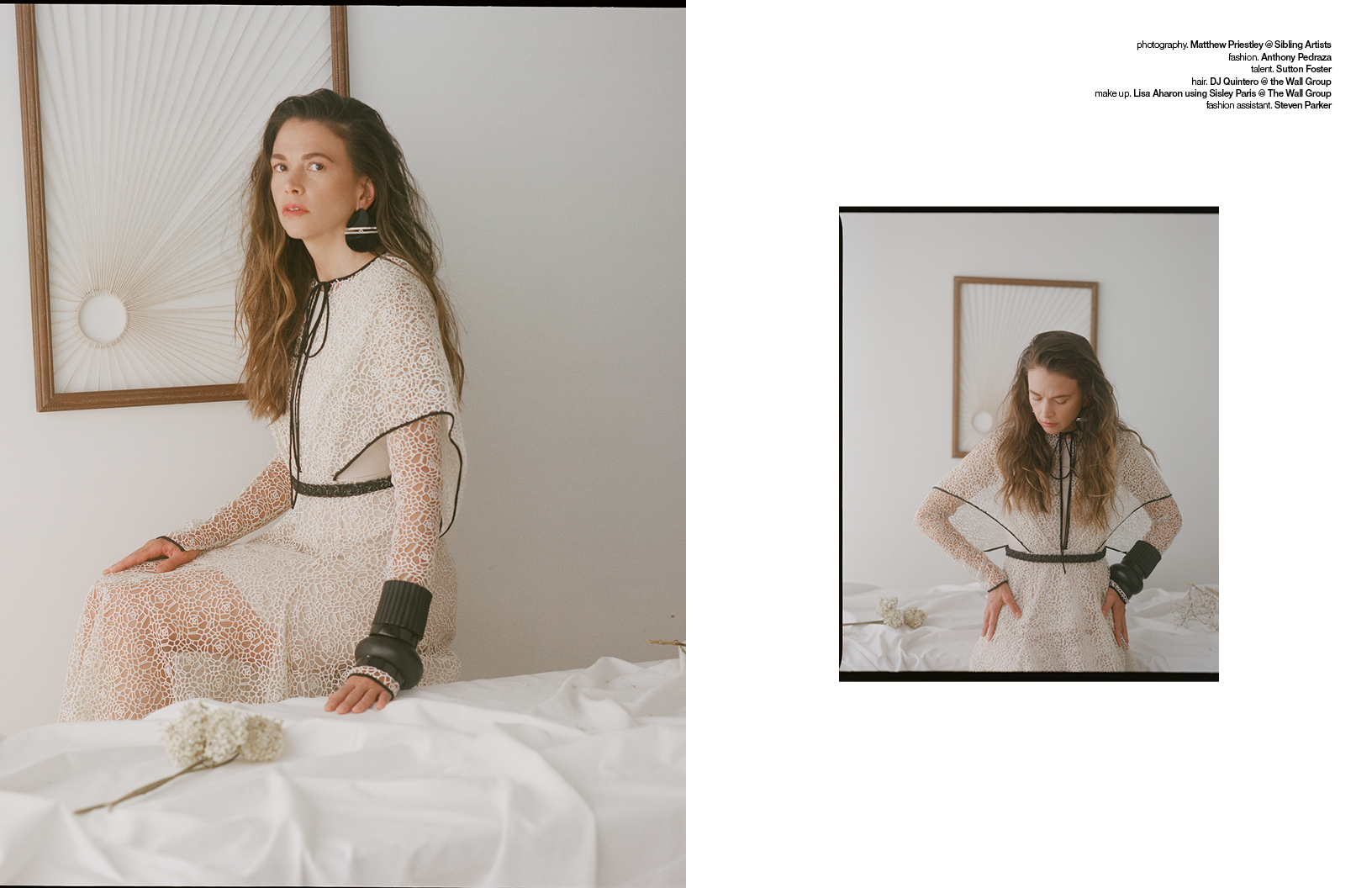 The final season of Younger is out now.
Anything Goes is now playing at London’s Barbican Theatre.
Hooked: How Crafting Saved My Life will be released 12 October.