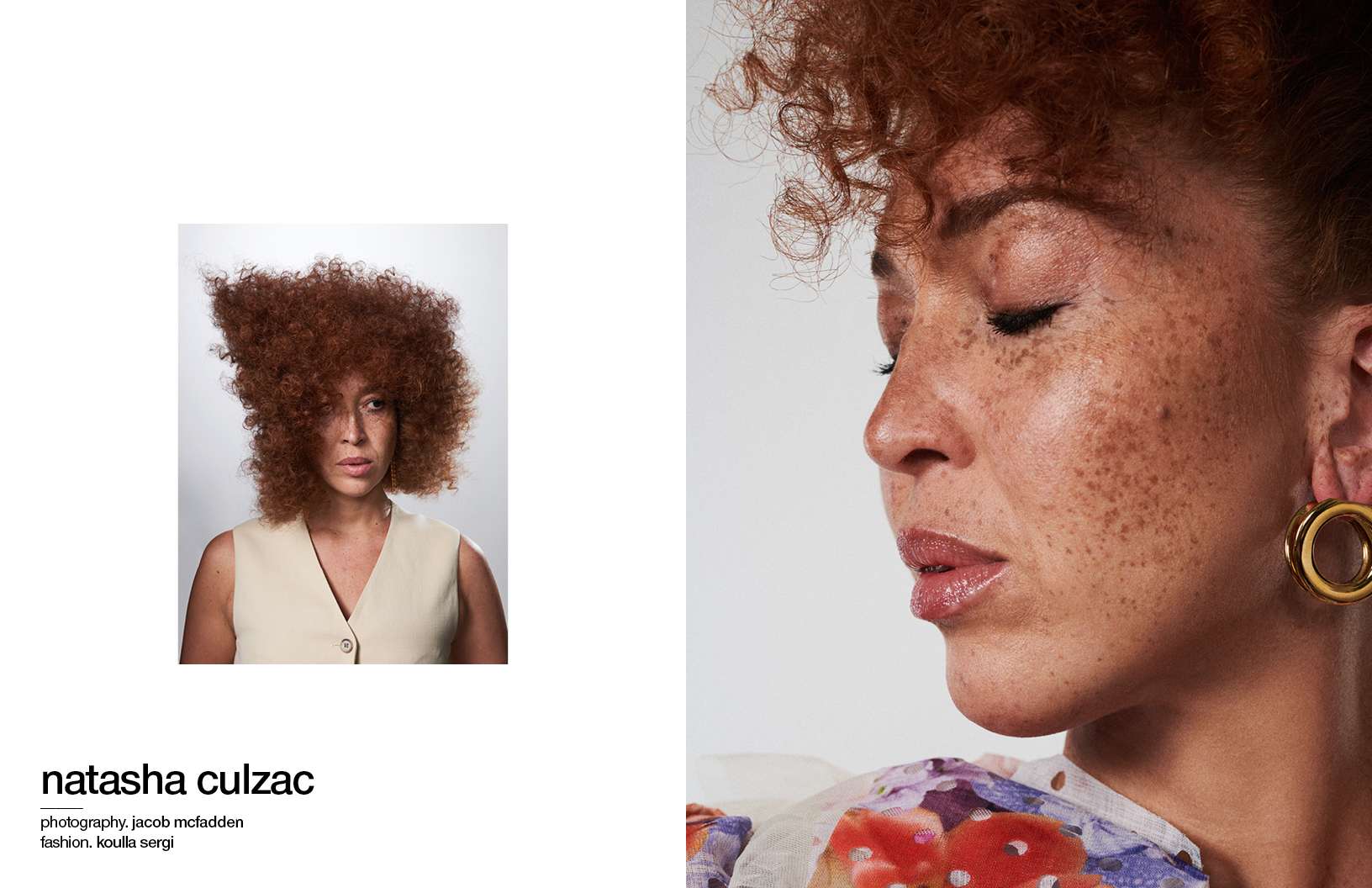 From a warring ringworld lightyears away comes Natasha Culzac, a journalist-turned-actress of English and Caribbean descent. Playing the fierce Spartan warrior Riz-028 in the video game-inspired and gripping dystopian series Halo, she shares an intergalactic set with stars Pablo Schreiber, Natascha McElhone and Olive Gray. The dynamic role comes after 5 years of slaying it in the fantasy and sci-fi genre, and sits alongside parts in Men In Black International, The Witcher and Cursed, among others. Join Schön! as we talk to Culzac about her acting journey, getting into character and what it’s like to fight in Halo’s electric CGI universe wearing bulky armour and brandishing neon plasma rifles.

You were a journalist before becoming an actress. What motivated the switch and have you always been drawn to performing?

I’d loved performing from childhood and throughout school, but back in ye olde days of 2003 when I was looking at universities, drama school fees weren’t loaned by the Student Loans Company. Something about it not being a serious career?! You had to self-fund it with cash upfront, and despite fees being comparatively cheap back then, my family didn’t have that sort of money. I think subconsciously it made me see acting as ‘not for the likes of me’, and I promptly stuffed the dream into a locked box. Rightfully, the Government changed its position on that. But anyway, I also enjoyed writing, and particularly current affairs, so journalism sort of became my other dream. It felt more tangible, more realistic.

And I did love it; I had some incredible paid work experience placements and wrote for some huge publications, but there was just always that nagging feeling in the back of my head that was disappointed I still hadn’t given the other thing at least a go. I ended up becoming an online news reporter, loving the buzz of a newsroom but was just generally unfulfilled. Throughout my life people had told me to model, and in my self-conscious late teens/early 20s I did try, desperate for acceptance. However, the industry wasn’t accepting for some years to come. So in 2014, while at The Independent, I joined a couple of modelling agencies as you do, this time wanting it for the money [laughs].

I left journalism and simultaneously went to work in marketing for a homelessness charity called Single Homeless Project, where I worked for about 18 months. I think I wanted to give back, make more of an impact; something that I wanted from journalism but didn’t see materialising any time soon. I did modelling on the side and didn’t particularly think it would actually lead anywhere, but it did and I was extremely lucky to bag a couple of jobs that helped claw me out of major credit card and overdraft debt. It didn’t clear the whole debt but that first big job, a campaign for Esprit, also finally gave me some disposable income to put towards part-time acting lessons — something I couldn’t previously afford because I was living week-to-week under a cloud of bank debt. I was 30. I don’t come from money so I should be better at saving and being careful with it, something in my 35 years I haven’t quite learned to do yet [laughs]. Sorry for the dissertation!

Your new series Halo is based on the hit military sci-fi video game of the same name. Have you ever been a video gamer or sci-fi fan? Was it daunting being in a series with a huge gaming fan base?

I had a chipped Playstation as an early teen and played Tom & Jerry religiously, and Crash Bandicoot, stuff like that. But it didn’t translate into my late teens. I think I discovered boozing and got waylaid. I’m seriously obsessed with Minesweeper though but I doubt that counts? [laughs] I’ve always loved sci-fi films and TV, though, ever since I was a child watching Quantum Leap with my dad. Star Trek was big in our household too. It’s just great escapism. It was/is daunting being in a series with such a huge, dedicated fan base. Obviously I want them to love the show, and I want to do them proud. 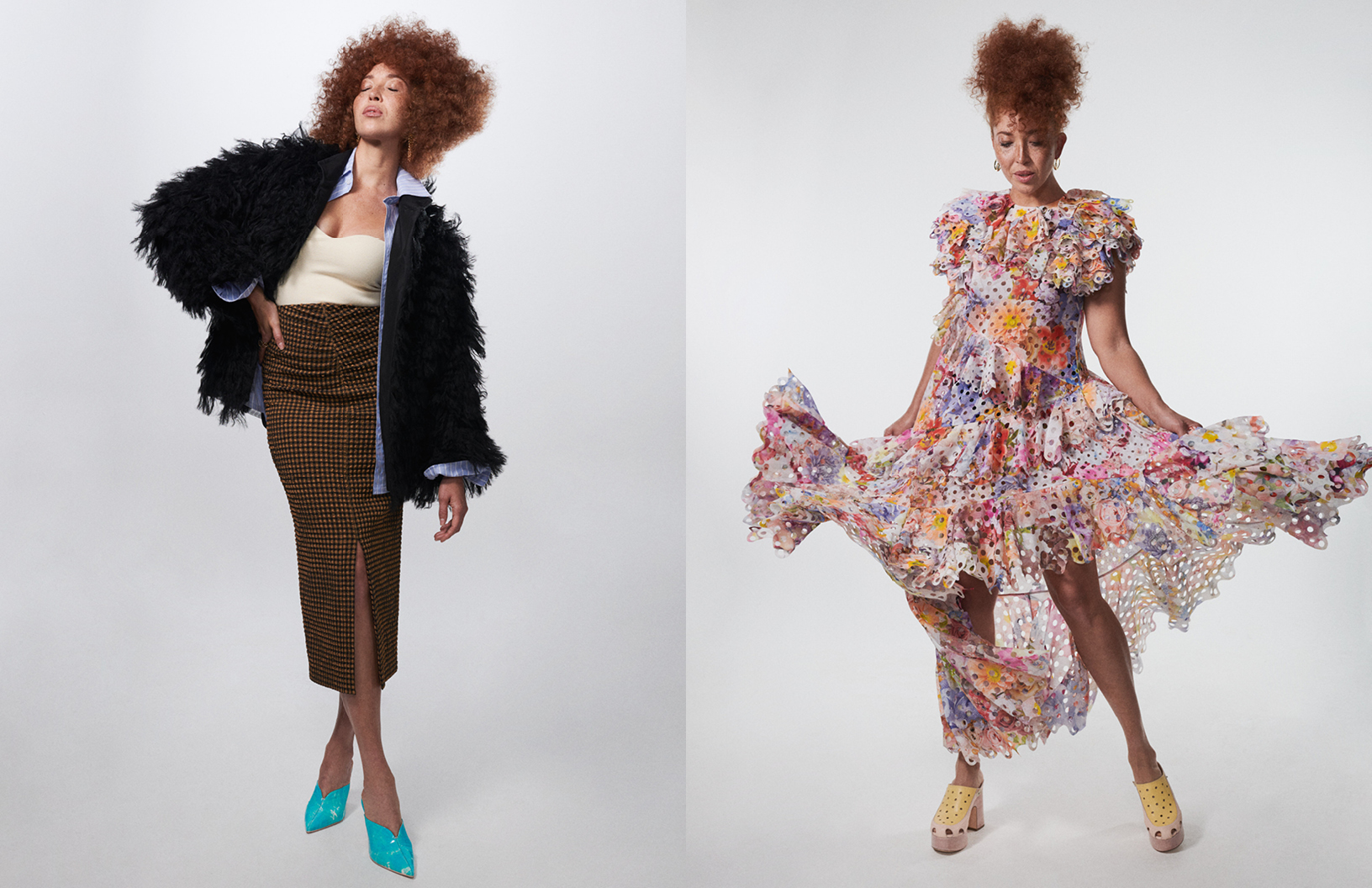 What was it like navigating special effects and interacting with virtual characters? Did it take some getting used to?

It’s actually weird how quickly you get used to that stuff. It feels bizarre at first to be talking to a dot [laughs], but you just have to throw yourself into it 100% because if you have any trepidation of looking silly it will actually, ironically, make you look silly. You have to commit.

Riz-028 is a deadly military soldier required to operate artillery and do one-to-one combat. How did you prepare and train for the role?

Right. So before I got Halo, I have to admit I was pretty unfit. I used to regulate my size with food and all the guilt that brings, bla bla bla. I could barely run a bath, let alone a 5k. In fact, I would go so far as to say I truly detested exercise. Not only the gruelling, punishing act of it but also the culture around it. It all felt a bit ‘holier than thou’. When I got The Witcher in 2018, I decided to at least put 10% more effort into getting fit because I knew I had a fight sequence. But you join the gym, you don’t really know what you’re doing, the weight section is overwhelming, you think you’re gonna be laughed out of the place. So when The Witcher filming ended, so did my minor interest in fitness [laughs].

But when I got the call in 2019 from Otto Bathurst, executive producer on Halo, to offer me the role of Riz, he said it was going to be tough, really physically demanding, and [asked if] was ok with that. He wanted to know I could rise to it. Of course I was like, ‘take my blood, I’m ready for anything.’ And then I thought… ‘fuck’. There was no excuse now — I had to throw myself into this world I’d shunned for so long.

I think the fear of being shit drove me to really push myself. I immediately got a PT and started doing all sorts of classes. In the August before filming we were given a Spartan trainer who did a lot of Crossfit-esque stuff with us, and the training for the show then didn’t stop until we wrapped in June 2021. In Budapest during filming, we were training 5-6 days a week, and during multiple lockdowns, trained virtually at home. All of this was not only to give us the physicality of supersoldiers but also, as actors, to actually be able to handle the 35kg, bulky costume. That’s nearly half my own bodyweight.

In terms of the military aspect, I did a performer’s firearms course in 2019 before we started with some great ex-military guys who train actors to use weapons properly. Once in the show we had boot camps, sessions with our military advisor Dan Hirst, drills, were sent videos and materials to look at, research to go off and do on our own, playing Halo, watching cutscenes from Halo. The game obviously has its own weaponry and its own way of doing things. Also the fighting needs not only to be accurate, but also interesting because you’re making entertainment. There was a lot to take on board!

You mentioned the bulky battle uniforms. How did you get used to them?

I can’t even begin to tell you how mad the costume was. I really like practical effects and practical costumes, but the armour did take a while to get used to. The beginning of the shoot was quite rough. The costume is extremely uncomfortable. It’s tight, hot, and heavy. You don’t have a lot of mobility. Everything hurts, particularly after wearing the thing for 12 hours [laughs]. But somewhere along the line we kinda, dare I say it, got used to it? Muscle memory must play a huge part, plus as our training continued, maybe we became stronger? Also, while I sit here and describe how demanding that costume was, the cast’s experience was nothing compared to our stunt doubles. There was sometimes a crossover where we’d do some of our own running and fighting, but the main bulk of the action was given to the stunts, and they did such a phenomenal job of making the Spartans look strong and capable while doing crazy stunt sequences in often humid conditions. Riz’s stunt doubles were the utterly amazing Aurelia Agel and Eniko Fulop, who were so hardcore and incredible at their jobs. 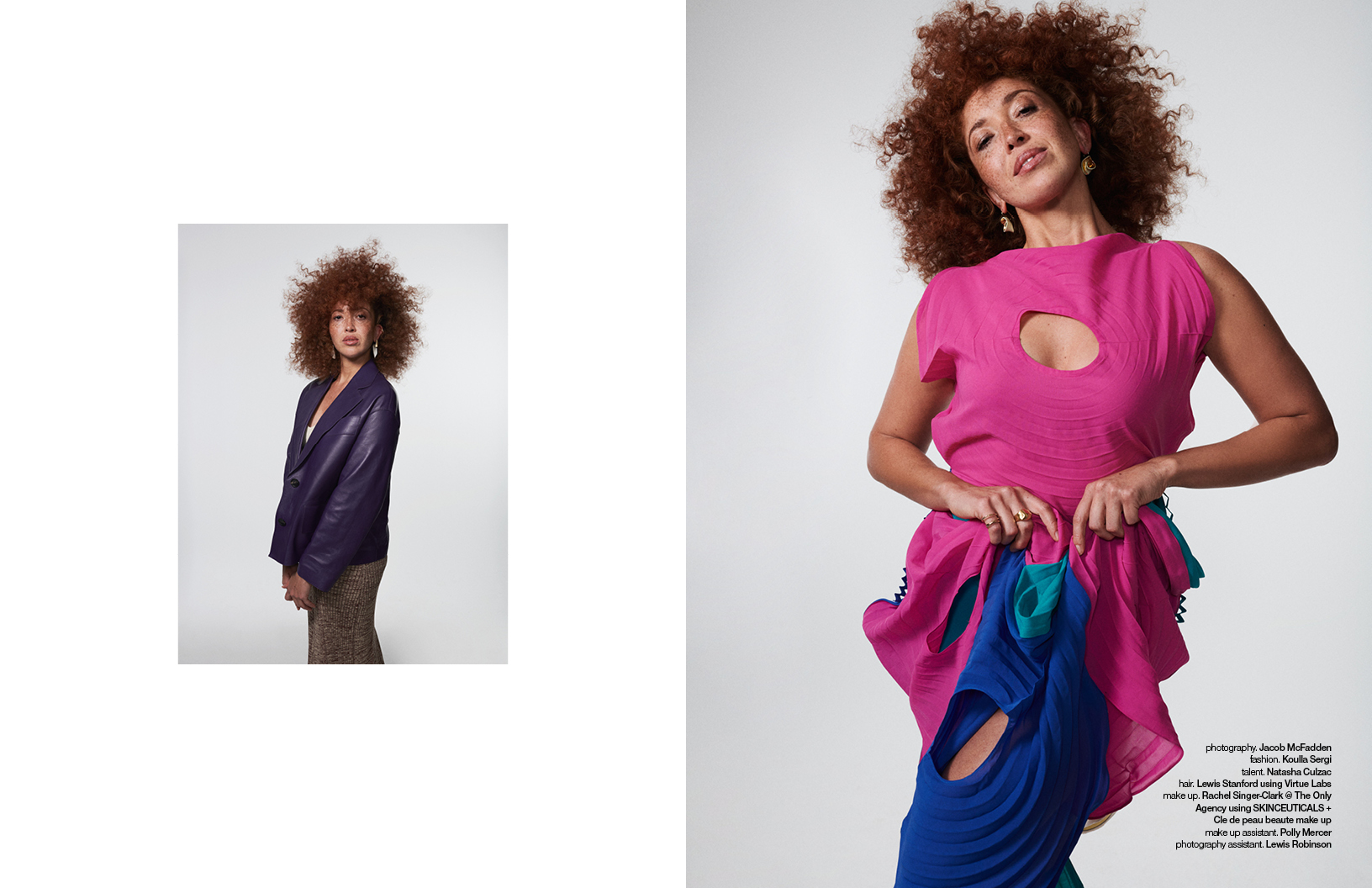 You’ve also appeared in The Witcher, another series based on a video game. Why do you think video games make such great fodder for television?

Your first foray into sci-fi was in 2019 with Men In Black International. How does your experience acting in a series compare to a major Hollywood production?

Ooooh I was — nay AM — still a BIG Men In Black fan. That first film I watched on loop as a kid. I still listen to the title song [laughs]. In the latest instalment I play a waitress with no lines — blink and you miss — but bloody hell I LOVED it. Apart from the bit where my champagne flute became unstuck and drenched Chris Hemsworth. Mortifying doesn’t cover it. It was my first professional acting gig outside of short films, fringe theatre, etc. It was a big set with about 300 dancing extras, but luckily I’d done a lot of extra work before on huge sets in London so I at least understood the mechanics of it. Had I not done extra work on similar sets I think I would have shat myself. The Halo production, whilst TV and not film, was often just as big in scope and design though.

You’ve fought in distant galaxies, on spaceships and middle earth. Where would you next like to be transported to?

Wouldn’t mind a week filming in Cuba or summat!

Are there any other genres or film styles you’d like to explore in the future?

Yeah, so I’m a big period drama fan. I don’t know what it is, maybe the romance of it, the escapism again, the history. I just love them, and I’d love to be able to get a chance to be a significant role in one. I grew up in Hastings, which is full of period architecture. It was a Victorian seaside resort, and so much of that time can still be seen and experienced. I’ve also been writing a couple of period pieces for film and theatre, not for me to be in, but just because I love it so much.

If your next project was based on a fantasy or sci-fi novel or game, what would you like it to be, and who would you play?

I’d love to be in something like Dark Matter by Blake Crouch, or H. G. Wells’ The Time Machine. A gritty, dark exploration into time, space, the multiverse, the pointlessness or not of life. The ending of The Time Machine still haunts me to this day. I do get regular existential crises [laughs] — ‘WHAT DOES IT ALL MEAN?’ I’d just love to dive into that realm. Anything dystopian in modern day also gets my vote.

Are there any other future projects that you can tell us about?

I’m in an episode of a crime/cop drama on BBC called London Kills. It’s in Series 3, but I’m not sure when that’s out, sometime later this year.

Halo is currently streaming on Paramount Plus.