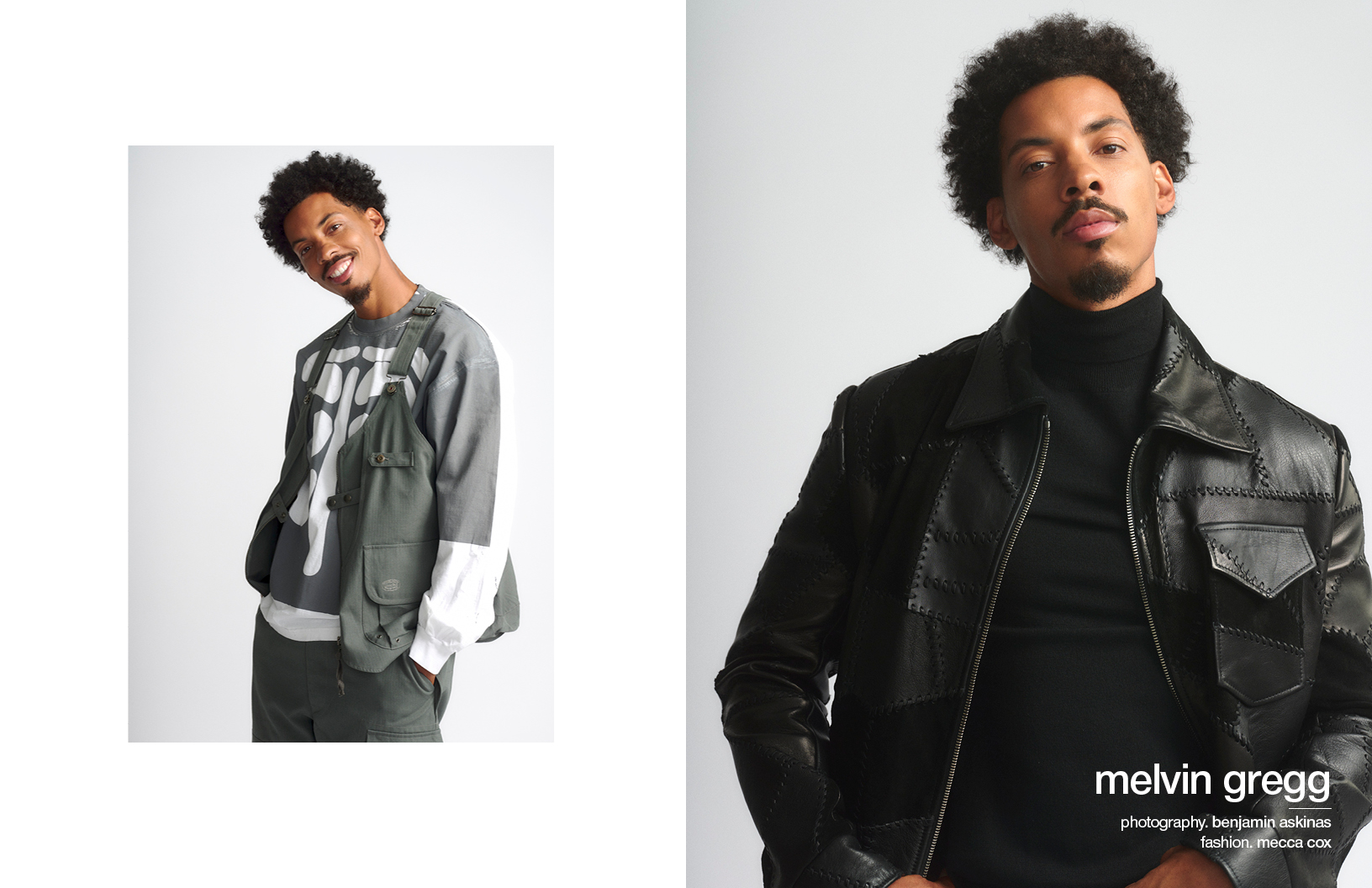 Melvin Gregg is an all-around talent, and with his recently acclaimed performance in Hulu’s Nine Perfect Strangers, his star is sure to only shine brighter. The 33-year-old American actor, model and comedian is known for projects like Snowfall, High Flying Bird, The Way Back and American Vandal. His latest Hulu series follows a group of nine strangers who are called to a ten day retreat at a boutique health and wellness resort. Gregg plays Ben, a former catering truck driver turned lottery winner, alongside his wife, played by Samara Weaving. Schön! caught up with Gregg to talk about the series, fatherhood and more.

Your character Ben Chandler is a former catering truck driver who becomes a lottery winner. What drew you to this character, and what was your favourite thing about playing him?

What drew me to Ben was an opportunity to work with a counterpart, to portray a character dependent on another, something I’ve never really experienced with any of my previous characters. That was also my favourite thing about playing Ben, his interaction with his wife. When building Ben, everything revolved around Samara’s character Jessica.

We developed a backstory, a lot in which we pulled from the book. We got to know one another of course, but like I said, developing Ben revolved around Jessica for me. There wasn’t a lot in the script about who Ben was besides winning the lottery and working the catering truck; everything else revolved around his relationship, so that’s where I had to pull from.

How do you think the wardrobe reflects Ben’s “new money” status? Was it what you were expecting?

This was something I specifically asked for; the initial wardrobe choices didn’t reflect new money, in my opinion. New money typically translates to more flashy clothes, jewellery and big brands. If you’ve never had money and suddenly come into money you want people to notice, you want the things you could never afford before. Ben doesn’t care enough to really go all out and be as fashionable as Jessica. However, the pieces he does have are loud.

You worked with a lot of talented actors on this project: Nicole Kidman, Samara Weaving and Melissa McCarthy to name a few. How was that? Were you particularly close with or inspired by any of them?

Yes, I had an opportunity to work with some great actors. It was great to be able to watch their processes and just soak it all in. They were all great and welcoming to any questions I had. Just making themselves available, very generous actors on set. 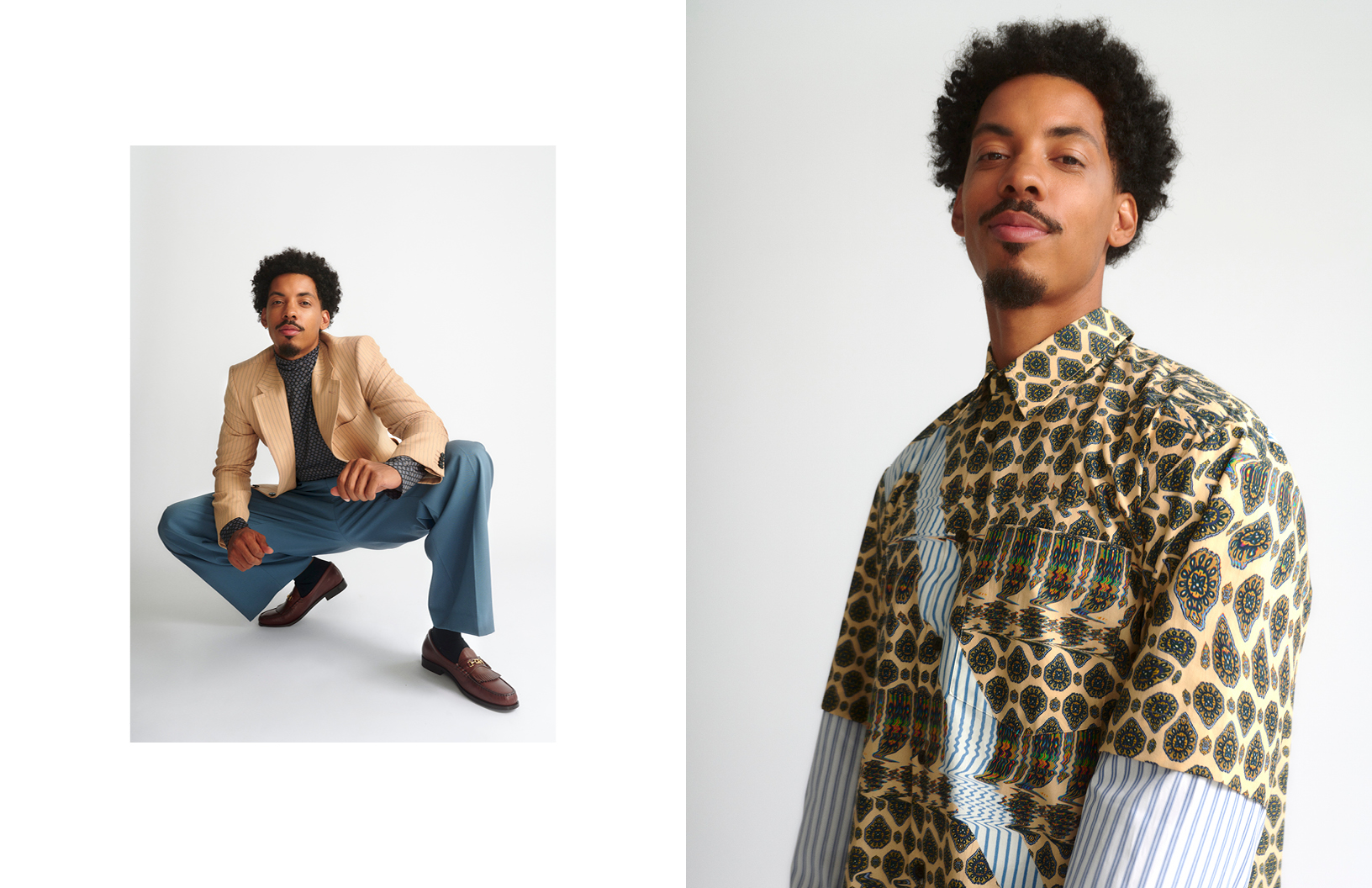 You mentioned your co-star Samara Weaving. What was it like working with her? How did you create chemistry on set?

It was great working with Sam. She’s the sweetest, very funny, an all around beautiful person. Her character was a little different — you can even say annoying — but it just speaks to her as an actress because Sam is a joy to be around, whereas her character Jessica, not so much [laughs]. This helped me build a “chemistry arc”; in the beginning I let Jessica annoy Ben by simply just reacting to her, but as the show went on Ben remembered what he loved about Jessica, what was underneath, and for that I used Sam. In my mind, Sam is who Jessica was before the money.

You worked with the brilliant director, Jonathan Levin — how did his directing style add to the atmosphere of Nine Perfect Strangers, both on-screen and off?

Jonathan Levin was great and very generous as well. He was open to suggestions. I don’t know how but he had a handle on each story line and was still able to pay close attention to minor details. He was easy going, which is what I love most with directors.

What is your biggest takeaway from making this project?

My biggest take away would be preparation! Prepare, prepare, and come to set ready to go. Being confident in your character and your choices, I learned that from watching a lot of the greats on the show. And to simply own your space.

Is there a genre that you would love to work in that you haven’t tried yet? Why?

Yes, I want to do a romantic comedy. I got a little taste of that in Nine Perfect Strangers which was one of the things that brought me to it, but not so much — so many other things were happening in the show that we really didn’t get a chance to dive deeper.

You became famous on the social media platform Vine, gaining 7 million followers. How do you feel about creating on social media now?

I feel like creating on social media is great; you get an opportunity to simply create and people get to see your work. As a creative, you’re able to get immediate feedback and use it to sharpen your skills. I also like being able to test your content against the audience and implement the notes you receive into future content. Immediate feedback leads to constant growth. You can develop your skills really fast if you focus and work hard. You get an opportunity for people all over the world to see you work while amassing a large audience, which becomes valuable, in turn making you more valuable as a talent. 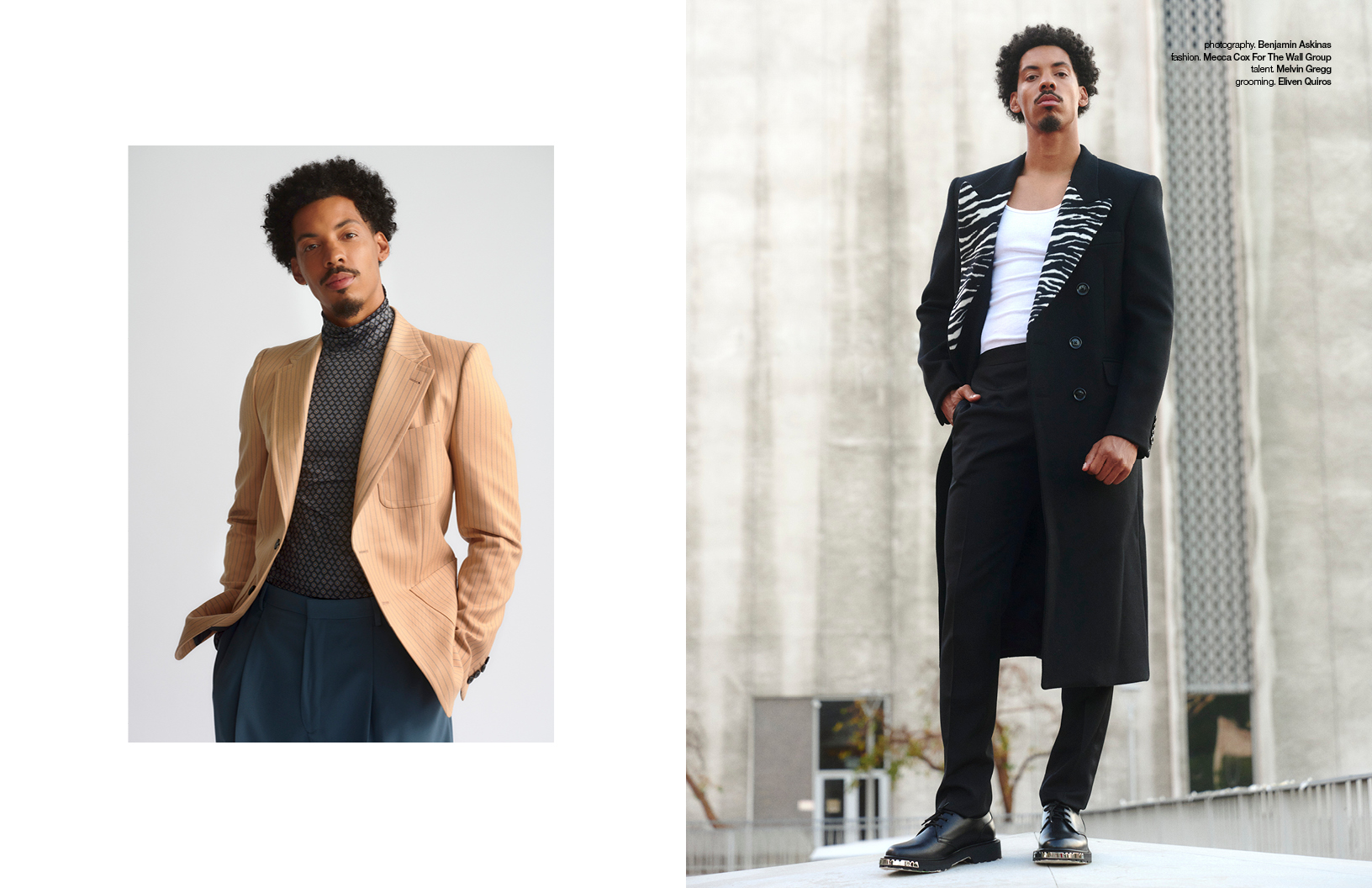 Your Instagram caption reads “control your narrative.” What does this mean to you, and how do you manage to stay true to yourself and not get lost in other peoples’ perceptions of you?

Yes. You have to control your narrative. If you let other people control your narrative, it’s no telling where you may end up. You have to be conscious of yourself and everything around you. Protect your brand, protect your space, protect your personal life. As far as how I control my narrative and avoid getting caught up in people’s perception, I have a family. I spend the majority of my time — 90% of my time — with my family. That keeps me grounded. I don’t know what the world’s perspective of me is. I really don’t go out much. I’ve yet to be recognised for Nine Perfect Strangers and it’s a huge show. That just shows how little out and about I am, so I don’t give myself an opportunity to become lost in the perception.

Speaking of family, you recently became a father. Congratulations! What is your favourite thing about it? How do you manage to combine fatherhood with your career?

My favourite thing about being a father is my son. I mean, he is perfect. Every day is a different challenge; there’s something new every day. He’s growing and he’s super active, he falls, and he gets up. He learns what not to do. It’s a constant evolution and it happens so fast. Balance is everything — I’m a man first, a father second and an actor third. I try to keep normal work hours, allotting time for myself, my family and my work. I get the least amount of time but that’s fine [laughs].

You’ve achieved a lot in the past years. What’s the biggest lesson you’ve learned in this time?

What can we expect to see from you in the future? Any other upcoming projects?

I recently wrapped SpringHill’s House Party, the new House Party. I’m also currently developing projects of my own. The same process I executed within the digital space as far as writing, directing, and producing, I want to continue doing in the traditional space. It will take more time, but it’ll be worth it.