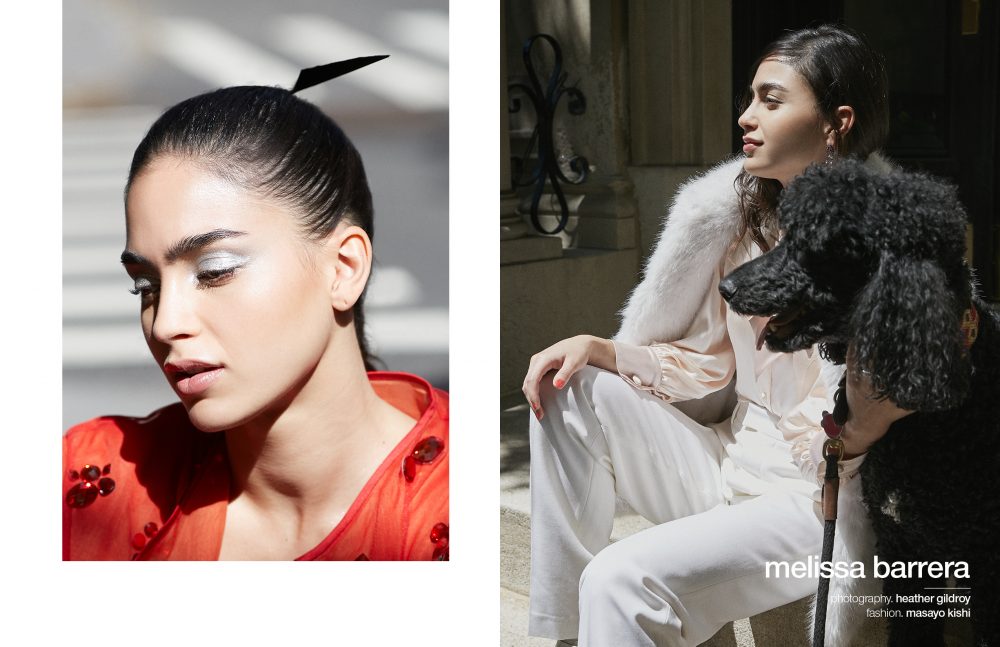 It should be commonplace but to have a show on TV where a Latinx family take centre stage is a breath of fresh air — add to that a queer storyline and you get Starz’s groundbreaking Vida. Since its premiere in 2018, Vida has been shattering stereotypes, breaking boundaries and making strides for representation with its heartwarming and impeccable comedy. And at the on-screen core of it all, it’s Melissa Barrera.

The 28-year-old Mexican actress portrays Lyn Hernandez in the show — one half of the protagonist sister-duo alongside Mishel Prada. Having started her venture in Mexican telenovelas, Vida has conclusively proven to be Barrera’s trampoline to global success. Next, she’ll take on leading roles in the highly anticipated musicals In the Heights and Carmen. As Vida’s second season makes its way to streaming platforms, we catch up with Barerra to talk about the series’ significance, her upcoming projects, and her thespian beginnings.

You have a musical theatre background. Did you ever envision you’d end up doing an American primetime cable show?

I don’t think I was as specific as to think Prime Cable. All I know is that while Broadway was my first dream I’ve always been the kind of person that wants to do everything, try everything. And even though I started working in Mexico, doing television, theatre and film, I definitely did envision myself working in the United States. It was a goal of mine to cross over to the English language market and continue to grow as an artist by challenging myself with more complex roles and stories.

As you mention, you started off in Mexican TV doing telenovelas. What do you feel the main difference between Mexican and American TV is? Was it a seamless transition for you?

People ask me this question all the time and my answer used to be “quality of the product.” I always thought it was just the fact that more money is invested in the development of content for entertainment and its production in the U.S. and therefore the end result tends to show it. There used to be a very clear distinction visually of a show or film made in the U.S. versus one in Mexico.

But I have to say that in the last years that gap has been getting smaller. Mexico is producing more and better content each year and that makes me very proud. Now I think that the only real difference is the lack of good scripts. The U.S. has fantastic writers that are incentivized to create and are valued for it. In Mexico, writers are undervalued and underpaid so the best ones flee to seek better opportunities. Of course, there are exceptions but that is what I can see now looking back.

As for my transition, coming from working in Mexico to the U.S. on a Latinx show with a primarily Latinx crew and creative team made for the smoothest transition ever. I was honestly shocked because, like a lot of actors from other countries, I had idealised Hollywood and thought everything was going to be very different —and better— but it wasn’t. It was all pretty much the same, just now I was acting in English!

Lyn’s story doesn’t necessarily mirror your experience —in fact, in terms of the language is quite the opposite— but do you find you share any similarities with her?

Lyn and I are very different in the way we live our lives. In fact, I would say that I have a lot more in common with the character of Emma. I am very focused, driven, very disciplined and organized. But when I read the script I definitely connected to Lyn more and I was surprised myself. I’ve found, now after two seasons that Lyn and I share that yearning to prove ourselves to the people that have doubted, and most importantly make our families proud of us. Everything I do, I do for my mom and my sisters. Lyn this season is desperately trying to make her sister proud of her and prove to her that she is capable and reliable. We also both adore our sisters and would do anything for them. 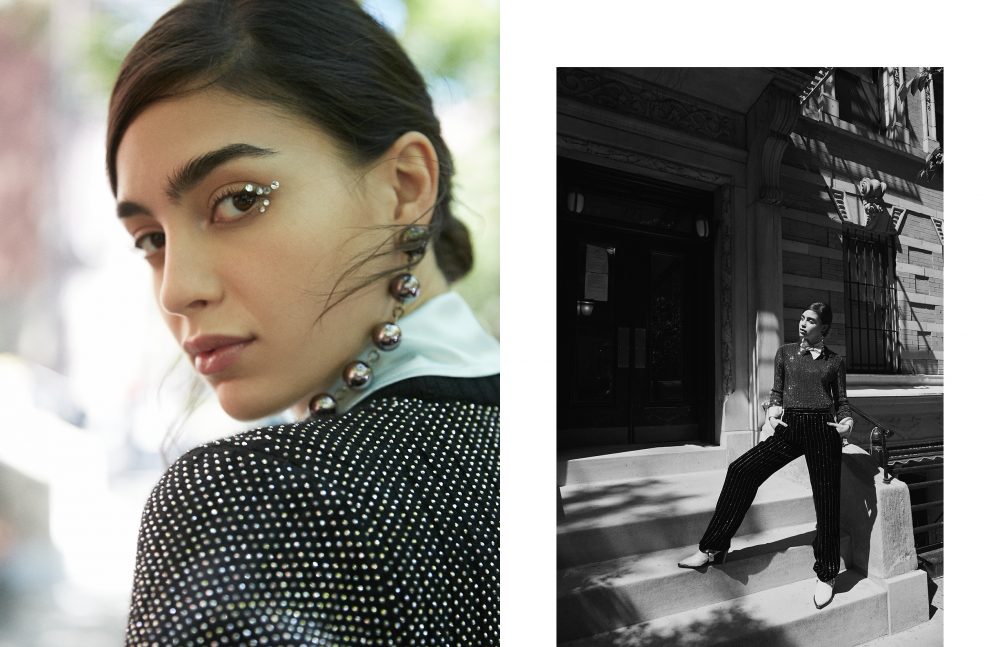 How did you prepare for the role for the first season versus the second?

[For] season one I did a lot of research. I spent days exploring Boyle Heights and talking to people from the neighbourhood, learning about their experiences. I also did my own character history homework to figure out Lyn’s life leading up to when the audience meets her in the pilot episode. Filling in gaps of her childhood, her teenage years, her dreams and ambitions.

For season two I just hoped and prayed to find Lyn inside me again. I did specific research for certain scenes —mostly the sex— but I trusted that she was there. And she was. I never want to overthink things. Overthinking as an actor can cause blocks in my experience, so I look at a scene and learn the dialogue, but then I forget it so I can be present and living in the moment. Playing a character over various seasons is a gift because you grow together. Lyn grows tremendously in season two and I grew with her as an artist. It’s hard to say yet who is becoming more like who [laughs].

Vida is one of the queer Latinx series making strides for representation as of late —even winning the GLAAD Media Award for Outstanding Comedy Series this year. How does it feel to be a part of it all?

It’s definitely an honour and it makes me very proud to be on a show that is doing so much to represent the LGBTQ+ community. They are a huge part of our show and to be recognized by them is amazing. The response and the support that the show has gotten feels surreal to me and I am so grateful!

The series touched on pivotal themes for the Latinx community, especially in America —from assimilation and gentrification— on top of universal ones —like grief and homophobia— in the first season alone. What can we expect from season two?

Season two continues to be bold and unapologetic, some of the bad seeds planted in season one are coming back to bite the sisters in the rear this season. We continue the conversation on gentrification and delve even deeper into GENTEfication.

The sisters being at the nucleus of the conversation as they try to rehab the bar and bring in the clientele to make them money. Grief also continues to be a big topic since season two picks up only a week after season one ended and the sisters and Eddy are still mourning the death of their mom, plus there’s another death that is the catalyst of a lot of events in the story… Something really important that we touch upon this season is the effects of constant dismissal and judgments made on a person and how we are strong enough to overcome them.

Why do you think it’s crucial to have a show like this in this day and age?

Because authentic representation matters. Because we need to show, through art, the humanity of a marginalized community. The opportunity to tell universal stories like ours, about family, about community and identity, is long overdue. Everyone deserves to be heard. And if while you’re telling your story you’re helping others be brave enough to share theirs while you’re entertaining and funny and sexy as hell… why not?

I know season two isn’t even out yet but is there any word on a third one?

Putting you your musical theatre background to the test, you’ll be playing Vanessa in Lin- Manuel Miranda’s upcoming movie adaptation of In the Heights. I understand you were a fan of the Broadway musical, how was your reaction when you got the part?

I wept. It was definitely one of the happiest moments of my life. I got the news, Lin Manuel facetimed me to tell me, and after I hung up I just sat on my couch, crying, I couldn’t move, I felt like my body was going to explode in the best way possible and at the same time I felt at peace and elated. Then I called my mom and my sister and continued to cry.

You’re currently in rehearsals. How’s is it going?

It’s incredible. We’ve been rehearsing a lot, sometimes eight hours a day, mostly dancing. Rehearsals get very emotional, there is just so much passion in the room and so much pride that we get to make this movie and raise and represent the Latinx community in such a celebratory way. It is going to be very epic! 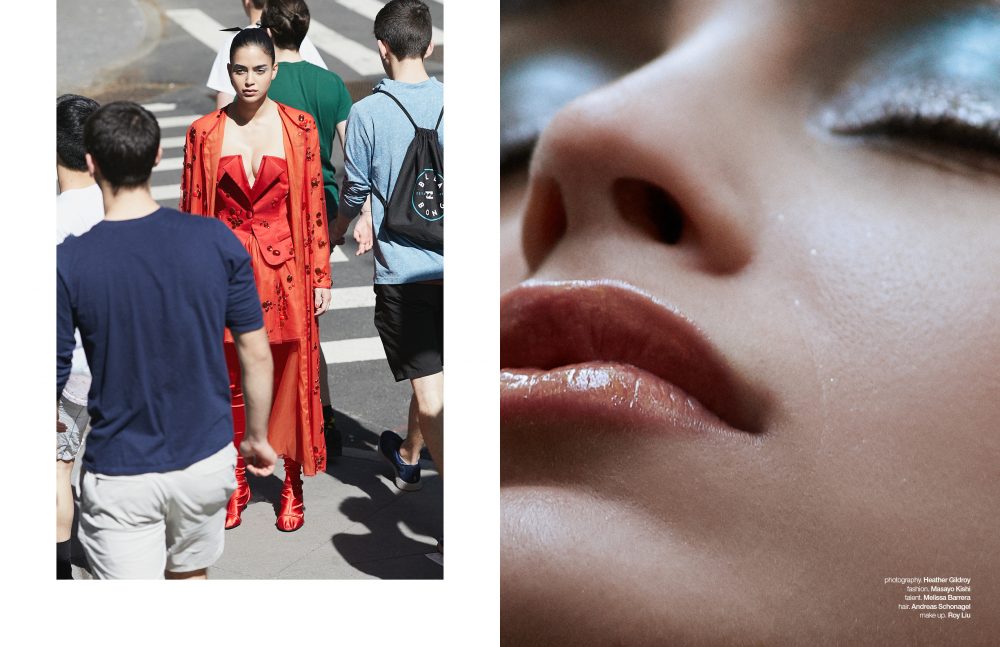 What do you feel makes this project stand out? What are you most excited for people to see?

It was the first Broadway musical I saw where I could clearly see myself playing a role. I think seeing it on the big screen, which is a way to make the story accessible to so many more people, is going to be revolutionary. It’s a predominantly Latinx cast, and just that fact makes it stand out. I am very excited for the world to see it because it’ll make our community proud and it’ll make the world fall in love. And we need more love in the world right now.

Continuing with more musical films, it’s just been announced you’ll play the lead in the upcoming film adaptation of Carmen. How do you hope to put a new spin on the well-known heroine? Do you feel the pressure?

I don’t because Benjamin Millipied has assembled the most badass creative team for this film and I feel so safe and too excited and grateful to feel anything else. The script that I read already was a very relevant reimagining of the classic and now Nilo Cruz, who won the Pulitzer Prize for Drama for Anna in the Tropics, is working on it so I could not ask for anything else. This film, with Benjamin’s vision, Nicholas Britell’s music and Nilo’s writing is going to be in a genre of its own and I still can’t believe I get to be a part of it.

Bizet’s Seville opera is indisputably one of the most famed worldwide — and there have been multiple iterations in the past. What do you hope this new contemporary reimagining will offer differently?

I don’t want to give too much away but this version of Carmen will give a new perspective on two stories that we’ve seen done a lot. Sometimes you need a little music and magic to get through to people and change their perspective on a complicated subject.

Looking back, is there anything you’re most proud of your career so far? Perhaps a role in particular that holds a special significance?

Every role that I’ve ever done has meant something to me and I still hold dear to my heart. Every role has led me to the next and then the next and I wouldn’t be here without each of them and what I learned from them.

Last but not least, looking forward, how do you hope to continue to break stereotypes with your performances?

By being more picky about the roles that I do and the stories that I chose to tell. That is a sure way to contribute to the change we need in the industry. I also want to start producing content. That’s another way to ensure that the stories that are being told about the Latinx community are the kind of representation we deserve.

Season 2 of ‘Vida’ is available to stream now on STARZ.