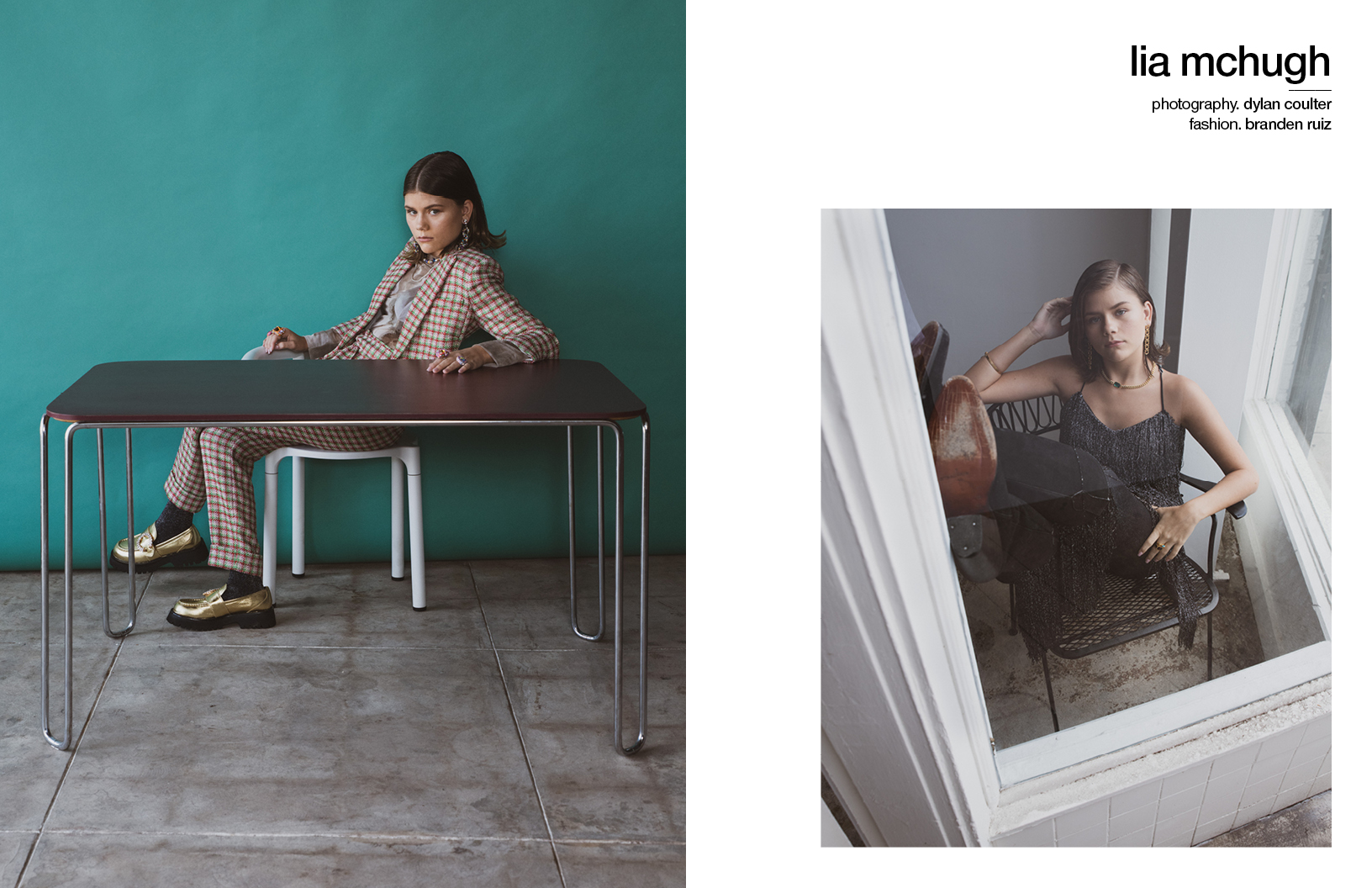 Pittsburgh, Pennsylvania-born actor Lia McHugh reserved her rightful space in the spotlight at just nine years old, snatching notable roles in films like The Lodge, Totem, Hot Summer Nights and now, the new Marvel Studios film Eternals. McHugh plays Sprite, a 7000-year-old cosmic being stuck in the body of a child — a very fitting role for someone as mature and poised as McHugh. The movie trails a race of immortal beings with superhuman powers who have secretly lived on Earth for thousands of years who reunite to fight a common enemy. Schön! sits with McHugh for an exclusive chat about the film.

First and foremost, how are you? What’s going on in the world of Lia McHugh right now?

I’m good! It’s been really crazy lately; so much has just been going on, lots of press, the premier… It’s kind of weird that the whole world’s going to see me.

I bet. For anyone who isn’t familiar with your character Sprite, how would you describe them, and what are some of your favourite qualities of your character?

Well, Sprite is 7,000 years old stuck in the body of a child. So you can imagine that brings a lot of struggles for someone who’s been a child for 7,000 years. I mean, I even feel stuck personally being a child, and I’m not even that old yet! But she struggles a lot throughout the movie, and she sort of masks it by being a bit of a cranky old lady — because she’s very old, but she’s also very intelligent, and she feels that no one really understands her. She can’t really showcase that because of the way she looks.

How did you embody that? How did you get into the mindset of a 7,000-year-old?

Well, I felt that I had a lot of similarities to Sprite even going into the part. I mean, I have been told a lot of my life that I’m very mature for my age. I’ve been working with adults since I was nine, and working on sets makes me think I grew up a lot faster. So, I felt that I was sort of able to understand feeling a lot older, being stuck looking young. [Director Chloé Zhao] also helped me a lot. 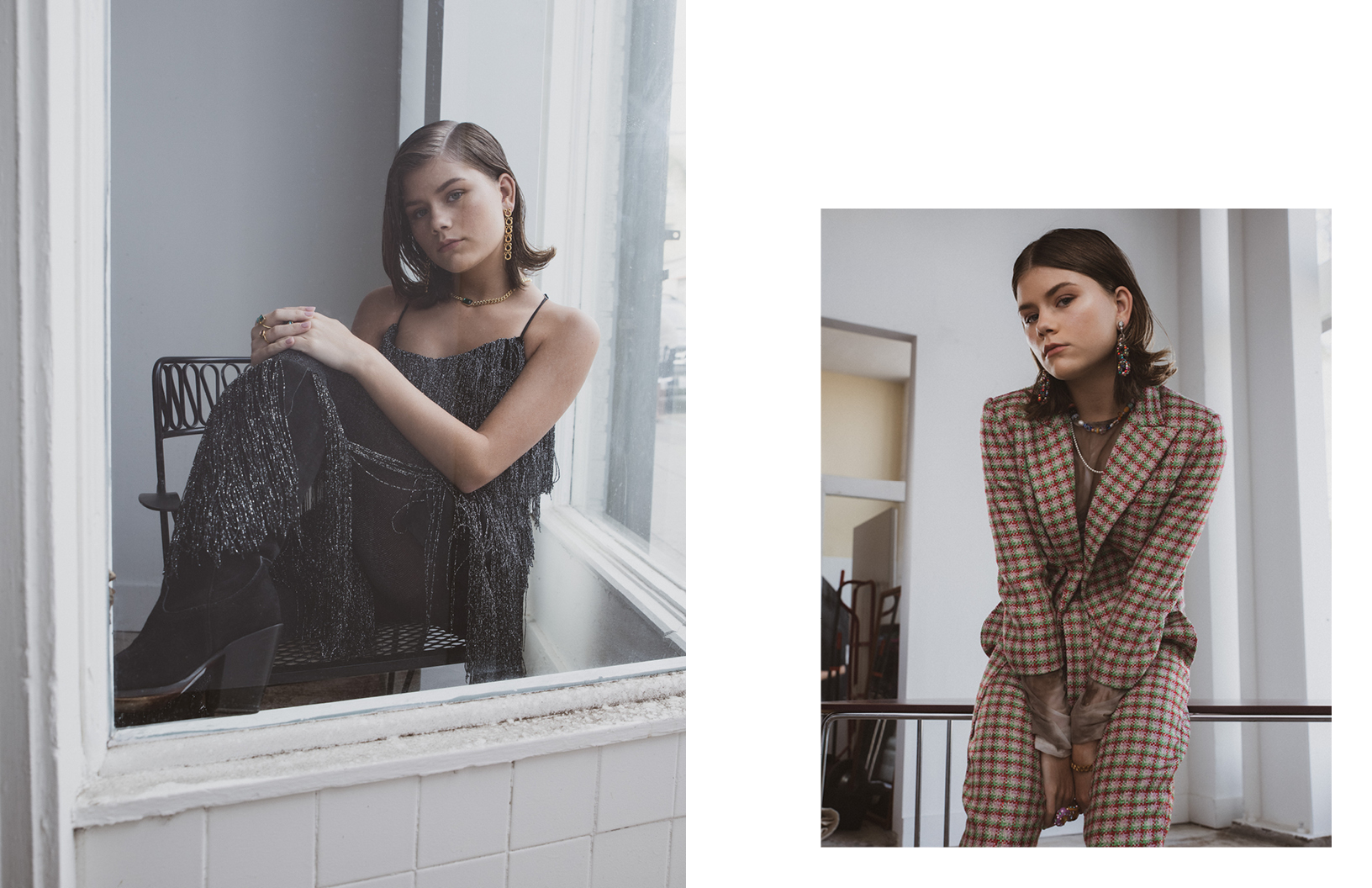 What really goes on in the mind of Sprite? What does she do when she’s not trying to save the world from evil forces?

Well, I think she feels sort of lost when she isn’t saving the world from evil forces because that is her purpose. When she’s not doing that, I think she deals with a lot of struggles, and she sort of feels miserable being stuck in this world that she doesn’t feel accepted in.

In terms of power and brute intelligence, how would you sort of compare this team of heroes to the Avengers?

I mean, these people have been together for way longer than the Avengers, so I think they are a lot more tight-knit, like a family type of thing. Families fight and they disagree and sometimes they don’t like each other, but in the end, they’re all family. I don’t know. I think our powers are really cool because they come from celestials, Gods, you know? We’ve got this cosmic energy. I’d say we’re cooler than the Avengers, but that’s just me.

I kind of asked this question earlier, but how did you mentally prepare for the role of a ‘hero’? What steps did you take to embody and accentuate that heroic energy?

I don’t know. I sort of just stepped in. At the beginning, I was so nervous that I just really had to pretend that I wasn’t and pretend that I was confident and hero-like, but as the movie went on, I think all ten of us were figuring it out as it was happening because we were all new to being superheroes. And I think that helped; we all sort of worked on understanding it as the movie went on and figured it out because not many people are used to playing a hero. 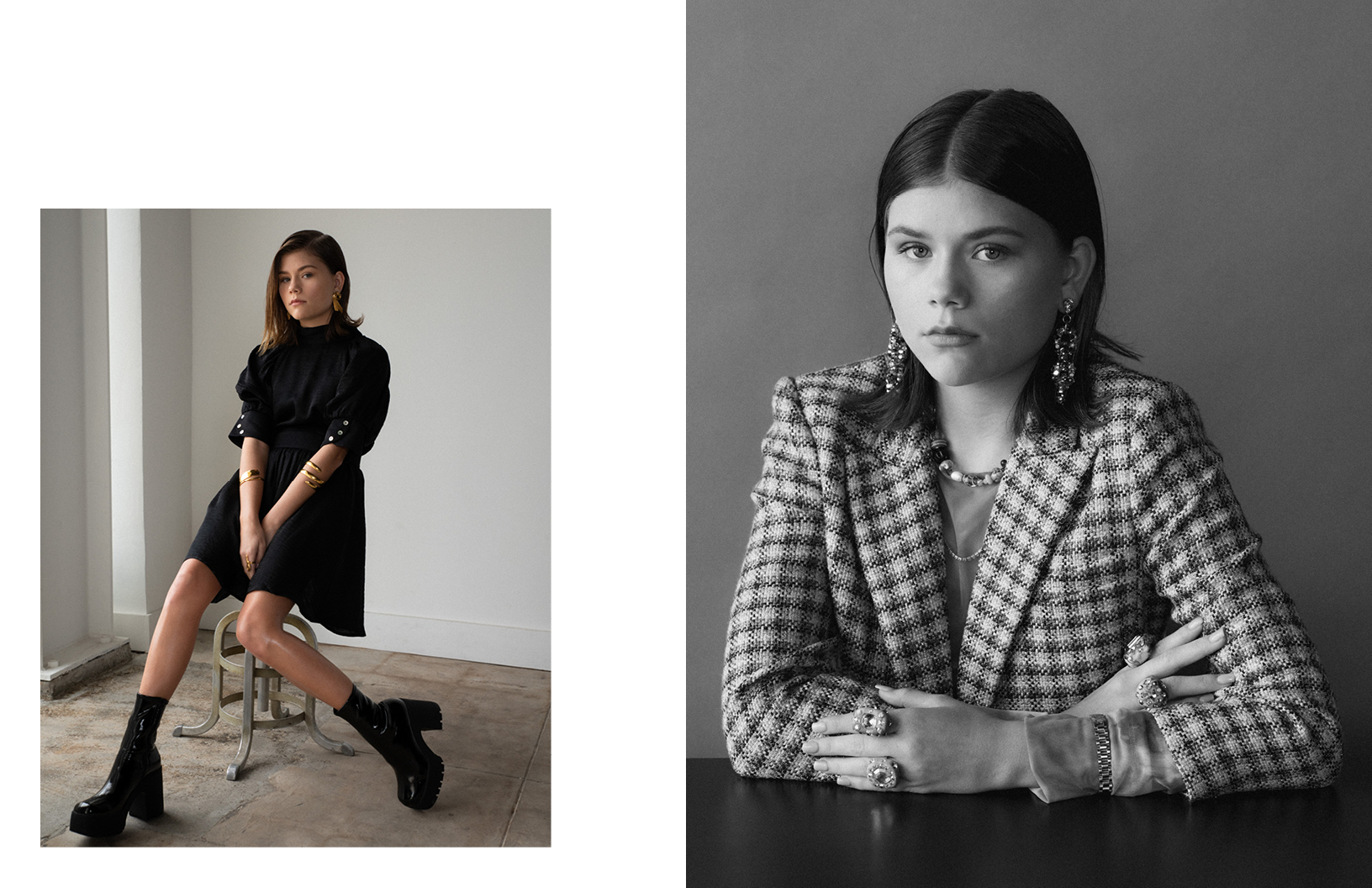 For being so young, you’ve starred in some pretty notable films, and now you’ve joined another all-star cast. What was it like on set? Were you more nervous or excited?

Going into the movie… [With] the all-star cast, I wasn’t as aware as I probably should have been about how famous some of these people were, so I probably wasn’t as nervous as I should’ve been — but coming onto a Marvel set was very daunting. I felt like I went from zero to a hundred in my career, and all of a sudden I was like at this extremely high level movie, working with these incredible people. Honestly, what went through my mind was just, ‘I can’t mess up.’

What kind of reaction do you hope viewers have to the film?

I hope everyone loves it. I love it. I think it’s totally different from any other Marvel movie, and I think that’s going to be really special for fans to see because of how different it is… I honestly am excited for people to sort of — like, when you watch a movie and you think about it, I think that’s something really special. I’ve heard this from a couple of people already, that they’ve been thinking about it and they’re trying to wrap their minds around it, and some people even like to go and watch it twice or three times. I think that would be really fun.

What would you say was one of the most memorable highlights during the filming process?

After the first week — I barely remember the first week because I was so nervous. Once it started getting into the swing of things, it was just so much fun for me. It felt like a vacation. I was in London filming on this incredible set — and honestly we all really liked each other. A lot of people went in as fans of each other… Everyone was excited to meet each other and really have this family bond. Chloé worked closely with all of us, so we were all ready to just jump in and become this family. I think the most special thing about this movie is the friends that I’ve taken away from it and the really cool relationships that I’ve built. You know, you really get to know someone over six months shooting ten-plus hours a day with them, which is really cool. But my favourite thing about filming is the people that I met and the memories I made. 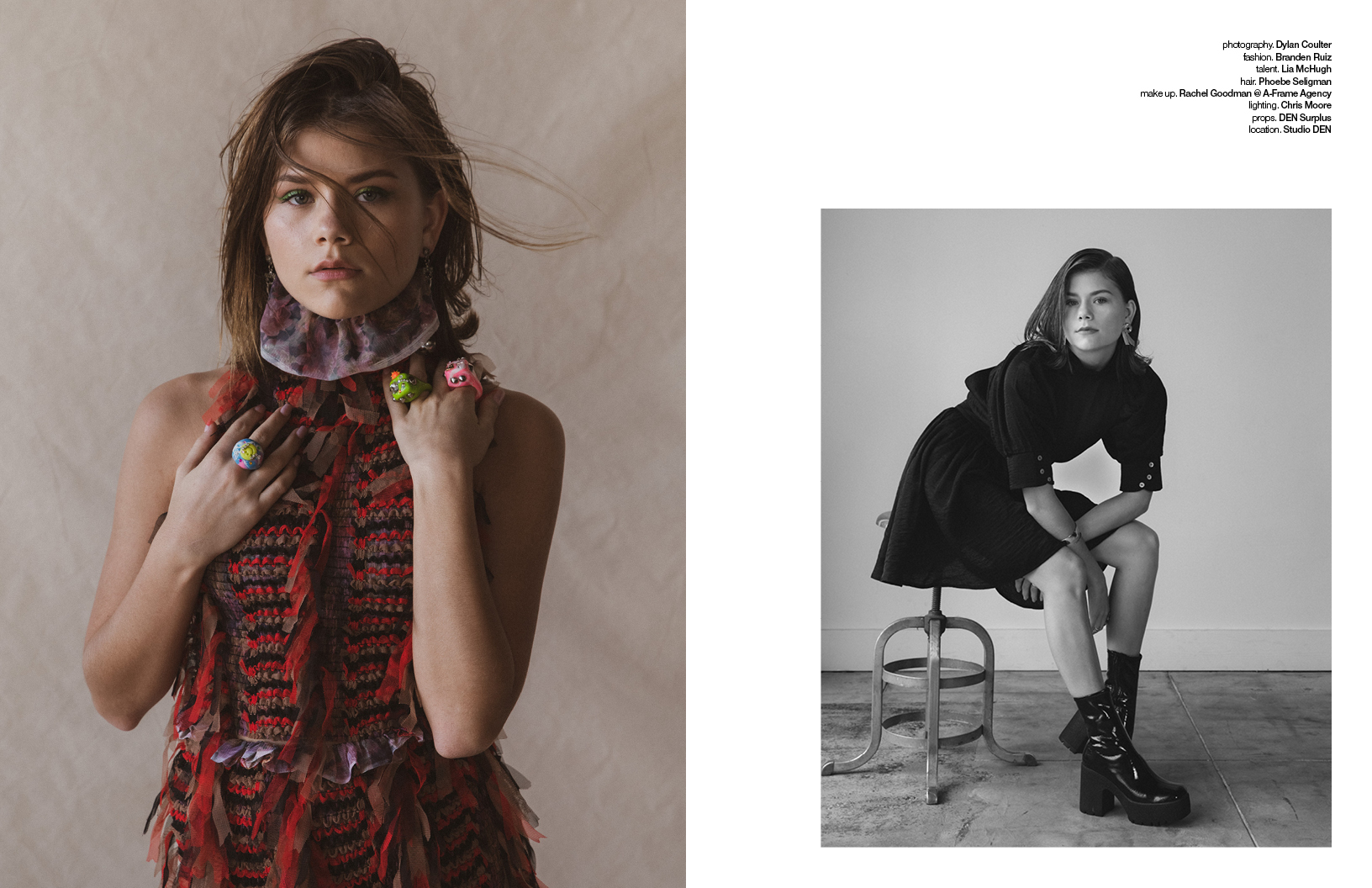 If you could have any superpower in real life, would you choose Sprite’s or something completely different?

Last question: what can we expect to see from you in the near future?

Well, I have some very exciting things in the works that I’m excited to share with anyone or with the world once I can. And pertaining to Marvel, they don’t tell me anything so I have no idea, but I would be very excited to hear of something else.

Eternals is currently in cinemas.