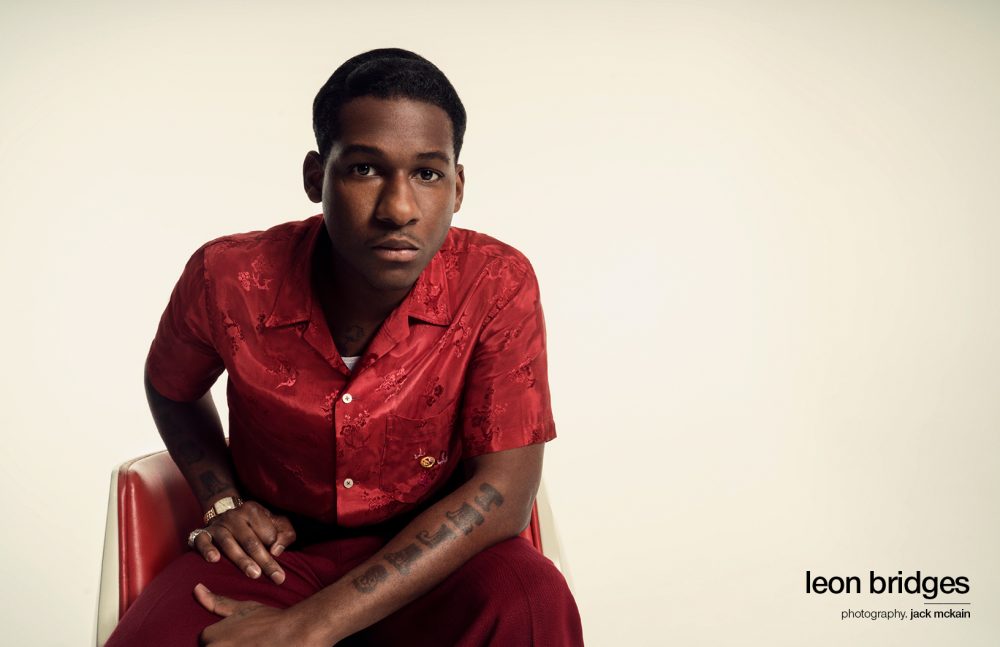 Leon Bridges is a man of few words, but with music as poignant and poised as his, few are more than enough. A musician with capital letters, Bridges‘ riffs and rhythms are infused with Texas flavour, the land that saw him grow, whilst offering tender thoughtful stories that draw him closer to his listeners. Mindful, melodic and timeless, Bridges’ sound gets lost in time: fusing retro Blues feels with contemporary R&B flows and a country touch. Hailing from Fort Worth, the city’s influence runs deep in the 28-year-old musician, who stands out for his heartfelt delivery and unique style.

After all, going from washing dishes to the White House in less than a year is a testament to his innate ability to evoke and inspire marvellously warm feelings solely through music. Sensual, playful and compelling, Bridges’ sophomore album, Good Thing, picks us from his debut with a sense of maturity and rawness. When we speak on a late May morning, he seems relaxed but excited about the future and the potential of his music. As he embarks on a world tour alongside the likes of Harry Styles and Masego, Bridges reflects upon his upbringing, his present and his future — all the while sharing who would be is dream collaborator and offering us the first taste of his new video for Beyond.

I’ve seen that you’ve been travelling a lot — you’ve been in Madrid, now you’re in London and tomorrow you are off to the U.S. again and then South America.

Yes — I’ve been moving around like a crazy person, but it’s all been good.

That’s good. So before we jump into the album and everything, I wanted to ask you about your name. Your name is Todd, right? So, why Leon Bridges?

Oh, yes. [Leon] was a nickname that people that I was going to school with gave me. There’s an actor named Leon, who’s played a lot of really cool roles in movies like Cool Runnings, and a lot of people would say I looked like him and so that’s where that came from.

Your original interest was dance. How did you shift from dance to music?

I was really big on dance. I was studying dance through college but while I was there I met some musicians who were really passionate about music — they would kind of get together every day and do jam sessions and I always knew I could sing, so I hopped in while they were doing their jam sessions and I started to, well, jam with them every day and that kind of inspired me transitioning into songwriting and playing guitar.

Do you still dance then?

Oh, yes, I still dance — mostly when I’m out at night but I definitely dance on stage as well, too, when I can.

Did you expect this success in any way? Because when whilst you were in Dallas and you were playing Sofar Sounds and all these intimate venues. How does it feel to now to be playing in national and international television and even the White House? Are you surprised by any of it still?

Yeah… It’s really a wild feeling, it’s very surreal. It doesn’t, it just doesn’t feel like reality. You know, just looking back on when I was grinding [and] doing open mics, I never had any ambition to make it on a big level and do TV. It’s crazy, having opportunities that a lot of my friends who are in the same business as me haven’t even had yet. [But] it is really amazing to do that kind of things.

It’s fate, I guess you could say. Since you released Coming Home and even before, you’ve evolved from neo-soul, R&B to traditional soul and now in Good Thing you mix it up a bit. How would you define your style in this album?

It was kind of a long process. I started recording and writing [this album] in 2016 and, in the beginning, a lot of those songs were still in the same vein of Coming Home. You know, I felt like that wasn’t enough for me — and so I started to write some more tunes and they were kind of reminiscent of the ‘80s and ‘90s vibe. [But] that was a little bit too far of a stretch— so I went out to L.A. and worked with this artist named Ricky Reed. Our goal was to find kind of a medium and bridge the gap from Coming Home [but at the same time] find something that was fresh and new. So, in the studio, we just we just wrote a whole bunch of tunes and that’s the album!

That’s great. How would you say you managed to bridge that gap?

It’s crazy [beacuse] when I look at the album, I see it and it really feels really different from my first album. But it’s cool to hear other people’s responses to it and they say that it’s really not too far from it. However, I think the important thing was writing lyrics that had meaning and that were very intentional, and that’s kind of the thing that worked with my first album. So it was about writing intentional lyrics but bringing it to a bigger level. It was about incorporating real instrumentation and a rawness quality to it and I think that’s why it worked.

For sure. So sonically and lyrically, what were your main influences when writing?

A lot of the stories are sort of about some of my experiences, but our main goal in the writing process was to create a vibe — so we didn’t really go into the songs with the lyrical concept in mind. A lot of it started just by singing the melodies and that would form into lyrics. But, a lot of the stuff is about some of my relationships that I’ve been in and then experiencing people taking advantage of me and wanting to stand up for myself for making something good out of nothing. So there’s really a lot of different stories in there…

Yeah, well Coming Home was also really personal: you told the story of your mom and went into your relationships as well. How do you feel you your personal experiences have changed and matured your sound?

I mean Coming Home is safe and it almost comes from a place of innocence, you know? I mean when I wrote that album, I was still sheltered at the time. I hadn’t really seen the world and experienced life to an extent. And so, [after] being on the road for three years, you know, [it’s] nothing too deep but I’ve just matured as a person. And that’s really it. I’ve just, matured.

Do you feel like the sound reflects your maturity?

Yes, for sure —  [my current] sound is definitely reflective of my maturity. I mean you look at the music from the new album and just vocally and stylistically it’s in a place where I couldn’t have sung two years ago. I’ve just grown as a singer and a musician since then.

And we’re all grateful for that! You’re about to head on tour with Harry Styles and then having your own tour in the autumn. Are you looking forward to performing live? How does it feel to be performing in these huge venues?

Would you be coming back to Europe any time soon?

Yes, definitely! I’ll be back in Europe this summer. We’re playing all over really — I believe we will be playing at MadCool [in June], I’m excited to play that. But, yeah, we will be all over Europe then and we will you be back in the fall as well.

So you’re not going to be home for a while, right?

Right. I won’t see my bed probably until next year! 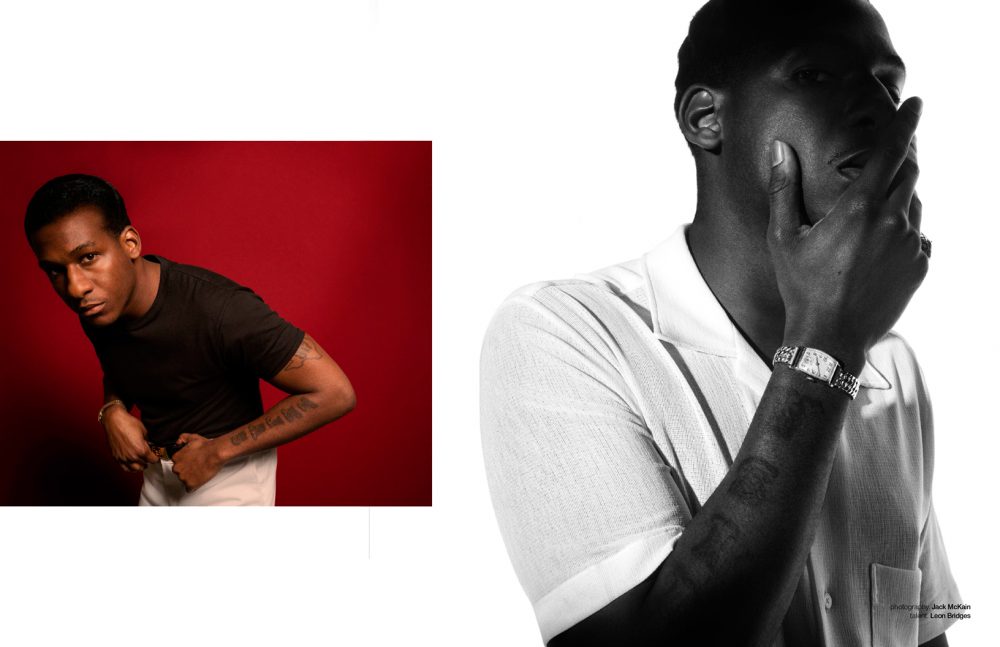 That’s too bad since you just bought a house in Texas as well! How do you feel Fort Worth and Dallas have influenced your music?

I think, being from Texas, I was lucky enough to fall into the music scene and meet some really awesome songwriters and musicians. To be around guys who were doing Rock ‘n’ Roll, Blues music and mixed country, that really made an impression on me when I was coming up into the music scene and that’s reflective in my music. I love to incorporate blues and country and that’s just what the South is about —that’s what Texas is about. I really like to incorporate that stuff [in my music].

Do you ever see yourself leaving Texas?

So is it kind of sad or bittersweet that you feel you can’t stay? I mean I know home is always going to be there but…

Yeah… it will always be there but it is a bittersweet thing but, you know, it’s kind of a good problem to have. It’s awesome that people feel that way about me and my music but then it’s also a problem when I want to go to a grocery store but, you know, I’m just uninspired because I know that if I go by myself it’s going to turn into a thing. But it’s fun.

I guess! I was wondering since the album has been getting rave reviews, do you listen to reviews or do you prefer to stay away from those and just focus on your craft and let the fans talk rather than the critics?

Yeah, for sure. People love it. I loved it. And it’s kind of short so you can listen to it a lot and really get the vibe.

Yeah, it’s cool. It’s a really short statement — it’s not too long of an album.

Would you be releasing more? Like a deluxe version maybe?

Yes — out of that whole session, we wrote about 13 songs and so we’ll release like two songs out of that session pretty soon. And then there’s also another batch of songs that I wrote before this album process that should be out next year, hopefully.

So bringing it back to the old days. Speaking of old days, the album debuted number 3 in the charts and your traditional sales are exceptional for a digital age. Given the retro feel of your music, does it feel like a full circle?

It is pretty rad considering that, in this day and age, we stream a lot of music because it’s [just] convenient. It kind of speaks volumes about my art in that people want that experience when they listen to it. You know, they want something tangible, they want to throw it on their record player, they want to throw it in the car and just have a piece of it. That is just how I am, you know? When there’s an artist that I really dig, I want something more than just listening to it on my phone. So that’s pretty cool.

Yeah, I feel like if you really like an artist, you always go out and buy the physical copies.

So, just finishing up: who would be your dream collaborator, dead or alive?

The juxtaposition would be great! Lastly, what are you most excited about the future?

‘Good Thing’ is out now, listen to it here. Leon Bridges is currently on tour, check out his tour dates here.