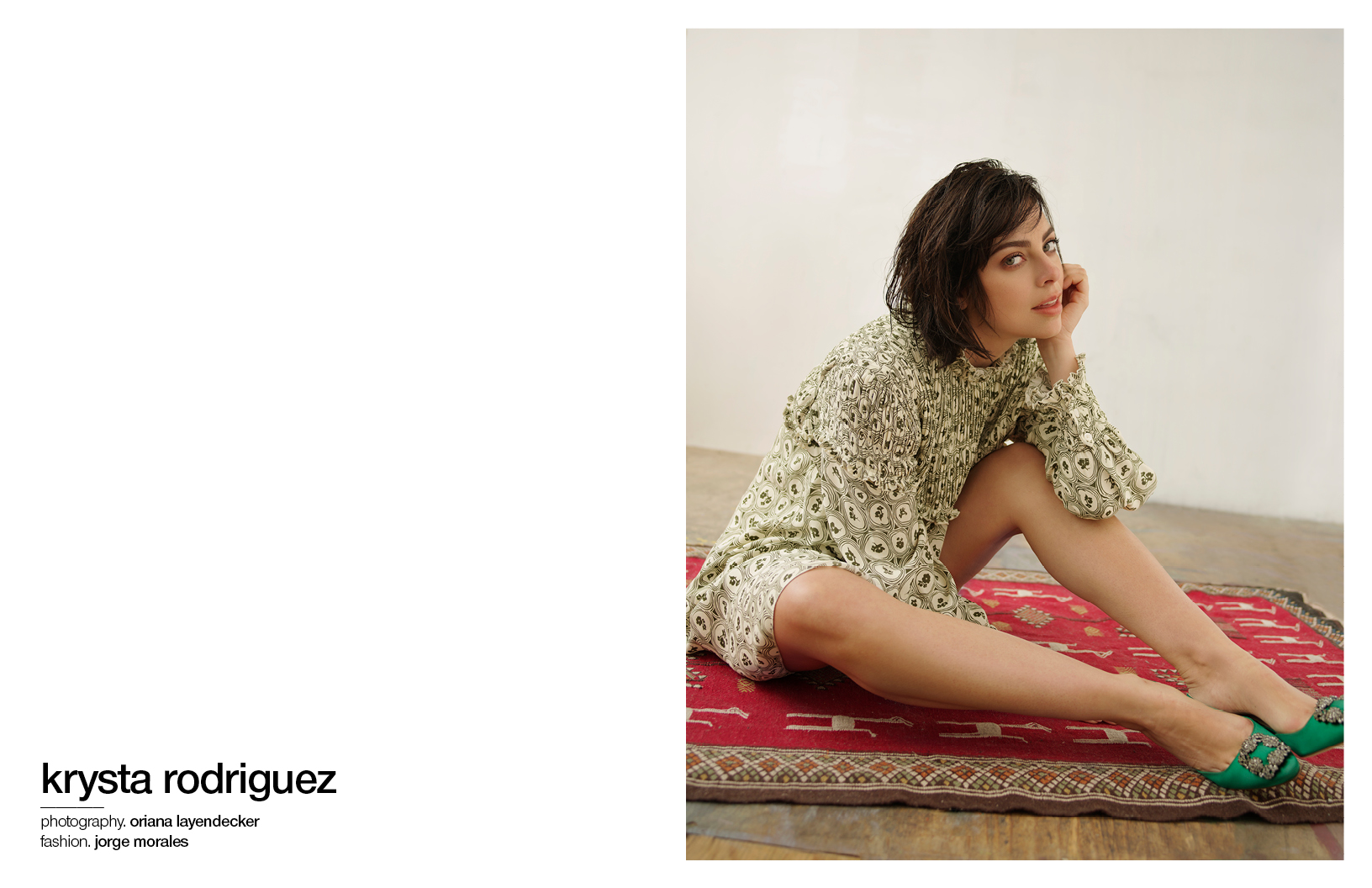 In Netflix’s Halston, Krysta Rodriguez dances across the screen, carrying herself exactly like the icon she portrays — Liza Minnelli. “I often say that Liza and Halston are the true love story of the show,” Rodriguez tells us. “They were each other’s soulmates.” The actress’ upbeat and loving personality can be felt in her take on Liza, demonstrating a beautiful friendship between her and the titular figure. Schön! spoke to Rodriguez to hear more about the show, her research process and what she has coming next.

It’s been so wonderful! Everything has really changed since me and all my friends were vaccinated. I’m travelling again and getting to have intimate weekends with friends. It’s been amazing to watch New York come back to life.

What was it like to do your own version of “Bonjour Paris!” at The Battle of Versailles? Could you recount your experience on the day of filming?

It was a joy to be able to recreate those iconic numbers. We filmed during the pandemic, so getting a taste of theatre after so long was really special. I got to be in a rehearsal room again, creating something new and live. Then we performed it in front of an audience, which at the time, wasn’t possible anywhere else. It felt really electric.

You wore so many of Halston’s distinguished designs for Liza Minnelli throughout the season. What were your favourite aspects about the wardrobe for Halston?

I loved how easy and effortless his clothing was. It’s simple and classic but luxe and elegant at the same time. It really helped me embody the character, because you just wanted to live in his clothes. And Liza really spent her whole life in Halston. I liked feeling that connection between the two characters through their fashion. 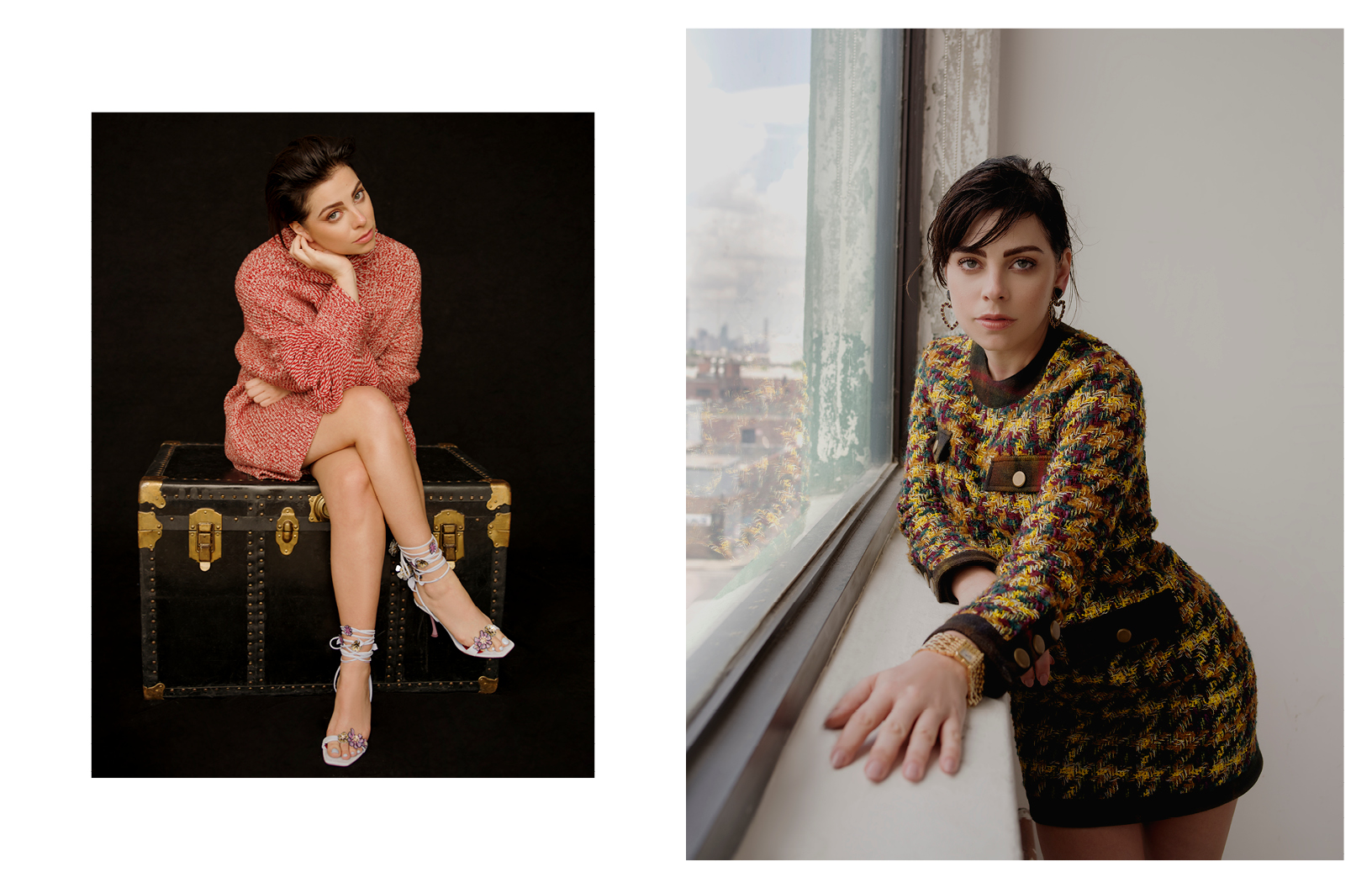 In the series, Liza and Halston have a serious conversation about going to rehab. We see how close they are and how they have immense love for each other. What was it like developing this chemistry and portraying this deep friendship?

It was so fun and rewarding! I’m so grateful that Ewan was so game to dive into this with me. He and I both really cared about representing that relationship properly. I often say that Liza and Halston are the true love story of the show. They were each other’s soulmates.

How did you feel when you got the call to play Liza Minnelli? Who was the first person you told?

I was ecstatic! When you go through the audition process you just never know if the next call is that you got the job, didn’t get the job, or if they need to see more. It’s hard to predict. I happened to be at intermission for an off-Broadway play I was doing when I got the call, and I just could feel before they said anything that it was good news. I had terrible service in the theatre and I had to run outside to the pocket of reception. My agent said, “How would you like to play Liza Minnelli?” And I think my actual response was “F*&# yes!” I really couldn’t believe it. And I had to get back on stage, so I ran into the dressing room of my castmates and just said “I got it!” and everyone got so excited. It was a fun way to start the second act of the play for sure!

You display so many of the special aspects of Liza’s mannerisms throughout the series. What were a few points in your research and development of the character that helped you portray her so well?

I’m not sure why, but I was really drawn to her hands. She spoke with her palms facing out and would gesture with them like that. We had these extensive fake nails on, and whenever I would need to drop into her physicality, I would start using my hands like her and it helped immediately. I would also relax my hips and neck. The 70s was a time of freedom and as soon as you let that tension go, it puts you right in that mindset of openness. 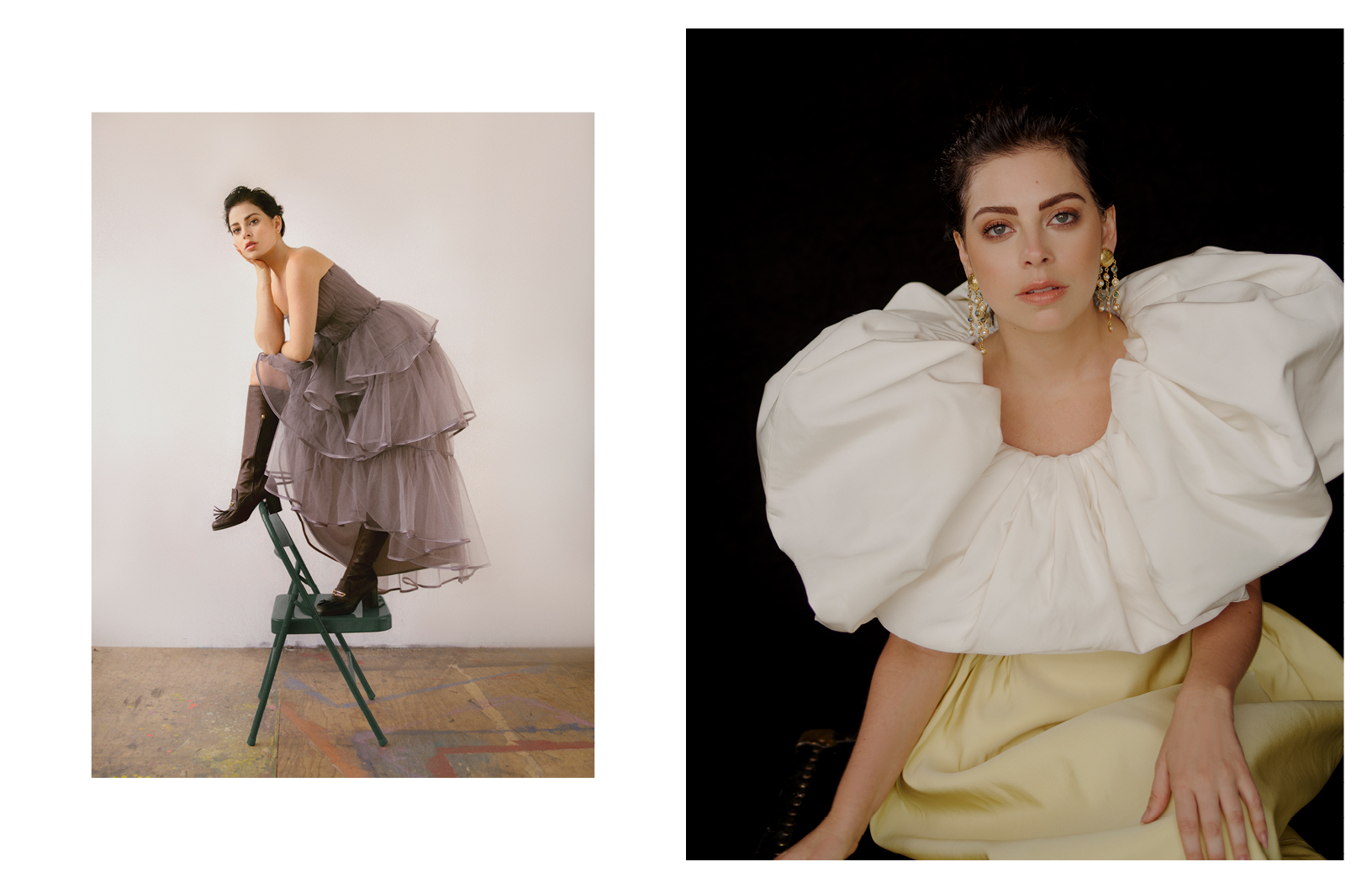 Could you give us a few of your favourite moments of working on set for Halston?

I really enjoyed shooting the Studio 54 scenes. It was toward the end of shooting, so we had all become really close. The set design was incredible and the place looked just like the inside of Studio. Because of Covid, we could only have a small amount of people in there, so it felt like the chicest private party at Studio 54 with your close friends. We really had a good time staying up all night and dancing together.

It’s a pivotal moment for Halston when his name is sold in episode 4. It’s a big issue in the fashion industry when designers have their name on a brand and it is sold to another company. In both your research and your performance, what did you think of this moment?

I think it’s so important to tell this part of the story because we can learn from what happened to him. These days, it’s more normal to have a person with an empire, and the story of Halston teaches us to protect ourselves. It’s harder to get taken advantage of when you learn what’s at stake and have an example of what not to do. What Ewan did so beautifully in his performance is allow you to see how easily it can go from being a genius who wants to show he’s good at everything to watching the world crumble around him and know it was partly his fault.

Speaking of Ewan, how was it to work with him? Any notable moments from set?

He is so amazing to work with. He had boundless energy, with such a huge job on his plate. He really made it look so easy. He could play his part with care and specificity, but still have the ability to connect with all of us. He makes me laugh so much! We really had a great time. One time, I was getting ready to perform a take of “Bonjour Paris!”, and it was the first time he was going to see it. He got settled into his box seat, and right before I started, he yelled “LIZA!” I turned around and blew him a kiss, and it felt so much in that moment like we were Liza and Halston. We could be so supportive of each other so easily. 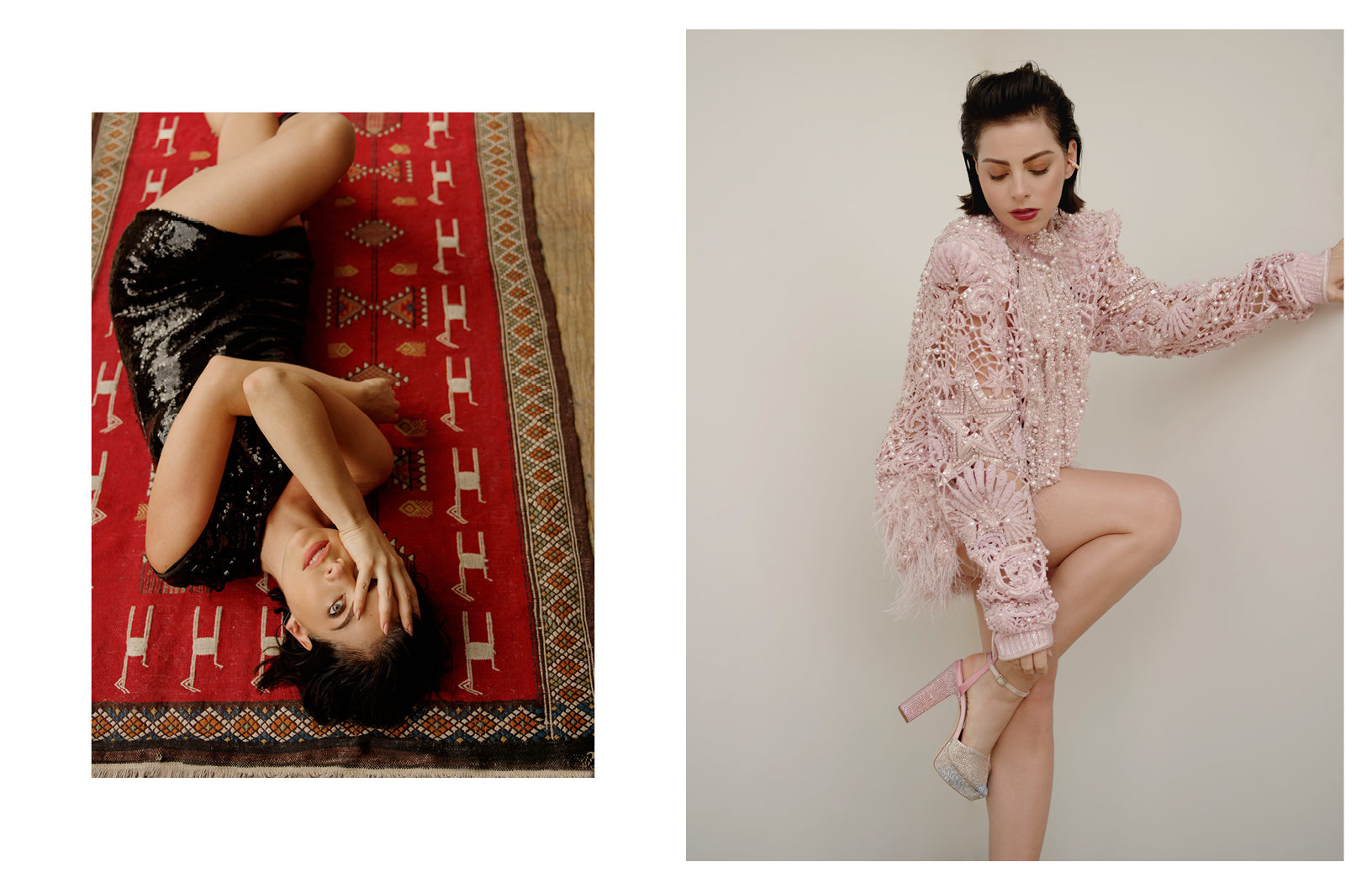 Could you tell us any one moment that helped you become the actress you are today?

I think it’s been more about little moments that I don’t even realise have happened until I find myself up against a new challenge and suddenly feel ready for it. As I get older and start to narrow in on the roles I like to play, I find myself learning to release some control and live in the unknown a bit. That will be a lesson I keep having to learn for the rest of my career, but each job I have, I feel like I get just a little closer to it.

Do you have any dream roles or characters you’d love to portray?

I always like to say my dream parts might not have been written yet! Besides Sally Bowles in Cabaret, I’ve always been most excited by new work. I love to be involved in developing shows and putting my stamp on it early. It’s the holy grail, to be able to have a hand in what the role becomes.

Last question! What can we look forward to seeing from you next?

I’m working on some fun TV stuff that I’m excited about. In addition, I launched an interior design business called Curated by Krysta Rodriguez over the pandemic. It’s always been a passion of mine, and Halston’s aesthetic really inspired me to finally take the leap. I hope to make it a part of my business now, acting and designing all over the world! 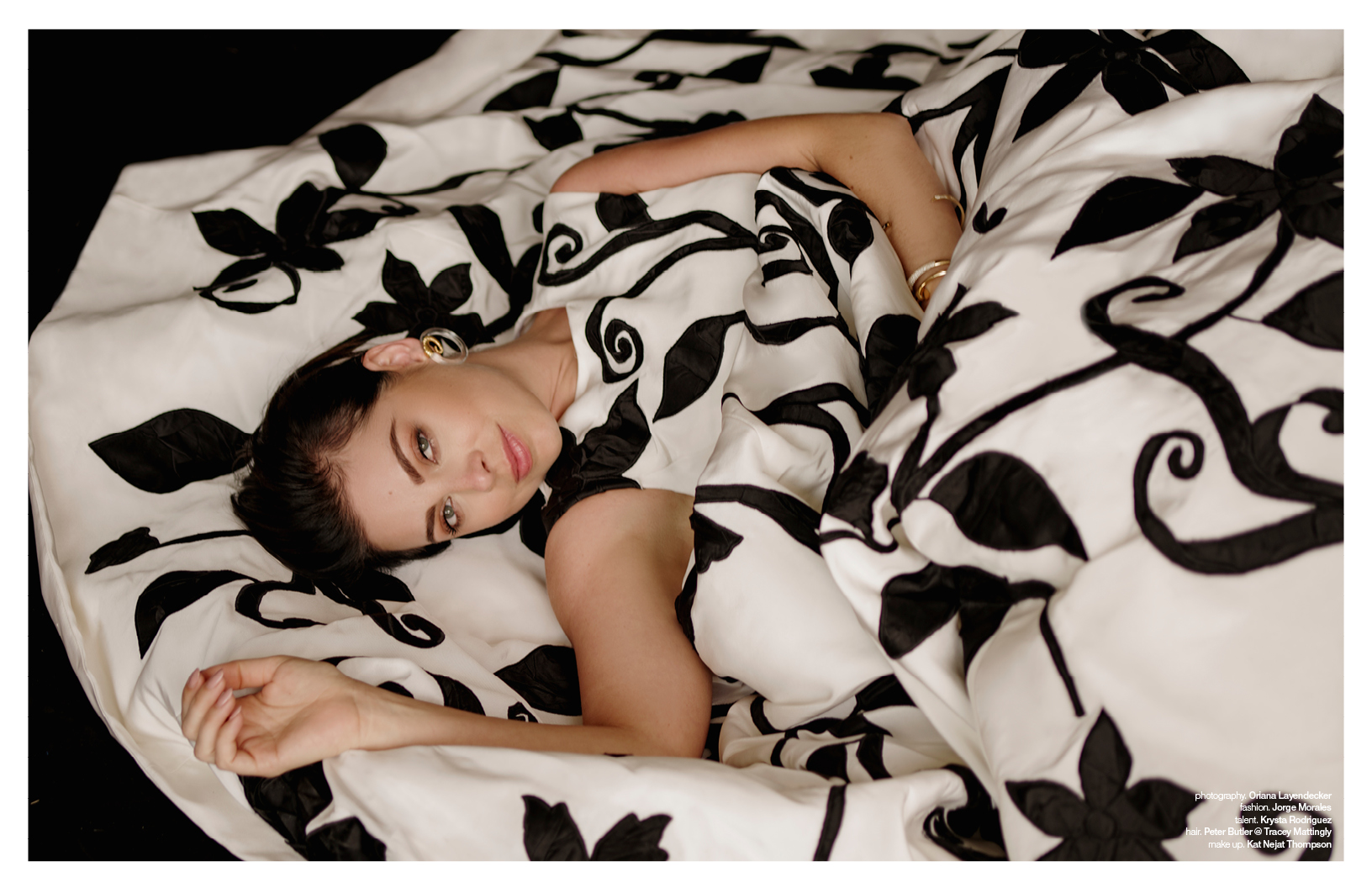 Halston is currently streaming on Netflix.