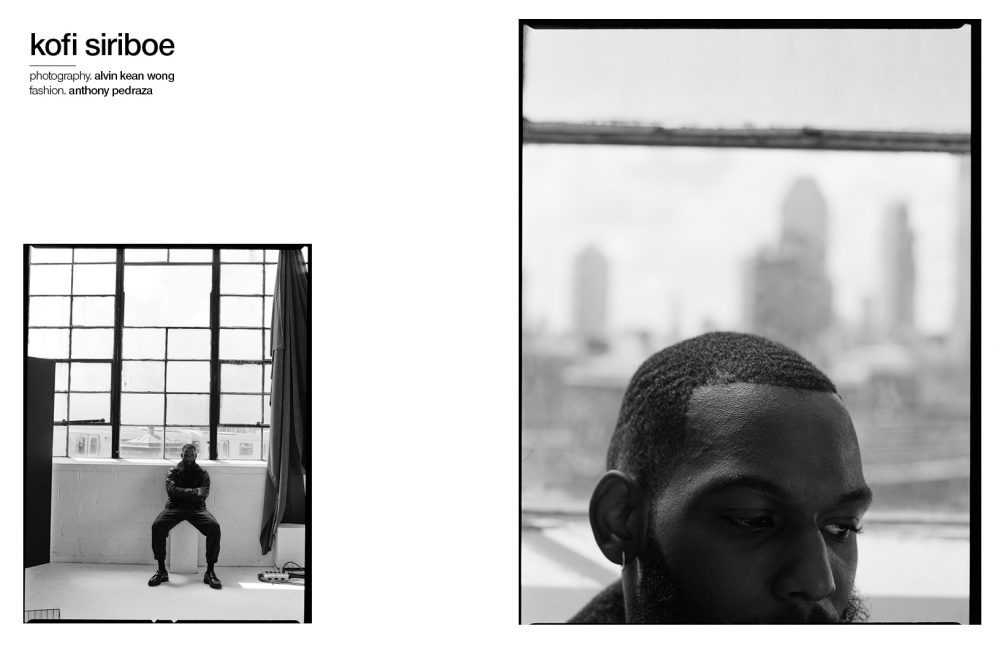 Kofi Siriboe is a man with a message. Beginning his career at the age of six modelling for print and television campaigns, the 25-year-old actor slowly started to garner more attention for his dramatic ability. He was cast in 2008’s The Longshots before landing parts in Whiplash, Girls Trip and a recurring role on MTV’s Awkward. Nowadays, he can be seen on OWN’s Queen Sugar, the series created by Ava DuVernay where he stars as Ralph Angel Bordelon.

But Siriboe had interests behind the camera as well. Last year, he launched VIAKOFI, a production company set on, in its own words, exploring “youth, identity and the wonders, tragedies and peculiarities of Blackness.” So far, the company has released two short films, Jump and What the Fuck is Mental Health? – both socially-conscious films where Siriboe took on the role of writer and director. As Queen Sugar wraps up its fourth season, Schön speaks to Siriboe about why the series is a form of activism for him, life, and what he has upcoming. 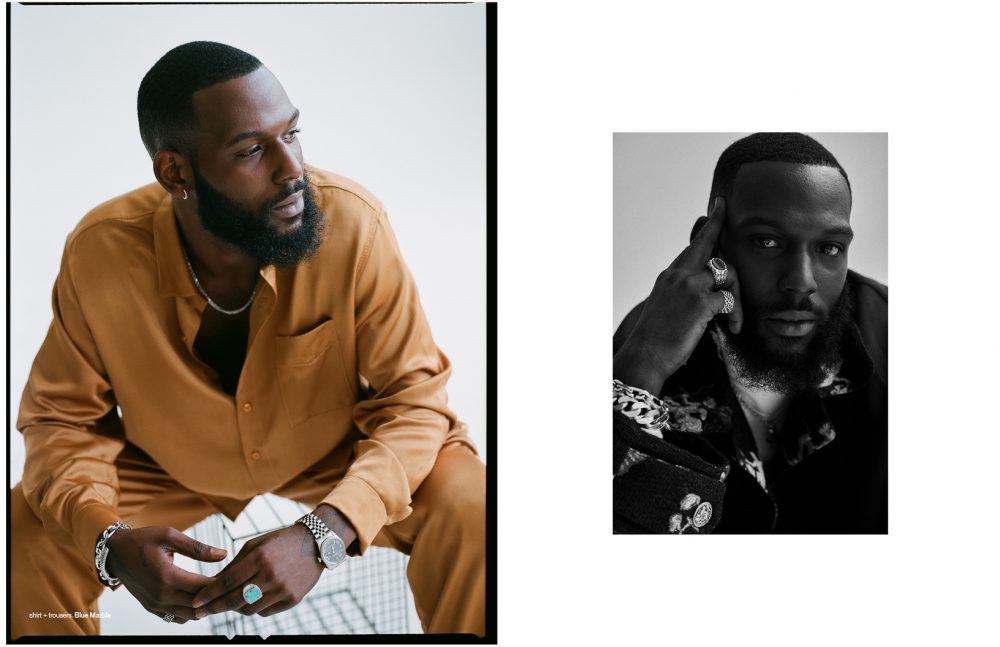 When, and of course, why did you start acting?

Man… I was a youngin’. It was definitely divine. I never made a conscious choice to start acting. I started modelling, doing print work as a kid and it transitioned to acting as I got a bit older. I have two brothers who also act. Growing up in L.A., people would always come up to my mom like “Aw, your kids are so cute, you should put them in commercials.” One day the right person came up to her and she followed her instinct — she followed up and here we are. It really just happened. I started taking it more seriously around the time I turned 18. As I got older, I realised, I really just love people and storytelling. Naturally, as I evolved as a human being, my career grew with me.

Were your parents always supportive of your acting? What’s a lesson you learned from them that’s helped you in the industry?

Most definitely. My parents are supportive of everything I do. My pops, being a traditional African father, took some time, but I feel like once he realised how important it was to me, he came around. He’s my biggest fan now — he watches everything I do.

The biggest, biggest lesson I’ve learned from them is to remain rooted in my truth and never forget where I came from. My parents have a spirit of excellence they’ve instilled in me: no matter what you do, just be excellent in it. That’s taken me far. There’s no in-between. Just excellence, on every level: spiritually, physically, mentally. 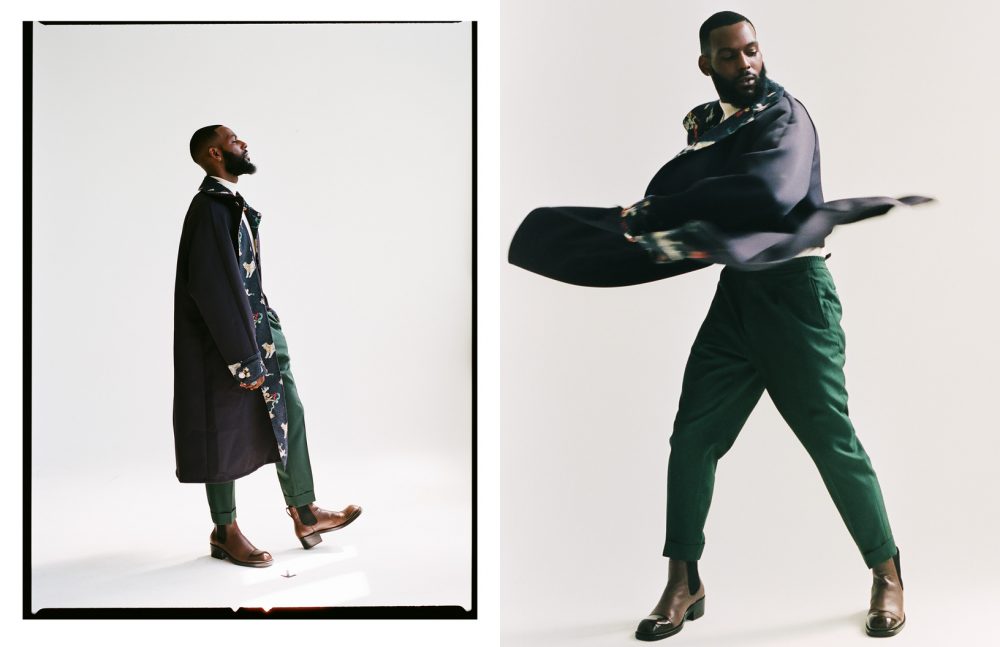 Your first recurring role was on MTV’s Awkward. How did you land that role, and can you describe the experience of working on the show?

It’s wild how it happened. I moved to New York in late 2013 to live with a friend because I was getting frustrated with L.A. I felt like my routine was redundant — I was auditioning a lot and not booking jobs. I just felt like I had to switch things up. I saved my money, quit my nine to five and moved — I was actually living in Newark, catching the train to the city every day. Not even two months after I got to Jersey, I got a self-tape audition for Awkward. I ended up getting a callback and had to do my screen test via Skype. Sure enough, I booked it.

Awkward brought me back to L.A., which was the best way to come back. It was my biggest role to date. It was also a comedy and I always identified more with drama so it was a challenge for me. I was way outside my comfort zone but now I know that was God setting me up. I feel like my role as Tyler allowed me to embrace Ralph Angel more wholeheartedly.

How does filming Queen Sugar, where you star, differ from something like Awkward?

I guess there’s a heightened level of responsibility because of the workload, as well as my personal connection to the story. Queen Sugar is a form of activism for me. I’ve seen so many friends and family members affected by the same social issues we tackle in the show — it could never just be acting for me. Awkward felt more like a character whereas Queen Sugar is a world I’ve inhabited and experienced. It’s kinda like hyper-reality in a sense. Awkward, on the other hand, was very fantasy-like.

I think he’s the same person to me, just more refined. I have a deeper understanding of him and a stronger level of empathy for his process. When I first met Ralph Angel, I saw a broken man with a lot of baggage. I couldn’t see where he was going, but I understand him more now — he’s maturing. He’s making amends with his past, learning to forgive himself, which makes it easier for the world around him to do the same. He’s been evolving as a human being –evolving as a father, a brother, a lover. My respect for him has grown as I’ve learned more about his personal history. He’s taught me lessons on patience that I know I wouldn’t have experienced without existing as his vessel.

Queen Sugar has a lot of firsts — it’s said to be the first fully female-directed TV series, for example. What does it mean to you to work on something like Queen Sugar?

There’s a deep level of honour and respect for the world; the creators, Ava, Oprah, my castmates, New Orleans, and all the history we’re able to illuminate and include in the show. It’s therapeutic for so many people, including myself.

Shows like Queen Sugar just don’t come along every day and I pray we become less unique in that sense. It’s so important for the culture to see that it’s possible to expand the boundaries, in front of the camera, and behind the scenes. I take the space we occupy very seriously. 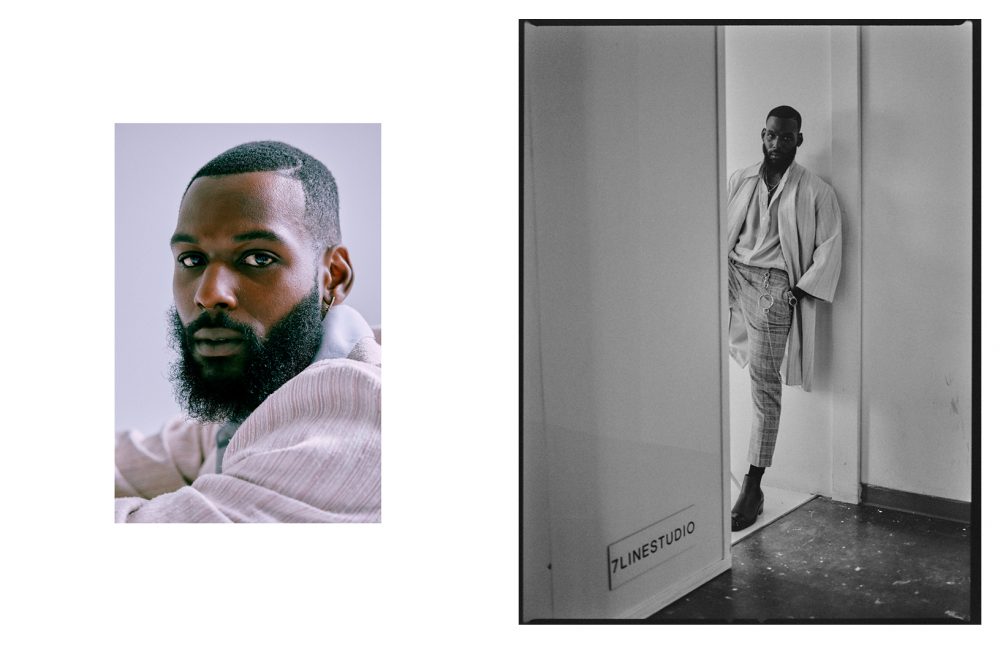 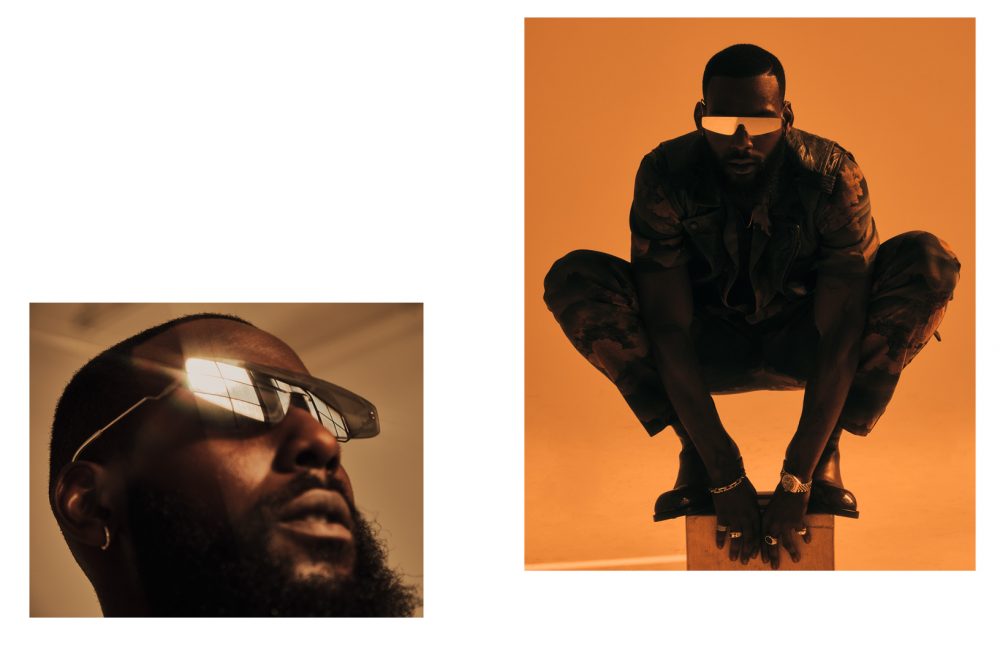 What has been the craziest experience of your career so far?

Honestly, the actual realisation that my life has changed and accepting everything that comes with that – that’s been a journey in itself. When I realised I just wasn’t Kofi from Ladera cruising in my Celica anymore, it was a little hard at first. People recognising me, friends switching, all that stuff – it came so fast it seemed. I started feeling a little crazy. I always say, “I went crazy to avoid going crazy.” It’s true. Some days are definitely tougher than others but I’m constantly adjusting. I must say, having lunch with Oprah at her house was pretty crazy too – the weather was perfect that day.

What compelled you to start directing?

Well, sometimes I feel restricted as an actor – I feel like I’m always inhabiting worlds other people create, but I don’t get to initiate them. Directing is more dynamic in that sense. I’ve always enjoyed all the moving parts, working with different departments, etc. I love God and feel like he’s the ultimate storyteller, director, and producer for that matter. Essentially, I’m just trying to mimic Him in every way possible. Anybody who knows me knows my heart has always been behind the camera.

How did you get involved in mental health awareness and the creation of your first short, JUMP?

The topic became more real to me when a friend and big brother figure of mine committed suicide in 2015 by jumping off a bridge. It didn’t make sense to me – it was very unexpected, yet very real and I had to live with that. In the midst of my success, I was still lost; I was seeking clarity, so I started asking questions. In a weird way, I guess that loss led me to JUMP. It’s been a free-fall ever since. I always wanted to shoot in New York and I promised myself when I had the funds to make a film myself, I would. JUMP became a space of discovery and transmutation for me, [and] education as well.

Tell us about What The Fuck Is Mental Health? — the video you directed and produced last year.

I love that video, man. WTF Is Mental Health? is the question that arose from the completion of JUMP. It was a response to what I just made. After we finished editing the film, I still had questions; I felt like, “aight, cool, it’s done, and then what? If I still have questions, I know I won’t be the only one.”

I felt like I had to be responsible: I couldn’t just release JUMP and be done with it; I had to give people context. It definitely initiated my own mental health journey. It challenged me to look deeper into my own mind, to explore and acknowledge those gaps I had in my mental, which wasn’t easy. It’s cool because, in JUMP, you get to experience mental health first hand. In WTF Is Mental Health? I wanted to create a space where we could talk about it candidly and deliberately. 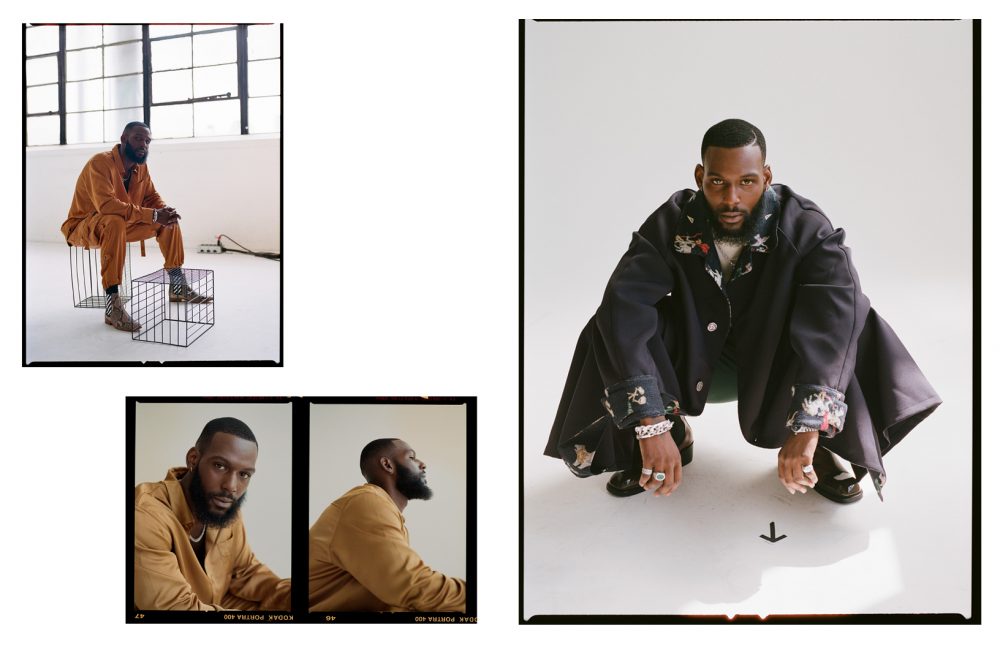 What is the overall message you want to deliver with the content you produce?

This question makes me think of one of my favourite quotes; ‘The only problem with not knowing is thinking you’re supposed to know.” My message is connection and cognition – using content as a tool to connect the dots back to our true selves. Through storytelling, we get to ask questions and those questions bring us closer to each other; to ourselves. I believe healthy content helps dilute the deception of disconnection. Ultimately, this makes navigating life much more pleasurable. Being young, being black, there aren’t a lot of spaces sculpted for us to process our emotions. I feel my perspective as a young black man is valuable to this world and I want to use my voice to create more accessible spaces, whether digital or physical. Truly, I want us to shatter the ceiling of identity. That’s my goal.

It’s almost 2020: ultimate clarity, ultimate balance. I feel like a pioneer in this movement – I feel like we all are in our own rights and I take that very seriously. Indeed, I’m looking forward to right now. 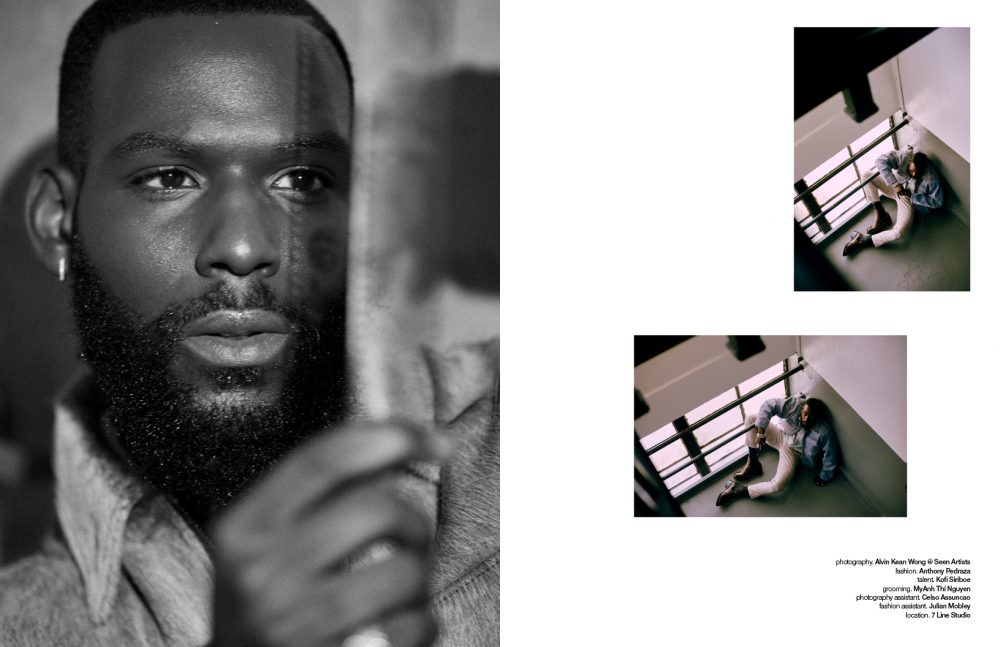