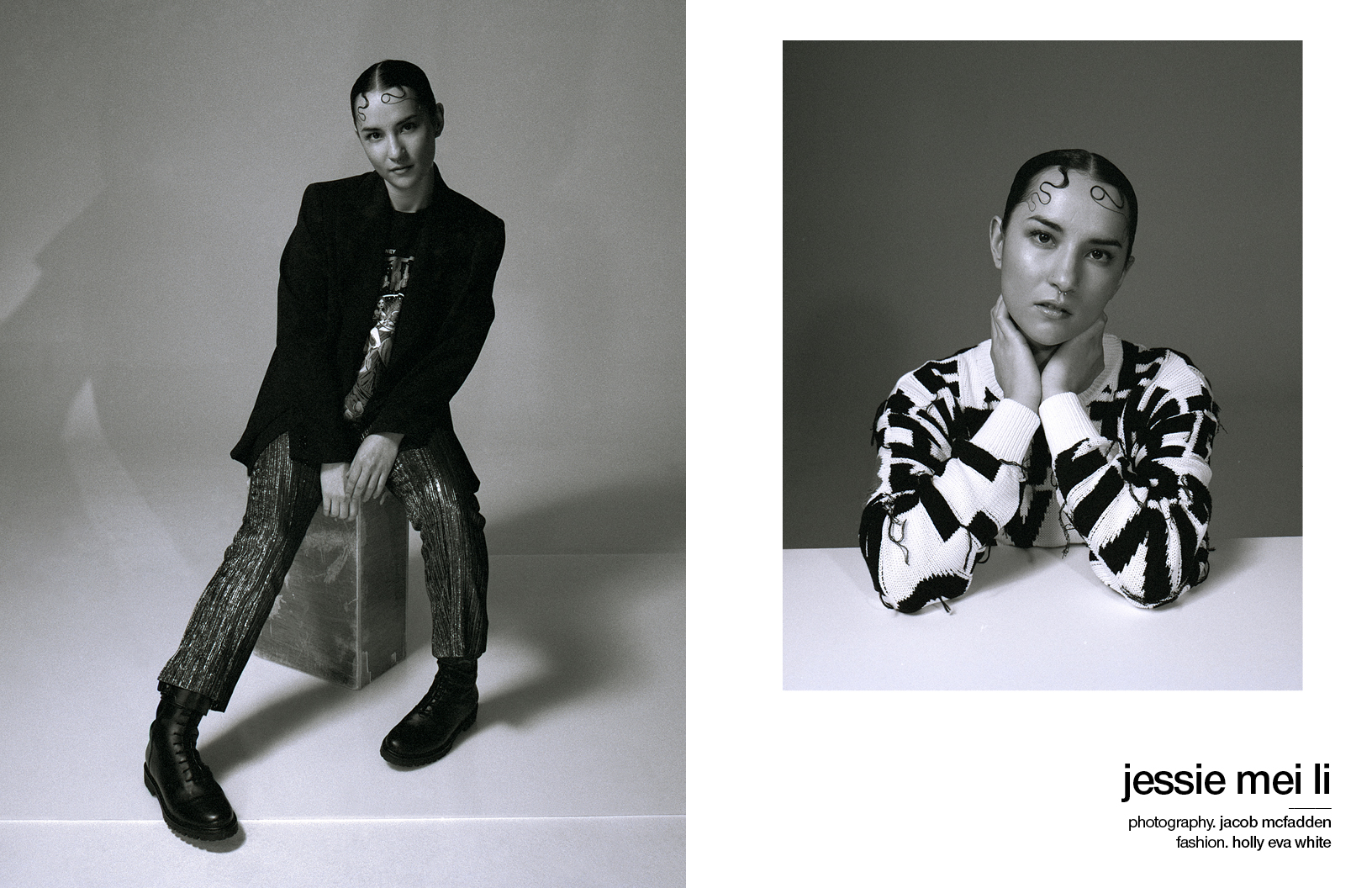 Shadow and Bone takes viewers to a world of intrigue, magic, terror and more. As series lead Alina Starkov, Jessie Mei Li is the lens through which viewers experience this frequently frightening world, following Starkov’s journey as she realises her true power. This is Li’s first leading role in the television programme, but they command the screen with ease, proving to be the perfect Alina Starkov for both fans of the Grishaverse and newcomers to the story. Schön! spoke with Li ahead of the release of Shadow and Bone for a look behind the scenes.

Hello Jessie! First, we naturally have to ask about this past year. We know series filming was wrapped before the pandemic hit, so what’s been keeping you busy/entertained in the past year?

Lockdown was a bit tricky at first. I really love being around lots of people, so spending time in solitude took some getting used to. But I definitely needed it. I did lots of writing, mainly short film screenplays that I’ll never make, and I directed a music video with a friend. We both featured in it too, which was really fun. I’ve also recently started learning how to cut hair. It’s so satisfying! I’ve so far refrained from turning the clippers on myself, so I’ve had some brave volunteers who have let me use them for practice! Perhaps I can open up a little barber shop if the acting doesn’t work out…

Congrats on Shadow and Bone! What first drew you to the role?

Sometimes when I get an audition, I read the character description and it’s full of buzz phrases like ‘headstrong, feisty’ or ‘doesn’t take any shit’ with little else to work with, but Alina’s description jumped out at me. Just in this one small paragraph they’d managed to paint a picture of someone who felt like a real person, a frightened girl who grows to become this powerful leader, with helpful details like the fact she had ‘the observation skills of someone with a refined sense of fight-or-flight’ due to her mixed-race heritage and growing up in a war-torn country. I felt like I could already see her standing there looking lost and helpless and I already wanted to protect and nurture her! 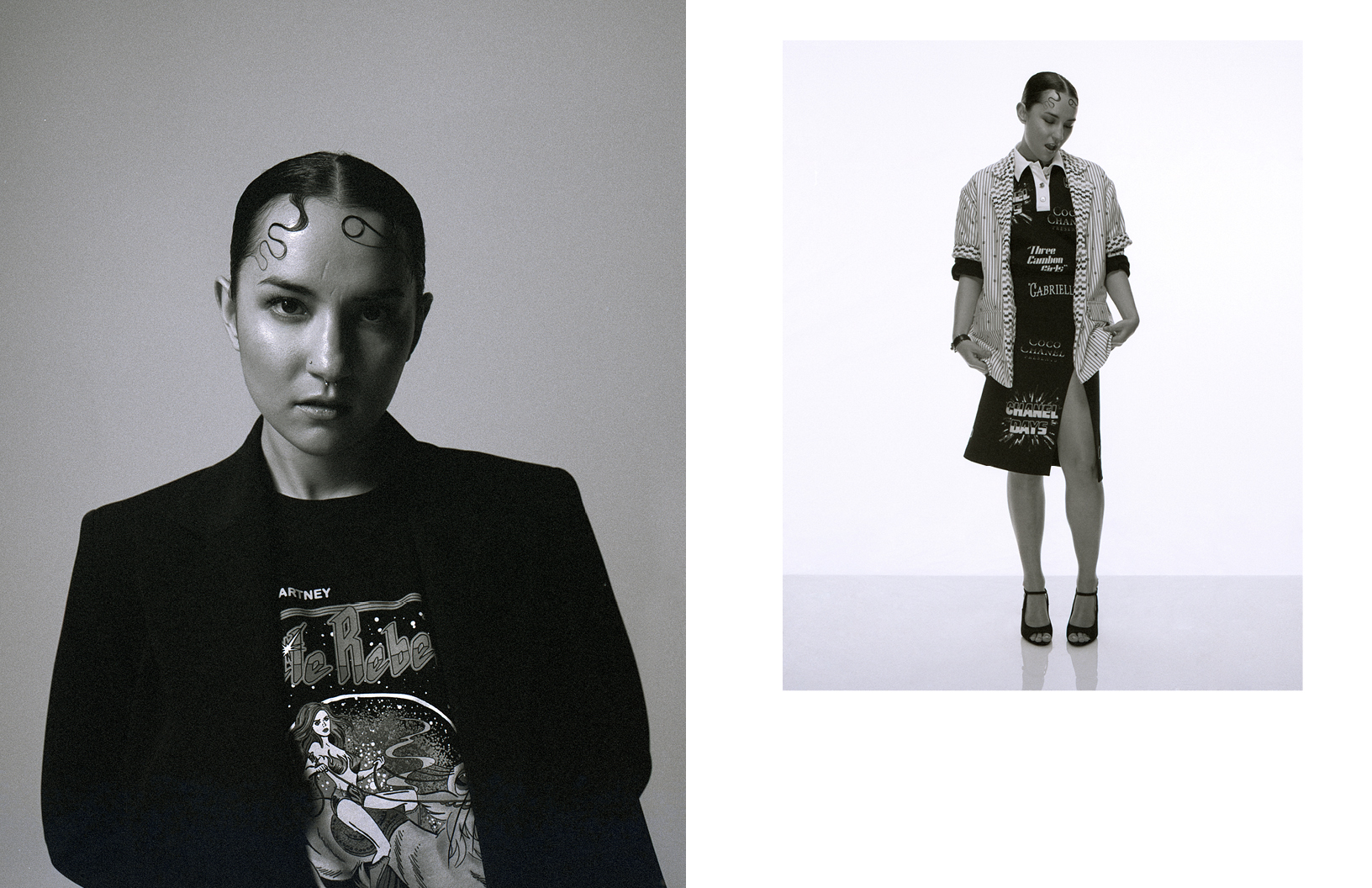 Shadow and Bone is based on the books of Leigh Bardugo. Did you read the books prior to joining the series? What did you take away from the books to bring to the series?

I think everyone in the cast turned up having already read the books. When we first got to Budapest, we’d all mostly only read the first two episodes, so it was fun for us all to speculate and get excited about the direction the show would go in and how all our characters would meet up. The books were so helpful for me to flick through often to keep track of Alina’s journey — she goes through lots of changes throughout the season and I wanted to make sure I hit all of the beats in her arc correctly.

What did preparation for the role of Alina look like?

I had such a clear idea of who Alina was in my head, but what I felt was most important to get right was her relationships with other characters, especially Mal, Kirigan, Genya, as they all have such a profound effect on her. I also wanted to ensure that everyone in the cast felt comfortable and safe and that they had a good support system around because that’s when you can do your best work. So, most of the prep for me, despite some horse riding and basic stunts, was really building up our real-life friendships in the cast, which, with this group, couldn’t have been more enjoyable.

Speaking of which, you have some very tense scenes with Ben Barnes, who plays General Kirigan. A lot of people talk about romantic chemistry in films, but often adversarial chemistry is just as important — how did you develop that ‘perfect enemy’ tension between yourself and Barnes?

Ben and I are close pals, and like most good friends, spend most of our time outside of work just winding each other up and having debates about literally anything. We were both so comfortable around each other and that meant that there was a lot of trust and respect between us, which I think can make all the difference. We really listened to each other. Ben is such a generous scene partner, and his performance as Kirigan was so considered, powerful and explosive that I had so much to work with and react to.

There are many human layers to Alina — her relationship with Mal, the way she deals with the racism she faces, and more. What about Alina’s experiences over the course of this series did you relate to most?

Alina doesn’t really know who she is when we first meet her, but she’s learnt to just get on with it and accepts her reality. This is definitely something I shared with her when I was growing up, always feeling like I wasn’t necessarily being true to myself, not really fitting in and knowing I was a bit different. But I’d learnt to just be grateful for the good things I had and rarely challenged the status quo, choosing instead to play things safe. But like Alina, I’ve come a long way in recent years from who I once was, and finally getting to know the real me.

What was your favourite moment from making this series?

I was so lucky to get to work with almost everyone on this show. There are very few characters who don’t end up crossing paths with Alina. It’s hard to point out a particular moment as there were so many. However, the last few weeks of filming were so bittersweet — sitting around playing stupid games, laughing, singing and playfighting with the majority of the main cast as we shot episode eight, often slowly slipping into that late afternoon hysteria, making the most of all being together as we knew it was coming to an end. 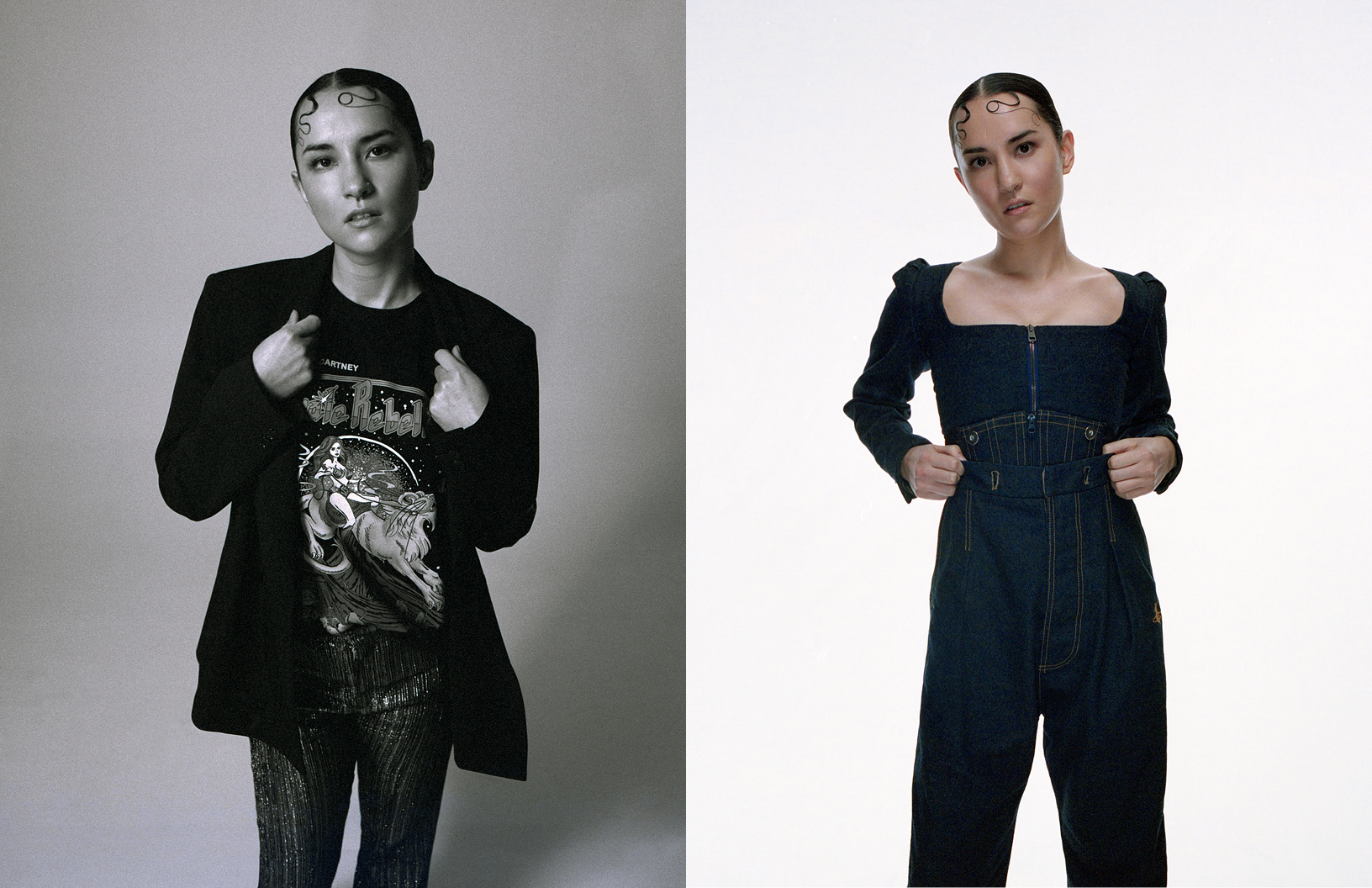 Season one ends with a lot of mystery surrounding the Fold, its creatures and The Darkling, along with Alina needing to lay low for a while. If Netflix picks up the series for a second season, how would you like Alina’s character to grow and change?

I think Alina has been fairly well behaved in season one, but I feel like she has a darker side, a side to her that could be easily seduced by the promise of power, something that we see a glimpse of in this first season. She has suffered a lot in her life, and sometimes the repercussions of a difficult childhood don’t reveal themselves until later in life. I think she must have a deep anger inside her, something she’s always had to keep in check and push down so as to not draw more unwanted attention to herself. I’d love to be able to explore that further.

Obviously Alina is a sun summoner, but if you could have one of the Grisha’s powers shown in Shadow and Bone, which would it be and why?

At the time of this interview the show isn’t out yet for another few days, and I am pretty terrified at the thought that someone might recognise me on the street once it’s out… So I think being a Tailor like Genya would come in handy. Although I’d probably end up being tempted into using my skills far too much to cause havoc and find my way into places that are normally off limits. I just can’t resist a bit of mischief.

Generally speaking, what does being in this series mean to you?

Filming this show was the best experience of my life so far. Of course, sometimes it was exhausting, and in hindsight I could have taken better care of myself instead of going at 100 mph constantly. When we weren’t on set, we were hanging out together having meals and drinks out or dinner parties at mine. I also flew most of my close friends and family out to visit, so even most of my weekends were very busy. But I had so much fun and truly made friends for life. No matter how it’s received, I will always love it because of that.

You’re also going to be in Edgar Wright’s Last Night in Soho later this year. What can you tell us about your role in that?

I’m a huge fan of Edgar’s films so I was thrilled to work with him. I only have a small part, playing one of the classmates of the lead character Ellie, played by Thomas Mackenzie, who is amazing. It was such a great experience, and I learnt a lot from being on that set that I then took forward with me when we started filming Shadow and Bone.

Finally, you’re a vegan! What inspired you to go vegan?

I grew up eating A LOT of meat — Peking duck and Char Sui pork were favourites of mine when with my Chinese family, as well as having a very “meat and two veg” approach to meals from my English side. I’ll admit, I was a big detractor of veganism for most of my life and would often feel compelled to tell anyone who’d listen that ‘I just couldn’t give up meat’. So, it was a huge surprise to friends and family when I went vegan! I flirted with vegetarianism for a few years after one of my friends started explaining to me the effect of the meat industry on the environment, only to then go fully vegan four years ago, and I’ve never felt better!

I’m not much of a forward thinker, unless it involves food. I’m very much looking forward to my dinner later — Pad Thai is my ultimate fave. In fact, now I’ve started thinking about it, I can think about little else! But really, now that the world is slowly opening up again, I can’t wait to catch up with friends face to face. Over Thai food, of course. 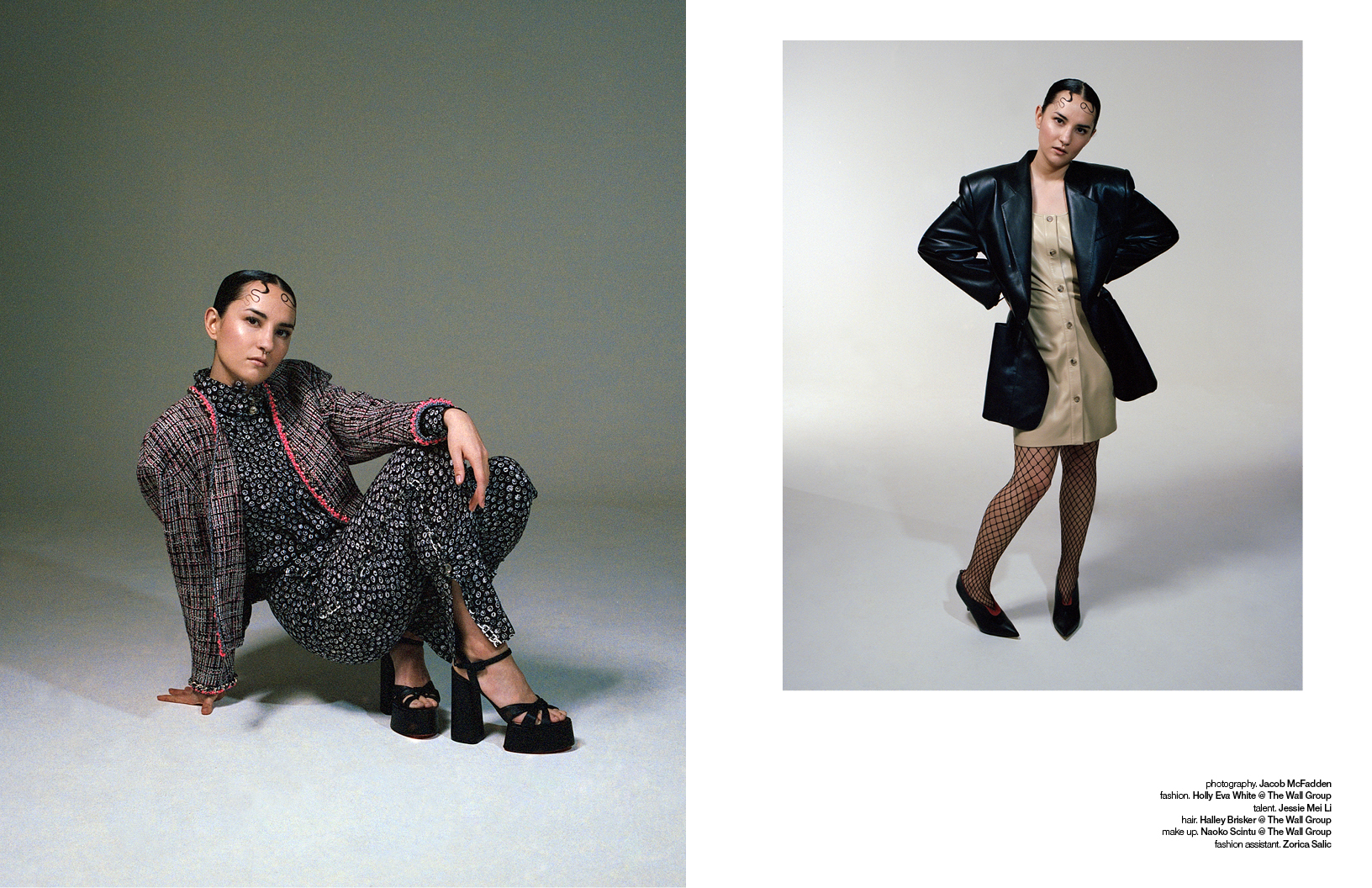 Shadow and Bone is currently streaming on Netflix.