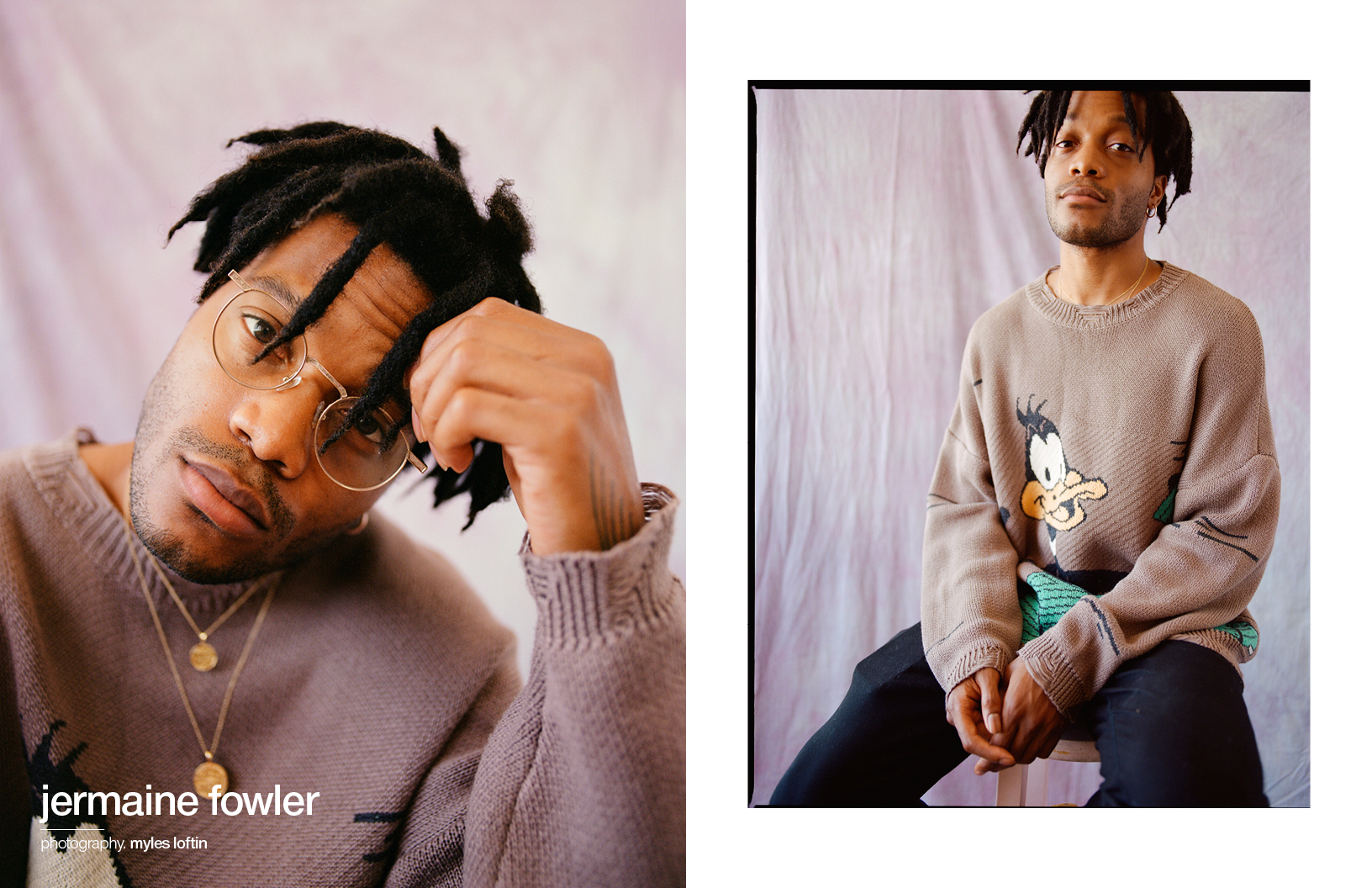 These days, there isn’t much Jermaine Fowler hasn’t done. After starring in the CBS sitcom Superior Donuts, he went on to appear opposite LaKeith Stanfield in the cult treasure Sorry to Bother You before landing a recurring role on HBO’s Crashing. In February of this year, he also featured in the film Judas and the Black Messiah; the film has already been nominated for several awards including a Critics’ Choice Award for Best Acting Ensemble.

Goal-orientated, Fowler’s focus is to stay present, celebrating all wins no matter how small. This month’s win is pretty monumental — the highly anticipated sequel Coming 2 America is finally being released, a film where Fowler plays Eddie Murphy’s onscreen son. Multifaceted, and having cut his teeth in writing and producing, Jermaine is a distinctive voice in filmmaking today.

I want to talk first about Judas and the Black Messiah. How familiar were you with Mark Clark before portraying him? What did you learn about him through the process of making Judas that has stuck with you the most?

I was not completely familiar with Mark Clark’s story before I was asked to portray him, [but] I was very familiar with Fred. I did as much research as I could on Mark. Having Shaka and Fred Hampton Jr on set was extremely helpful. They dropped a lot of knowledge on me regarding the night of the assassination. That’s why we should be doing more films like these. We should not only be informing the world, but ourselves. That is so important to me.

When you first read the script, what about the story resonated with you?

That these events only happened 52 years ago and are still prevalent today.

You’re going to be in Coming 2 America! Coming To America came out a year before I was born and was a very strong obsession in our household. Unlike anything ever seen before in post-Soviet Russia, the film instantly became a cult classic, and Eddie Murphy — god. Do you remember your experience seeing it for the first time?

I had to have been 8 or 9, maybe even 10 when I first saw it. It stuck with me immediately. The barbershop scenes are still the funniest scenes ever filmed. Eddie and his work is timeless. Funny enough, I saw Mulan before I got familiar with Ed’s earlier work like Beverly Hills Cop or Nutty Professor. Mushu is still THAT nigga.

Now you’re starring in the sequel, among an epic cast. Do you have moments of impostor syndrome, or are you able to settle into a space of believing, “Yes, this is where I ought to be”?

I worked my ass off to get where I am. Not just in my career, but on myself. I deserve to be where I’m at. I’ve paid my dues. It’s time for me to enjoy the life I’ve created for not just me, but my children. I couldn’t be more proud of myself.

You play the character of Prince Akeem’s son. How did you approach/prepare for the role?

By adding context to the character that may have not been on the page initially. Just piecing together some layers that make acting fun for me. Most of the time, I just made sure I was connecting with KiKi and Nomzamo off set as much as I could. Our relationships in the film are pretty emotional, so I wanted to get to know my co-stars as much as I could. And I’m glad I did because KiKi and Nomzamo are the coolest actors ever!

What was your biggest takeaway from making Coming 2 America?

It’s important to just be yourself. No matter the setting or circumstance. Be you. 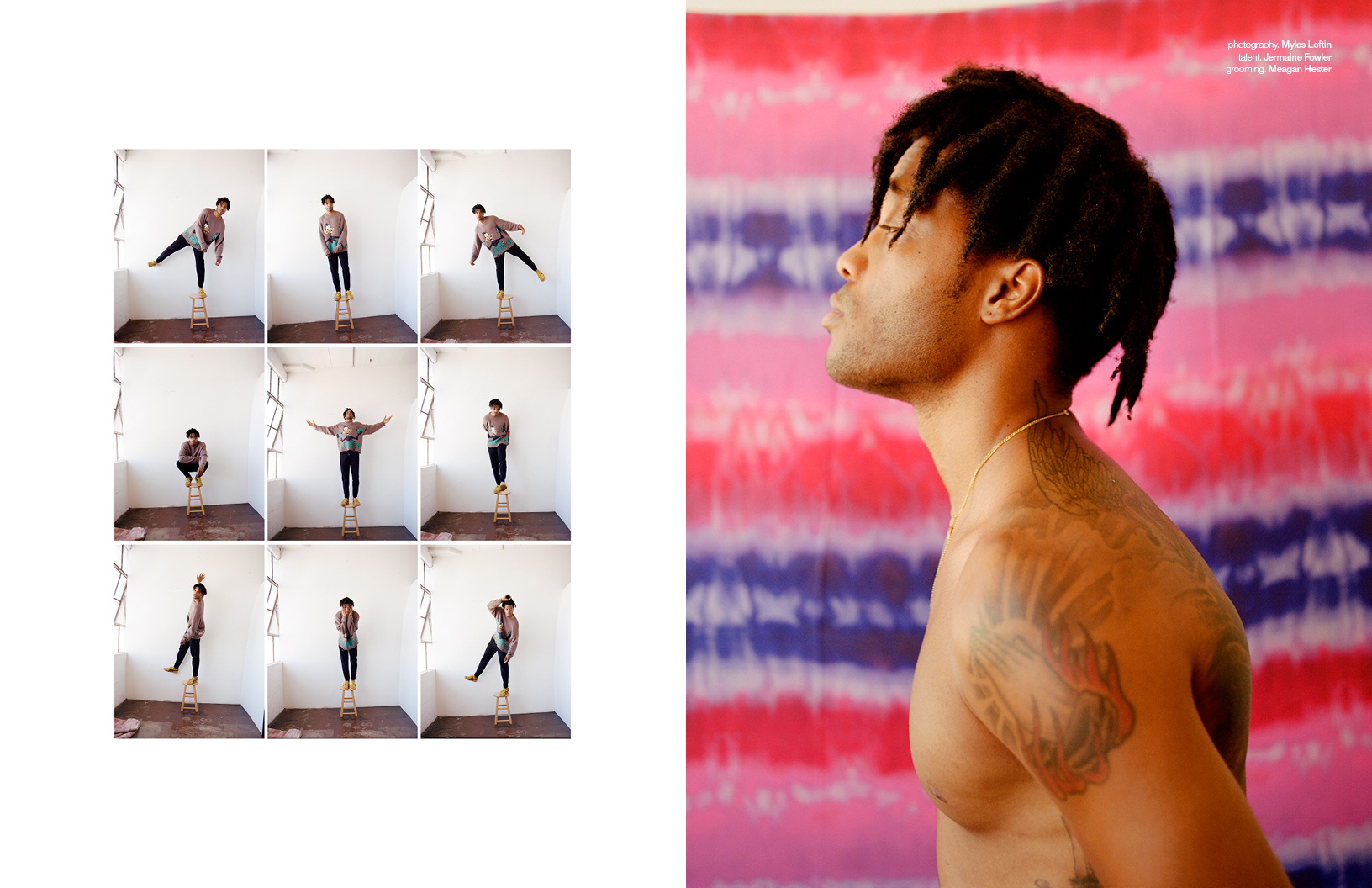 We’ve seen socially-conscious comedy become a lot more popular in recent years. Do you think having an element of social awareness is now essential for comedy, or is the laugh all that matters?

Socially conscious comedies have been around for decades. We have to give credit to the artists that’ve set such a standard for socially-conscious comedies. It’s important to educate ourselves and pay our respects to the legends.

To me, you are a true multi-hyphenate. Having cut your teeth writing and producing, what is it about storytelling that you love?

I’ve been telling stories to my little sister and brother since we were kids. I used to put on puppet shows for her and improvise the WHOLE thing. I love telling stories. I think it’s because I loved seeing the smile on their faces. We didn’t have much, but we had our imaginations ya know.

A career in entertainment obviously involves a lot of ups and downs. What have you learnt about yourself through the process of failure?

There’s no such thing as failure. It’s just learning. I’m a learner. A slow one, but I learn. Damn, I can’t go one day without quoting Game of Thrones!

What’s been the biggest surprise about fatherhood?

Time goes by so quickly. So, being there — being present — is everything to me. Right now, my daughter is sitting next to me and I’m reading what I’m currently writing in this interview to her. I enjoy every second of it.

With the world being what it is right now, what does the future look like for you? What are you optimistic about?

I have no idea, dude. And I don’t really care. Life is a blessing. It truly is. We’re not promised anything. I’m not gonna worry about shit I can’t control. So, I’m taking it one day at a time. Writing. Developing my art and maturing. Also making sure the people who need my help get my help. We should all be checking in on our loved ones. You never know what they’re going through. So, if you’re reading this, you’re awesome and I hope you have a beautiful day. You fucking deserve it.

Judas and the Black Messiah is out now. Coming 2 America will be released via Amazon Prime Video on 5 March.