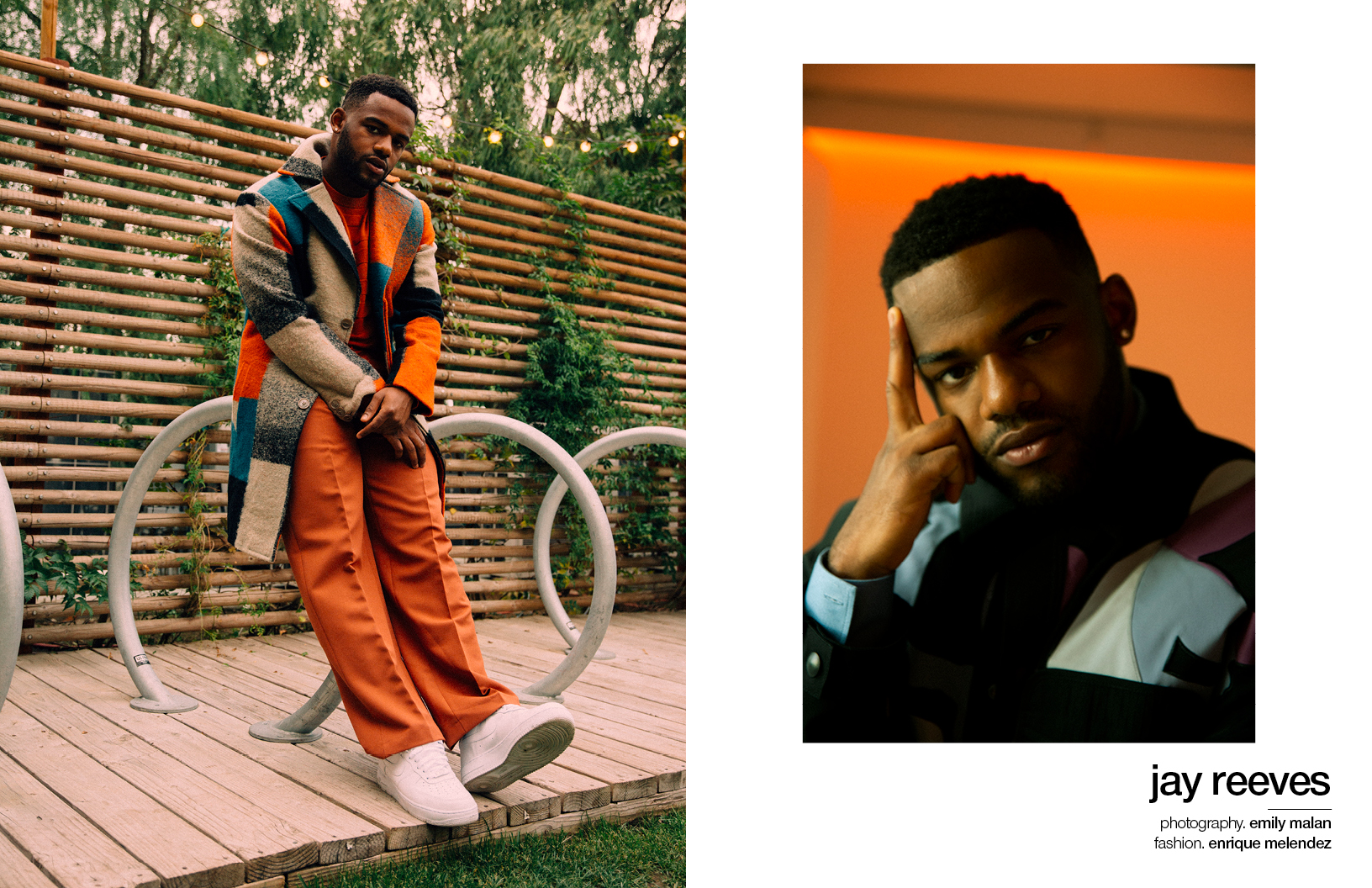 If you’re looking for a feel-good film to escape into during the long winter nights ahead, Safety, premiering December 11th on Disney+, may be just the warm and fuzzy blanket you need.

Inspired by the true story of Ray-Ray McElrathbey, who raised his eleven year old brother on a college campus, Safety promises football, family, friendship, a little romantic intrigue and, of course, the American dream. Hard work, tough coaches, a subplot about the struggle for sobriety, the precarity of losing it all — these narrative points coalesce to weave an uplifting rags-to-riches drama centred on Jay Reeves, who stars in the film as Ray-Ray McElrathbey.

Schön caught up with the multi-talented actor to talk about his real-life athletic endeavours, family, relationships on set and how the green juice at Lassen’s helped catapult his music career.

What first attracted you to the role of Ray-Ray McElrathbey?

I wanted to do this film because Ray-Ray’s story was so inspiring. Very seldom do I receive a script that gravitates toward my spirit so powerfully, and I remember feeling like I just had to get this role early on during the interview process. Ray-Ray had to take on such a huge responsibility at such a young age, when most of us are not yet fully aware of who we are. This is something that I had to personally deal with in my life, so being able to share my past experience and to combine that with Ray’s essence was magical. His struggle with having to support his family wasn’t too far from my own story, so I remember holding onto that sense of need throughout the process.

The story hinges on an intense fraternal bond. What was it like working with Thaddeus J. Mixson, the actor who plays your younger brother? How did you two develop your relationship?

TJ is amazing! He is one of the best scene partners and co-stars I’ve ever had, and his energy and dedication to the craft speaks for itself in the movie. I feel like children are the best actors because they still live in this world of imagination and pretend, so there was a lot of stuff that organically just came to this talented kid. There is also a sense of innocence that he carries that I highly respect and tried my best to nurture while playing his father figure on screen. 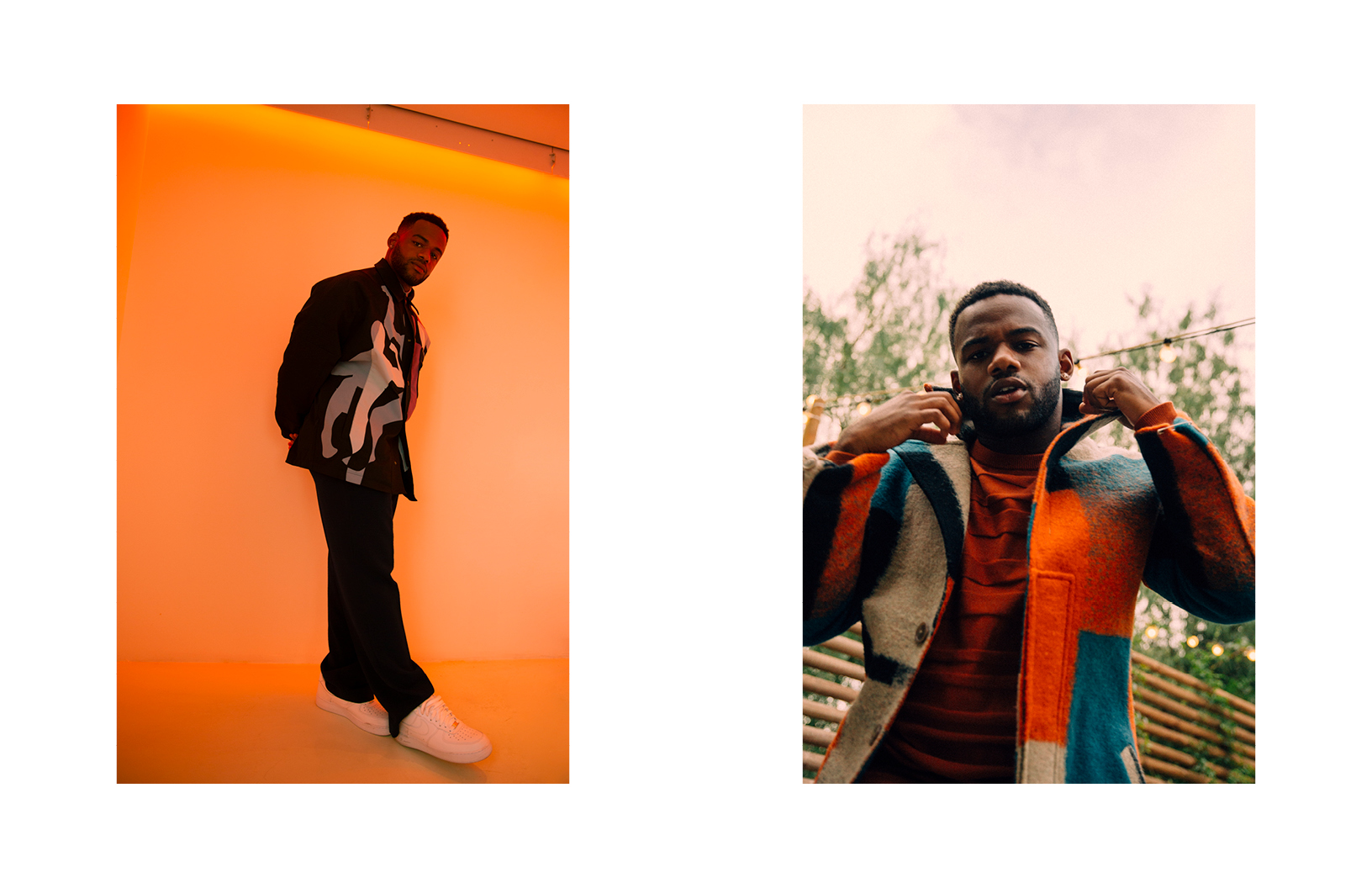 We did a little internet snooping and saw that the real Ray-Ray McElrathbey came to visit the set. Did meeting Ray-Ray inform your understanding of the character?

Ray did influence my understanding of how to play him by making his presence felt throughout the entire shoot. By being so close to him, I was able to pick up on the little nuances that made him an individual. From how he wore his shoes to how he put on his shirt, these little details helped me portray him in a way that felt true to who he is. As an actor approaching a role like this and playing a real person, I want to always honour whomever I’m playing along with their story.

What are the pressures of portraying a real person?

I mean, of course, there was pressure to portray Ray correctly, but my focus was honesty. I believe honesty will always allow an actor to really portray a character with heart. Ray was number one on my priority list, and I just hope that my performance is well received. What people forget when you’re playing a real person [is], not only do you need the approval of whomever you’re playing, but also approval from all those who know them in real life.

What was your favourite scene in the movie to film? Why?

My favourite scene in the movie was the big tackle in the Clemson and Florida-Atlantic game. We shot during halftime, and the excitement of shooting a movie in front of 80,000 people was a milestone in my career. Seeing and feeling that crowd stand up in my peripheral while shooting is an image that will never be erased from my brain.

Your first big role was in another football-connected drama, Shawn Scott on CW’s All American. What did you learn from this role?

The most important thing I learned while shooting All American is that there is no such thing as a small role. My part wasn’t the biggest on the show, but it was pivotal and it showed me how hard work can lead to maximum exposure. Many times people feel like if you’re not a lead on a show or a movie, you’re not really doing anything, when it’s actually the other way around. Without those memorable supporting roles, there is no lead, so I was grateful to be a part of it and it was a great experience. Shout out to everyone over at All American and the CW network!

Drugs are central to both your part in the CW show and the soon-to-be-released Disney+ movie: in All American, you played a dealer, while in Safety you play the son of an addict attempting to get sober. What are your thoughts on the way that these stories display drug use, dependency, and recovery?

You know, I’m glad this is a question, because I feel like both productions show a great contrast in how much a person’s life can be affected by drugs. You may not be the person directly using drugs, but it’s important to remember that that doesn’t matter. Things like secondhand smoke or lifestyle changes are all things that people deal with when drugs are introduced into the environment. For example, Shawn Scott, my character in All American, was a young man who lost his life because of what he was doing on the streets. When you take on these vices and these bad habits, you deal with what comes with it,  so I’m very glad to be a part of productions that shed light on these issues. It’s a needed discussion in today’s world. 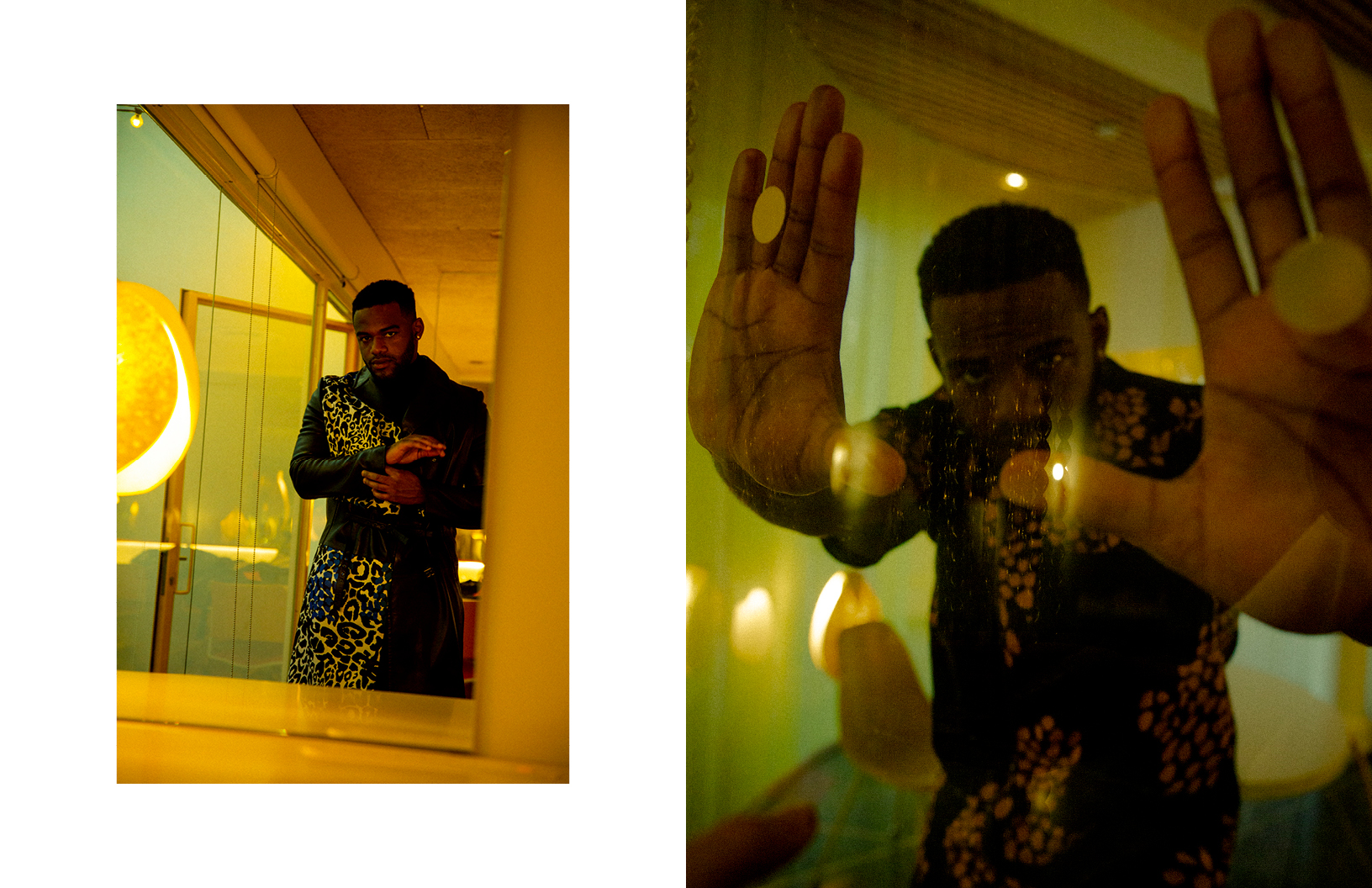 Do you play football off-screen? What’s your personal history with the sport?

I did play football off the screen. I don’t participate as often anymore because I’m usually boxing, or doing something else, but I even went on to win an LA City championship ring at Fairfax High School, so I’m pretty versed in the sport. Let’s just say I’ve been waiting to showcase some skills…

You are also set to release Hip Hop/R&B music later this year. Can you tell us anything more about that?

I do have a few projects I’ve been working on, and I can’t wait to share them with the world. I’ve been working with some pretty talented producers and engineers, so I’m excited to see what we can create without having that big label push, while organically building a fan base.

I first got into music by meeting Paul Stewart while at a grocery store shift at Lassen’s Deli and Juice Bar. Paul Stewart is one of the founders of DEF Jam West Coast, and he came into my location for a drink and we got into a conversation about music. I sent over the only song I had completed at the time, and soon enough we were working together. Paul got me started in this whole thing and is a big inspiration of mine, as well as some of the artists he helped discover. I’m a heavy old school Rap and R&B listener so I just pull from those inspirations.

Besides playing music and acting, where would someone find you on a typical Saturday?

On a typical Saturday, you can find me at the Renzo Gracie Los Angeles Muay Thai and Jujitsu gym. I’ve built a community with many athletes there, and they have become like family to me.  I’m usually there with the guys getting into it while working to keep my body in shape.

I am looking forward to more work! For me, I’m a workhorse, so I’m looking forward to more opportunities and even more challenging roles. Working with a company like Disney allows you to see what’s truly possible in this world when you have a vision and a plan. What is next for me is to just continue doing, executing my vision and plan in that order. I hope to have more dreams come to life in this new decade. 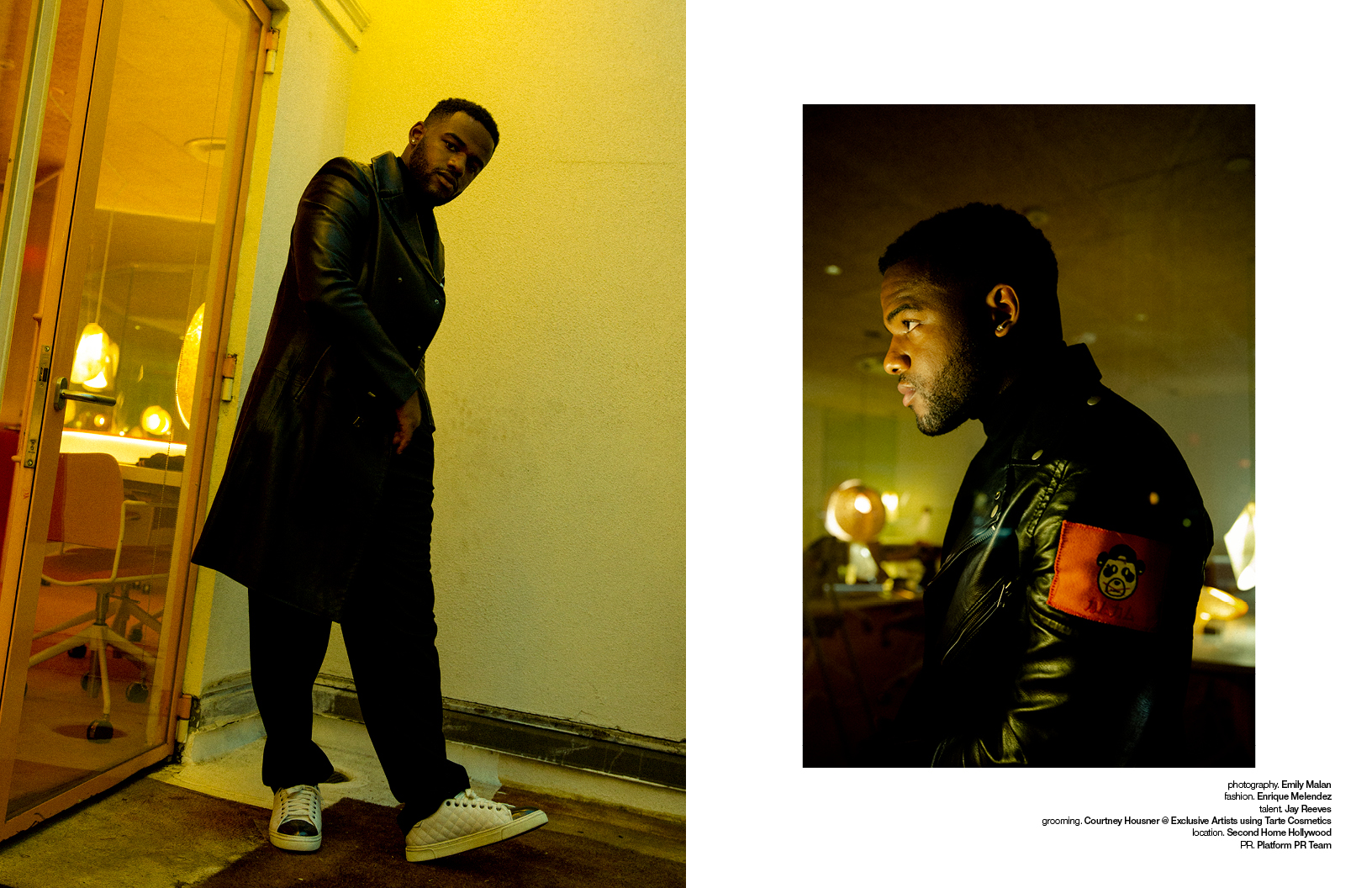 Safety is currently streaming on Disney+.