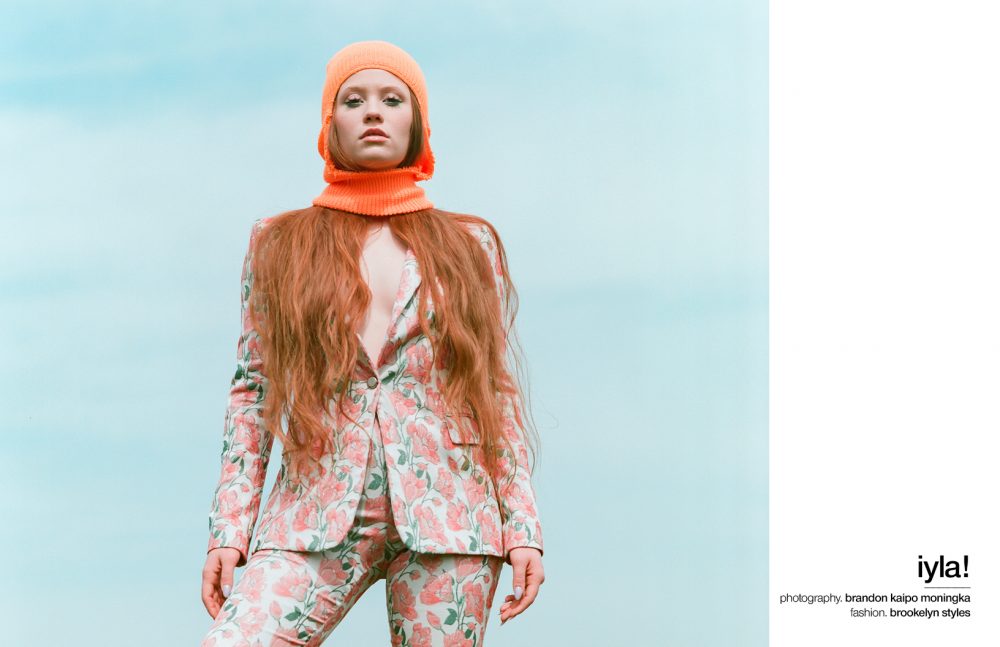 Los Angeles native Iyla Blue, now best known as simply Iyla, is taking over the music scene by storm. With her unique fusion of R&B, soul and pop, Iyla is redefining the genre with sense and sensibility — and doing so in her own terms.

Her debut EP, War + Raindrops, released last October, has been garnering rapt attention for critics and fans in its quasi one-year lifespan. With love as a familiar thread, in the five-track offering, the titian-haired songstress unapologetically demonstrates the beauty in pain and woe through longing metaphors, deep vocals, and airy instrumentals — all accompanied by stunning visuals.

Changing the norms and shifting the paradigms, Iyla is more than ready to change the face of R&B — or rather offer her own alternative take. Schön! caught up with the artist to talk about her new video for “Flowers,” her avant-garde approach and musical journey, why she decided to shine a light on mental health awareness with “Shampoo” and the continued visual representation of War + Raindrops. 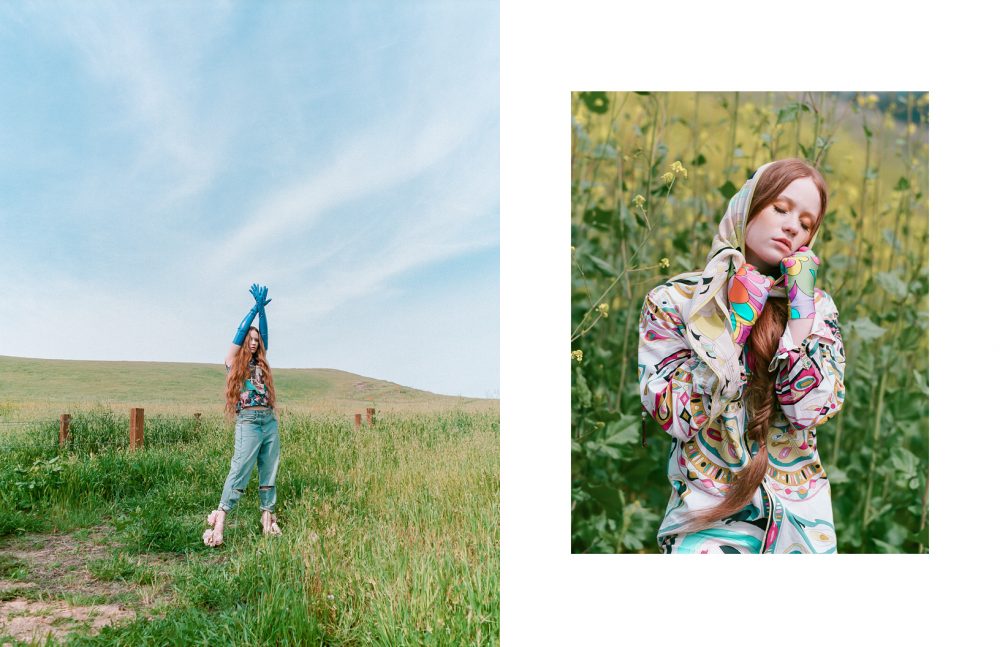 First of all, Iyla Blue, or Iyla now, is your stage name. Why did you decide to go for a stage name rather than your given name and how did you come up with it?

I decided to go by Iyla while on the journey of creating the music. Iyla means moonlight, which fits me very well — being that I’m a night owl — and it incorporates the letters of my given name Isabella. I also like that it ends in L.A., which is where I’m from.

You come from a musical family, your dad being a choir director at church. When did your interest in music started? And when did you began to see it as a feasible career option?

Since my dad was a choir director, and a lot of my family sang in church choirs, I was around good vocalists since before I can even remember. Every family gathering involved people sitting around the piano singing and playing. I knew music was what I wanted to do at around age four when I would sit on the piano and sing for my whole family. I always loved to put on a show.

Being born and raised in L.A., how does the city influence you creatively? Do you ever see yourself leaving?

Being born and raised in Los Angeles has really shaped me into who I am today. I grew up surrounded by such a diverse group of insanely talented people in and completely outside of the entertainment industry and had access to music and dance programs that definitely helped inspire my creativity. 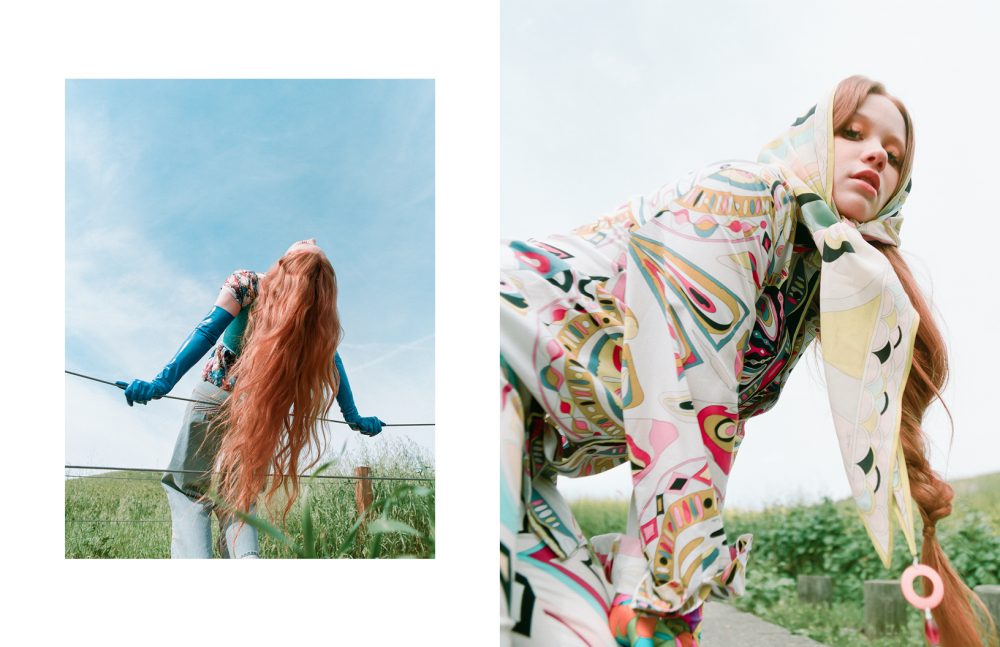 What were your musical influences growing up and now?

I’ve always been inspired by vocalists who sing their truths and express themselves with power and grace and texture and delicacy. My favourite singers are India Arie, Nina Simone, George Michael, Al Green, and Sade.

War + Raindrops is your debut EP. Can you tell us about the process of working on it until the release?

By the time we released War + Raindrops last October, my producer Kadis and I had worked for almost four years to cultivate and develop the sound we saw for me as an artist. War + Raindrops came out of me finding myself through years of discovery and experiences. It’s a true reflection of my life up to this point, and I’m proud to have it out there and honestly kind of surprised and humbled and really happy to have it be received in the way that it has been over the last six months.

Your music falls into the R&B category but it certainly pulls from other genres and offers a bit of an alternative edge to contemporary rhythm and blues. How would you describe it?

I’m inspired by so many different genres of music, so describing my own genre is sometimes difficult for me to pinpoint… but right now I would describe my sound as soulful pop R&B with some heavy jazz influence.

Even if from an unapologetic stance, all the songs on the EP seem to tackle love in a way. Where did you look for inspiration when writing it?

When it comes to writing songs about love, I always want to challenge “the norm.” It’s important for me to show a side of love from someone who is learning about love and its ups and downs. War + Raindrops highlights the unexpected love story, and all that comes with it. 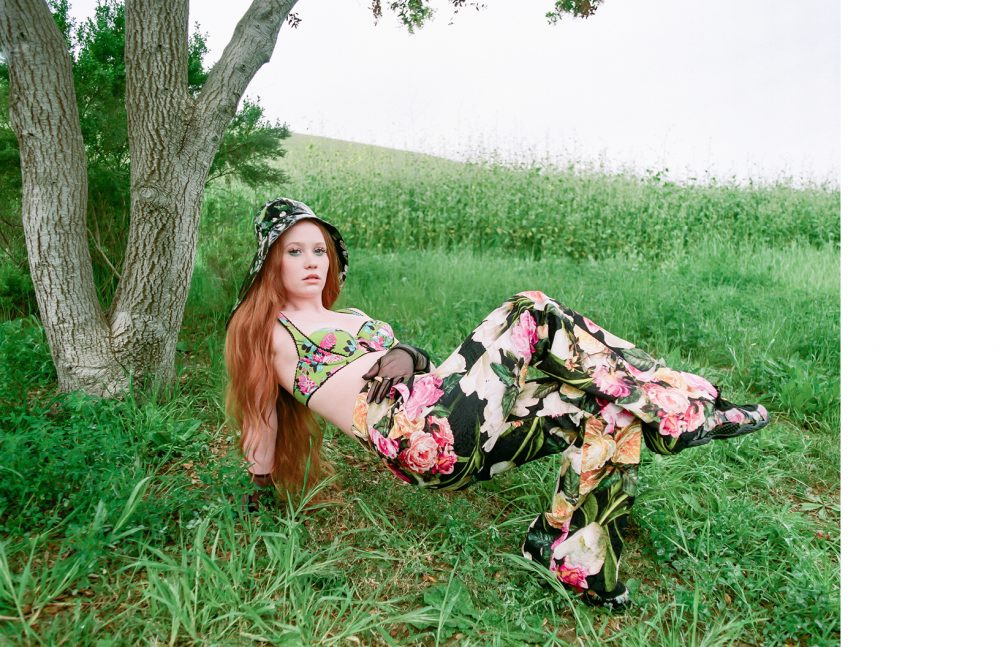 Off the EP, “Juice” especially has had massive success, the video even raking up more than four million views on YouTube at the moment. Did you anticipate it in any kind of way or were you completely taken aback?

The success that “Juice” has had is mindblowing to me. Sometimes as creatives we can be so invested and passionate, that we forget to come up for air and take in all of the special moments. I’m trying to remind myself to do that every day, and seeing the love and support on “Juice” keep growing and growing, just fills me up with joy. I’m so grateful for my supporters! They’ve changed my life.

Speaking of videos, you’re creating a very defined and personal aesthetic with both “Juice” and “Shampoo” and now also “Flowers.” How much importance do you place on visuals?

I believe that being able to create videos that accompany the music allows artists to tell our story. A visual to me is just as important as anything else surrounding what it means for me to be Iyla; It’s my music coming to life.

All your videos are directed by Embryo. How did you link up with and what’s the secret to your creative synergy?

Getting the opportunity to collaborate with Embryo is something that means a lot to me as an artist. His vision is truly inspiring, and so is his ability to listen to my ideas and then take them to a whole other level. The third piece of the visual puzzle is my fabulous stylist Brookelyn, who has the most incredible eye, and somehow still continues to outdo herself with every look. It has been easy for us to find our magic working together on the videos and photo shoots. I think it’s because we all allow each other to be our authentic selves, unapologetically. 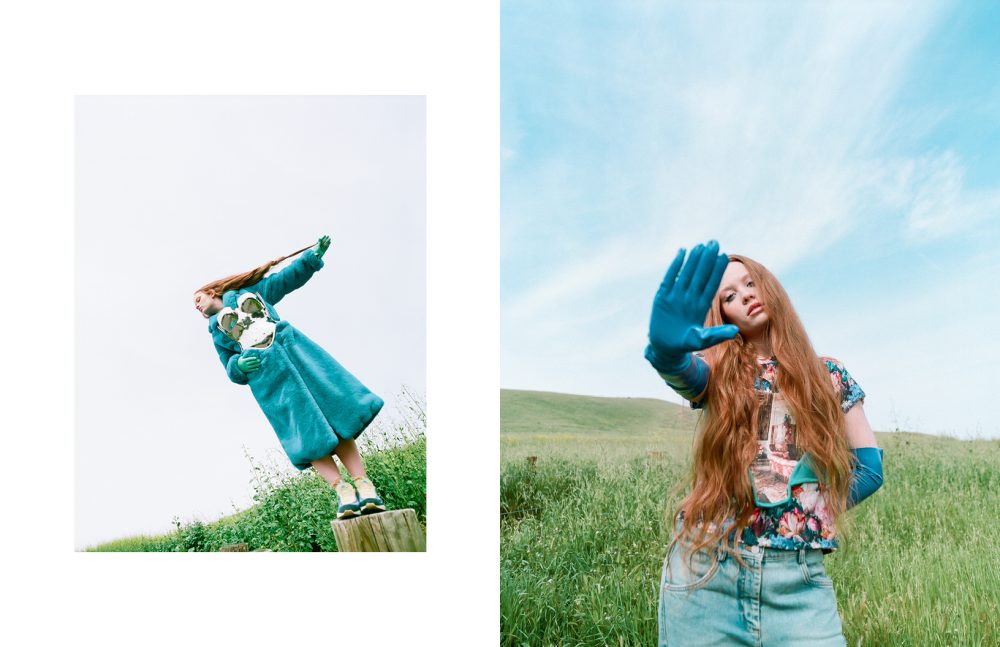 With “Shampoo” you guys decided to tackle suicide prevention, an extremely sensitive subject, and, in doing so, you paid homage to the likes of Alexander McQueen and Chester Bennington. How did you come to that decision?

It’s extremely important for me to spread messages that I’m passionate about in pretty much everything I do. The visual for “Shampoo” really highlights mental health awareness. My intention was to spark a dialogue with the viewer that encourages checking in with the people you love. It was also significant for us to pay homage to artists like Marilyn Monroe, Chester Bennington, and Alexander McQueen because suicide within the art and entertainment industries are way too common and needs to be acknowledged and discussed. These artists have given us so much, and we often take, consume, and criticize, without remembering they are human too. I find it super key to be honest about what we’re all going through because that can inspire others to be honest with the struggles they are facing too. We don’t have to be perfect. We aren’t perfect. We will never be perfect. But we are worthy of greatness.

The EP has five tracks and three vids so far. Are you planning on releasing more videos for those songs?

What was the inspiration behind “Flowers” — both musically and visually?

One big theme in “Flowers” is the disconnect between material things and genuine love. The idea that flowers are beautiful, but a real honest relationship is better. I don’t want your flowers or other gifts in place of an apology. I want you. It’s always important for both my creative director, Embryo, and I to tell the story of the song’s message in our visuals. Another one of my favourite themes of the “Flowers” music video is the growing and shrinking element inspired by Alice In Wonderland. When I’m given love and affection I grow, however, when I’m presented with material items, I shrink. Ultimately, I want the viewer to decide what “Flowers” represents to them.

Flowers, as in actual flowers, seems pretty relevant to this EP. In fact, they take centre stage in the EP cover. What would you say the symbology of flowers is for you?

Flowers tend to be beautiful and delicate plants, that need to be planted, watered, and taken care of until they blossom. I worked for four years with my producer Kadis curating my sound, and growing personally. Releasing War + Raindrops took so much dedication, love, and watering. As my first project, it feels like my first blossom into the music industry.

Changing subject completely, I’ve seen you share some mutual love with Kehlani on social. Would you be up for a collab?

Getting support from an artist like Kehlani means the world to me. I’ve always admired the honesty in her lyrics and the way she tells a story as a powerful young woman. I would love to work with her on a song one day… that would be crazy!!! 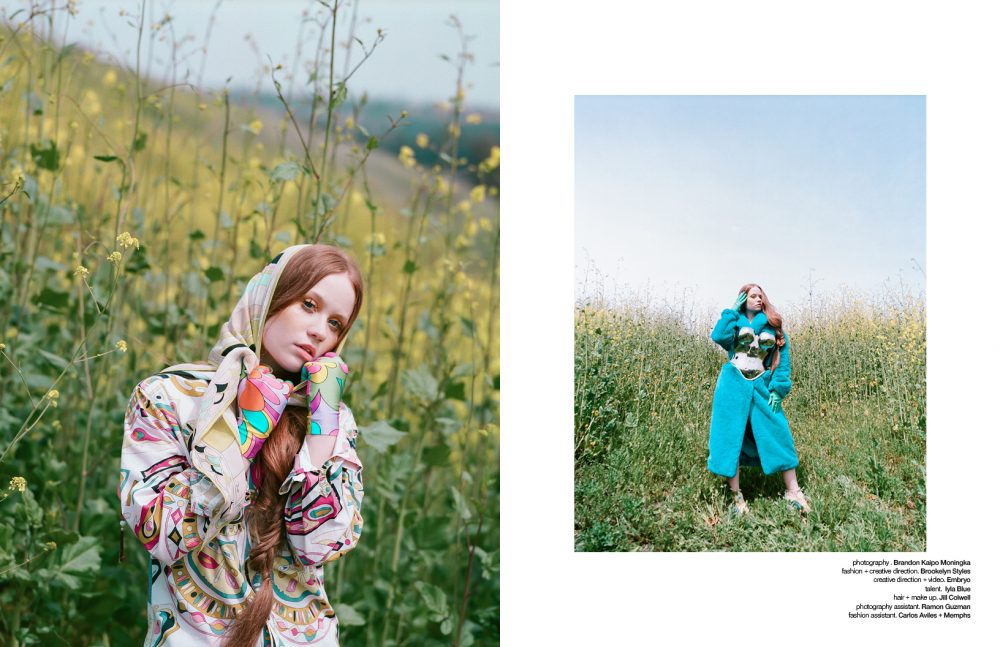 In the long term, do you have any career milestones you want to achieve? For example, is winning a Grammy ultimately something that motivates you?

One of my biggest goals right now is to create and put out my first full-length album. Accomplishing something as significant as winning a Grammy would also be incredible… being acknowledged and encouraged by your peers is always special! But at the end of the day, as long as I’m able to create music and visuals that mean something to me, I’m living my dream! Getting love from fans and connecting with people all over the world will always motivate me the most.

Now that the EP is out. Do you have any other projects in the pipeline? Are you back in the studio or planning to keep touring?

I would love to tour and get to perform in as many places as I can. This spring I’ll be shooting a couple more videos to complete the visual representation of War + Raindrops. Then in the summer, I’ll be back in the studio to finish my second EP, which will come out in 2019!

The three most important things to me are my family, my music, and my message. I grew up in a family of human rights activists, and I will always fight for what I believe in. My goal is to set an example for young people to get involved in their communities, as well as outside of their communities. As human beings, we have so much love to give, and I hope to spend the rest of my life spreading that love to everyone who listens to my music or connects with me in some way. Making people feel like exactly who they are is good enough, is what matters to me most. Be yourself! It’s beautiful!