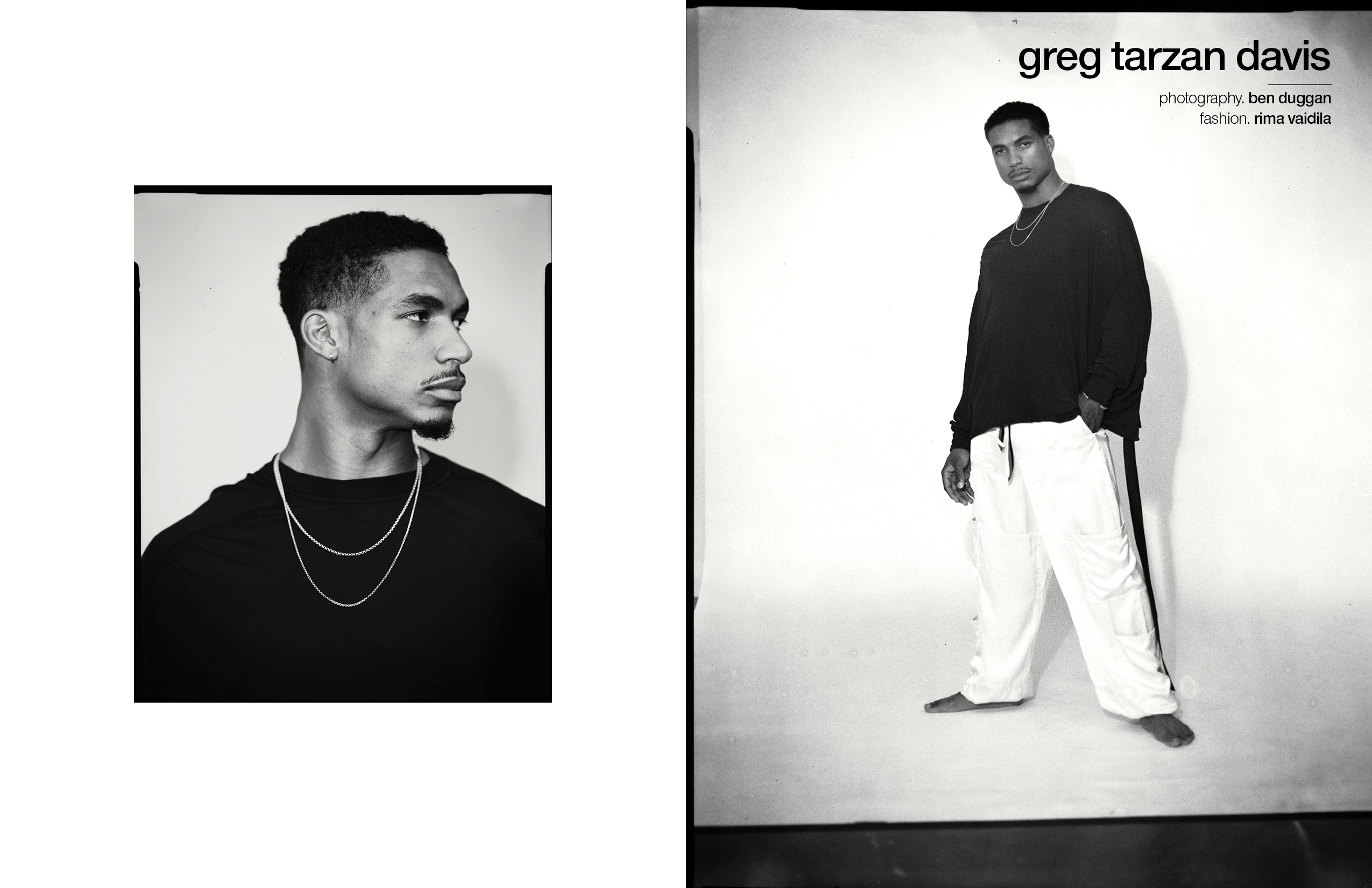 Greg Tarzan Davis can truly say that, if you fight for them and work hard and consistently, dreams really can come true. Why do we say this? Because if there is one thing Tarzan can be proud of, it is earning a living from the profession he dreamed of pursuing since he was a child — acting. His hard work and perseverance recently brought him to the cast Top Gun: Maverick, sharing the screen with cinema legends Tom Cruise, Jennifer Connelly and others. Schön! talks to Tarzan about his role in the film, his beginnings in acting and more.

First of all, congratulations on Top Gun: Maverick. What has it meant to you to be part of this movie?

It’s been a surreal feeling being a part of a legacy that the original Top Gun has, and mind-blowing to think I am a part of shaping up another legacy with Top Gun: Maverick.

How would you describe your character Coyote?

Coyote is a hot shot pilot who is one of the best in the Navy. He is laid back and chill… gets along with everyone, but has a dangerous side that can come out if provoked. Although he is the best, he feels that he always has to push and prove himself, which [can] sometimes get him into some trouble. 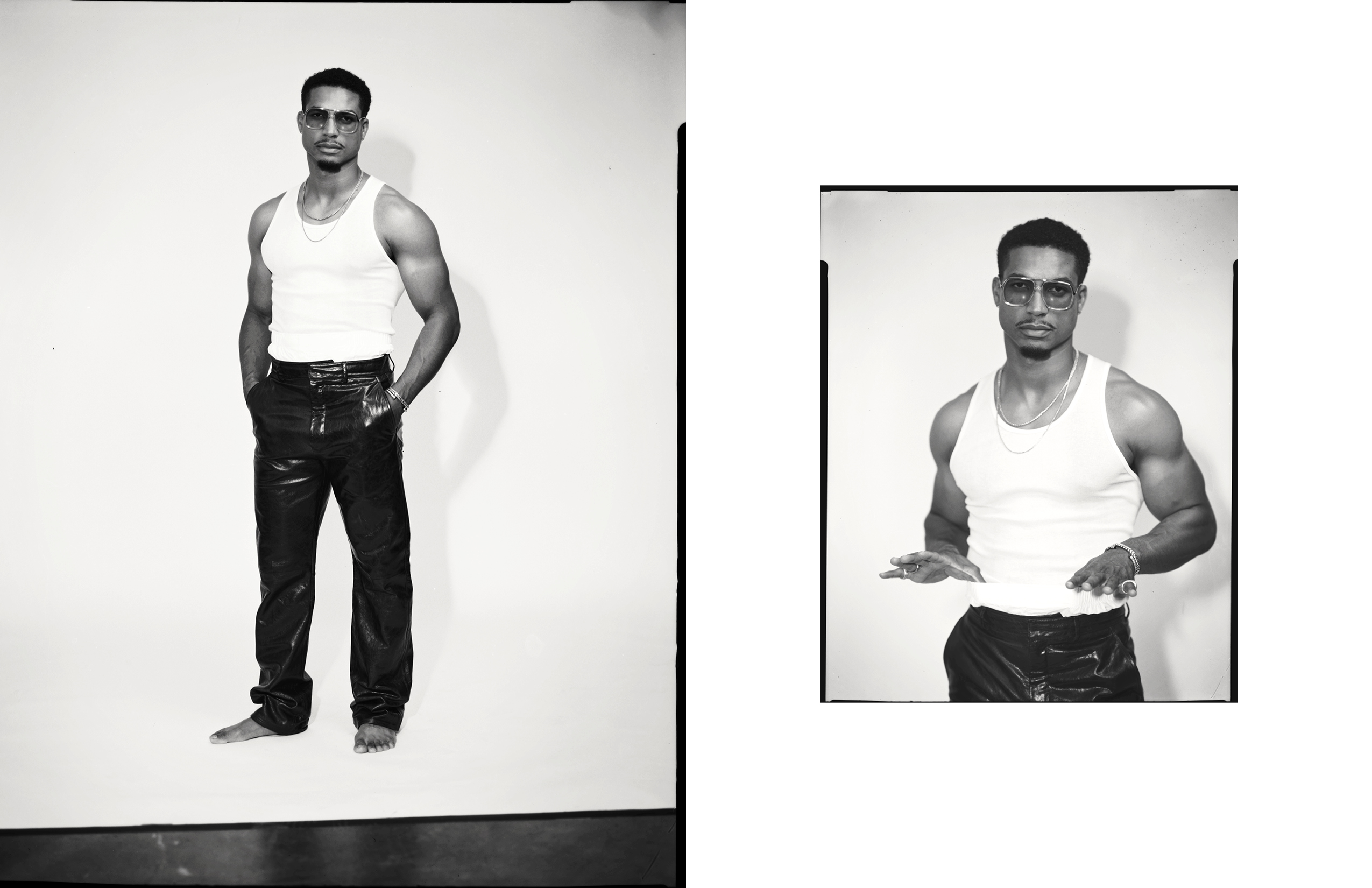 When did you realise you wanted to be an actor, and from there, how did you get started in the world of cinema and acting?

I always had an interest in becoming an actor since I was a child — the question I had was how to become one. It wasn’t until later on in my college years that I decided to become an actor. I submitted myself for different roles until I was called in for my first audition, which was in Chicago. When I received the audition, I was living in New Orleans. That began my journey of driving back and forth from New Orleans to Chicago and the beginning of my acting career.

Apart from good acting skills, what do you think a person needs to have in order to succeed in the industry? Specifically, can you name any characteristics of yours that you think have helped you advance in the industry or that have set you apart from the rest?

There are many other things besides acting that can help you in this industry; some are being a nice person. On a film set, you are working with people [on] 12, 14, sometimes 16 hour days for months on end, and what everyone wants to know when hiring you is, can they stand to be around you that long? Another thing is being a hard worker. You need to be able to outwork the competition, but in creative ways, because the answers to your questions aren’t always in front of you. I believe my introduction to this industry was me having to drive to and from Chicago from New Orleans in order to book my first acting gig. That is how you think out of the box. 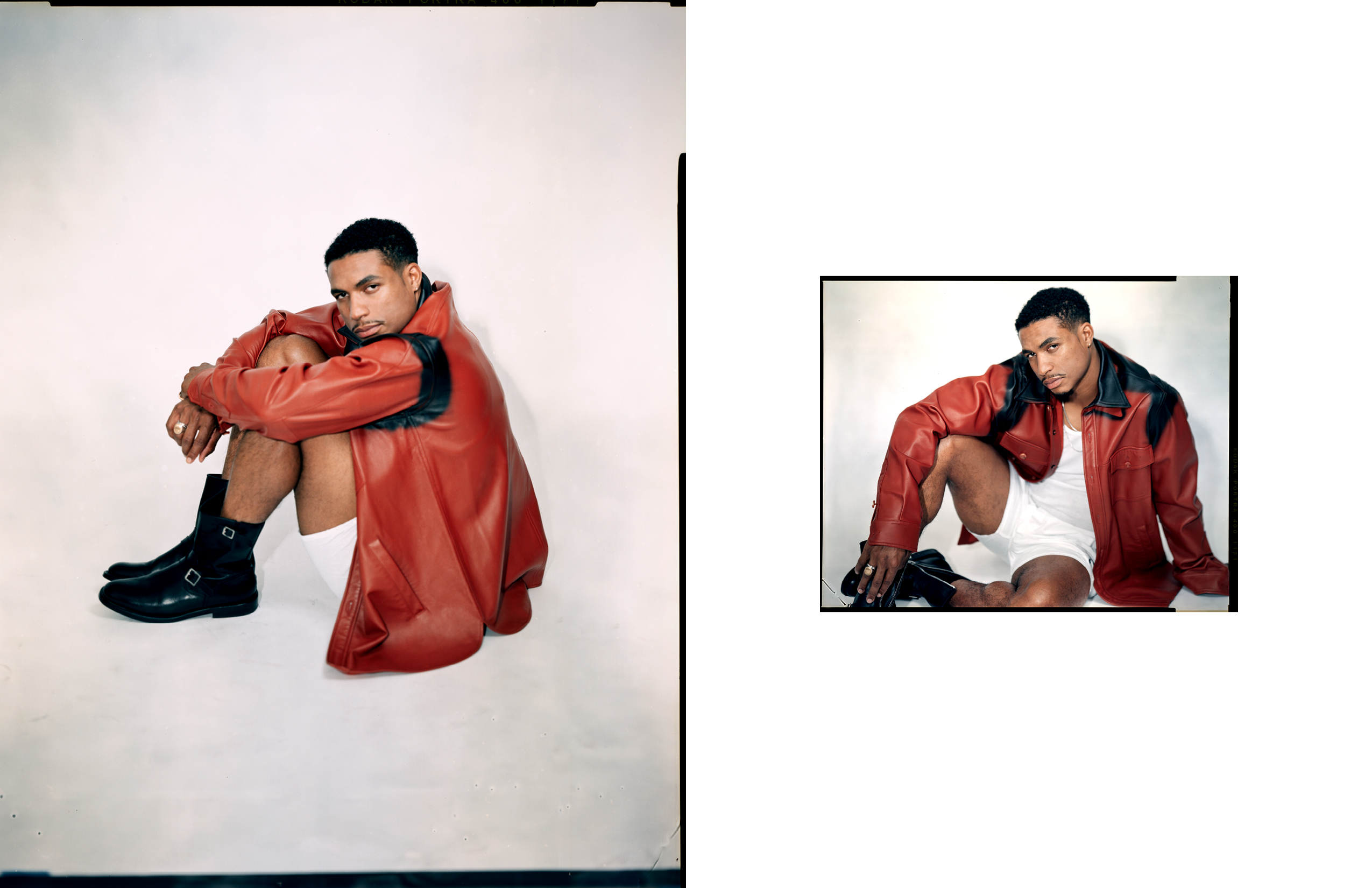 Among the cast of actors and actresses in the film are Tom Cruise and Jennifer Connelly. What has it been like working with them? Any interesting stories to share?

They have all been very helpful to my young acting career, providing guidance and experience that I did not have. They are all very supportive of me, and I thank them for that. I can’t tell you how thankful I am of them for being so generous to me and setting the example of how to conduct myself in this industry.

We recently saw you and the whole team at the last Cannes Film Festival. Was it your first time there? What was the experience like?

It was an overwhelming experience for my first time. It felt like it all happened so fast. There were so many flashing lights, my energy was on thousands, sensory overload was happening. I am still trying to process what happened through the many pictures and videos that were taken.

Now that we mentioned the Cannes Film Festival, we saw that you decided to take a stylistic risk and stand out from the rest by wearing a peach suit by Dolce & Gabbana. What roles does fashion play in your life? Do you have any fashion designers or brands that you particularly like?

I love fashion because it’s a great way to express yourself without saying a word. When I was planning my outfits for this press tour, that was my intention, to speak when I entered a room without me opening my mouth. The clothes I wear are based off [of] my mood. I would like to work with all the brands at some point because, like I said, clothes are based on my mood and what I’m trying to say and each brand speaks something different.

After Cannes you were in London, where you were able to meet the future King and Queen of England. Iconic! What can you tell us about that moment?

I can tell you both the future King and Queen are very disarming people. They made me feel as though I had known them for a long time. We had a nice conversation, and we plan on watching my next movie together, Mission: Impossible 7. 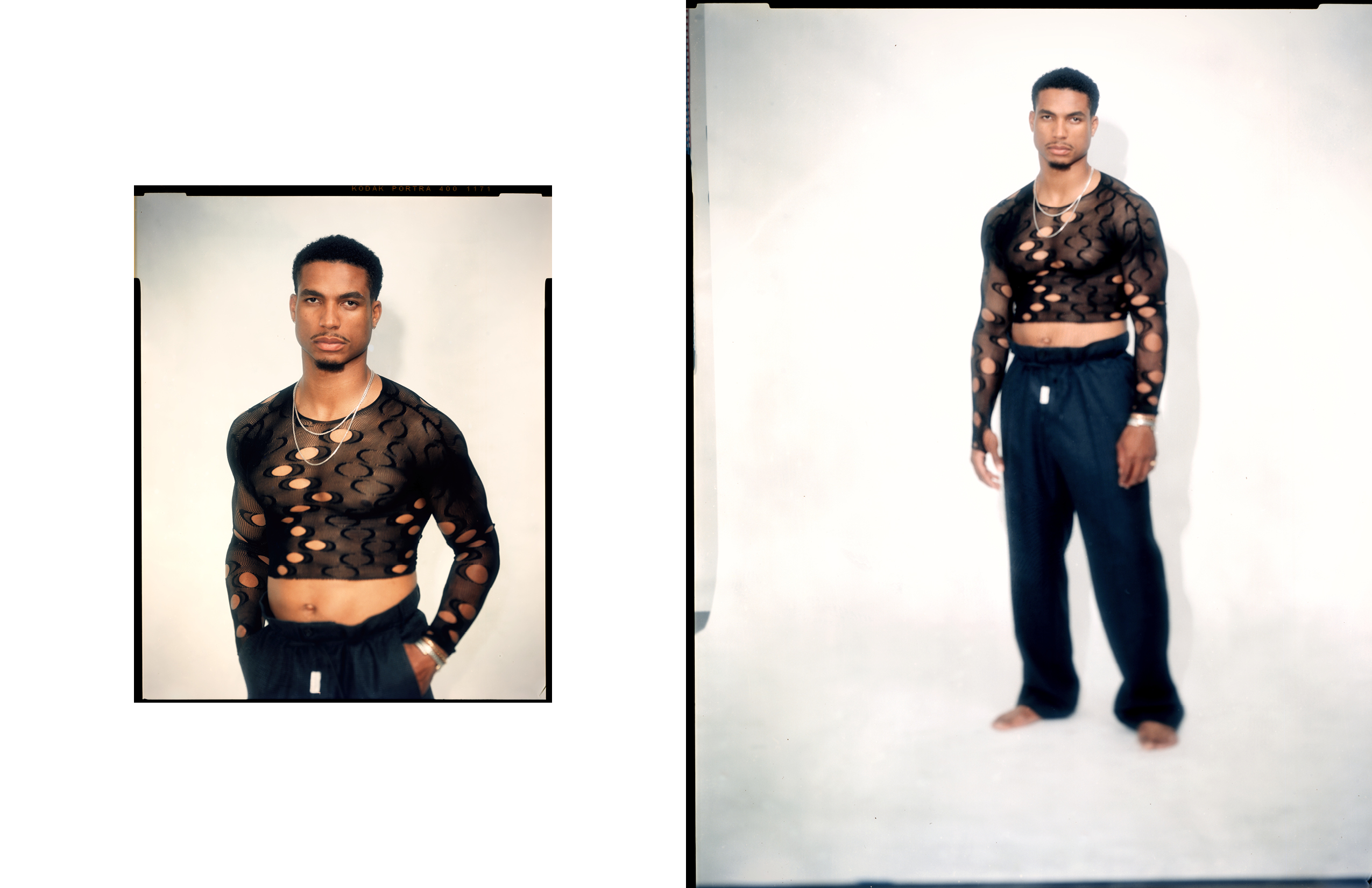 Now that you are immersed in the presentation of the film around the world, what do you do when you have a day off?

When I have days off, I like to travel, or go to the movies, have game nights and spend time chilling with my friends. When I am out of work mode, I try to completely let work go and be in the moment with the people I am with and with the things I am doing so that when I get back to work, I will be fully energised.

There was a time when you used to post funny videos on Instagram and Vine under the pseudonym “The Real Tarzan”. What’s your relationship with social media now?

Initially, social media was something for me to entertain people. Now, I use social media to interact with my fans. I think it’s a great way for them to get to know me, but also as a way for me to get to know them. I also love the fact that I can bring them in on my journey. A lot of times people blow up big leaving others wondering how they get to where they are. I was one of those people always trying to figure out how the person I looked up to make it to the spot they are in. Now that I am on the way up, I use it as a way to include them on the journey, make them feel as though they are on the journey with me, demystify the process and show them they can do the same thing.

What are some of your goals as an actor?

I have a lot of goals and every time I reach one goal another would be added. Some of them are to win an Academy Award, start my own production company, have my own franchise, to name a few of my goals

Why should our readers go to the cinema to see Top Gun: Maverick?

We as filmmakers put too much work into this film for it not to be seen in the theaters. If you want to really go on a ride, the best place to see it is in a cinema, with people. It’s an epic journey designed to be seen on the big screen. If you want to feel like you were in the cockpit, watch it in the cinema.