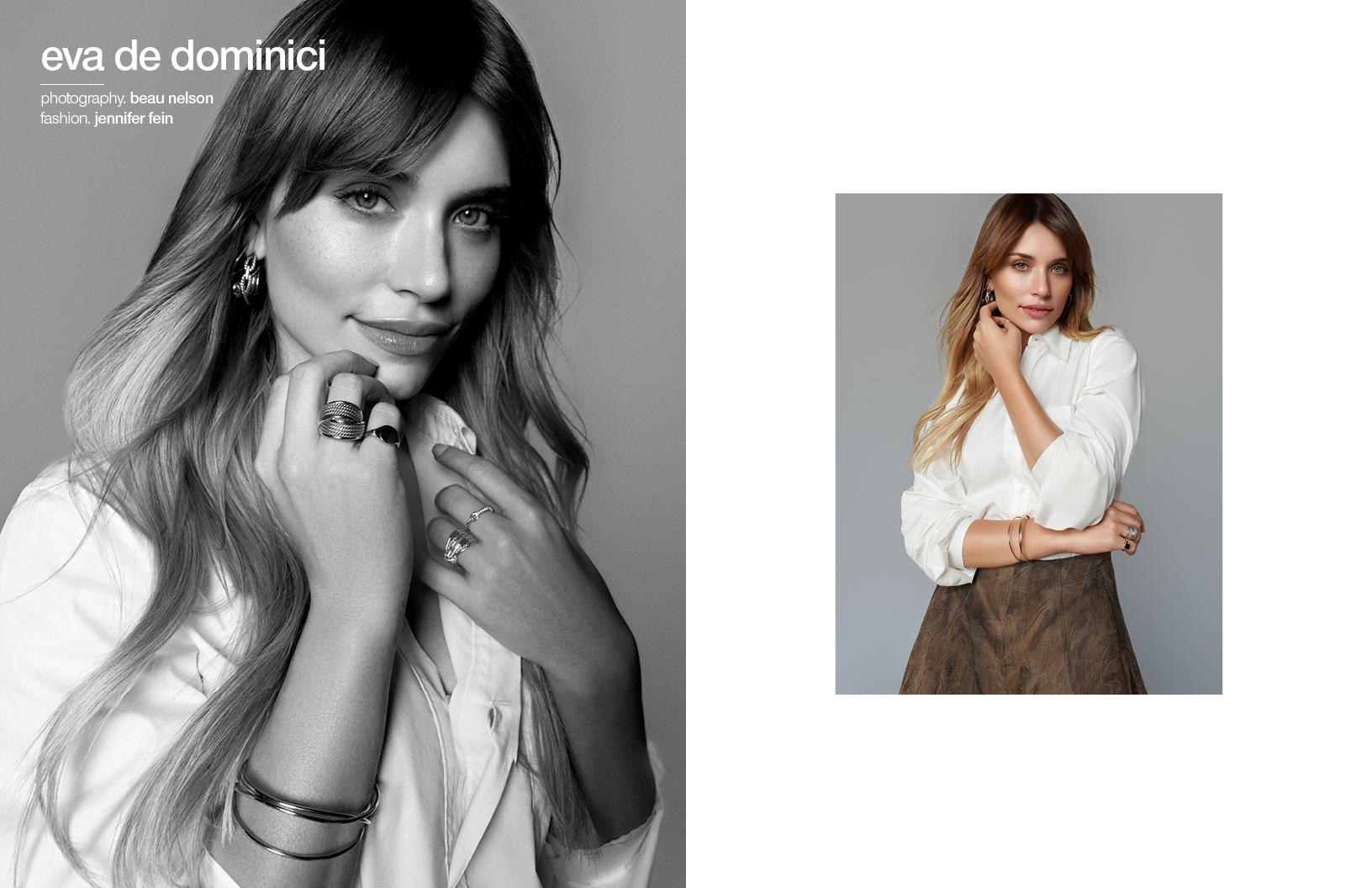 Summer is in the air. The sky is bright, flowers are in bloom — and Fox announced that we will be seeing more of talented ray of sunshine Eva De Dominici. A Buenos Aires native and actress-cum-model, the Argentinian has radiated star-quality since she was a child in 2005. Her ascent from television comedies to American crime thrillers has garnered a diverse and loyal following, who were delighted in May when Fox announced the imminent production of The Cleaning Lady‘s second season. This meant the return of Dominici’s formidable character, Nadia Morales.

Wife to mob boss Arman Morales (Adan Canto), her fiercely determined and uncompromising persona has earned her the villainous nickname ‘Lady Macbeth’. Not only does Marales encourage her husband’s gangster ways, but her mastery of manipulation has fascinated watchers. The role precedes a roster of dynamic parts in shows and films like Hawaii Five-0, Blessed Dream and The Fragility Of Bodies, the latter of which saw Dominici win the Premios Martín Fierro (a prestigious Argentinian trophy) in 2017. Join us as we sit down with the star to talk about her acting technique, thoughts on The Cleaning Lady and what it’s like navigating a crowded industry.

You’ve worked on both Spanish and English speaking series and films. Do you think your approach to acting changes with the language? How so?

English has become my second language and it’s now a much more comfortable place, so I can totally say it’s no longer an unsafe territory for me. But it’s still somehow challenging, because when it comes to dealing with hard emotions in my own life, I naturally express myself in my first language, which is Spanish — the language I have spoken since I was little. It’s like returning to my childhood in Argentina. But I actually feel proud of speaking Spanish, English and Italian. Since I never attended a bilingual school when I was a child, I decided to start learning English a couple of years ago, and I am still discovering the language, which I think adds something fresh to my acting. I often say out loud everything in Spanish when I work on my lines to make sure I am understanding and expressing the meaning of every single word I am delivering.

Who are some Argentinian actors or actresses who inspire you? 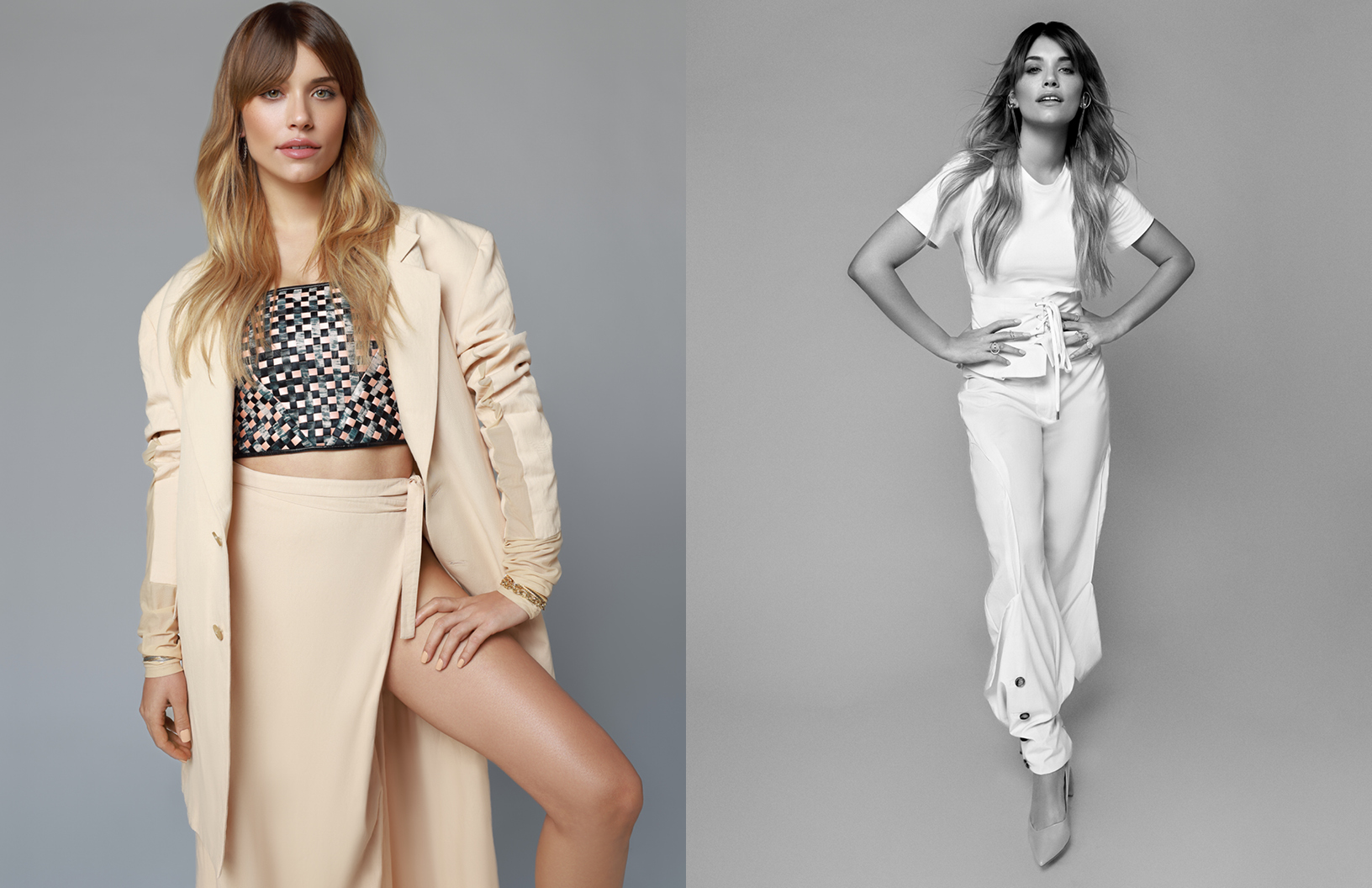 You began acting as a youngster in Disney Channel and Telefe shows geared towards children. They’re worlds apart from the crime thrillers you’ve recently worked on. How did you navigate the transition to more mature roles? Was it easy to break into a different genre?

Everything had to do with my own growth, and of course with age, because I have worked as an actress in TV since I was nine years old. Once I knew I needed a better understanding of the complexity of a human being, I started to take more in consideration that things are not white or black, that most wonderful discoveries happen in the grey areas. I have always known I wanted to be in front of the camera, or on a stage but as years went by, I discovered that I really wanted to be an actress, so I started taking different acting classes with older people because I knew I needed a change in my acting in order to get a role in a new type of genre. Of course I feared that would never happen, but I took the risk and started pursuing my dreams and working on them. Even though I consider myself an incurable dreamer, I am also a very determined and pragmatic person. I know that in order to take even the smallest step forward, I must work really hard.

Let’s talk about your role as Nadia Morales in The Cleaning Lady. What attracted you to the part?

When I got the audition, I was told that even though Nadia was the male lead’s wife, it was a small character. When I read the sides, I laughed a lot. Nadia was so different from me. Nadia was FUN, and I am so boring compared to her. Her first scene being discovered by Thony in a very vulnerable situation after partying all night, her freedom and her surprising attraction to Thony caught me right off the bat. I felt that Nadia[‘s story] was a very unique and contrasting world among the story of a sick child, of economic struggle, immigration injustice, crime, etc. I felt she had a different colour in the story and that was going to make the character special for me. I immediately felt that Nadia could be much bigger. I had so many exciting elements to work with for the character. I really wanted the part.

What was it like joining the cast? How did you ingratiate yourself?

I joined the first season from the beginning, from the pilot, so it wasn’t like I was joining a group already integrated. But I started with a small character and within the episodes Nadia started to grow a lot and to take more importance in the storyline. I remember when we had the second table read over Zoom, I was surprised — the showrunner sent me a text saying that Fox really liked my work and she said they were gonna write fun things for the character, and they did. That was a good alert and an exciting beginning for me. 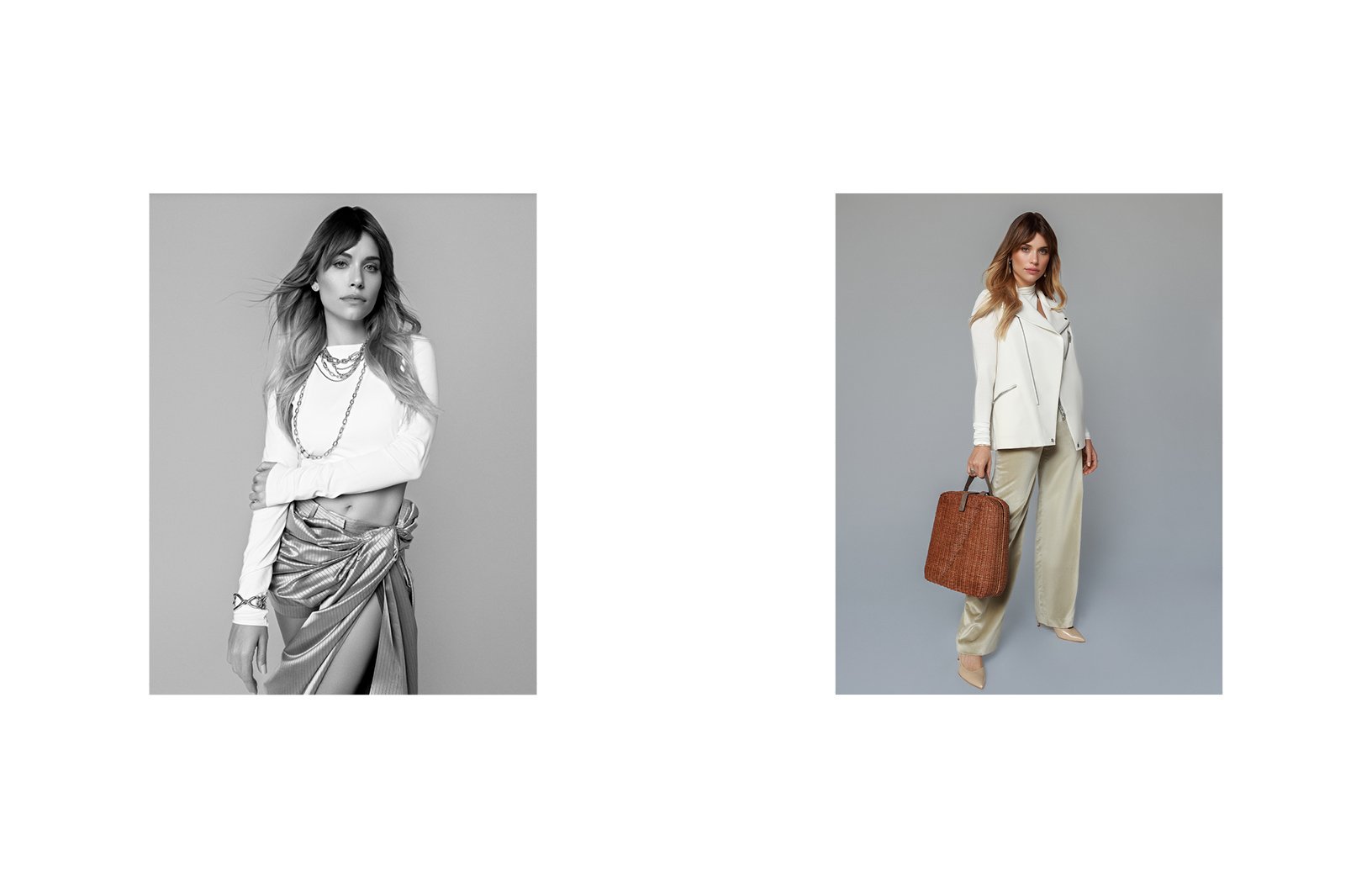 Nadia’s been described as the ‘Lady Macbeth’ in her marriage with gangster boss Arman Morales. Do you agree with this? Is she a criminal mastermind, or something else entirely?

100%. Working with my coaches, I started to see Nadia as a Lady Macbeth, and the writers at the same time, without me being aware of it, were writing Nadia thinking of a Lady Macbeth figure as well. Nadia is much more than a simple support to Arman. She is someone who encourages her husband and sometimes pushes him in order to get what she is convinced they deserve. She has a plan. She knows what she wants and she is focused to make that happen. The problem appears when Thony enters the picture and Arman starts listening to Thony more than to Nadia, which makes Nadia feel she is losing total control over him, and that risks her plans with him as a team. I really like that she knows how to keep herself in check when it’s called for, because her plans are first.

Are there elements of Nadia’s personality that repulse or fascinate you? What are they?

What I love and admire about her is that she has a thrilling…ambition and autonomy. She is a woman who wants it all and doesn’t even try to hide it. In times of emergency, she handles things in a smart way. Nadia comes from a difficult upbringing and I cannot say that she does not suffer with all the pressure on her back, but at the same time, she never lets anyone making her feel intimidated, not even among a lot of men in power; she indeed elegantly navigates a man’s world in the Las Vegas crime scene and she seems not to be afraid of anything. What I don’t like about it is that in order to achieve that, she has extreme stress and tension, she cannot close her eyes for a very second because she’s never safe. She knows that she works for a very dangerous man and that she is involved in the crime world with all it takes.

The show exposes how immigrants can be mistreated and preyed upon by criminals. What do you think about its portrayal of this?

I think it is a very strong and important topic to be brought up to the forefront. I am an immigrant, but with privileges. The show exposes a situation in which a lot of immigrants are treated as people with no dignity at all and are pushed to be in a very hard situation where they have to face illegality in the country for one or another reason. But it’s a complex subject, and I am not an expert. I hope this will improve in the near future. I really believe in the power of communication, because when people start talking about certain problems that cannot wait any more time [for them] to be solved; when they start feeling empathy, that’s when they start to raise their voices and demand a change. 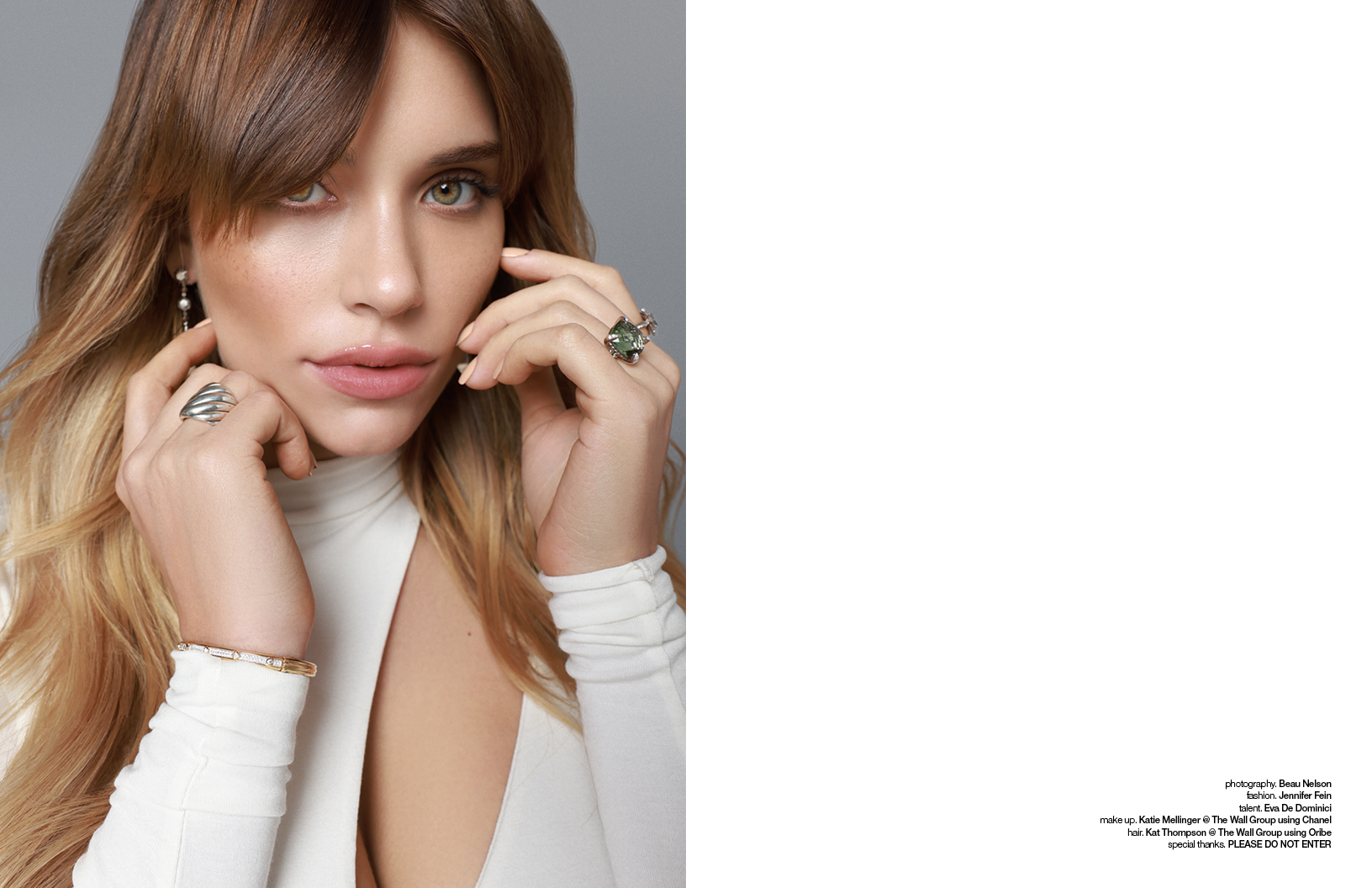 Both Thony and Nadia are strong women and important to Arman — and this undoubtedly brings tension. What was it like filming these intense scenes with your co-stars?

I am very grateful to Adan and Elodie. They are such great scene partners who leave plenty of room for creativity. When it comes to Nadia, she actually likes Thony but she starts seeing her as the obstacle in her path and that complicates her feelings. I try to learn from my scene partners all the time and both Adan and Elodie have so much experience that it’s a blessing for me.

What production has been your favourite so far? Is there a character you’ve played that you’d like to revisit?

The Cleaning Lady is one of my favourites so far because it has been super challenging for me and because it is super special that my first series in America is based upon an Argentinian original series, which is almost impossible. What are the odds, right? But there’s a movie called White Blood (Sangre Blanca) I shoot in the north of Argentina on the border with Bolivia; it is a thriller/drama in which I portray a character in a very extreme situation, and I would love people to see the movie.

What advice would you give to young actresses wanting to break into the industry?

Well, it’s funny, because I feel that I am still that young actress wanting to break into the industry [laughs]. But I would tell those girls: work hard, keep focussed and don’t compare yourself with other actresses, and in case you do, I hope you take those actresses as an inspiration and not to make you feel frustrated. Everyone has a different path and timing, and that is something that when you are a teeneager you might not necesary understand, but it’s just like that. There is no one single story that works exactly the same; respect your own path, give it time and treat yourself with love and patience. Mistakes and failures are here for teaching us — there is always a new opportunity out there waiting for us.

What are you most looking forward to this Summer, and are there future projects you can tell us about?

Oh, I can’t wait for the summer to come; it is definitely my favourite season. I love going to the beach in summertime. I just wanna be reading at the beach looking at the horizon. That is something that makes me so happy. And regarding new projects, I am gonna be part of The Cleaning Lady second season and I couldn’t be more excited about it.

The Cleaning Lady is out now on FOX.