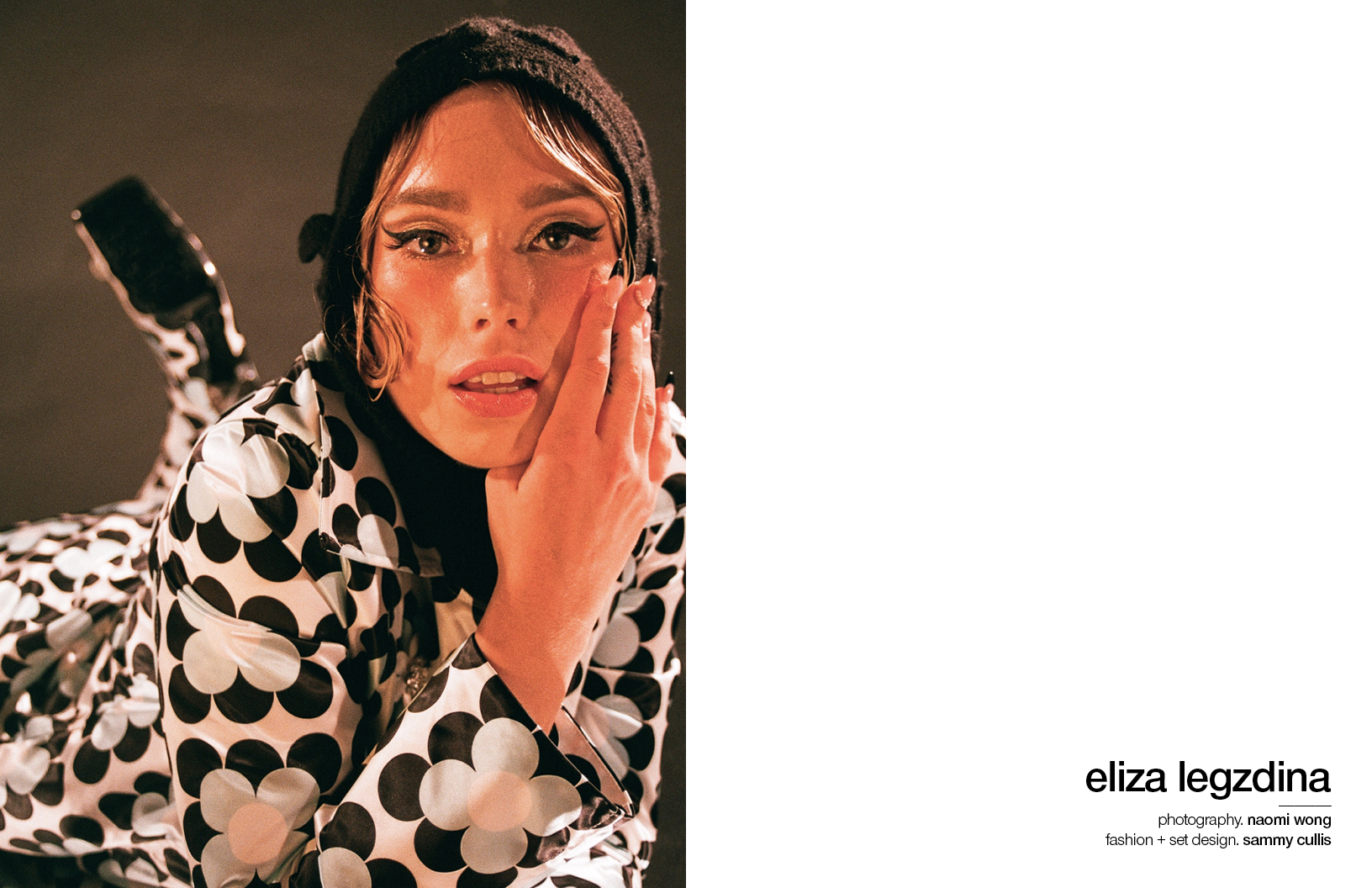 Like the blazing phoenix of femininity rising from the ashes of an old patriarchal world, Eliza Legzdina boldly exploded onto the scene with her debut EP Iron Curtain Golden Pussy. Taking inspiration from an eclectic variety of musical influences, she is undoubtedly a talent to keep on your radar. We spoke to the multi-talented vocalist, poet, and DJ from Latvia about her post-Soviet beginnings, political activism, and creative influences.

The breadth of Eliza’s various cultural influences is bound together by her Latvian roots. She playfully calls herself “a little Latvian pagan princess” as she fondly recalls her musical beginnings in the small city of Ogre. Here, she began performing at age three in the old Soviet culture house where her grandmother would take her for practice every evening. Through sun, rain, and the unforgiving Baltic winters, she was introduced to the world of creative arts, assisted by the loving support of her family who encouraged her to express herself creatively. “I’ve been working on music my entire life,” she says.

Growing up in the aftermath of Soviet occupation, Eliza developed a keen understanding of how oppressive political structures are upheld by the perpetuation of the patriarchal domination of feminised bodies. “The ‘Iron Curtain’ is what they used to call Stalin’s rule of Eastern Europe,” Eliza explains. “Iron Curtain Golden Pussy is about the idea that men love to control precious metals because they are worth so much. It’s the same way that men and the patriarchy try to control womxn. Iron Curtain Golden Pussy is saying that behind the ‘iron curtain’ there are 2.5 womxn for every man. We are powerful, we are life, and we are thriving. We are everything. We are the entire reason that our people have survived the terrible winters and the Russian apocalypse. There is so much power in the pussy if you realise it and no one can take that away from you”.

The songs on the EP gleam with an eclectic fusion of musical influences featuring lyrics that are personal yet relatable, daring and confident but with hints of vulnerability. From playful depictions of the contemporary dating scene to celebrations of womxn and sex-positivity, the EP is rooted in Eliza’s political praxis. She is unapologetic in her sexuality and encourages other womxn and femmes to embrace their own sexuality. “I beg womxn to discuss their desires more,” she tells Schön! “I want womxn to be able to say what they want. Womxn should be able to tell you what they need.”

Eliza reflected on the importance of using her privilege as a white woman to work with Black artists and creatives at every opportunity; she worked with Accra-based artist Bryte on the track “Jelly” and with London based DJ and radio presenter Janelle Wynter on “Tic Toc”. “This world is white supremacist. It is patriarchal. I have to do my part with my privilege to try to change it. I am not perfect as a person; as an activist, I always have to change how I act and what I do and how I use my art.” During her time at an international school in Latvia, she became aware of racial injustice at a young age. She describes witnessing her Black and brown friends being treated differently and the anger she felt as a child. “A lot of people were not used to being around children of different skin colours and I became very defensive of them.” Her experiences growing up shaped her activism today. In light of the murders of George Floyd and Breonna Taylor and the subsequent movement for Black Lives, Eliza has been unapologetic in using her privilege to centre Black womxn in her politics, work, and personal life.

How has the Movement for Black Lives informed the way you work?

Black lives have always and will always matter. Every social movement, every cultural movement has been led by Black womxn. These spaces have been carved out by black womxn, so therefore by working in this industry you must be aware of the issue. This is a non-negotiable movement; no life matters until all black lives matter. The black womxn is to be defended, nurtured, supported. Being an artist manager, representing black womxn and having black business partners has benefitted me in my life, [and] it’s benefitted everyone in this industry. I bloomed because of all the womxn of colour in my life, and I want to make the playing field more equal by making those fat white pigs pay up and give womxn — womxn of colour — Black womxn — the recognition and money that they deserve and yet still are not given. Give the womxn back control of their art and their livelihoods. This issue is inseparable to my journey, our journey in this industry.

You often talk about body positivity and representation. Can you share some of your thoughts on these topics?

I think body positivity is really necessary. A lot of people – men and womxn and non-binary babes – we all live in the confines of what society expects of our bodies — of what we should look like, not what we want to look like. I think that it’s incredibly important to accept that you are beautiful just as you are. There is nobody that can love you enough to fill all the voids of all the trauma you have been through. Especially when it comes to plus-sized, curvy bodies, disabled bodies and non-conforming gender identities, people are the first to shame us, and it is so last century. Some of the most amazingly creative, artistic expression comes from people that are marginalised, and this fear of fat — of cellulite and imperfection — is just the patriarchy’s desire to make all womxn conform, all femmes conform. Conformity is the death of creativity; it is the death of freedom of expression. Conformity is not good for anyone. I think we are moving into an age where people are accepting of themselves and are much more likely to love themselves as they are, and we also have more leaders and icons that tell you that you don’t have to be blonde and skinny to be accepted. But there is still so much work to do — especially in representation. Just because a brand puts a dark-skinned model in its next campaign it does not mean that that the institution of the brand itself is diverse. We need to work harder at not just doing performative allyship and performative body positivity by putting slightly thicker white womxn on the covers of magazines, but we must show diversity of thought and appearance.

How did you get into poetry, and can you tell us about some of your biggest influences?

At school, I was a performance kid — English literature, theatre and music. Poetry to me was a combination of all three. I’ve written poems and spells since I could write. I was heavily influenced by my trilingual roots; speaking three languages I realised there’s power in being able to communicate your feelings to others. It allows them to connect with you. As a little girl in Latvia, I lived in a house that belonged to the best friend of Latvia’s most important significant poet and playwright, Aspazija. I don’t know which part influenced me more, whether it was nursery rhymes, Mx Aspazija, Maya Angelou, or writers like Tori Amos and Anthony Hegarty. Perhaps it was them all. I didn’t get into poetry, poetry came to me.

Tell us about your most important relationships with womxn in your life.

My mum is incredible. She’s so beautiful and strong and kind and hilarious. From her, I have learnt love to love and be loved, and it’s the greatest lesson of all time. We don’t always see eye to eye, but we don’t need to — that was the intention, to become stronger together.

I have a lot of meaningful relationships with womxn. My best friends, including Janelle Wynter (my DJ, my muse, my sis), Aisha Nova (bestie turned creative director), Lauren (my manager at Band of Wolves), Sky Cooper Bar (my guardian angel, mother of Pxssy Palace and a great inspiration to so many) and Affly Johnson, my business partner in poetry and community (Say It Back). I exist because of the relationships we have built with each other. They have saved me from the confines of shame and depression onset by the rules of the patriarchy. I just want to make them proud. My relationships mean more to me than anything money could buy.

What challenges have you faced during lockdown?

At first, slowing down and letting go of my plans was hard. I was mid-tour, stranded in LA when the lockdown started. I had to re-jig my thinking and accept the new normal, all the while not being able to access in the flesh human interactions which for me as an extrovert are so important for both inspiration but also for my mental health.

Now I can see how useful the quarantine was for me. It made me realise that I cannot lose out on what was meant for me. I had the time to clear my mind and let go of things that don’t belong to me — even if I didn’t get to be as productive as I had wanted. I had the privilege of isolating safely with people I love, and I want to use my new-found peace of mind to push my art further.

Give us a fact about yourself that people would be surprised to hear.

Before I worked in music I did two years at an AI company that was building music tech and a music generation system. I was on the operational side of the business, but my colleagues were these brilliant minds. I’m a bit of a nerd at heart! Entrepreneurship is an interest of mine. I’m particularly interested in how easily mobile applications can change our habits. I see myself going back to tech in some way.

What can we expect to see from you in the future?

Incantations for peace and more love amongst people. Dancing in my underwear. Some ridiculous flows, savvy cadences. And a backflip. 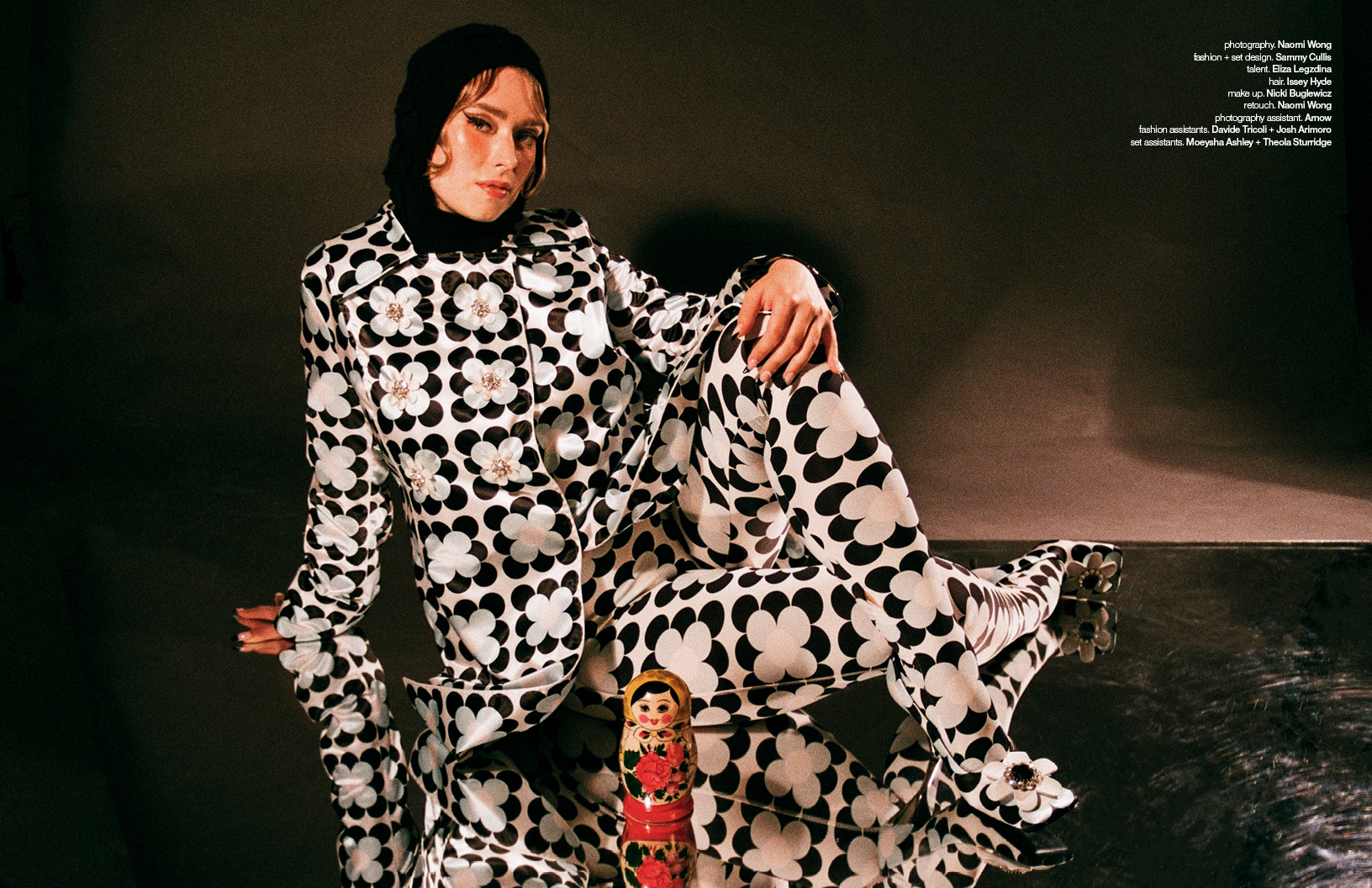