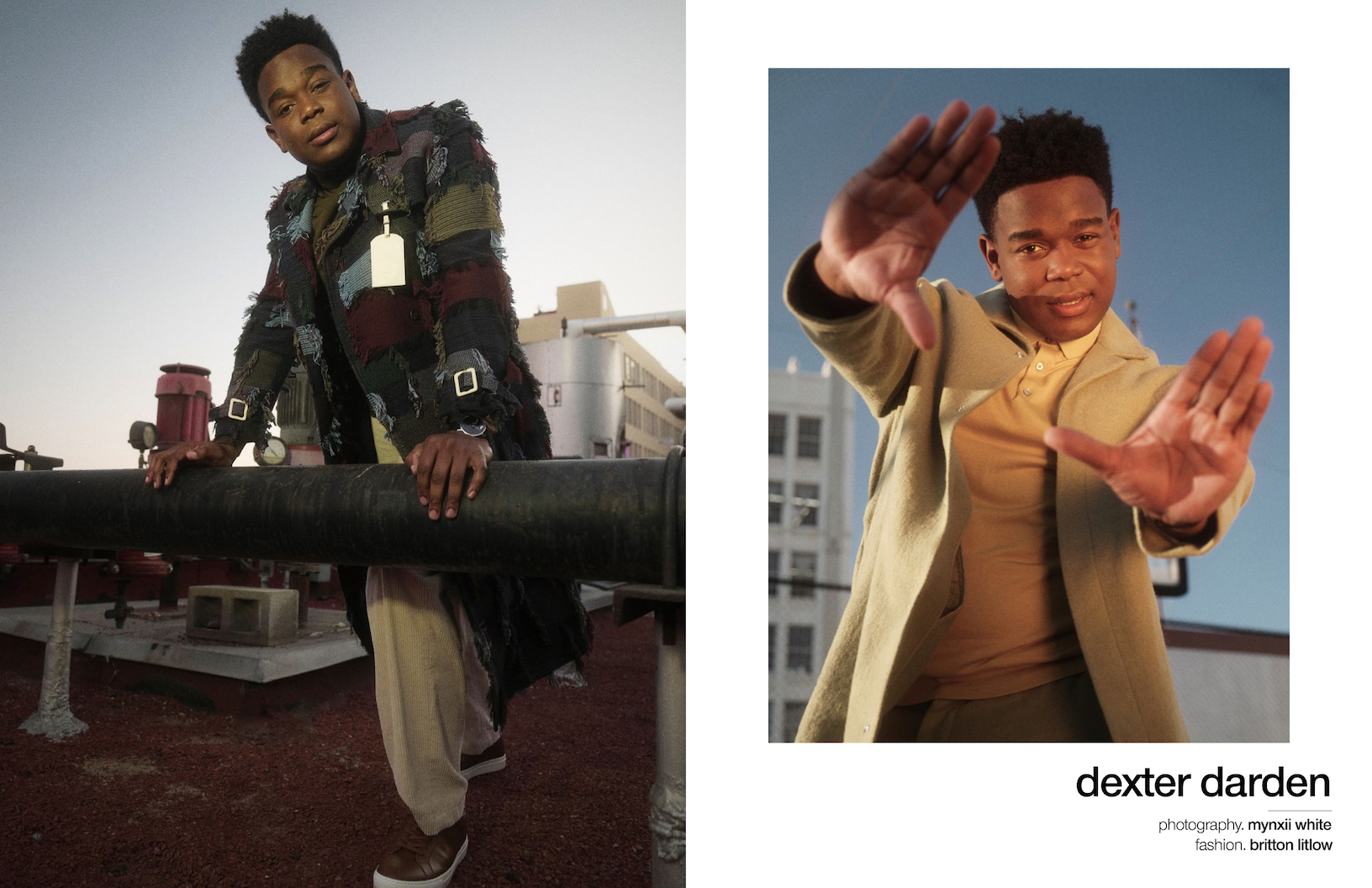 turtleneck. COS
coat + trousers. Victor Li
opposite
all clothing. COS

Back to school looked a bit different all over the world in 2020 due to the COVID-19 pandemic, and Bayside High was no exception. Instead of Zoom classes and socially-distanced learning, however, Bayside is back in session with a merry cast of brand new faces — and a couple of familiar ones, too! Of course, we’re talking about the reboot of beloved ‘90s sitcom, Saved by the Bell.

Much like the real world, the Bayside of today is a very different social and cultural landscape than that of a few decades ago. The original Saved by the Bell was known to tactfully and comedically tackle social issues, and the new iteration has been brought into the modern era to do the same, albeit for the teens of today. Bayside High’s new class gets a reality check when a new group of kids are transferred into its halls after underfunding causes their school to close.

One of those transplants is DeVante, brought to life by Dexter Darden. Not only is he an alum of the popular Maze Runner franchise, but Darden is now officially a member of Bayside High’s Class of 2020. He’s a versatile entertainer with acting, singing and dancing in his arsenal of talents, and he’s also established himself as an activist with the powerful poem he penned and performed in support of Black Lives Matter.

Schön! had the chance to chat with the rising young star about reimagining a beloved series, the role of poetry in his life and what he’s looking forward to in the coming year.

Reboots of popular shows or films often draw a lot of comparisons to the original, even before they’re out. Have you felt any pressure since signing on for this project and, if so, how have you coped with it?

I mean, anytime you step into a reboot of something that was a show or a movie franchise or anything as popular as Saved by the Bell, you always feel a little bit of pressure. You just want to make sure you do the original justice and find a new and creative way to make it as special and as current as possible, and hopefully we did that with Saved… Saved by the Bell from the nineties is not going to work in 2020, so we found a really cool and creative way to add layers and textures to the show — going from making a multicam to single cam just to make it a little bit more real, more in your face and grounded in reality. 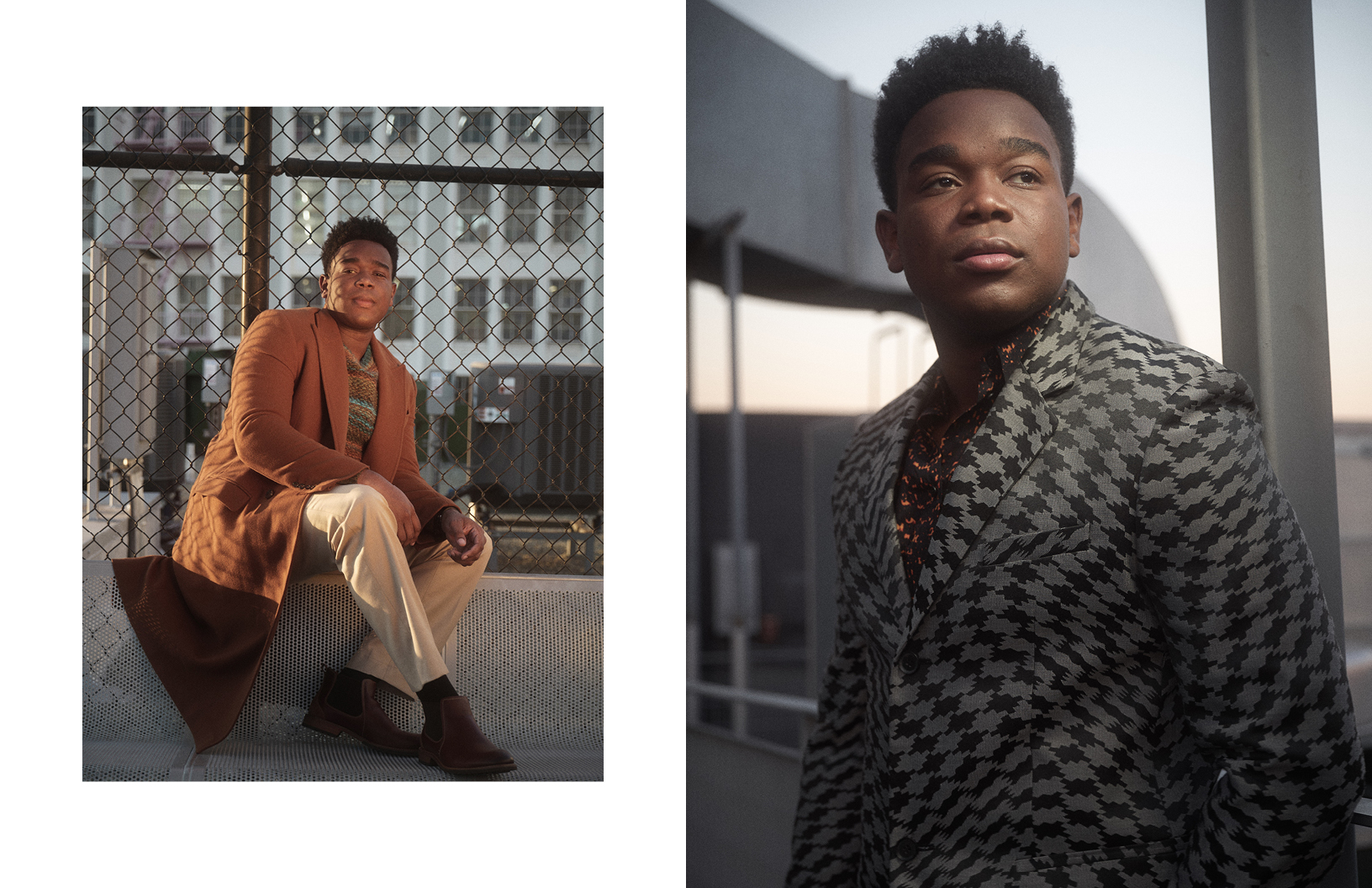 What can you tell us about your character DeVante?

DeVante is the closest character I’ve ever played to myself, I think. He’s a complex, multilayered being who goes to Bayside from Douglas School where he got in a lot of trouble and wasn’t necessarily making the best name for himself, and [he’s] taking this opportunity at Bayside to kind of redefine himself and show people in the world that he’s not exactly what you think he is. There’s much more to him than what the world perceives him as, especially being a 6’1, 6’2 African-American male. He’s finding really nice ways to reinvent himself and continue his legacy as a young black man who just tries to make himself better.

The original Saved by the Bell used comedy to educate and inform on subjects relevant to teens such as drug use, drinking and sex. How has the sequel been updated to be relevant for teens today?

With our show, I think we find a really great way to not only use comedy as a gateway to let kids and people in on serious topics and issues that need to be addressed, but also to use comedy in a comforting way. You know, whenever people are laughing, they feel more open and they feel more welcomed to hear and to listen [to] exactly what we’re trying to articulate. I really think Tracey Wigfield, our showrunner, and Franco Barrio, our co-executive producer who also did the original Saved by the Bell, really found a smart and creative way to use comedy as a gateway to having conversations that people really need to have.

You star alongside some of the original cast members, including Mario Lopez and Elizabeth Berkley. Did they provide some guidance during filming? How so?

Working with Mario and Elizabeth was so special. Having those two, who are literally icons in terms of the show that they did and the legacy that they left behind with the characters being so iconic — it was really, really special having them come onto the show, wanting to be a part of the cast and also wanting to just put their hands on us and guide us and say, ‘listen, we were the original six, we did it our way, but now it’s your turn to do it your way.’ You know? So, having them work with us and having them on set everyday was really, really special. 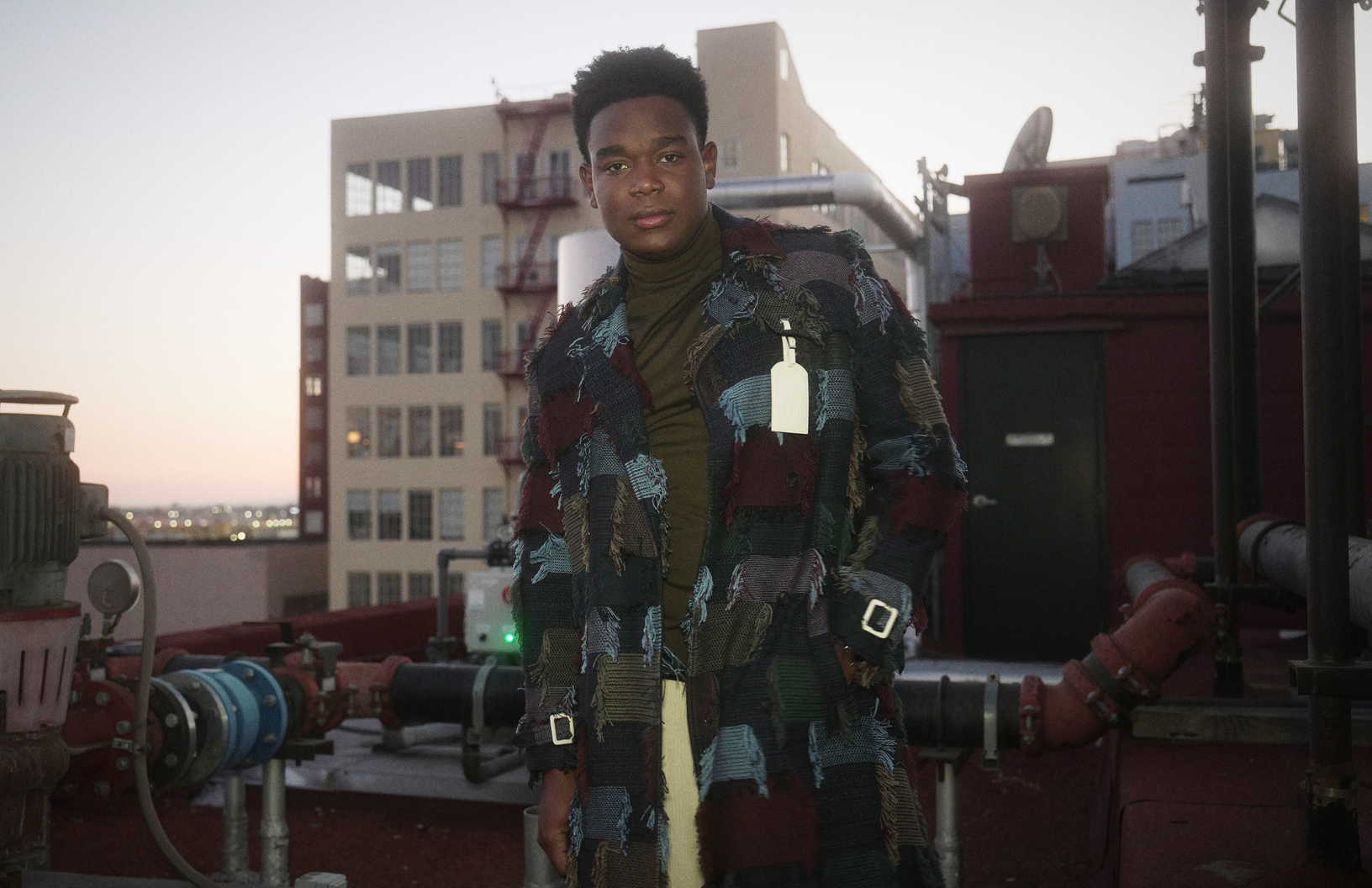 You’re something of a triple threat—you act, sing, and dance. What was your first passion, and what drew you to it?

You also shared some poetry in solidarity with the Black Lives Matter movement and the fight for racial justice and equality. Can you talk us through the emotions you were drawing on when you wrote it?

Wow. I really thank you guys for taking the time to listen to “Silence” and all of my poems from the White Noise series. When I wrote “Silence” I was watching television, and it was right after George Floyd had passed, and I’d already been really, really broken up by Ahmaud Arbery. And, you know, I started seeing friends or acquaintances or people who were just being silent about the issue, not really stepping up into the Black Lives Matter movement or not really stepping up and saying, ‘Hey, what’s going on with this police brutality? This racial injustice isn’t right.’ And so I just wrote a poem to try to articulate to other people who might not necessarily want to listen and hope that they understood. I’m really, really happy with the amount of receptiveness that it got and the amount of people that it affected, because as a young black man in America, it’s really important that [it can help] people see things from my side of view.

What role does writing play in your life? And do you hope to share more poetry or writing in the future?

Writing plays a very pivotal role in my life. I started out by writing music, and I started pretty late. And poetry just kind of came hand-in-hand with it because when you’re writing songs you’re usually trying to rhyme the words in a poetic way. When I just sat down and just started writing them — raw poetry — it became a really, really interesting way to just express myself and see different sides of my artistic abilities, and also tell messages that I thought needed to be articulated. 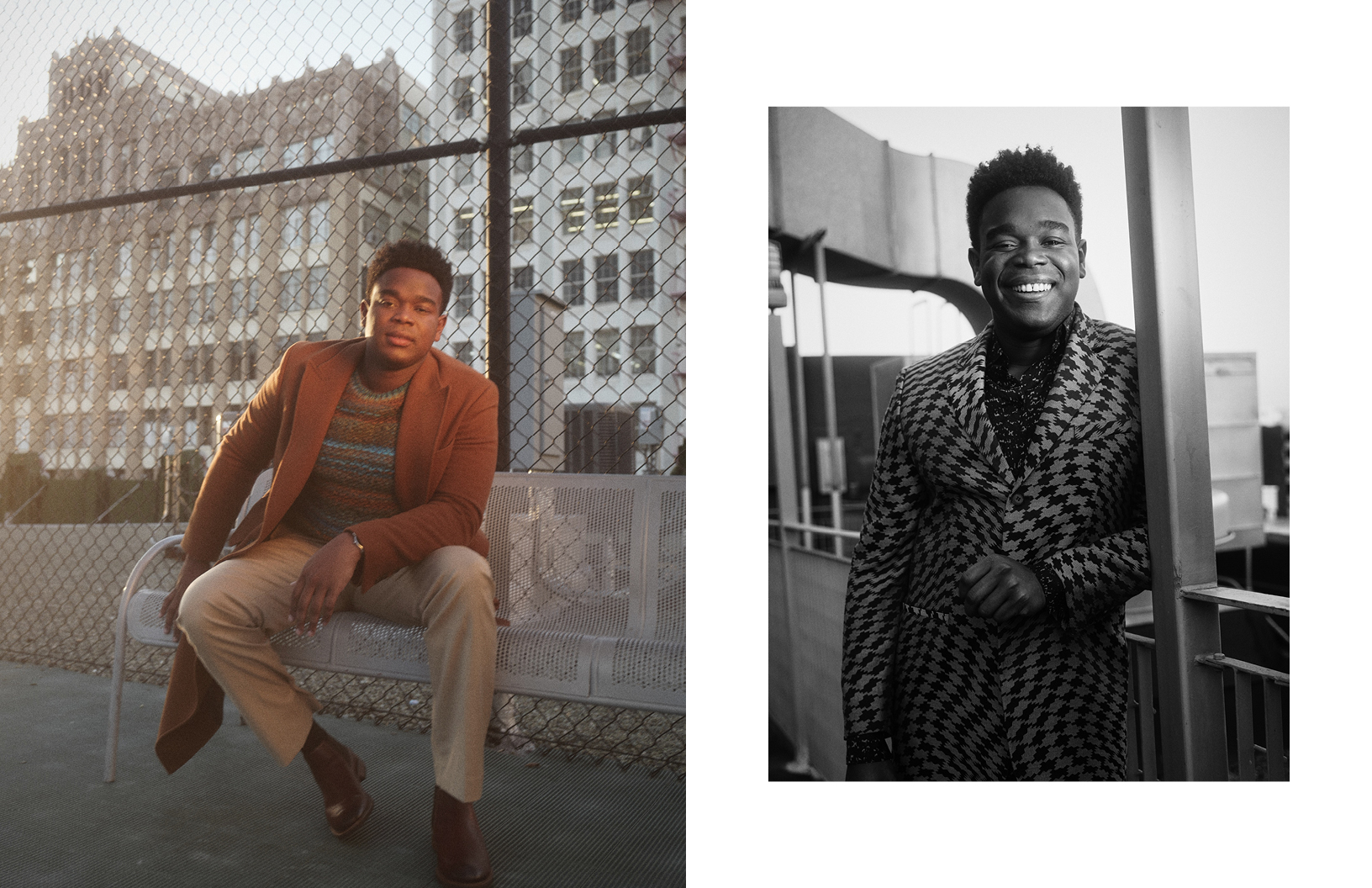 You portray the late, great, civil rights leader John Lewis in upcoming film Sons of the South. What was that experience like?

Man, having the opportunity to play John Lewis is one of those ‘once in a lifetime’ experiences, you know? Not very often do you get the chance to portray somebody who was as politically groundbreaking as him and, you know, really pivotal in the civil rights movement. When I got the opportunity to go and audition and then really show myself and show my portrayal of him as a being and how young he was, but being so impactful, it really, really means a lot to me to have the opportunity to bring him to life on screen and just show people the individuality of who John Lewis is outside of the umbrella of Martin Luther King, Jr.

What were your thoughts going into election week and how are you feeling now?

My thoughts going into election week were not necessarily the best. I lost a lot of faith in our country and in our president within the past four years, and just showing the racial division and how it was being encouraged by the man who we call our president. But now, I just feel a new wave. I feel a new wave of excitement. I believe in democracy again. I believe in the people again. We really, really showed out, and especially in cities where it required a lot of attention and a lot of votes and a lot of passion. So, now moving into 2021 I think we have a new slate, and it’s clean — and, you know, I think it’s not necessarily the most pure, but it’s a better start than where we were before. I think we just have a nice place and a nice, grounding foundation knowing that the people actually stepped up to use their voice, and they want to be heard. 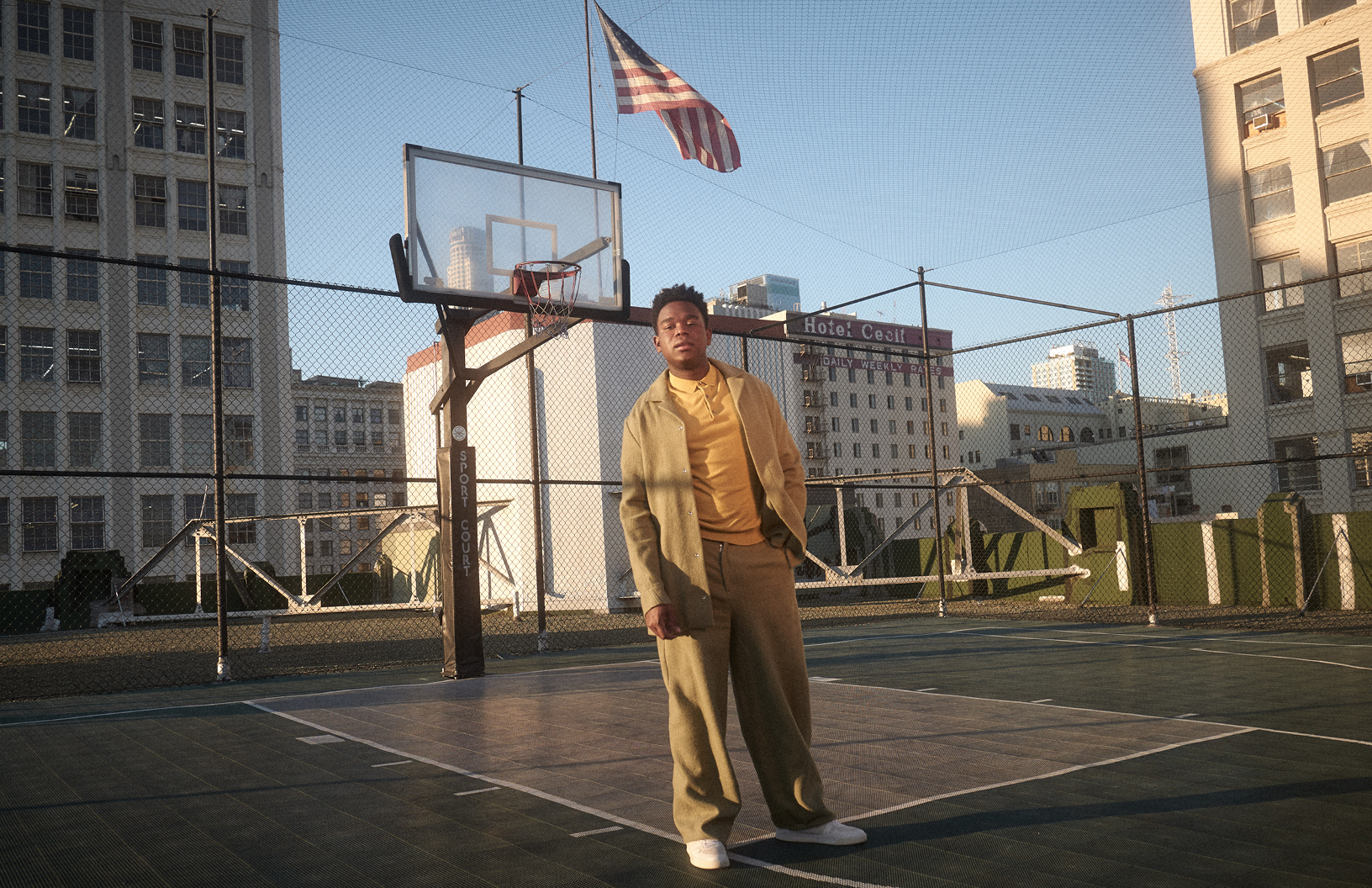 all clothing. COS
shoes. The Greats 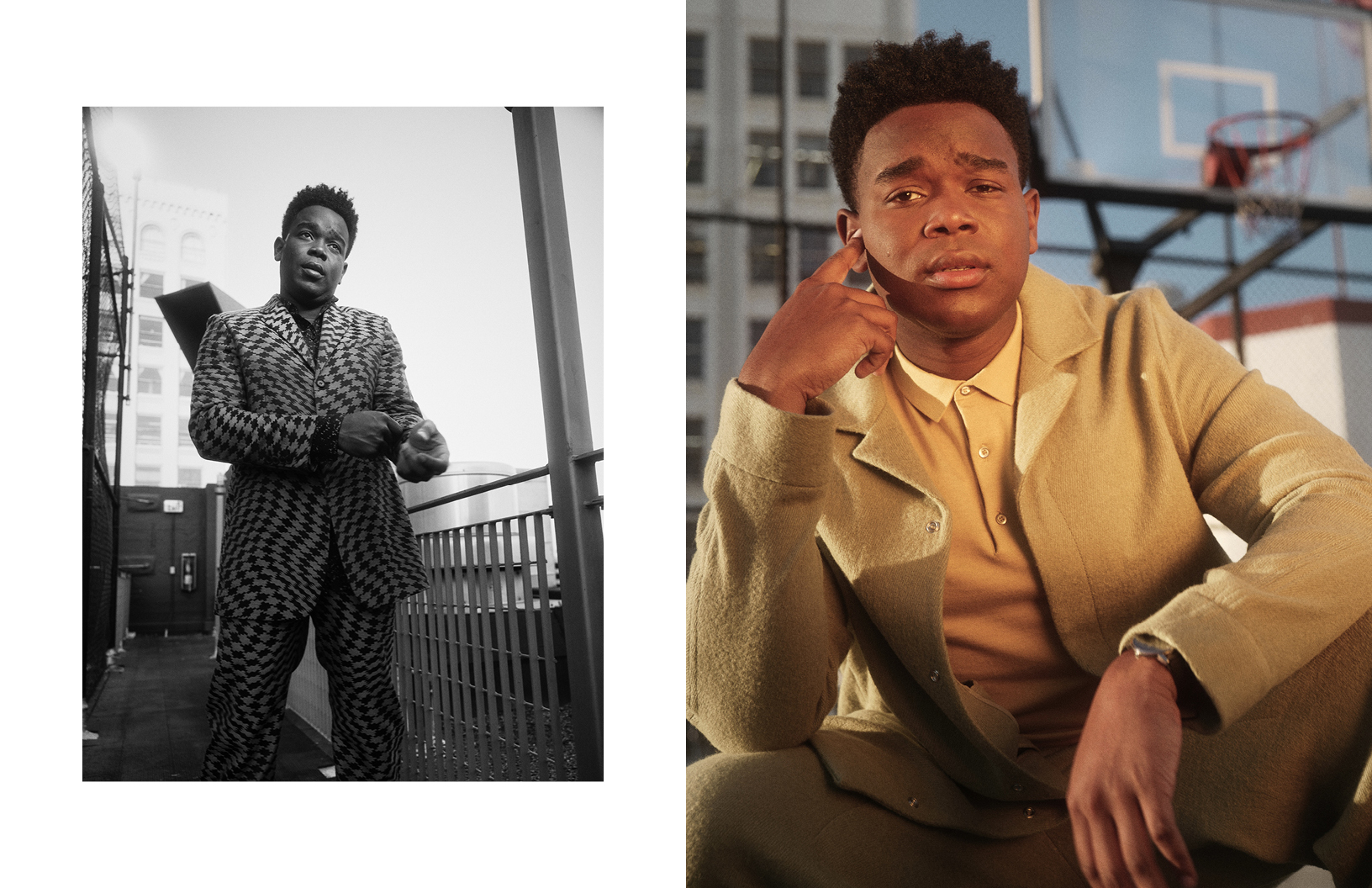 suit. Marcelo Burlon County of Milan
shirt. Christian Wijnants
opposite
all clothing. COS

What has been your greatest motivation this year?

Honestly, my greatest motivation this year has just been getting my mum to L.A. With COVID and with the world shutting down, this is the longest I’ve gone without seeing her and spending time with her. She lives in New Jersey, and I’m out here in California. So now it’s like, ‘you know what? This is a newfound motivation to become more financially secure, to let her have the opportunity to just retire and come out here and be in L.A.’… If the world shuts down again, if a pandemic happens again, we don’t have to be five-hour flight away — more like a 15-minute drive.

And what’s been your greatest frustration?

My greatest frustration has just been seeing how our country handled coronavirus, to be a hundred percent honest. You know, when you look at the world news and you see how countries like Italy and France, and Bulgaria, and China, they just immediately shut it all down and just did what’s best for the people. And then seeing the selfishness of the majority of America and not wanting to shut down or not wanting to wear a mask, it’s really been frustrating because like, there’s a higher purpose, and there’s a reason why we need to function the way that we do. It’s important for us to cooperate with the medical authorities that have been in the position to help navigate us through COVID-19 and do our part to help save lives.

I’m really looking forward to 2021. I think that with the show coming out and having the opportunity to have another film coming out at the top of next year, and you know, just new opportunities, I think the world needed a reset and we got it. And so, hopefully we can find smarter and more creative ways to continue in 2021 with a newer outlook on creativity and being supportive as a community. And also, just being supportive as a nation. Man, I think with the racial divide that was trying to be implemented into our system, I think it’s really nice that we have something else to look forward to. 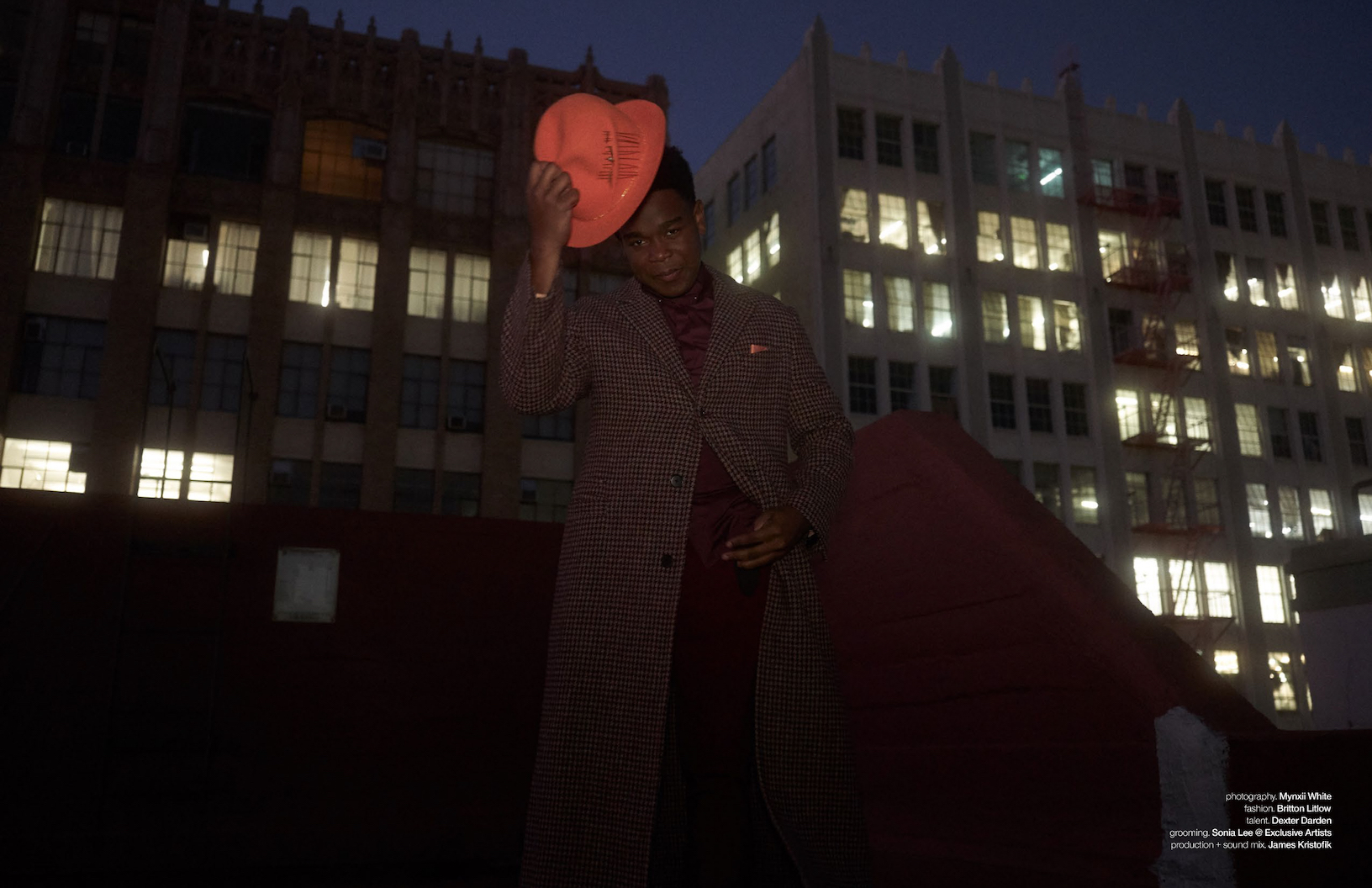 Saved By The Bell is currently streaming on Peacock.