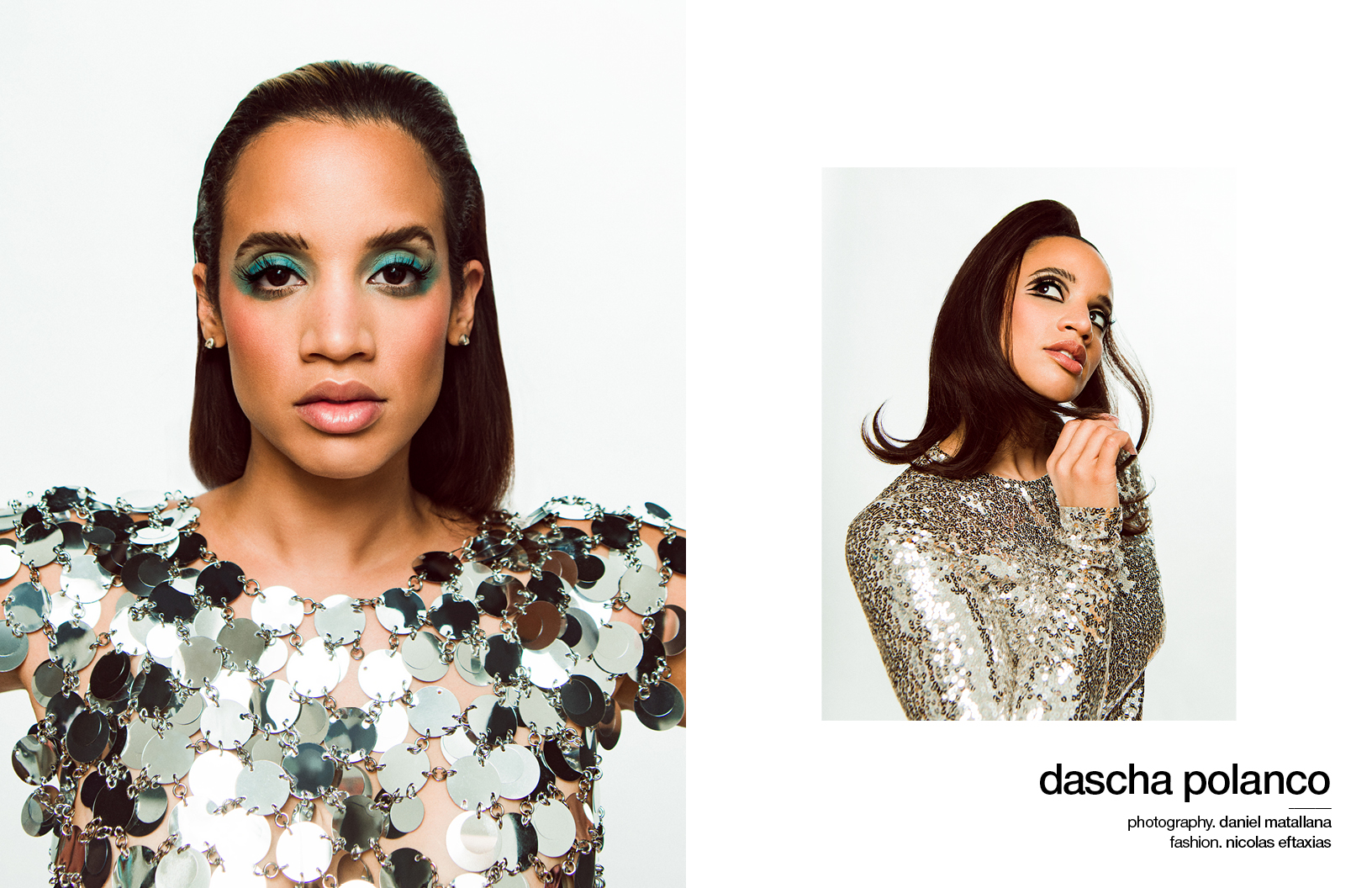 After portraying such prominent roles like Daya in Orange Is the New Black and Beatrice in Russian Doll, it’s strange to think that just over a decade ago Dascha Polanco was managing a hospital operating room and training to be a nurse. It wasn’t exactly the career she had in mind, but years of self-doubt, confidence issues and impostor syndrome kept her dreams of being an actor out of reach. “It’s like being that inane young teen who knows what they want to do, but their surroundings and people around them don’t really believe in it, so why should you?” This perseverance and her intrinsic need to push herself is what sets Polanco apart as an actress: someone who is so passionate about her craft and authentic storytelling that speaking with her is equal parts inspirational and admirable.

As soon as she had her revelation, she left her job and threw herself into acting classes, itching to sink her teeth into any role different from the last. “For a long time, especially coming into acting very raw and inexperienced, I didn’t realise this could even be my livelihood. What I’ve realised is that when you take projects that highlight different perspectives, it helps move everything else forward.”

Throughout her career, Dascha has gravitated towards projects that never shy away from telling the truth. “Sometimes, we’re so focused on what’s next we don’t realise how far we’ve come, and I’m definitely in that category,” she says. “I’m honoured to be part of huge projects that reflect diversity and authentic stories about women. Using Orange Is the New Black as an example — those stories and those characters are things you don’t normally see on-screen.”

When she discusses her latest project — the screen adaptation of In The Heights directed by Jon M. Chu — she sounds as passionate as she did when she first received the news that she got the role. “With some things, it can feel like they are checking boxes and filling a census, but with In The Heights, I believe everyone will be able to see the neighbourhood, the salon owner, the guy passing you by, and be able to say they have someone like them in their neighbourhood.” Authenticity is at the heart of In The Heights, a musical production created by Lin Manuel Miranda that has been lauded for its accurate glimpse into the lives of those who live in Washington Heights, New York. 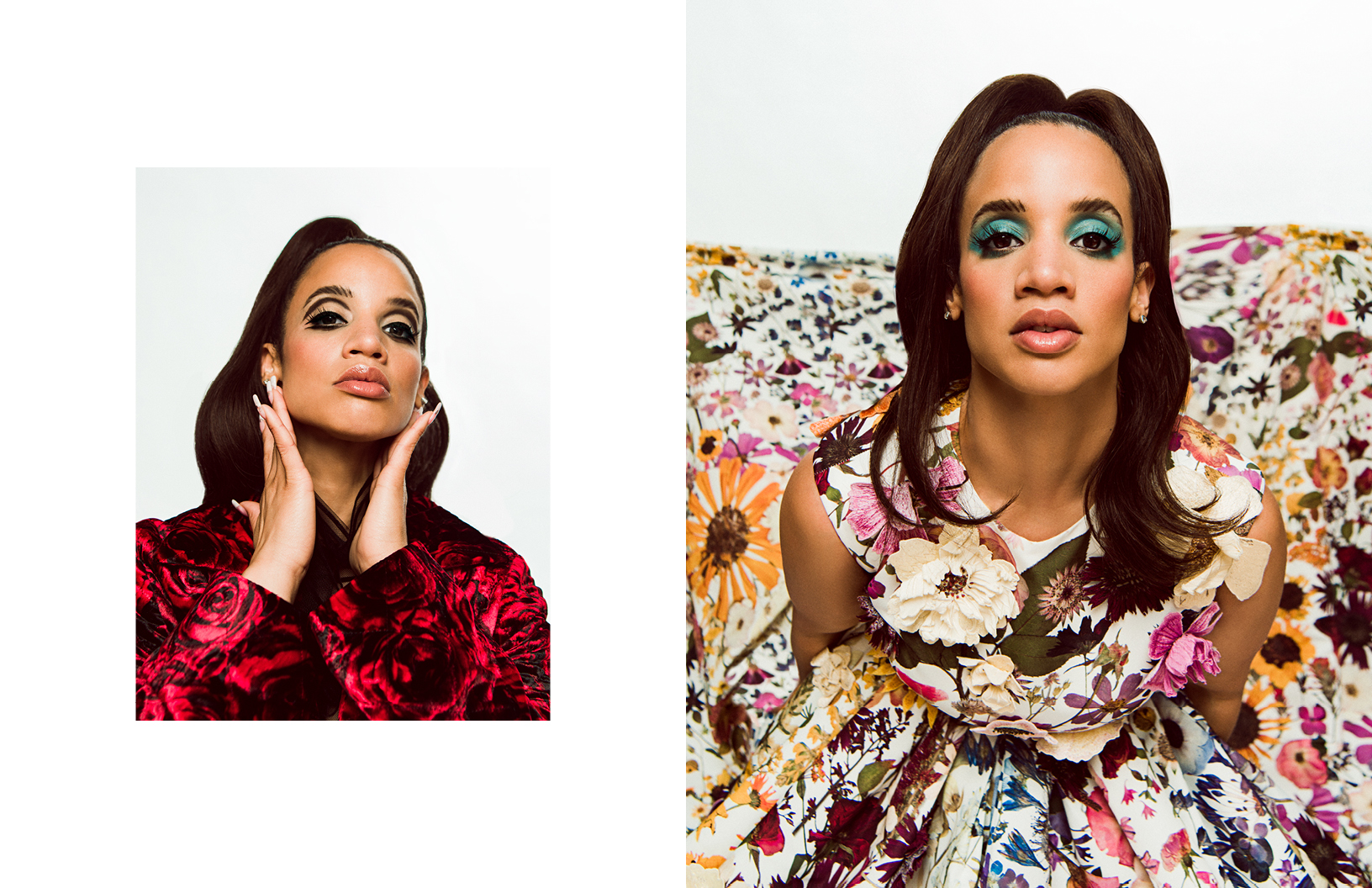 Although many of her castmates had existing character material to work with in the Jon M. Chu-directed screen adaptation, Polanco didn’t. Instead, in what seems to be a theme throughout her life, the universe gave Dascha the role of Cuca, a new character created for the film. “I actually originally auditioned for Daniella,” Polanco states. “The musical is still pretty relevant, but Jon wanted to make some minor adjustments, and thus Cuca was born! She’s the life of the party, the one person you know in your community that knows everyone, and is someone that will help you if you need help.”

Whilst those qualities are something she can pinpoint within herself, portraying Cuca became even more of a personal experience than she originally realised. “Cuca dreams big, and she’s empowered by her job as a hair stylist and loves being part of a big family, and I was able to draw inspiration from my own family and my aunts who still have a salon to this day,” Dascha explains. “Culturally, doing our hair is something that every little girl grows up with — you go to the salon, get your wash and set, get your rollers. It’s an intimate experience and not just anyone gets to be a part of that… It’s so ritualistic, and I wanted to make sure those feelings of intimacy within this community through those spaces, like hair salons, and their matriarchs, were portrayed properly.”

Even if In The Heights is guaranteed to grow Polanco’s career even further, she’s reticent to make it sound like it was an easy path to get here. “The story is about having a dream, and that’s something I really related to,” she expresses. “I didn’t know anyone in the industry or had someone pushing me. I had to figure it out for myself, like a lot of other women of colour.” In an interesting twist of fate, the project was something that forced her to push herself out of the same comfort zone she was in as she tried to feel settled in pursuing a career as a nurse. “When I told my manager I was ready to audition, I was so nervous. I hadn’t sung since I was a kid in church. It was a moment to overcome fear and overcome something I was careful about. I believed that even if I didn’t get the role, having the opportunity to be in front of them and celebrate that we are having these auditions and that the project is finally coming to life would be enough for me.” 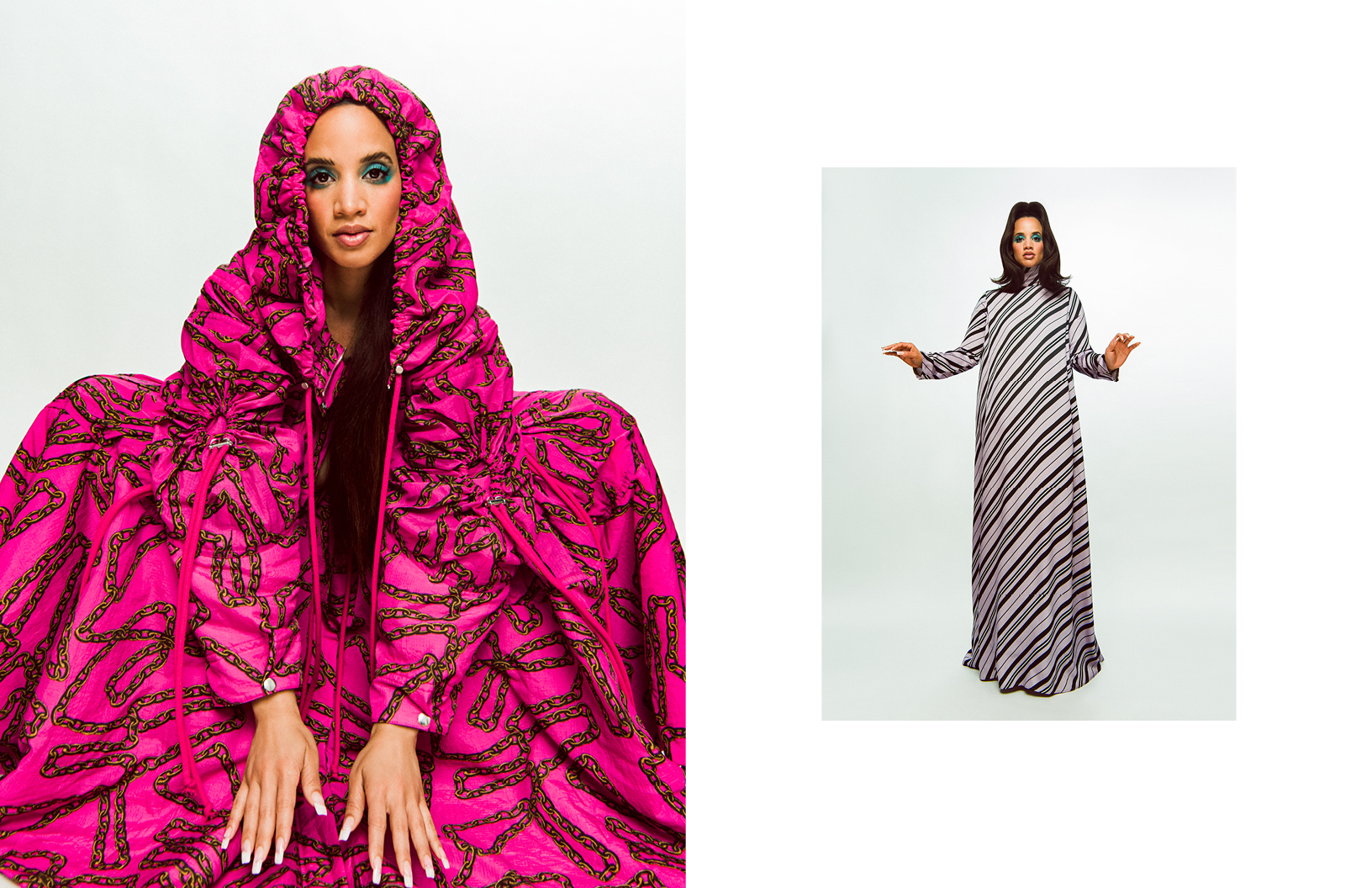 Leaning into fear instead of running away from it ended up working in Polanco’s favour. “I left it in the hands of God, and when I got the callback, I couldn’t believe I booked it. After years of figuring everything out, moments like those — and like being in the middle of Times Square right now — are reassuring and validating that I’m doing the right thing.”

Carrying the theme of community building into her day-to-day life, Dascha aims to use her platform to enact change and encourage productive conversations about pertinent social issues. “I’m vocal about what I believe in, and whatever I don’t know, I want to learn about,” she passionately declares. “It is important for me to not speak about things that are not necessarily my expertise, but inquire and educate myself on those things. I want to hear people out, learn about what they believe in and learn about their experience and try to better understand them rather than criticising them or telling them how they should live their life.” In a world where everything seems incredibly black-and-white, Dascha wants to dance in the grey space and bridge the two together. “I don’t expect anyone to follow what I say or what I’m saying as advice; all I can say is this is my experience, this is what I support, and continue to learn every day and educate myself. I can have a conversation with somebody who I don’t agree with and that’s okay. That’s what my platform is and how I try to live my life — I accept you for who you are, and we’re learning from each other.”

Despite the pandemic forcing In The Heights to be delayed for a year and spending months inside, it’s poetic that the film’s release marks a decade since Polanco’s first credited role. When asked how she thinks she’s grown in the last ten years, she laughs. “I feel like I’m still growing, but in the last ten years I have realised something,” she pauses. “For so long, I didn’t realise that this could be my career. What I’ve learned is that everyone serves a purpose, and this is mine.” 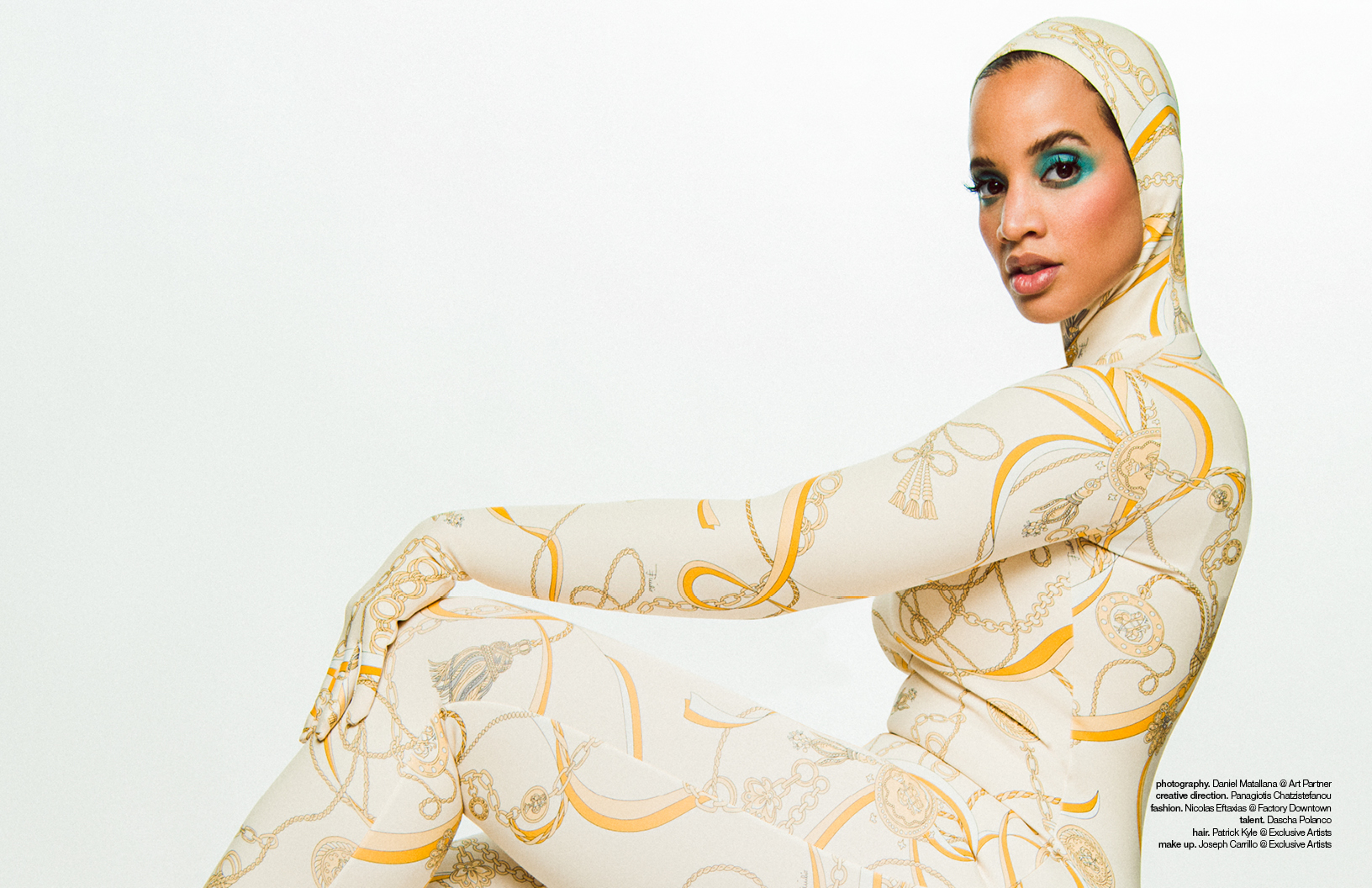 In The Heights is currently in cinemas and streaming on HBO Max.