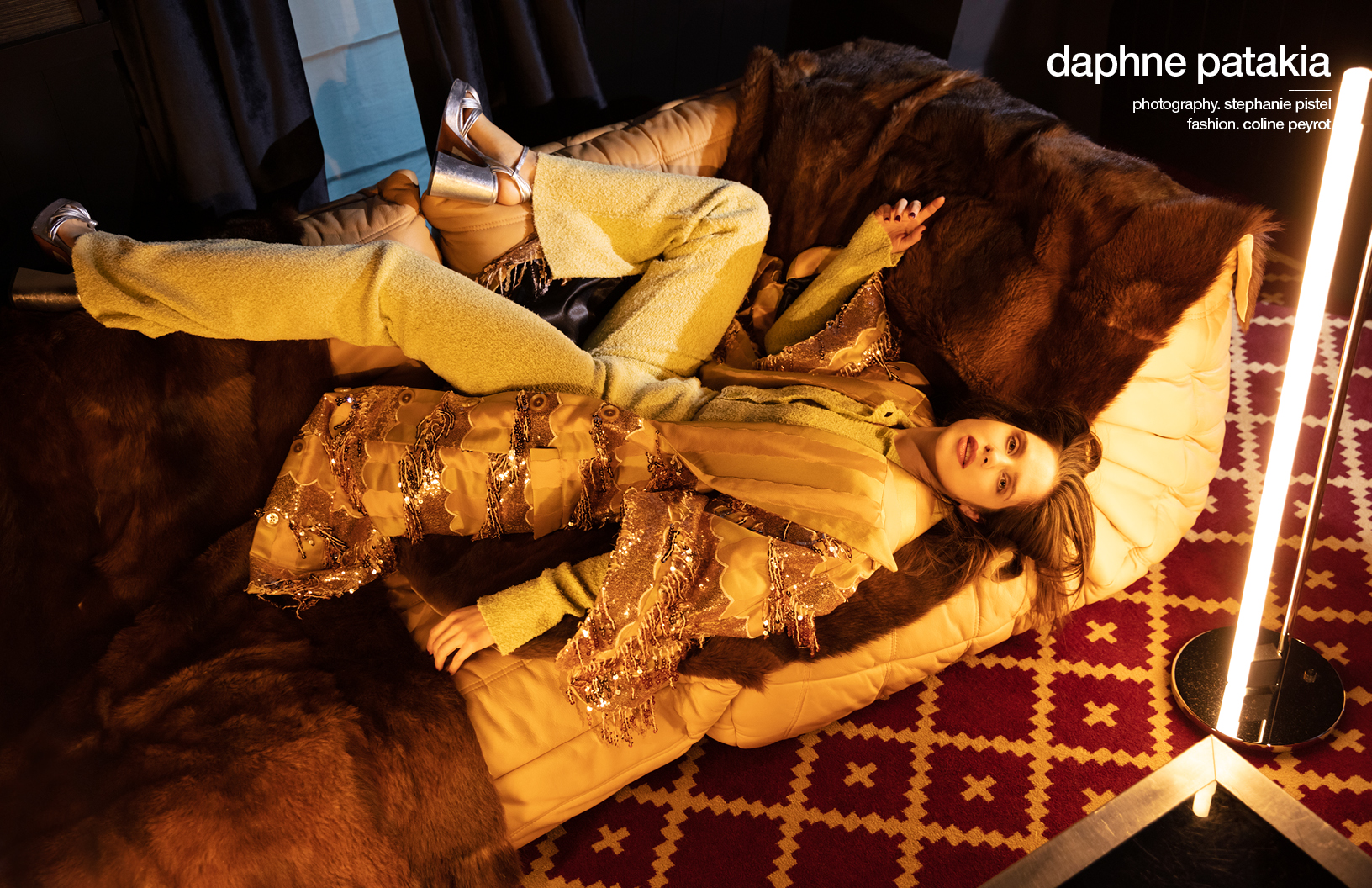 By playing with taboos and audience expectations, cult film director Paul Verhoeven’s Benedetta has become one of the most lusted after and talked about films of the year — an elusive film comprised of hallucinations of Jesus, Virgin Mary statues turned sex toys and torture. Starring across from Virginie Efira, Daphne Patakia portrays Benedetta’s love interest, the naive and compulsive lesbian nun Bartolomea. The Greek actress speaks to Schön! about on set dynamics, the importance of complex female characters and the new year.

Hello Daphne! How was your year?

Great, because we shot Benedetta three years ago and finally 2021 was the year it came out. It was supposed to screen at Cannes in 2019, but Paul Verhoeven had some health issues, so it was postponed. The producer said we’re going to wait for 2020, then they called me to say the film has been taken by Cannes and we were all celebrating, then COVID happened. Then they decided to wait for the next year.

I’ve been before, but this was the first time I was in competition. It was great. I remember the red carpet, everybody was shouting, and I was terrified. I looked at Paul Verhoeven, and he told me that when he was there for Basic Instinct — everybody was shouting so much for Sharon Stone that it scared him. For Virginie, it was really crazy because she’s very famous in France. People were going nuts.

Were you a fan of Paul Verhoeven before Benedetta?

I wasn’t very familiar with his work, but I had seen Basic Instinct. When I knew that I was going to do a casting for him I saw almost all his movies. My favourite one is Flesh and Blood. His first English speaking film with Jennifer Jason Leigh, she was 22 years old at the time, she’s amazing. The film is not his most famous or loved one, but I like it because I think it has many similarities with our film. It’s set in the Middle Ages, there’s a plague, and even some of the shots, they’re identical – the link to our film is maybe the reason I love it so much. I also found it very, very fun.

Are you now a Verhoeven fan?

I’m a huge Verhoeven fan. For real, I’m a huge Verhoeven fan because I love the way he treats women. I love the female characters in his films. They’re always very complicated and they’re never victims. They always start in a place where you would think that they’re victims, but they always return to the situation, and they’re never victimized themselves. They always do what they want. In his movies there’s sex and violence, but it’s always treated in a very interesting way. Sex is not there just for the sake of sensuality; it always tells something more. For example, in Basic Instinct the sex scene is not really a sensual one. I was anxious watching. You’re not checking out how they’re making love — you are just so scared. When is she going to take the ice breaker and kill him? It’s a thriller scene. Or in Showgirls, the sex scene is so over the top, it’s funny, it’s actually really funny. I feel that in our film, there’s a comedic aspect in the sex scenes at some points, they serve the story somehow, and they’re never just there for sensuality. 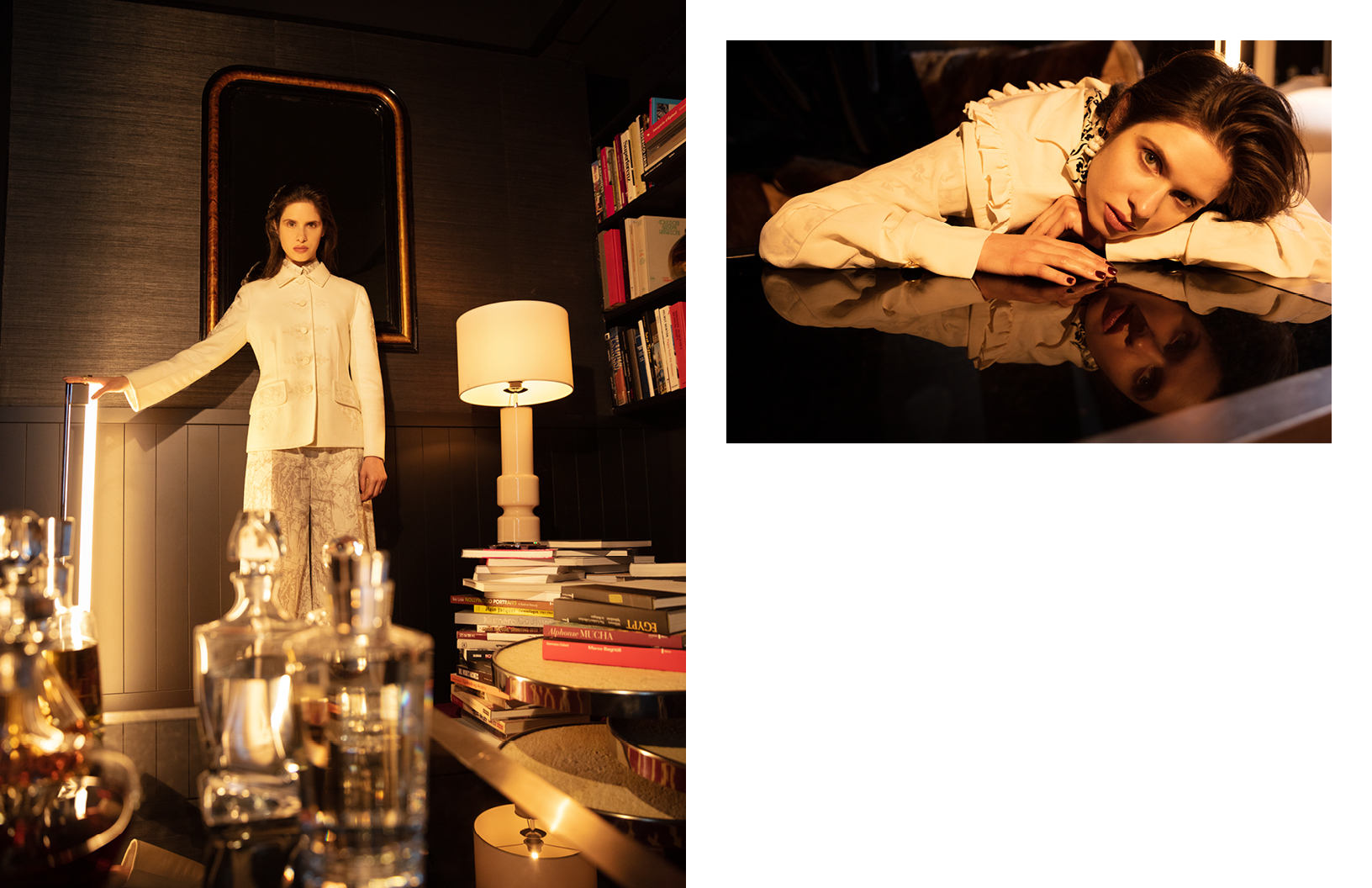 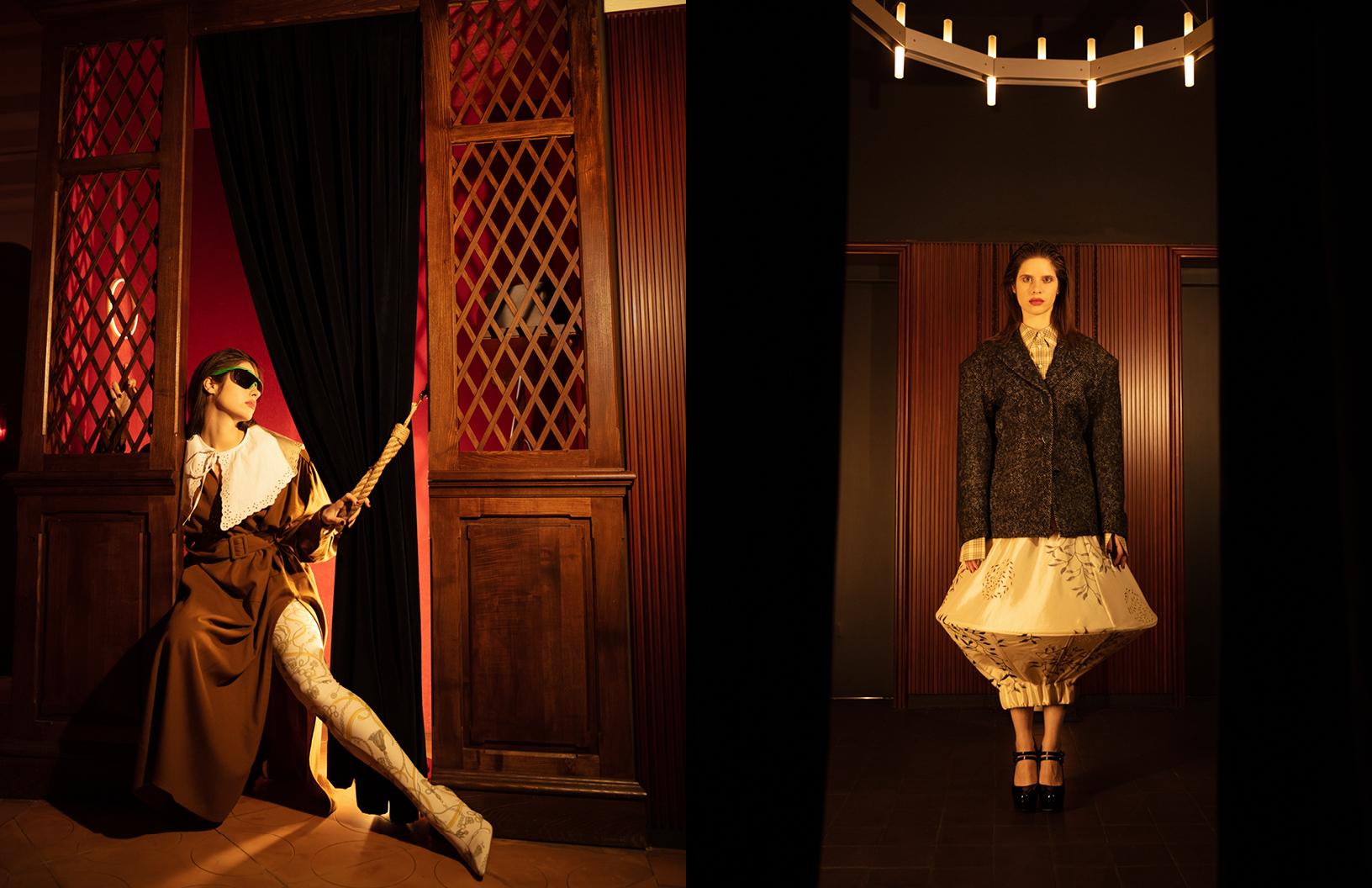 Bartolomea isn’t only complex — she’s also super ambiguous. How did you tackle this?

That’s something that’s very present in Paul Verhoeven movies, ambiguity. When I read the script, I remember turning the pages and thinking not one scene is normal or expendable. Every time you think you know what’s happening, you don’t. Even with this film what’s very interesting is that you never really get what sort of film it is. At some point, you might think that it’s a drama, and then you say, ‘oh, no, it’s maybe a comedy’. Same with the characters, you never understand what their motives are. So of course, it’s something very hard to portray. Ambiguity is something that we felt, not something that we acted on. We decide on some motivations, or not. Verhoeven wants to feel the ambiguity. For example, he never talks about the psychology of the character. He doesn’t like that. When we did the casting, he said to me, ‘see you on set.’ And I asked him, ‘are we going to do any rehearsals?’ And he said, ‘you know what to do.’ On set, it was up to us; he really allowed us the freedom to propose whatever we wanted. Then of course, he would come and direct us, but the first instinct was our instinct for the character. That’s what he wanted. He was the one feeling the ambiguity. Even when he had something very precise to give as a direction, he would turn it over. He would say to me, ‘you do this because you’re in love with her,’ turn around to leave, then he would come back and say, ‘or maybe not.’ Even his directions were ambiguous. Even we didn’t really know — sometimes in life you don’t know. For Bartolomea, I thought that it was perfect to have a more instinctive approach to the character, she’s also a girl that was very instinctive, very connected to Earth, and wild. I don’t always work like that but for this movie, and this character, I felt that that’s what he wanted.

And obviously, the ambiguity makes it so much more interesting to watch because you’re free to interpret yourself. What have you thought of the reactions to the movie?

That’s what was interesting because there are so many ways of analysing the movie. I think that each time you can see it with a different viewpoint. For some people, it was really a satire, for other people a love story and for other people political. Some others thought it was very, very funny. For me, what is great about the movie is that it’s all these things, and the movie makes fun of itself constantly. When you think it’s really serious, no, it’s not. At the same time, it talks about some serious subjects. And of course, it’s about love. It’s a historical movie and it’s based on a true story. If you read the book, you will be amazed about how everything you see in the movie really happens. When I read the script, I thought ‘wow, Verhoeven has a huge imagination’, but everything is in the book! All the details, even the sex details that might sound over the top are real.

Obviously, Bartolomea doesn’t believe Benedetta’s visions, but when you watched the film what did you think? 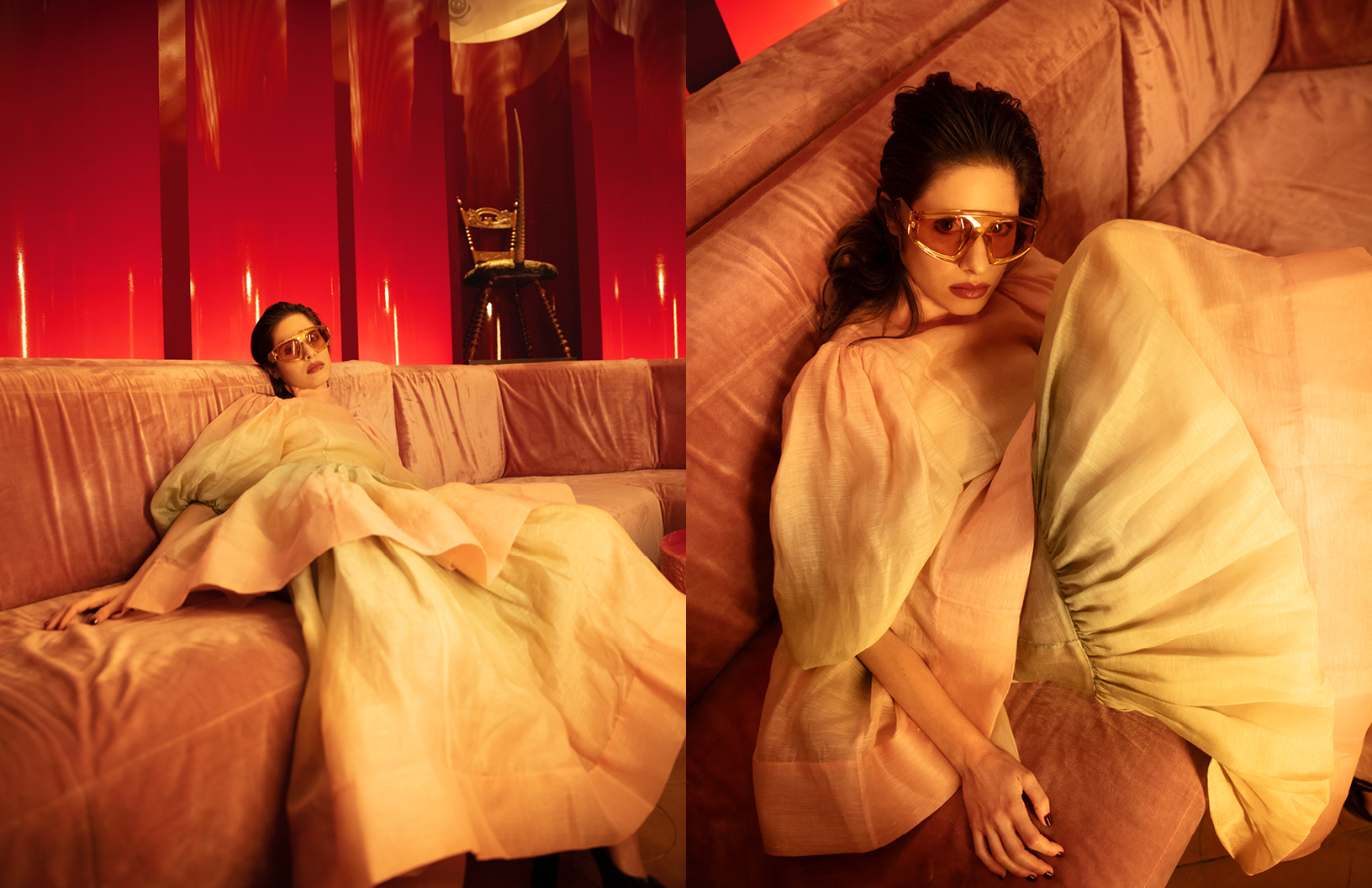 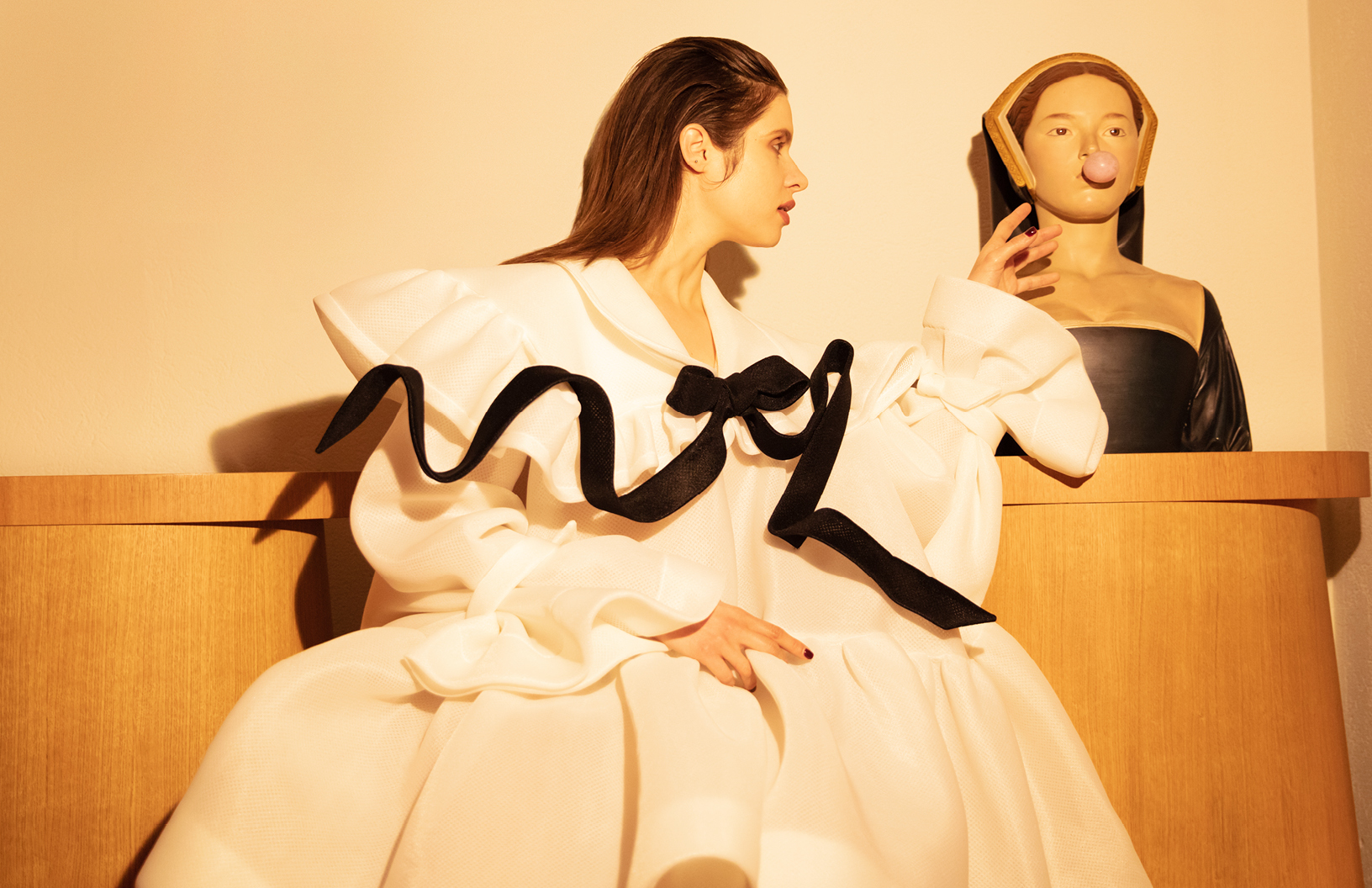 There are parts that are quite hard to watch because of the violence. As an actress, do you find it easy to switch off after a very graphic or emotionally heavy scene?

Yes, I mean, it’s funny because the scenes that are most difficult to watch, like the torture scene, were the ones that were more — not fun, not pleasant, but interesting to do, like a cathartic experience. Torture is everybody’s worst nightmare, so to do it is a cathartic experience somehow, because you somehow exorcise it and get it out of you. You can almost go deep in the emotions because you know it’s fake. It washes you. It’s almost like therapy, somehow.

Who were the characters you looked up to, that you felt represented you?

For me, Gena Rowlands in Cassavetes’ films is a very pleasant exception. I’m not saying that all women in all films in history are objectified, but it’s really the majority. I think it’s not an exaggeration to say that. For sure, Gena Rowlands and how Cassavetes films her. It’s something else, something very different. She’s so free with her interpretations. When I saw A Woman Under the Influence it was a shock what this woman could do. She was free with her performance and not scared to dive very, very deep.

When you aren’t on set, how do you spend your time?

At the moment, I’m doing lots of castings, so I prepare for those. But other than that, like everyone, I have started cooking. I developed a passion for cooking and listening to podcasts. I go to the movies a lot. I saw Chungking Express by Wong Kar-Wai. I really loved it.

What are you working on at the moment? Are you doing any projects or anything coming up?

Yeah, I finished a film with Adele Exarchopoulos. She’s the star of Blue is the Warmest Colour, that’s going to be out next year. And I have some other projects, but I don’t think I can talk about them.

And my last question, what are you looking forward to in the New Year?

Generally, what gives me hope is what we discussed before, that there are some changes in how women are represented. I hope that in 2022, we are going to see more interesting films in this aspect: in representation generally, not only females but also how  men are also represented. Personally, well, I hope I’ll work in films that I like and that inspire me. 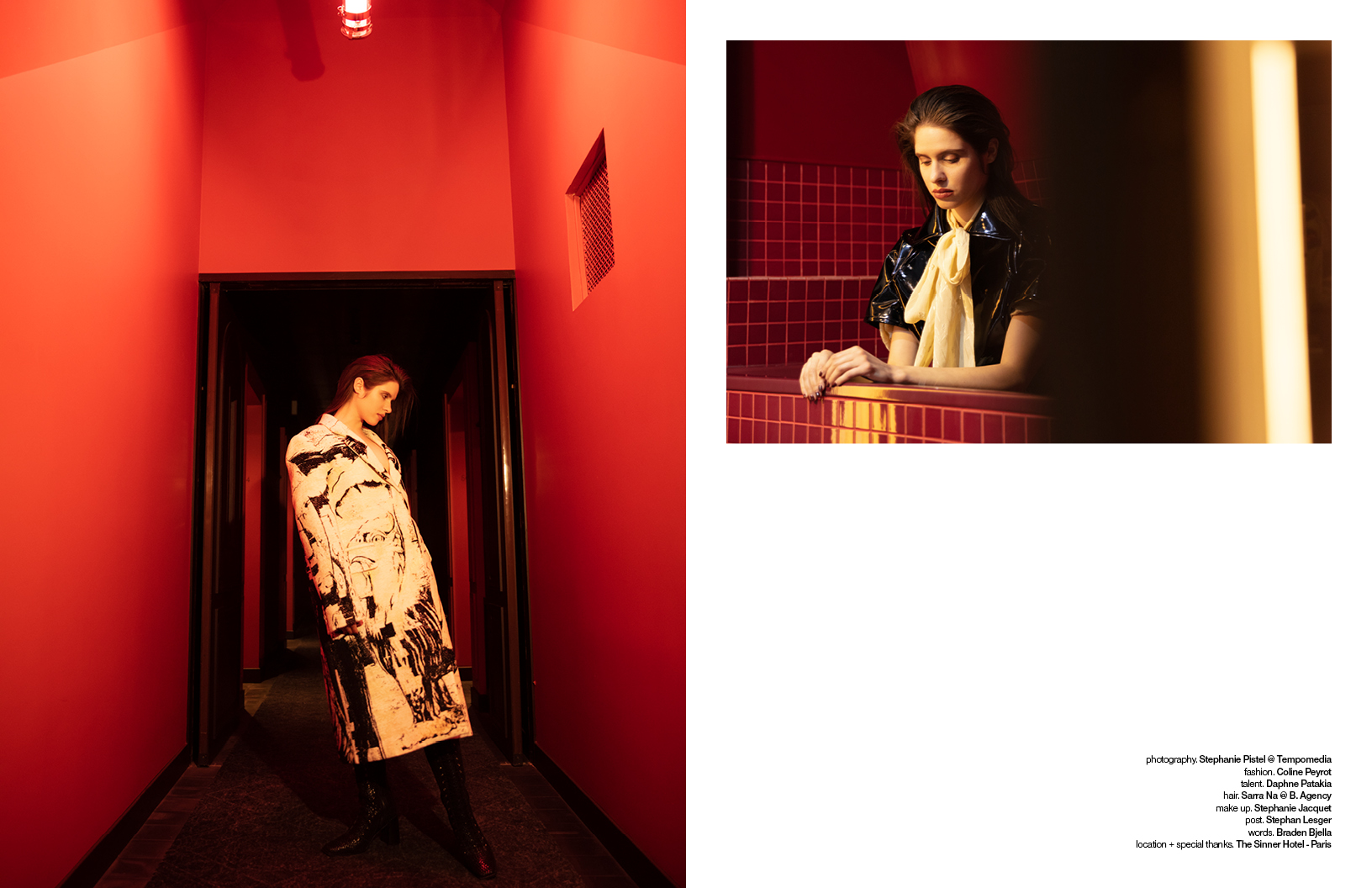 Benedetta is currently in cinemas.