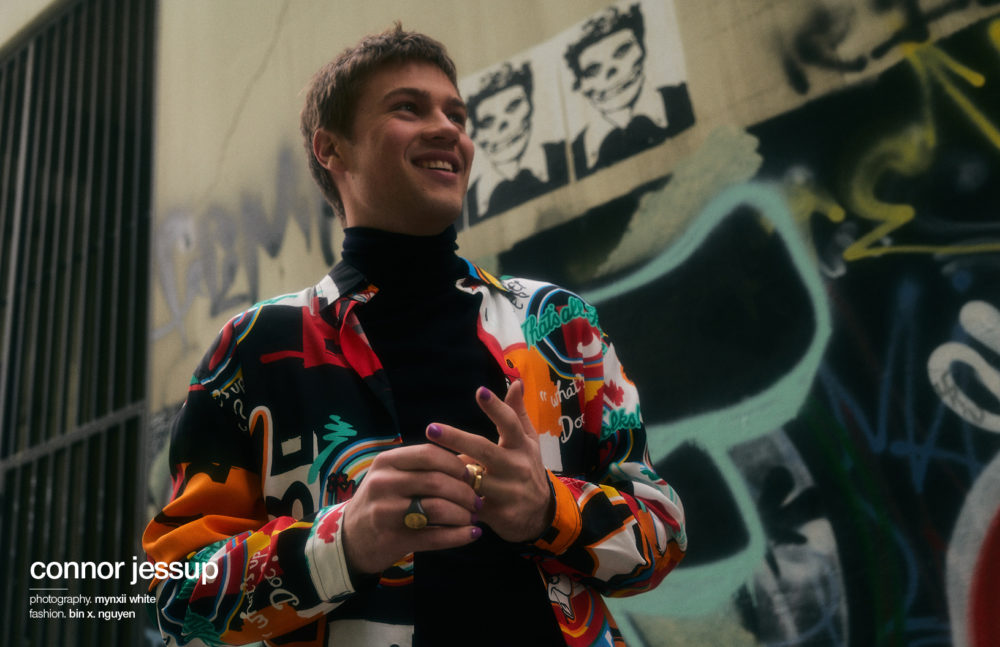 You wouldn’t know it from his calm demeanour but actor, director, writer, nail polish extraordinaire, and all-around talent Connor Jessup just can’t sit still. At only 25 years old, Jessup has already led a career well beyond his years. He’s starred in the Steven Spielberg-produced Falling Skies, landed roles in two series of American Crime and even managed to have a full-length feature of his own released with the support of The Criterion Collection — a documentary about Thai filmmaker Apichatpong Weerasethakul. His latest project, the Netflix-produced supernatural drama Locke & Key, is another entrant on this impressive CV. Now that the show is streaming around the world, Schön! spoke to the actor about its release, Japanese movies and what he has coming next. Watch our exclusive video with the star and make sure to read our interview below.

Before diving into your work, we wanted to ask a personal question first. You came out last year in an Instagram post and became Instagram official with your boyfriend Miles Heizer earlier this month. What’s been the strangest part about having your personal life suddenly be the interest of so many people, like us?

Just the fact of it. I’m a mostly boring person. If people could peek in on my daily routine they would run away yawning.

Fair enough! Now that Locke & Key is out, how has it been watching audiences around the world react to the show? Any standout moments or reactions?

It’s always weird when something becomes public, especially with streaming. It’s so immediate and global. You’re trying to judge reaction entirely from within cyberspace. It’s exciting that people seem to be enjoying it, but it all feels somehow unreal. The reactions that have been the most tangible are from my friends and family. I have been part of some truly hilarious group chats. Apparently people have very passionate feelings on Scot vs. Gabe. My brother told me he didn’t buy me as a hockey player! A friend offered to teach me how to properly smoke a joint… Everyone loves Rufus… 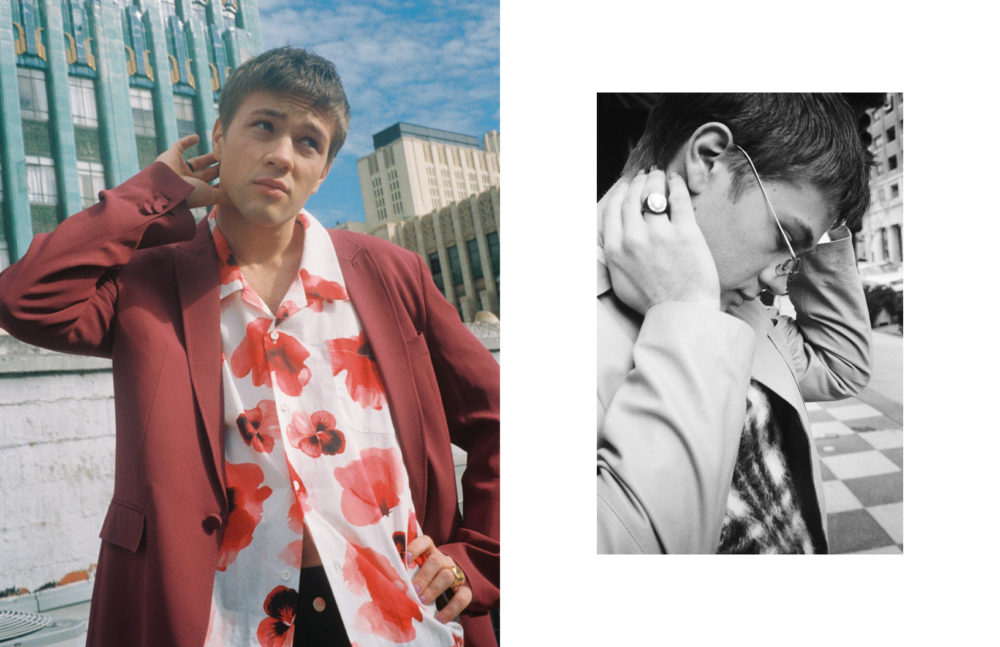 What was the most memorable moment from shooting the first series?

Toward the end of the shoot, we did a week of exterior work in Nova Scotia. Our first day there we shot a scene from the finale on this enormous cliff. We all had to wake up at 2 AM to make it to the location for sunrise. I remember standing on that cliff in a bulky safety harness, watching the sunrise, shivering, delirious and exhausted, and everything seemed so funny and wonderful. We were laughing hysterically for hours. I felt this huge surge of love for Darby, Emilia, and Jackson. I’ll remember that.

A second series hasn’t been announced yet, but now that the plot has moved away from the comics, what struggles do you think await Tyler in the future?

I love the old Peter Pan device of using fantasy to investigate what it means to grow up, what happens to people as they pass from childhood into maturity, the role of forgetting. Built into the mythology of our show is that classic idea that growing up means forgetting magic. When we meet Tyler in season one he’s already seventeen, so if we keep going for much longer he’ll be forced to confront that. I think it’s fertile territory thematically, but also emotionally, for Tyler and for the audience. If we do that right it could be really moving. 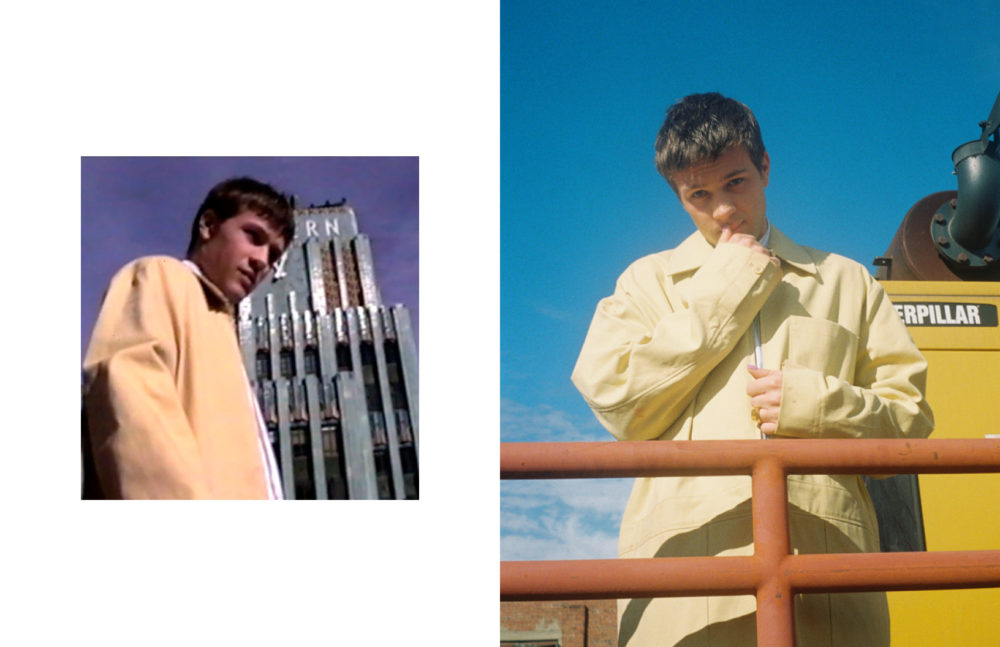 Before Locke & Key, you were on two series of the ABC drama American Crime. What’s the biggest thing you learned from that experience?

American Crime felt like my first time really working, in a lot of ways. It was the first job I booked as an adult, and it was much more demanding and intensive than anything I had done before. The show was minimal in a sense, very stripped-down. Most scenes were just two or three people sitting in a room, talking. I had never worked like that. There was nothing to hide behind. It was horrifying at first, but it became thrilling. Working in that way with those actors made me take work seriously, or it made me begin to learn how to take work seriously, what that looks like. I learned the hard way that if you don’t do your homework, you’re fucked.

Your other work includes shows like Falling Skies and films like Closet Monster. Looking back at your filmography, what’s one role of yours that you think audiences should visit, or revisit? Why does this role stick out in your memory?

I have a small role in a new movie called White Lie about a college student faking cancer. I really hope more people check it out. It was directed by good friends of mine, Calvin Thomas and Yonah Lewis. They’re remarkable filmmakers, and this was their first time working above a micro-budget scale. I guarantee everyone will be hearing about them soon. My role is tiny and I’m only okay, but the movie is astonishing. I was blown away by its confidence. It’s the best thing I’ve been in. 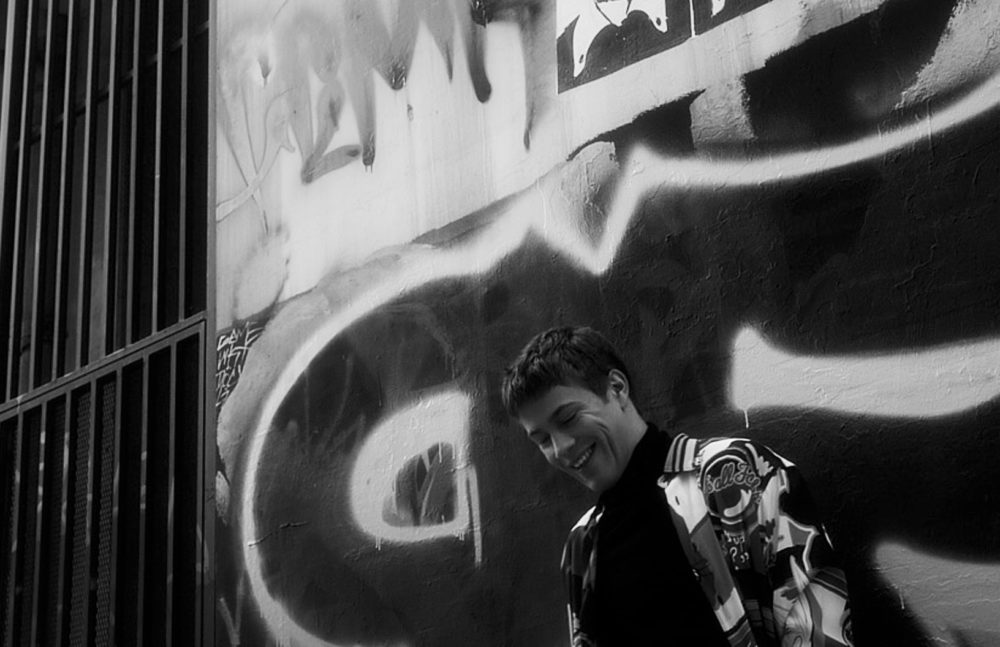 Let’s talk about your personal history as a filmmaker. When and why did you start making movies of your own?

Technically, the first movie I made was Silvereye, a DV remake of the James Bond movie Goldeneye, when I was maybe ten. That one’s lost, thank god. My first proper movie was when I was nineteen. All this tension and ego had been building up in me, and I was convinced I could do it well. The movie sucked, but I became hooked. It really is the most stimulating way to spend time. You feel 100% alive. Your whole body feels like it’s running on a different power source. It’s exhilarating.

Can you describe your creative process? Are you an intense planner or more of a “go with the flow” type?

My process is mostly painful. I wish I was more relaxed, but I really panic if I feel I’m not prepared. I’ve been working on that though, and I think I’m getting better. I trust myself a bit more than I used to. I trust the process more. I’ve learned to be more open to contradiction. Making a movie isn’t about forming a set of perfect ideas and then executing them. There’s no purity. It’s all confusion and mess. I reject an idea one day and then need it the next day, and vice-versa. I say the curtains have to be cream and then, of course, no, they end up being blue. This line needs to be whispered and then no, idiot, how could it have ever worked whispered? I’m always wrong. I used to feel insecure about the chaos because it didn’t meet the image I had of what it means to be a good director, but I think that’s where the real fun is. 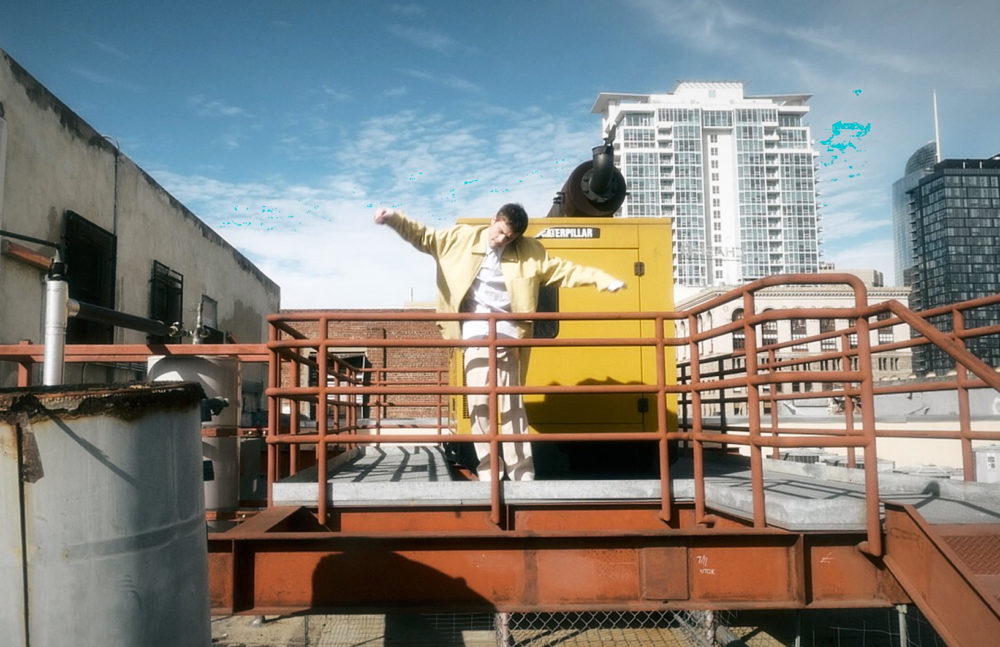 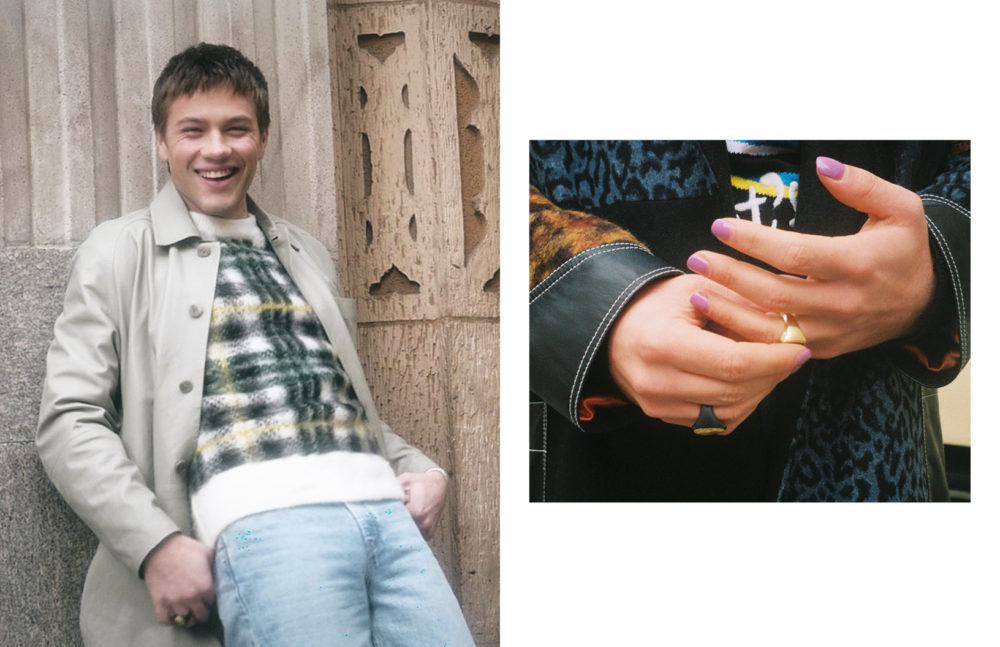 You’ve said you’re inspired by Japanese film, specifically citing Hirokazu Kore-Era and Yasujirō Ozu as inspirations. Who else is inspiring you right now, and what about them do you find so inspiring?

There are so many! The writer Zachary Mason and his ability to make myth feel personal and vital and surprising. You mentioned Japan –– the animator Hiroyasu Ishida, who made the very weird and beautiful movie Penguin Highway last year. The writer Yoko Ogawa. The mangaka Yuki Urushibara. The filmmaker Ryusuke Hamaguchi. I’m always inspired by Miyazaki. His book Starting Point had a big effect on me recently. I’m so inspired by Greta Gerwig and Céline Sciamma. Little Women and Portrait of a Lady on Fire are both lessons in totally rejecting cynicism and hipness. They’re sincere movies, which is something I’m always scared of. Sincere doesn’t have to mean sloppy, and precise doesn’t have to mean tight and ascetic. Those movies are precise and open, emotional, romantic, passionately sincere. There’s so much to learn from that. 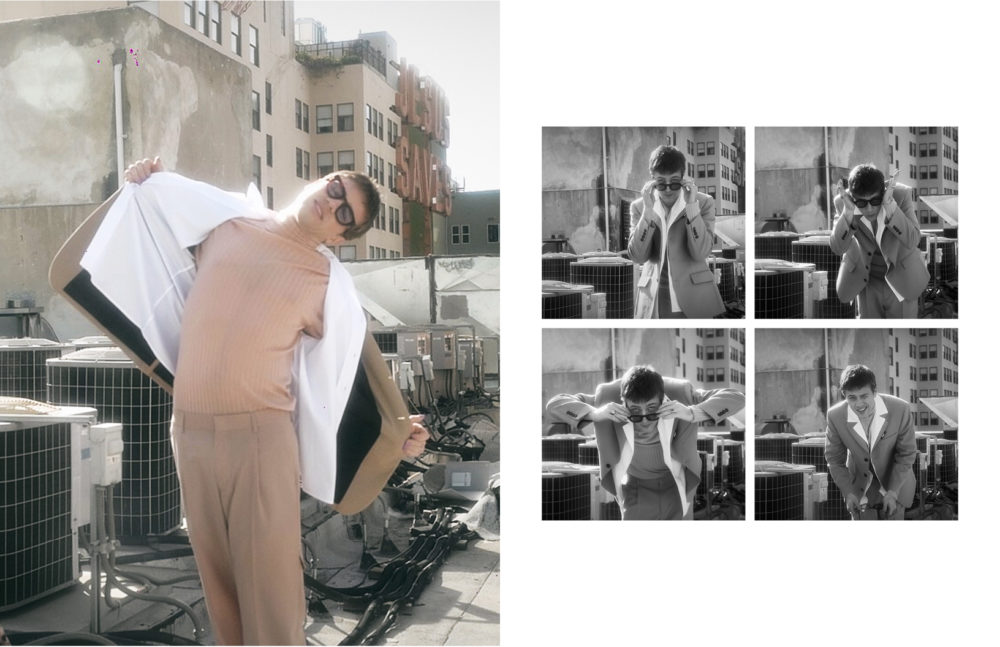 It’s a little bit the same, but mostly very different. Preparing for a role is an internal process, just you and a script. It’s a private thing. Preparing a movie is much more expansive. You’re working with dozens of other people every day. You need about ten good ideas to act a scene, but about a hundred good ideas to direct a scene. It’s just a different scope. You can’t do it alone. Acting is mostly emotional, very focused, whereas filmmaking is emotional, logistical, aesthetic, social, intellectual — it’s sprawling. There’s the same core issue of making sure you’re working from an honest feeling, but the mechanics are very different.

I’m going on vacation to Spain and Portugal with my best friend in a few weeks. I’ve never been, so I’m really excited. We might have some wine while we’re there. 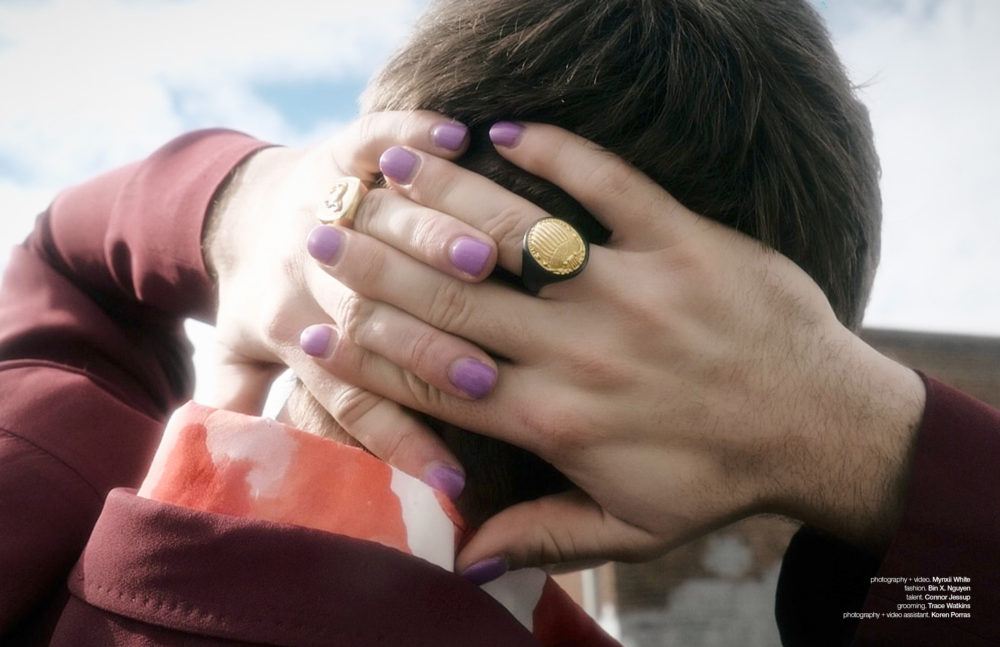