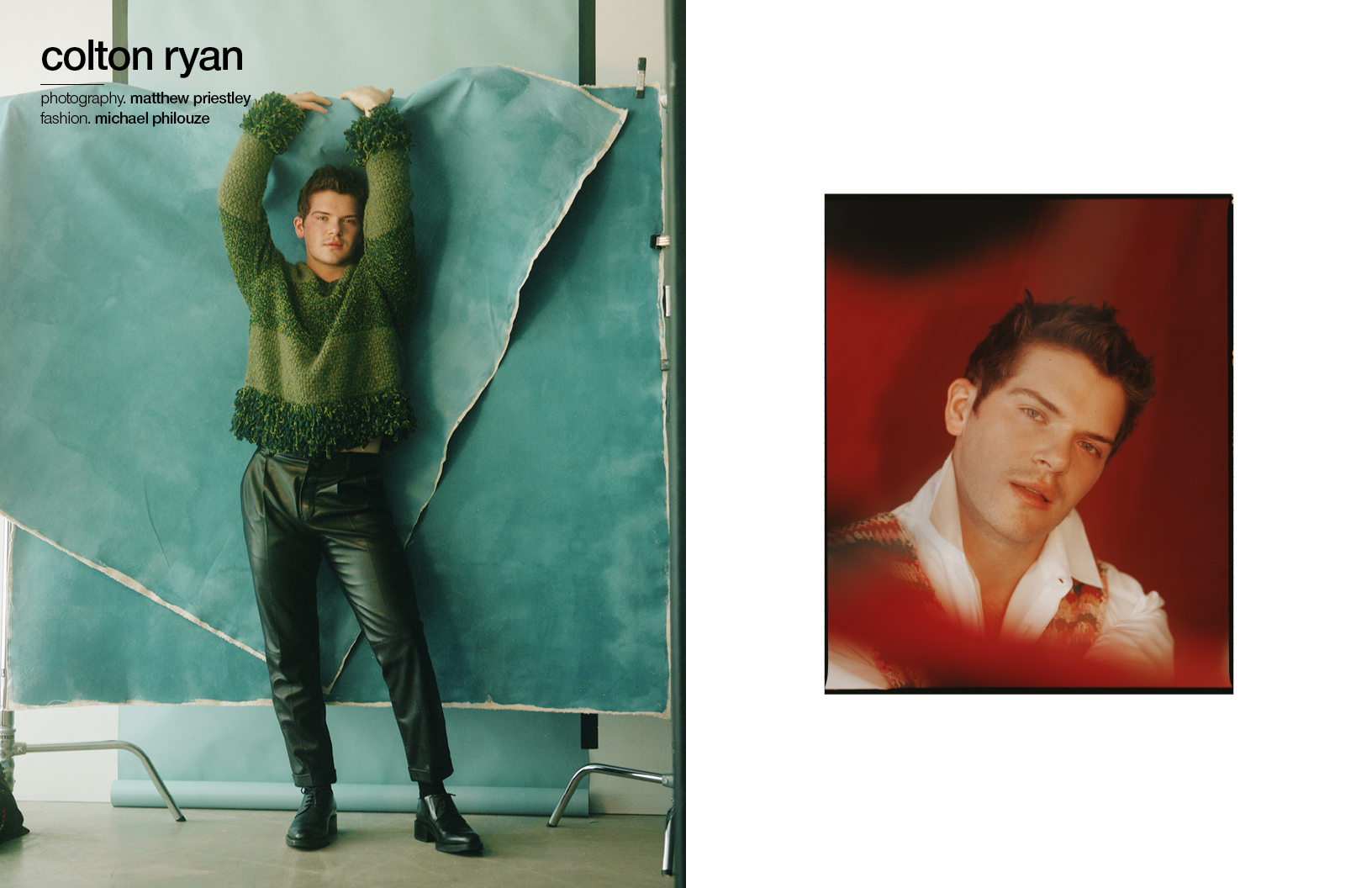 Following a moving performance in Dear Evan Hansen, Colton Ryan returns to your screens as Conrad Roy in Hulu’s series, The Girl from Plainville. The series aims to reclaim the devastating story of Conrad Roy and bring attention to the mental health struggles of our youth. The actor now joins Schön! for a heartfelt conversation about his love for acting, his childhood and the actor’s life goal of becoming a father.

You attended the School for the Creative and Performing arts at just grade four. When did acting become your dream career? Is there a story behind the moment you decided to pursue this career?

I’m not sure I could describe it as my dream career as it’s more essential than that. The ‘why’ of it has morphed so much over the past two years. When I was without it, or without the mandated time to use the creativity muscle, I felt weak. I was trying to decipher why, and I remembered my ‘origin story’ of how I came to be in my first play. It was Oliver! and the auditions came right during my return to school from a very tragic event. And because SCAPA was so small (and lovely), everyone was looking at me quite a lot, worried over my well-being. And as beautiful as that was, it was also overwhelming, especially for a little introverted Gemini! With little experience, I was cast, I’m sure, as a way to keep me involved. But that show really gave me my lifeforce back. And at 26, I finally know: it gave me the control in being seen, for the people I wanted to could see the pain, the joy, and everything in between. And if it was ever too much, I could wink and say, ‘that was just the character’. 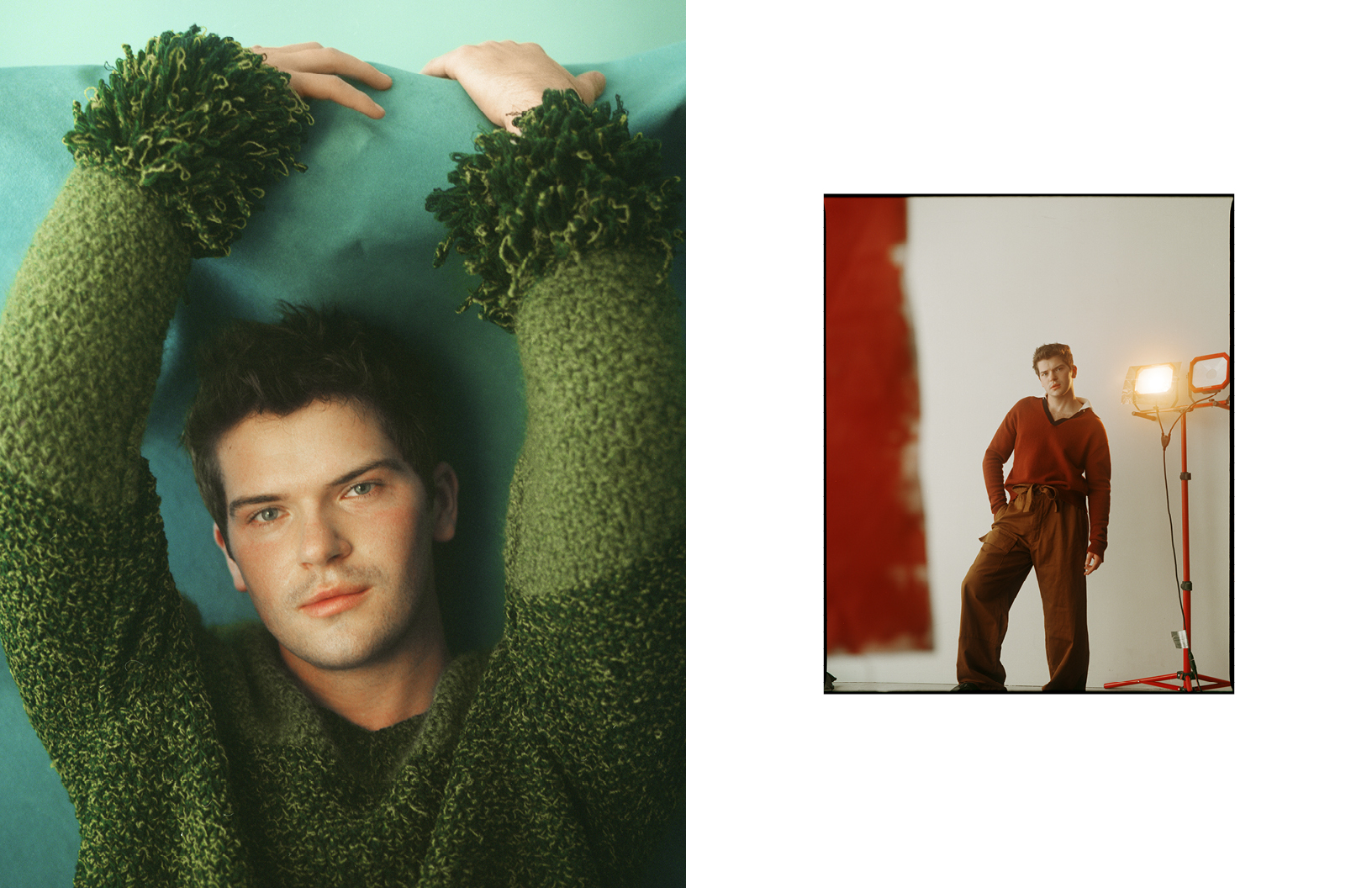 You play Conrad “Coco” Roy III in The Girl From Plainville — a series based on a tragic true story. What hurdles did you face as an actor in performing such a challenging role?

Just the doubt. It meant so much just to be asked. Here is the boy who the world has written off as one thing, specifically his ending, and here’s the call to arms to reclaim his story. The honour in that was enough to make it all simple. And as I got to know him more through my research, he made it all easy. Because it was so easy to love this boy. So the only hurdle was that it was five months and long days, and that amount of time makes you wonder if you are really getting out of the way enough. But if I’m being honest, those moments were so few and far between. Getting to make this, and getting to know him, was one of the most affirming things I’ve ever done.

Why do you think our readers should watch The Girl From Plainville? What makes this series special to you?

Because it’s taking something that’s hyperspecific, and using our zeitgeist fascination with it to ask something very universal: is living this way good for us? These two young people looked for themselves online, which is now the accepted future we have given all young people. The ending is too tragic to ignore. It’s a warning. And I think the show takes pause to ask if we are all complicit in some way. This case may be specific, but, unfortunately, it’s not unique.

What drew you to the role of Conrad Roy?

It wasn’t so much what drew me to it as how much I grew to love this kid while getting to know him. The story, as it was told before, would have him be remembered as one thing, and it really revolves around the ending. But my research got me closer than most, besides his loved ones. And I was so taken by his goofiness and his mischievous nature. He also had a really removed observation of the world, and for that reason, acquired, in my opinion, a very healthy cynicism of how it operates. He was best friends with his mother, and embarrassed his sisters by playing hard rap when driving them to school. It was just easy to feel like you knew this kid. In many ways, I felt like I grew up right next to him. 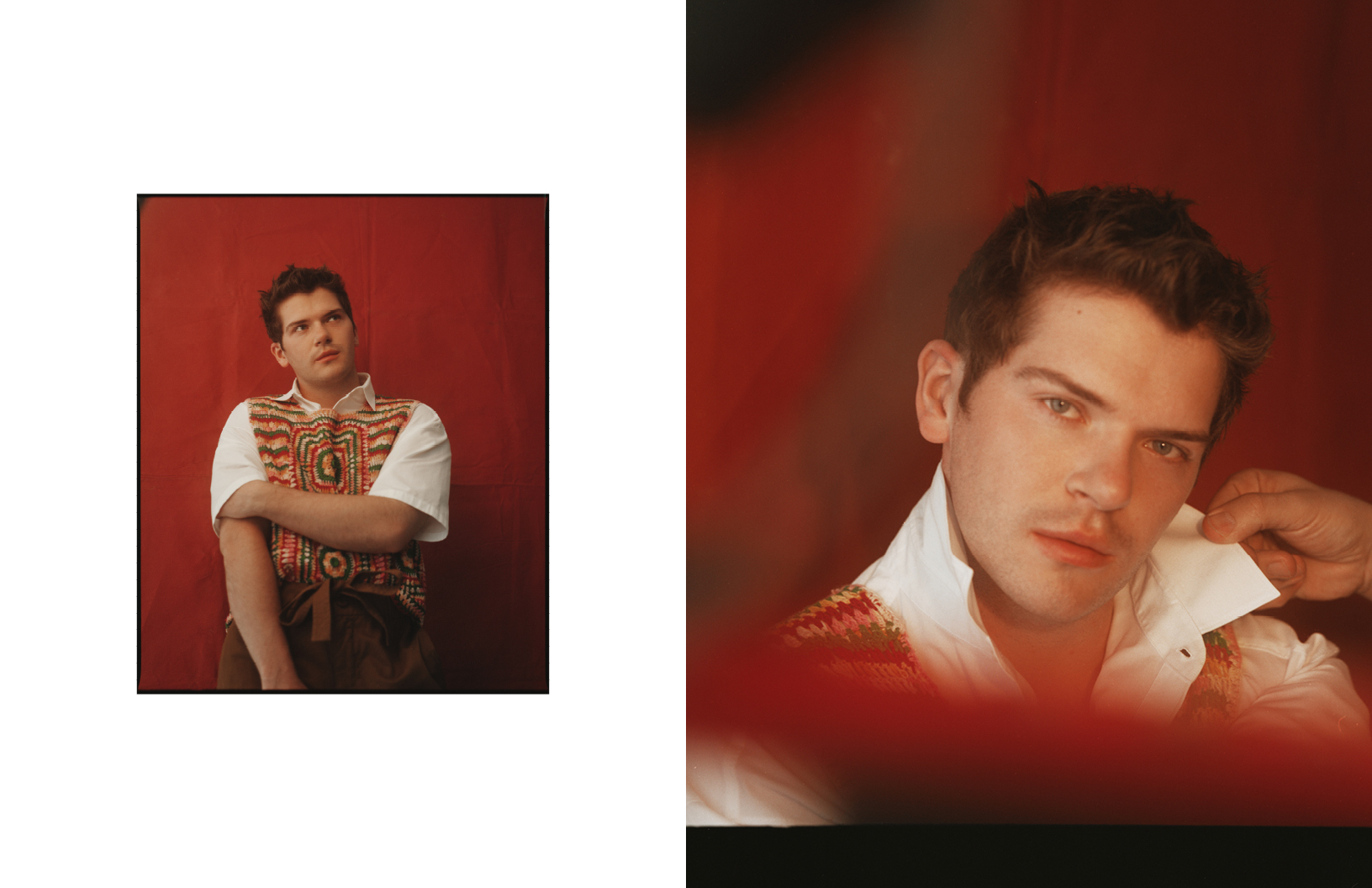 What kind of roles are you interested in pursuing that you haven’t yet?

Well, I’d love to keep working on things that are as intentional as this one. I had a mission and it was to introduce Coco again, but as he truly was. The profound part was how much it, and he, changed my relationship to myself. In terms of future roles, I don’t want to write my way into a box. Except maybe a comedy. It’s been pretty heavy for a minute. Or if someone didn’t know that I’m a huge Lynch, Kaufman, Nolan, Nathan Fielder, Janicza Bravo fan and grew up as a comic nerd (*clears throat while saying Marvel and/or DC — I like both and want to hedge my bets, ahem*), that might be a lovely thing to put out there as well! Or Watchmen if they do it again. To me, that might be the greatest piece of television I’ve ever experienced.

Have you picked up any new hobbies in the last year? What are they?

I didn’t take advantage of growing up in Kentucky enough, but my second chance came in the pandemic. We stayed with mom for some time, and I don’t know what it was, but the city boy part was gone. I would find any excuse to be outside, which brought some newfound hobbies. We go skiing and hiking and rock climbing and we play tennis now. Once I got back to the city, I stopped taking the subway and biked every day. My best friend Mike and I started a standing appointment of about thirty miles every Tuesday. It’s been a lovely time to reacquaint myself with things that purely make me happy.

There is little doubt about your love for theatre. What is your all-time favourite play, and why do you like it so much?

That’s too hard! Favourites are so wishy-washy in my opinion because I’m so influenced by what’s on my mind. So my favourite right now is something I just saw the other day at MCC called Which Way to the Stage, but a couple years ago it was What the Constitution Means to Me, and before that, Octet. And that doesn’t include all the classics that shape my taste, from Night Music to Rosencrantz and Guildenstern… But if I had to pick one: Cyrano. I used to own the DVD of Kevin Kline’s version from that PBS Great Performances series, and I would revisit it anytime I felt I was being too hard on myself creatively. But I recently saw James Mcavoy (who’s an artist in the truest sense that I could only pray that I get to be in the presence of at some point) play it, and it’s extraordinary. The adaptation alone reminded me how vital and everlasting theater is. Okay, I’m hearing myself and I’m seeing why there is little doubt. 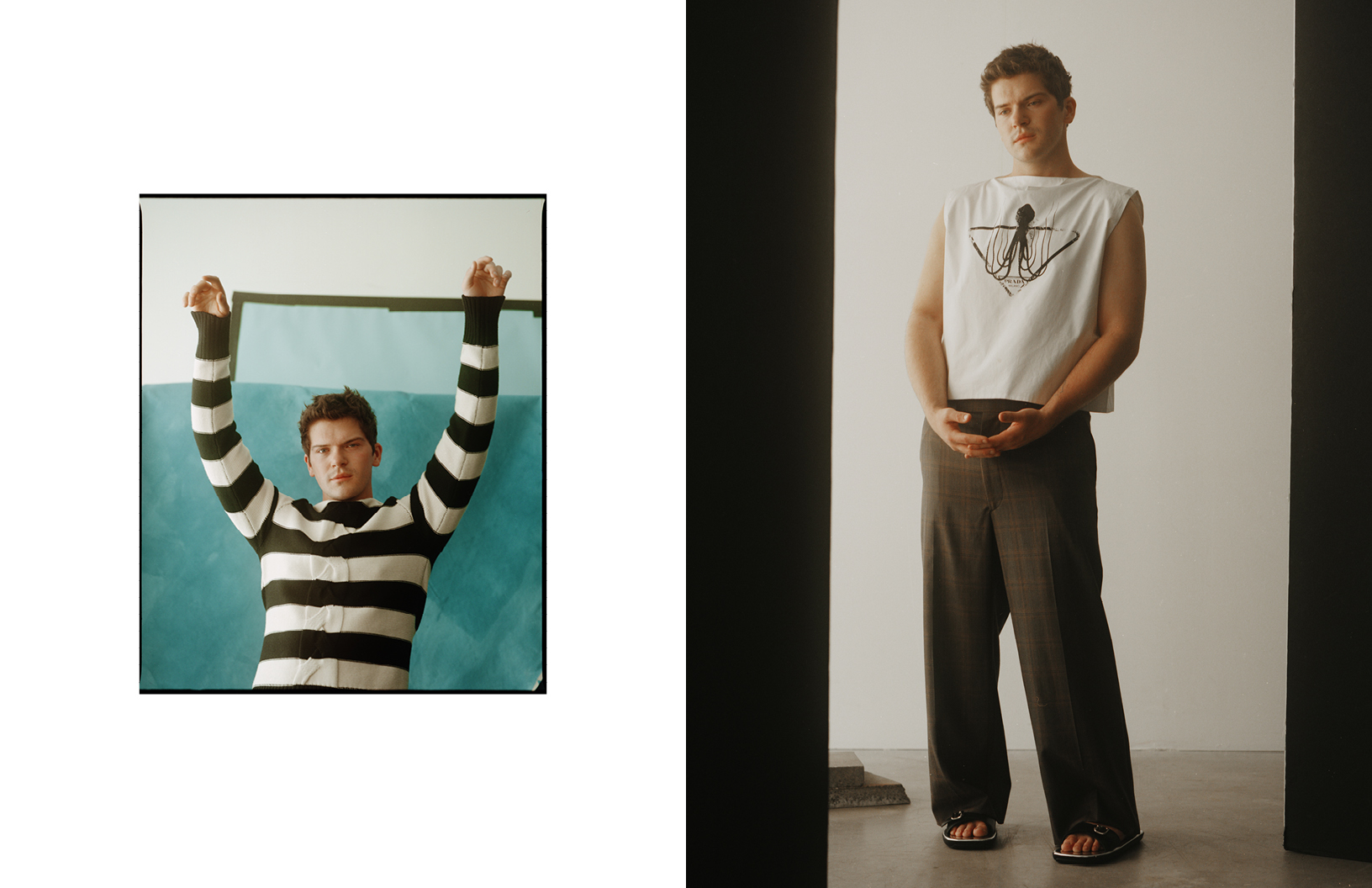 Many of our readers will know you from Dear Evan Hansen. What was the most memorable moment from working on that film or the production?

Shooting the Sincerely, Me sequence was pretty amazing. Life was so scary and boring in lockdown, and then all of a sudden, I’m shooting Singin’ in the Rain homages and go-kart races. But it was the cast bonding that made it special. Ben, Amandla, Kaitlyn, and Nik would all come over every Saturday for mandatory hangouts. And they were mandatory because otherwise, we would continue to have no connection with the outside world. The shoot was pre-vaccine, so our Olympic Village became the first human connection a lot of us had. And for that reason, we just got deep quick. And they all hold a special place in my heart. As does Beefeater Gin. And Rivergate (if you know you know)!!!

You have previously mentioned that you become emotional when watching Dear Evan Hansen. Why is this story so dearly beloved by you?

It’s probably just too romanticised in my life. The Broadway production was my first big job and it was the reason I moved to New York, which is my home-home. When I played Evan and Connor (I was the understudy), everyone that I loved most in this world saw me do it, and for many it was a doubling-down of their faith in me. But when I closed that chapter, I meant for it to be permanent. When it came back, it was a couple months into the pandemic. Lockdown had been hard, but I think I really found myself during it. So when I read the email in my inbox, I felt a strange sense of calm about it, even a sense of understanding why it was there. I had played Connor as a troubled young man, and now I could play him remembering what it was like to be that. Seeing it all come together was just too overwhelming, critics be damned! 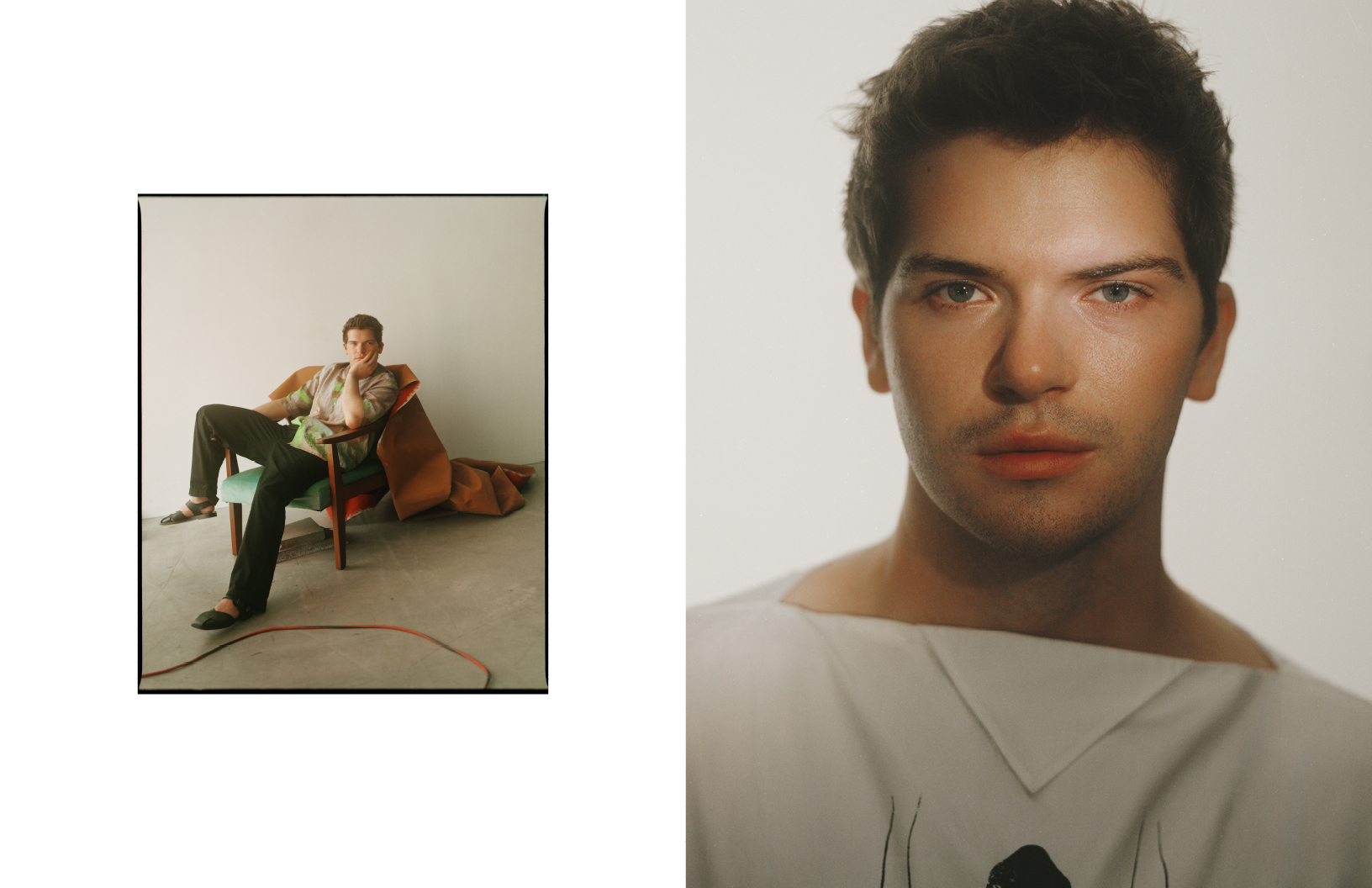 What else has been holding your interest recently? Books, movies, art, etc.?

I hate to say it in a fashion publication, but….fashion. For my first run-up last year with DEH, I ended up styling myself, which took forever (and longer story, got me in trouble with customs!) but ended up being an extraordinary exploration of how important the art of expressing myself was. Part of the job is going out and talking about the job, and the precedent is that you dress really nice when you do so. I find that part very silly, and it became easier to justify when each time I put on clothes, it felt like I knew what it was. Whether it’s as simple as wearing Bode embroidery and vintage Tony Lama cowboy boots that my partner’s dad gifted me to SXSW to feel the connection to myself and the South where I grew up and my home in New York and how Austin is a nice blend of all those things yada yada yada, or it’s just looking good! I love how it’s just for me, but the presentation is quite literally for others’ eyes only.

What are your plans for the near future? Any new projects that we can look forward to?

Nothing I can say right now, but the thing I’m most proud of is that I really feel like I’m starting the life that I’ve wanted to live. I just bought a home, and Adrie and I are planning our lives together. I want more than anything to be a father. I think that’s the role I was born to play. But to all of our families reading this: don’t panic, this is not an announcement! 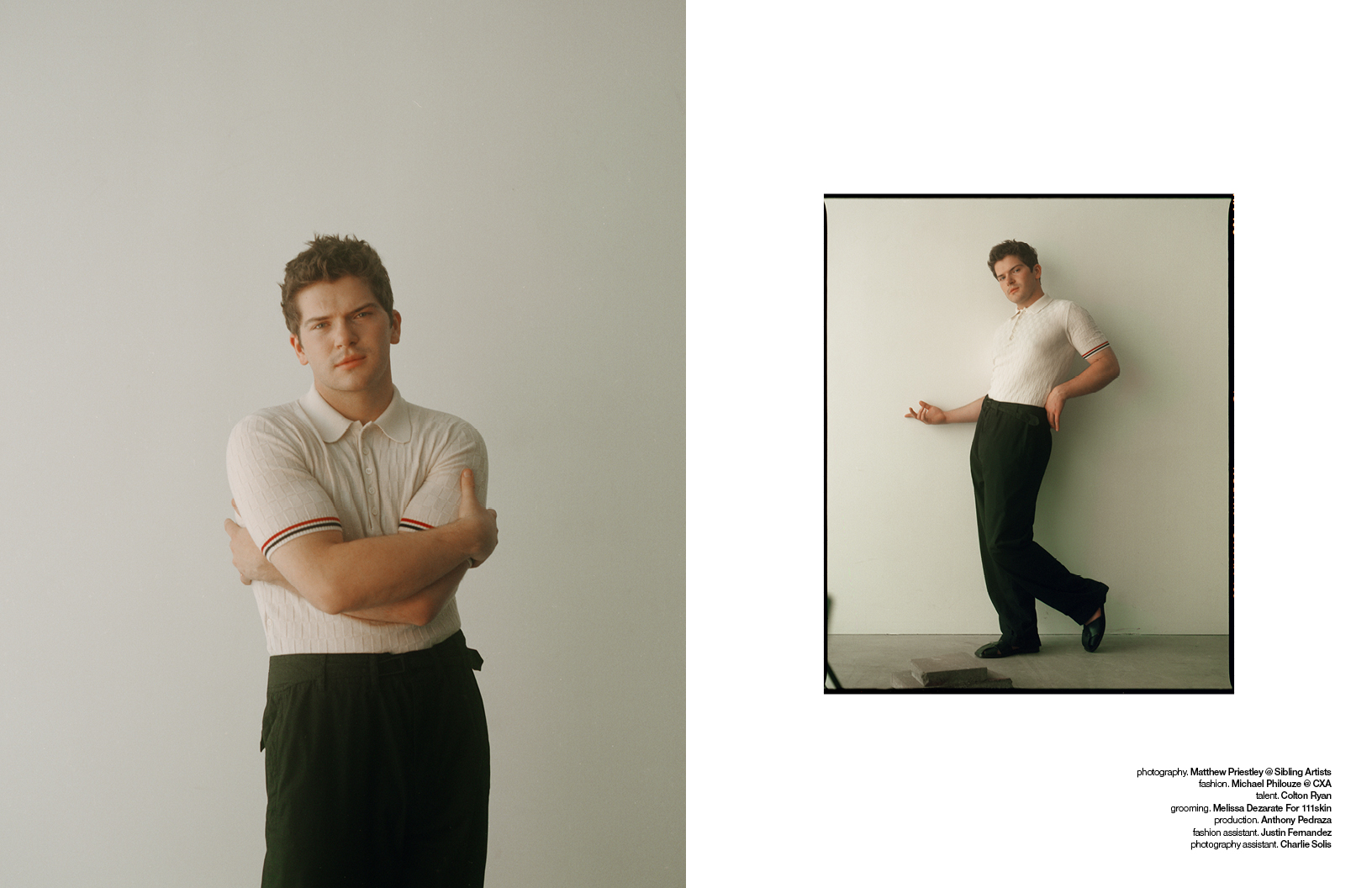 The Girl from Plainville is currently streaming on Hulu.