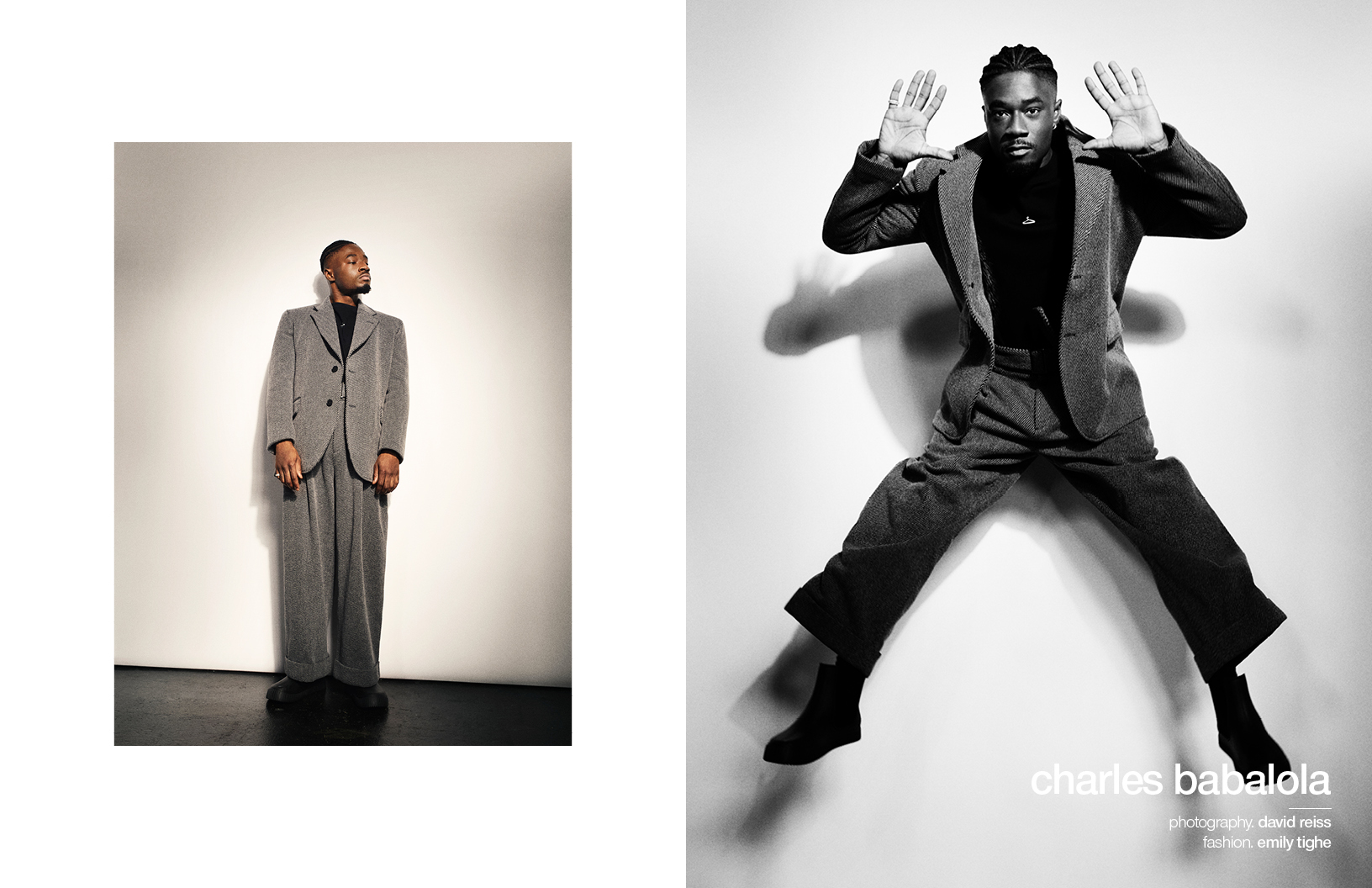 Meet Charles Babalola, the rising star and featured character in the BBC One series The Outlaws. Along with this Stephen Merchant-created show, Babalola is also going to be featured in the new Borderlands film in early 2022, based on the ultra-popular video game. Schön! dives into his world and talks about his acting career, his life in London and about his love for sneakers.

Hello! So nice to meet you. What inspired you to become an actor and study drama?

I went to an all-boys Catholic school in East London and we didn’t get to study drama until year eight. I just remember my first few lessons and feeling right at home with acting and the feeling that it gave me. I always had a confidence doing it, and as I went through the years at school all the way into college, it was something that grew stronger in me and something I got better at with each year that passed. Acting was always a freedom of expression, and that sat better with me than the academic side of things — so that’s what drove me to become an actor.

You star in The Outlaws. Can you introduce our readers to your character and what drew you to him?

Yes, The Outlaws is out now and on BBC1 every Monday at 9pm and then you can catch the whole thing on BBC iPlayer. I play a character called Malaki, and he’s a street kid from Bristol who is a product of his environment. He’s a very calculated and clever character, and we see this in the way he interacts with other characters in the series and how he manages to manipulate people for his own benefit. Those characteristics are really fun to play as an actor.

The series has an incredible cast and writers. How was it working with your co-stars and on this project? What did you take away from the experience?

It was a great ensemble cast to be able to work with. There is a certain set of actors I did most of my scenes with, but I also dipped in and out of working with everyone on the show. I learned a lot from everyone on set as everyone has a different acting style and approach. You can really learn a lot from acting alongside those different styles, and I just try to keep learning in every job. I also got to learn some of the fundamentals of comedy acting in this role, which I’ll take with me going forward. On top of that, the cast and crew were just amazing. We worked on this show (and series two, which is almost done) for a long time, with COVID delays and such. It was almost a year, so it was important that the energy was right between everyone, and it definitely was on this show. 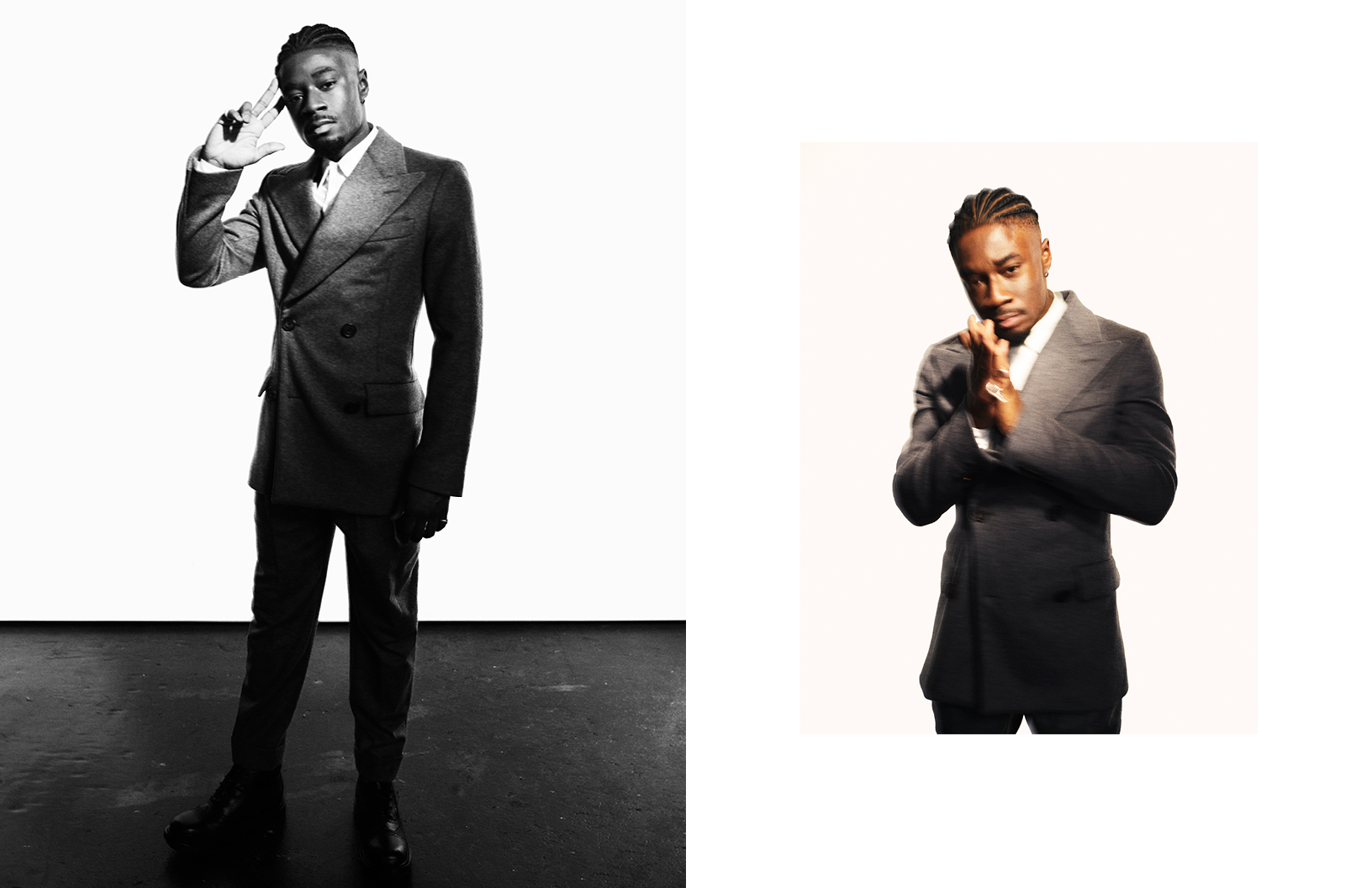 You’re also going to be in the new film Borderlands, based on the video game. Are you a gamer? What are some of your favourite games, or just ones you’ve been enjoying recently?

I’m super excited about Borderlands coming next year. But the funny thing is that I used to be a massive gamer back in the day, but as the years have gone on and I’ve gotten older, I’ve slowed down a bit. Which is interesting, because actually all my boys are still massively into gaming. Every night in the group chat, they’re all still messaging about who’s up for playing Call Of Duty, but it’s not my thing. My game was always FIFA with my homies. On a Friday night I used to go to my mate’s house and all the boys would be there playing tournaments and having a few drinks. FIFA holds a special place in my heart, as I’ve been playing it since FIFA ’97. I’m a huge football fan and that’s my game. In the early 2000’s there was a game called Need For Speed, and I also loved Grand Theft Auto San Andreas. That’s one of the greatest games in history. I’ve got so many amazing memories of playing that with my little brother back in the day.

I only had a few weeks to prepare to play Hammerlock, so not a huge amount of time to actually think about it too much. I’m playing a character from a massively popular video game, so I obviously wanted to honour the perceptions that the Borderlands universe has of this character. Hammerlock is a really popular character in the game, so it was important to me that I speak to as many people as possible to get into that character. I spoke to the director and also the creator of the game to get some insight into how they both saw him. I also looked at the physicality, the personality and the mannerisms of Hammerlock, to be as truthful to that as possible. But ultimately, you want to come with your own idea of who he is. So it’s ideally an amalgamation of the character in the game and the actor’s vision.

Who in the industry do you look up to, and who are you dreaming of working with in the future?

I’ve got a lot of people I look up to and want to work with, but here are a few that spring to mind right now. Steve McQueen is definitely one of my favourite directors. For me, he’s the finest director working in the UK today. Stephen Graham is someone I’d love to work alongside. I absolutely love him as an actor and I’ve loved what he does for years. I really respect the choices that he’s made as the years have gone on as he just has that pure, truthfulness to his performances which I really admire. 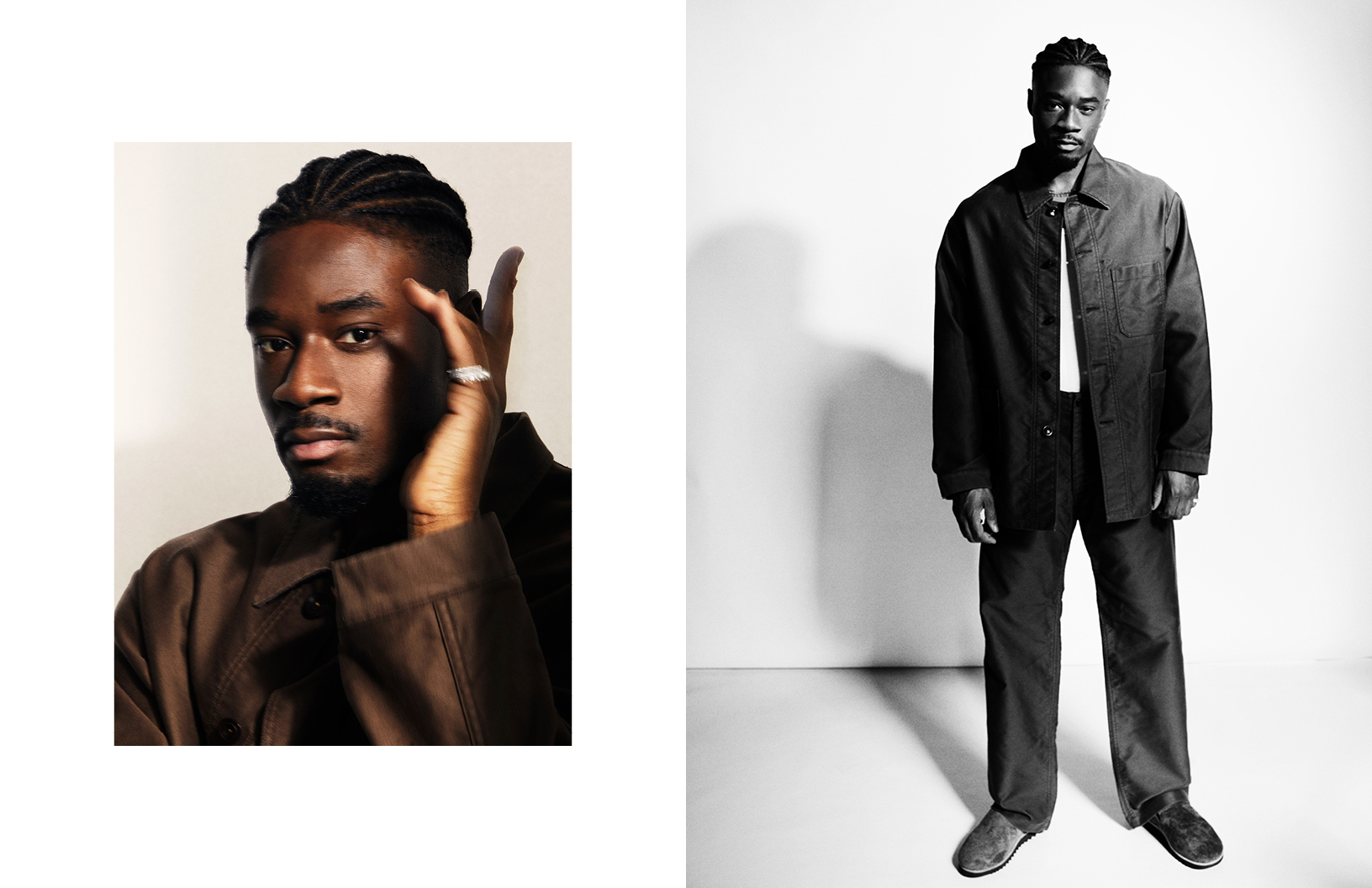 In your Instagram bio it reads that you’re a “Sneakerhead” — what is your go-to pair these days? What is your favourite sneaker brand, or one you enjoy following?

I’ve always been on my Jordans. Jordan is my go-to sneaker for sure. I’ve been collecting them for 10 or 11 years now. Jordan 1’s, 4’s and 6’s are my favourites. I also like Vans for skating — they have the perfect grip for skating. I also have some SB Dunks. I got my first pair of Dunks in 2003 — they’re just a fly drop.

Growing up in London, what are your favourite places to go to in the city? Any secret spots you would recommend?

Everyone knows that I love London — that’s my city. The Southbank is one of my favourite places in London….I have so many great memories there. I remember going to the National Theatre on school trips and thinking, ‘this place is really cool’. Back in 2017/18 I performed there and I remember thinking, ‘this place has a cool energy’. With Blackfriars on one side and Westminster on the other—– there are just so many great places around there wherever you walk. As far as a secret spot…..there’s a place called Gold, a restaurant in Notting Hill. It’s one of my favourite restaurants in London. Amazing food and amazing staff, and who doesn’t love Notting Hill!

When you’re not acting, what else do you do to keep busy?

When I’m not acting, I just love spending time with my friends. They keep me grounded and I learn a lot from them. It helps me decompress from the acting world and not talk about any of that stuff. Watching football is another love of mine. That helps me chill and relax and again take my mind off everything else. I also love going to the cinema on my own. I just love getting fully immersed in a movie and enjoying that whole experience.

When you’re not in London, where do you love to travel to and why?

New York! I love New York… it’s just VIBES! Copenhagen as well — I’ve been there quite a few times as I’ve got friends there. Copenhagen is such a dope city. Great people, good transport and fun shit to do in a city. A theme park in the middle of the city as well. Tivoli Gardens is dope!

What else can we expect from you in the future?

Growth in my work and growth in the projects I’m working on….and hopefully more good work. 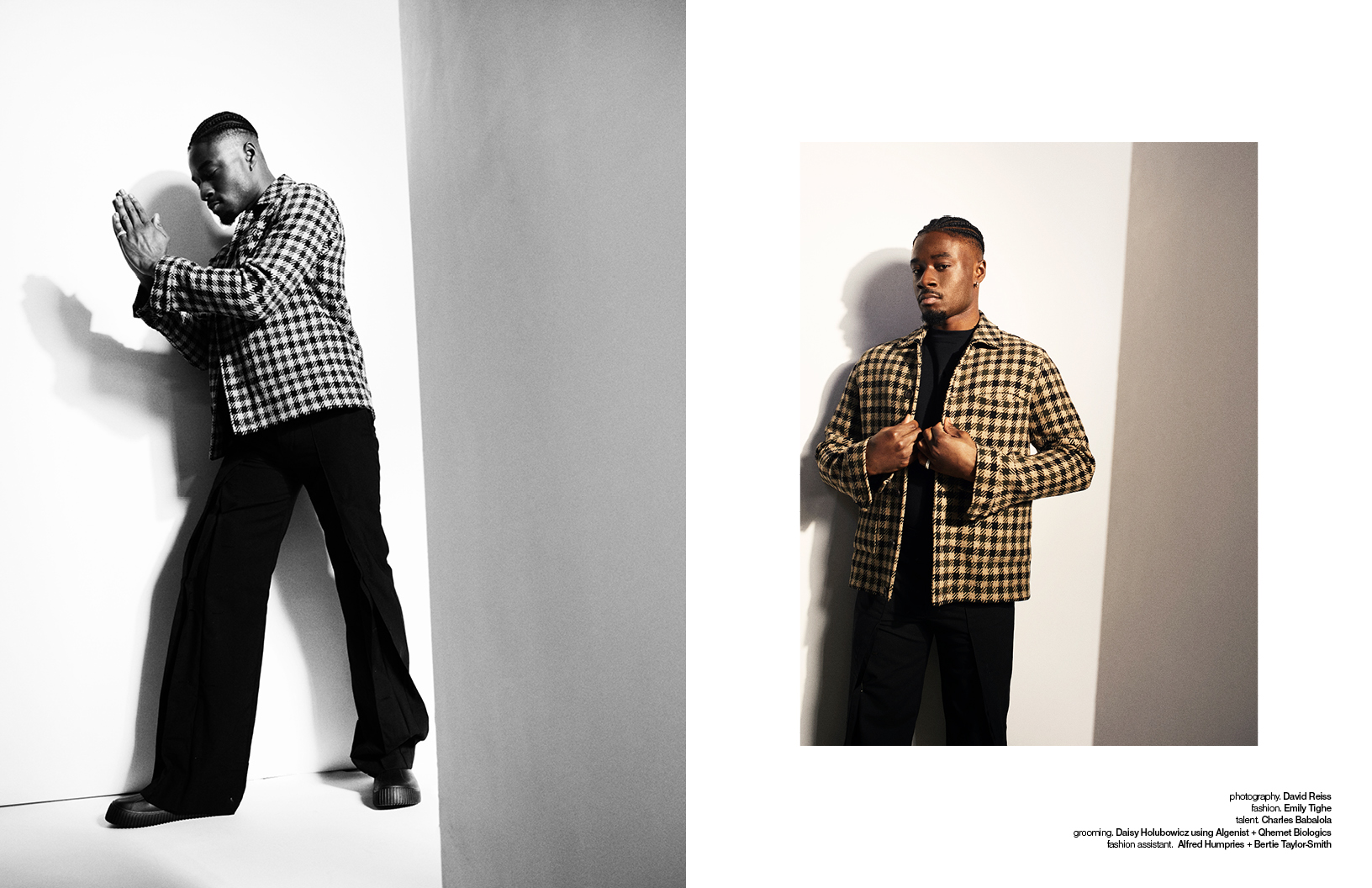 jacket. This Way Next
trousers. Stylist’s own
shoes. Emporio Armani

The Outlaws is current available on BBC One in the UK and Prime Video internationally.