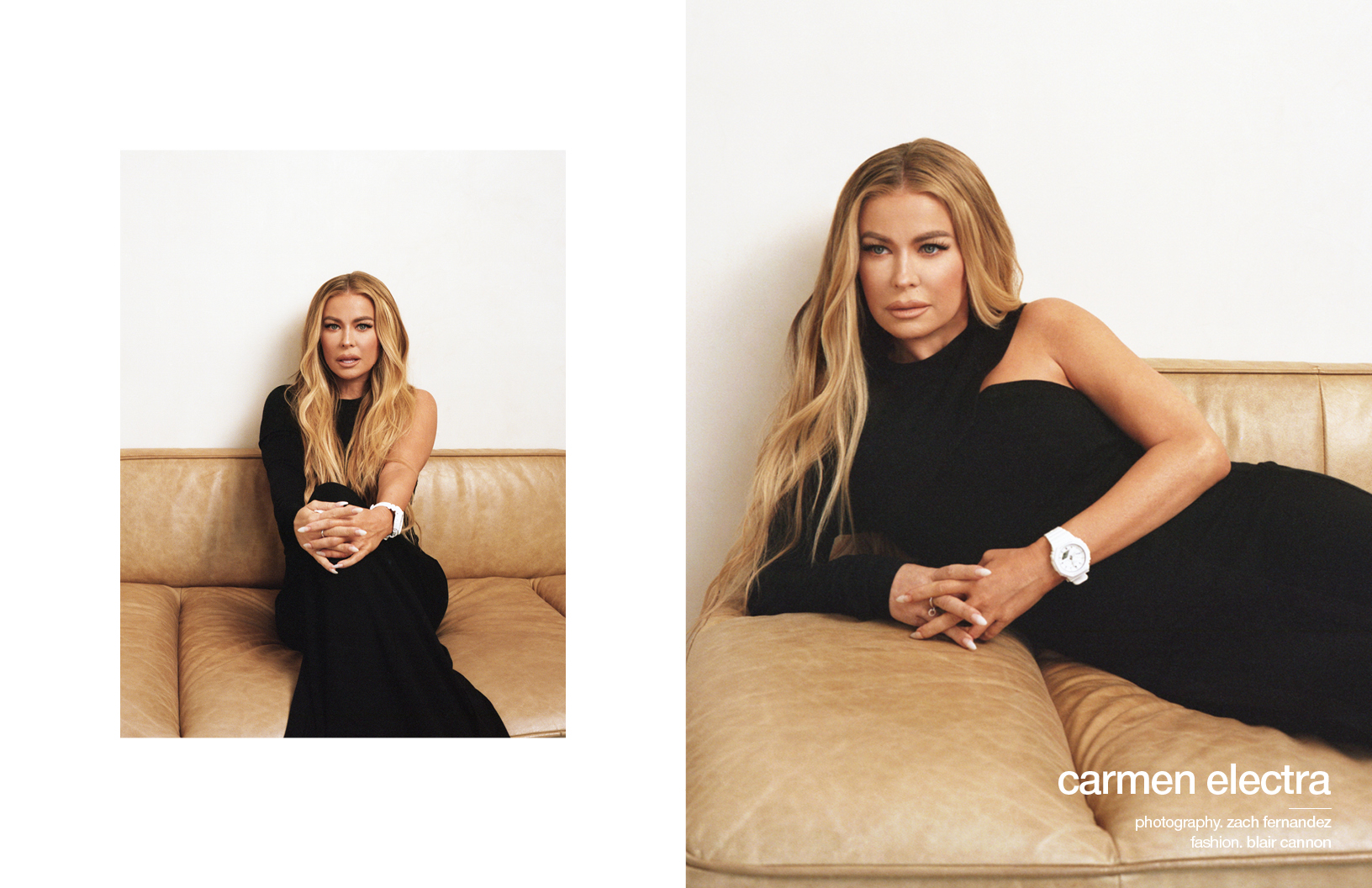 After catapulting into the hearts of people all over the world from her work with Prince and appearance on the show Baywatch, Carmen Electra became a global icon. She acted in numerous films, hosted a show on MTV and even published a book in 2007 entitled How to Be Sexy. But behind the scenes, Electra also experienced considerable hardships; she lost several people close to her, had her privacy violated by persistent paparazzi and fell victim to some of the many pitfalls that come with having such an explosive rise to fame. Now, Electra can look back at those moments with a clear head — and look forward to a stunning future. Electra joins Schön! alongside the G-SHOCK GMAS2100-7 to discuss the past, her loving social media followers and what’s yet to come.

Hello Carmen! So nice to meet you. Simply put, how has this year been?

You know, it’s been… Since Corona started, we’ve all been very careful, taking initiative and taking steps to not only protect ourselves but to protect others. With everything that I’ve been shooting you’ve had to get tested, and it’s just been a gradual flow onto the next phase of what this is going to be, and what the next year will look like… Now, I’m just doing a lot of shoots and social media, which is great because I was a little late on the social media bandwagon. I just thought, ‘well, I don’t want to look at myself all the time!’… So now, you know, I just sort of learned IG, although it’s ever-evolving, and I’m keeping up with that.

When nothing was going on, everyone’s situation was different, but I would always tell my friends and people that I know to just keep learning. Keep learning something new, or learn something that you’ve always wanted to learn because there was finally time to do it.

I want to talk a bit about The Last Dance. How was it, going through and reliving that time again?

It was so awesome to watch and be a part of. Luckily, when we started shooting, they brought in a laptop so they could show scenes from the time, and that really brought it to life for me. I think it was a really good way of bringing back some of those memories. 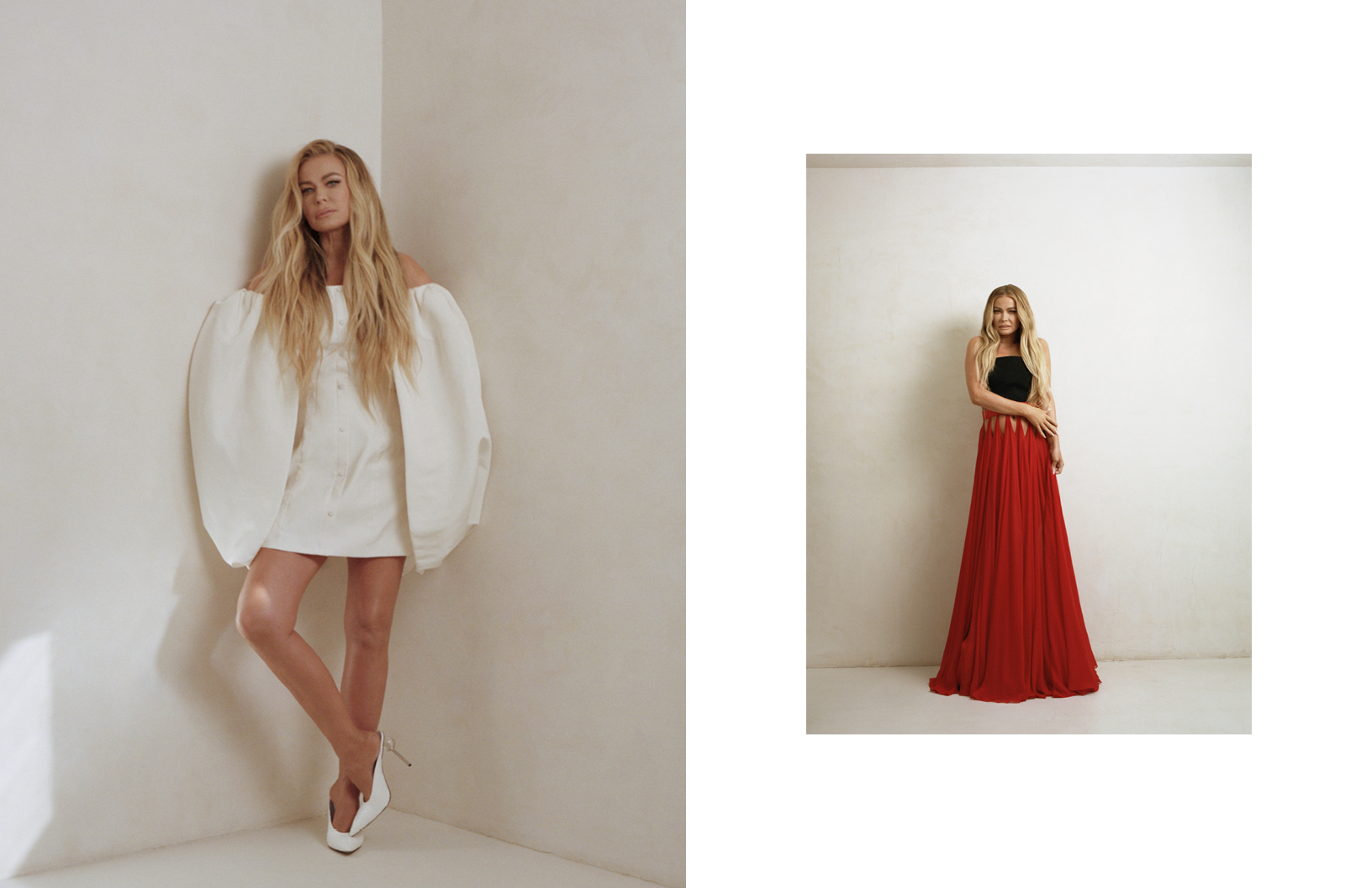 I have to commend you for being so positive and honest about everything that you’ve done in your personal life, because I know that you’ve had your privacy invaded in many ways after being in the spotlight for so long. Being able to manage all that with a smile is something my brain can’t really comprehend.

Yeah. Now, the business has changed a lot, in many ways. Most people can see that… But I started when I was five years old, and I was doing commercials and print work and dance after that — it was like going to college when you’re nine years old. Sometimes I see nine-year-olds now and I’m like, ‘whoa, how did we handle that?’ But it was kind of a ‘grow-up-fast’ thing.

Since then, my life has always been changing. I’ll work on music, then get back into acting — I’m reading a lot of scripts right now and am really excited to get back into television and film, because it’s been a minute. It hasn’t been too long but it’s been a minute. Then with COVID… I got to do a couple things that I wanted to do, because I’ve always been so focused on working and working and working and working, nonstop. That’s kind of how I was raised in my school and with my parents… We were very, very blessed, very lucky in that way just to have a little bit of time for ourselves again.

You mentioned that you’ve seen the industry changing. It does seem to me that celebrities are now being seen more complexly, maybe with more respect. I’m wondering, how have you felt that change from the inside of the industry? How do you think the way people see you has changed over the years?

I’m not sure the way people have seen me change over the years. I mean, I know how I’ve changed. But that’s an interesting question. Hopefully, people have seen me grow with the times. I think you just get a lot smarter. In the beginning of my career — I think in everyone’s career — it was just trying to move forward. You’re really, really working hard and constantly auditioning, pushing and taking your meetings. Every day, every single day, you’re wanting to push forward with your career. And I just made sort of a deal with myself that that was going to happen, you know? I did go through some hard times where I didn’t have a lot — counting change to go to a pay phone, or staying with any friend who would let me stay with them. But they all believed in me. They all really, truly believed in me, which was a beautiful thing.

In the beginning, I was nervous. I would run out of auditions scared to death… I was painfully shy. And then I got to the point where I had to get over that. I remember the moment, too — I was going in to audition for MTV, and I had to get over the shyness fast. I had to. Now, I don’t know if I’m shy anymore. It went away because MTV gave me that venue to be free and fun. It was sort of my college, in a sense. MTV was my college, and it was a good one. 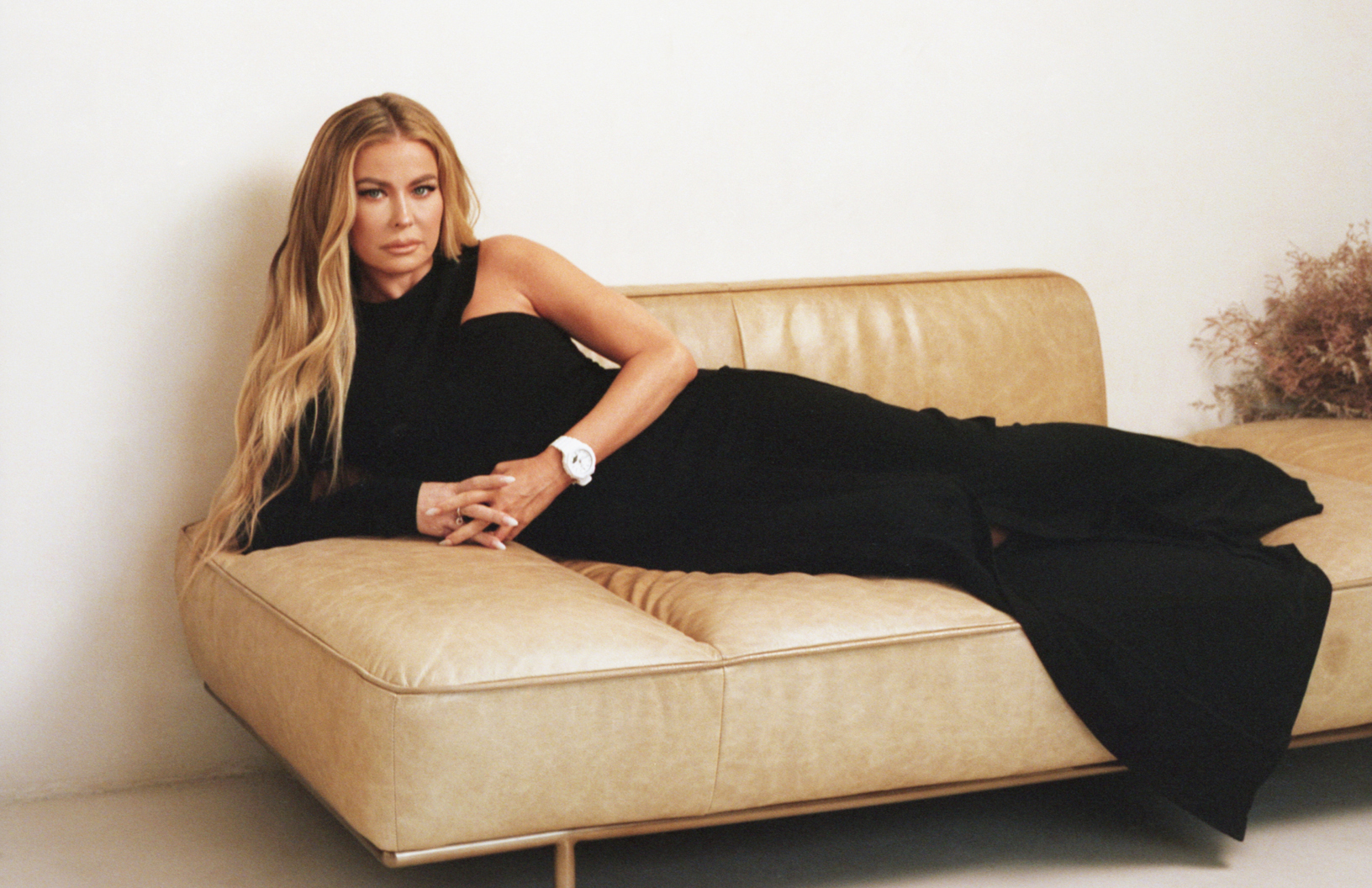 You mentioned your struggles, and I know that some of these came at a time when you were seeing incredible popularity. You lost your mother and your sister very close together, while at that same time you had tabloids following your every move. That just seems crazy to me.

It was such a strange thing with tabloids. Just coming from where I was from, I just didn’t really think about it when I was starting. But if you make it, and as far as you make it, you will be in the tabloids. No matter what. And they may say things about you that are not true. They may have things wrong. They may be partially true; they may be 100% true! But there’s no one there to really teach you about that, except for maybe your publicist. And your publicist would usually get a little angry, a little upset with you back in those days.

You’re kind of growing up in the public eye, and so you’re learning firsthand… And after [my mother and sister passed], that was really hard to deal with. People would always ask, ‘why were you ever with Dennis [Rodman]?’ First, that was real. It was all real. It wasn’t a publicity stunt. But that was around that time, and as soon as I made the choice to go to visit him — I mean, he had my number and I was ignoring him and ignoring him, and I was still working, you know, finishing off Baywatch for that season. I don’t know how I ended up going to see a game, but I thought, ‘okay, well, it’s simple. I’ll go see a game, then fly home.’ But then we just sort of became attached at the hip.

This is a left turn, but I have a ton of family in Minnesota and they would kill me if I didn’t ask you about Prince — but I also know you’ve answered a million Prince questions in your life, so I’m trying to find a different angle on this. Do you remember the most memorable meal you had with Prince?

Memorable meal. Hmm. You know what? I think it’s just that I learned how to make tea with him… I remember he wanted me to make him tea. He said ‘chamomile,’ and it’s just the most simple thing you can ever make. It’s so simple. But I was, you know, 18 or 19 years old, and I had never made tea before. He had these teas, and I was just in the kitchen like, ‘okay, which one is it?’ I was, like, shaking. But he also liked scrambled eggs. He liked pancakes, and he would teach you how to make them the way he liked them made. And then sometimes, you know, ask for breakfast. You know, not all the time, but sometimes ask if you would make him pancakes and eggs and bring them over. 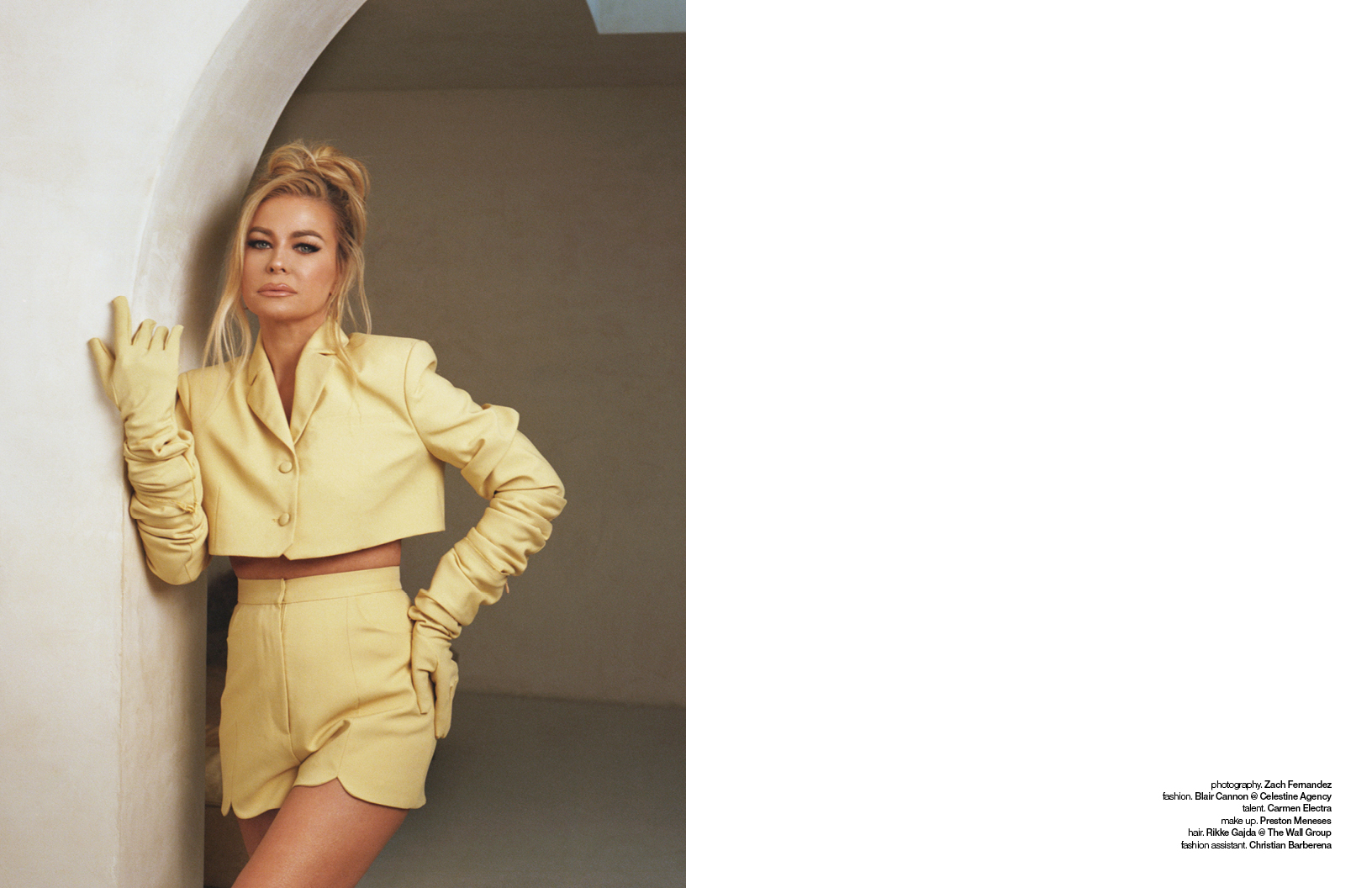 What did you think of The Game’s song that shouted you out?

Yeah! That was like, whoa. Crazy. It was insane. I thought it was cool! I remember the original [D’Angelo] song. But I had never met [The Game], so I thought, ‘okay, that’s cool’… It’s a great song, too. When I heard it, I was just like, ‘okay, The Game! I like that!’

You know, sometimes you wonder like, did something pop on TV at that moment? What was it in that moment that inspired that?

That has to be one of the weirdest things, seeing your cultural influence come up in unexpected places. Like, I was in line for a Techno party in Berlin and your face was on a poster.

Oh, I love Berlin! I would love to go back out there and see it again, maybe for a longer time. [The first time] wasn’t my choice. The time that I went, it wasn’t for vacation. I’ve gotten to see so many really amazing places throughout my career, and that’s been amazing. But you don’t always get to stay long; you always have to go to the next premiere or the next event that’s happening. I know what I’m going out there for, and so that’s just how it’s always been. I would love to go back, though.

Do you remember if there was a city or a place where you were immediately like, ‘oh, I want to come back here, I want to spend more time here’?

I loved Paris. I shot a campaign in Paris and was able to stay for about two weeks— I got to do some fun things and meet some new people. So that was beautiful.

And I love fashion, too. I’ve been to Fashion Weeks all over the world, and I was invited to Paris Fashion Week, but I couldn’t go because I was working on music at the time… Since then, I’ve gone to some LA shows — I always love to support up-and-coming designers as well as the iconic designers. You just melt when you see their shows: the fashion, the music — you get to experience everything as a new collection, and you’re practically drooling.

I’ve been really, really lucky to do what I do… You do learn certain things the hard way. Yes, there are times where I’ll say something, or something will come out wrong, but now it’s just like, ‘don’t tell me.’ You know what I mean? Tell me all the good stuff. Lately, everything’s been smooth — except for, obviously, going through the hard times the entire world has gone through with the virus. But you just sort of get into this flow. And now on social media… I get a lot of love. I think I have the best followers, and I’m really grateful for that. Really, truly grateful.