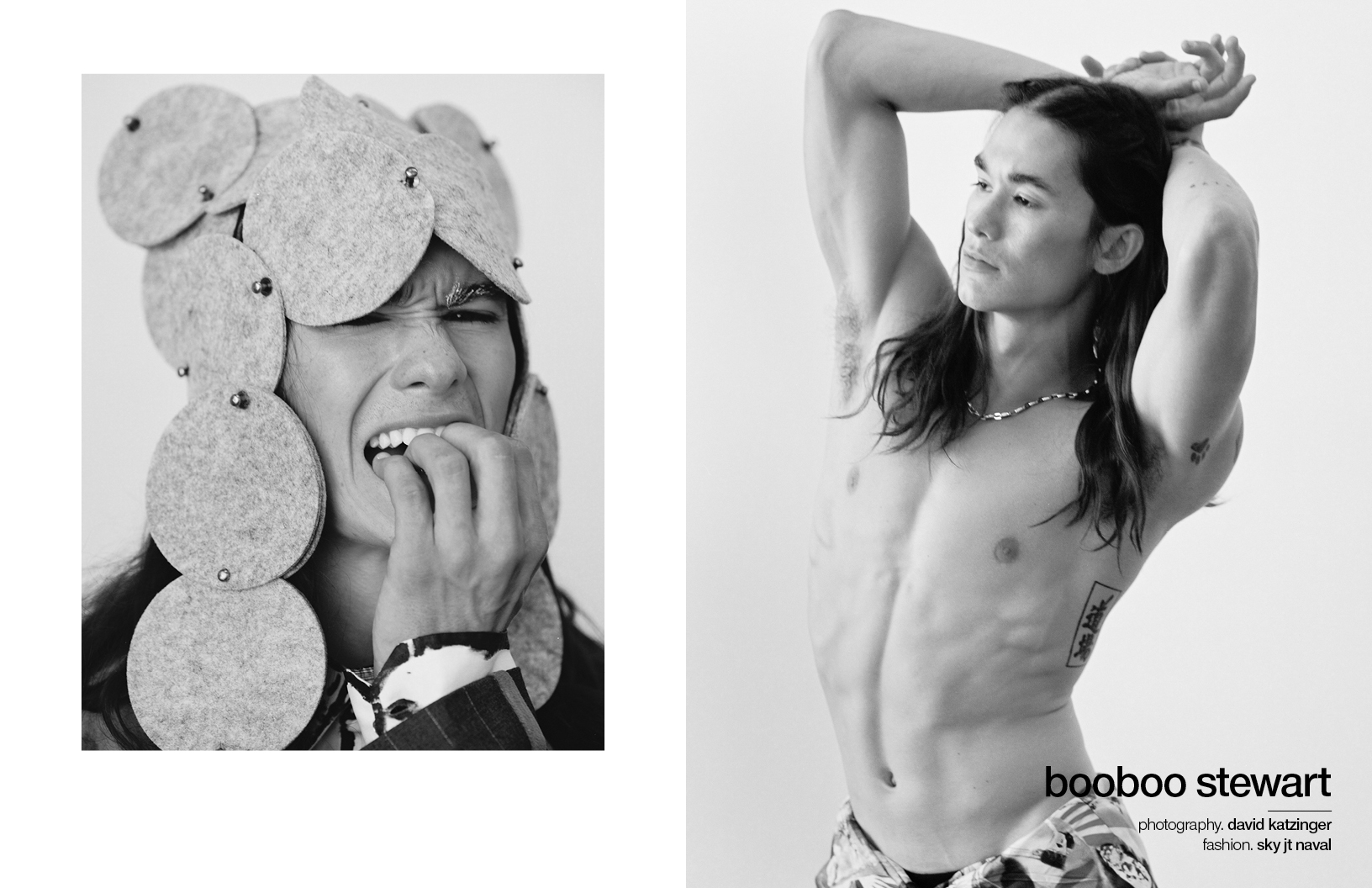 Bold colours, striking texts and fearless energy — these are some of the first impressions given by the pieces done by artist and full-time actor Booboo Stewart. A relatively new entrant to the art world, his distinguished artworks have quickly made him a name to watch in the field of contemporary art. With a courageous spirit and youthful ambience, his work questions notions of ‘perfection’, creating new paradigms and modes of perception with beautiful results.

When not painting in his studio and considering further ideas for his art, Stewart is also an accomplished actor with many films and television programmes already under his belt. Last year, Stewart played the role of Peter Dragswolf in Thomas Bezucha’s drama Let Him Go. He also recently finished shooting a horror film — Those Who Walk Away, directed by Robert Rippberger — and is currently awaiting the release of Paradise City, an Amazon Prime series based on his 2017 film American Satan.

His ability to use his varied experiences and turn them into artful creations is what makes Stewart’s work so unique and appealing. But art is not the only area where the actor excels; at the end of last month, Stewart released his first ever song to SoundCloud, entitled “Obsessing Alone”. Schön! talked to Stewart about all that and more in an exclusive interview. 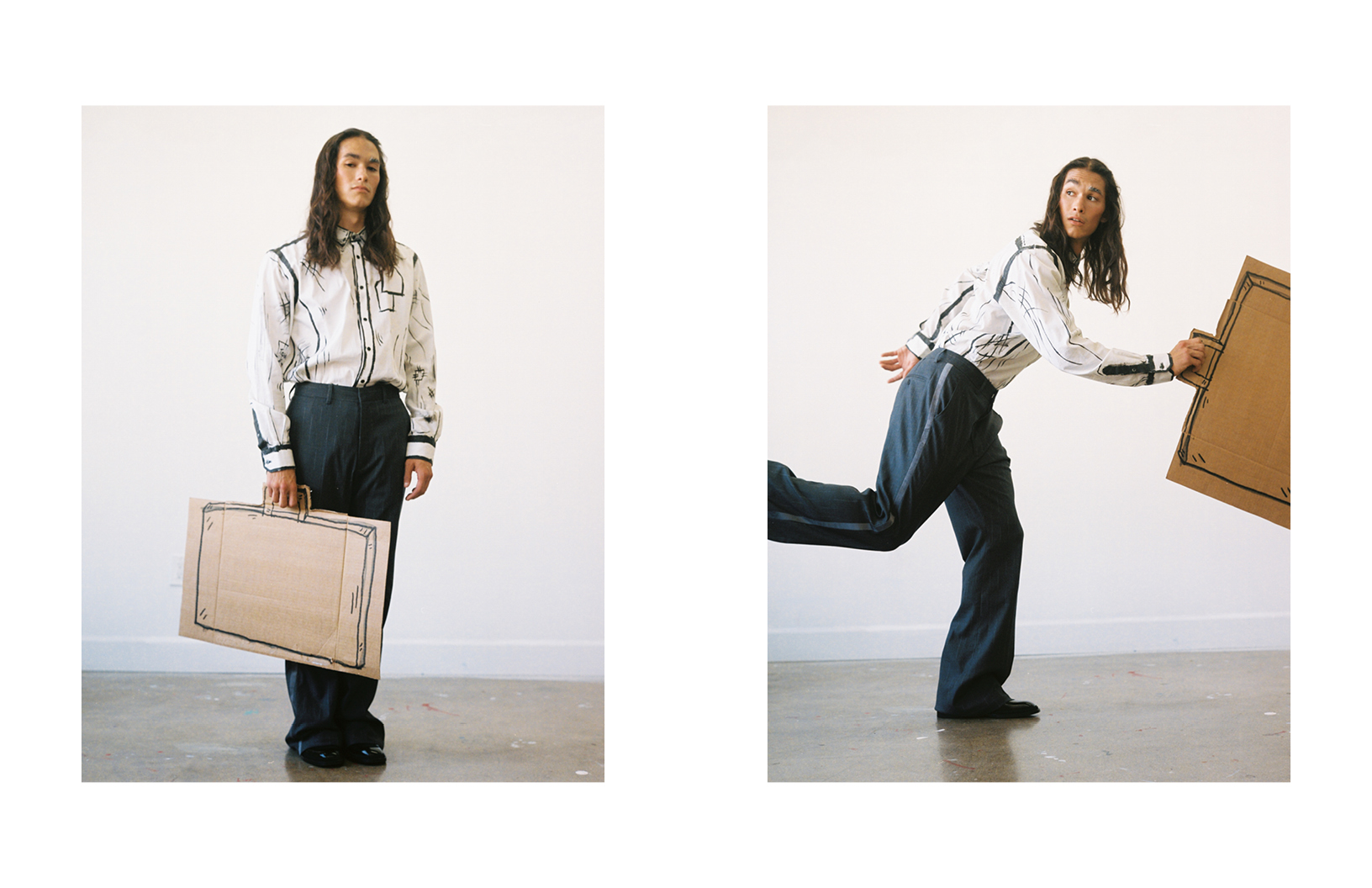 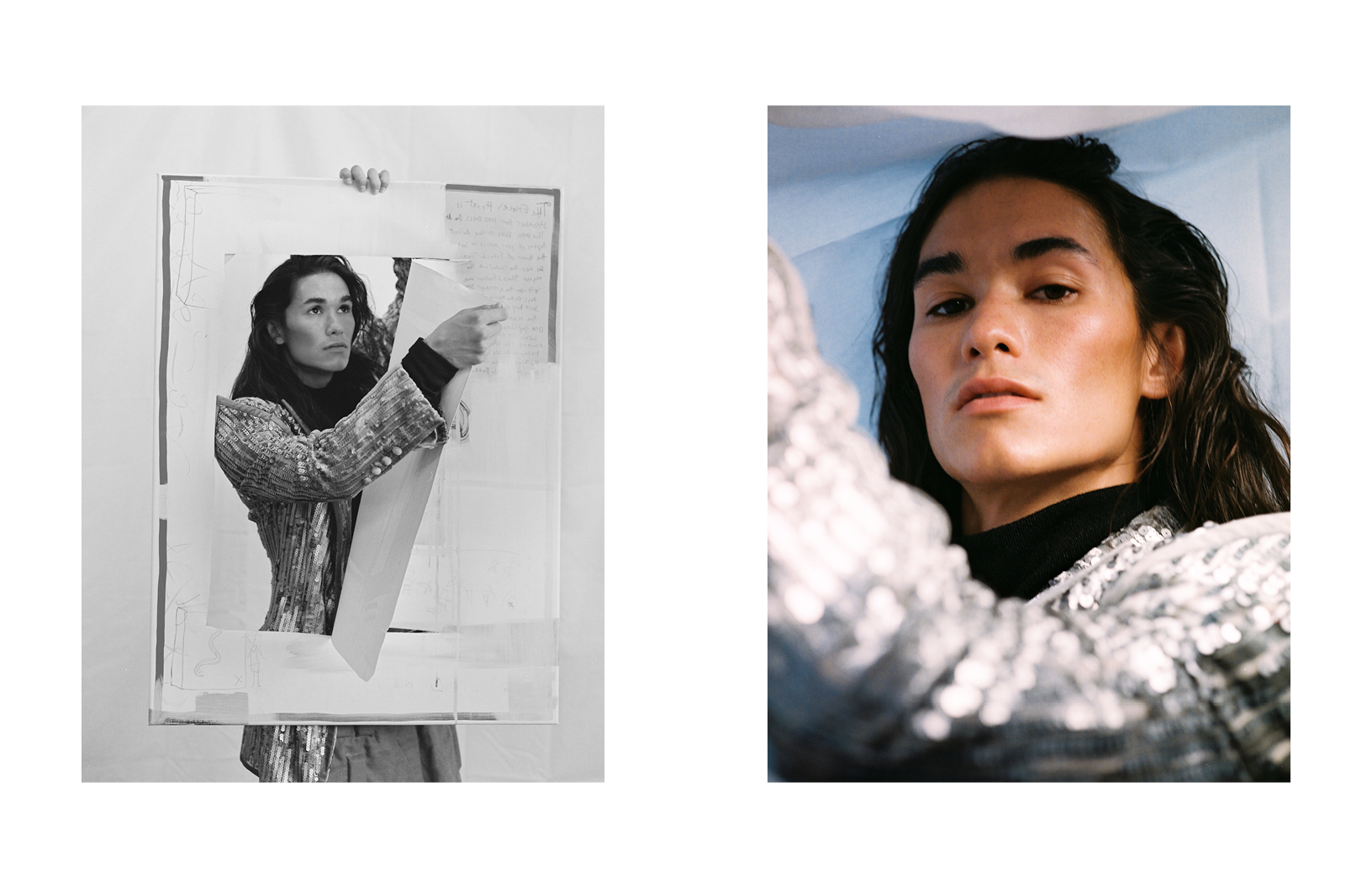 When did you start taking art seriously as a pursuit, and what provoked you to do so?

For me, it was a combination of needing an outlet for creativity that could be done without the help of others. When you make a movie, you need a crew of people; for painting you can pick up a brush and go. From that moment it grew, and as I became more confident in it, I began to take it seriously.

Yes, I have a painting called “Man Above”. At the time, my studio was at my family’s ranch, and I had been working only in black and white. My pen was running out of ink, so I started pressing harder on the canvas and scratching it around. I stepped back and was like, whoa. This is really interesting. That was definitely a defining moment in my art venture. I call that particular style “Chicken Scratch”.

What are your thoughts before starting an artwork? Do you plan, think about themes, etc.?

Every piece is different, really. I’ve developed different methods of starting a piece. Something that I often do is start with a title or a saying. I have a notes folder on my phone where throughout the day if a saying pops in my head I’ll write it down. 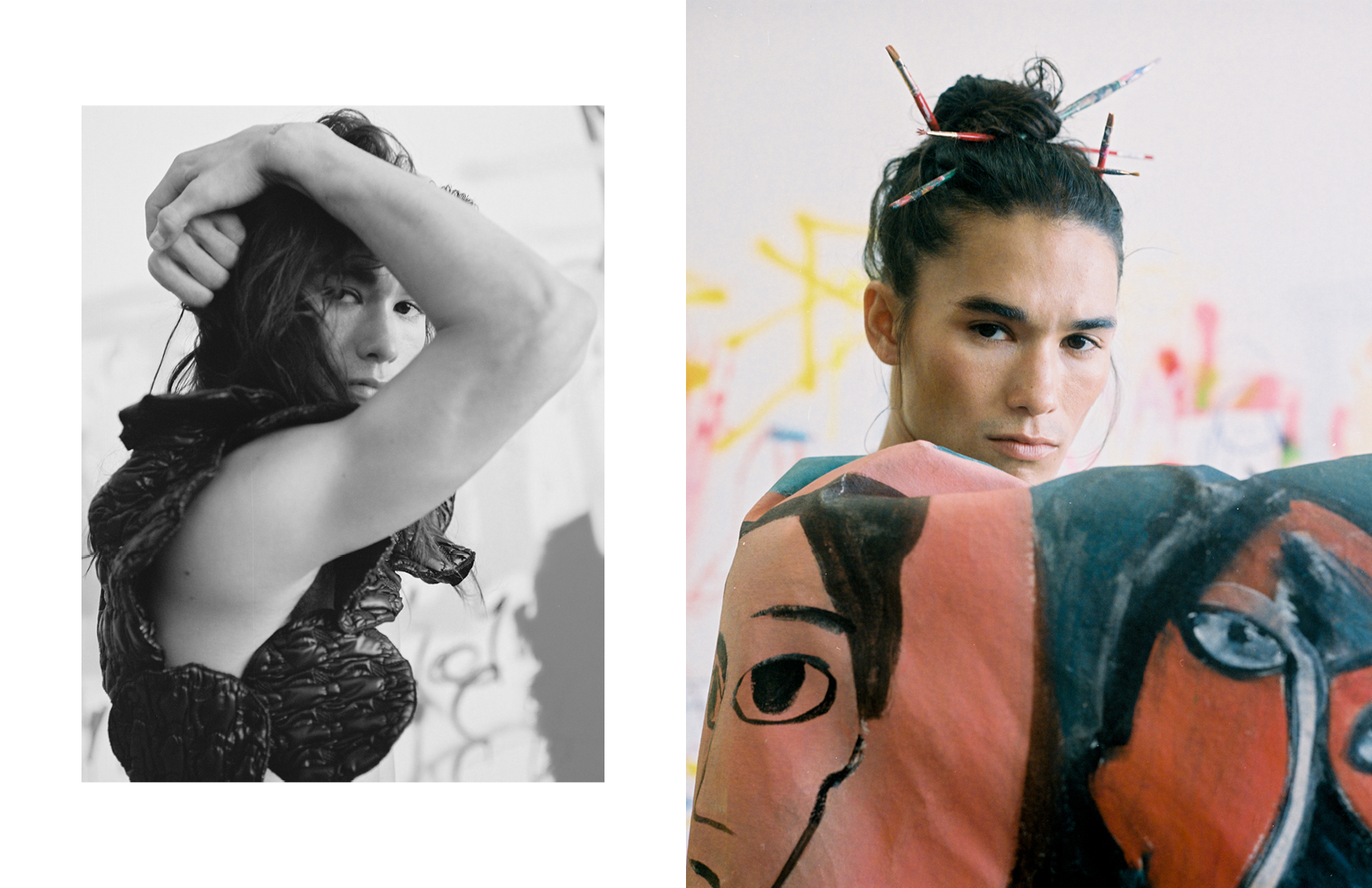 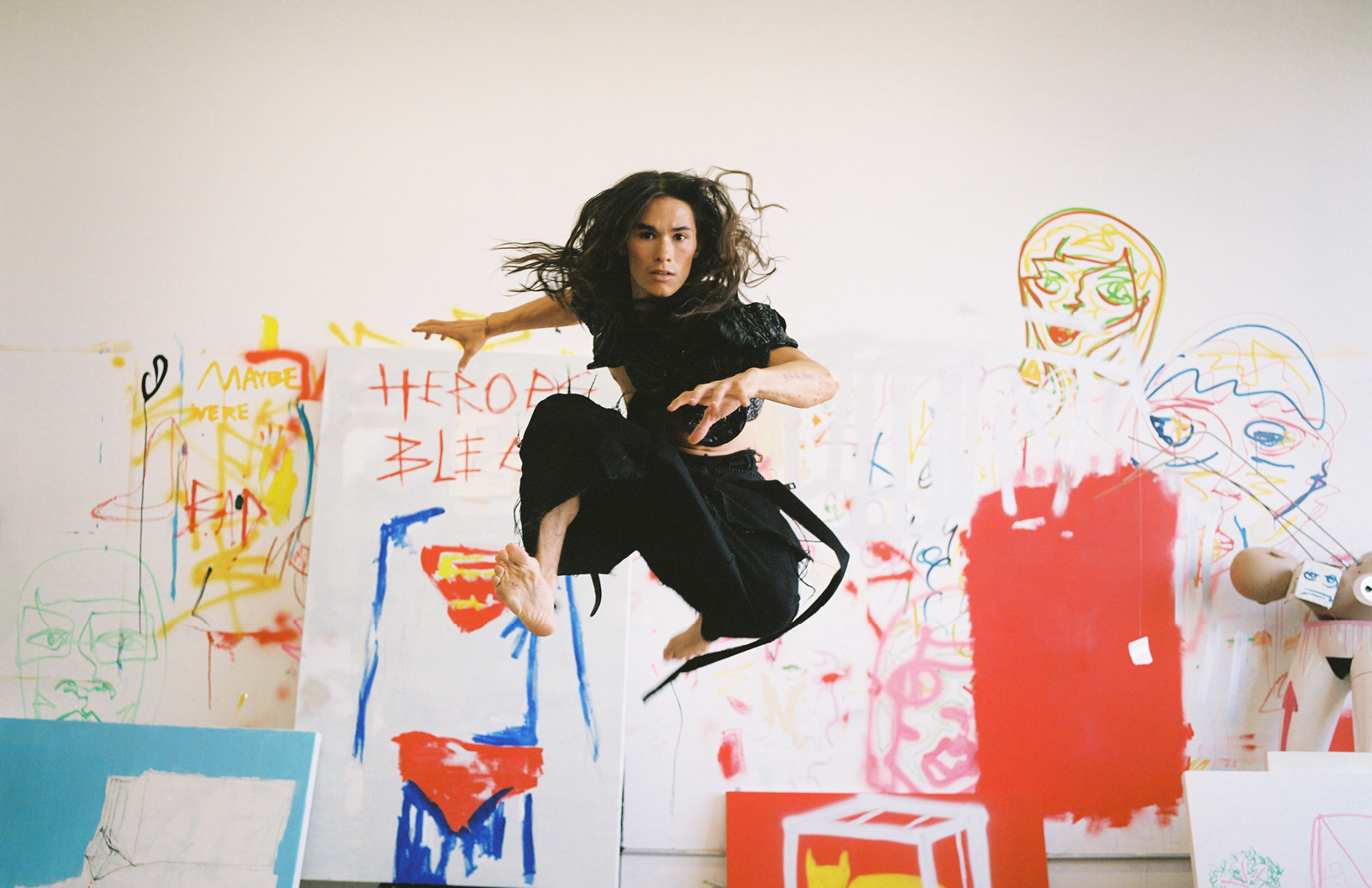 You started with a minimalistic, monochromatic style; now, your works are extremely vivid and complex. Can you describe this transformation for us? What changed within you?

I was always afraid of colour — even when I was younger and would doodle I never used colour. But I think the change happened when I started getting into street art. It’s so vibrant and colourful. Danny Minnick is one of my favourites; his work around LA definitely stands out to me.

You have an amazingly rich cultural background. How does your family and family history influence your artistic vision and philosophy toward art?

Well, growing up I was either on a film set with my dad or we would travel around and sell my mom’s art at festivals. So I grew up surrounded by people of all backgrounds. I love the world and all its colours.

Do you like to be alone while creating, or is companionship and emotional energy exchange important for you?

I think there’s definitely a benefit to both. For me, when no one’s looking, I definitely feel freer in trying new things and I’m less afraid of making mistakes, but I also like having input from other people. My studio now is a semi-shared space and I’ve learned a tremendous amount from the other artists here.

What pieces of art in your life have had the greatest impact on you?

I love Beef Ribs Longhorn by Basquiat, Skull of a Skeleton with Burning Cigarette by Van Gogh, The Open Window by Matisse and pretty much everything Ralph Steadman does. 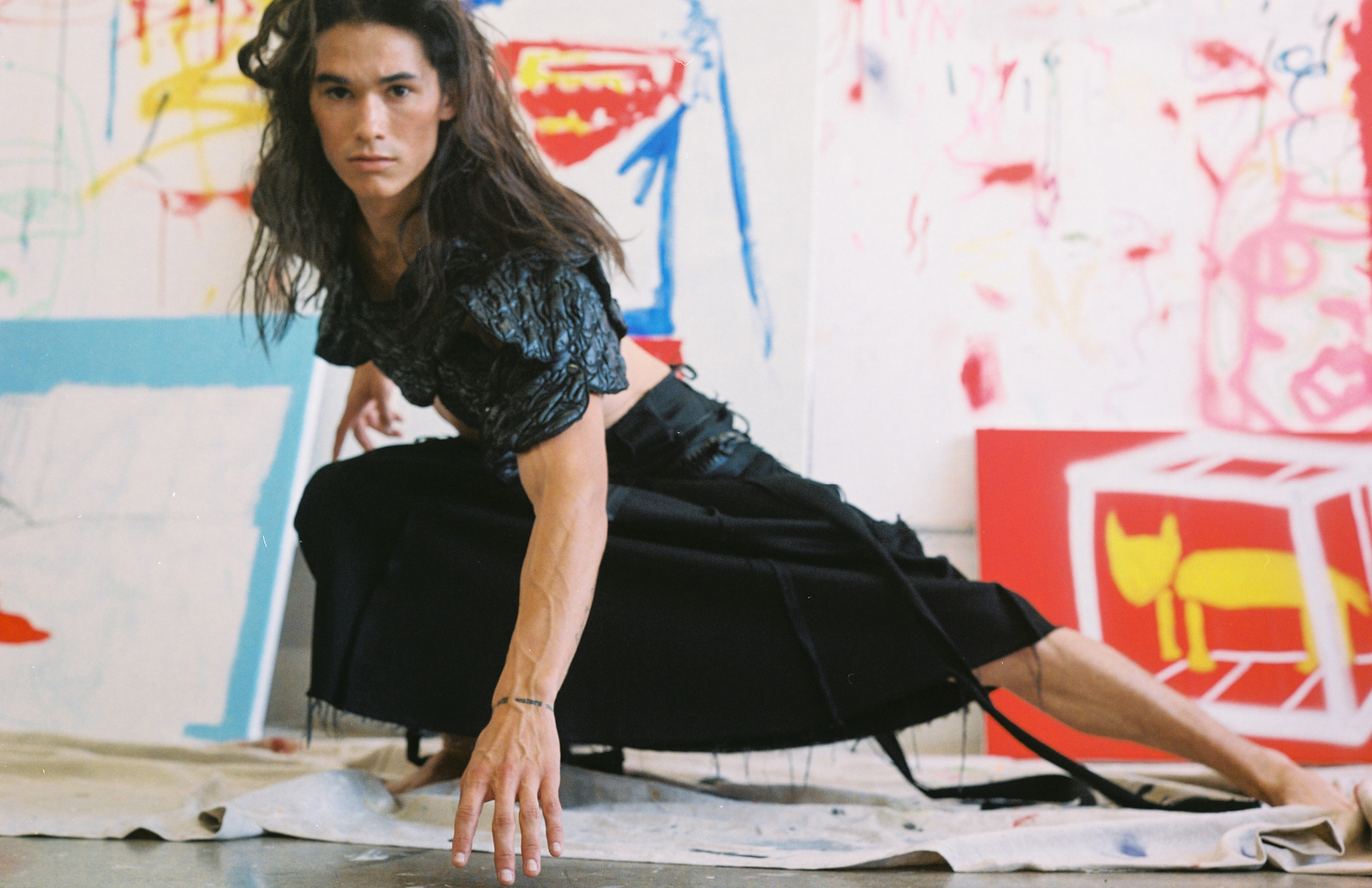 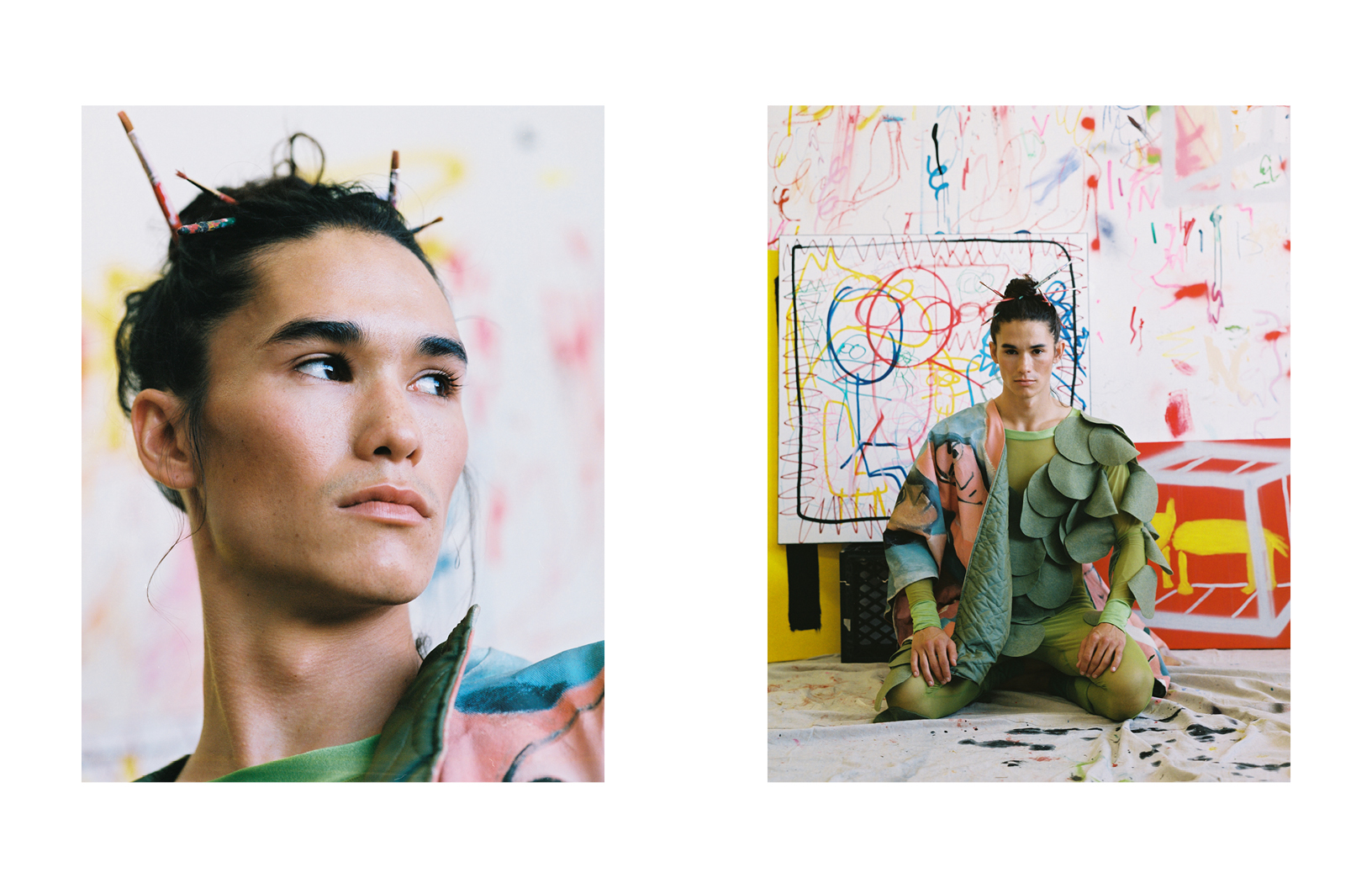 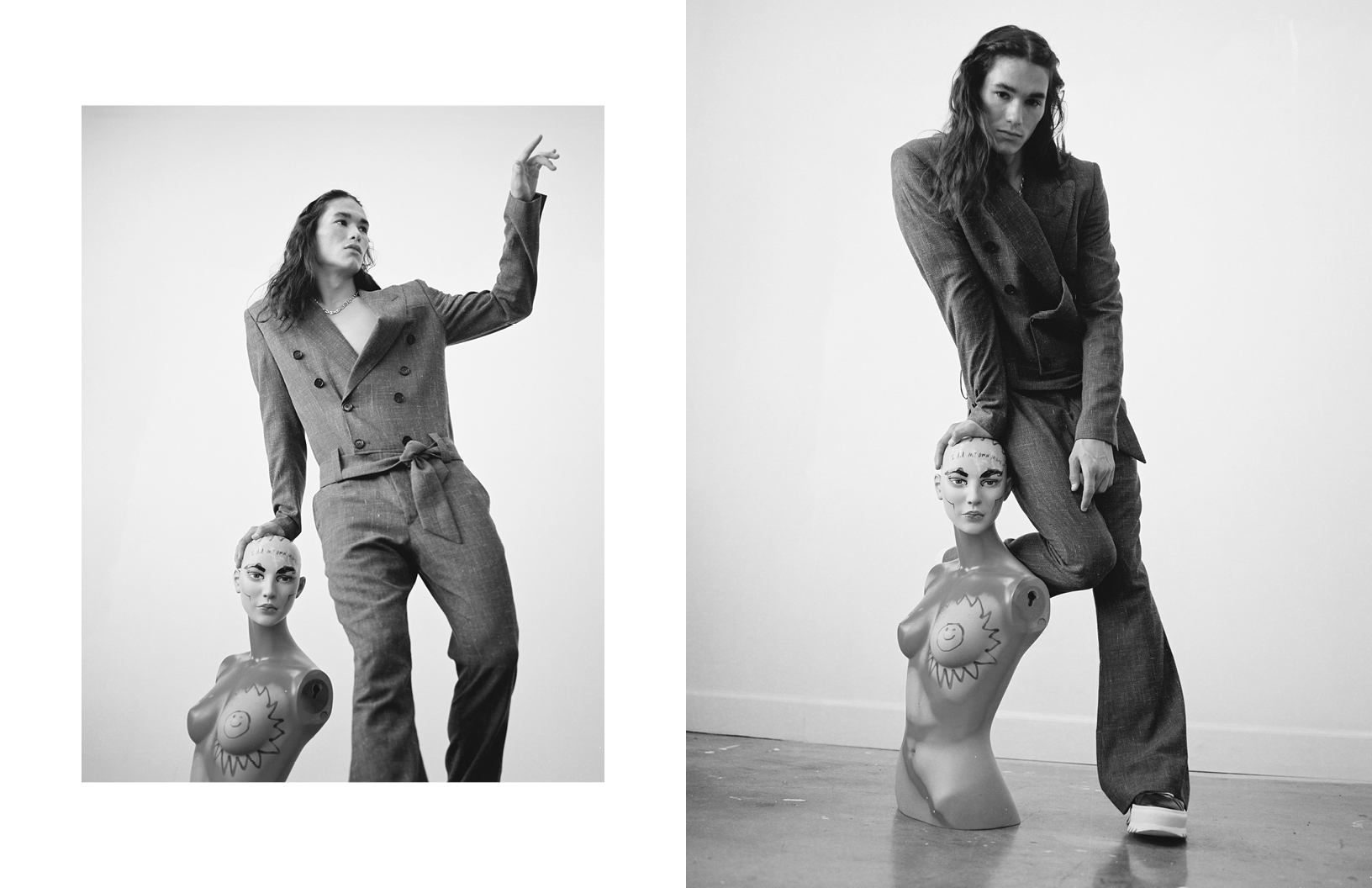 Talk a little about the symbology of your pieces. Do you consciously put messages into your pieces, or do they occur naturally?

I feel for the most part it happens naturally. Sometimes I’ll specifically place, but something I like to do is sit in a chair in front of my painting and just kind of wait until something sparks. I like that each person will have their own interpretation.

What is the overlap between your artistic career and your acting career? As in, do you see them connected in any way? Do you draw from similar places for inspiration in each, or are they totally different?

I think they definitely overlap. Even before I was taking art seriously, I remember that, for a character, I made a drawing of what I wanted his presence to be like. I think the fun thing about acting is that you can draw inspiration from anywhere. I actually just finished a movie called Those Who Walk Away and I used Francis Bacon paintings as part of my character study. 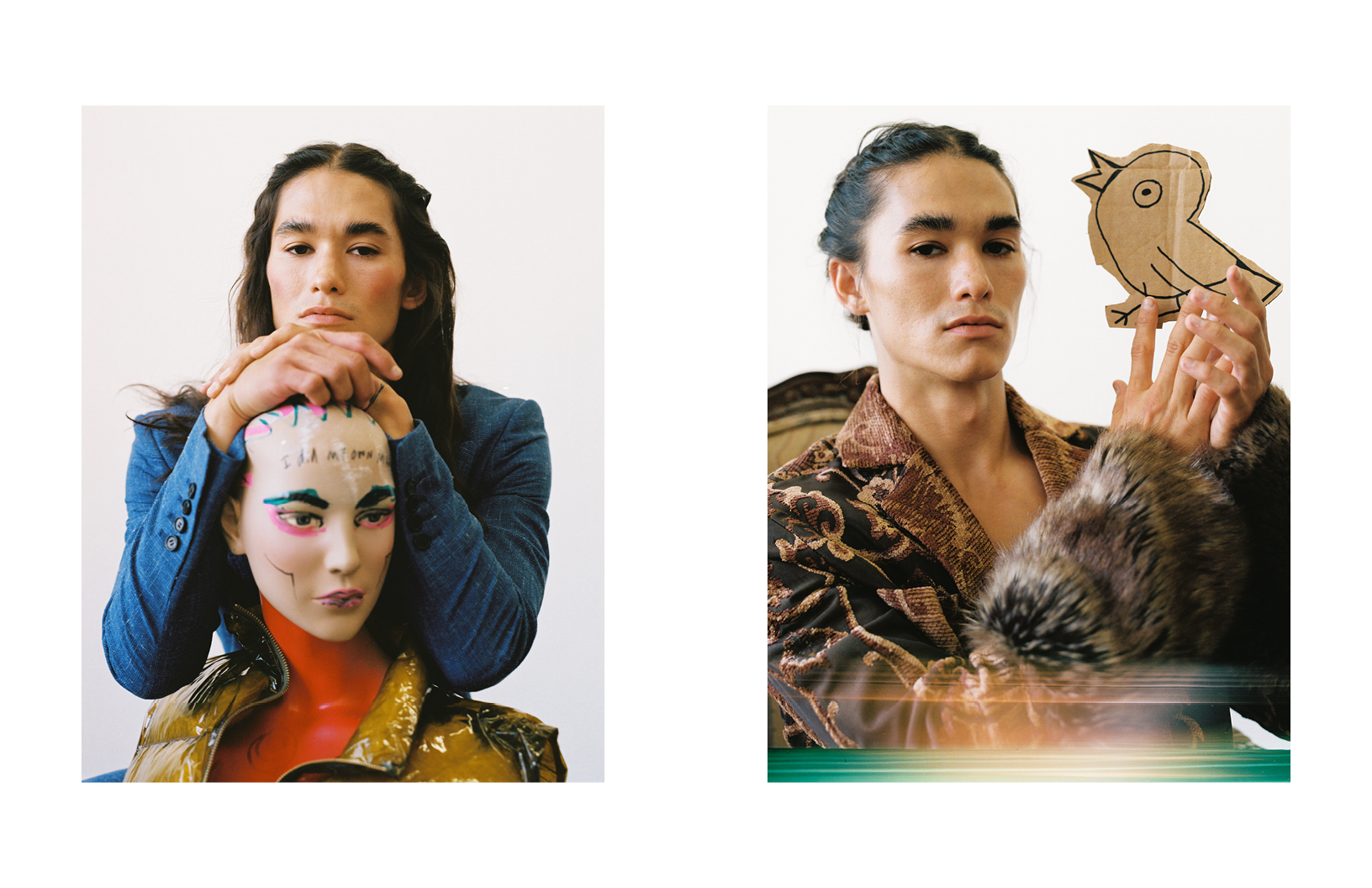 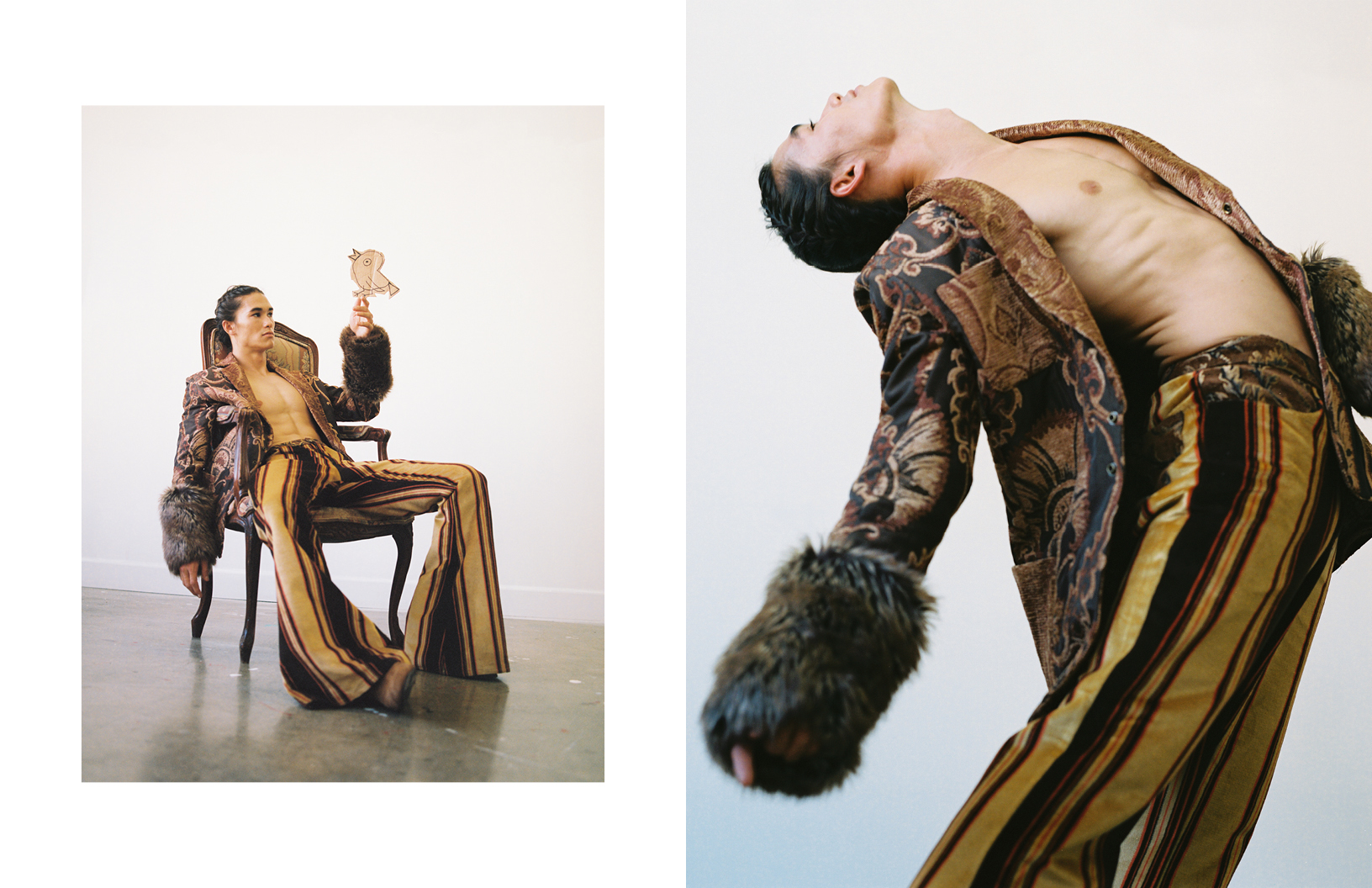 To continue talking about acting briefly, you’re going to be in the upcoming Paradise City. What can you tell us about your role in that?

Yes, I play Vic Lakota, one of the guitarists for the band The Relentless. Our story continues from our film American Satan, and this time around, we take everyone into the world of what bands actually deal with, all of the drama of the world of music.

You were also in Julie and the Phantoms, which has a pretty active fanbase online. As someone with a big following yourself, what’s your relationship with social media? Do you follow fanbases, try to keep distant, or what?

I used to fall into the “Instagram Hater” category. Art actually pulled me out of that. I wanted to show people what I was creating. Since then, it’s been a wonderful journey of inspiring people to express themselves in all forms. I try to use it as a tool, trying not to get stuck in the “scrolling” mentality. 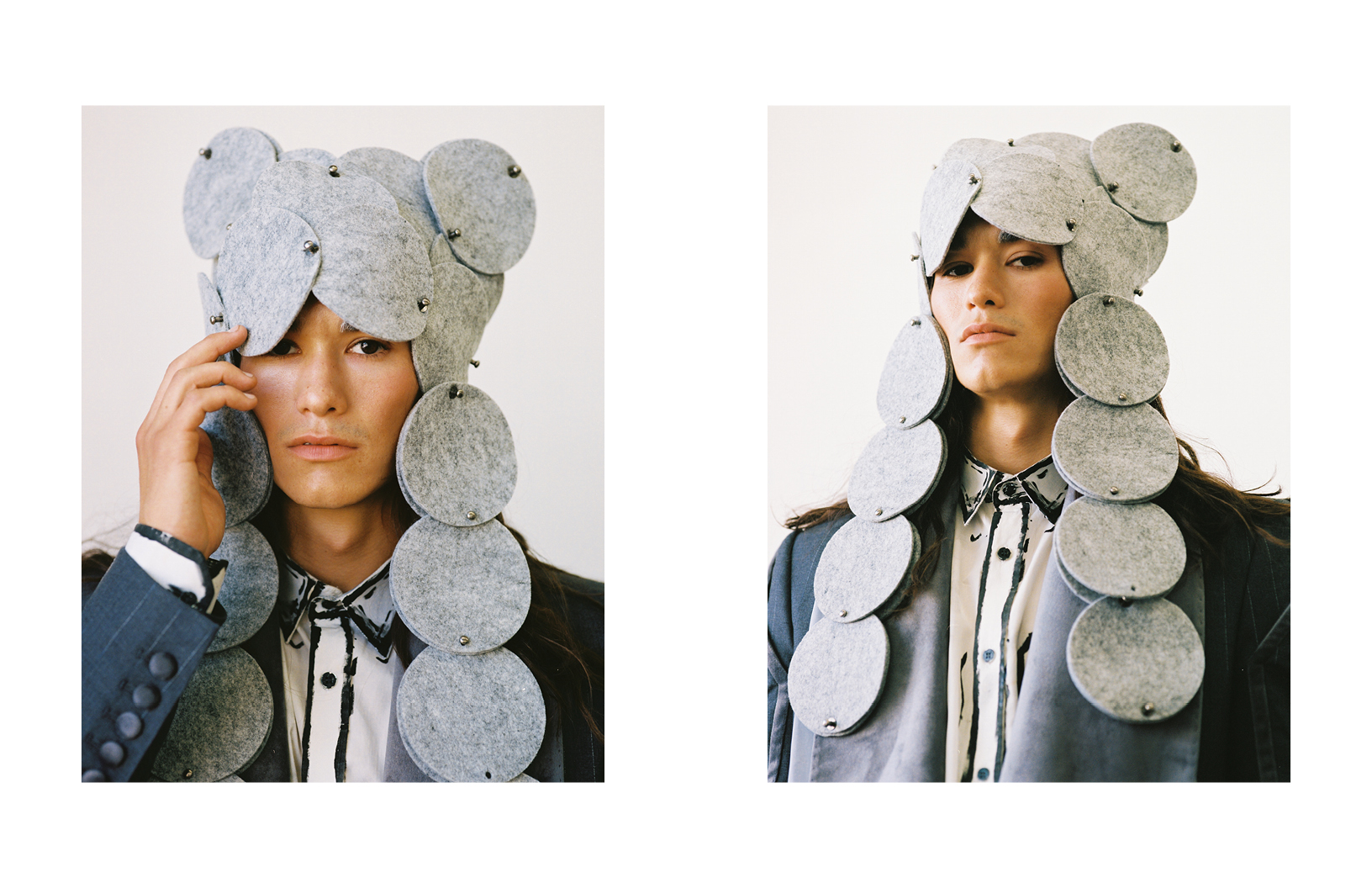 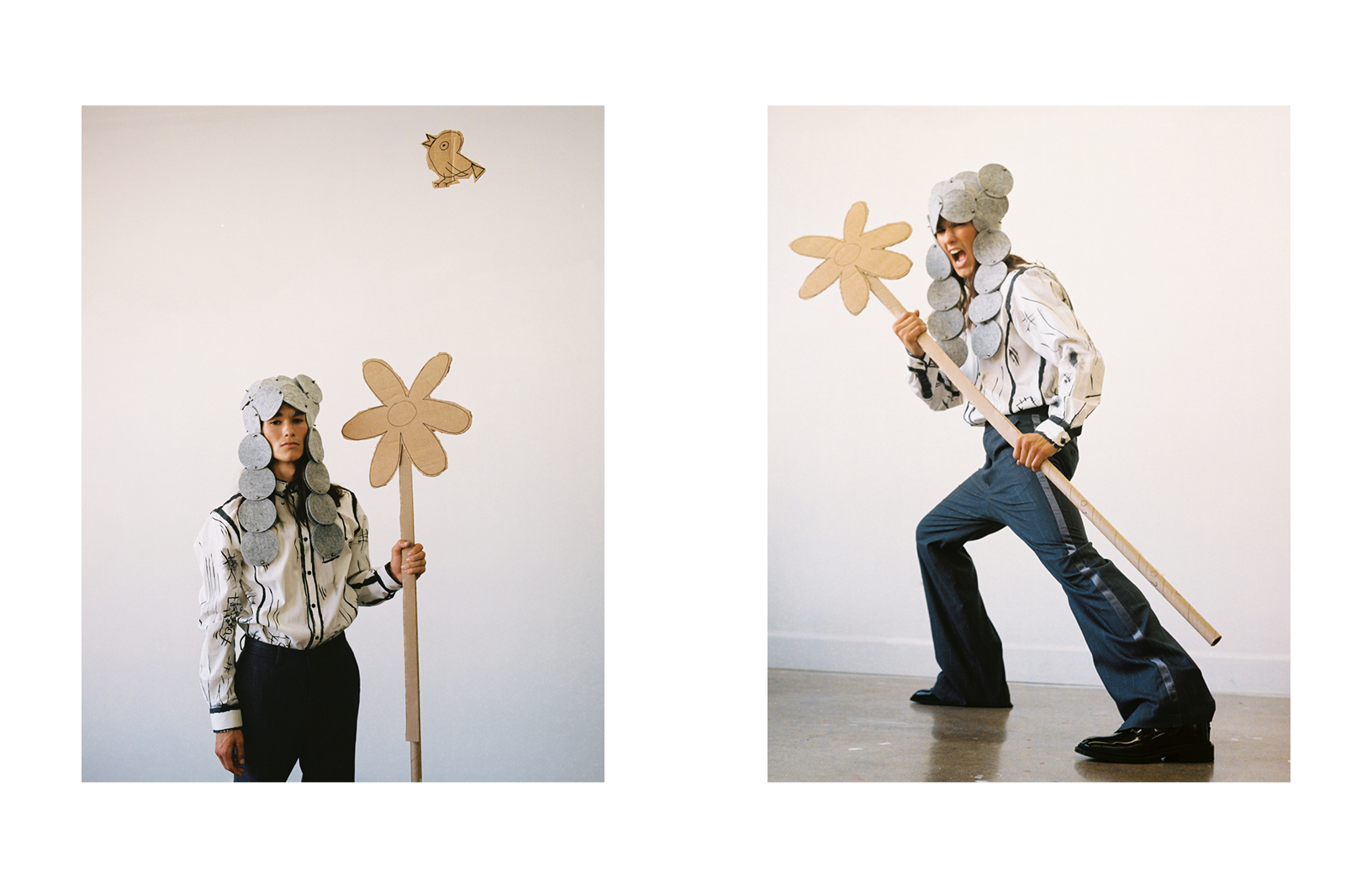 You recently released a song on SoundCloud. What’s the story behind its creation?

I just love creating. My girlfriend Valentina Cy, she’s a singer/producer, and she showed me how to make my own music last year. “Obsessing Alone” was my first finished song. I’ll definitely be releasing more.

What was the most memorable thing that happened to you in the past year?

I had a very intense couple weeks while we were filming Those Who Walk Away. It truly was a journey. That was a memorable time for me. Our film was shot in a series of very long continuous takes, so tons of blocking and preparation — all while my character throughout the story is losing it.

I really can’t wait to be filming again. I love diving into a character’s life and feeling the energy of a TV or movie set. 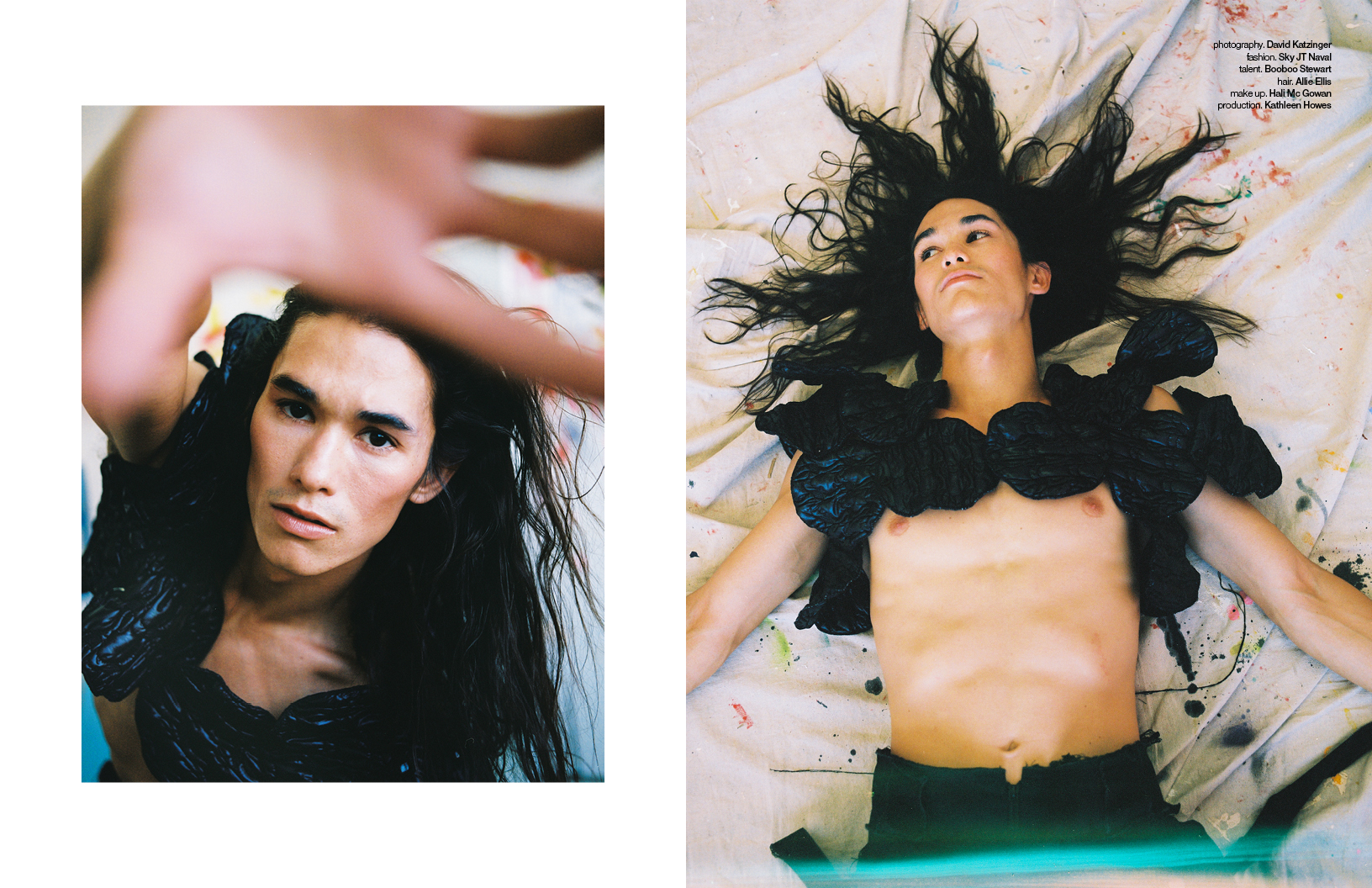