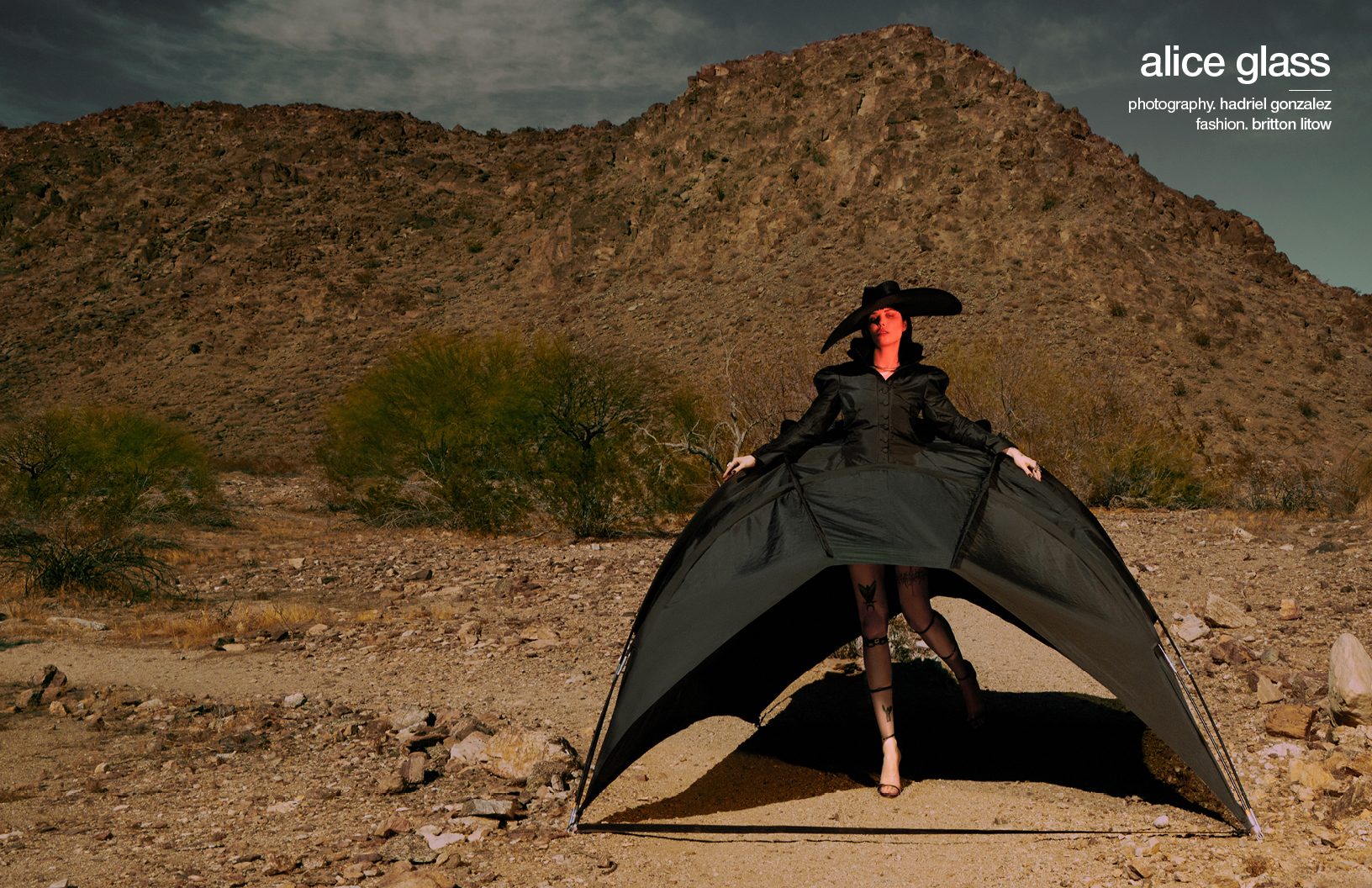 After a series of hardships and a trying year in quarantine, Alice Glass is happy to say that she is, finally, in a better place.

Specifically, she’s in the desert, the peculiar location where she’s opted to focus her efforts on a forthcoming album. The past year, while presenting unique challenges, has proved creatively fulfilling for Glass, allowing her the time, space and mental energy to create tracks she says are among the most personal and “fucking intense” of her career. “Some days are good, some days are bad,” she tells us — but she’s content that the music she’s making now represents a voice, and a message, all her own.

Schön! sat down with the artist for a lengthy conversation about her past, what her creative process looks like today, her unexpected entry into the hyperpop world and what we can expect from her next.

Naturally, we have to talk about the past year. How has your lockdown and pandemic life been? What’s been keeping you busy?

It’s been a weird year, but I guess my biggest focus has been on finishing my record. But also, moving to the desert, playing lots of acoustic guitar, cutting my bangs when I’m sad, talking to my therapist on the phone, making music with people who inspire me but live in different cities, thinking about what tattoos to get. Also stressing about global warming, mass shootings and all the closed venues, and also petting my pets.

I want to look back a bit at your history as a solo artist. You debuted with Stillbirth — can you tell us more about the creation of that song? What about that song made you know you wanted it to be your solo debut?

I wish I was emotionally stable enough at the time to have planned a rollout and to be able to say I chose a single from a bunch of songs. That was just the song that I needed to create and that I was able to finish first. I knew I wanted to embody the rage I was feeling. I needed to express what I was going through, which was a lot at that time for me — really processing and coming to terms with the trauma I’d been through. All the while I was being threatened legally, and I was afraid for my safety in my own house. We heard someone tried to hire this guy to break Jupiter [Keyes]’s legs. There was a break-in at the house next door that I think might have been intended for us. But all the fear turned into rage. It always does with me. It always has. I don’t know what I would have done if I couldn’t at least express myself through music. It helps me cope and survive, I guess. 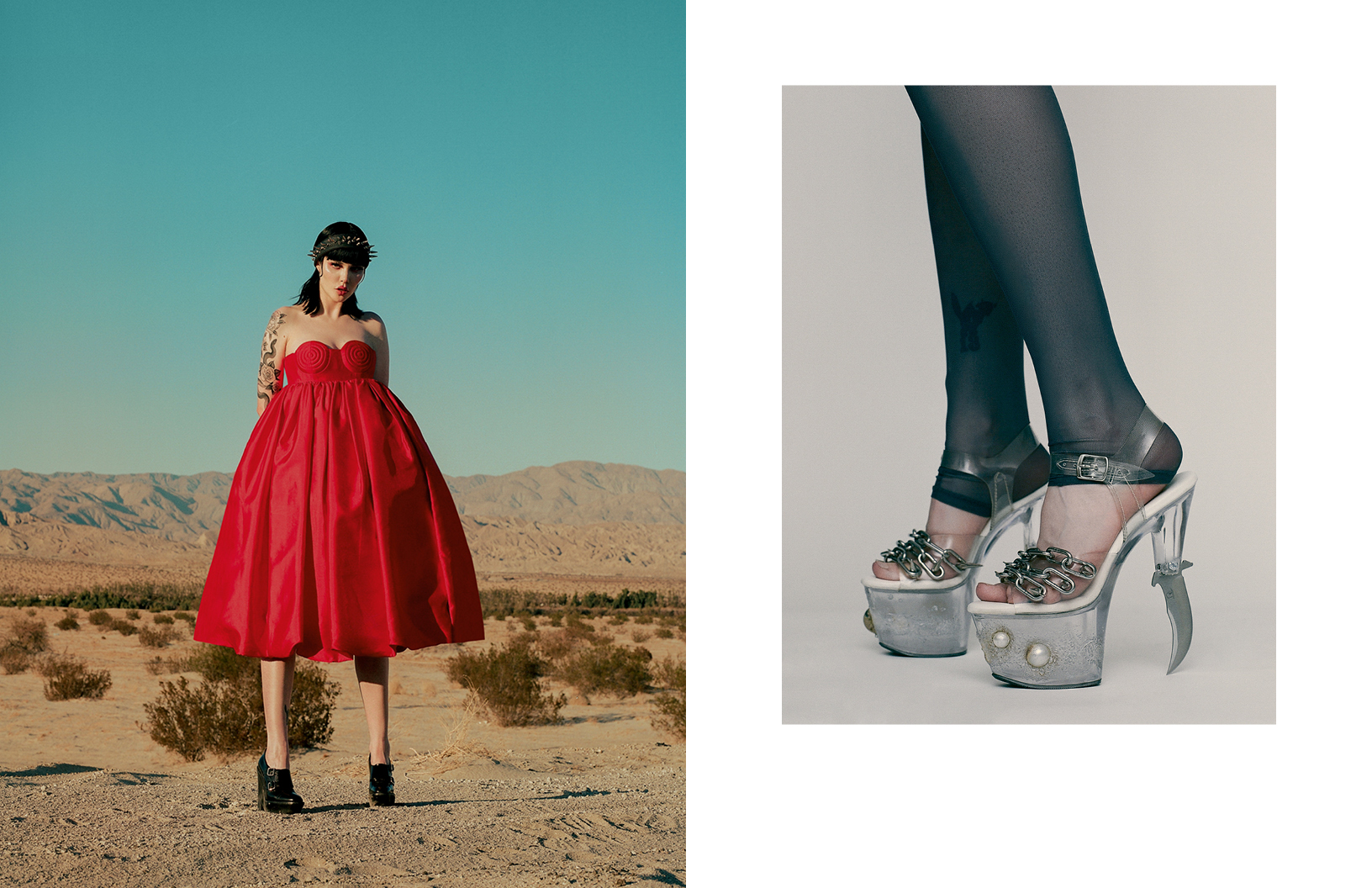 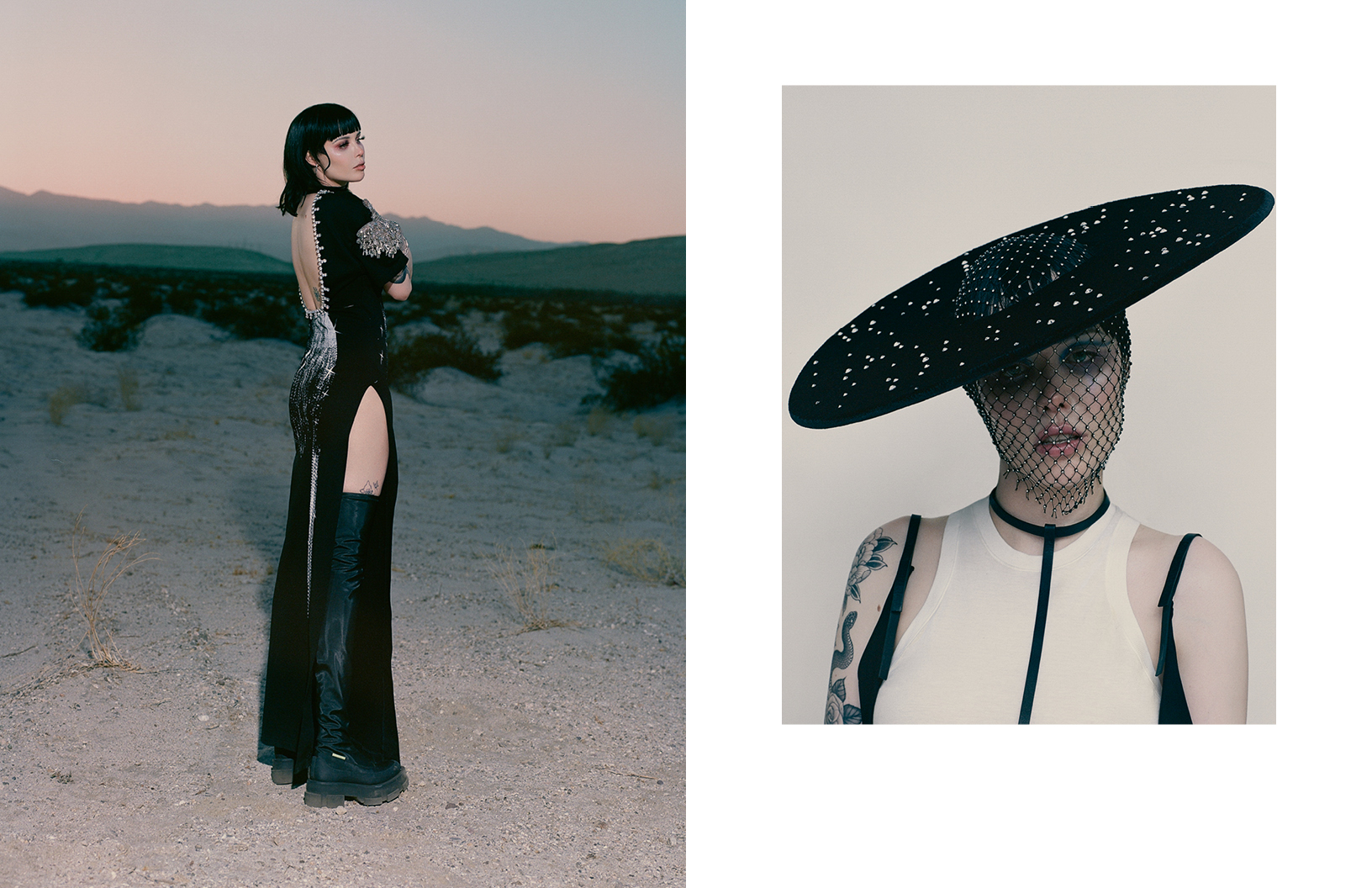 In 2017, you posted your full statement regarding Crystal Castles. First, sincerely, thank you for sharing that with the world. Second, I know sharing something like that can also be a traumatic process, with media questions about it reigniting that pain all over again. Can you tell us about your emotions in the days and weeks following that post and seeing how people responded?

It was weird, because the day I posted it I was on my way to a show in San Diego, so I was kind of just trying to have a ‘normal’ show day, but I had also just opened up about what I had been through for the past ten years. It had been weighing so heavily on me up until that point, and I felt this tremendous relief as we drove down the coast. I had already been threatened with lawsuits for tweets speaking about domestic abuse, even tweets that didn’t reference anyone or anything specific in my life. Like, I was just giving informational, real world statistics — talk about consciousness of guilt, harassing me for that. And having already been intimidated legally, I was also mentally preparing myself for that.

Right before I went on stage that night, I got my first message from another woman who told me she had also been groomed at 14. She later talked about what happened to her in a piece the Daily Beast did. Her story was very, very familiar, and I felt everything again. I was deeply shaken. Honestly, I don’t think I put on the best performance that night because I was so distracted by how disturbing everything was that she told me. She was just the first of many to come forward. So, despite all the difficulty and pain and threats caused by coming out with the truth, and even becoming a bit of a pariah in the industry as a result — spoiler alert: the music industry protects predators — it was what had to be done, not just for my own sake, but for that of other girls put in a similar position who were struggling to process it and heal.

In the time since, you’ve put out some incredible music paired with some really striking and memorable visual pieces. Did you have a planned visual aesthetic in mind when you debuted as a solo artist? What did or do you want to convey with your imagery?

Thank you. I think we’ll call it ‘Post-Trauma Wave’ or maybe ‘Damaged Core’ — it’s the feeling after years of being passive, frozen and imagining the worst thing possible at all times. I was looking for control of my life, and doll imagery, mannequins, porcelains in a landfill, all of that felt like how I felt. You make yourself constantly prepared, because you’re so familiar with despair there’s nothing anyone could say or do that you haven’t thought of yourself. If someone wants my blood, I’ll drain it myself and use it at my will so there’s none left for you.

And it ends up not being as terrifying as you thought it would be. If you need to be in pain, make sure it’s your own. Don’t let anyone else have control over your sadness; let it be yours and uniquely yours, and that makes everything a little less scary. I guess that’s an abstract rant about how my visuals come about.

Well, in that same vein, the video for Suffer and Swallow came out earlier this year. Can you tell us more about the creation of that video, from inspiration to execution?

I have always wanted to do a live action video with dolls, and so has my friend, the artist Lucas David. We both share a passion for dolls. We both collect and befriend them. We had been talking about making a video featuring dolls for years now, and he got this great team in Mexico City to help put it together. Another artist, Astra Zero, also helped with the video, and it’s all stop [motion] animation that they did with these dolls Lucas created. I love the visuals he made for that video so much. 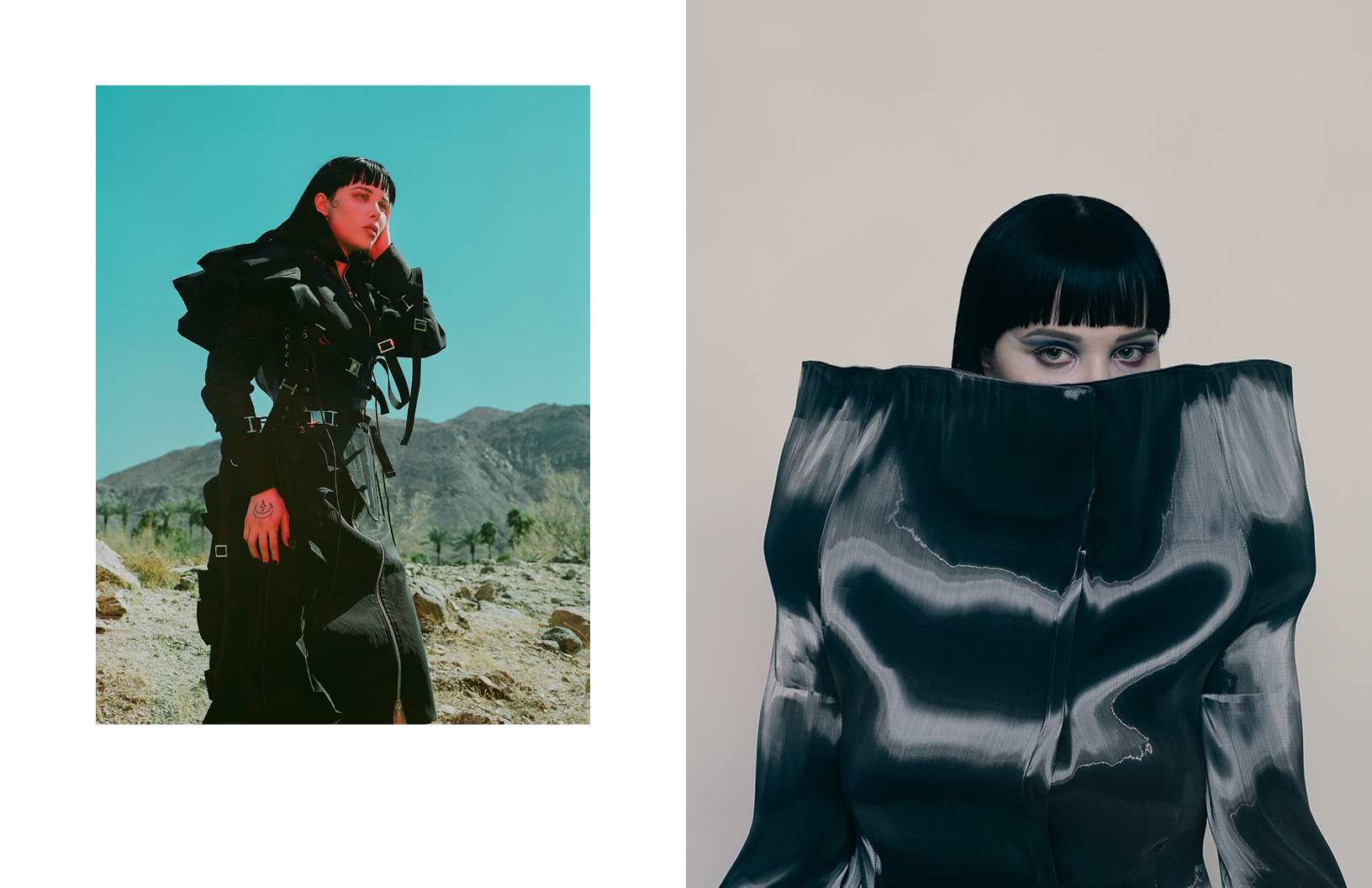 Let’s talk more about your creative process for music. What does the 2021 Alice Glass production process look like?

I’ll write when I’m emotional or when I feel like I can harvest my energy. But I have a hard time writing music that isn’t tapped into bleakness. I do find it really hard to work while in a depressive state sometimes. There’s a Sarah Andersen comic that explains this perfectly. I think there’s a misconception because so many great records have allegedly come from depression, but creation is almost always during the manic phase after a deep depression. Some days are good, some days are bad. When you hear my voice on the record, it’s been recorded in between periods where I had a really hard time even getting out of bed. I write about misery, but I want whoever listens to feel happy. I hope there’s a catharsis in there, not hopelessness.

Earlier you mentioned Jupiter Keyes. You’ve now worked on numerous tracks together. How did you first meet and start producing?

Jupiter and I met on tour, but we didn’t really talk much beyond passing each other and saying hello at soundcheck. In retrospect, I didn’t really get to bond with anyone much on tour given that situation I was in. So, I didn’t know Jupiter very well at the time. He was quiet, and I had no idea he was so talented because I didn’t ask what he did and he didn’t talk about it. Until he did a remix I loved, and [I] heard the sadness in him, in his music. Eventually Jupiter and I started writing music together and it just clicked.

What can you share about the songs you’re working on right now?

It’s some of the most personal music I’ve ever written. Some of the tracks are actually really hard for me to listen to my own voice on because of what I’m saying. I’m still healing. I’m not healed yet. I’m still exploring my past. Sometimes I’m not sure if it’s good or bad to go through that process, laying all the blood and flesh out for everyone to see. I can’t stop myself. So this record is really fucking intense.

I really enjoyed your hyperpop set during the HEAV3N SOPHIE tribute show. On the surface, it would seem like your music wouldn’t fit in with the bubblegum bass artists making music today, but in practise, there’s a lot of crossover appeal — as evidenced by your new track with Alice Longyu Gao. Is that weird for you at all, to be grouped in with artists whose sound you don’t really share? How has it been being welcomed into the hyperpop community?

I don’t find anything weird anymore! But I do know what you mean. I’ve found a sense of community in the LA rave scene. I moved to Los Angeles seven years ago after living on tour for years non-stop, and I met my friend Lulo who just started doing HEAV3N at the time, which is her world come to life — the bubblegum and pastel decorations and future-pop and angels with remixes of t.A.T.u. and Vengaboys. I think some of my songs could be on a compilation with them and I’d be happy.

I really really miss all the beautiful people going the extra mile to look amazing and the most amount of talent per square foot in any warehouse in LA. And most of us have the emotional damage thing in common, so it’s always really inspiring and comforting being around those people. There’s a hope there that really is transformative.

What are you listening to these days?

Finally, what’s been inspiring you recently?

What’s inspired me recently? All the protesters who put their lives at risk to stand up against tyrannical police violence, to make the people in power change policies so that what should be such a basic human concept, that Black Lives Matter, becomes a reality in practise. Death to white supremacy and death to the patriarchy. 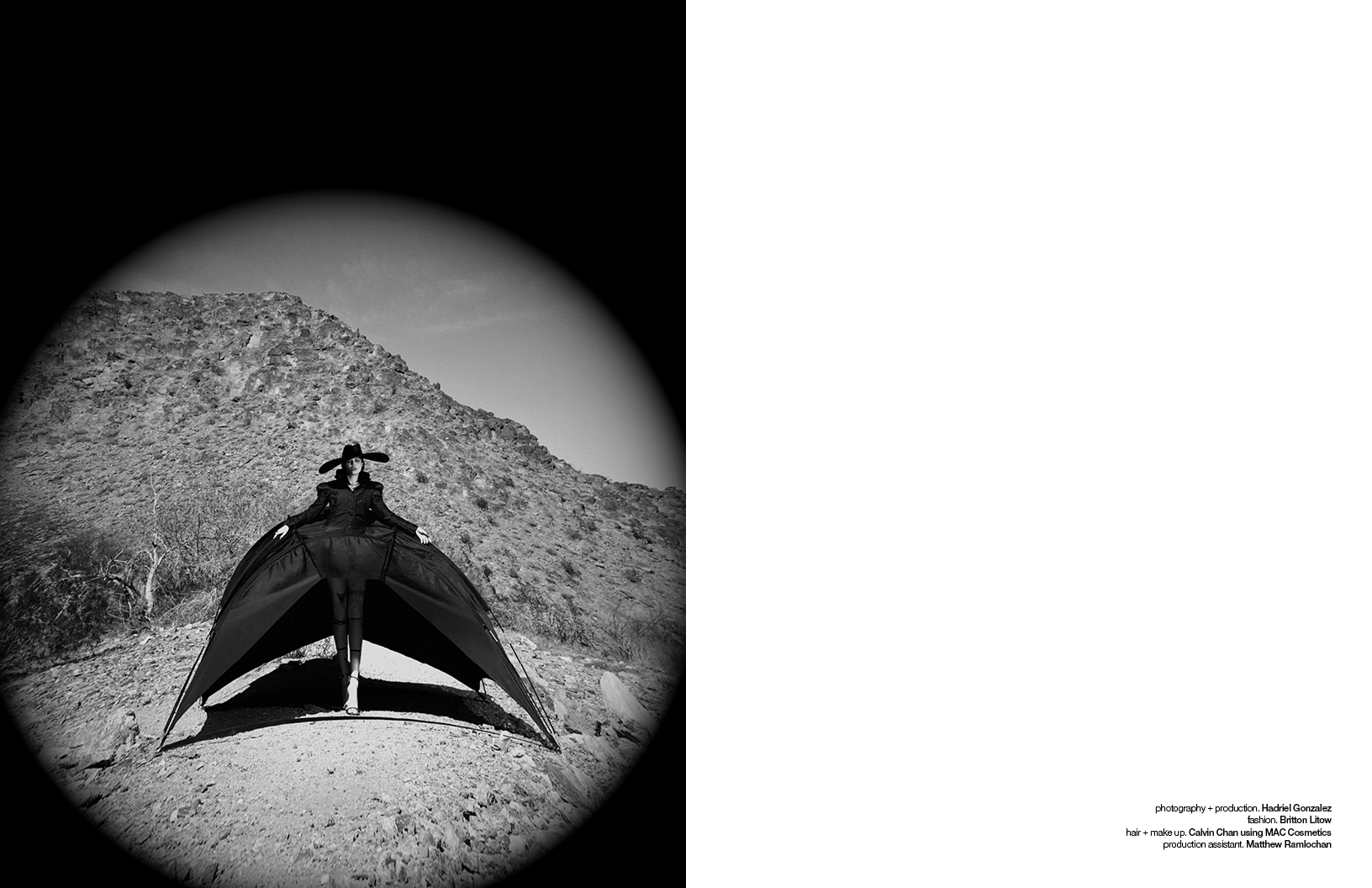