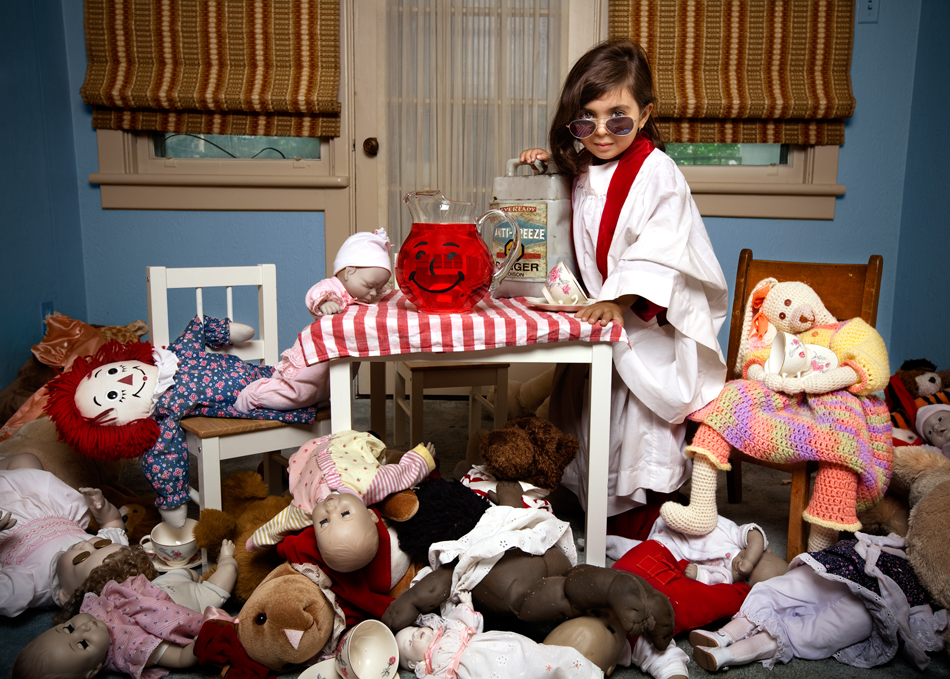 Jonathan Hobin is a talented photographer, but his vision has encountered a certain amount of resistance. Awash in Canadian sunlight, two of his own images hanging on a stark white wall behind him, and drawing ever-closer to his soon-to-open exhibition at the Gladstone Hotel in Toronto, he tells Schon!: “I’ve had a couple of critics say, ‘Oh, I think what you’ve done is horrible and you would have been able to accomplish the same thing by using teenagers.’ To use teenagers? Why would you suggest that other than the fact that it makes you uncomfortable?”

Uncomfortable is a fair enough way to feel when you see Hobin’s work, particularly his latest series. In the Playroom depicts children at sinister play recreating recent history’s most traumatizing events. His September 11th tableau got a lot of press, but there are more powerful images in the series; more delicately handled, carefully considered and constructed with a painstaking attention to detail and careful eye for beauty. A fair number are stunning in more ways than one. “It’s complicated enough for me,” Hobin says of the events his chooses to depict, from the Jonestown Massacre to Abu Grabe (the photograph, cleverly titled “A Boo Grave”, is an image of children dressing up for Halloween as torturers and the tortured). “So how would someone who has less context and experience comprehend something as massive as mass death?”

Hobin’s work is more tableau than photograph. His images are dominated by complex and beautiful backgrounds, sets that clearly required as much—if not more—creative energy than the photos themselves. It was this talent for establishing a setting that led him to a career in art direction and set design for films before he found his way back into the photography world. Hobin says of his time at university, where he studied photography: “I was making images, not photographs, and the photo became just a tool to document the set that I had created.” The disciplines are linked, and you can see the range of Hobin’s experience in the photographs that comprise In the Playroom. “They definitely have fed off each other,” he says of his two disciplines. “I’ve brought what I learned from my own experience doing set design for boring made-for-TV movies and transitioning the heavily orchestrated things to be able to do that on a much smaller scale, when it’s just me and maybe one other person creating stills.” 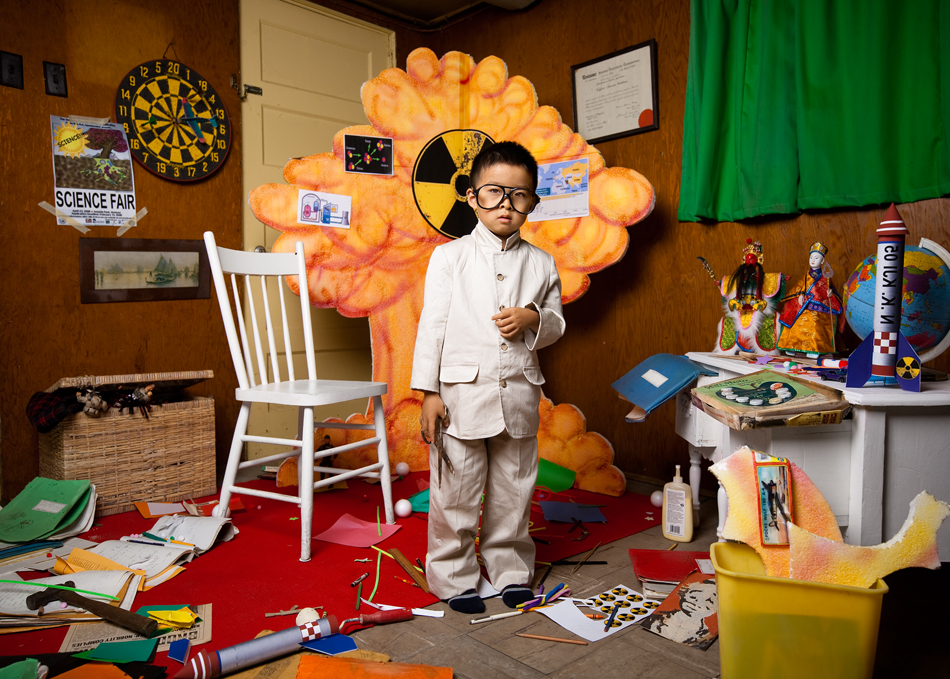 Hobin’s inspiration for In the Playroom, and for much of his broader work, is the encroaching darkness of the adult world onto childhood and our willingness, as adults, to ignore the way the most gruesome elements of our world filter down. Hobin explains: “I think there are a lot of people who reflect back on childhood with rose-coloured glasses [but] everyone’s had a sort of traumatic childhood event. I didn’t want to lose sight of the fact that it can be an incredibly complicated and pivotal moment in people’s lives.”

Hobin’s photographs are shocking to some, and fascinating to others, because they so clearly demonstrate what we already know to be true: children play at being adults until they are adults, and that play often includes a thorough exploration of the darkest parts of grown-up life. “We seem to gloss over this idea that kids pretend to murder each other all the time,” he says, “but as soon as you put it into context for adults— as to where [children] might have possibly learned about killing— people become uncomfortable. I think that using children as models is crucial to the impact of what I’m trying to say.”

But it isn’t all doom and gloom. “Sometimes the imagery can be really serious and sometimes, like childhood, it’s more complicated. It can start with a little bit of whimsy and dark humor and a little bit of a chuckle.”

In the Playroom will be exhibited at the Gladstone Hotel, Toronto, from Thursday, May 2nd to Friday, May 31st. The series is available for purchase through the Patrick Mikhail Gallery.