The week kicked off with Iris Van Herpen‘s study of glitches in the digital system. Titled Between the Lines, Van Herpen’s collection was a manipulation of organic forms and patterns. We could say carefully crafted skeletons were placed on fluttering butterfly silhouettes. Scale-like embellishments were stitched on undulating waves that created delicate encasings of the female form. Several of the 16 creations were alterations of a process where hand-casted transparent polyurethane (PU) was hand-painted through injection molding. The Dutch designer sculpted her creations in such a way that corresponds to the essence of haute couture – they are true works of art that come alive with each passing movement. Cast in hues of nude, grey, and black, the collection showcased one piece that resembled a breathing sea anemone. Van Herpen transported us to a realm where the technicality of handcraftsmanship meets anatomical shapes – where flesh and bone swirls with the elegance of fantasy.

Chinese designer Liu Chao presented his first collection for haute couture week, full of sequinned patches and free flowing silhouettes. Presented at the Ritz Hotel at Plâce Vendome, Chao brought a sincere element of street to the world of couture. A standout piece was an asymmetrical navy blue skirt with a canary yellow pocket. Embellished breastplates and bomber jackets perfectly coincided with eccentric dresses. A fun and surprising collection, Liu Chao is definitely one to watch.

Titled Première Cinétique, Julien Fournié‘s collection was ripe with painterly strokes on gowns and colour blocking on skirts. Black 3D laser cut garments juxtaposed hot pops of orange silk blazers and trousers for a summery chic Miami Vice aura. Garments were slashed and cut to reveal skin in the most surprising ways – an asymmetrical jumper, a deep-V royal purple gown, and bustiers galore. This season, the Fournié woman is bold and brazen, ready for whatever may come her way.

John Galliano’s collection for Maison Margiela was an astounding creative success. Through the opening outfits of bombastic deconstruction, to the silk that was woven in and out of the designs, there was a feeling of harmony and inventive sophistication. “This collection is about adding filters, but as much about removing them and sharing as about connecting with a community, becoming part of a union and relating through mutual emotions rooted in memories,” Galliano stated. Those unions became apparent in the strings holding garments together. There were also painted, printed, and embroidered words, ambiguous and fragmentary, as if the designer had gone back to his roots in the unfinished and undone. The most stunning look was a tall South American-style felt hat above an ivory coat, draped in sheer black chiffon that etched a face of a woman.

Elie Saab tapped into an Egyptian inspiration this season with elegantly draped gowns and sandy gold embellishments. Almost everything was belted and a soft colour palette of nude, sky blue, and cream dominated the scene. Saab, the master of all the glitters and shines, crafted the ideal Egyptian goddess full of grace and dignity.

Drawing from their technique of of recycling fabric from old collections to construct new pieces, Viktor & Rolf have reapplied their savoir-faire from last autumn to this season. For spring, they’ve taken apart old, damaged party dresses from as far back as the ’40s. The gold that emerged in several looks alluded to Kintsugi, the Japanese practice of repairing pottery in a way that highlights the cracks. Titled Boulevard of Broken Dreams, Viktor Horsting and Rolf Snoere’s message of repair is meant to be hopeful, far-reaching even. “All the fragmented pieces can be put back together again.”

Dutch-Vietnamese designer Xuan-Thu Nguyen invited guests to traverse three different sites, presenting a sensorial experience to accompany the showcase of his new collection. Encased floral specimens of pastel ruffles and voluminous forms composed the first scene, titled Implosion. We were guided to the next room, Drop, where water cascaded on two models, one wearing an exquisite black jumper. Finally, fantastical pieces were highlighted in Reflection, a room projecting colors on the multilayered garments. Fabric flowed in an unorganized manner to demonstrate the beauty of chaos. Sweetness was tamed, the perfect made imperfect. 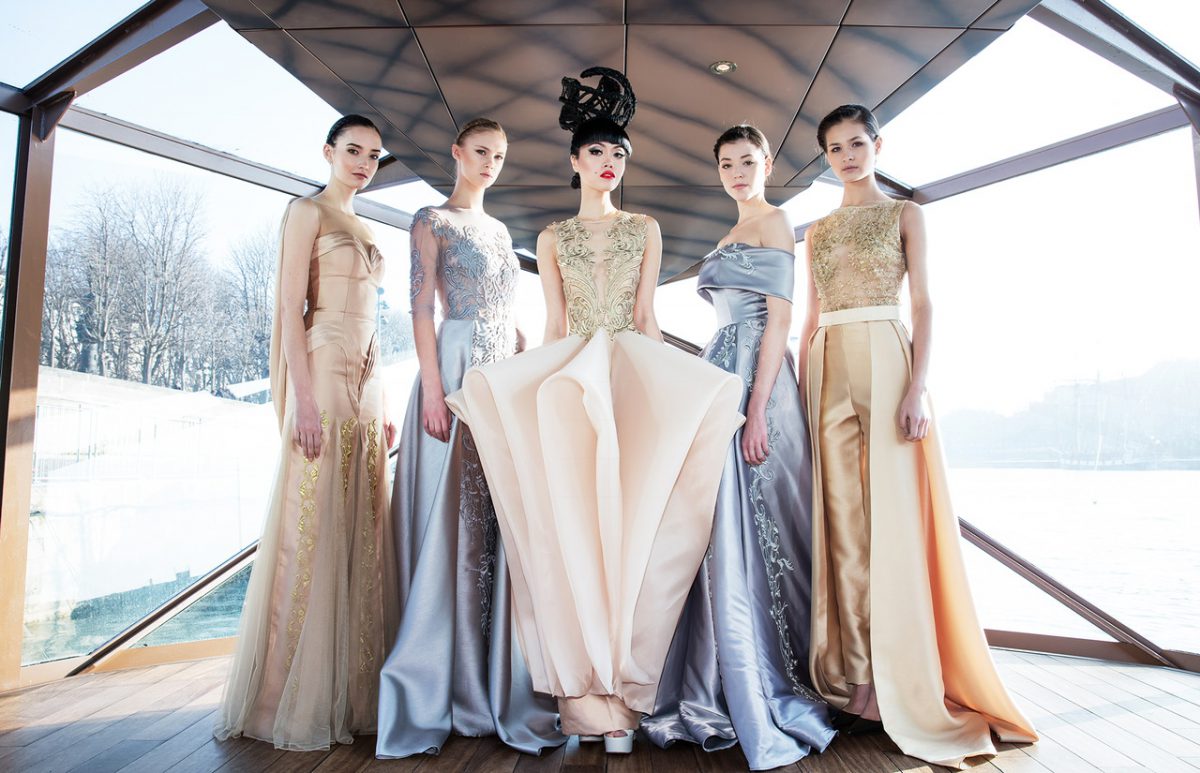 Jessica Minh Anh electrified the Seine River today with an elegant haute couture performance on a giant glass boat ride, utilising Paris as the ideal backdrop. The model, entrepreneur, and fashion show producer created an illusion that the models were divine creatures walking on water as the Bateau Mouche transported everyone down the river for a tour of the city. The Eiffel Tower, Notre Dame, Grand Palais, and Musée d’Orsay became part of the show. During the J Winter show, several designers from the United States and Asia featured their collections: Johanna DiNardo, Maria Ruth Fernanda, Fetty Rusli, Emmanuel Haute Couture, and Sari Lazaro.

Designers Galia Lahav and Sharon Sever of Maison Galia Lahav closed haute couture week with a Victorian Affair full of lace and seductive feminine silhouettes. High collars, medallions, puffed sleeves, and long trains of lace in nude and gold were some of the romantic details incorporated in this collection. Daring V-cuts and bare backs painted a dark and seductive female force. The looks seemed to be portrayed exactly from drawing board, inky creatures that successfully marry the sophistication of antique with the sexy of modern cuts.