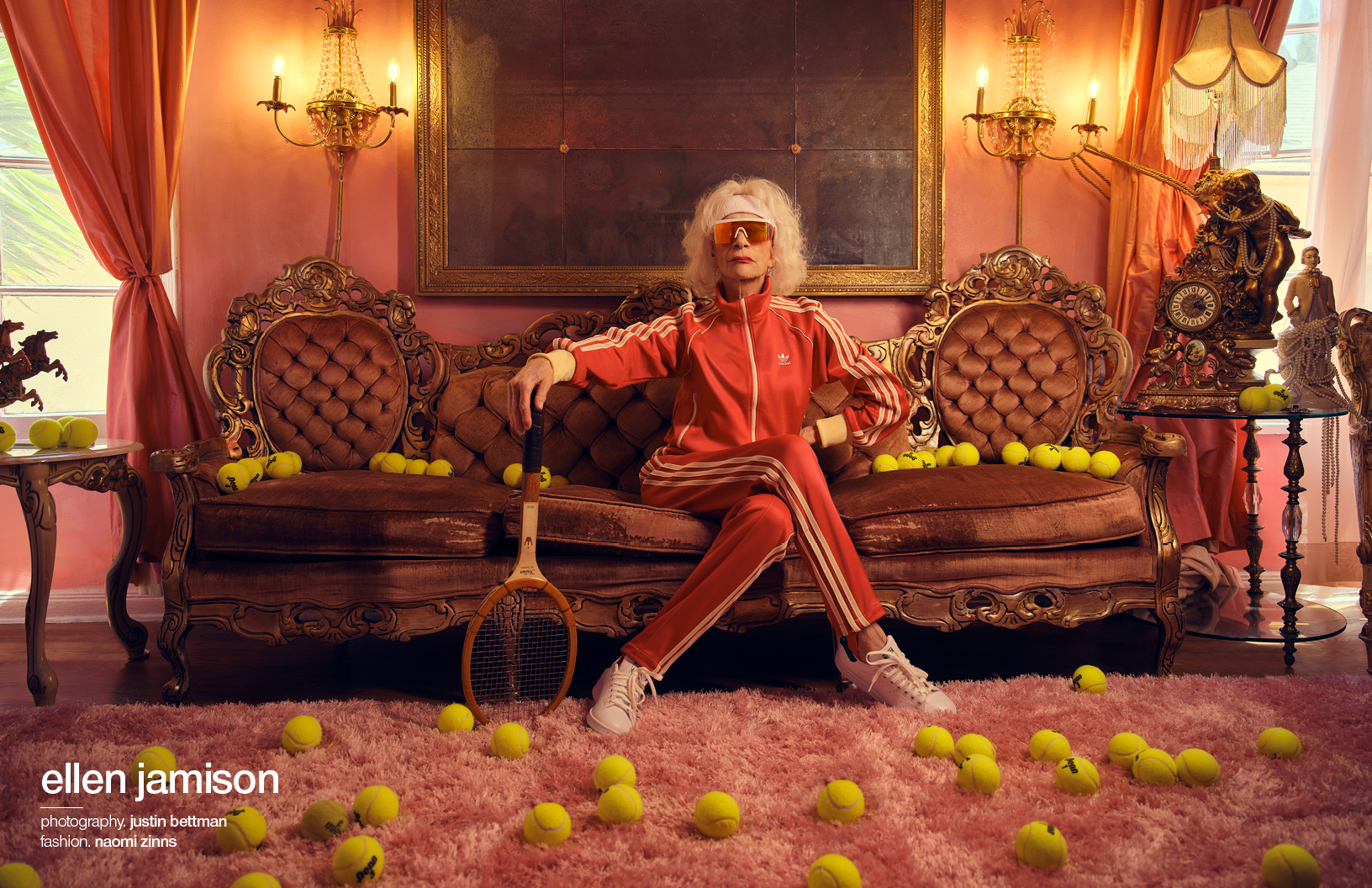 Youth is a state of mind. In this new series by photographer Justin Bettman, the playful energy of Ellen Jamison is captured in beautiful, vibrant colour — a celebration of embracing life to its fullest at any age. For those unacquainted with Jamison, she’s a woman of unparalleled spirit who began her modelling and acting journey at age 60. Today, she shares her zest for life on her Instagram and wherever she can, which caught the attention of Bettman. The two paired up to deliver this photo shoot, taken at the Ragdoll Pink Palace in Los Angeles. Schön! spoke with Bettman about the project.

What was the atmosphere like when creating these photos with Ellen Jamison? How did you create that atmosphere?

I had worked with Ellen before on a couple of projects and really enjoyed her bright and warm energy. I found this location called the Ragdoll Pink Palace that Carol Chavana created and thought it perfectly mirrored Ellen’s personality. From there, I found a great team to make the shoot happen with Naomi Zinns pulling a ton of incredible wardrobe looks and Lauren McGrath and Mariana McGrath tackling the hair and make up.

How did you select the location, and how did it influence the shoot?

The photos were taken at the Ragdoll Pink Palace in mid-city Los Angeles. Carol Chavana created the space over the past few years. The space is so vibrant that every corner offers something different that at first it’s almost overwhelming in a magical way. I ended up choosing a look that fit for each setup and decided to go from there! 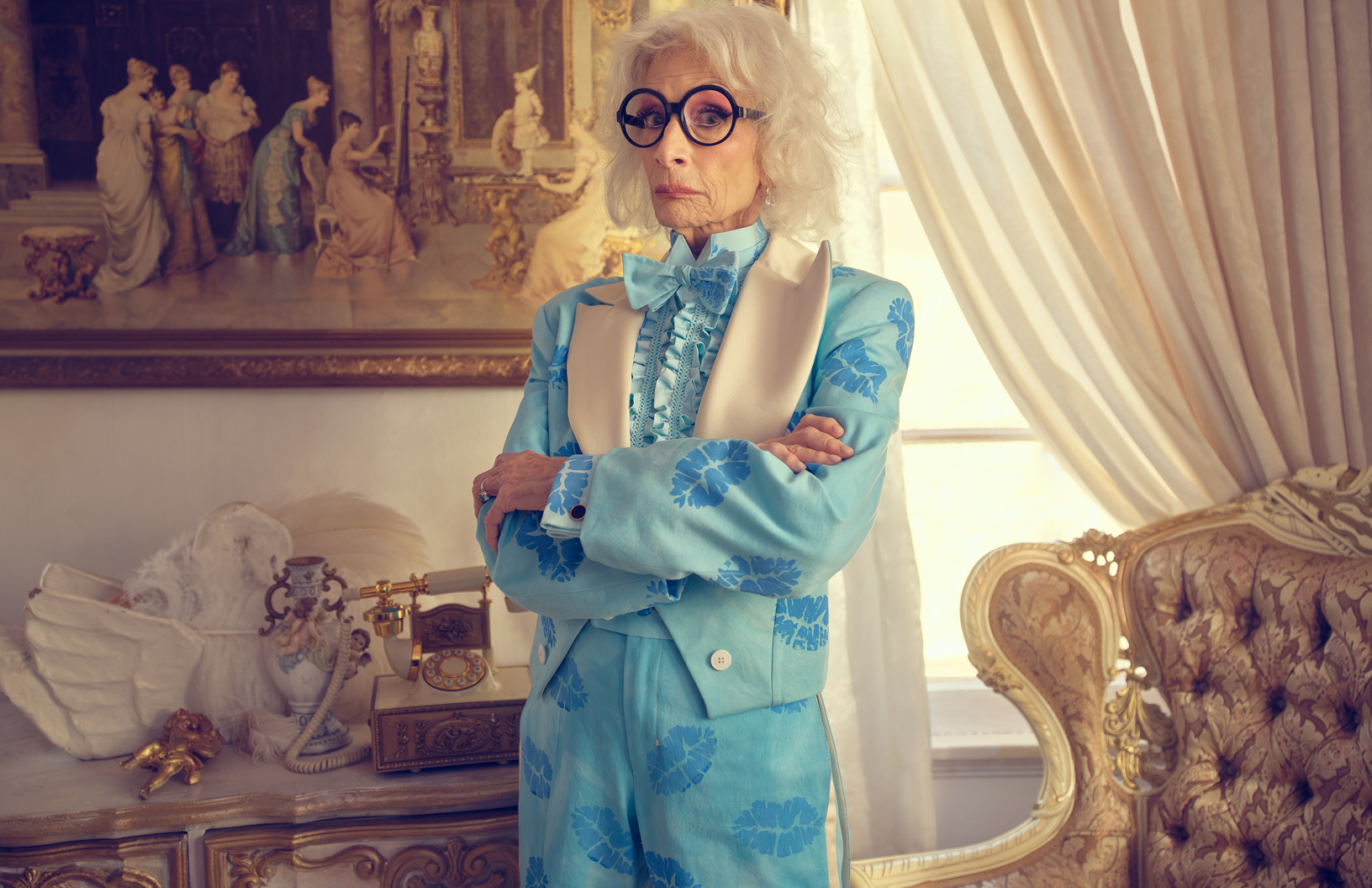 What was the inspiration behind the set design and fashion styling?

I think a lot of people associate growing older with becoming more mundane, but Ellen is living proof that it doesn’t have to be that way. She is so positive and full of energy (more than anyone else on the shoot), and I wanted the set design to capture her energy. I sent Naomi inspirational references for bright and colorful styling direction and she provided an incredible selection — I think we had over a dozen options to choose from on set. At the end of the day, I aimed to create photographs that illustrate that age is just a number.

Could you tell us more about the props used in the photos, such as the tennis racket and balls, the magnificent cake and the book? What was the idea behind incorporating these elements for the shoot’s storytelling?

I wanted to illustrate that age doesn’t have to limit who you are or what you do. For a long time, I really feared growing up and getting older, but if you take care of yourself and have the right mindset, I think you can do the activities you like as long as you’d like. It’s wild to me that Ellen didn’t start acting and modelling until much later in life and that she seems so natural and comfortable doing it. The tennis racket and balls was an idea that I had in my head for a long time that I was excited to finally execute on. Usually when you think of tennis, it’s a really clean and sterile environment with lots of whites and greens and usually younger subjects. I wanted to flip this notion on it’s head and show tennis as a flamboyant and bright environment. The cake was also an idea that I had been wanting to shoot for a while. Usually once you get to about 12 years old, you stop putting a candle for every year old you are on your cake. I thought visually it would look wild to have 90 candles on a single cake. It ended up getting super hot since the candles all burned together and the wax went crazy! I think I had about 10 seconds to get that shot. 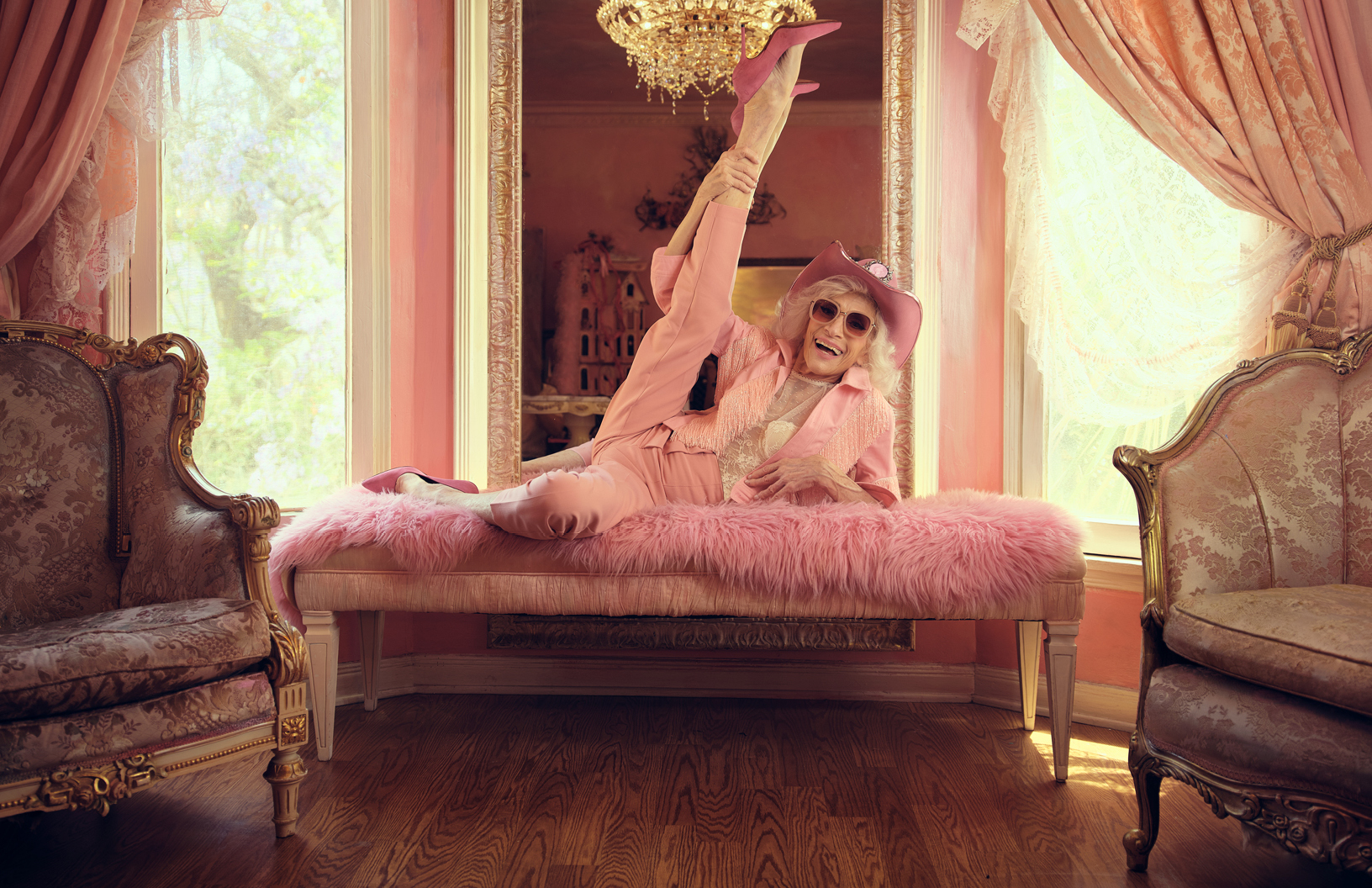 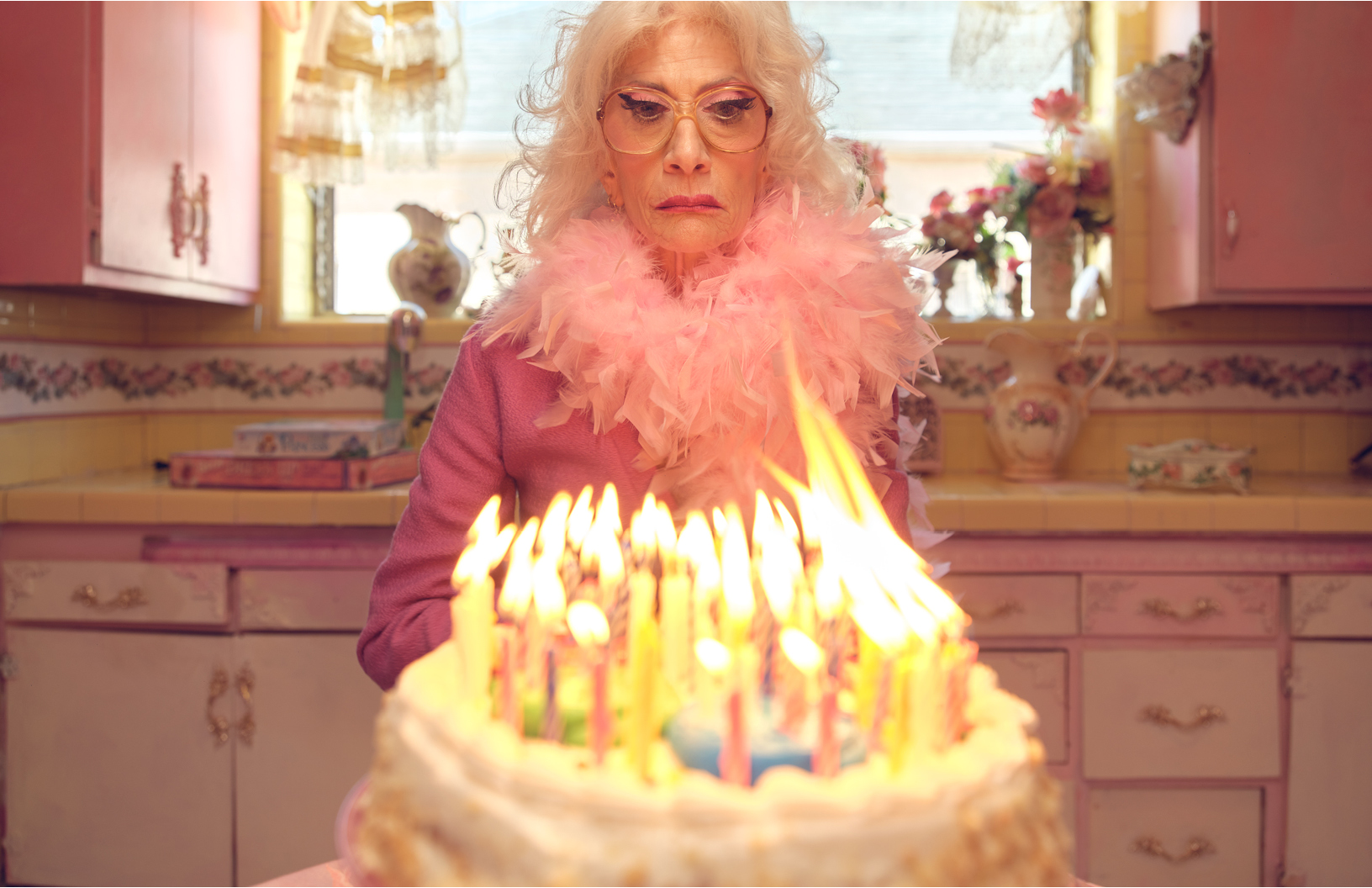 What kind of visual research did you conduct for this shoot?

Visual ideas come to me from all different aspects of my life, from movies that I watch to scenes that I see play out while I go for a run. Elements of this specific shoot were inspired by some Gucci campaigns that I had seen with older subjects.

How did Ellen Jamison create the poses? Did you both have an idea for the overall mood beforehand?

I did have an overall mood I was hoping to achieve beforehand, and Ellen is one of those people who just gets into character as soon as you put her in front of the camera. There is an insane video of her kicking her leg up in the pink cowboy hat. She later asked if I wanted her to do the splits. She’s just an overall legend.

Lastly, what energy or message was most important for you to communicate through these images?

I wanted to communicate that older age doesn’t have to limit the activities or style you have. I find when photographing older people that they have even more personality and energy than some of the younger folks I work with. They seem comfortable and confident in their own body, and I strived to provide an environment and capture images that displayed that exact enthusiasm for life. 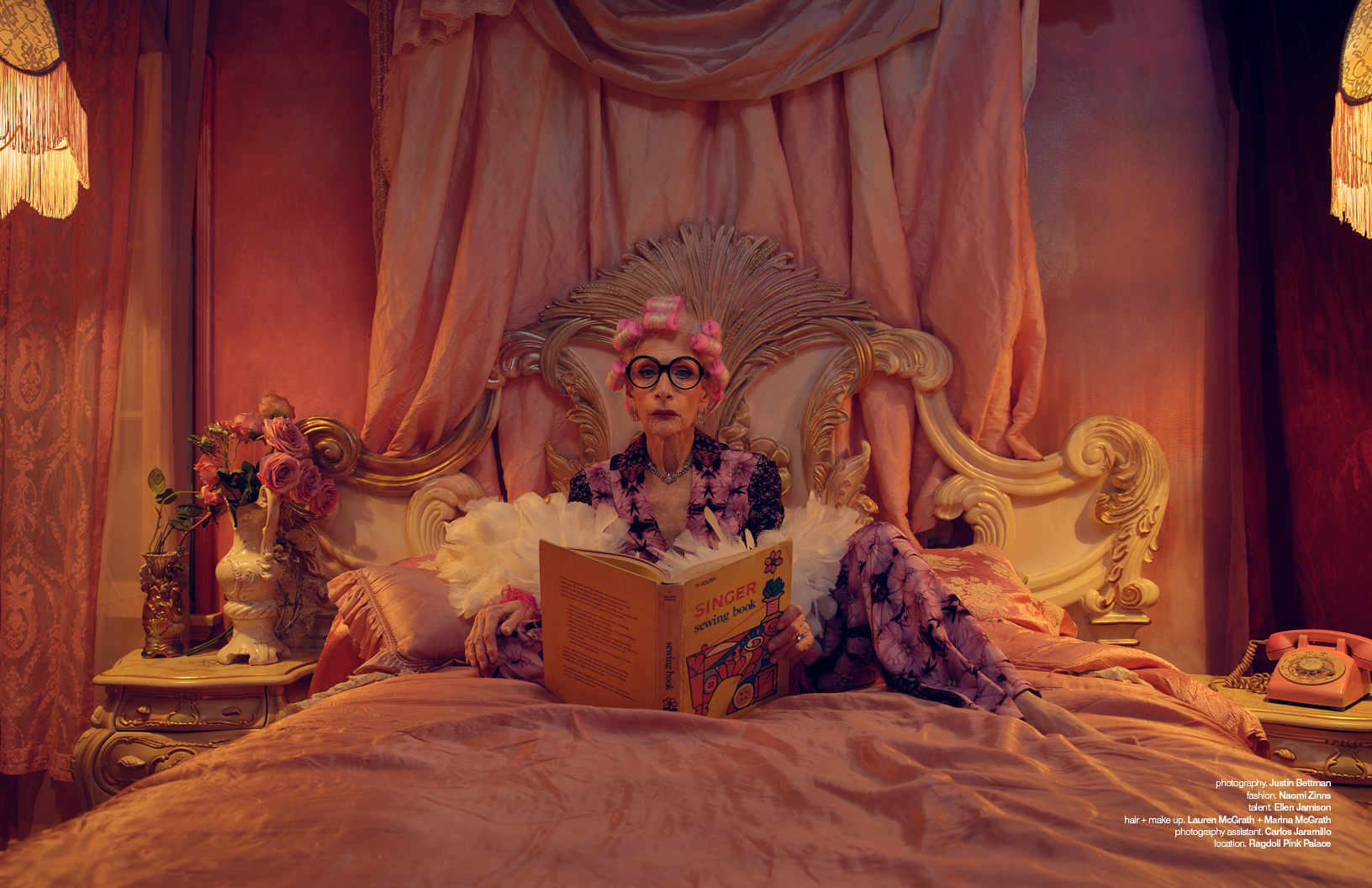